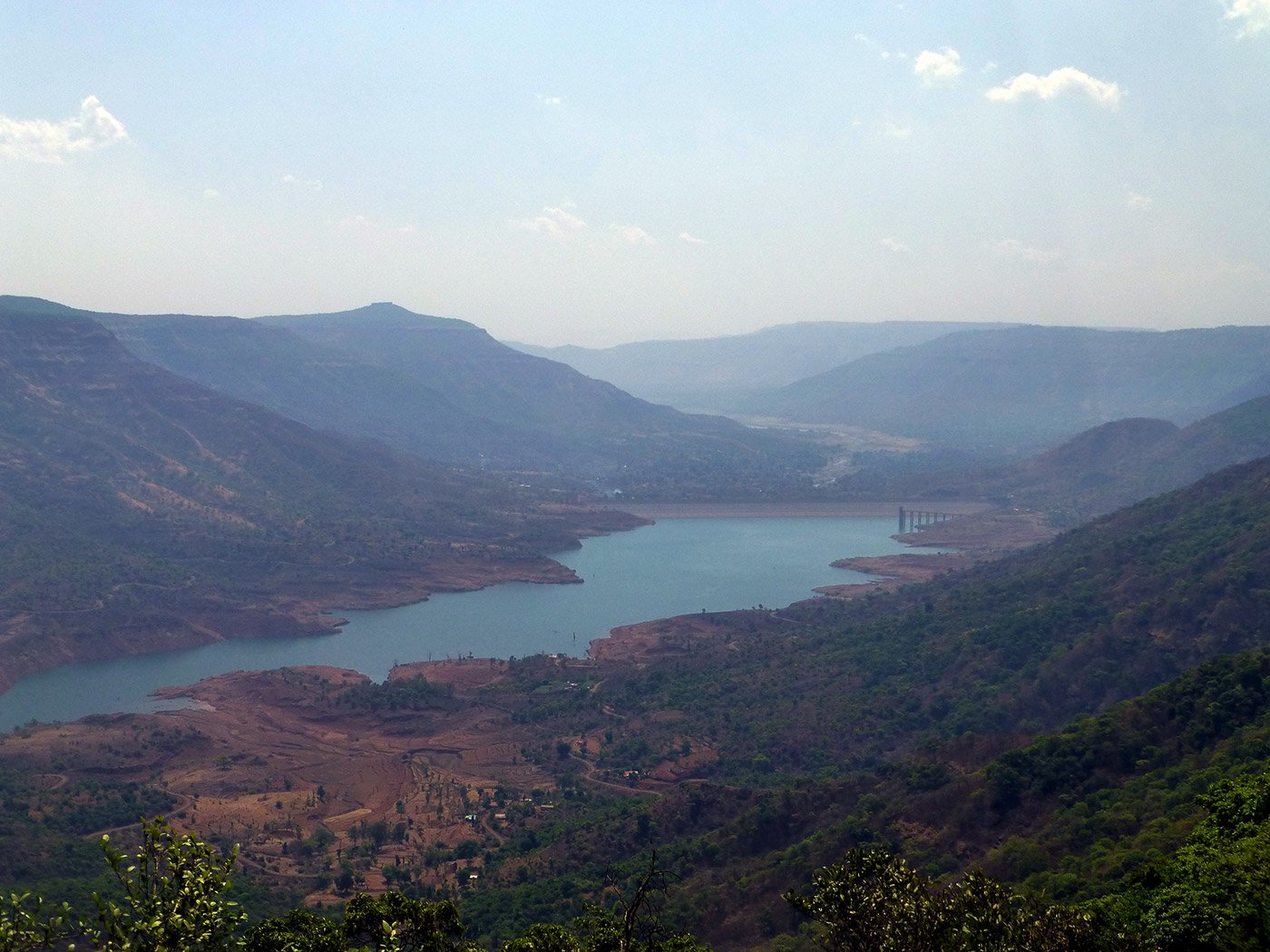 Source of the rivers, scams of the rulers

Why rivers run dry while money floods the system in Maharashtra. A journey downstream the Krishna river

He is a strawberry farmer in his late 70s. The dug well on his three acres in old Mahabaleshwar is stone dry. His wife and he struggle to keep the farm going. They manage to, as there is still some water in their borewell. But even that little he shares, free of charge, with the temple bordering their land. The severe drought hurts his yield but not his generosity. His name is Yunus Ismail Nalaband – and he gives that water to the Krishnamai temple, the oldest symbol of the source of the Krishna river in Satara district, quite cheerfully.

“Is it really my water?” he asks. “It all belongs to the uparwala [the almighty], does it not?” His wife, Roshan Nalaband, also in her 70s, nods approvingly. They’re both packing their strawberries in little boxes. “The traders will come by to pick them up,” says Roshan. “The prices are higher this year because of scarcity, but that is offset by a poorer yield and lesser quality of crop.” They speak, without pausing at work, of the way the water crisis is hurting them. Only Roshan breaks off for a minute to give us some water and offer us further refreshments.

The kunda (temple tank) at the Krishnamai is empty except when it gets water from the Nalabands’ borewell. The tank went dry this season. The Krishnamai is just a few minutes’ walk from the more-visited Panchganga temple, also regarded as the symbolic source of the Krishna and four other rivers – Koyna, Venna, Savitri and Gayatri. Their actual sources are not too far from here. The Krishnamai itself is probably the oldest temple in the Wai-Mahabaleshwar region. A beautiful little one, seen by locals as the home of the river goddess. 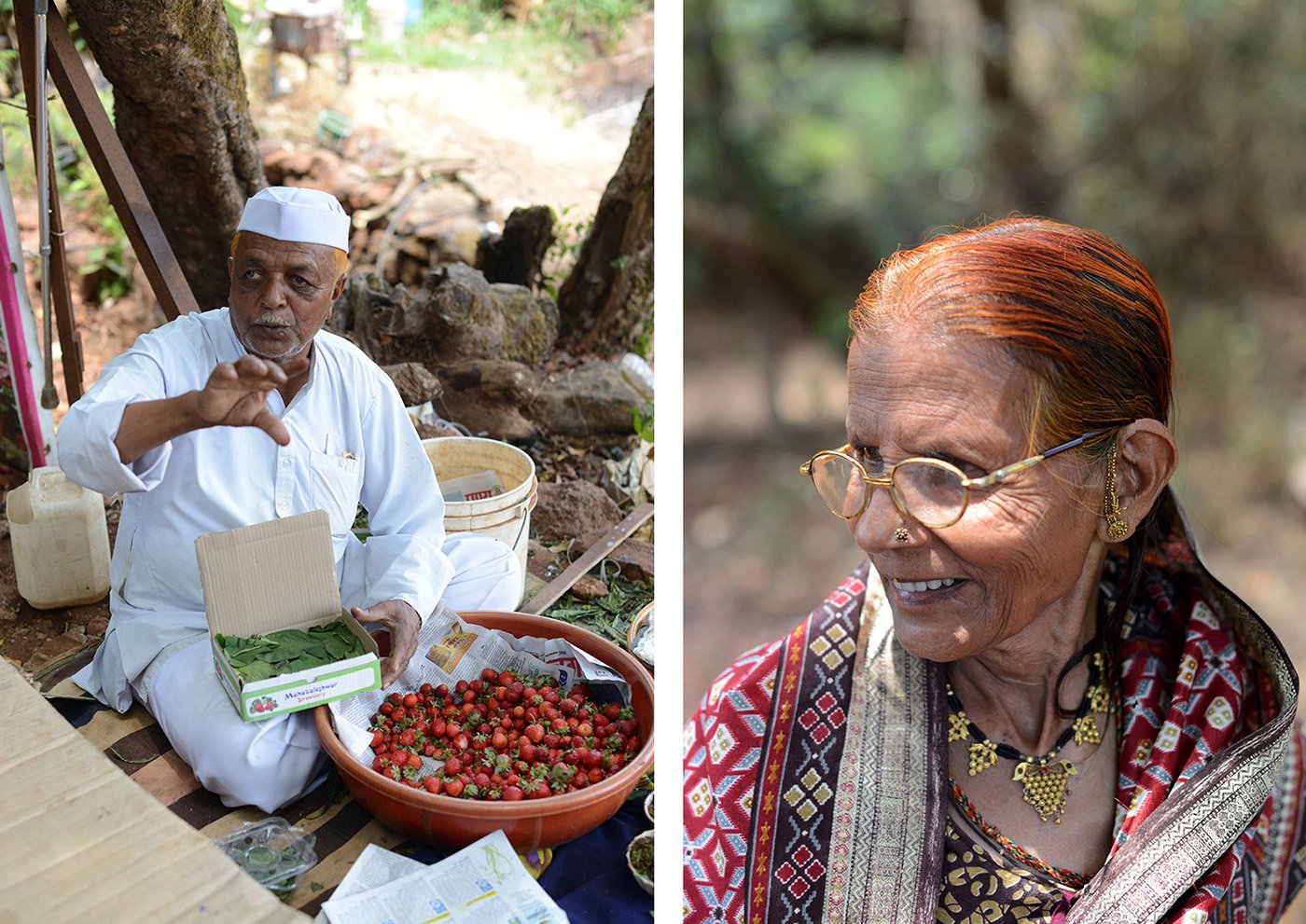 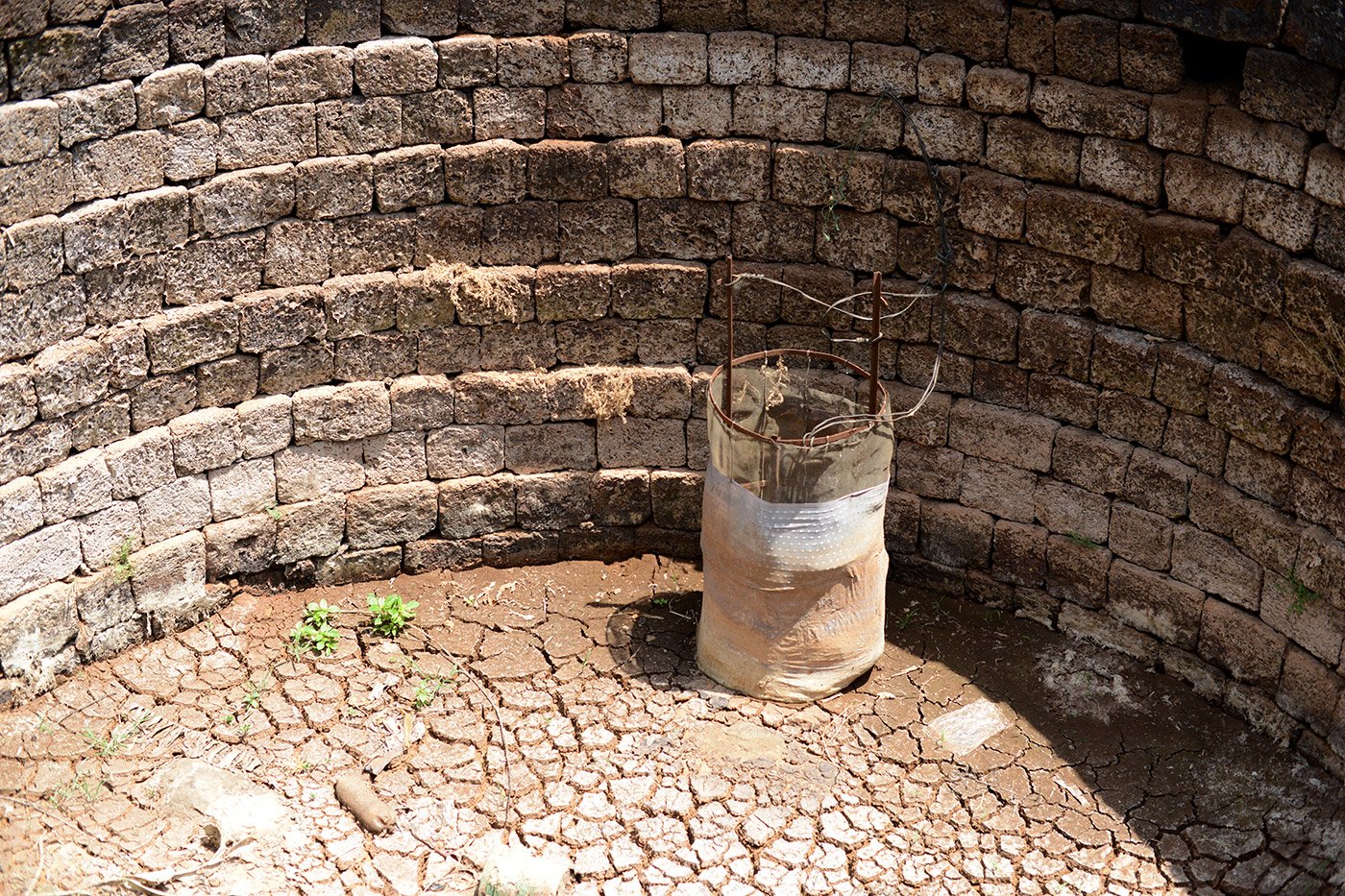 My friend and colleague Jaideep Hardikar and I, together with other journalists in each of the districts we visited, went to the source – symbolic or actual – of several rivers in Maharashtra in the month of May. The idea was to journey downstream each river and talk to farmers, labourers and others living along these routes. To listen to them speak about how the mega water crisis – much larger than a meteorological drought – is affecting their lives.

While it is normal for some parts of rivers to run dry in summer, this is now happening even in their source regions, along stretches where they have never dried up. “Maharashtra’s once perennial rivers have significantly been converted into seasonal ones,” says Prof. Madhav Gadgil, who headed the Western Ghats Ecology Expert Panel. “Amongst the reasons for this have been large-scale damming and a host of other activities along the course and basins of these rivers,” says the leading ecologist and writer.

“In six decades, I have not seen the kunda of the Krishnamai empty and dry,” says Narayan Zade. That’s in a region with an annual average rainfall of close to 2,000 mm. A retired tourist guide and migrant worker, Zade spends his days sitting around this temple. He is clear though that the drought isn’t just about the rainfall. He says tourists and outsiders – “you people” – have much to answer for.

“Of course there has been major deforestation,” he says. “But not by locals. If one of us here cuts a couple of branches, he goes to jail. But people from outside cut and take truckloads of timber – they get away with it.” While Zade too has worked as a tour guide, he says unregulated tourism has done great damage: “…all those resorts and places have come up” causing further loss of green cover. Now, he prefers the quiet Krishnamai to the Panchganga temple bustling with tourists. 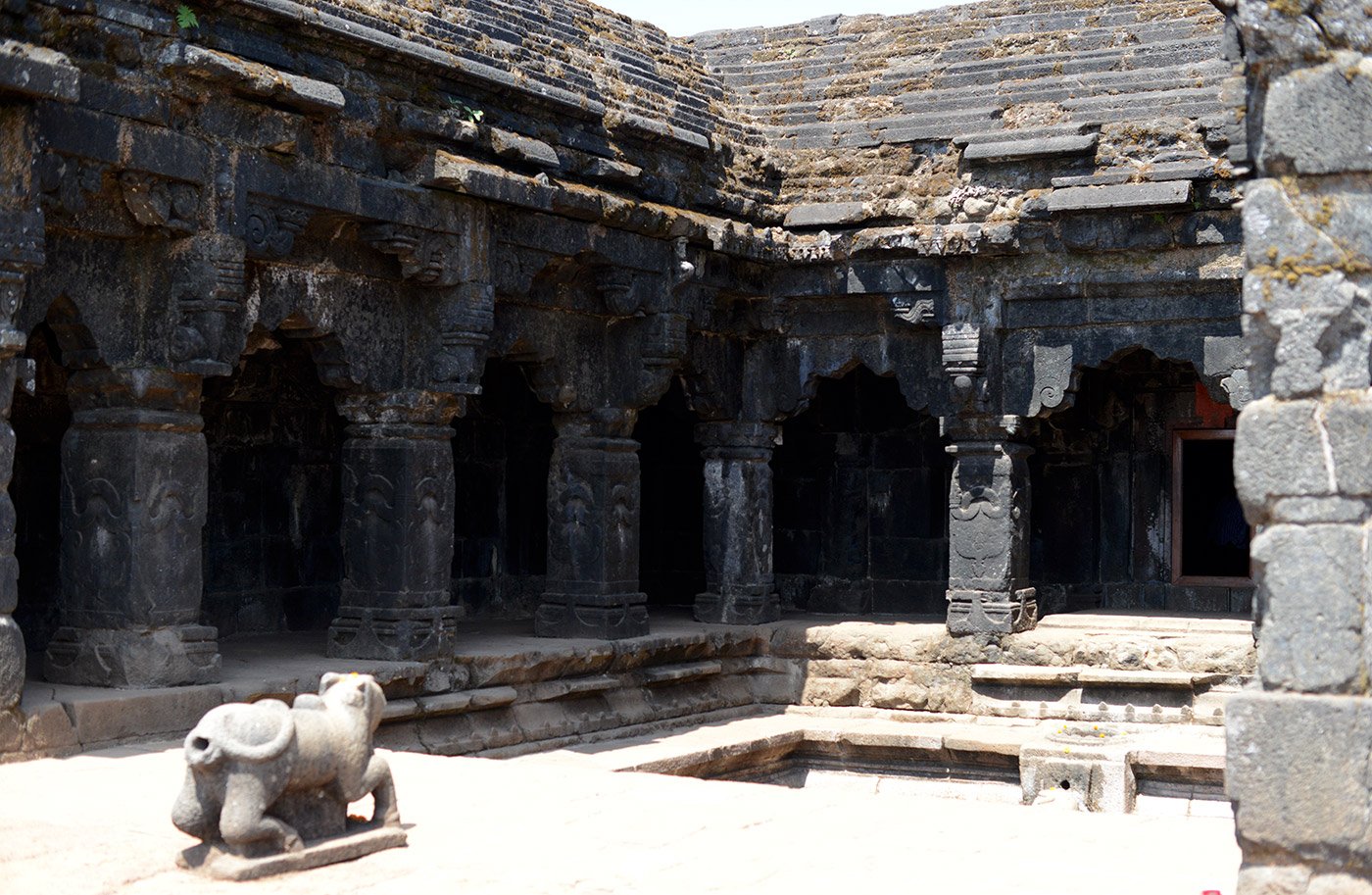 The Krishnamai temple in Old Mahabaleshwar: the little ‘kunda’ in front of it is dry for the first time in living memory

The temple’s front yard has a spectacular spot overlooking the Dhom Balkawadi dam. It still has some water, but much less than it should, even for this time of the year. Years of damming and major diversions of water along the river have had an impact. There is also the chaos of never-to-be-completed lift irrigation schemes. These are at the core of the state’s “irrigation scam”.

Quite a few villages that were meant to gain from those insanely expensive schemes, but never did, are in the Khatav and Maan tehsils of Satara. The Ner dam and lake in that district are meant to supply water, both for drinking and irrigation, to a much larger number of villages, but the supply is mostly cornered by sugarcane cultivators in just 19 villages nearby. Ner is about 80 kilometres downstream from the Krishnamai.

Besides Maan and Khatav, 11 other very dry tehsils here are spread across three districts – Satara, Sangli and Solapur. People from these tehsils confer each year in what they call a dushkaal parishad (drought council). “They are demanding, among other things, a ‘Maan desh’ , a separate ‘drought district’ comprising these 13 tehsils ,” says Dr. Maruti Ramakrishna Katkar, a retired district medical officer.

“Their present districts give them little say in anything,” says Katkar. But how would ‘seceding’ to form a new district help them? The old districts would be glad to see them go and be even less answerable to them, surely? He puts one of the leaders of the new ‘drought district’ movement, Prof. Krishna Ingole, on the phone with us. Ingole says the shared interests of the people in that region bind them together and districthood will enhance their bargaining power.

“These tehsils are about 1,000 feet above sea level and in a rain shadow zone,” Katkar says. “We have less than 30 rainy days annually. All our areas have seen major migrations. There are gold and jewellery workers among the migrants who send back remittances that keep the local economy going.” 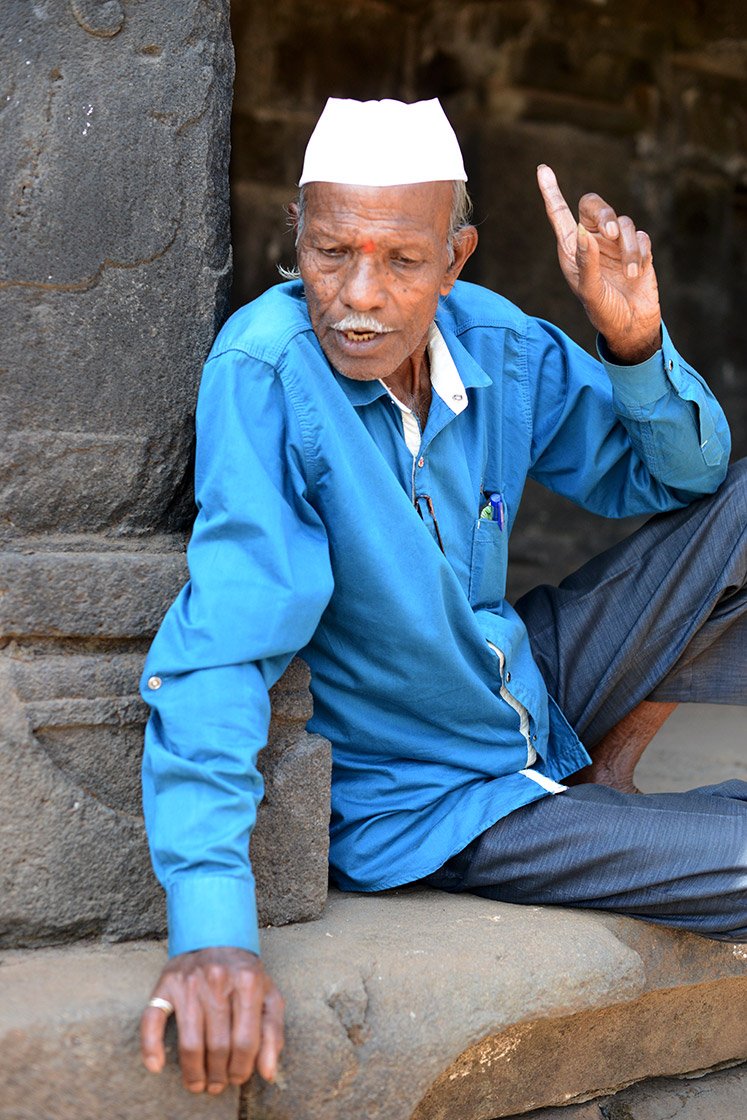 Narayan Zade at the Krishnamai temple. He blames outsiders –‘you people’ – for deforestation, overcrowding and other activities that add to the water scarcity

The water crisis is not a problem of the last year or two. Nor of a single big drought. It has built over the decades, driven largely by human hand. Why, asks retired irrigation engineer Sharad Mande in Pune, are there no long-term measures to deal with it? He answers his own question: “The life of dams is 80-90 years. The life of pipelines is 35-40 years. That of water treatment plants – about 25-30 years. Of pumping machinery, 15 years. But the life of a chief minister is five years. There is no credit for long-term action. Only for what you do immediately.”

Between 2000 and 2010, official data show, the state’s irrigation potential increased by just 0.1 per cent. That, after spending Rs. 70,000 crores on irrigation during the same decade. Over half of that, going by the findings of the Chitale Committee that probed the irrigation scam, may have been siphoned off on dud schemes.

In Maharashtra, official and Right to Information-accessed data show, the cost of a dam can increase by 500 per cent within a month after a contract for it is awarded. Or by nearly 1,000 per cent within six months. As many as 77 projects have been “under execution” for over 30 years. Cost overruns are bigger than the budgets of some small Indian states put together. 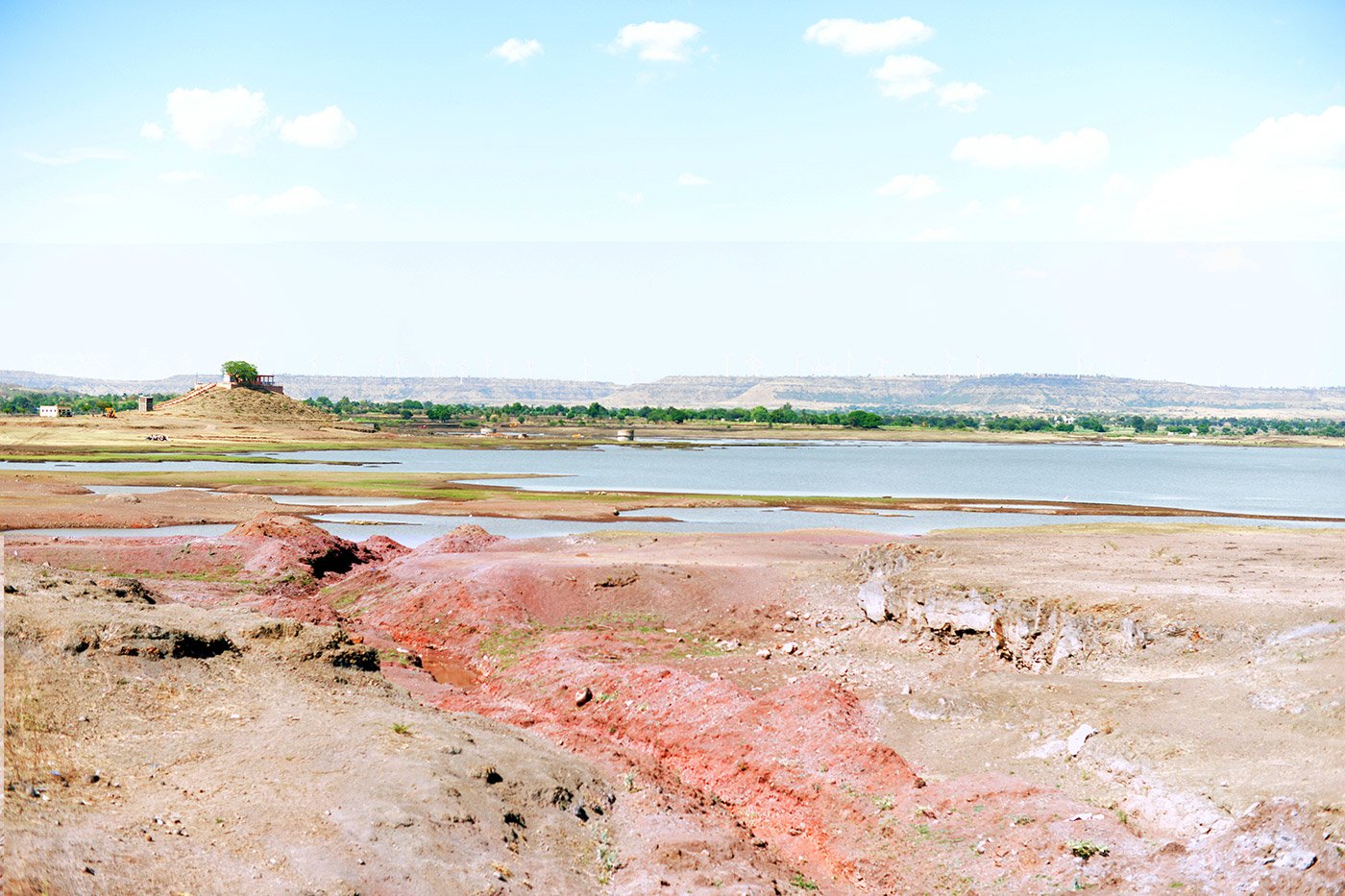 The Ner lake and dam in Satara district: even water meant for drinking is monopolised by sugarcane growers in just 19 nearby villages

Groundwater is also running low in Maharashtra, where 65 per cent of the net irrigation is based on this resource. The state’s ban in April 2016 on the sinking of borewells below 200 feet comes three decades too late.

Even the drinking water problem is far greater than it ought to be in regions along the Krishna river’s course. A lot of water gets diverted to construction activity. There are rural to urban transfers, and agriculture to industry diversions.

Within agriculture, most of the water is monopolised by sugarcane. Even Ner lake water intended for drinking gets diverted to that crop. Two-thirds of Maharashtra’s cane is grown in drought-prone regions. As for the sugar factories, “Please don’t call them that,” Mande grumbles. “They are MLA factories – that’s what they produce.”

Each acre of sugarcane uses up to 180 acre inches of water in a year – that is, almost 18 million litres – apart from normal rainfall. An acre of irrigated hybrid jowar requires barely 10 per cent of that. A lot of people are not attacking sugarcane per se. Just grow it in regions that have the water for it, they say. Not in zones of scarcity. Cane is cultivated on 4 per cent of land, but consumes 70 per cent of irrigation water in Maharashtra.

“This dugwell of ours has never been dry in six decades,” says Yunus Nalaband, back in Mahabaleshwar. He and Roshan continue packing their strawberries. Mahabaleshwar accounts for close to 80 per cent of the country’s strawberry production. The two gift us a few strawberries and even some black mulberry fruit.

Barely a hundred yards in front of us is the Krishnamai temple that they supply free water to. Behind us are the three acres they still cultivate. But with water running out, these may not be, unlike in the nostalgic Beatles song, ‘Strawberry Fields Forever’. 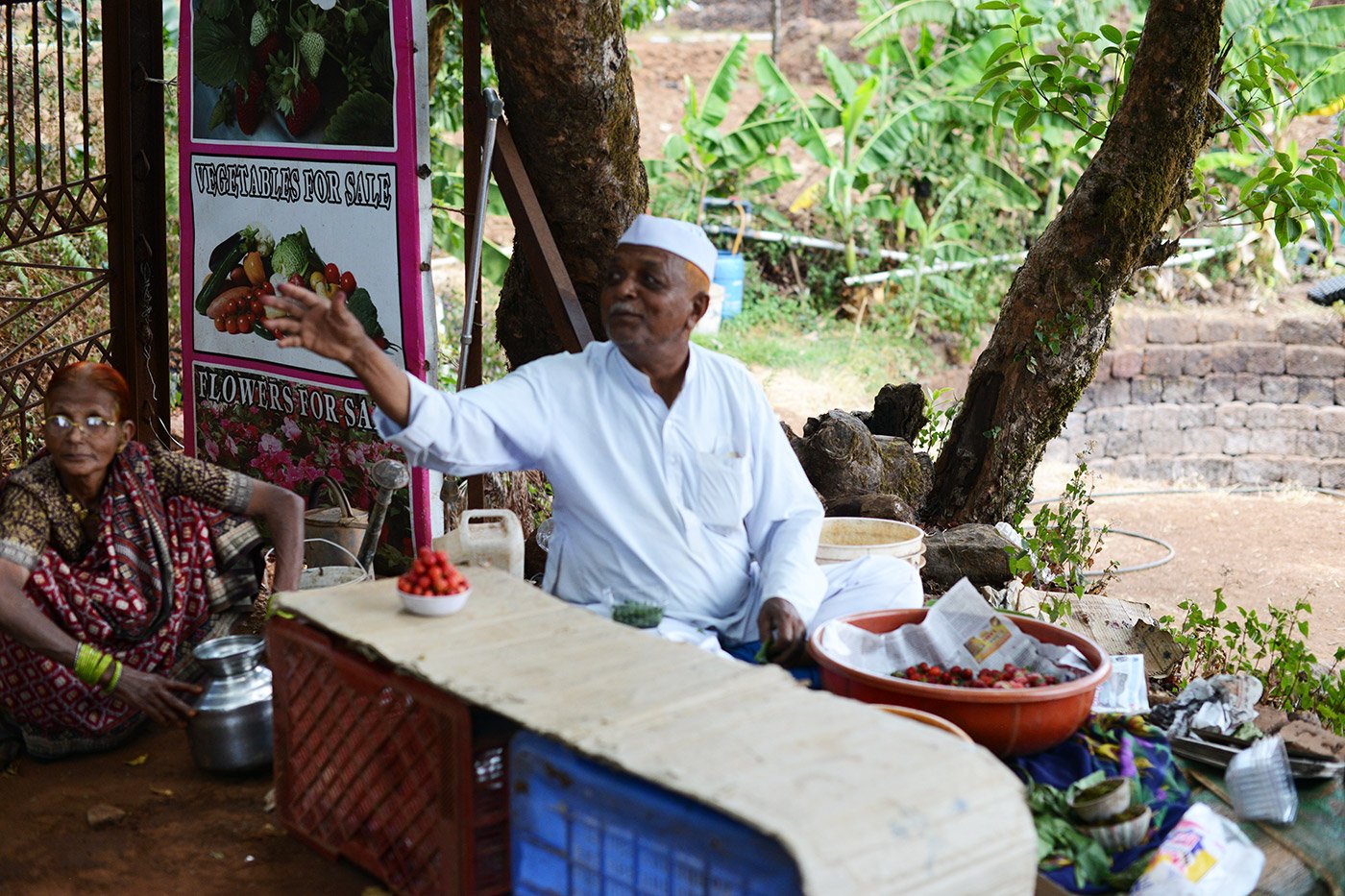 Yunus and Roshan struggle to cultivate in the drought period, but share the little water they get from their borewell with the Kirshnamai temple