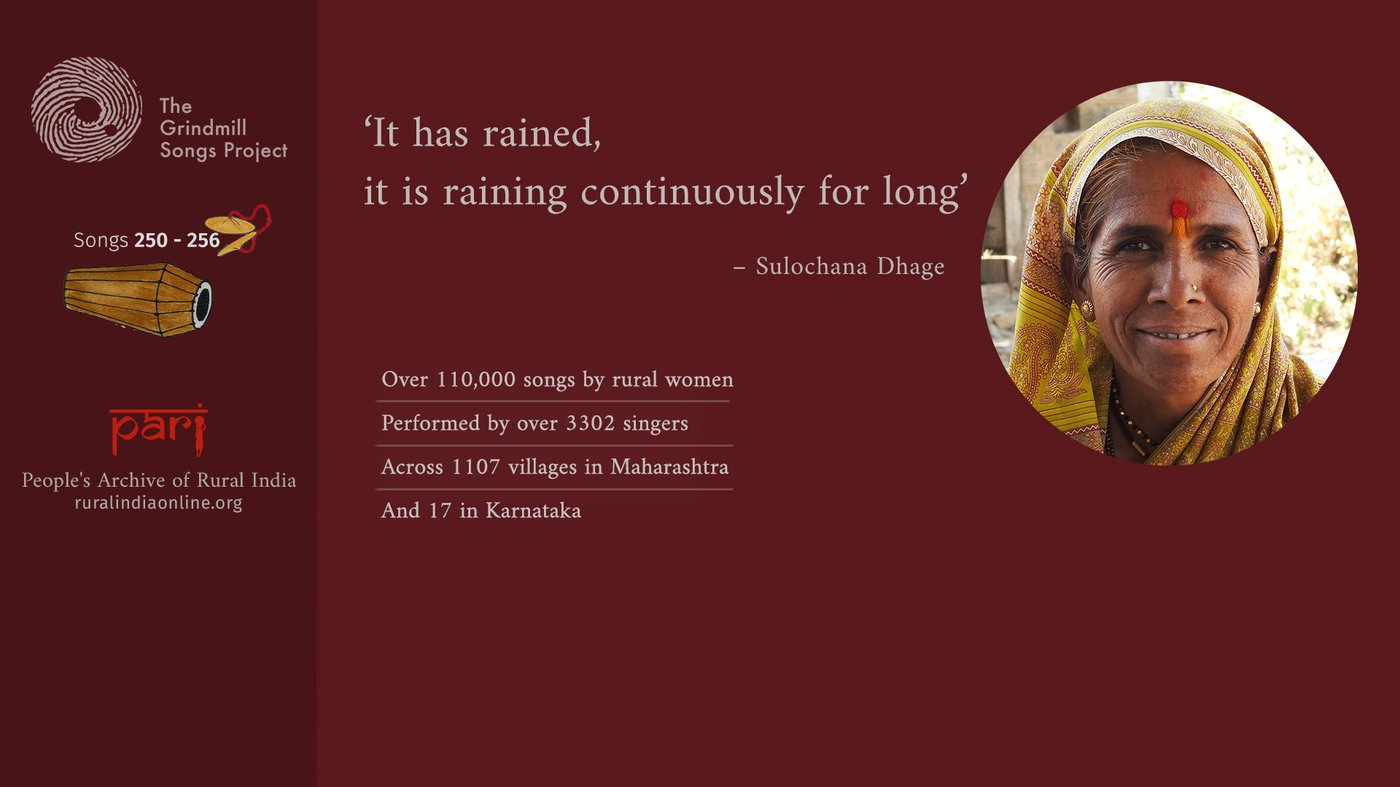 Six songs of rain from Mulshi

Women from the Khadakwadi hamlet sift through memories to sing ovi about rain for the Grindmill Songs Project  – the damp soil and sowing, the fading of a brother’s affection, the pilgrimage to Pandharpur

So sang the women in Khadakwadi, a hamlet of Kolavade village, when we went there on a hot April morning in 2017. Sitabai Ubhe, one of the ovi singers, is now over 60. She is an avid mobile phone user. More than once she breaks away from the group to talk on the phone. I ask her for her phone number and she brings out a small bit of paper with the number written on it in English. 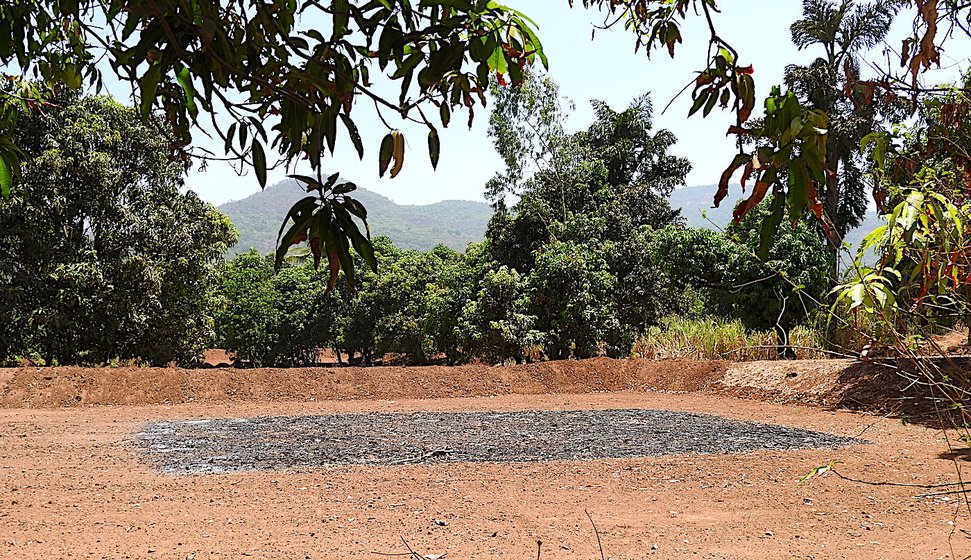 Over two decades ago, the original Grindmill Songs Project (GSP) team had documented examples of this genre at this hamlet. The GSP is now hosted on PARI and the present team periodically visits some of the villages to meet the singers again.

The women in Khadakwadi helped each other remember some of the ovi they had sung years ago. Last year, PARI published Seven songs of summer – with a video of the singers from this village performing ovi about life under a hot summer sun. In this instalment, they render songs of rain.

On our way to the village, we passed fields that farmers were preparing for cultivation by burning patches of land.

When we arrived in Kolavade, Lilabai Kamble, 58, took us straight to the hall in the Ram temple premises. The tin-roofed rectangular hall has a low boundary wall leaving most of the structure open on three sides; a parapet along the wall is used for sitting.

Lilabai then went from house to house to beckon the ovi singers, and six women gathered at the hall, one by one. Many on our list were away, some had died in the interim, and a few are untraceable.

All the women said they still occasionally used the grindmill to make gram flour, rice flour for ghaavan (pancakes),  and to grind turmeric for the haldi ceremony at weddings.

Sulochana Dhage, 45, is the youngest of the women we met in Khadakwadi. She is the daughter of Jhingabai Ubhe, who contributed over 200 songs to the GSP database. Jhingabai, who died a few years ago, spent her last days with her daughter and son-in-law. 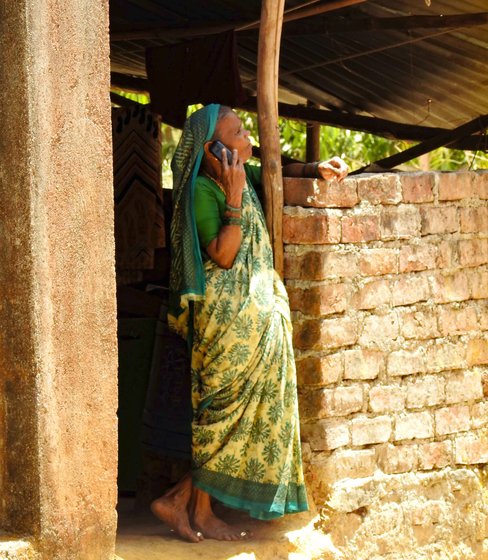 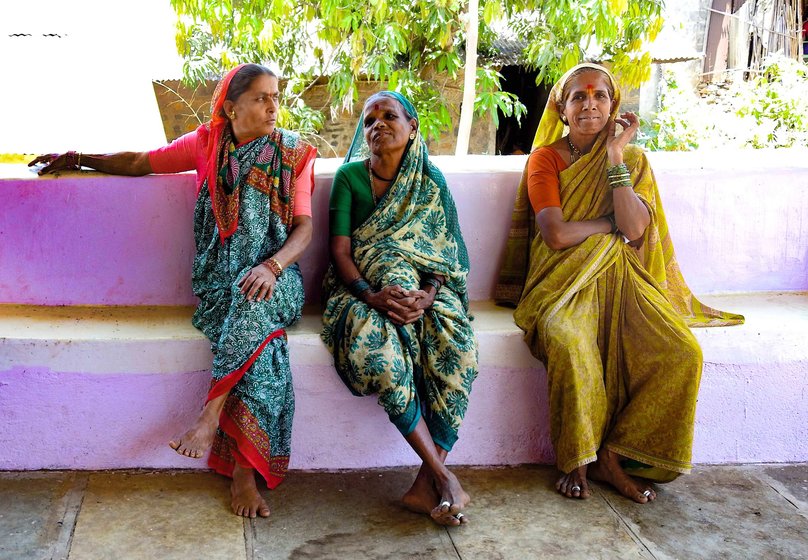 Sulochana told us that she goes for the wari (pilgrimage) every year along with others from the village. “We don’t go all the way to Pandharpur [in Maharashtra’s Solapur district]. We walk for two days, from Alandi to Pune, with the Dnyaneshwar palkhi [a palanquin carrying symbolic silver clogs or footwear] . Or from Dehu to Pune with the Tukaram palkhi. ”

The wari is undertaken twice in the Hindu lunar calendar year – during the month of Ashadh (June/July) and then again in Kartik (October/November). The June/July journey is more popular because it commences after the sowing of crops. Farmers, shepherds, cowherds and others from rural Maharashtra are among the many who go on this pilgrimage.

Sulochana and the others settled in a row, consulting each other, humming and whispering. They were trying to remember the tunes and verses handed down across generations  of women in their villages. They did: six songs of rain and a verse about the wari flowed from the performers.

In the first ovi , the singer tells us that it is raining continuously and her son is cultivating the field, sowing rice with a drill-plough. In the second ovi , the son is sowing wheat. Let it rain, they sing in the third couplet, let the land become wet, let the women carrying lunch baskets reach the fields.

The fourth song compares the downpour and the dying out of the rain with the changing attachment of a brother for his sisters. It says that when the brother has daughters, he forgets his sisters. The drill-plough, a special tool, the fifth ovi tells us, is used to both turn up the earth and level the land. The sixth of the songs says that just as the soil cannot get moisture without rain, a woman cannot find happiness without a husband.

'Summer rains came and have now stopped. Now that brother has daughters, he has forgotten his own sisters,' sing the women in this video from Kolavade

These songs are followed by a six-line verse.  It begins with a woman telling us that her brother Pavana has arrived in the mango (summer) season. They sing about the wari . When it rains, the pathways become wet and the palkhi arrives. It contains the silver clogs of the poet-saints Dnyaneshwar and Tukaram, symbolising them in their absence. Devotees worship these sandals, which are taken on an annual journey, the wari to Pandharpur. As the palanquins pass through villages and towns, people gather around to offer turmeric and vermillion.

There is a potent sense of piety and divinity in this extraordinary annual event – these lines speak of a unique atmosphere that acquires a special colour. And while the wari is in progress (with tens of thousands of people walking towards Pandharpur), Lord Vitthal, the song says, is dressed in a brocade wrap that suits him well – and is ready to welcome the devotees.

It has rained, it is raining continuously for long
In his fields, my son is sowing rice with the drill-plough

It has rained, it is raining continuously for long
In my son’s fields, wheat is sown with the drill-plough

Summer rains came and have now stopped
Now that brother has daughters, he has forgotten his own sisters

He dug with the plough, he levelled the land with the harrow
The drill-plough was taken to the field as an expert tool

Without rain, the soil cannot get moisture
Without a husband, a woman does not get happiness

Note:*Haldi kunku (also haldi kumkum) refers to the exchange and application of turmeric and vermillion powder on the forehead amongst married women.

**God refers to Lord Vitthal in Pandharpur. ‘Enchanting colour’ alludes to the atmosphere created by the combination of all that is mentioned in the verse. 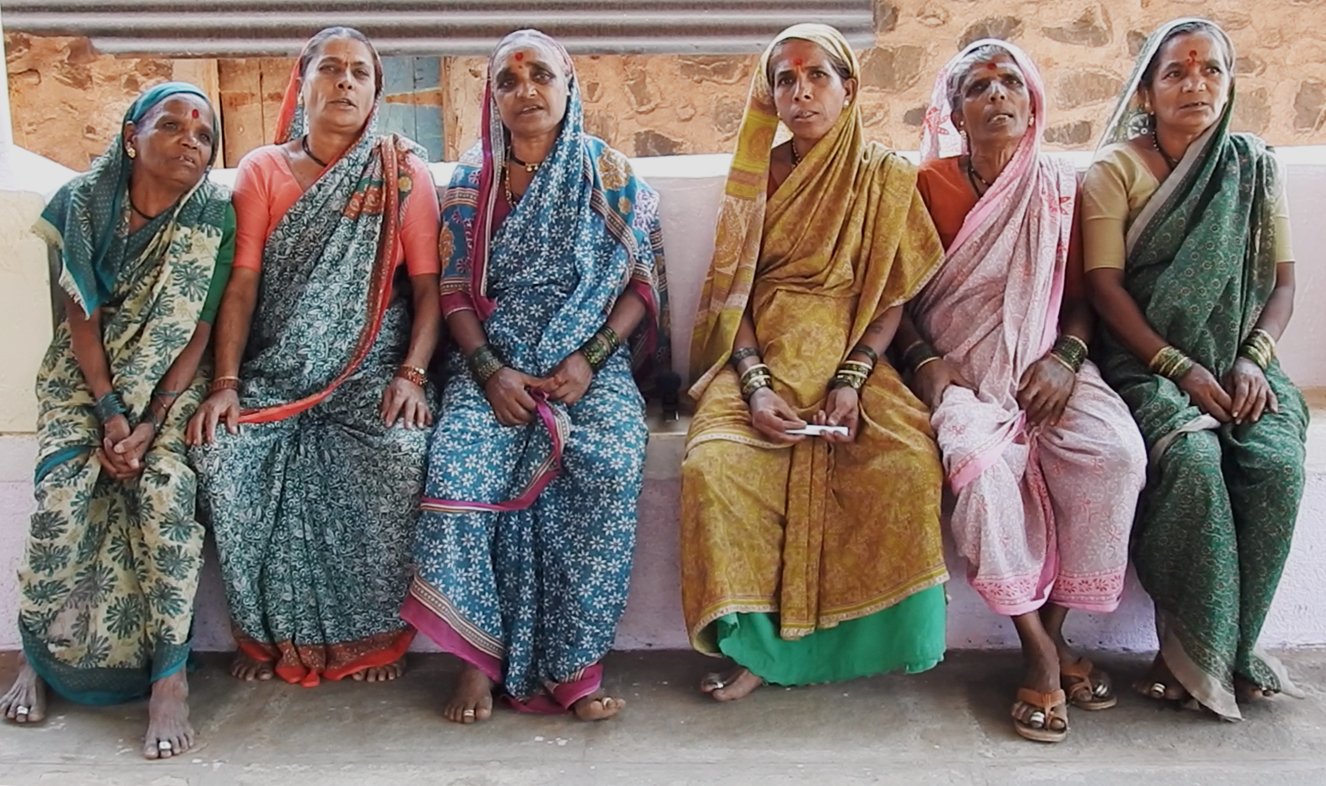 Date : These songs (and some of the information) were first transcribed by the original GSP team on January 6, 1996. The PARI team took the photographs featured here and video recorded the songs on April 30, 2017.