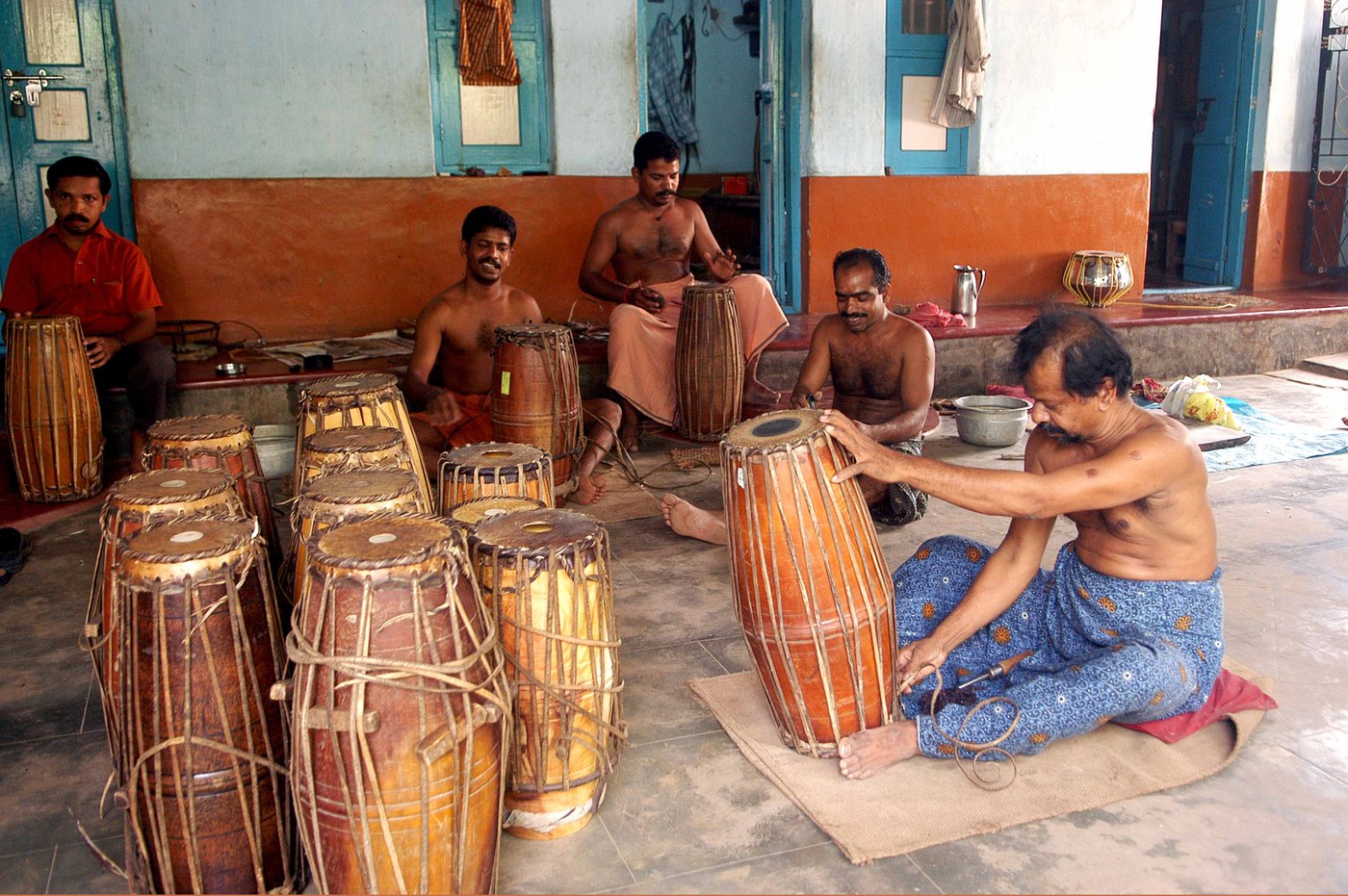 Peruvemba: struggling to retain its rhythm

With no sales in the Covid-19 lockdown, and difficulty in procuring rawhide for their bespoke percussion instruments, the Kadachi Kollan craftspeople in Kerala’s Peruvemba village are missing a steady income

At first sight, Peruvemba looks like a tannery. The skins of animals like cow, buffalo and goat, drying in the courtyards of the village, suggest leather is being processed for sale. But, beyond the yards and inside the homes, the rawhides are transformed into high-quality percussion instruments by craftspeople of the Kadachi Kollan community.

Percussionists from all over south India covet the leather-based instruments produced in Peruvemba, 14 kilometres from Palakkad city in Kerala. “We are not musicians who can play the instruments, but we know the srutis [microtonal units] to make good-quality instruments,” says K. Manikandan, 44, a Kadachi Kollan mridangam -maker. “We make an instrument only after receiving an order. We customise it to the customer’s need. We don’t sell to shops or commercial retailers.”

The Kadachi Kollans of Peruvemba design and manufacture mridangam , maddalam , chenda , tabla, dhol, ganjira and other drums that are mostly used in temple music and Carnatic music. The community has  been making percussion instruments for more than 200 years. Before that, they were metalsmiths who made agricultural tools, says Manikandan. Palakkad’s status as a centre of Carnatic music encouraged the Kadachi Kollans in Peruvemba village, which comes under Palakkad district's Peruvemba gram panchayat now, to switch to musical instruments for a better income.

Later, Peruvemba’s fame spread to the Carnatic music circles outside Kerala, after the mridangam maestro Palghat T. S. Mani Iyer (1912-1981) championed the instruments produced there. He invited musicians from Madras (now Chennai) to visit the village, turning many into permanent customers of the Kadachi Kollan craftsmen. Iyer's own mridangams were made in Peruvemba by Krishnan Maruthalaparambu, Manikandan’s father, with whom the musician shared a close friendship. 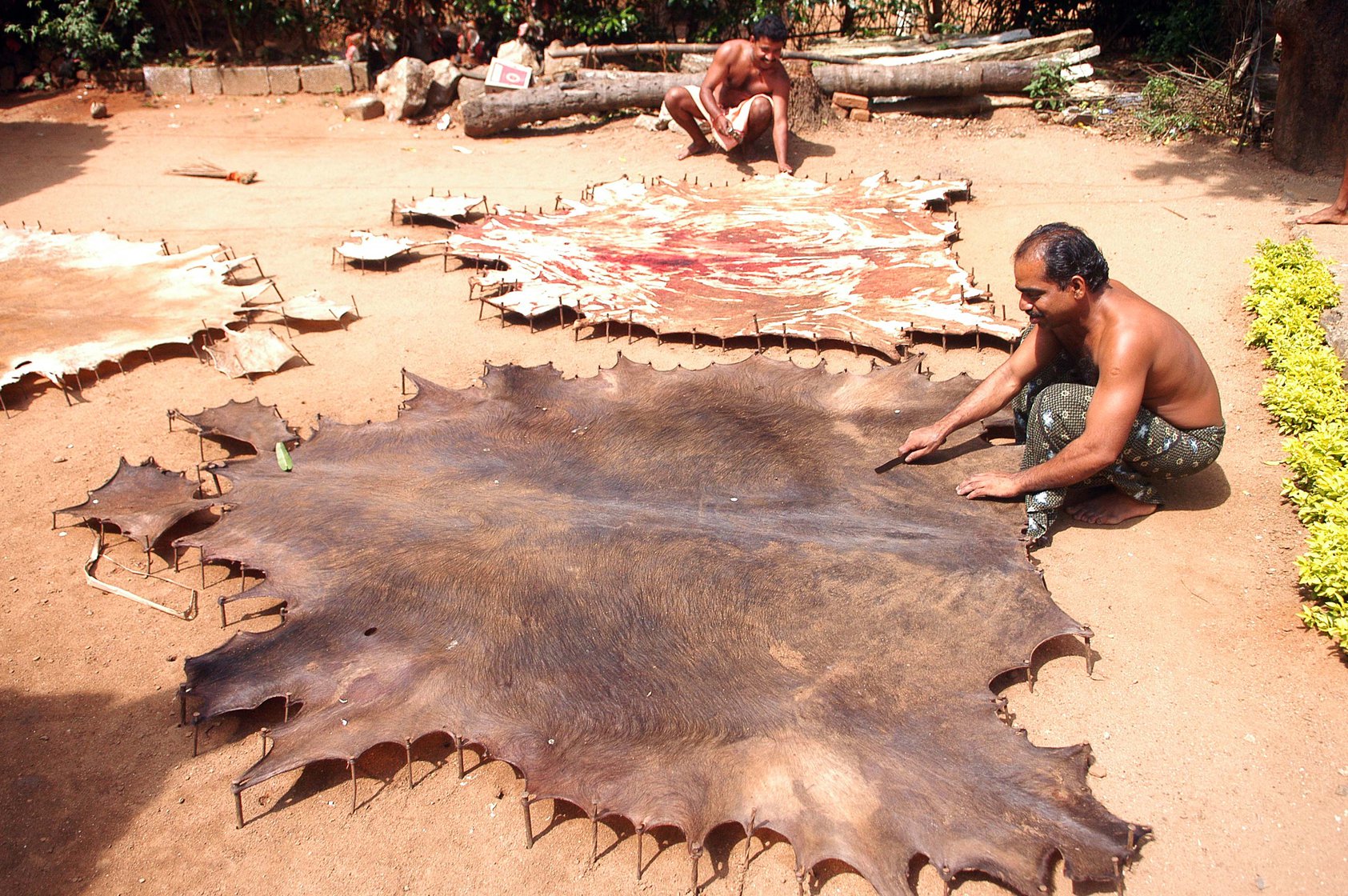 Out of the 320 families living in Peruvemba village now, 80 belong to the Kadachi Kollan community ( gram panchayat records). In 2007, the craftsmen in the village formed a state-level collective of manufacturers of leather-based instruments – Kerala State Thukal Vadyopakarana Nirmana Sanghom. Ever since, the prices of instruments and the rates for repairs and restoration have been decided jointly by members of the collective. They also ensure equal distribution of work among the members. Manikandan is the secretary of the collective, which has 65 members and 114 trainees in the village.

Peruvemba’s craftspeople were earning a steady income for years, from designing and producing bespoke instruments for artistes and institutions. But Covid-19 changed that.

In January 2020, the Kerala government imposed strict lockdowns after India’s first three coronavirus cases were reported from the state. No customer could come to Peruvemba after February, and so no orders were received in summer – the peak sales season.

“The festival season in Kerala is between February and June. Not even a single purchase was made by anybody during this period. There were no enquiries or repair work,” says Manikandan. Held in summer, the annual festivals of temples and churches in Kerala bring percussionists together in large numbers – sometimes up to 500. They perform traditional orchestras like panchari melam and panchavadyam for hours at a time.

The sale of instruments fell significantly during the lockdown. Only 23 instruments from Peruvemba, and all before the lockdow, sold in 2020. “They were only mridangam and tabla , no chenda was sold,” says Manikandan. By comparison, 380 instruments were sold in 2019 – 112 of them chenda , the main drum in a panchari melam orchestra. 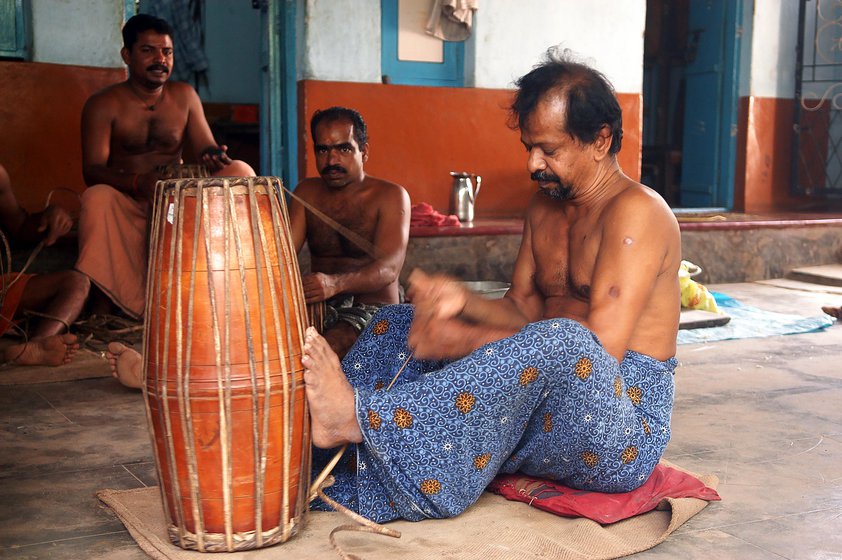 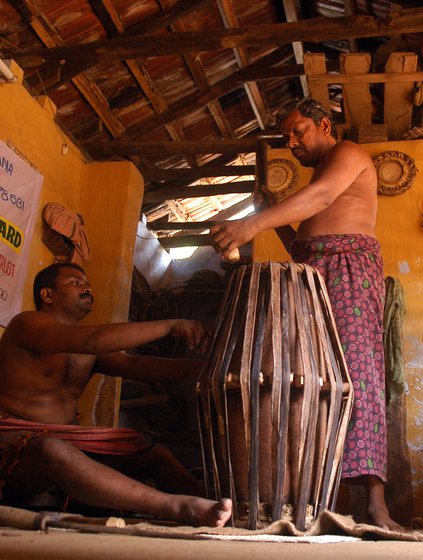 The chenda and shuddha maddalam , which provides percussion in Kathakali dance-dramas, are Peruvemba’s most popular products. A new maddalam usually sells for Rs. 25,000 and a chenda for Rs. 12,000-15,000, says 36-year-old Rajeevan Lakshmanan, who specalises in making maddalam . The craftsmen charge Rs. 12,000 to replace the skin of an old maddalam , and Rs. 800 for tightening and changing the strings. The profit margin is eight per cent on the sale of each instrument.

“The crisis was severe as we had no other solid income to sustain us,’’ says Rajeevan. But farming helped Peruvemba’s Kadachi Kollan families earn some money during the lockdown. Most of them own between half an acre to an acre of land in the village, on which they cultivated bananas and coconuts. The bananas were sold for Rs. 14 a kilo, and coconuts for Rs. 54 a kilo, in the local markets. Some grew paddy for their own consumption.

Even before the pandemic, the instrument-makers had been finding it difficult to source animal skins. The central government’s Prevention of Cruelty to Animals (Regulation of Livestock Markets) Rules, 2017, had reduced the availability of cattle hide. The interstate transportation of cattle was hit because of the rules, and the supply of animal hide from abattoirs in Coimbatore district, Tamil Nadu, completely stopped.

The craftspeople in Peruvemba now depend on the meat market in Puthunagaram, three kilometres away. “Sellers of hides are also in crisis. If the situation continues, we will be forced to stop producing the musical instruments,” says 25-year-old Ramesh Lakshmanan, Rajeevan’s brother. 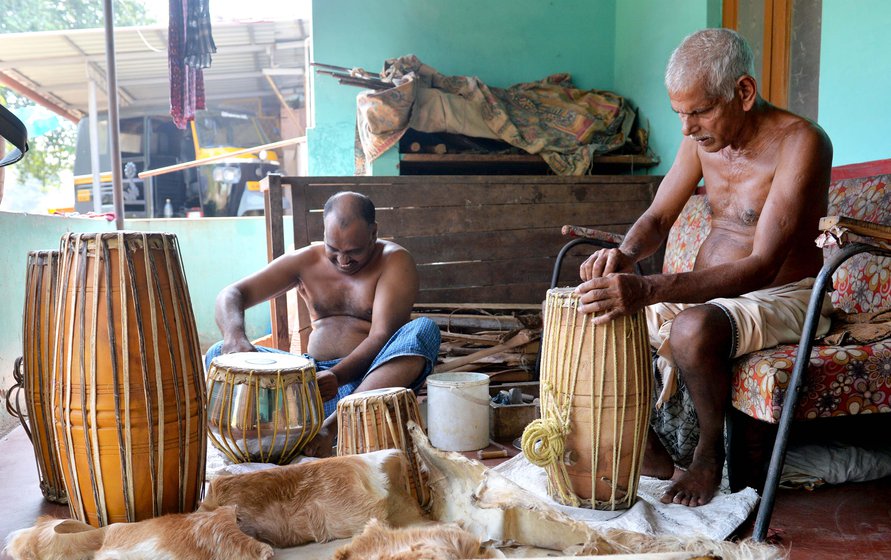 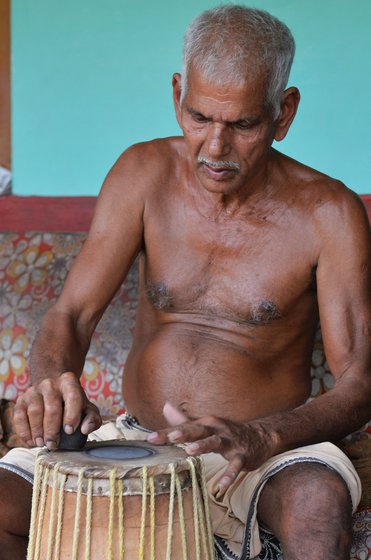 Left: The men of a family work together at home. Right: Applying the black paste on a drumhead requires precision

“There is no instrument from Peruvemba without cow leather,” says Sumod Kannan, a 38-year-old craftsman. The hide of a single cow costs around Rs. 4,000. “Of all the hides, cowhide is needed for every instrument. The mridangam needs a little and the maddalam needs more.” Cowhide is used in combination with buffalo or goat hide, and the quantity of each varies in different types of instruments. “While cowhide is used mainly in chenda and maddalam , goat hide is used in mridangam . The cow’s intestine is used to make edakka ,’’ says K.V. Vijayan, 47.

Among the  Kadachi Kollans, the entire family is involved in the craft process. The women wash and scrub the hides and smoothen them after they are dried. The men process the leather, shape the wood and craft the instruments. They make their own tools, like chisels, knives, blades, reamers and clamps. The children are trained from a young age, and even taught to apply the paste for the black ring, called mashiyidal , on the drumhead. The paste is made by powdering puranakkallu , a locally available black stone , and kneading it with boiled rice. “The application requires a great deal of precision,” says Sunod Krishnan.

All the instruments made in Peruvemba are from the wood of the jackfruit tree, which grows abundantly in Palakkad district. The craftspeople source the wood from local farmers and traders at Rs. 2,700 per cubic metre.

The quality of jackfruit timber is getting affected by the delay in arrival of northeast monsoon (October-December), says Rajeevan. “It's because of climate change. The traditional drying process of the animal hide is also at risk," he says. Kerala received the highest rainfall in a hundred years, between December 2020 and January 2021, says Dr. Gopakumar Cholayil, scientific officer with Academy of Climate Change Education and Research at Kerala Agricultural University, Thrissur.

“We have never thought of using alternatives. The jackfruit wood and animal hide are essential for us," says Manikandan. "If the government bans cow slaughter across the country, we will have to go back to being metalsmiths." The Kadachi Kollan community settled in other parts of the state – Lakkidi-Perur in Palakkad district, and Vellarakkad and Velappaya in Thrissur district – make agricultural implements even today, he says. 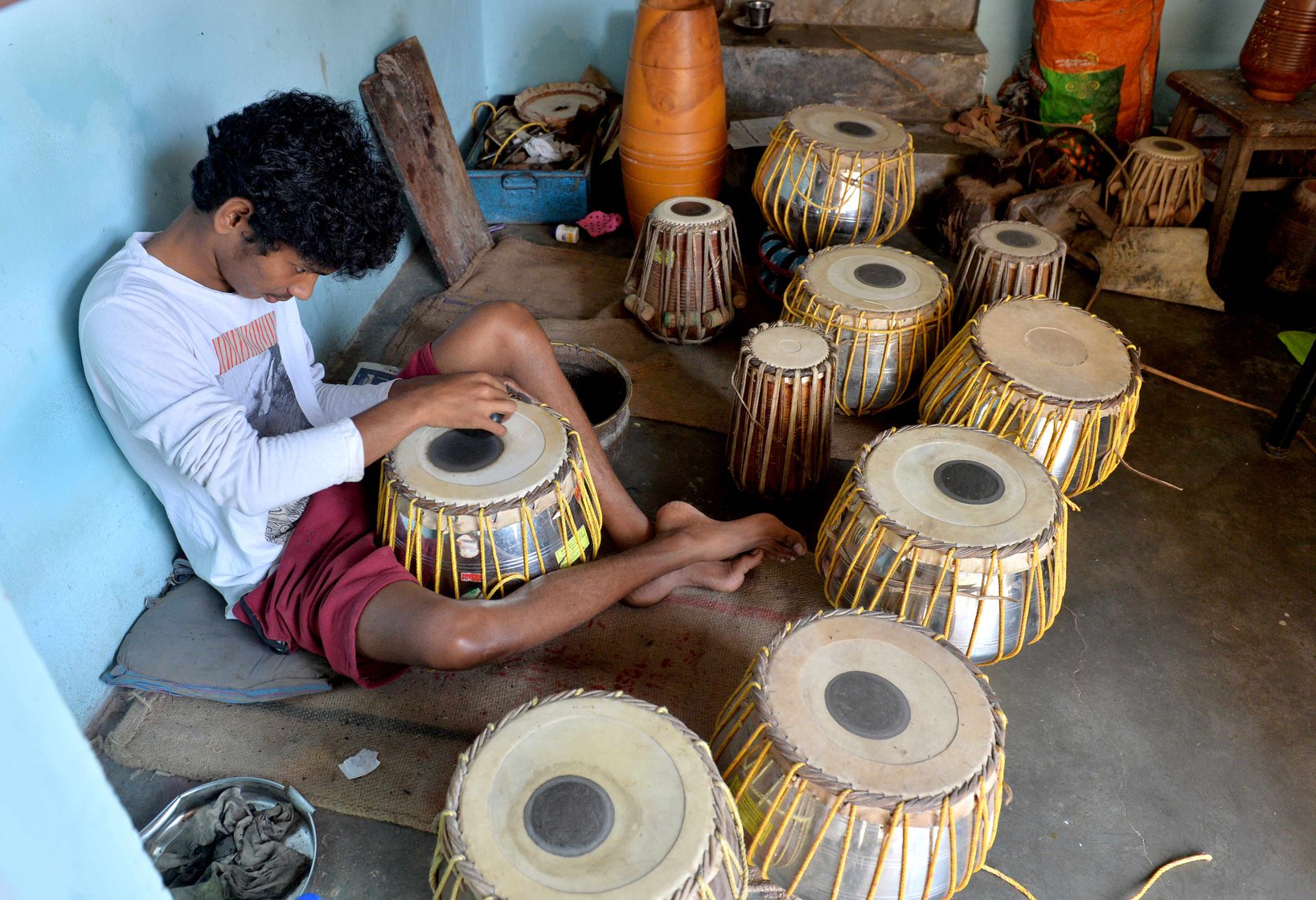 In 2019, the Kerala government removed the Kadachi Kollan caste from the list of Scheduled Tribes (ST) and included it in the list of Other Backward Classes (OBC). Since then the community has stopped receiving state support and other benefits. “Studies done by the state government found out that Kadachi Kollans belong to the OBC category. Somebody must have fabricated the documents and given us the ST status. But now there is no financial help or support from the government,” says Manikandan.

Peruvemba’s craftspeople and their tradition are significant for Palakkad's reputation as a hub of Carnatic music, according to  T.R. Ajayan, secretary of Swaralaya, a well-known cultural organisation in Palakkad. “Temples and music events in the state and outside depend on this village. No other place makes such a variety of musical instruments.”

But the youth in Peruvemba have started exploring other professions. “This work [making instruments] requires a lot of effort and patience. Hard work is the primary investment. So the new generation is looking for other options,” says 29-year-old M. Ravichandran, whose 21-year-old brother is a postgraduate student of History in a Palakkad college. “As a custom, we studied until plus-two [Class 12] in our family, and then came into the profession full-time. The younger generation is almost indifferent, and the village is struggling hard to retain its unique existence.’’

The scale of the crisis faced by the Kadachi Kollan families in Peruvemba during the lockdown was unprecedented, Manikandan says, but he believes better days are coming. In December, the collective received 12 instruments for repairs, and enquiries for new instruments started trickling in, in January. "It looks like we’ll be back on track by end of February, in a small way at least," he says. “I don’t think 2021 will be a repetition of 2020.”

K.A. Shaji is a journalist based in Kerala. He writes on human rights, environment, caste, marginalised communities and livelihoods.

Other stories by K.A. Shaji