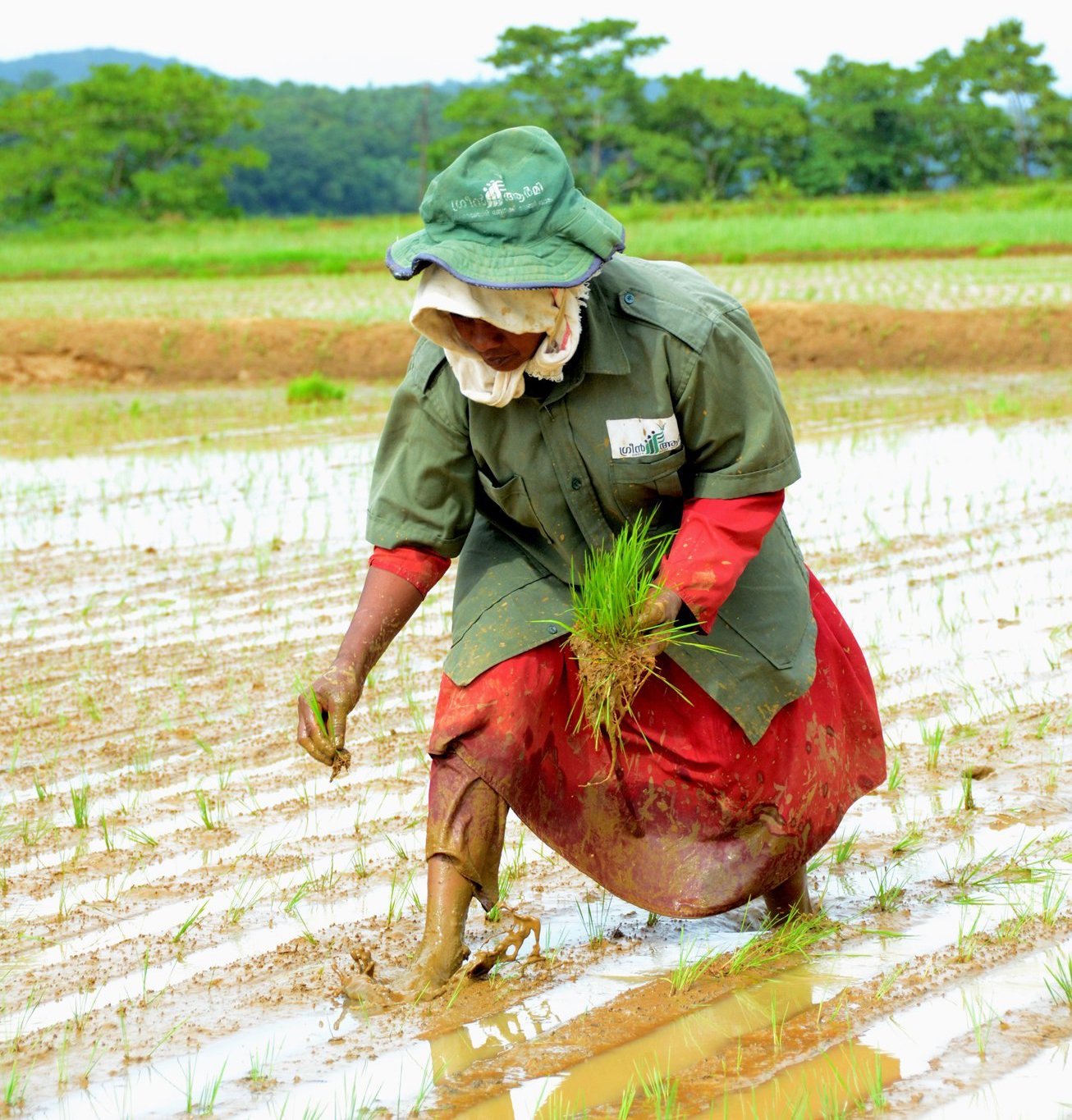 Varavoor is a long way from Thrissur but we’re told otherwise when we hitch an auto to the place. The rubber plantations, expansive and fenced away, leave a lasting impression. Our auto stops on a pukka road running in front of a shack by open fields. Varavoor is one of nine village panchayats in Wakdakkanchery Block that have become laboratories for a new project, the Green Army Initiative.

For 10 acres under cultivation, this field is sparsely peopled. Instead, two tractors hum through the mulch of the wet field. Hunched over in the quiet glass of the paddy are seven Green Army workers, in dark green uniforms, some with wide-rimmed hats. As we start down the bank of the field, a green-shirted farmer, disappearing beedi in hand , walks up to my friend. This is K.P. Moideen. He has a peeve and he thinks that my friend, a journalist with an established local newspaper, can help.

Mining and quarrying have been going on close to their farm, too close for comfort. My friend says that her newspaper is on it. Moideen is one of 10 farmers working on this piece of land in Varavoor. And he clearly has plenty to worry about. But the uniformed Green Army workers, of Kerala's labour bank, who are busy on his farm have made some progress in addressing two crucial issues: low productivity in paddy cultivation and a shortage of farm labour.

In spite of its impressive social indicators, Kerala’s agriculture has been anything but impressive. Between 1975 and 2007, the cultivation of paddy, Kerala’s staple diet, plunged from 8.84 lakh hectares to 3.52 lakh hectares. While nearly a quarter of the agricultural land in Wadakancherry block can potentially be cultivated with paddy, farming had remained sluggish. Worse still, productivity was expected to fall lower than 2 lakh hectares by 2011 if the trend continued.

Kerala had reason to panic. Due to expensive inputs, farmers lost their farm labour and the state, its farmers. “I couldn’t find people to do this job,” AT Moideen shruggedwhen asked why he approached the Green Army. Population increased but lands lay fallow and agriculture went dormant. Alarm bells rang and in 2007 the state government went into overdrive launching the ‘Food Security Action Scheme’. Keeping ambitions realistic, the Green Army took upon itself the task of cent percent paddy cultivation only in Wadakkanchery block. 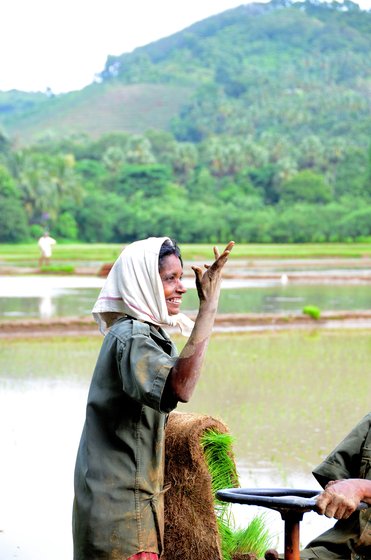 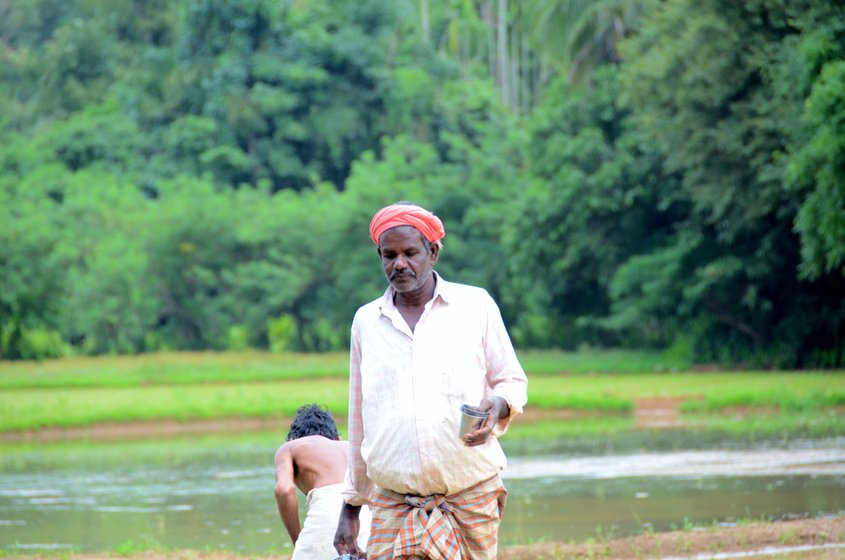 So the patch in the making had lain fallow for nearly a decade before the labour bank descended upon it. Lata, a Green Army labourer, shares this with me with some exasperation and a lot of pride. Pride because to her, partaking in this process of colouring green, is rewarding and empowering. The hum of the transplanter, today under her control, corroborates. While talking to her, I gauge that Lata has one eye on the parked machine. The white scarf secured under her chin highlights her broad forehead, the vermilion in her hair, prominent cheek bones, dark eyes. Lata is tall but I remember looking down at her because she never steps onto the bank while we speak, preferring to remain ankle deep in the wet field, her experience and readiness almost ten years old though the green uniform and tractor only five.

She joined the Green Army five years back having first heard of it through Kudumbashree. Lata had, at the time, been a plantain worker. As a newbie in the green army, she underwent fifteen days of training. At Varavoor, the transplanter manned and run by her weaves concentric eights as it shoots paddy seedlings in the field. Lata hops off for harpin bends, physically hauling the clunk in its moments of obstinacy and hops back again to keep the transplanter arm fed and running. There are other machines she can run, all the result of the two week intensive. Of course anyone can enlist in the army and work once adequately trained. The Green Army assesses interest of both labour and farmers, recruits and trains a team of labourers in mechanized agriculture and then deploys them at worksites. What about the farmer’s contribution? AT Moideen approached the labour bank with details about their farm and a sum of Rs 3000 ready for submission. Green army computed the number of labourers he would need for the entire season. Wadakancherry block panchayat in partnership with the Rashtriya Krishi Vigyan Yojana (RKVY) and grama panchayats helped with the machinery.

In spite of semi-mechanization, old school farm labour has not been foresaken. As the transplanter trundles in one part of the field, a few metres away, Padmavadi in a team of four is wading through the mulch, calf deep and hunched. She has been in the Green Army for four years. This patch will be her office for three months. She has seedmat ready on the bank, seedlings fastened in her busy hands. When she spots empty pores, the machine’s oversight, she darts with the seedlings. The machine’s ommissions aside, mechanization is an infamously polarizing subject. Sample industrialisation, the history of Tokyo’s stock exchange and complementary stories of redundancy abound. Fortunately Green Army’s design and implementation has been conservative if not downright mincing in phasing in mechanized agriculture. The machines are machines alright, but they’re effective so long as farm labour* gets its space.

AT Moideen and KP Moideen keep to the edges of the field, coming close only with a steel thermos of tea, glasses and achappam. They have these fifteen acres of land on lease. It takes 32 kilograms of grain to cultivate an acre worth of paddy. Of the produce, 22 kilograms for every ten cent of an acre goes to the owners. That’s 220 kilos for an acre. Seeds are made available to them at subsidized rates of fifteen paise per kilogram from the Agriculture office. The agriculture office is only one in an entire network of institutions running the Green Army. RKVY, local self governments, Agriculture Technology Management Agency (ATMA), Department of Agriculture, Kudumbashree, Thrissur Ditrict and Wadakancherry Block-these are some of the important partners in this program of horizontal and vertical convergence. 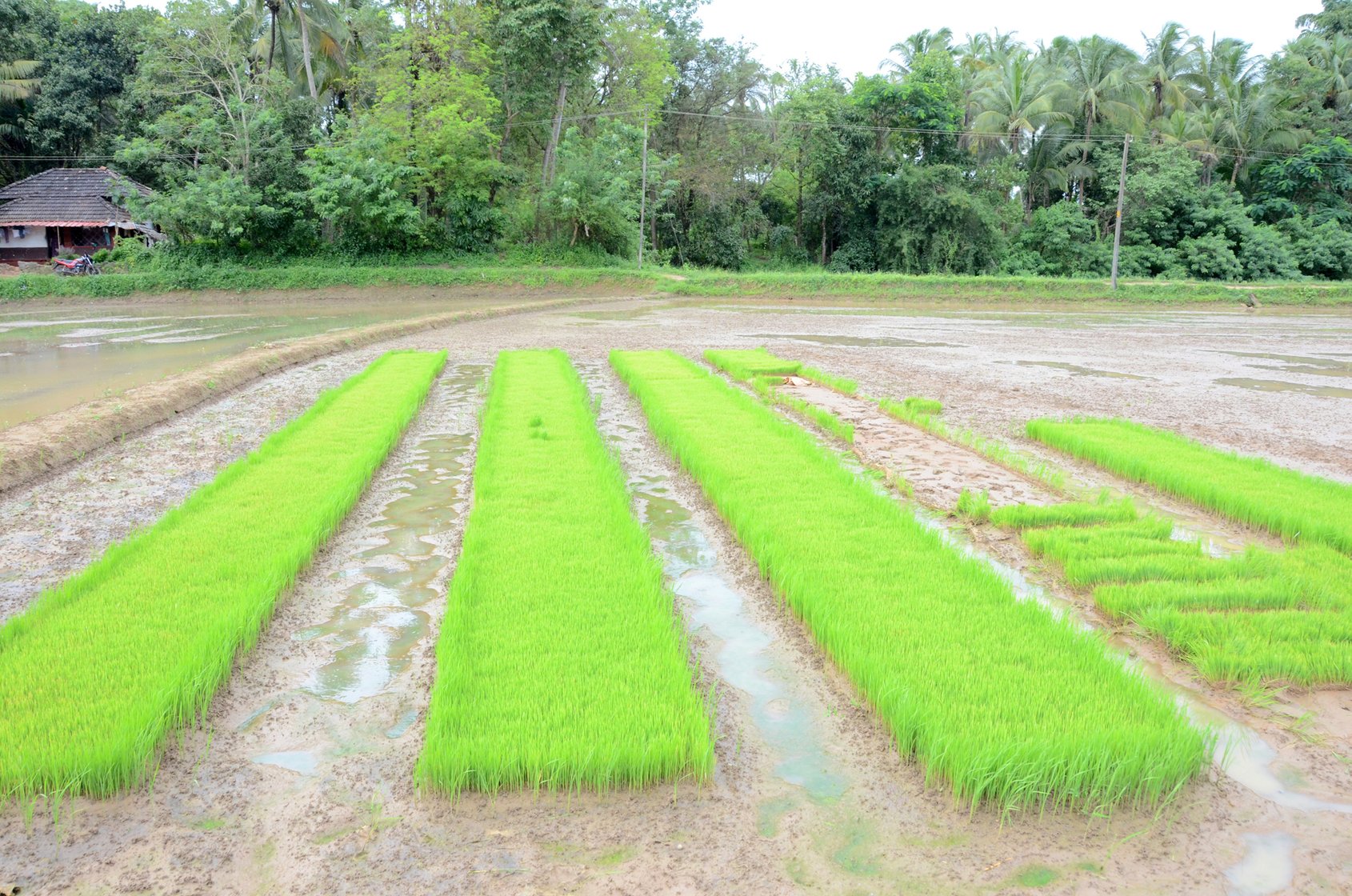 Last season Moideen made a profit of Rs. 5000. This sounds modest, at most. But he’ll take what he can get. And what he gets is semi mechanized agriculture, trained hands and efficient production. “Before we got the machines, ten labourers had to be hired per acre. Now the same number of people can cultivate 17 acres,” chimes Lata. She, Padmavadi and other Green Army workers also receive some form of social security. Enrolled and recruited labour earns Rs 8000-12,000 a month, stable contracts and their finances are managed by the Peringadur Service cooperative bank. The returns approximate that of daily wage labour, though with the state as an intermediary, one is saved the job’s typical uncertainty. As a program that has long pushed beyond NREGA’s 100 day cap, the Green Army has even bigger plans for the labour bank. “Last year, we were able to pay for ten months of work. We would like to be able to provide 300 days of employment,” says Anoop Kishore, coordinator of the Green Army.

The program is not free of its own oversights. While coordination among all the partners is impressive, there is the occasional embarrasing hiccup. “We got bad seeds and our crops failed. We’d like to be compensated,” share Moideen and Moideen. They are two amongst seven who have had to cultivate twice this season due to the lapse, painful if the prognosis itself can take fifteen days. And in paddy cultivation as they practice it, it does. These paddy cultivators wait about two weeks after sowing paddy seeds in paddy mats. Once green, the patch is sliced, parts floated to the transplanter, severed from its plastic float and fed to the machine. Time and work efficient if all goes smoothly; bad seeds however nip the process in the bud.

Overall, the green army has tasted success. Production and productivity have increased, labourers have found work cushioned with some social welfare and farmers aren’t fleeing the profession. The succes of the programme raises questions about its potential for replication. After all, isn’t Kerala the exception rather than the rule? And is collective disillusionment and decline in fact what it takes to inspire a project as motivated and meticulous? Still, the Green Army initiative offers a blueprint in corrective state intervention. A hopeful start.

For more pictures on the Green Army, and to hear the photographer on the subject, go to Talking Albums: http://www.ruralindiaonline.org/albums/the-green-army/