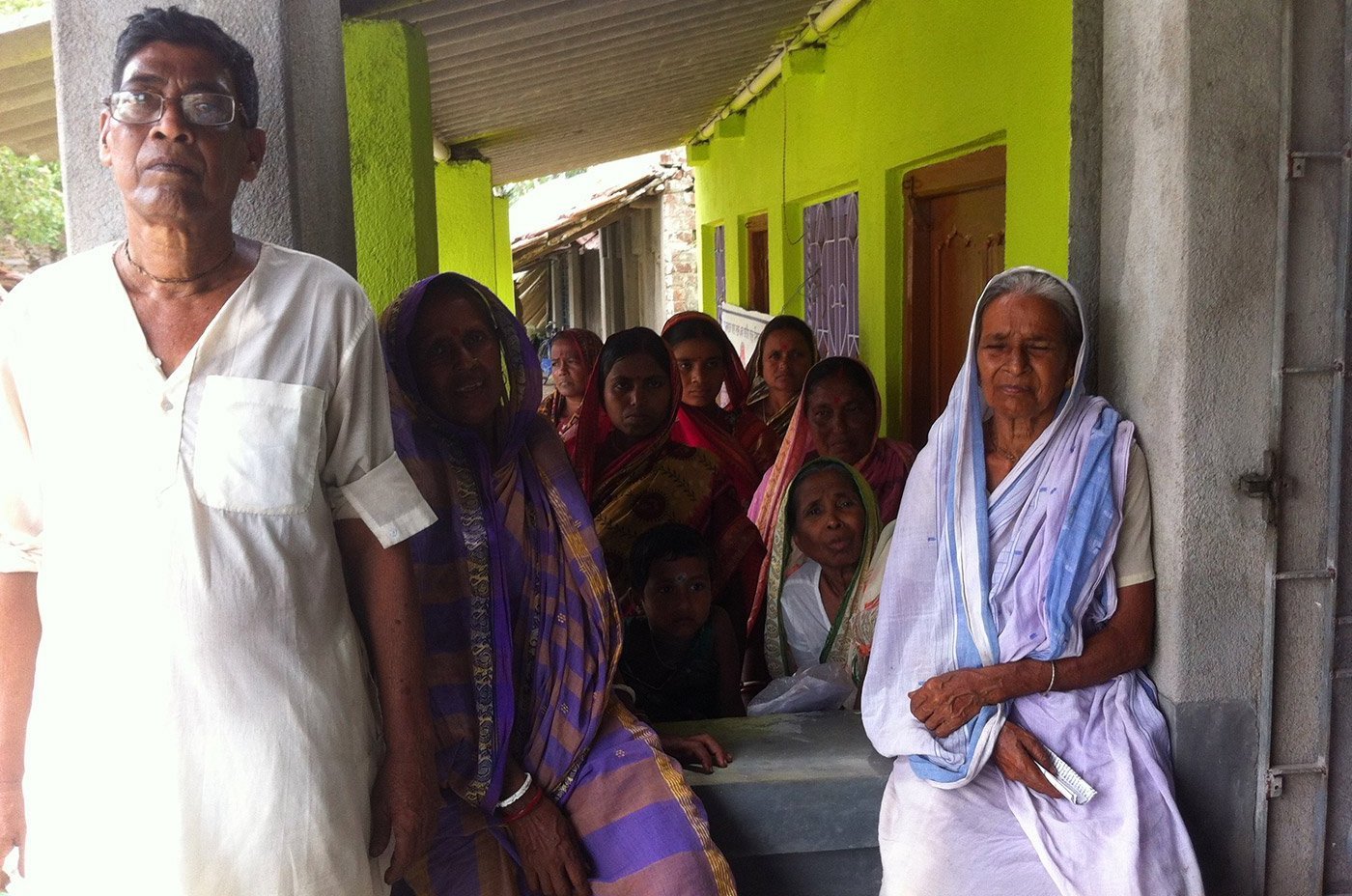 ‘In emergencies we are really stranded’

Falling ill in the Sundarbans is a gamble. With difficult terrain, only a handful of healthcare centres and few doctors, the people turn to mobile medical units or other long-distance options – usually at great cost

It was only after Fatima Bibi’s newborn died that she came to the community delivery centre for her fifth delivery. All her children – three girls and a boy – were born at home. “The boy died due to a lack of oxygen,” her mother Jamila says. “So we came to the hospital this time.”

The family hired a van for Rs. 700 for a mere 30-minute journey from their village Rampur to Bayermari village in North 24 Parganas district. “Poor women in our village take the boat to travel to the hospital,” Fatima says. “In high tide it’s very risky. Last year, a heavily loaded boat capsized near Kathkhali during high tide. Some people even died.”

Fatima’s struggle speaks of the difficulties pregnant women in the Sundarbans frequently face. And this is true for all health concerns – getting medical help is an uphill journey for most people living on these islands.

The Sundarbans is covered by only a bare patchwork of medical sub-centres – the first contact point for the community with the government’s primary health care system. Each sub-centre is meant to cover 5,000 people. In Paschim Sripatinagar and Purba Sripatinagar villages in South 24 Parganas district, the total population is around 9500 (according to Census 2011). This number will have since grown – so more than 10,000 people are entirely dependent on two ill-equipped sub-centres and a few self-proclaimed local ‘doctors’ for their health care needs. 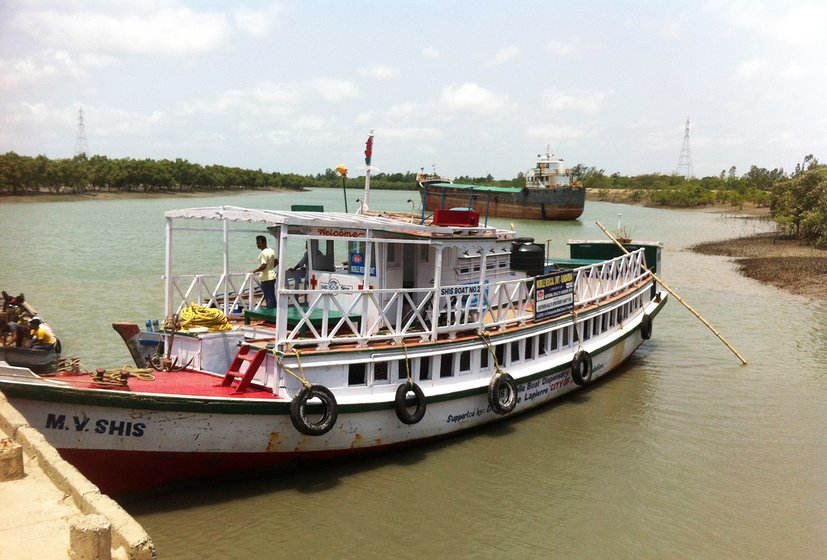 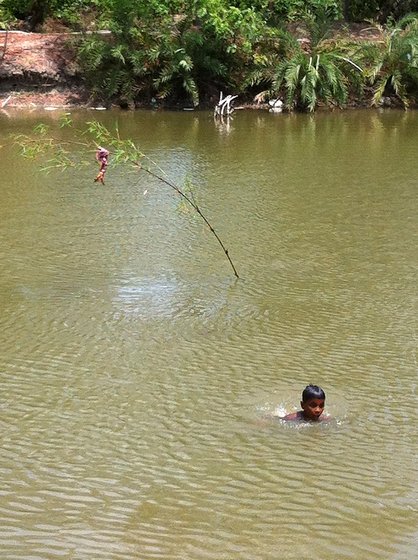 Left: A mobile medical unit, run as part of the National Health Mission, traverses the waters of the Sundarbans. Right: The high salt content of water in the Sundarbans can cause many illnesses

This forces people living in villages like Paschim Sripatinagar, located in remote parts of the Sundarbans, to turn to services like mobile medical units. Some of these units are operated on boats that traverse the waters here. On the day of our visit, a handful of ill and ailing people have formed a small crowd just outside a bare room, which will become a clinic for the day. A medical crew has just arrived after a two-hour journey across the river Shibua.  It is Tuesday, the day designated for the unit to visit this village.

This mobile clinic is a part of the National Health Mission. The Southern Health Improvement Samity (SHIS) and other non-governmental organisations operate these units to plug the coverage gaps of the two government sub-centres in Paschim Sripatinagar and Purba Sripatinagar, as well as in other parts of the Sundarbans.

Fewer than 10 such mobile units operate in the Sundarbans – and the islands have a total population of 4.4 million. But many villagers prefer to visit these temporary clinics because getting to the sub-centres can mean crossing difficult terrain, often only to encounter a shortage of qualified doctors.

In Paschim Sripatinagar, Asha Das has walked from her home to reach the one-room weekly clinic. When ill, walking across semi-formed brick roads with a harsh sun beating down cannot be easy. She speaks of the difficulties of seeking treatment: “Organisations like SHIS operate clinics on one or two days of the week. On all other days, we are dependent on the sub-centre or on quacks.  The [public] hospital at Patharpratima is nearly three hours away and takes at least Rs. 100 to reach. We need to change at least two boats and vans.  In emergencies we are really stranded.” 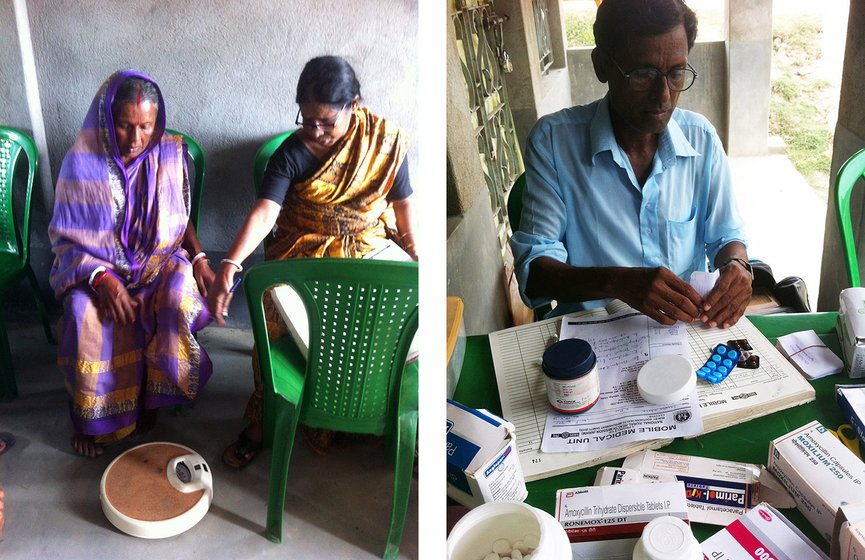 The most common complaints of the people who visit the mobile clinic, Debjit Maity, of the SHIS says, are arthritis, gout, spondylitis, leucorrhoea, scabies, eczema and boils. Dr. Prasanta Roychowdhury, who sees patients at the SHIS clinic, says the high salt content of the water is a key trigger for many illnesses across the Sundarbans.

He too speaks of the problems with accessing health care across the Sundarbans: “Doctors don’t want to come here, there is little money and no life. The government does not even give them a place to practice in some areas. Why should they come? So local quacks administer to the people in an unsatisfactory way and even occasionally fleece them.”

And these health care obstacles are magnified for pregnant women. The government sub-centre in Paschim Sripatinagar is located a short distance away from the SHIS clinic. Inside, two ANMs (auxiliary nurse midwife), Mohima Mondal and Lokhi Bor Mondal, sit at a desk. The centre has two tables to examine patients – there is no bed or electricity. Not a single patient has come here that afternoon, the day of the mobile SHIS clinic. The ANMs say, “We ourselves urge people to visit a qualified doctors, like those of SHIS, when they come to the island.”

At the sub-centre, treatment is available for basic illnesses, and ante-natal and post-natal care for pregnant women – dispensed by the ANMs, a few ASHA (Accredited Social Health Activist) workers and a male nurse. However, deliveries are not performed there. Lokhi Bor Mondal says, “We have to really convince women to deliver at the hospital [since the distance and cost are real deterrents]. Even the panchayat has had to deploy tactics and say that women will receive birth certificates and ration cards only if they deliver in the hospital.” 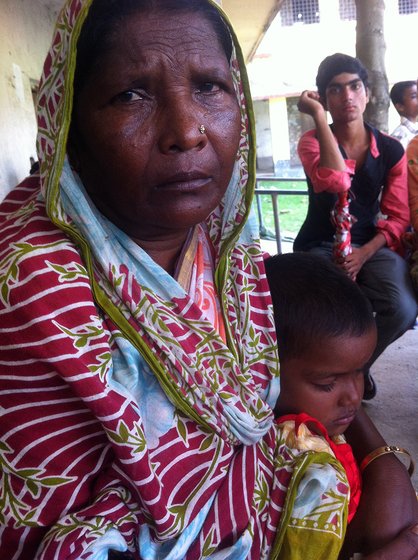 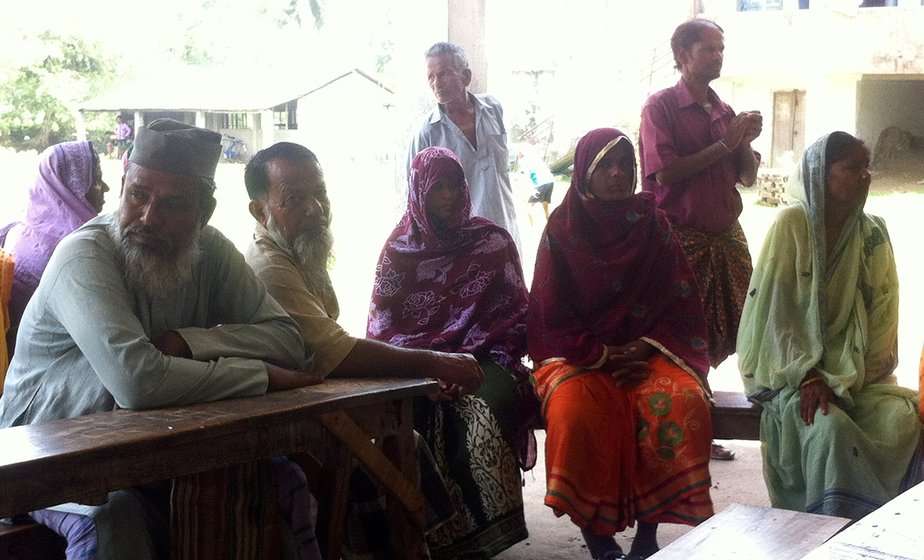 Left: Hamedon Bibi, a ‘daima’ , and her granddaughter Hosnara Khatun, from Mousuni island. Right: An eye camp in process on the island

Hamedon Bibi, who works at the sub-centre in Baliara village as a ‘daima’ [traditional birth attendant], is well over 50.  When she started working 14 years ago, her monthly salary was Rs. 25. Now it is Rs. 550. Her work involves helping pregnant women to deliver their babies. She says, “Why do I not receive coloured saris like the ANMs and the ASHA workers? I work so much, but receive no recognition. I do not even receive lunch or food money.”

A community delivery centre (CDC), established at nearby Lakshmipur village three months ago, has improved the situation to some extent. CDCs, many of them run by NGOs, promote institutional deliveries. Along with government hospitals, they have made it possible for more women here to get such deliveries. But 55 per cent of babies in the Sundarbans are still born at home, according to a 2014 study by the Indian Institute of Health Management Research, Kolkata.

At times, an NGO fills a few of the health care gaps by setting up a camp. On Mousuni island of Namkhana block, Farida Baig, a villager, is helping set up such a camp organised by the Samaj Unnayan Kendra in a classroom in a rundown school. This NGO also operated a daily medical launch (not part of the National Health Mission) until its funding ran out in 2015. Now it runs occasional health camps, and in May this year it organised an eye camp on the island.

“The villagers know of the camp because the panchayat made an announcement on a mike,” Farida says. “When we fall ill, we are referred to Dariknagar public hospital which is around 15 kilometres away. But boats are not always available. Sometimes, the hospital has no doctors or oxygen or will not perform caesarean [deliveries]. They then refer us to the Kakdweep hospital, another 35 kilometres away. When pregnant women travel to Kakdweep, they brave non-existent roads and high tides.”

Patients await their turn to see the doctor on Mousuni island

And when none these hospitals can help, the islanders go to the bigger hospitals at Diamond Harbour and Kolkata – this involves 5-6 hours of travel and considerable expense.

Anwar Alam, coordinator of the SHIS’s health programme, feels it is impossible for the government to reach the remotest corners. Talking to me in his office in Ghatakpukur, he says, “How far can they reach? They are also strapped for funds. Whether the mobile medical launches or the CDCs, these are mostly run on the public-private partnership model. The government relies heavily on the assistance of those NGOs which can deliver health services.”

But Dr. Nilmadhab Banerjee of the Bayermari CDC has a different view: “How long will you blame the broken roads and violent rivers?” he asks. “This situation is not only in the Sundarbans. These are only excuses. There are problems at every level of the health system which need to be addressed, including the challenges that rural doctors face.”

In the meantime, the people of the Sundarbans continue to take chances with their life and health.