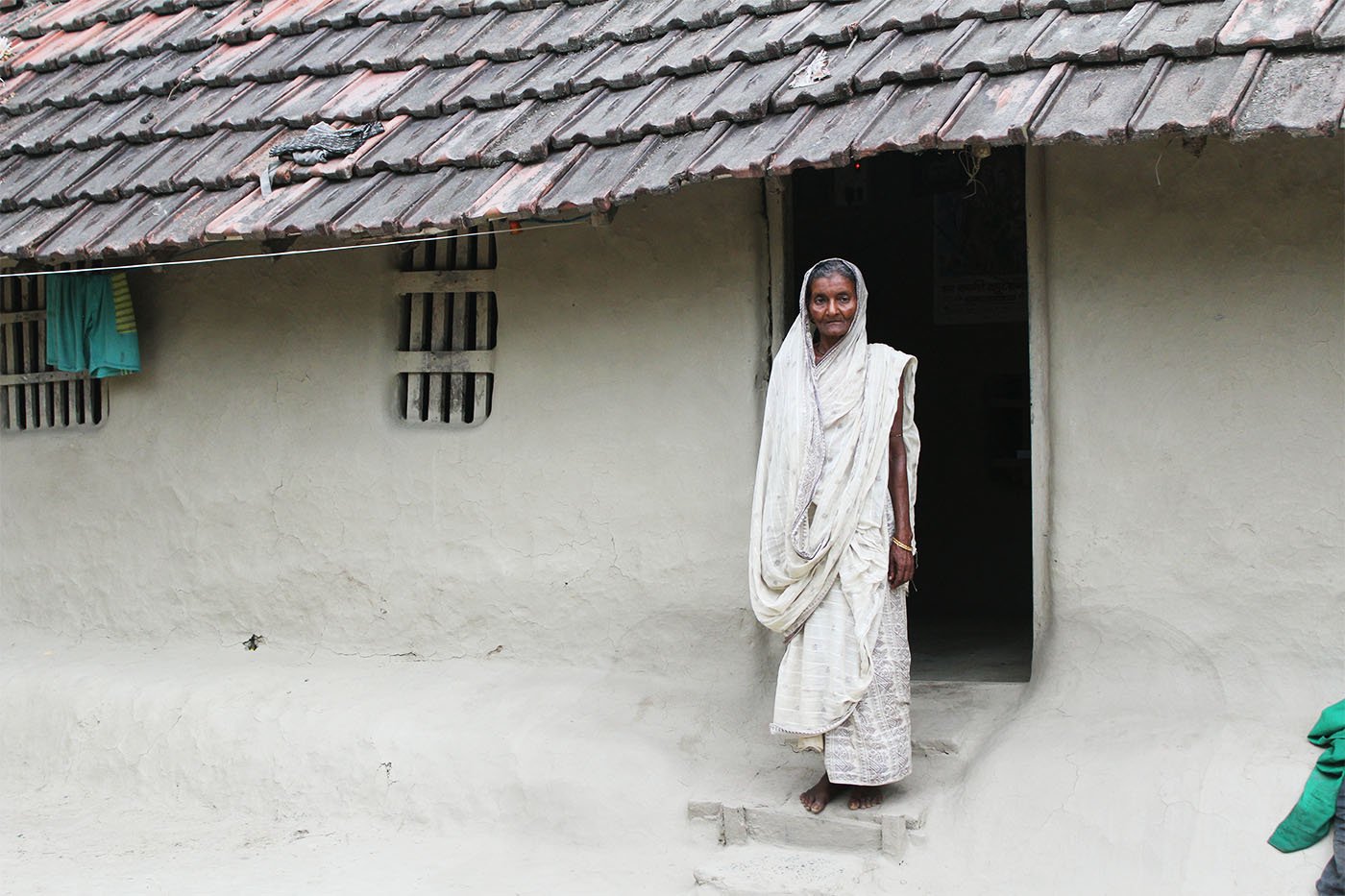 ‘Our houses are vanishing. Nobody cares’

For decades, villagers from Ghoramara island in the Sundarbans have been migrating to Sagar island because the river and rain keep washing away their houses. They have received little help from the state

“I remember the storm arriving and heavy rain pounding away at my house. Then the house crumbled before my eyes and the [Muri Ganga] river washed it away,” says Purnima Bhuyan. She is recalling one of the many times her home in Khasimara was destroyed.

Now more than 70 years old, Bhuyan no longer lives in Khasimara village on the tiny Ghoramara island in Sagar block of South 24 Parganas district. In 1993, hers was one of the 13 families from Ghoramara granted a small piece of land by the West Bengal government in Gangasagar village on Sagar island, a 45-minute boat ride away.

Since the mid-1970s, Ghoramara’s land mass has shrunk by nearly half – from 8.51 square kilometres in 1975 to 4.43 square kilometres in 2012, says a 2014 paper in the journal International Perspectives on Climate Change . The causes for this are many – river and coastal erosion in the Sundarbans region where the island is located, flooding, cyclones, the loss of mangroves, the rise in sea levels. While the total number of people on Ghoramara displaced by these processes is unclear, some islanders believe that, in various batches, around 4,000 have been forced to move to Sagar or to mainland areas like Kakdwip and Namkhana.

Bhuyan clearly remembers that day when her house collapsed, though she cannot recall which year it was. “I was washing vessels in my neighbour’s pond from where I could see my home. My husband was sick with typhoid. My neighbour, whose house was bigger than ours, asked me to bring him and our children there,” she says. “It had started raining, high tide had set in and the river had reached the land on which our house was built. Our house withstood the rains for a long time, but then a storm came in from the east bringing even more rain. Soon, the house [broke down and] vanished. I’ve lost my house to the river 10-12 times.” 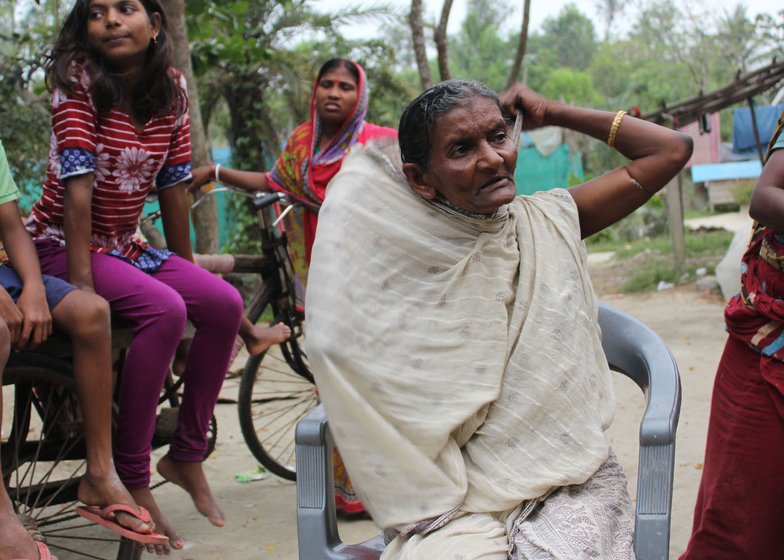 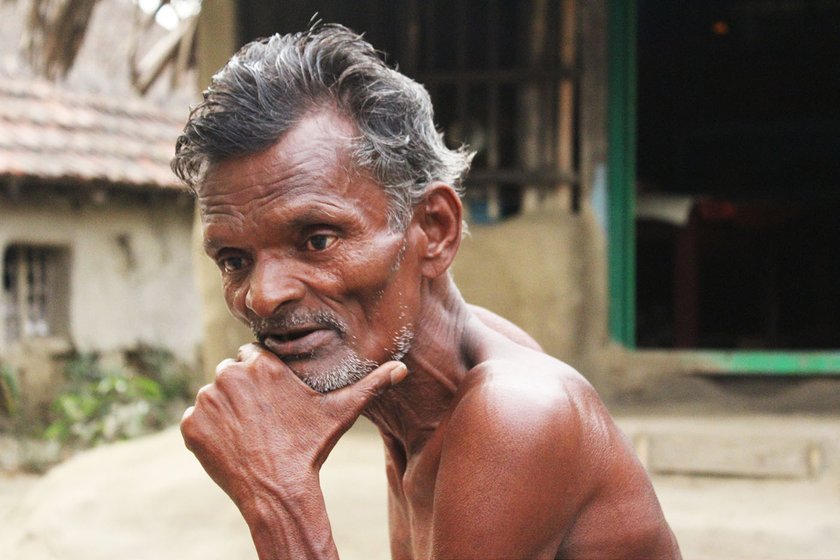 Purnima Bhuyan (left) shifted to Sagar island in 1993 after her home was destroyed 10-12 times, and Montu Mondal (right) moved after losing his house twice

During the years that Purnima’s home was repeatedly washed away by the river (she cannot recall in which decades), she says she received no help from the government. It was only in 1993 that small plots of land – barely an acre – on Sagar island were allotted to families whose houses on Ghoramara had been destroyed.

Given a choice Bhuyan would still live on Ghoramara. “Let me tell you why I love it. The people were more helpful. If a family lost its house, another would immediately offer its land for building a new one. That does not happen here,” she says with a sigh. Sadly, Khasimara village was completely submerged and Census 2011 recorded its population as zero. People still live in some of the other six villages on the island though – around 5,000 (Census 2011) across the Ghoramara gram panchayat area (and in the course of later years, this population has declined too).

Montu Mondol, who arrived in Gangasagar in 1993 along with other families from Ghoramara, has not forgotten the hardships of the early years on Sagar island. The land allotted to him by the government could not initially be cultivated because of high levels of soil salinity. Besides, fresh water for drinking and bathing was also scarce. To earn a livelihood, Mondal, now 65, did daily-wage work like digging and selling dried fish. On his 1.5 bigha s (around half an acre) of land, he built a house and, over time, was able to cultivate rice too. 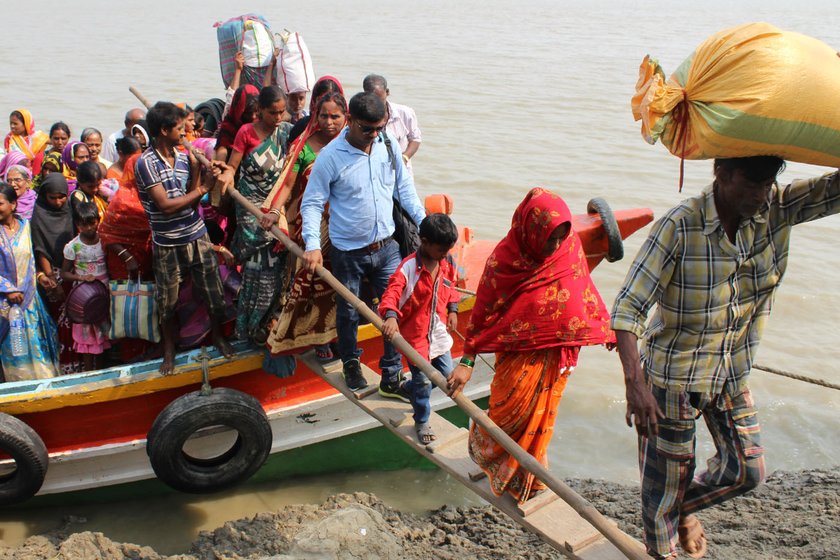 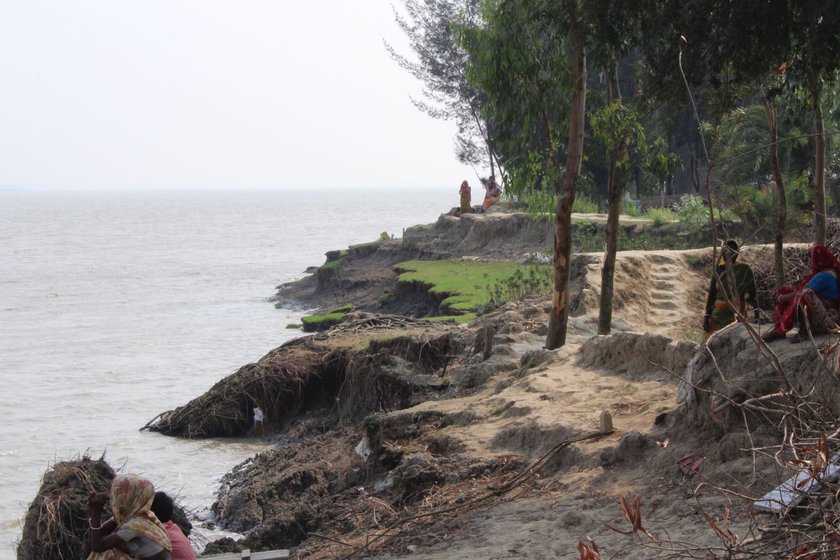 A precariously balanced wooden plank acts as a bridge between boats and Ghoramara island, where the embankments have been eroded by the Muri Ganga river

When he lived on Ghoramara, the river had destroyed Mondal’s house twice. “Till about 10-15 years ago, it would take 2-3 hours to walk from the north of Ghoramara to the south. Now it will take you under an hour to cover that distance,” he says.

Prof. Sugata Hazra at the School of Oceanographic Studies, Jadavpur University, Kolkata, says that the displaced villagers of Ghoramara are not recognised as ‘climate refugees’ by the government because they were forced to migrate within the country. “But they should be recognised as environmental migrants, a category which the government should create, and ensure dignity and justice for these helpless people,” he adds.

Watch video: 'Ghoramara was a land of happiness and gold'

According to an activist on Sagar island (who did not want to be named), from the 1970s to the 1990s, when people moved from Ghoramara to Sagar island, there were tensions between the migrants and the locals. He says, “The locals were unhappy that the areas for fishing were given away to people from Ghoramara. The number of people who needed fresh water also increased. The tensions reduced as time passed.”

Mondal and Bhuyan miss the kindness of people on Ghoramara island, but they haven’t made the trip back, even though it’s only a short boat ride away. Meanwhile, those who remain on Ghoramara have it tough. Sheikh Diljaan stands next to his cycle rickshaw near the landing point on Ghoramora, waiting to ferry people home. The island doesn’t have a jetty or a landing area at present – the river has taken it away. A precariously balanced wooden plank acts as a bridge between the boat and the island. Large parts of the embankment have eroded too, making the land difficult to walk on.

Watch video: The vanishing land beneath their feet

A few trips earn Diljaan Rs. 200-300 per day. To increase his income, he tried to grow paan leaves four years ago, but failed. “The plantation was washed away in less than a year. I did not expect the river to come so close to the land so quickly,” he says.

Ghoramara’s saline soil and water limit agricultural options, and many on the island have turned to cultivating cash crops like paan . The sandy silt soil, though susceptible to salinity, is suitable for growing paan . Islanders are known to pray to goddess Bindubashini for the health of their plantations. But even that could not save Diljaan’s paan leaves.

Besides limited livelihood options, the residents of Ghoramara also have to travel to Kakdwip city (a half-hour journey) for daily necessities like vegetables and food grains. One health sub-centre in Ghoramara caters to the basic health needs of the approximately 5,000 people on the island. For serious illnesses however, residents have to travel to the hospital in Kakdwip. 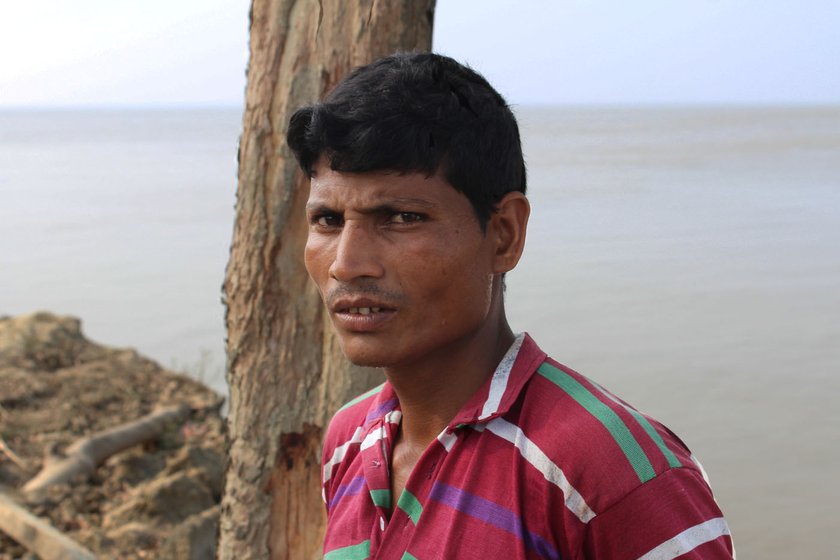 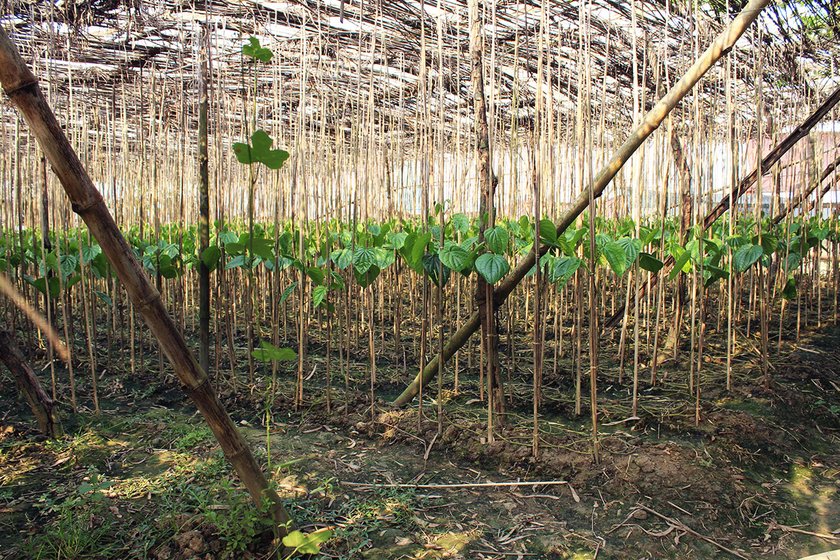 Due to a lack of work options, Sheikh Diljaan cultivated paan leaves on Ghoramara, but his plantation lost out to the water in less than a year

“I would be happy to leave this shrinking island with my wife and two sons,” says Diljaan. “But the government is not giving us land elsewhere.” After 1993, the government stopped resettling people on Sagar island reportedly because of a shortage of available land.

The lack of work on Sagar island is increasingly forcing the men in many families to migrate outside West Bengal in search of work. There is another worry – Sagar island is also shrinking and eroding every year, and its residents are fearful of losing their lands and homes yet again.

As we’re talking to Diljaan, who takes us on his rickshaw to a spot on the island where the river has swallowed up large chunks of land, Ranjita Purkait joins the conversation. Her house, which was washed away once, is a few metres from the river bank. “I might lose this house too. What has the government done? Nothing,” she says. “At least they could have strengthened the embankments! So many journalists come and take pictures and disappear. But our situation never changes. Will the government give us land elsewhere? This island is shrinking and our houses and lands are vanishing. Nobody cares. ”