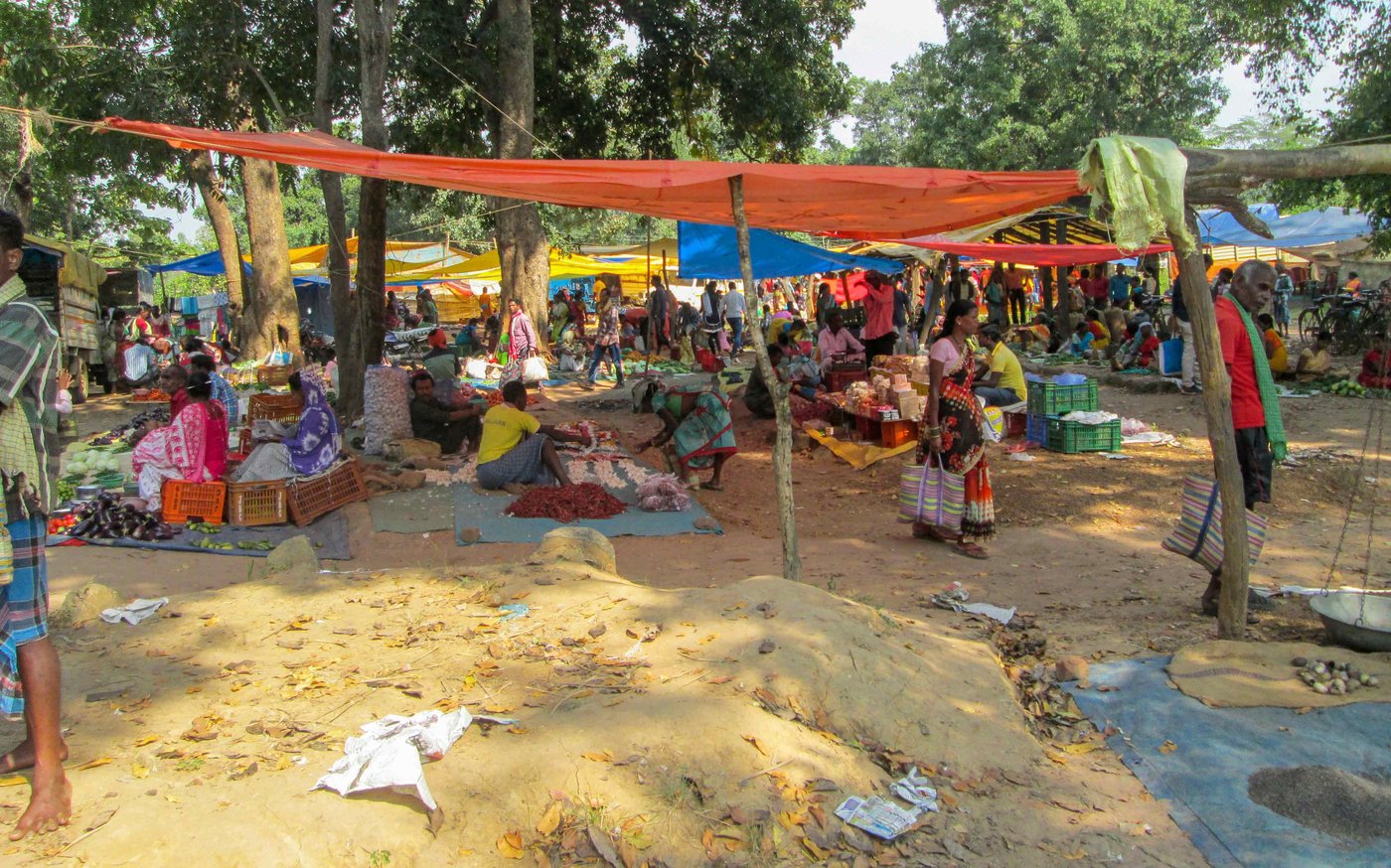 ‘I just want to live here in my home’

Gangay Sodhi, a Gond Adivasi in Chhattisgarh, spends her days busy in the rhythms of farming, cooking, fetching forest produce, and making mahua liquor for the haat. A story by students for PARI for Schools

“When there is no work [in the fields], I go into the forest to collect karmata fruits and other produce,” says Gangay. She is referring to the laaood , a sacred grove and scrubby forest that surrounds her hamlet, Balenga Para. Dark grey boulders, some the size of village houses, others as big as a cars, are scattered across the plains. The old trees tower over the landscape, their branches thickly covered with vines.

Balenga para is a hamlet at the edge of the Amravati forest in the Bastar region. From Rajnandgaon town in southern Chhattisgarh, it is an eight-hour rickety bus journey followed by a winding two-kilometre walk to reach there. In the hamlet, only the main street is tarred while the rest are dirt paths, dusty and speckled with cow-dung. Balenga Para’s 336 inhabitants (Census 2011) live around the main street in roughly 60 single-storey houses. Some are old and brown, and made of mud and brick. A few are new, made of concrete and tin or asbestos roofs, some of them painted neon shades of green and pink.

Gangay Sodhi, 33, is from the Gond Adivasi community. She speaks Halbi, Gondi and a little Hindi. Shy at first, she later agreed to let us write about her life.

Gangay spends her days taking care of her family, working in her father’s fields and making liquor from mahua flowers to sell at the weekly haat (market).

Her day starts early, at around 5 a.m. “I pound the paddy to de-husk it for the day’s meals. I wash dishes and fetch water from the nearby pump and get firewood. I make breakfast and go to work on the fields by 10.” By noon she is back home for a brief lunch, and then gone again. She finishes by four. “I bathe, fetch more water and firewood, sometimes replace the cow-dung flooring, and cook dinner of rice and curry [both vegetarian and non-vegetarian]. On special occasions we eat poori with a kheer [made of broken wheat].”

Gangay lives with her mother Kumenti and father Mangalram, her siblings Shivraj, Umesh, Sahandai and Ratni, and her three daughters – Jiteshwari, 15, Jyoti, 13, and 11-year-old Pratima – in a house just off the street. It’s close to the water pump – the only source of water in the village. Her brick house with a terracotta tiled roof is painted a bright green. At the foot of the door are spiral patterns made by coloured glass bangles inlaid in the floor. 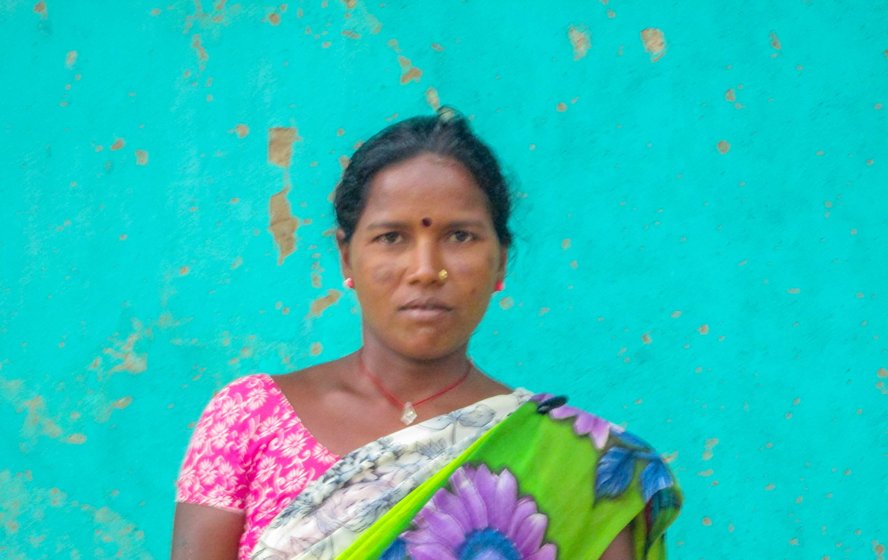 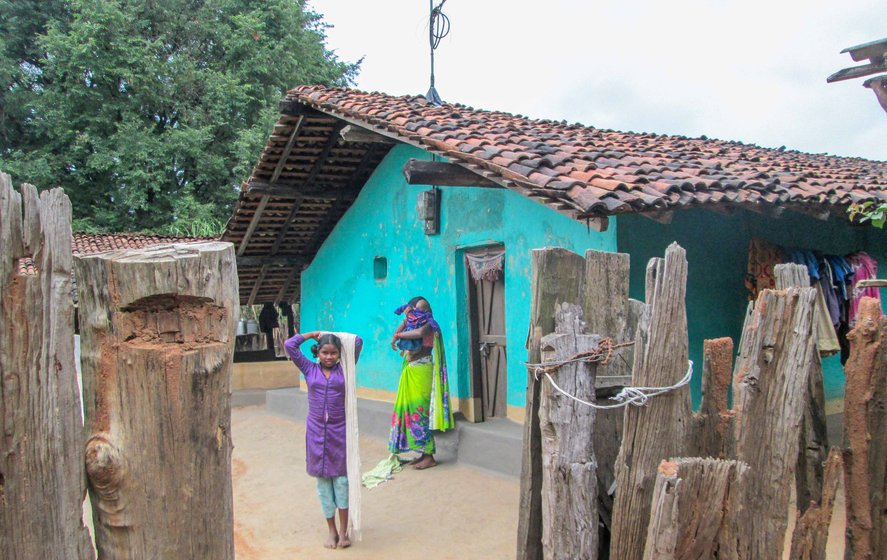 “In the fields [her father’s four acres] I make bunds and harvest the crops,” she says. Gangay has been working on the land since she was five years old. On the farmland, they grow paddy, lentils, horse gram, and oilseeds. And in their large backyard, her family grows ragi (millet) and urad dal , along with some vegetables. The crops are fed by the monsoon rains between June and November.

“In the summer months, I gather mahua flowers that fall on the ground and dry them on large boulders. Then I store them for a bit before soaking in water and fermenting them into mand [liquor].” Many Gond tribals make and sell mahua liquor. “It goes for 50 rupees per bottle,” says Gangay. They re-use 650 ml beer bottles. A pint bottle (450-500 ml) is called an addi and sells for Rs. 25.

At the weekly Friday haat , with over a 100 stalls, people come walking or on motorbikes and cycles to sell their wares from as far as 20 kilometres away. They buy and sell forest produce, vegetables, sweets and fried foods, clothes, beauty products and plastic items.

Inedible forest produce is also sold: saal seeds, karanji seeds, girchi seeds and vadangul seeds, all made into oilseeds used for soap or as medicinal applications. Brooms made from date palm leaves or grass or bamboo also sell here. 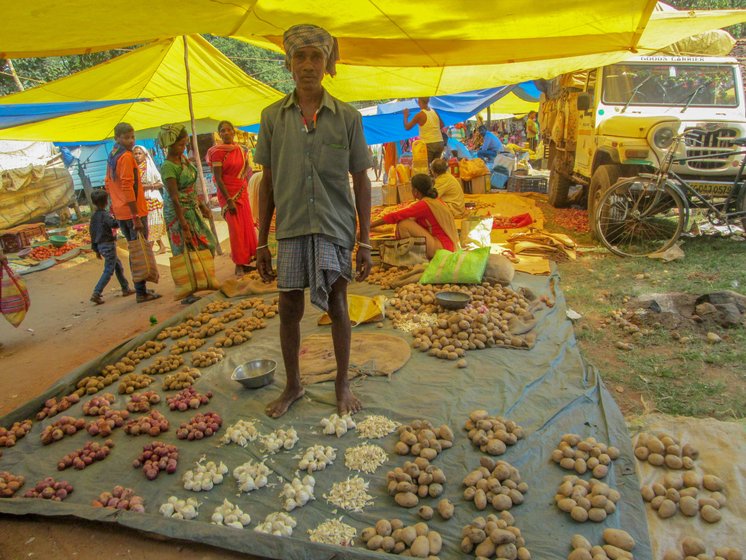 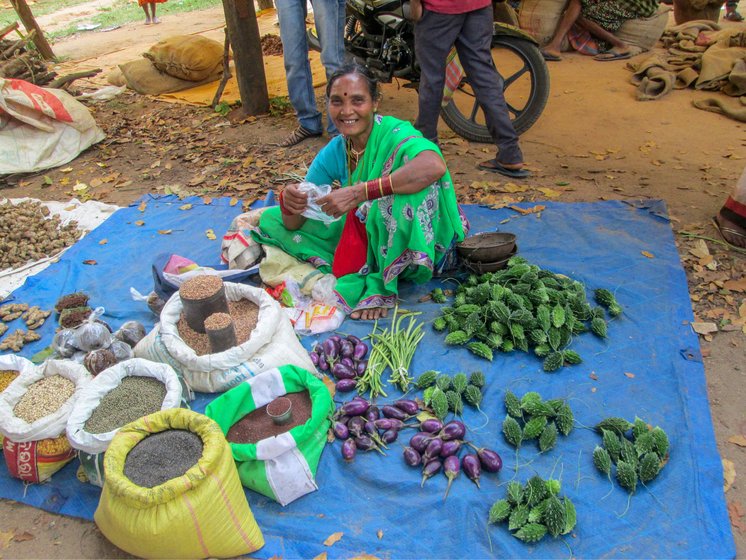 The haat is a burst of colour in the otherwise tranquil area. The market starts at noon and lasts for several bustling hours

The market starts at noon and lasts for several bustling hours. By seven in the evening, as the light fades, everyone begins to pack up. Traders load their wares to sell again at another market, and the people of Balenga Para carry their goods home, as does Gangay, with her purchases of fruits and vegetables, and perhaps a bottle or two of leftover mand .

When she was younger, Gangay wanted to go to school, but couldn’t. “Now, I am proud of my daughters for studying,” she says.  She wants them to someday marry and live in their own houses.

Gangay was married in 2002, at around the age of 17, to Chedhilal Sodhi. In her community, both the woman and man must agree to the match. The wedding ceremony is performed in the bride’s village, followed by a celebration in the groom’s village.

“He was picked by my parents,” she says.“But I left him some years ago and returned with my children to my parents’ home because he used to drink and beat me. Both my parents and his parents, and people in the village, tried to reason with him, but it didn’t work. Sometime later, he died, so I haven't gone back.”

Did she ever want to remarry? “No. I would not leave my children and marry again. I feel good about myself. I just want to live here in my home.”

The reporters would like to thank Prayaag Joshi for spending time with us, and our teachers at CFL for their guidance and help in doing this story.

Inspired by PARI, two high school students of the Centre for Learning, Bangalore documented their meeting with a farmer during a school excursion to Chhattisgarh. PARI briefed them on different aspects of rural India and the process of documenting their research.

Manasa Kashi (Class 11) and Namitha Multineni (Class 12) are 16-year-old students of the Centre for Learning, Bengaluru.

Other stories by Manasa Kashi and Namitha Muktineni