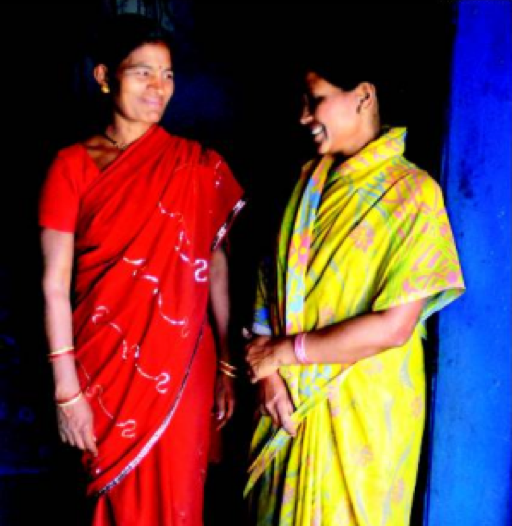 Farms and the woman

Today farming brings Ujjwala and Usha together; just a few years ago it was tragedy.

In a tiny home tucked away in a corner of Kurzadi village in Maharashtra's Wardha district, Ujjwala Petkar (41) engages in long discussions with her sister-in-law Usha Petkar (45) over which seeds can be sowed this year, what kind of crop will grow the next, and so on. If today farming brings them together, just a few years ago it was tragedy. Their husbands, who were brothers, committed suicide as they were loaned to the hilt and couldn't see a way out.

It was a difficult time for both women. As if the tragedy of losing their husbands was not enough, they were faced with a mountain of problems. Getting their children an education and paying off their husbands' debt was a priority but they had no clue how exactly to go about it.

"My world came crashing down after my husband committed suicide in 2002. My two children were little and not only did I not know anything about money, I didn't even know the details of my husband's farm. It was like I had to start life from scratch, " says Ujjwala, whose husband, Prabhakar, owed Rs 2 lakh when he died.

According to the rural development ministry, rural women form the most productive workforce in the economy of a majority of the developing nations, including India. Agriculture, the single-largest production endeavour in India contributing to 16 per cent of the GDP, is increasingly becoming a female activity. Beyond the conventional market-oriented, narrower definition of 'productive workers', almost all women in rural India can be considered 'farmers' in some sense, working as agricultural labourers or unpaid workers in family farm enterprises, and sometimes a combination of the two.

Taking all this into consideration, initiatives like the M S Swaminathan Research Foundation's Mahila Kisan Sashaktikaran Pariyojana project give a boost to women's involvement in agriculture. In 2008, the institute stepped into the scene with an aim to empower women hit by the agriculture crisis in 2008. It decided to concentrate on Wardha and Yavatmal, two of the most crisis-stricken districts in the Vidarbha region. The idea was simple: institutional building through sustainable agricultural practices.

The belief was that by empowering the woman of the family, the children would automatically benefit.

Soon, the Petkar sisters-in-law, along with other women, started getting involved in the project, which covered around 1, 354 women farmers organised into 86 women farmer groups across 55 villages. More than three years down the line, the success is out there to see.

About 100 women farmers have undertaken some form of sustainable agricultural practices which help them reduce the cost of cultivation. Over 250 women have established kitchen gardens which have helped them diversify their dietary basket and ultimately improve their nutritional status.

The most important outcome has been that many of them have started taking decisions regarding agricultural practices on their own.

Ujjwala, for instance, has managed to pay off a debt of Rs 1 lakh and get her daughter admitted into a nursing college. She now grows cotton, tur, soyabean and wheat on her five-acre irrigated land. She has also managed to get the land transferred to her name, something that is important after a man commits suicide. Usha, meanwhile, has managed to get one of her daughters married, and the other trained in nursing. Her two sons have taken up farming. "I managed to repay most of the Rs 1, 60,000 loan that my husband had taken. There's only Rs 25,000 left now, " she says. Her husband, Kavdoji, committed suicide in February 2006.

Kishor Jagtap, project coordinator at the institute, says this is only the beginning and it will still take long for major changes to be seen. "Along with women, we focus on children as well since they will inherit. Last year, we conducted a massive drive and found that more than 50 per cent women are anaemic. So a holistic approach is needed while empowering women to take their own decisions. Once changes are seen in women, the children benefit automatically. "

Indira Meshram from Takli village in Ralegaon block of Yavatmal district says she has become more confident over the last few years. A small farmer, she became part of the project in 2009. "I didn't know anything about farming; now I know everything from manure to the importance of food security. I take all the decisions at home, not only about farming but everything else as well. The decision to send my son for a bachelor's degree in social work was also mine, " she says. Meshram is now invited in the region to train other women and give talks about the importance of independence.

The research institute has helped form councils of women which meet every once in a while to discuss issues. "One woman teaches the other" is the mantra. Melas are held once a year for women to meet and share their experience.

Going by the success of the initiative, in 2010, finance minister Pranab Mukherjee budgeted Rs 100 crore for the Mahila Kisan Sashaktikaran Pariyojana and decided to extend it across the country. The programme became operational through the Union ministry of rural development, which invited applications from competent NGOs across India for the project, and the first review meeting took place in early April 2012, four months after the NGOs had begun their work.

Now, about 10 NGOs working in Maharashtra, Kerala, Bihar, Madhya Pradesh, Karnataka and Andhra Pradesh are partners in this project which aims to empower small and marginal women farmers, those belonging to the scheduled castes and tribes, minorities, widows, single women and so on.

Medha Nanivadekar, director of the Centre for Women's Studies at Shivaji University in Kolhapur said that such programmes are, indeed, very important. However, the government needs to be flexible and able to replicate them in different areas of the country based on their uniqueness and context. "Usually, government schemes look fantastic, " she says, "but when it comes to implementation it is often not possible because of ridiculous rules. "

The agriculture sector employs 80 per cent of all economically active women;they comprise 33 per cent of the agricultural labour force and 48 per cent of self-employed farmers. According to the National Sample Survey
Organisation, 18 per cent of farm families in India are headed by women.

This article was originally published on 26 May 2012 in The Times of India, The Crest Edition.