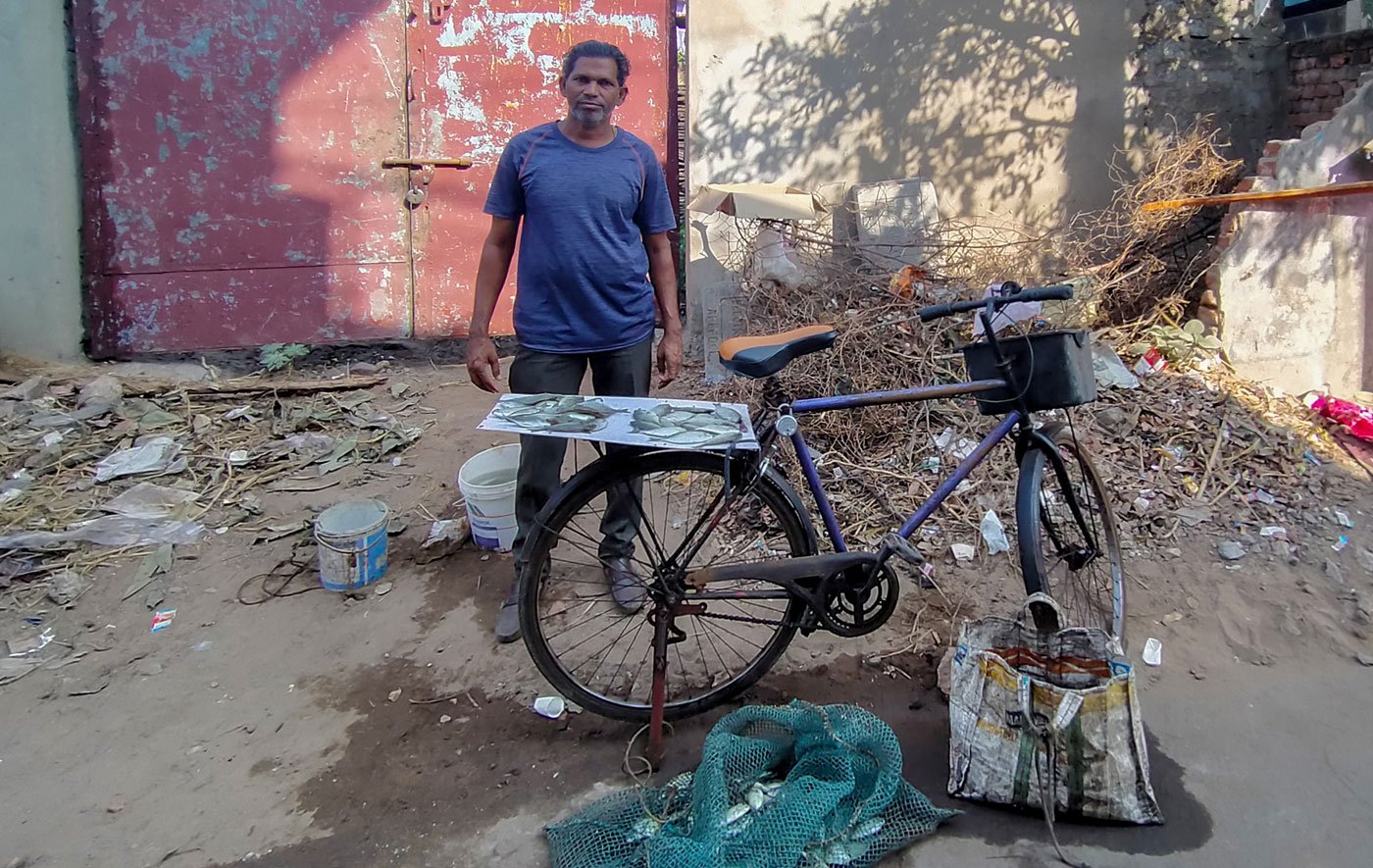 Fishermen in Visakhapatnam make their best profits in the two weeks before the annual April 15-June 14 ban on fishing during the breeding season. This year, that crucial period has come during the lockdown

It was pitch dark, but he couldn’t wait for sunrise. It was 2 a.m. and in another three hours, the cops would be there to restrain him. Kasarupu Dhanaraju and two of his colleagues slipped past where the police blockade would soon be active. A little later, they were free – and on the water.

“I was too scared to go in the beginning,” he says of his April 10 escapade. “I had to muster up courage. I needed money. I had to pay my rent.” Dhanaraju, 44, and his companions – all desperate fishermen – sneaked out to sea on his small boat with an outboard motor. Fishing and other activity on the jetty has been curbed due to the lockdown. And by 5 a.m. every day, police arrive at the two entrances to Fishing Harbour, Visakhapatnam. The market here is off limits to both public and fishermen.

Dhanaraju returned before sunrise with 6-7 kilograms of bangaru theega (common carp) “It was a close call,” he says. “The police came a few minutes after I returned. If they had caught me, they would have beaten me. But in desperate times, we have to do what we can to survive. Today I will pay my rent, but tomorrow something else might come up. I am not diagnosed with Covid-19, but it is still affecting me financially.”

He sold the fish secretly, away from the eyes of the police, in a makeshift stall set up by placing a whiteboard on his old rusted Roma cycle – on a narrow street behind Dr. NTR Beach Road in Chengal Rao Peta. “I wish I could take the cycle to the main road, but I feared the police,” says Dhanaraju, who sold the fish at Rs. 100 per kilo, instead of the usual Rs. 250.

Had Dhanaraju sold the 6-7 kilos of carp under normal circumstances, he would have earned between Rs. 1,500 to Rs. 1,750. However, his cycle fish-stall drew poor attention. And he could only sell his catch over two days – to make around Rs. 750. He was accompanied in his efforts by Pappu Devi, 46, a woman who helps cut and clean the fish for customers. For every cut and clean job, she gets Rs. 10-20 from the customer. She too was there, running the risk, for the money. 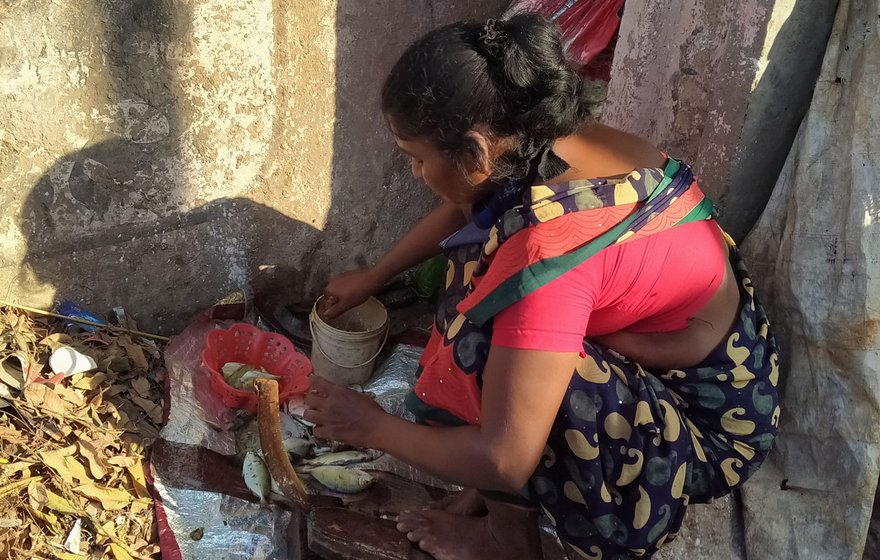 Left: Kasarapu Dhanaraju sold the fish secretly, on a 'stall' on his old rusted cycle. Right: Pappu Devi, who cleans and cuts the fish, says, 'I think I will survive [this period]'

When the jetty used to be fully functional, Pappu Devi would earn Rs. 200-250 a day. Cutting and cleaning fish was the only job she had. “I am down to one meal per day now. I have to survive until June. Maybe due to the virus, it [lockdown period] can go beyond June,” she says. She is silent for a moment, then says optimistically, “I think I will survive.” A widow, and mother of two, she is originally from Ippalavalasa village in Mentada tehsil of Vizianagaram district in Andhra Pradesh.

Devi had sent her daughters to Ippalavalasa in March, to her parents' home. “To take care of my parents,” she says. I was to go there too, this month. But now that seems impossible.”

As of April 2, 2020, fishermen were officially not allowed to venture out to sea. Also, there is the annual 61-day fishing ban during breeding season – from April 15 to June 14. This means the movement of motorised and mechanised boats during this period is restricted, to conserve fish stock. “I stopped fishing on March 15 because for almost a fortnight I sold my catch for only half – or less than half – the regular price,” says Vasupalle Apparao, 55, a fisherman residing in the same Chengal Rao Peta area. “In March, I was only able to earn Rs. 5,000.” Usually, he earns Rs. 10,000-15,000 a month.

“We make better profits in the first two weeks of April [before the annual ban kicks in] as there are usually a lot of buyers then,” Apparao explains. “Last year, I made Rs. 15,000 in 10-15 days before the breeding season,” he says excitedly. 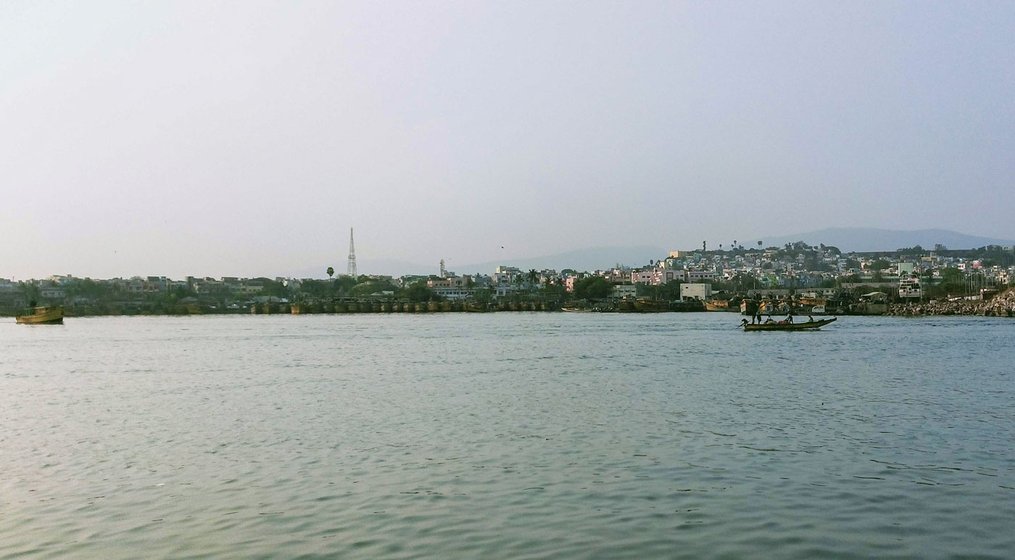 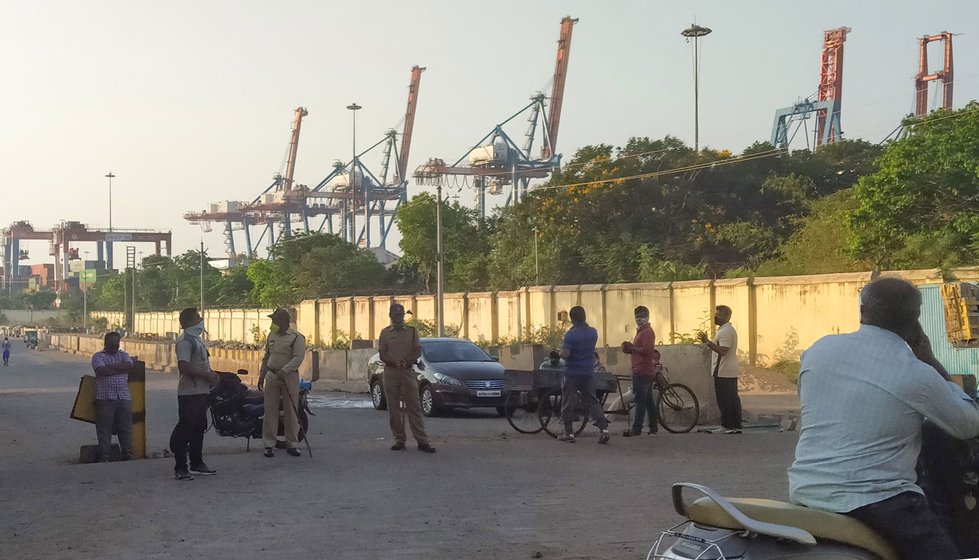 Left: The Fishing Harbour in Visakhapatnam (file photo). As of April 2, 2020, fishermen were officially not allowed to venture out to sea. Right: The police has been guarding the entrance to the jetty and fish market during the lockdown

This year, as early as the first week of March, fish prices went down drastically – vanjaram (seer fish) and sanduvai (pomfret), usually sold at Rs. 1,000 a kilogram, were going at Rs. 400-Rs. 500 a kilo. According to Apparao, this was due to coronavirus-driven panic. “One man came and told me that I should stop casting my nets because fish carry the virus from China,” he laughs. “I am not educated, but I do not think this is true.”

Apparao sees hardship ahead despite receiving the free rations stipulated by the government – five kilograms of rice per person. “The breeding season is a very difficult time any year, but we got by due to profits in the weeks before that period,” he says. “This time is different. We have no income, no profits.”

On April 12, the state government relaxed the lockdown, very briefly, for fishermen, allowing them to venture out to sea for three days. In any case, the breeding season ban would kick in at the end of those 72 hours. That came as a relief to the fishermen – but “it is too little time,” Apparao feels, “and customers will be far fewer due to the lockdown.”

A narrow street in Chengal Rao Peta is also home to Chinthapalle Thatharao, where his dwelling is one among many that look like a pile of matchboxes stacked together unevenly. A narrow staircase in one of these leads to his dimly lit abode. Thatharao, a 48-year-old fisherman, wakes up early in the morning and walks to the nearest point from where he can see the beach. That’s as far as he can go in the lockdown period Like Pappu Devi, he too is originally from Ippalavalasa in Vizianagaram district. 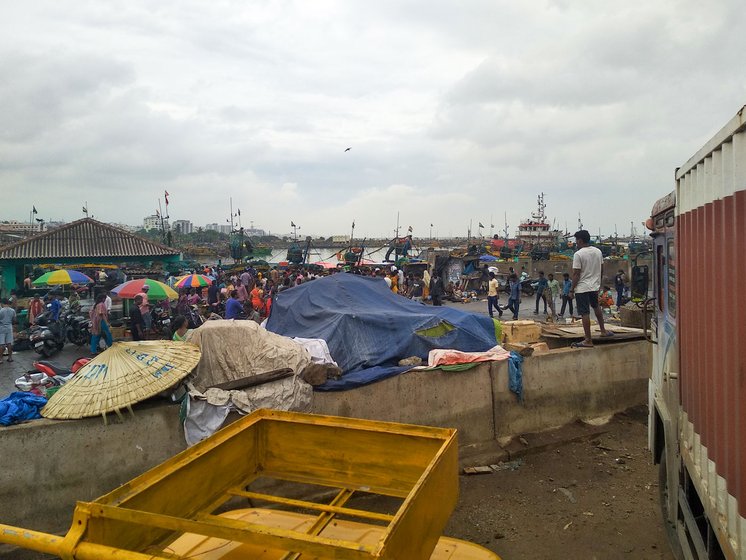 Left: The three-day relaxation in the lockdown 'is too little time', says Vasupalle Apparao. Right: Trying to sell prawns amid the lockdown

“I miss the ocean. I miss the jetty. I miss the fish,” he says, smiling sadly. He also misses the income that came with the fish. The last time he went to sea was on March 26, 2020.

“Despite storing them on ice, a lot of fish got leftover that week,” says Thatharao. “I am happy it did,” says his wife Sathya, cutting in, “we got to eat good fish!”

For Sathya, 42, a homemaker who also helps Thatharao sell his catch, the house has been livelier since the lockdown. “Generally, I am alone; now my son and my husband are at home. It has been many months since we sat together for lunch or dinner. Despite the financial difficulties, I like that we are spending time with each other,” she says, glowing with happiness.

As for Thatharao, he is still figuring out how to clear the loan he took to buy his boat two years ago. He says he might turn to a loan shark – and try paying off the debt by the year-end. “Three days of fishing [the relaxation period] makes no difference, with the price we get for our catch now being so low,” he says. “Selling the fish for a decent price will be more difficult than catching it.”

“I worry about my son, too. He lost his job last month,” he says. Chinthapalle Tarun, 21, worked as a welder in a private company until his contract ended in February. “I was searching for employment, but coronavirus…” he sighs. 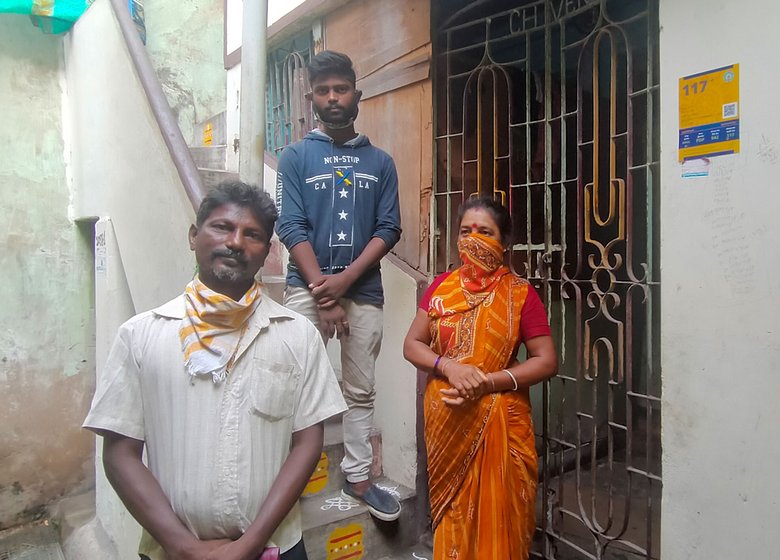 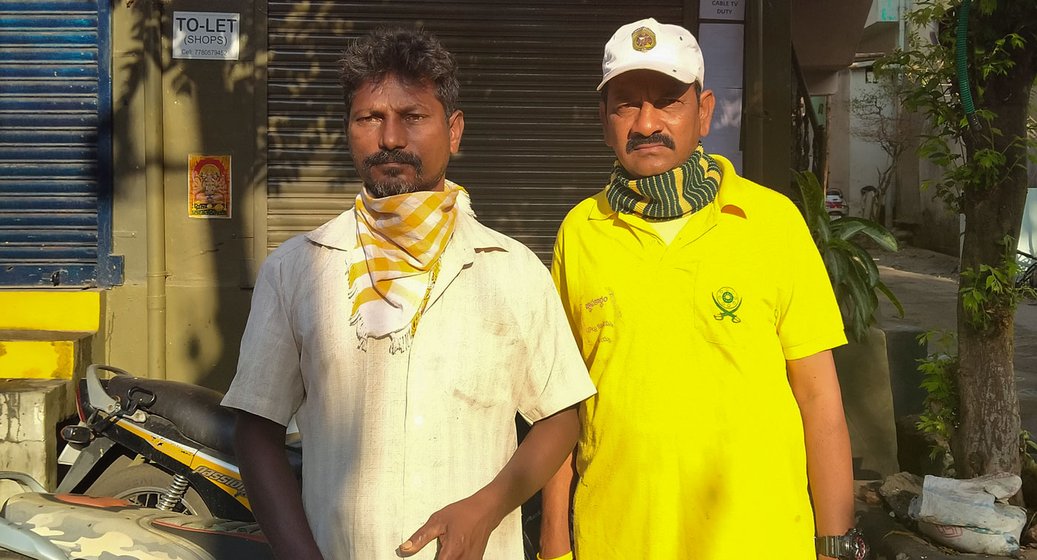 “We are slum-dwellers, and for us social distancing is impossible. So far no one has tested positive in this area, but god forbid, if someone does – there’s no rescuing us, I suppose,” says Thatharao. “No mask or hand sanitiser can save us then.” He has no surgical mask and instead ties a handkerchief around his face. Sathya covers her face with her saree pallu .

“The odds do not seem to be in our favour,” says Thatharao, forcing a smile. “If the virus affects me or anyone in my family, we don’t have the money for medical treatment.” And, says Sathya, “none of us has health insurance or savings, we only have loans to repay and hunger to curb.”

Thatharao, Sathya and Pappu Devi are among many others in the fishing community of Visakhapatnam who migrated here from other places. In other years, they return occasionally to their villages, usually, during the two months of the breeding season. This time, there is little chance of their doing so.

“Earlier, we didn’t pay the rent for those two months – now we have to,” says Thatharao. “During the breeding period, we look [back in his village] for small odd jobs on the farms of others, which fetches us Rs. 50 a day.” That work usually entails protecting crop and farm products from wild animals.

“Sometimes I mess up that job,” he laughs. “Fishermen don’t know any other brathuku theruvu [trade or profession]. For now, we just hope that the virus won’t be there after the fish breeding period.”

Thanks to Madhu Narava, bureau chief, Prajasakti, Visakhapatnam, for his photographs.