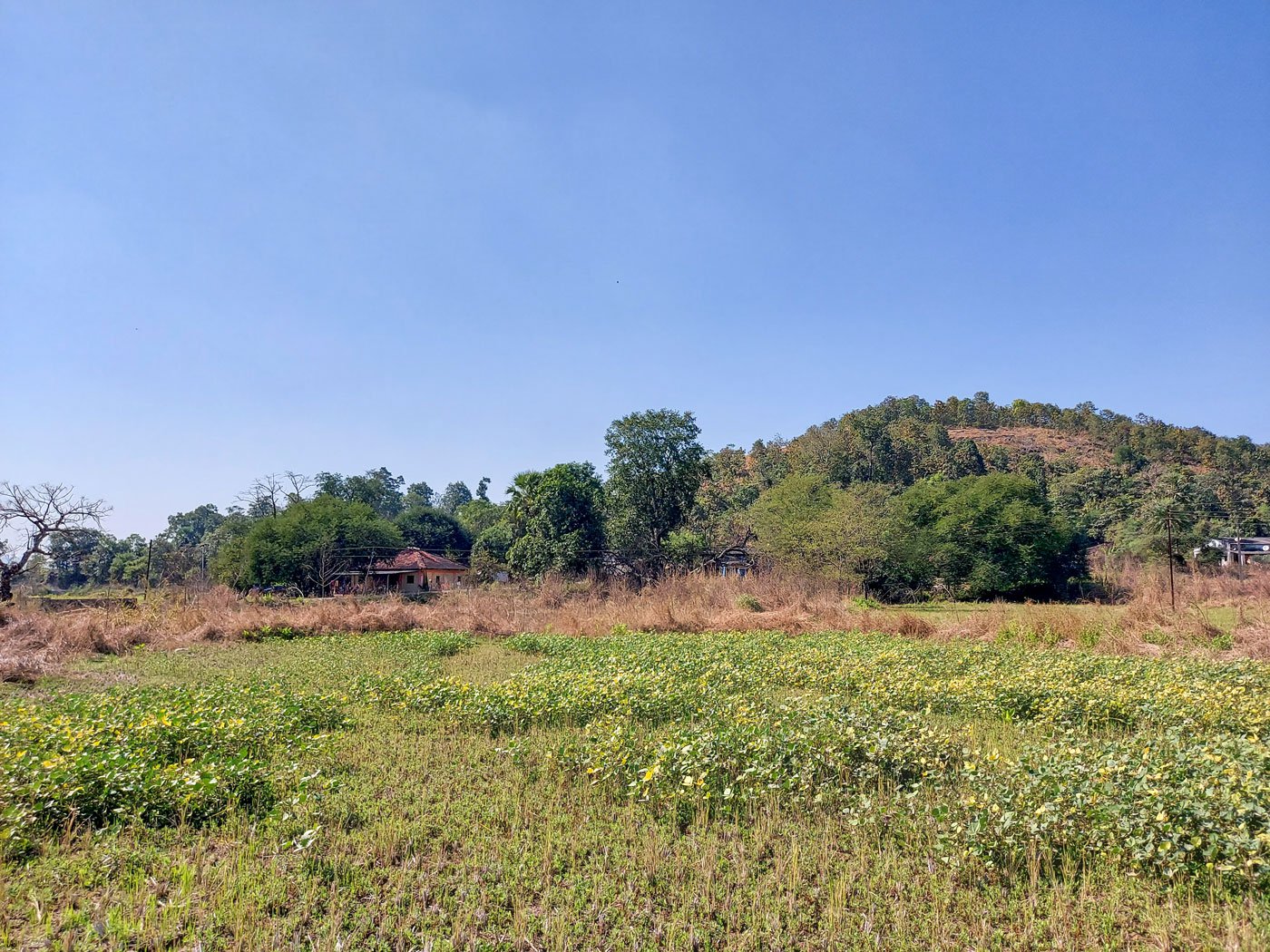 The Warli Adivasis of Nimbavali were tricked into giving up their land and homes for the Mumbai-Vadodara expressway, but the project tore through the village and the compensation was inadequate

A group of middle-aged men have gathered under a tree in my village, Nimbavali, in Maharashtra’s Palghar district, discussing the events of nearly 10 years ago whose implications are felt even today. A team of government officials had stopped by in a big car, armed with papers, measuring equipment, rulers and tapes. They had searched for spots to dig to access underground water, recalled Baba, my father Parshuram Pared, 55.

“I remember them well. When we repeatedly asked what they were doing, they shot back ‘You need water, isn’t it?’ We said we do. Paani kise nahi mangta [who doesn’t want water]?,” Baba recalled. In a water-scarce region, any water source that the government could locate was welcome, but the anticipated joy of the villagers was short-lived.

Months later, the Warlis of Nimbavali, in Wada taluka , received official notices of eviction. There was no water project, instead the village land had been earmarked for the Mumbai-Vadodara National Express Highway.

“It was only then that we got to know about the highway,” said Balkrushna Lipat, 50. That was 2012. A decade later, my village is still struggling to come to terms with the deceptive land acquisition. Many know it’s a losing battle against the might of the state and have narrowed down their demands from higher compensation and alternative land back then to proper resettlement of the entire village. 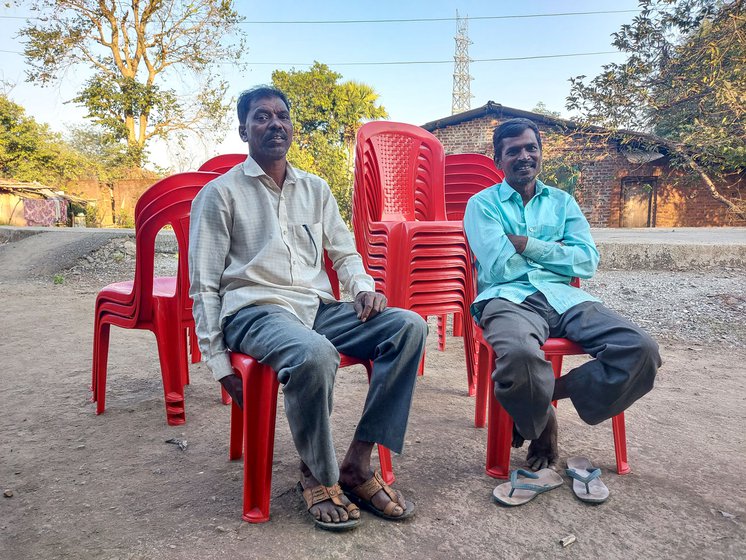 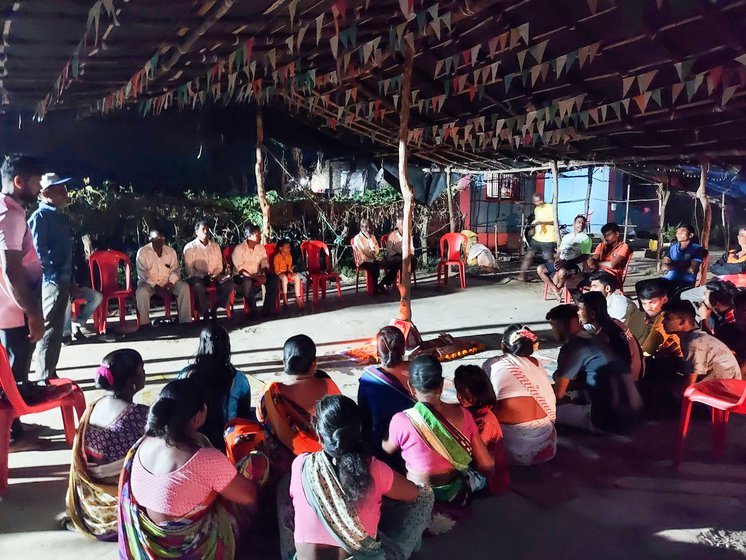 Left: Parashuram Pared (left) and Baban Tambadi, recall how land in Nimbavali was acquired for the Mumbai-Vadodara National Express Highway. Right: Residents of the village discussing their concerns about resettlement

The Bharatiya Janata Party government at the centre set out to acquire land for the eight-lane 379-kilometre highway that passes through Maharashtra, Gujarat, and Dadra and Nagar Haveli. A part of the Maharashtra section cuts through 21 villages across three talukas of Palghar district. Wada is one such taluka and Nimbavali a small village in it, comprising about 140 households.

Barely 5.4 kilometres of the highway runs through Nimbavali. A total of 71,035 square metres in Nimbavali was identified, and the process of acquisition began before the villagers stonewalled it.

When the villagers realised the truth about the project, the elders were assured that people would be given adequate monetary compensation for their houses. The money was for buying new land and constructing homes. But residents of our village rejected this and declared that none of us would leave our land or home unless given alternative land to relocate.

“We received notices of nine lakh rupees as compensation on average,” said Chandrakant Pared, 45. “What for? Look at all these trees – shevga , sitaphal , chikoo and kadipatta . We grew all the tubers and root vegetables on this land. How much money did they offer for all this? Nothing. Can you buy land, build a house and plant all these trees for nine lakhs?” he asked. 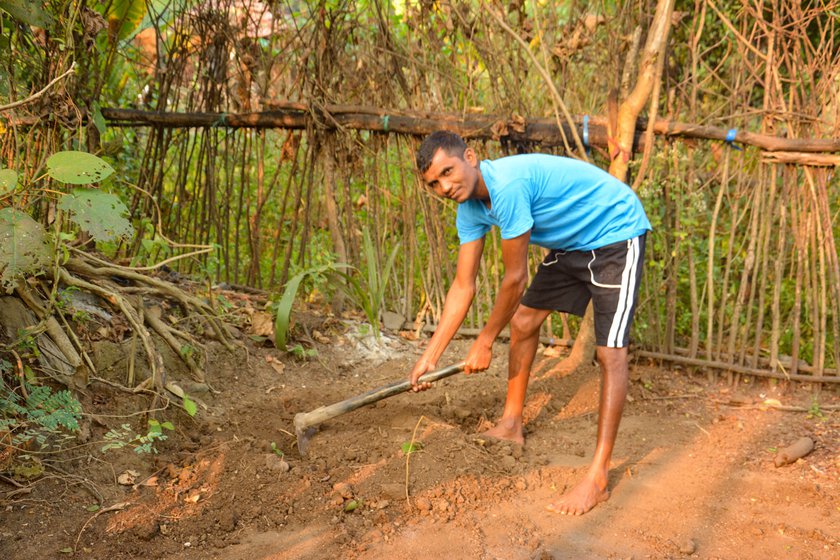 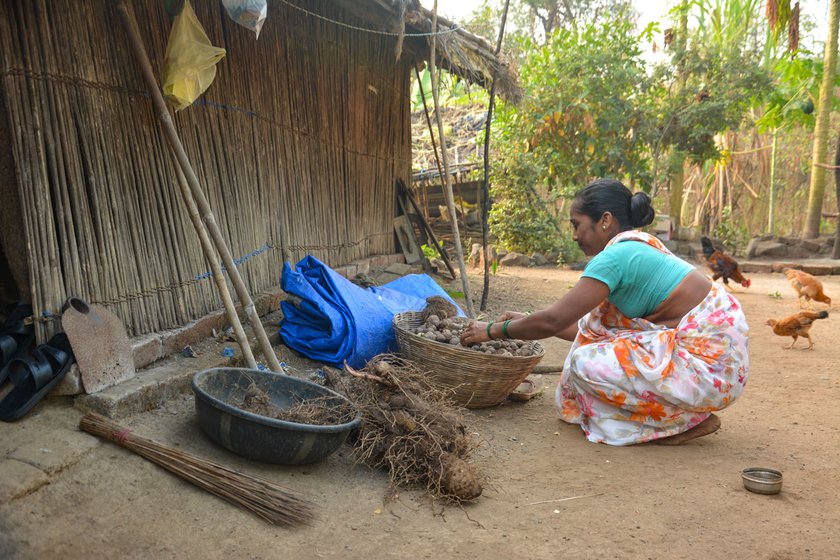 Left: Chandrakant Pared at his home in the village. "Can you buy land, build a house and plant all these trees for nine lakhs?” he asks. Right: Rajashree Pared shows the tubers and root vegetables cultivated by them

There was another issue: the highway tore through the village, dividing it into two. “People of Nimbavali want to live together as we have done for ages. We want land as compensation of our existing gaothan , but we also want the government to include all the houses in the compensation package. We want fair compensation for all the people here. You want to build this road as a mark of development? Please do. We have no issues. But why destroy us?” asked Vinod Kakad.

The project has brought uncertainty into our lives. As many as 200-220 people in 49 houses are directly affected by the road alignment while four homes have escaped eviction because the road alignment does not touch them. Three of the four affected are on forest land, and the government has dithered over even considering them as worthy of compensation.

We, the Warli tribe, have lived on this soil for centuries. We not only built our homes here but also cherish a dear relationship with the land. The shade of the tamarind, mango and other trees has soothed us in harsh summers, and the Saparya mountain provided us with firewood. It pains us to leave it all and go someplace else. It’s equally painful to leave some of our own people behind, breaking up our community.

“The officers who came to measure the land were surprised at our solidarity. They said that those who are losing their house are obviously in distress. But here, those who do not have to relocate are also crying,” said Savita Lipat, 45. “I tried to tell him that the house in front of our home and the one in the back are being acquired for the road. My house is right in the middle. The road is going to be a big trouble for us.” 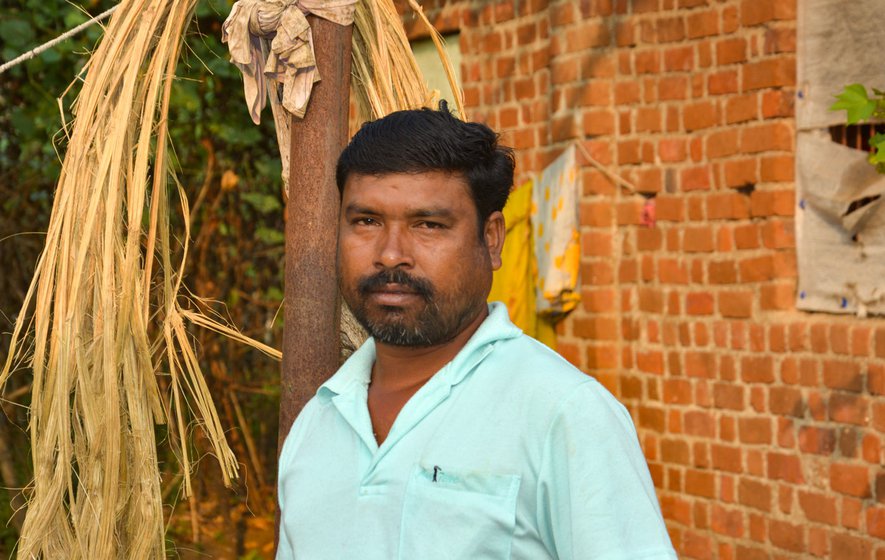 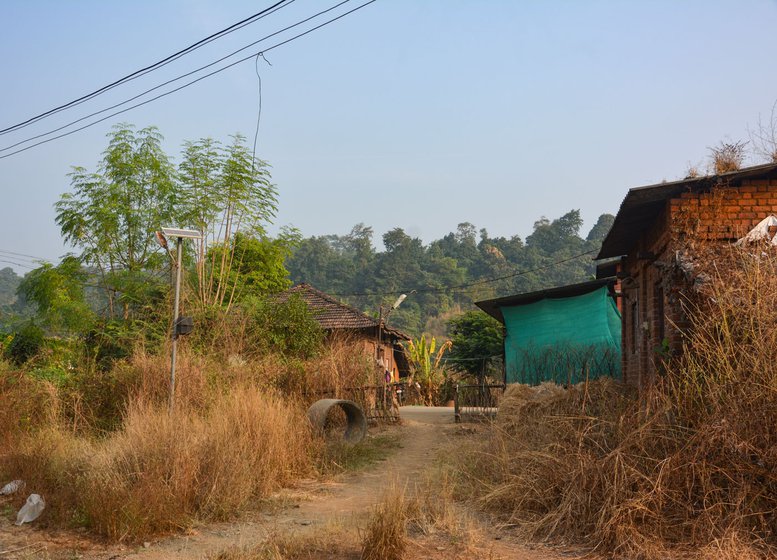 Balakrushna Lipat (left), outside his house in Nimbavali. Right: As many as 49 houses in the village are directly affected by the road alignment

If the road separating people who had lived together for decades was bad, worse was to come. A few houses on either side of the highway were not even shown on the map or in official papers; they had been left out entirely. And another 3-4 houses were shown constructed on forest land. Villagers have been arguing with the government that all families be rehabilitated together, but the authorities fail to recognise this collective need of the Warlis to be together.

“I have lived here for so many years. See this old tax receipt of the house. But now the government is saying that I have encroached upon forest land and I am not eligible for compensation. Where shall I go now?” asked Damu Pared, 80, waving a few old official papers at me. He is my grandfather’s brother. “I can’t comprehend all this. You are educated and young. Now you take this up,” he added and fell silent.

Darshana Pared, 45, and Govind Kakad, 70, are among those whose homes are shown to be on forest land. Both had built their houses under the Indira Awaas Yojana, paid property tax every year, and the houses were served by a metered electricity connection provided by the government. However, during the mapping for the highway, their houses were declared as encroachments on forest land, which meant they were not eligible for compensation.

This is a complicated struggle spread over years that initially brought people together but later segregated their demands. It began with opposition to the project, then people decided to demand higher compensation collectively, and it later became a fight for rightful resettlement of all families of Nimbavali. 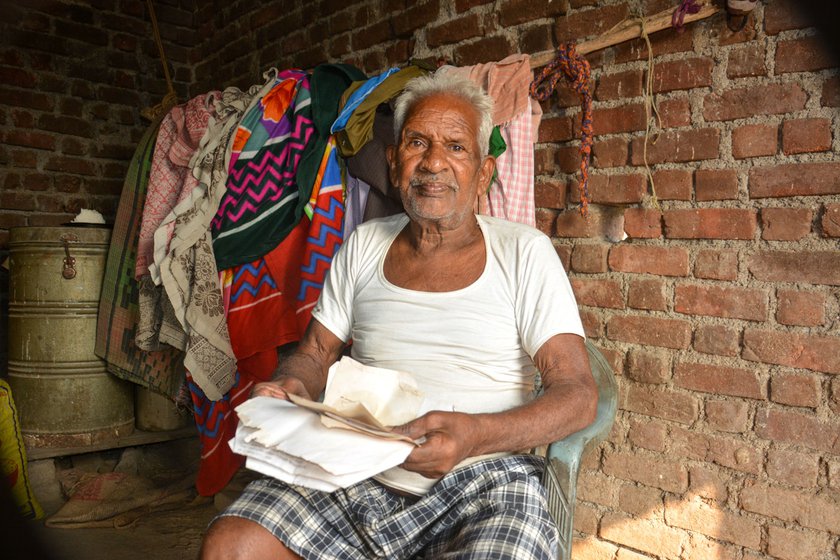 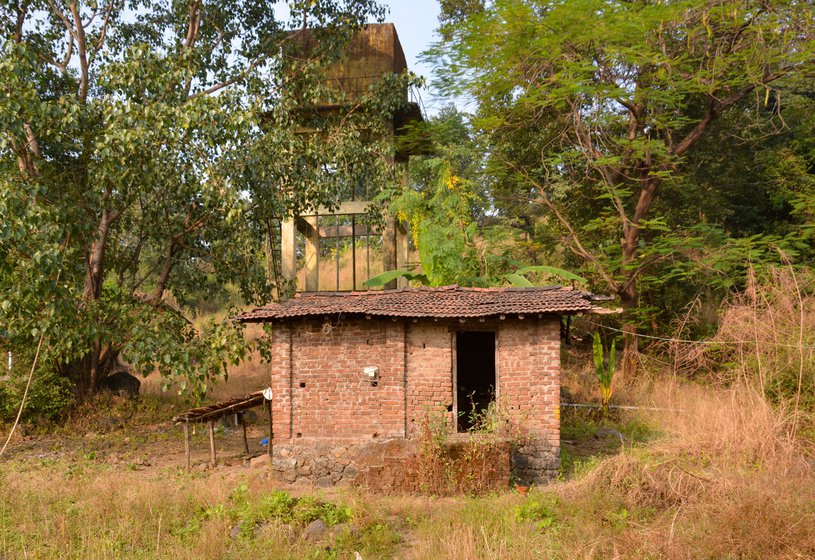 Damu Pared with old tax receipts of his home (right). He says, “I have lived here for many years, but now the government is saying that I have encroached on forest land"

“People from different political factions, organisations and unions came together under one independent banner – Shetkari Kalyankari Sanghatana. This front mobilised people, took out rallies, held protests and negotiated with the government for higher compensation. But after this was done, the farmers and leaders of the Sanghatana left the rest of us to their fate. The rightful resettlement issue went on the back burner,” said Baba.

Krishna Bhoir, former chairperson of Shetkari Kalyankari Sanghatana, refuted this. “We organised people to fight for fair compensation. We also raised questions on issues which would affect people’s daily lives after the highway was built. For example, how would people cross the highway, how would students go to schools and colleges, what would they do if water from the streams entered the villages and fields? We fought hard but when people received some compensation money, they forgot everything,” he explained.

Amidst all this, Arun Patil, a non-Adivasi, Kunbi farmer, claimed that some of the land on which the Warlis lived, adjoining his farm, belonged to him. So, he should be compensated. However, that turned out to be wrong. “We kept aside all our work and made several trips to the revenue office. Finally, it was confirmed that all our houses are in the gaothan area,” recalled Dileep Lokhande, 64. 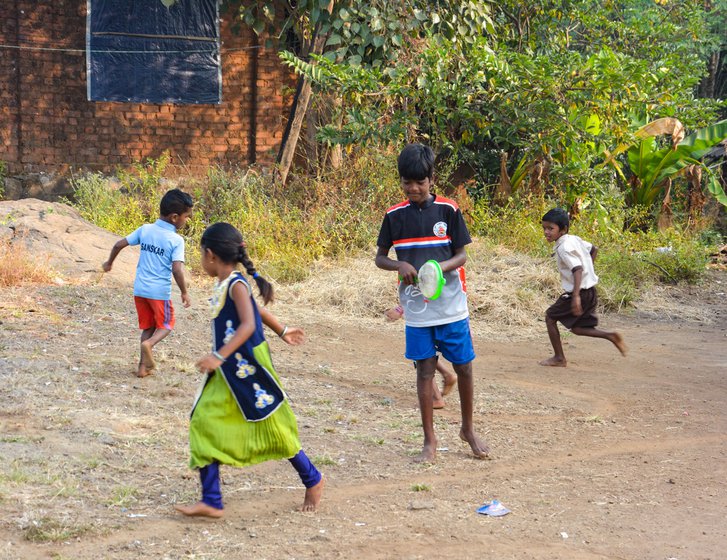 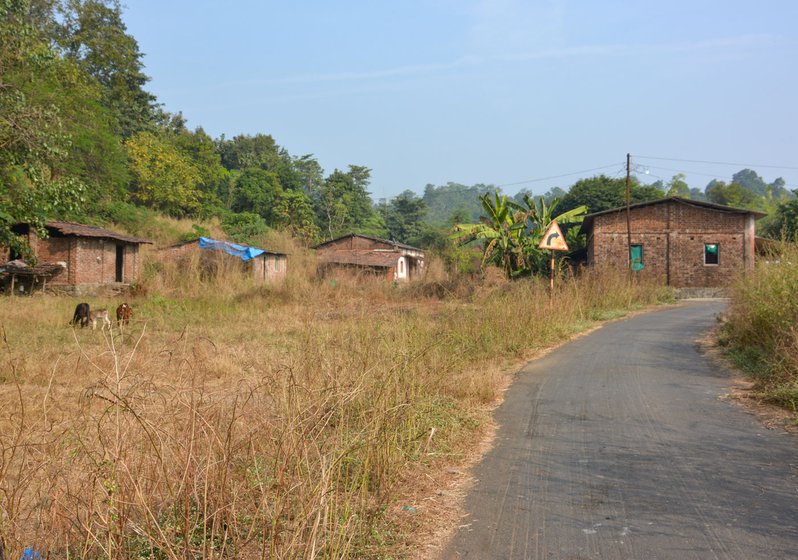 Left: Children playing in the village. Right: Houses at the foot of Saparya hill, which the government claims is on forest land and ineligible for compensation

Lokhande’s home in Garelpada, the Adivasi hamlet in Nimbavali, is spread over five acres of gaothan (government-allotted village land). The Warlis had applied to the Department of Land Records for an accurate demarcation of the land. Officials came but did not complete their task on the pretext that forest officials were not present on the occasion.

Even those eligible for compensation are worried for their future. Family heads say it is next to impossible to build another house with the paltry compensation announced. “We are not allowed to build on forest land. Where do we, the Adivasis, go to make way for your development projects?” asked Baban Tambadi, 52.

Each time they approach the sub-divisional officer, the residents of Nimbavali come away with promises and assurances. “We wait for it to come true. Till then the struggle for land continues,” says Baba.

The highway holds no benefits for the Warlis of Nimbavali, but they are being displaced from the gaothan without a plan for complete rehabilitation. I have seen my fellow villagers fight for years and they continue to fight even when it seems like a losing battle.

This story was edited by Smruti Koppikar. Smruti is an independent journalist and columnist, and a media educator.