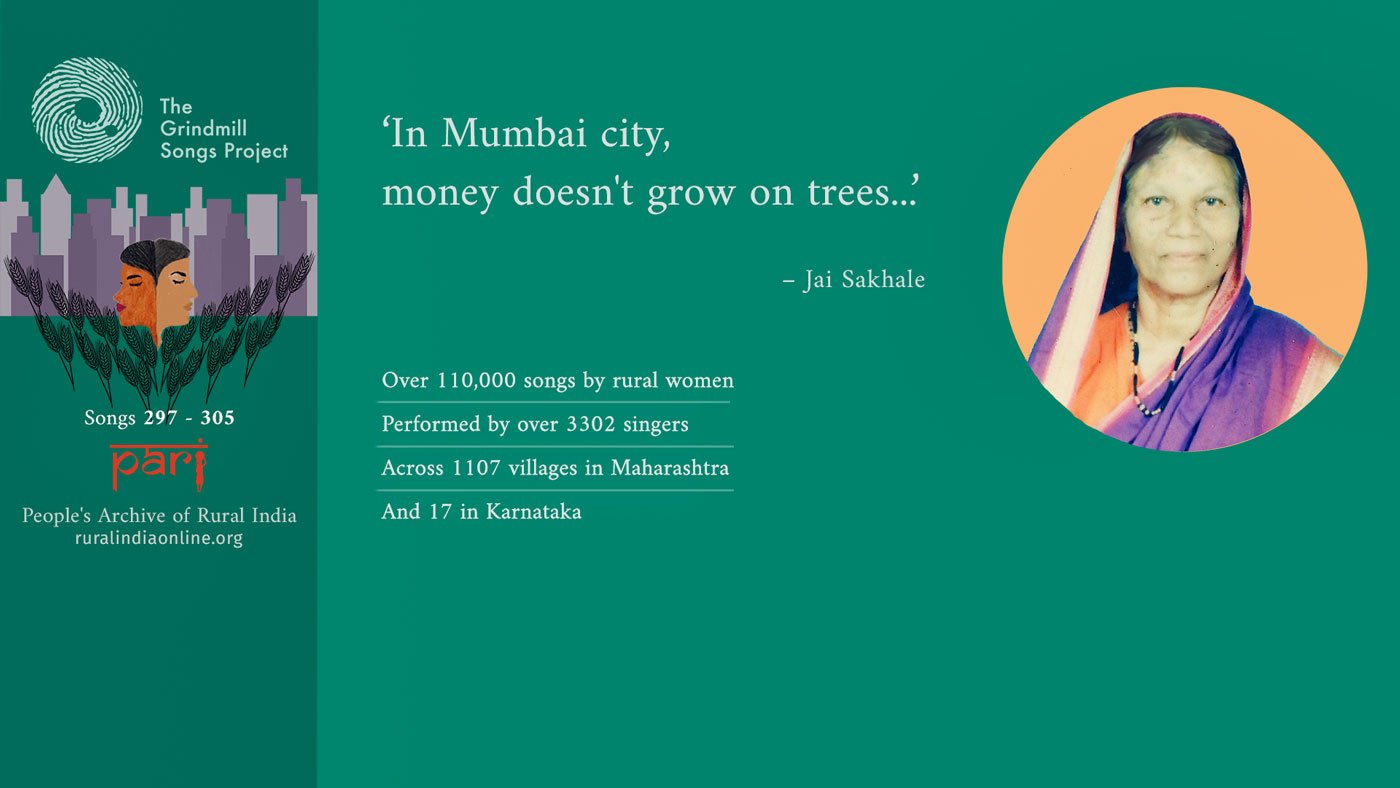 ‘A drop of sweat is worth a lakh of rupees’

Jai Sakhale sings about people migrating from the village to work in Mumbai, and about the mother who worries for her son working hard in the demanding city

“Many women from the villages saw their sons go away to Mumbai to work at the cotton mills. They would stretch their arms and twist them at the wrists continuously when they worked at the mill,” said Kusumtai Sonawane about these ovi when we spoke on the phone in June this year. “Some men also worked at construction sites, carrying headloads of gravel or sacks of cement on their backs. At the end of the day, they felt so tired, as if their bones were wrung dry of strength. And the mother felt that a drop of her son’s sweat was worth a lakh of rupees.”

Then, pausing for a moment, she added, “There were others too, who cleaned the city’s gutters.”

Kusumtai, from Nandgaon village of Mulshi taluka in Pune district, was present when the original Grindmill Songs Project team recorded Jai Sakhale singing the songs featured here, two decades ago. The songs were recorded on audiotapes in October 1999 and later converted into digital formats. Jai Sakhale was from Lavharde village in Mulshi. She died in 2012. Some of her other songs have been published by PARI (see The farmer and the rain song ).

The nine ovi in this instalment take us back to the times when people from rural Maharashtra migrated to Bombay (now Mumbai). Historical records show that the growth of Bombay into a major trading town in the mid-1700s, and the establishment of the Port Trust and textile mills in the 1800s, brought people from other parts of the country to the city in search of work and income. Rural migrants from the hinterlands of Maharashtra came to the growing city mainly from the Konkan coast and Pune, Nashik and Satara and other towns and villages in the Western Ghats region. 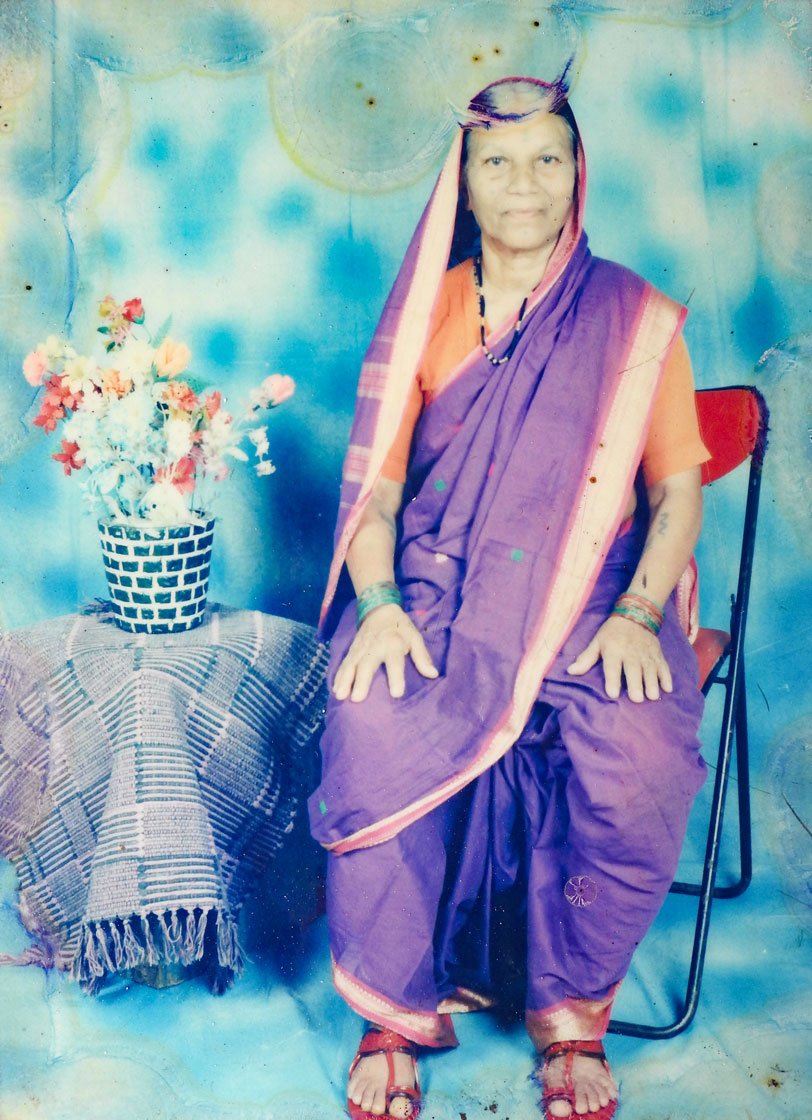 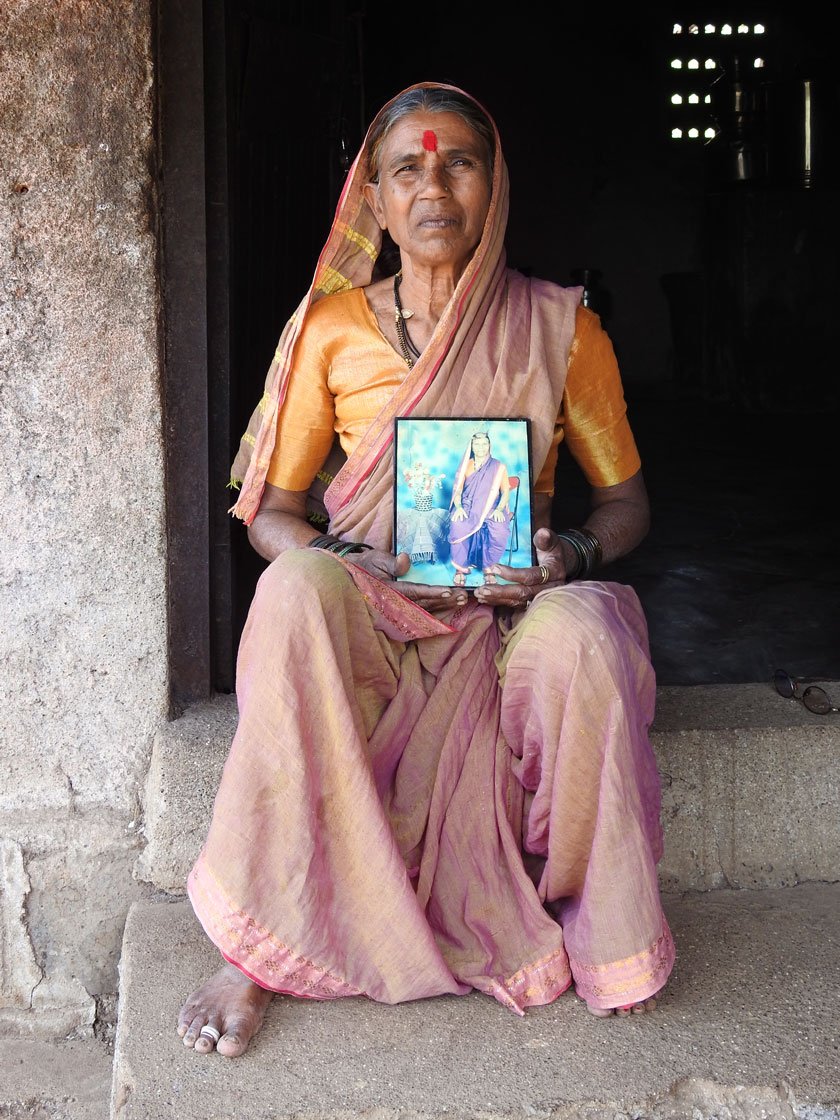 The late Jai Sakhale (left) and her daughter, Lilabai Shinde, with her mother's photo

The tales of life in Mumbai and comparisons with the rural way of living form the basis of these couplets. One song unravels the compulsions of a new kind of existence and the changes it brought to human relationships, even between siblings. Every type of give and take between people living in the city held a commercial value, and this stark reality of life is juxtaposed against the traditional and the familial that was the norm in the villages.

These ovi were probably composed in the pre-Independence period and handed down through generations of village women. The first couplet refers to the mother’s pride that her son has learnt to speak English – the language of the sahebs – and so he is offered a chair to sit on. In the second ovi , the singer compares the crowded city of Mumbai to a place where she finds that every street is full of glass tumblers. And there are so many people that everyone looks alike; it is difficult for the mother to find her son. The tumblers look identical but only one will quench her thirst. She seems to ask: ‘Where is the glass that is my son?’

In the third verse, the singer-narrator spots what seems like a novelty to her, and observes a practice that’s contrary to tradition. The taps seen in Mumbai’s lanes get her attention. She realises that a woman here does not have to draw water from a well, or walk long distances to fetch it from a river, as the narrator would have to in her village. In the second line, she says that a woman running a khanaval , or food mess, charges even her own brother for a meal – which wasn’t the norm at home. The commercial nature of dealings in Mumbai is revealed here. 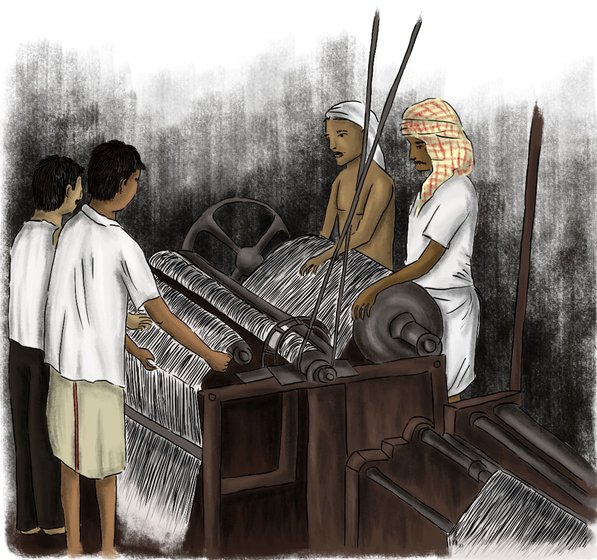 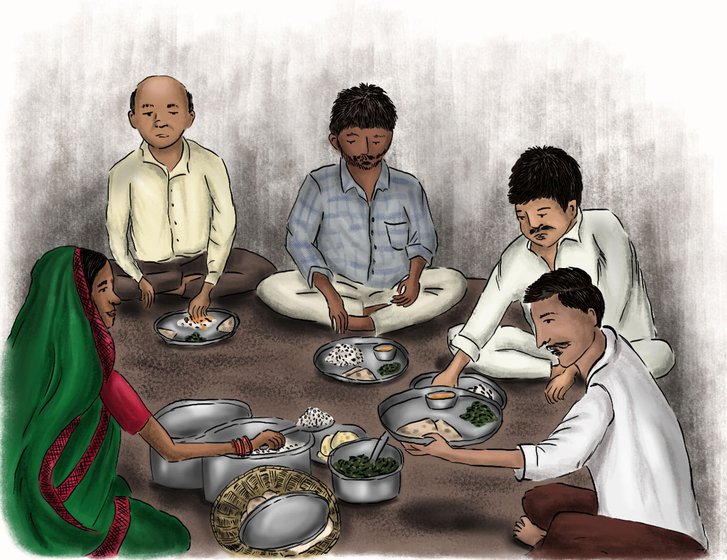 Left: Workers in the cotton mills of 19-century Mumbai used to strain their arms a lot, leaving them bone-tired at the end of the day. Right: Migrants in the city preferred the affordable meals served at a khanaval, or food mess, usually run by a woman. Illustrations: Antara Raman

The singer says in the fourth couplet that she has walked all over Mumbai in search of her son, right up to the Kulabyachi Dandi (‘Colaba’s tip’) “on the left side”. It is a reference to  the city’s old British quarter, Colaba, and the part of it that forms the southernmost tip of Mumbai.

In the following three couplets, Jai Sakhale sings about a woman’s migration to Mumbai. Although she could not afford oil for her hair in the village, her life has changed after going to the city. She no longer sits on the floor like she used to in her village home. But the woman misses her village, and instead of eating fish like many do in Mumbai, when she returns home she looks for kurdu, a leafy vegetable, in the fields. She is excited and dresses well when she leaves her village to go to Mumbai. But barely halfway there, while travelling through the scenic Khandala ghat , her mind starts to wander. She anticipates the difficult times ahead and remembers her parents – for they will not be with her in the city.

In the last two ovi , the singer gives voice to a mother’s feelings for her young son working in Mumbai – possibly in a cotton mill. Money doesn’t grow on trees, she says, and her son works so hard every day that his bones are wrung out of all energy. Even after days upon days of hard work, he earns very little. But, she says, her son’s labour and sweat is worth a lakh of rupees.

Listen to the nine ovi sung by Jai Sakhale

My son can speak English, the sahebs ’ language
They offered my son a chair to sit on

In Mumbai, the lanes are filled with glass [tumblers]
Where shall I find my son [in this crowd]

The woman who went to Mumbai, she no longer sits on the floor
Back in her village, she didn’t even have oil for her hair

The woman is leaving for Mumbai, she does not eat fish [there]
She returns to her village and looks for kurdu [a leafy vegetable] in the fields

The woman was all dressed up to go to Mumbai
At Khandala ghat , she remembered her mother and father

In Mumbai city, money doesn’t come for free
My son’s sweat is worth a lakh of rupees 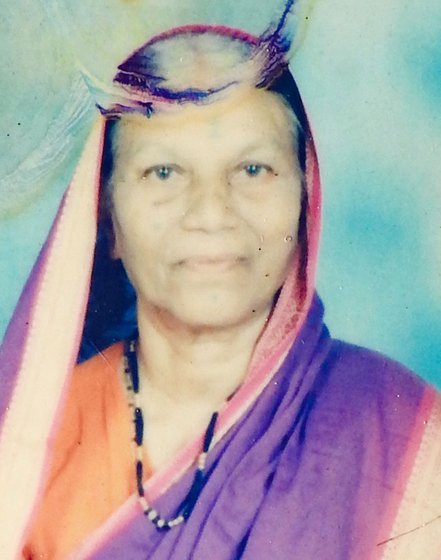