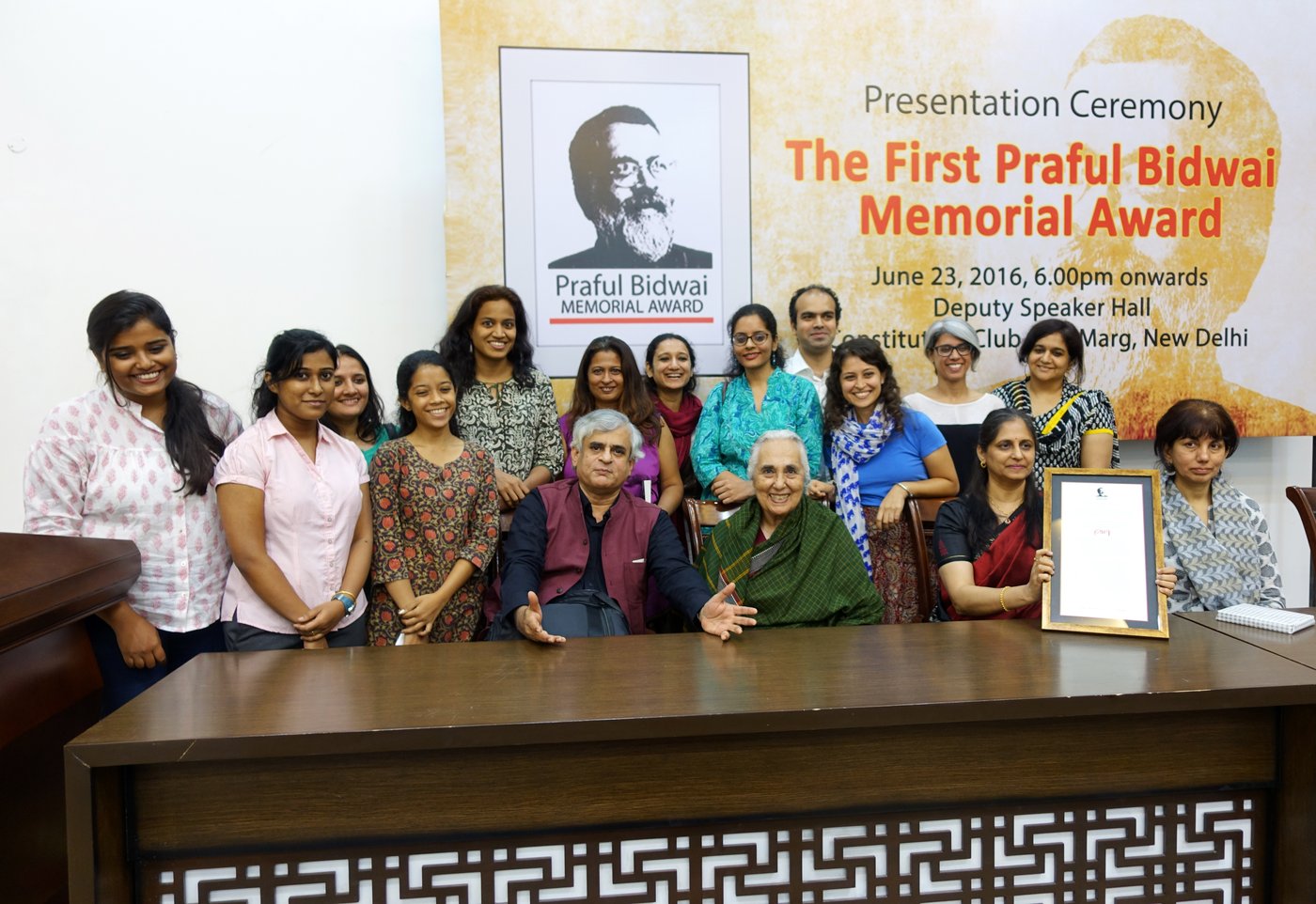 Prof. Romila Thapar read out the citation at the award ceremony in New Delhi on June 23, 2016 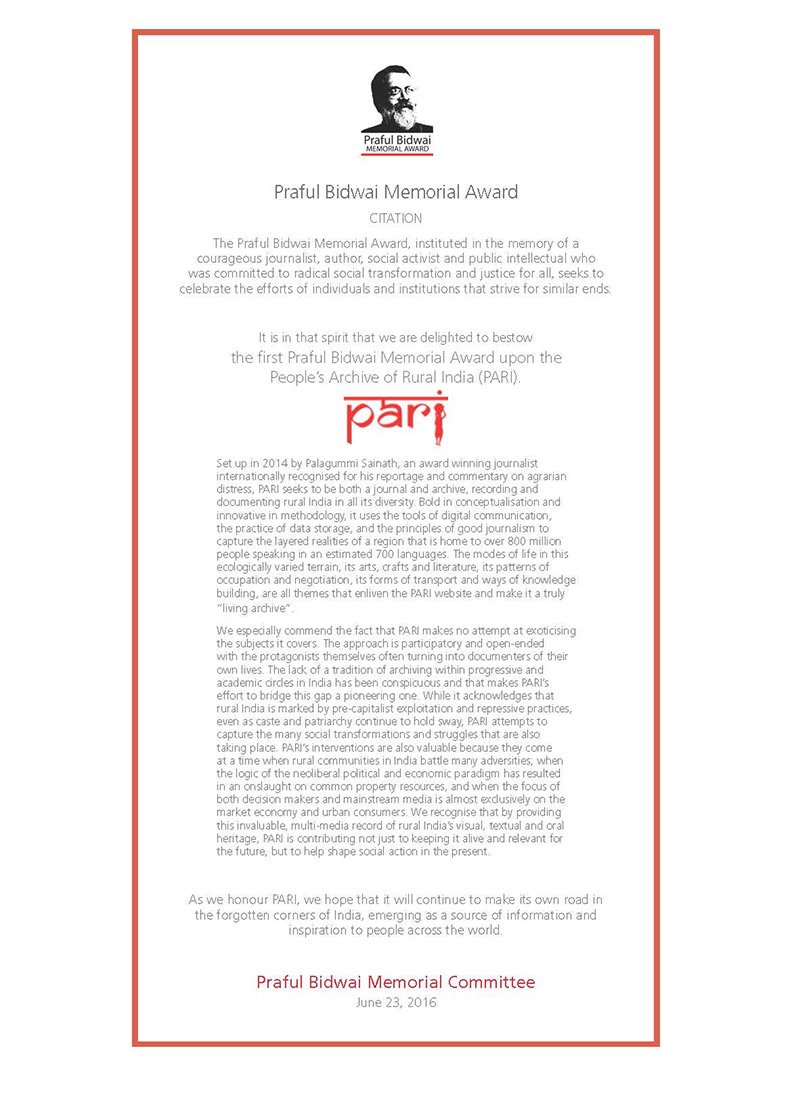 The first Praful Bidwai Memorial Award was given to the People's Archive of Rural India (PARI), which was set up in 2014 by noted journalist and commentator, Palagummi Sainath.

According to the award citation, PARI is being recognised for recording and documenting rural India in all its diversity: “Bold in conceptualisation and innovative in methodology, it uses the tools of digital communication, the practice of data storage, and the principles of good journalism to capture the layered realities of a region that is home to over 800 million people speaking in an estimated 700 languages.”

The award was set up to commemorate the life and work of one of India’s most outstanding journalists as well as accomplished author, committed activist and public intellectual, so that his legacy will inspire others. Bidwai was an extremely successful columnist, whose articles on a range of subjects appeared regularly in newspapers and journals in India and globally for over two decades. He was also an internationally recognised and awarded author, a much valued Fellow of the Transnational Institute, Amsterdam, and his last book, The Phoenix Moment , which was published posthumously in December 2015, was a magisterial look at the role of Left parties in India. A compilation of his selected writings on nuclear energy and nuclear disarmament has just been brought out by the Coalition for Nuclear Disarmament and Peace (CNDP), India, of which he was a founding member.

The award ceremony was held at Constitution Club, New Delhi, on June 23, 2016, which marked his first death anniversary. Five representatives of the PARI team received the award from Meera Ganorkar, Bidwai’s sister. Professor Romila Thapar chaired the event, during which the editor of the Economic and Political Weekly , Paranjoy Guha Thakurta, as well as P. Sainath, spoke about the crisis of journalism in contemporary India and how it can be addressed.

The informally constituted Praful Bidwai Memorial Committee, set up by his friends shortly after his death last year, is anchoring this annual event.

Taken from a report published on the South Asia Citizen's Web .

This is the full citation:

The Praful Bidwai Memorial Award, instituted in the memory of a courageous journalist, author, social activist and public intellectual who was committed to radical social transformation and justice for all, seeks to celebrate the efforts of individuals and institutions that strive for similar ends.

It is in that spirit that we are delighted to bestow the first Praful Bidwai Memorial Award upon the People’s Archive of Rural India (PARI).

Set up in 2014 by Palagummi Sainath, an award winning journalist internationally recognised for his reportage and commentary on agrarian distress, PARI seeks to be both a journal and archive, recording and documenting rural India in all its diversity. Bold in conceptualisation and innovative in methodology, it uses the tools of digital communication, the practice of data storage, and the principles of good journalism to capture the layered realities of a region that is home to over 800 million people speaking in an estimated 700 languages. The modes of life in this ecologically varied terrain, its arts, crafts and literature, its patterns of occupation and negotiation, its forms of transport and ways of knowledge building, are all themes that enliven the PARI website and make it a truly “living archive”.

We especially commend the fact that PARI makes no attempt at exoticising the subjects it covers. The approach is participatory and open-ended with the protagonists themselves often turning into documenters of their own lives. The lack of a tradition of archiving within progressive and academic circles in India has been conspicuous and that makes PARI’s effort to bridge this gap a pioneering one. While it acknowledges that rural India is marked by pre-capitalist exploitation and repressive practices, even as caste and patriarchy continue to hold sway, PARI attempts to capture the many social transformations and struggles that are also taking place. PARI’s interventions are also valuable because they come at a time when rural communities in India battle many adversities; when the logic of the neoliberal political and economic paradigm has resulted in an onslaught on common property resources, and when the focus of both decision makers and mainstream media is almost exclusively on the market economy and urban consumers. We recognise that by providing this invaluable, multi-media record of rural India’s visual, textual and oral heritage, PARI is contributing not just to keeping it alive and relevant for the future, but to help shape social action in the present.

As we honour PARI, we hope that it will continue to make its own road in the forgotten corners of India, emerging as a source of information and inspiration to people across the world.