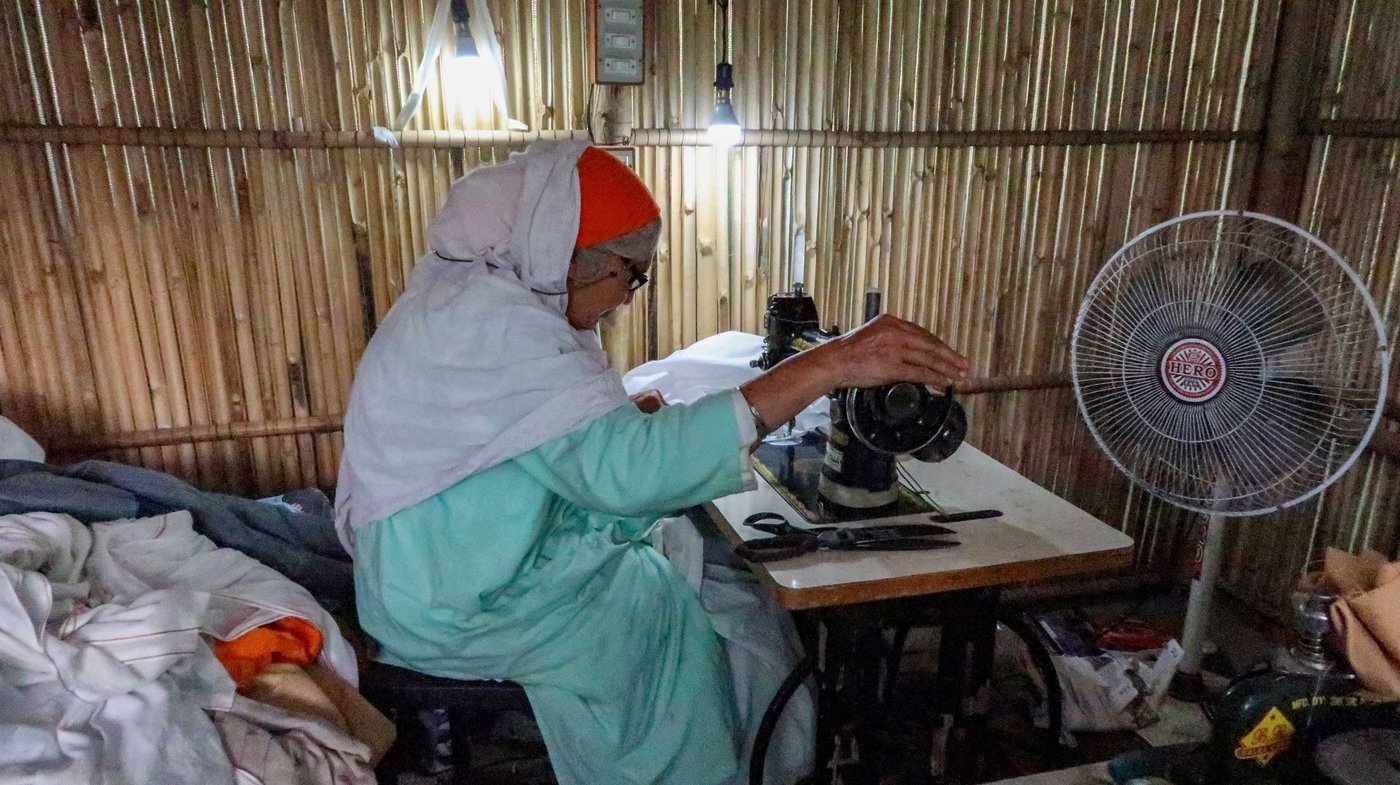 ‘No amount of sewa can satisfy the heart’

For months, they offered service at Singhu and Tikri to support the farm protests. Now, Mohini Kaur and Sakshi Pannu are rejoicing with the farmers returning home in triumph from Delhi’s borders

A narrow cot in the small bamboo shed held a pile of clothes that Mohini Kaur would need to alter or stitch. “I am not very good at tailoring, but I do what I can,” said the 61-year-old from Swaroop Nagar in New Delhi, who came to the Singhu protest site in November 2020. “I came here to do sewa for the protesting farmers. They grow food for us, this was something I could do for them,” she said. Mohini didn’t go back home, not even once – not until after the farmers unions withdrew their protests on December 9, 2021.

When news of her work as a volunteer at Singhu, on the Delhi-Haryana border, made it to the Punjabi newspaper Ajit , it inspired a reader from Punjab to help Mohini. In July this year, the young man, 22-year-old Harjeet Singh, joined Mohini at her worktable in the shed.

Harjeet owns a tailoring shop in Khanna, a city in Punjab’s Ludhiana district. His father is a farmer who grows rice, wheat and maize on their four-acre farm. “I left my shop in the care of my two karigars [artisan workers] and came to Singhu in July this year to help Mohini ji . There is so much work here; she cannot do it all alone.”

Besides the cot and worktable, two sewing machines and a pedestal fan filled up the space in the shed, leaving little room for movement. On the floor, a portable gas canister stove was used to boil milk. Only one person could step in at a time to talk to Mohini or Harjeet. The ‘customers’ – farmers and others at the protest site – stood in the doorway. 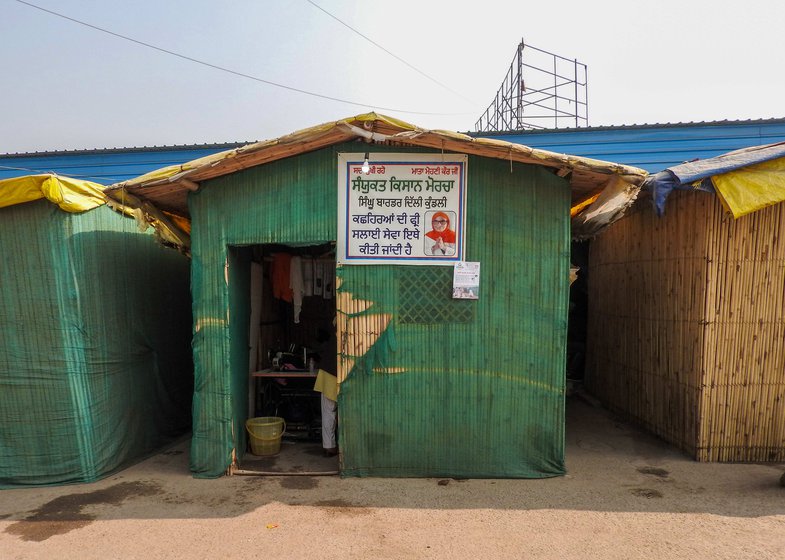 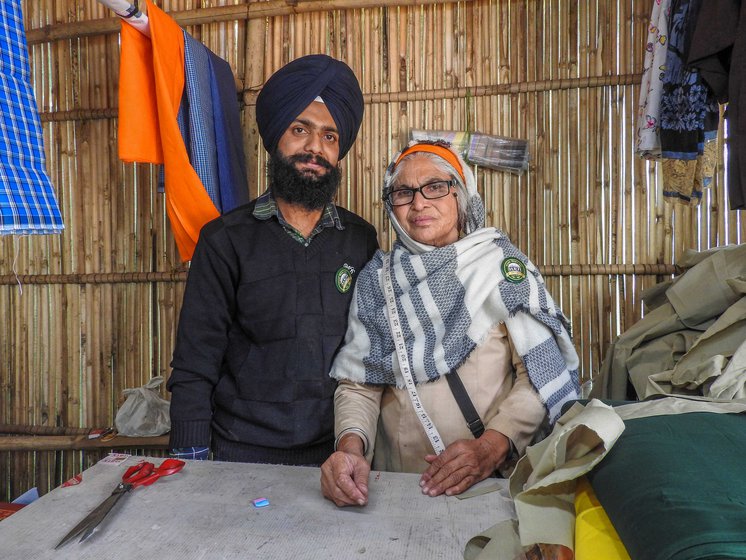 Left: The bamboo shed at Singhu, where Mohini Kaur set up her tailoring unit. Right: Harjeet Singh (left) and Mohini at their worktable

Fresh bundles of cloth were stacked at one end of the worktable. “It is pure cotton and the cost is the same as market rate. I don’t keep synthetics,” Mohini said to a man enquiring about a particular cloth. “It costs 100 rupees a metre.” She charged her customers the cost of materials but her labour was free. If people paid her something for the tailoring, she accepted it.

Mohini had trained as a nurse in Bengaluru in 1987. She worked as one for just a few years before giving up the job as a young mother. She lives on her own now – her husband died in 2011. Her married daughter resides in the Dwarka neighbourhood of South West Delhi district. Five years ago, Mohini lost her son, who was in his early 20s, to a severe chicken pox infection. “It has not been easy to deal with the grief of losing my son. So, I thought, I would help the farmers. It motivates me to keep working and I don’t feel so lonely. Harjeet calls her ‘Ma’. “I am her son now,” he said, a measuring tape garlanding his neck.

On November 26, the Singhu protest site's stage was reverberating with prayers, speeches, songs and applause from the farmers – both women and men – gathered there to commemorate the anniversary of the farmers’ protests. But Mohini and Harjeet were busy at their worktable – measuring, cutting and running the sewing machine. They would take breaks only for meals and to sleep at night – Mohini in the shed, Harjeet in his tractor-trolley some distance away.

Watch video: Big hearts and steady hands at the service of farmers

Mohini and Harjeet wanted to continue their tailoring service for as long as the farmers remained at the protest site – and they did. “ Sewa se kabhi dil nahi bharta (No amount of service can satisfy the heart),” said Mohini.

On December 9, 2021, the 378th day of the farmers protests, leaders of the Samyukta Kisan Morcha announced that the farmers would vacate the protest sites at Delhi’s borders. They had occupied the sites last year to protesting against the farm laws that were passed as ordinances on June 5, 2020, then introduced as farm bills in Parliament on September 14, and hastened into Acts on September 20, 2020.

As swiftly as they were passed, the laws were repealed in Parliament on November 29, 2021. They were: the Farmers (Empowerment and Protection) Agreement on Price Assurance and Farm Services Act, 2020 ; the Farmers’ Produce Trade and Commerce (Promotion and Facilitation) Act, 2020; and the Essential Commodities (Amendment) Act, 2020 .

The farmers' unions called off the agitation on December 9, 2021, after the union government accepted a majority of their demands. But they stated that negotiations for a legal guarantee of  the minimum support price (or MSP), would continue. 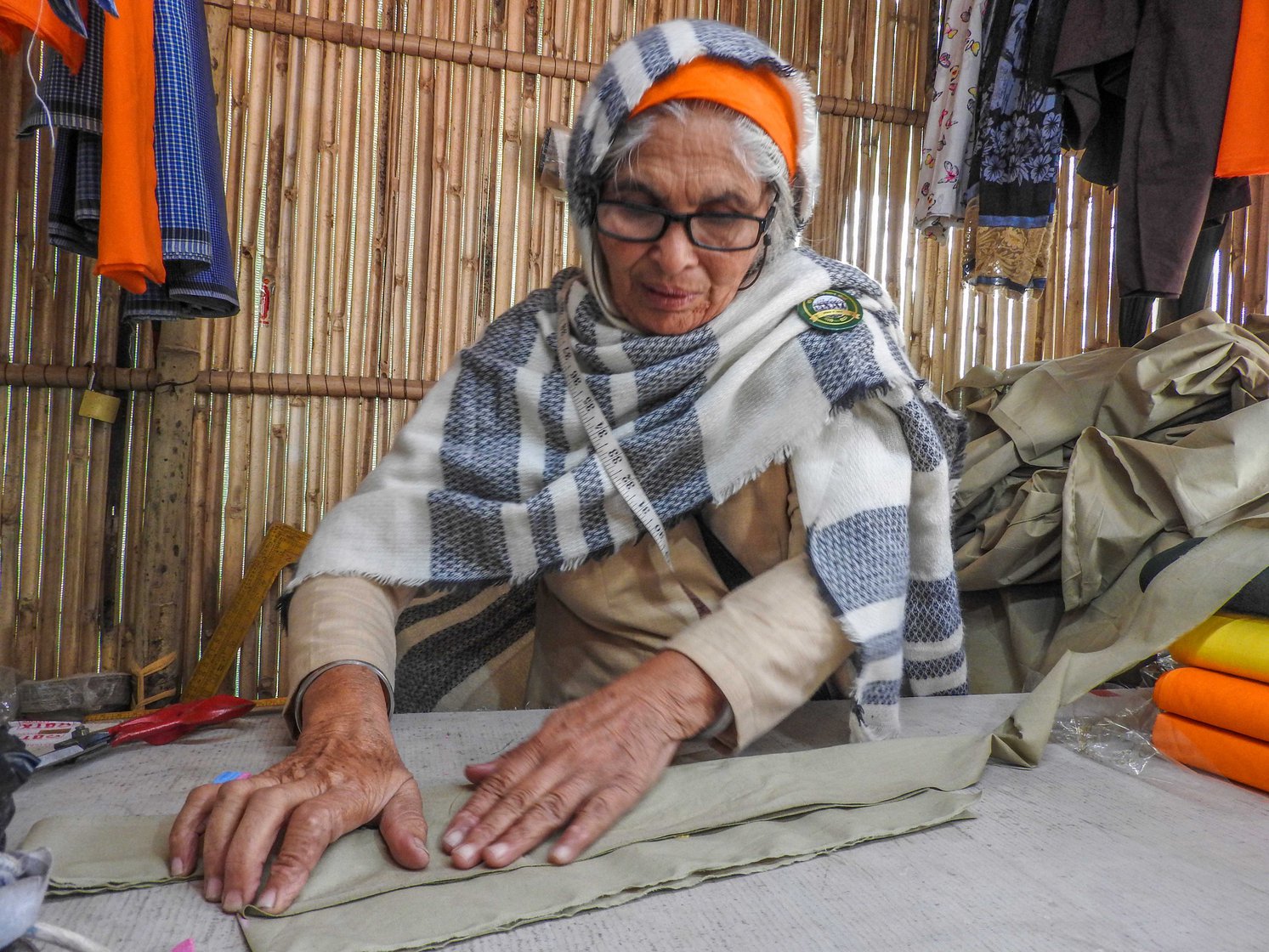 Mohini Kaur came to the Singhu protest site in November 2020 and volunteered to stitch and mend the protesting farmers' clothes. "They grow food for us, this was something I could do for them," she says

About 40 kilometres from Singhu, at the Tikri border site near West Delhi, Dr. Sakshi Pannu had been running a health clinic from 9 a.m. to 3 p.m. throughout the week. “I receive over 100 patients here on any given day. Most of them ask for medicines for cold and fever. Some have diabetes and high blood pressure. Living here, at the protest camp, many get an upset stomach,” she said.

When we met Sakshi in November, a steady stream of patients was coming to the clinic. She was telling a man to come for the cough medicine the next day because it was out of stock. Medicines and equipment for the clinic were provided by Uzma Baithak, a social service organisation in rural Haryana.

Sakshi said she would have liked to keep the clinic open for longer hours, but, “I need to spend some time at home with my 18-month-old son, Vastik. I must also take care of him.” When she was busy at the clinic – where she has been volunteering since April this year – her parents-in-law, who also supported the protests, would take their grandson with them and attend the prayers and meetings at the site, just a few feet away from the clinic.

Her grandfather was a farmer in Jammu and her in-laws are originally from Jhamola village in Haryana’s Jind district. “We are still very connected with our rural roots and fully support the farmers in their demands and their protest against the farm laws,” said Sakshi. 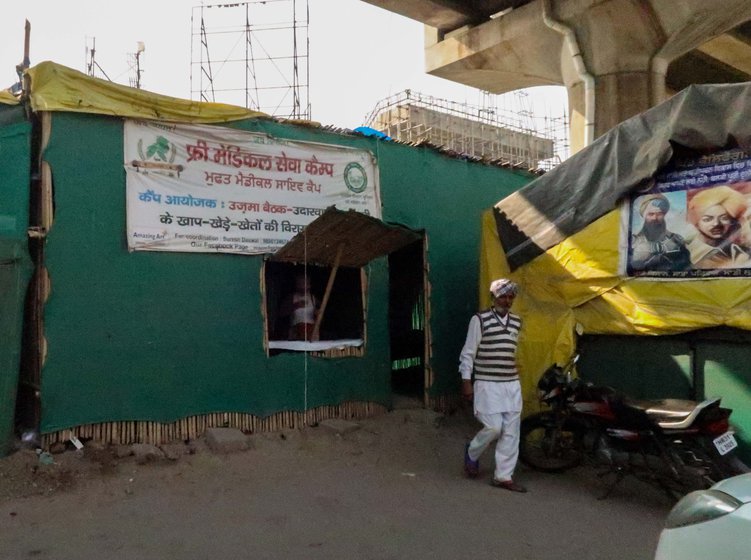 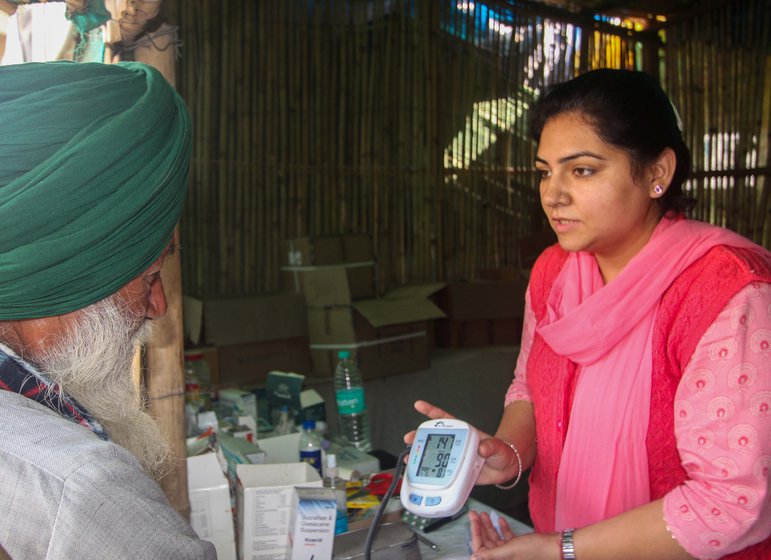 The free health clinic (left) that was set up for  farmers camping at the Tikri border site. Dr. Sakshi Pannu (in the pink dress) ran it every day since April

From the Tikri protest site, Sakshi’s home – where she lives with Vastik, her husband Amit, and his parents – is about five kilometres away, in Haryana’s Bahadurgarh town. After completing her MBBS degree from New Delhi’s Lady Hardinge Medical College in 2018, Sakshi had worked in the college’s hospital for a year. On a break now, she hopes to study for a postgraduate degree in general medicine after her son grows up a little.

“I always wanted to do something for the common people,” Sakshi said. “So when the farmers gathered here, at Tikri border, I decided to come to this clinic and offer sewa as a doctor. I will continue doing this for as long as the farmers are at this protest site.”

Watching the farmers pack up to go back home, Mohini says jubilantly,  “Fateh ho gayi (We have triumphed).” Emotional and happy, Sakshi says, “A year’s hard work [of the farmers] has borne fruit.” Her spirit of service as strong as ever, she adds, “I will be here right till the end, until the last farmer returns home.”

The author would like to thank Amir Malik for his assistance in reporting this story.