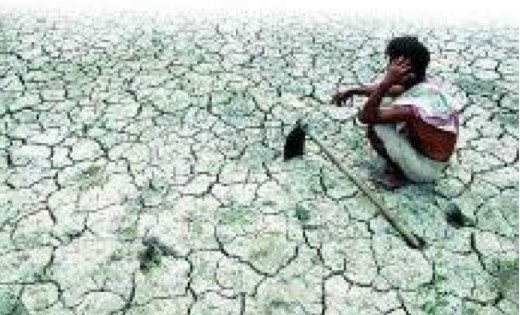 The government of Maharashtra seems to think insurance can mitigate farm suicides? In the present context, it will mean higher premiums (which will be paid for by government with public money). And no insurance company anywhere pays out on a suicide, so the premiums will be forfeited.

MUMBAI: A series of reports in The Times of India on the drought in Maharashtra and the rise in farmer suicides triggered a strong response from the opposition, which raised the issue in both the state assembly and council.

Responding to the opposition's demands for more immediate action in the state's drought-hit areas, state agriculture minister Eknath Khadse said the state was thinking of providing a life insurance scheme worth Rs 5 lakh for small farmers, with the state paying the instalments. "We are also planning to set up village-level committees to boost the morale of farmers and prevent suicides," Khadse told the council.

Waving copies of this newspaper in the assembly, senior Nationalist Congress Party leader Jayant Patil demanded action from the government. "Farmers suicides in the state are rising during the drought, but the state government has not even mentioned a line about this in the budget speech," Patil said.

On March 22, TOI had reported that farmers' suicides in the state had risen by 40% during the last seven months when the impact of the drought and unseasonal rains compounded the farm crisis.

Leader of opposition in the assembly Radhakrishna Vikhe Patil also referred to TOI's reports. "The rise in suicides shows the government is not being sensitive to farmers. This government discussed suicides in its 'chai per charcha,' but what happened after that?" he asked.

In the Upper House, leader of opposition Dhananjay Munde raised the issue. He hails from Marathwada, which was the focus of TOIs's reports. "The report says the sharpest rise has been in Marathwada. Will the state announce a special package for Marathwada and Vidarbha?" he asked.

In its budget, the state government has already announced Rs 1,000 crore for the Jalyukta Shivar Abhiyan for water conservation schemes in drought-prone areas. It has announced Rs 171 crore to provide debt relief from money-lenders. The government has also disbursed relief worth Rs 4000 crore to drought-affected farmers. It has also said another package will be declared for those impacted by unseasonal rains by the end of the assembly session.

Khadse told the council that 17,526 farmers in the state had committed suicide in the last 14 years, of which 8,023 were eligible for compensation. "As of now, we cannot waive their loans but this will be discussed in the cabinet meeting," he said.

Report 9: The original version of this story appeared in The Times of India on 25 Mar 2015