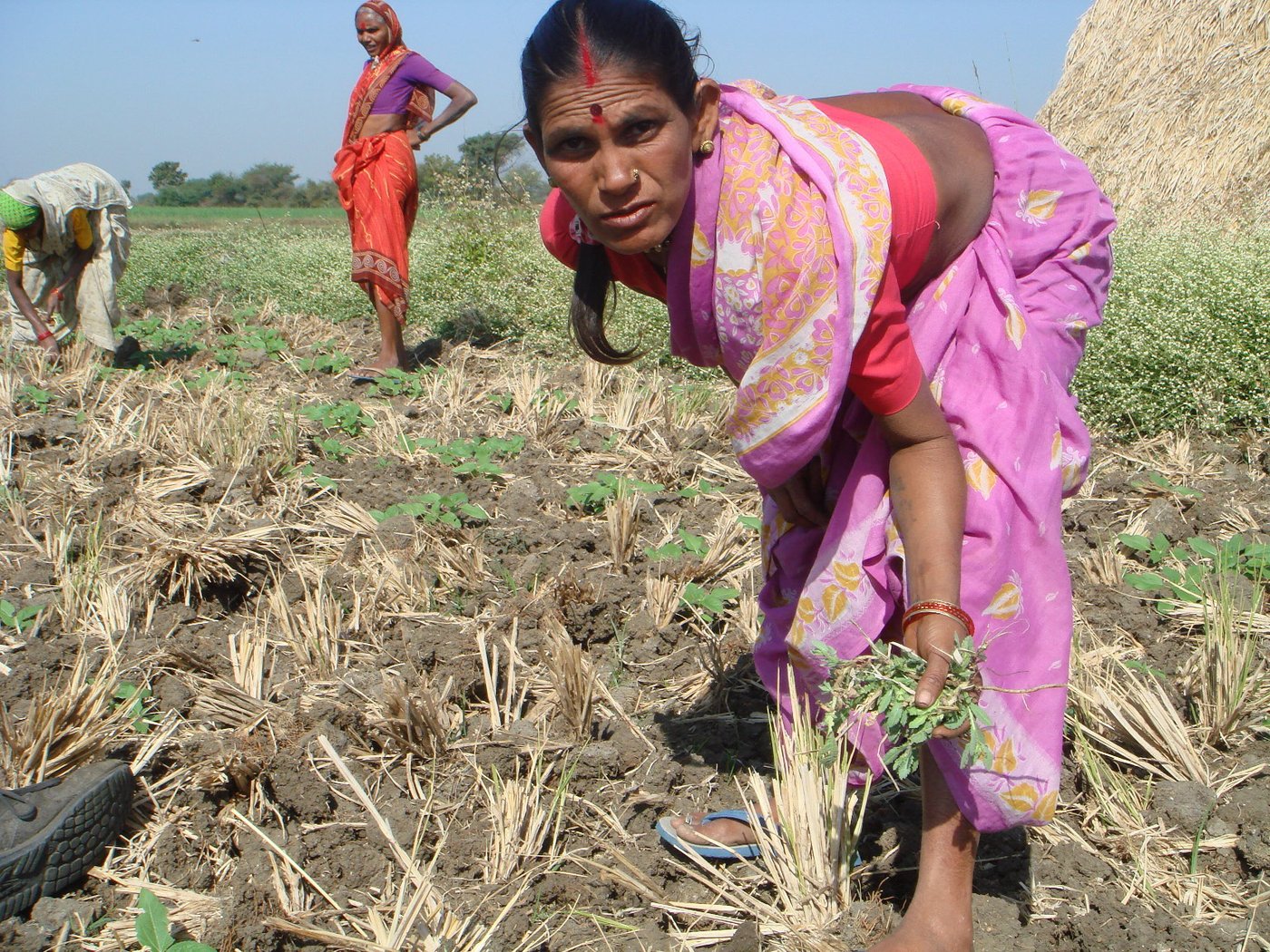 At least ten farmers have killed themselves every day, on average, for a straight ten years in the rich state of Maharashtra. Nation-wide the farm suicides total nears the 300,000-mark, as the data of the National Crime Records Bureau show.

At least 3,146 farmers committed suicide in Maharashtra in 2013, the latest data of the National Crime Records Bureau (NCRB) show. That brings the total number of farmers taking their own lives in the Western Indian state to 60,750 since 1995. Maharashtra’s record finds no mention in the media. The picture in the state got a lot worse after 2004. On average, 3,685 farmers in the state took their lives every year between 2004-13.

This means Maharashtra, barely three months away from assembly elections, is witnessing, on average, over ten farmers’ suicides every single day these past ten years in a row . That’s a lot worse than its already awful average of seven such deaths a day between 1995-2003. A rise of 42 per cent in fact. (The NCRB began recording farm data in its annual Accidental Deaths & Suicides in India reports in 1995.) 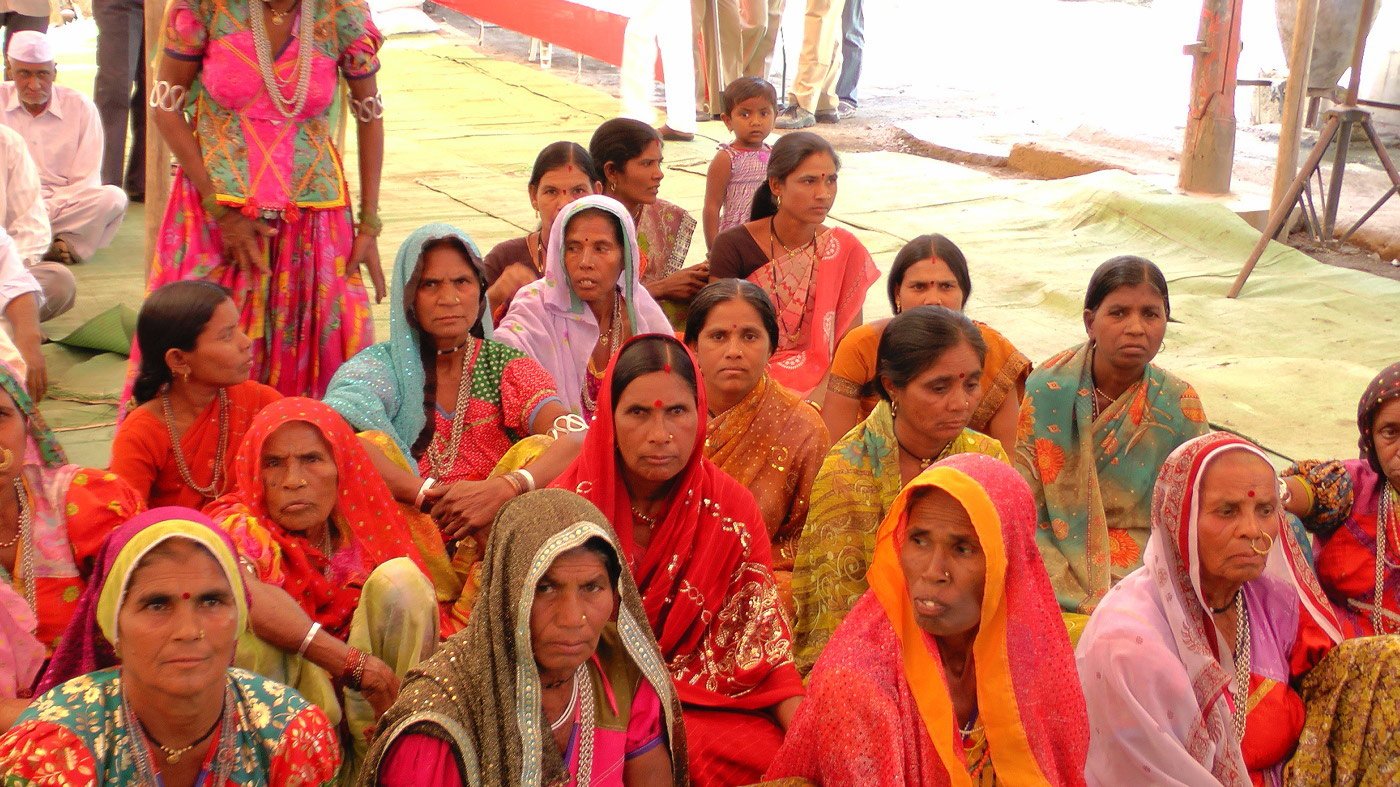 PHOTO • P. Sainath
Women farmers of Bhamraja village in Yavatmal district, Maharashtra, gather for a meeting in their village with visiting members of the Parliamentary Standing Committee on Agriculture. Committee members found the village to be the opposite of the 'model' it had been painted as in media coverage paid for by large seed corporations.

Meanwhile, Maharashtra’s 3,146 figure reflects a decline of 640 farm suicides as compared to the 2012. In fact all the Big 5 states in farm suicides have recorded declines in 2013 relative to the previous year. Andhra Pradesh claims a fall of 558, Chhattisgarh 4, Madhya Pradesh 82 and Karnataka 472.

A very welcome decline - until you look at the numbers more closely. With a total of 7,653, the Big 5 still account for a full two-thirds of all farmers’ suicides in the country. No changes in the pattern there. And 15 other states recorded mostly mild increases. Of those, only Haryana records a significant increase of 98.

This great ‘fall’ also perpetuates a growing trend of states with otherwise high farm suicide numbers declaring ‘zero’ or near zero suicides year after year. Chhattisgarh has done this three years in a row now since 2011: it has announced 0, 4 and 0 farmer suicides. West Bengal also records zero in both 2012 and 2013. What if we take a three-year average for these states before they started their zero-sum games? For Chhattisgarh that average was 1,567. For West Bengal 951. That’s a total of 2,518. Add that to the 2013 total and it goes up 14,262. That’s even higher than the 2012 figure (when too, the same fudging was on).

This is not to say that states cannot or have not seen any decline at all. (Also, one-off annual rises or falls are quite normal). Just that the nature of that decline as recorded in the past three years is highly suspect. So Chhattisgarh, a state that saw \over 14,000 farm- suicides from 2001-10, suddenly has none at all in the next three years. A model worth emulating? Other states surely think so. They’re getting in on the fraud, too.

“Clearly, the massaging of the data continues”, says Prof. K. Nagaraj. an economist at the Asian College of Journalism, Chennai. Prof. Nagaraj’s 2008 study on farm suicides in India remains the most important one on the subject.. “When you want to play down very bad numbers in one column, you can’t just erase them. You have to fit them into some other, catch-all category. Shoving unwanted numbers into “Others” is the common route to data massaging.”

And that’s exactly the trend in the data the states have been submitting to the NCRB. This year, too.

Here’s another thing that gives away the heavy massaging the data have been subject to at the state level.

On the same page as the NCRB table which records the “Self-employed (farming / agriculture)” is another column: “Self-employed (Others).” ( http://ncrb.gov.in/adsi2013/table-2.11.pdf ).

Puducherry shows a similar trend. West Bengal solved that problem by simply not filing any data at all in 2012. So clearly, even if you can’t shove the numbers under the carpet, you can dump some of them in “Others.”

Those prematurely celebrating a decline miss another point. There were 7.7 million fewer farmers in 2011 than there were in 2011, as the Census data show us. Millions were and are either quitting the profession or losing full farmer status. In that period, the country, on average, saw 2,000 fewer farmers each day. So there were surely even fewer farmers in 2013. What do get if we view the suicide numbers against this shrinking farmer base?

As Prof. Nagaraj and researchers at the M.S. Swaminathan Research Foundation (MSSRF) calculated last year from NCRB and Census data across a decade: “the adjusted farmers’ suicide rate for 2011 is in fact slightly higher than it was in 2001.” ( http://psainath.org/farmers-suicide-rates-soar-above-the-rest/ ) And that’s after heavy data fudging at the State level.

As their calculations showed: Suicide rates among Indian farmers were a chilling 47 per cent higher than they were for the rest of the population in 2011. In some of the States worst hit by the agrarian crisis, they were well over 100 per cent higher. In Maharashtra, farmers were killing themselves at a rate that was 162 per cent higher than that for any other Indians excluding farmers. A a farmer in this State is two-and-a-half times more likely to commit suicide than anyone else in the country, other than farmers.

Are the suicides occurring because of drought and crop failure?

Farmers have been killing themselves in years when the crop has been excellent. And in seasons when it has failed. They have taken their own lives in large numbers in very different years. When it rains they lose out, when it doesn’t, they lose out worse. There have been awful suicide numbers in some good monsoon years. And so too, in years of drought, which can make things more terrible.

The monsoon does have a very real impact on agriculture. But it is by no means the main reason for the farm suicides. And with the bulk of those suicides occurring amongst cash crop farmers, the issues of debt, hyper-commercialization, exploding input costs, water-use patterns, and severe price shocks and price volatility, come much more to the fore. All factors majorly driven by state policies.

Against the background of these factors, you can be sure that if a drought really unfolds this year, they’re in very big trouble. And we will know very shortly. July is the main month of the monsoon. It normally accounts for over 50 per cent of the rains, thus equalling the importance of the other three months of June, August and September combined. Given the situation that seems to be building, I’d go slow on the celebrations.

Over 2,000 fewer farmers every day: http://psainath.org/over-2000-fewer-farmers-every-day/

This story originally appeared in: http://psainath.org/maharashtra-crosses-60000-farm-suicides/#prettyPhoto

A shorter version of this post appeared on the BBC here: http://www.bbc.co.uk/news/world-asia-india-28205741