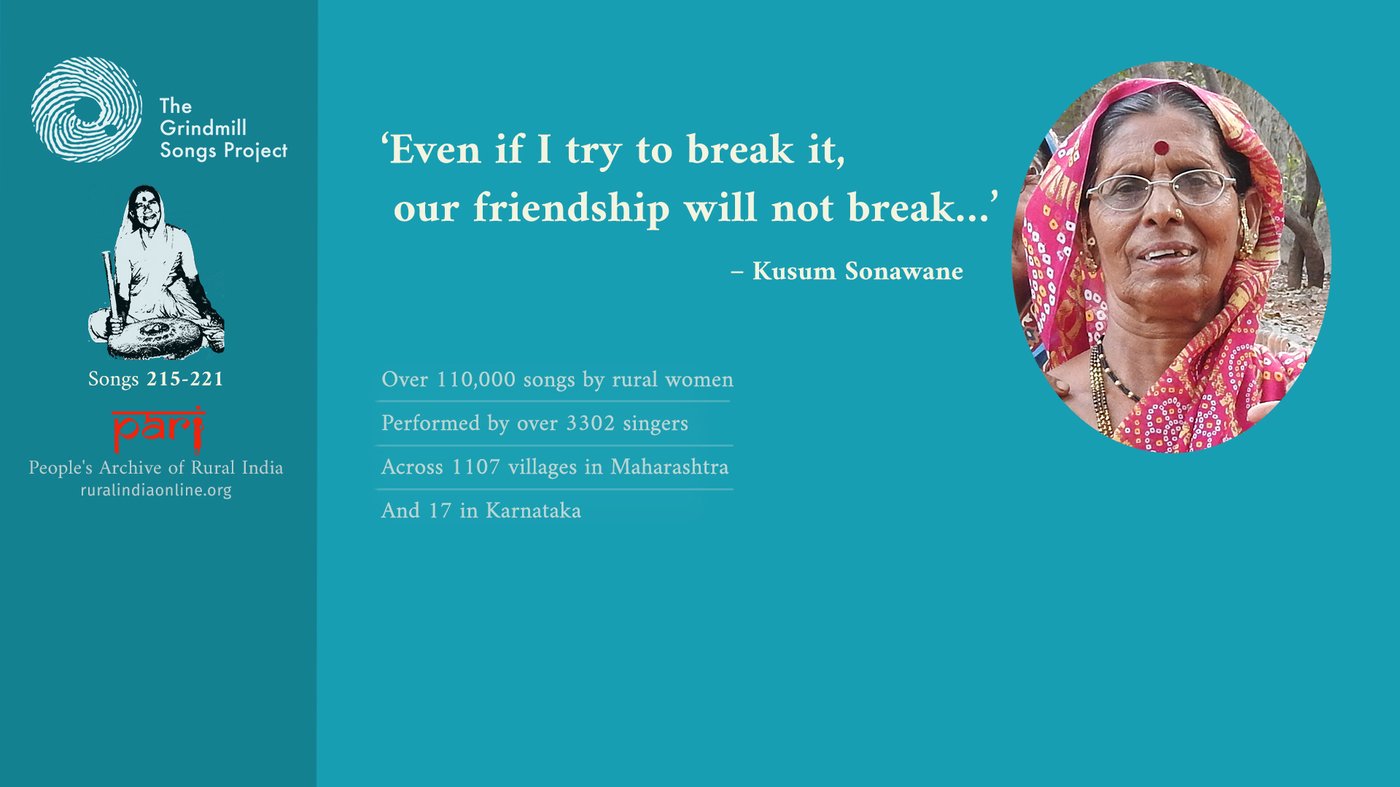 “Let the world say what it will…”

The Grindmill Songs Project presents seven ovi by Kusum Sonawane and Shahu Kamble of Nandgaon village, which speak of the strong but sometimes fragile friendship among women

You and I, our friendship will not break
It is like a knot in a silk thread that cannot be untied

They were sisters-in-law, but their friendship was stronger than any bond forged by marriage could be.

“Our songs were very popular. People from other villages in Mulshi would invite us to sing Ambedkar ovi for his birth anniversary celebrations.” That’s Kusumbai Sonawane, 70, speaking about her friendship with sister grindmill singer Shahubai Kamble. The two would work together pounding grain with a pestle in a wooden container to remove the husk and, while at it, they would think up new tunes for grindmill songs. During the routine chore of making jowar or rice flour on the stone grindmill, they would sing and practise ovi set to these new tunes. That’s what we learned while visiting Kusumbai at her home in Nandgaon village in Pune district’s Mulshi taluka in September 2017.

During  the late 1980s, when a team led by Guy Poitevin and Hema Rairkar visited villages across Maharashtra, singers like Kusumbai and Shahubai contributed ovi to the grindmill songs database. Some of these women also became members and activists of the Garib Dongri Sanghatana (GDS) – an organisation of the poor from hilly areas in Pune district. Guy Baba and Hematai, as members of this organisation still affectionately call them – both are no more – helped bring awareness through different GDS activities, including adult literacy classes.

On March 25, 2017, Hema Rairkar’s death anniversary, some GDS members had gathered at her bungalow in Pune to commemorate both their leaders. Among them were Mathabai Bhalesain and Bababai Laygude from Maval taluka , and Kusumbai Sonawane and Lilabai Kamble from Mulshi taluka. These four women, who are friends and co-workers say, “We are not formally educated but our experience [in the GDS] gives us the confidence to raise issues that affect us in the gram sabha [village meetings].” Often these are about the scarcity of water and the need for tankers.

They’re quite amused when we try to get them to smile on camera. 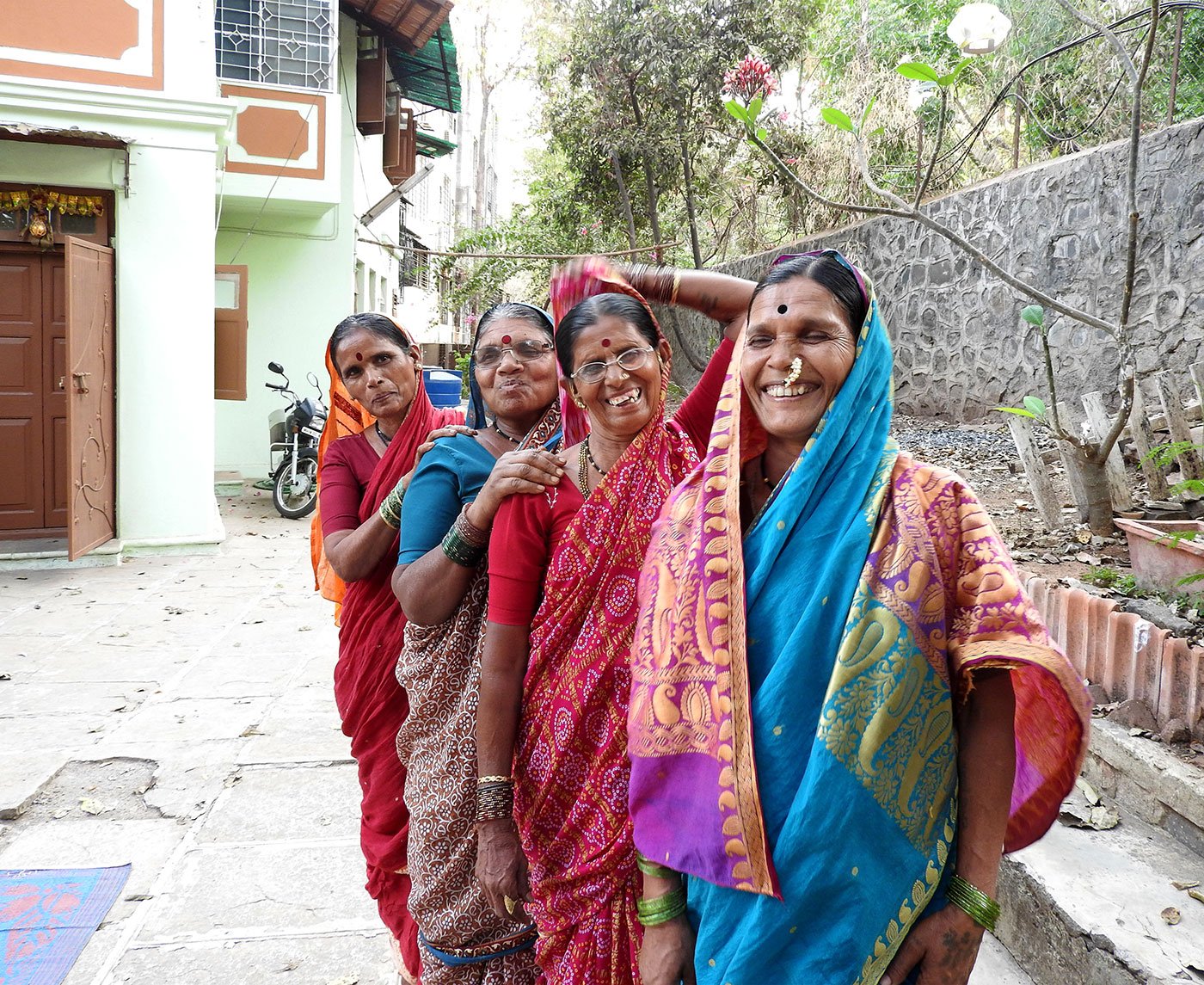 PARI celebrates International Women’s Day, March 8, for up to a month after that date. And so this edition of the Grindmill Songs Project carries seven ovi about friendship among women. Shahubai and Kusumbai sing the first five together. The last two couplets are sung only by Shahubai. She even names her friend Kusumbai in one of these.

The Marathi term used for friendship in these songs is bhaupana , which literally means brotherhood or fraternity. The mixing of salt and caraway or fennel seeds is a metaphor for a misunderstanding between two friends, probably created by someone telling untrue tales about one to the other.

You and I, we are close friends, sing the two women. But, they ask, who mixed in the pungent caraway seeds? One friend says to the other, “Let me convince you to give up your silence and let us go back to the village.” In the next ovi, they sing, “Who mixed salt into our friendship?” One friend pleads with the other, “Taru, my friend, don’t be silent, speak to me.”

“What can I give our friendship, let us share a clove, Savitrabai, and eat it together,” says one singer indicating that nothing is too small to share between friends. And even if she tries, their friendship will not break, because it is like the tight knot of a silken thread that cannot easily be untied.

Further, someone has mixed in fennel seeds and just like the sharp bits of the herb can sometimes poke while being eaten, this mixing of fennel has created a rift. The silence between them has made one friend restless, and she walks to and fro.

In the last two ovi Shahubai says let our bond go on and be everlasting, “I tell my friend Kusumbai, let the world say what it will.” She tells her to visit her once at home as if to cement their friendship forever.

Listen to these songs of bonding:

You and I, ours is a close friendship, but who mixed in the caraway seeds?
How shall I convince you woman, give up your silence, let’s go to our village

You and I, and our friendship, who mixed salt in it?
Taru, my friend, I tell you, don’t be silent, speak to me

You and I, we are close friends, what can I give our friendship?
I tell you, Savitrabai, let us share a clove between us and eat it

Even if I try to break it, our friendship will not break
It is like a knot in a silk thread that cannot be untied

You and I, we are close friends, but who mixed in the fennel seeds?
Now my friend, restless in silence, walks to and fro

Our close friendship, let it keep on going as it does
I tell my friend Kusumbai, let the world say what it will

You and I, and our close friendship, let me remind you of it
I tell you my friend, visit me once, come to my house

Note: The mixing of caraway seeds, salt or fennel seeds is a metaphor for someone creating a misunderstanding between two friends, probably by telling untrue tales about one to the other. 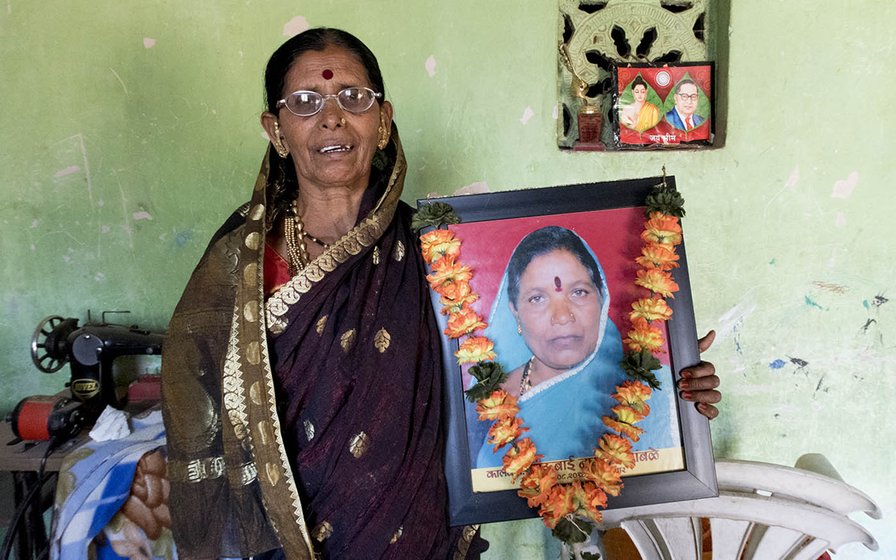 Kusum Sonawane with a photograph of Shahu Kamble, her sister-in-law and friend