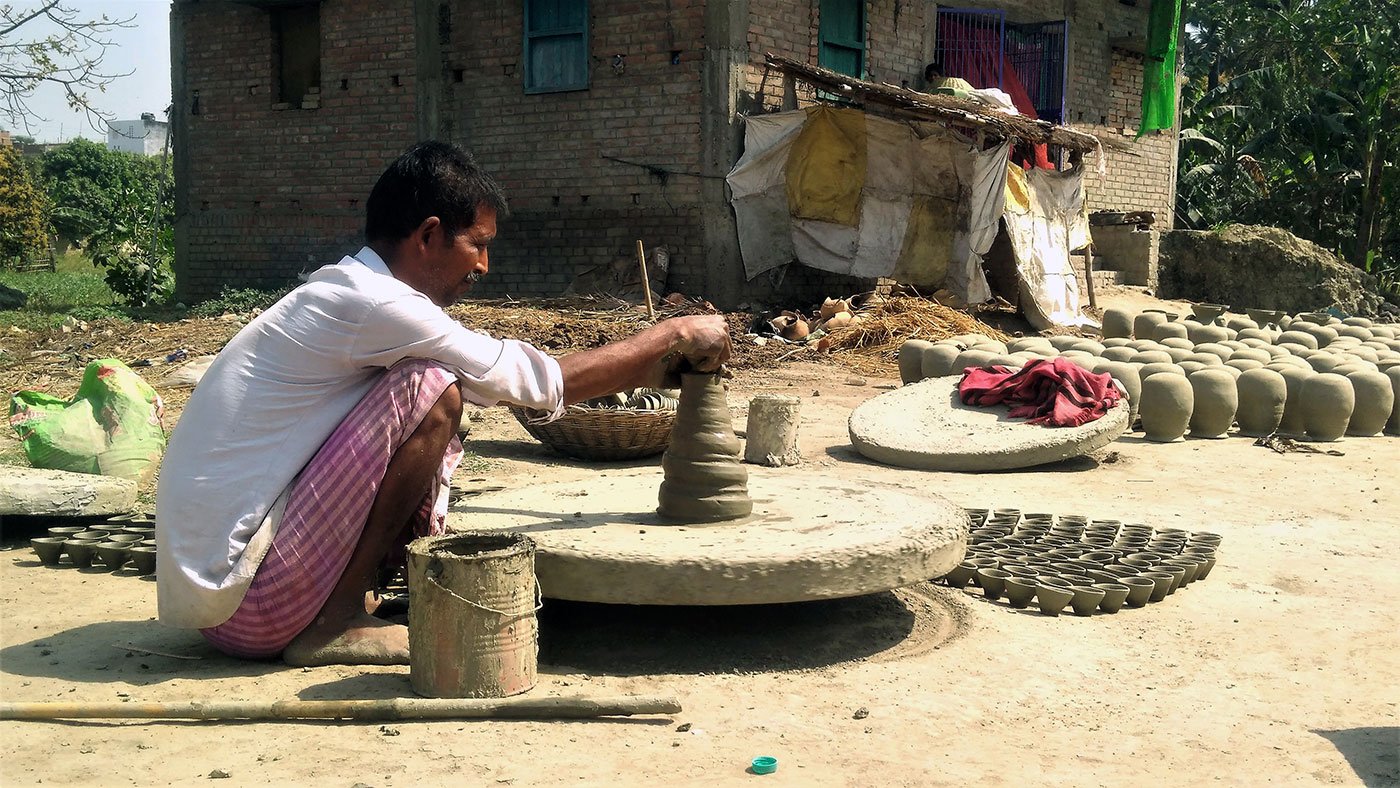 Firing the last of the pots in Rasulpur Sohawan

In Bihar's Vaishali district, Sudama Kumbhar is still firing the oven though many potters in his village have moved to other work, defeated by rising costs and cheaper alternatives to their hand-made clay items

“Pottery is not just about rolling the chaak [wheel]; you have to pamper what you’re making,” says Sudama Pandit, a potter from a hamlet of Rasulpur Sohawan village in Bihar’s Vaishali district. “It’s how you would nurture a child… First, you carefully mould the clay, give it a shape and then let it face the heat in the oven to come out strong.”

Sudama, now 54, learned the art of working with clay when he was 15. “My grandfather was a very talented artisan, but my father was not interested in making clay objects. So my grandfather introduced me to the skill, and villagers call me its ‘real’ inheritor – or Sudama Kumbhar [potter],” he says with pride.

Sudama’s day starts early, with the birds chirping. His wife Sunita Devi sweeps the work space in front of their house and removes the previous day’s dried bits of clay from the wheel and other tools, while he gets the clay ready. “It’s better to start early – what I make should get enough time to dry,” he says.

The clay Sudama uses is bought from Turki village, around 25 kilometres away in Kurhani block of neighbouring Muzaffarpur district. “In my grandfather’s time we would dig up to 30 feet, not far from our house, to get good quality clay," Sudama says. In the past, he explains, since pottery was a family business, there were many hands to share the tasks. Now he cannot afford to spend a day digging. Besides, he says, digging is strenuous, and buying clay has become the easier option: "Now there are machines to dig into the earth and we have to pay for clay. But it has many stones and removing them takes a lot of time.” 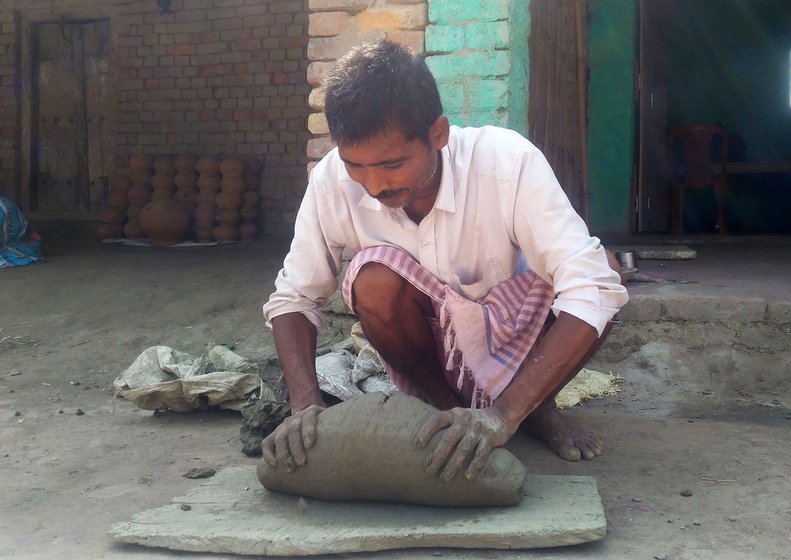 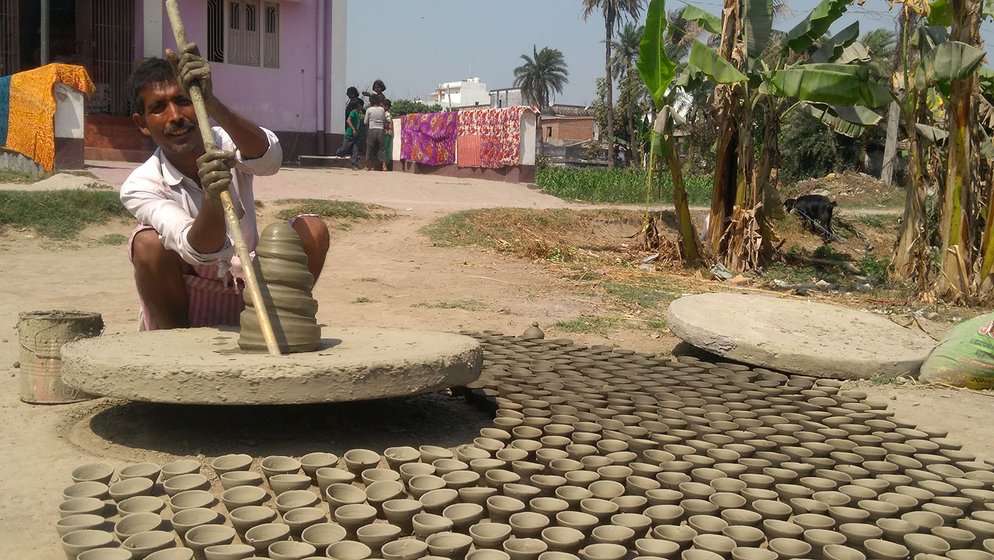 Sudama kneads the clay (left) in the work space outside his home; he then puts it on a wheel, spins it, and quickly and skilfully shapes various objects

As he says this, Sudama puts a 10-kilo lump of clay on his chaak and spins it, quickly giving the clay form. “It’s all about the hand that shapes the formless clay,” he says. His community's language is Bajjika, but we are talking in Hindi. The wheel rotates on a small stone, tapered like a top, and spins for about 10 minutes at a time.

And from it emerge all kinds of objects– a kulhad (for tea), a  container for sweets, diya s (lamps), a gabni to hold the  local brew, a kuliya-chukiya (toy kitchen set), ritual wedding objects and idols of deities.

I grew up in Bhagwanpur village, the block headquarters, around two kilometres from Rasulpur Sohawan, playing with kuliya-chukiya sets made by Sudama. Traditionally, each potter had a share of households where they supplied all the earthen items required by the family. They would also paint the house when necessary. Sudama's family supplied all the earthen articles to our house.

Once Sudama gives the wet clay a shape and a pot is ready, he dries it in the sun. When it is dry, he works on it again, gently beating the bottom with a rounded thokan and the inside with a semi-conical pitan, to refine its form. “The real test is when the sun-dried clay objects are fired,”  he says. For this, palm wood or mango wood packed with a layer of wet mud is used as an oven, with cowdung as fuel. In this crucial filtering stage, only good quality objects survive. 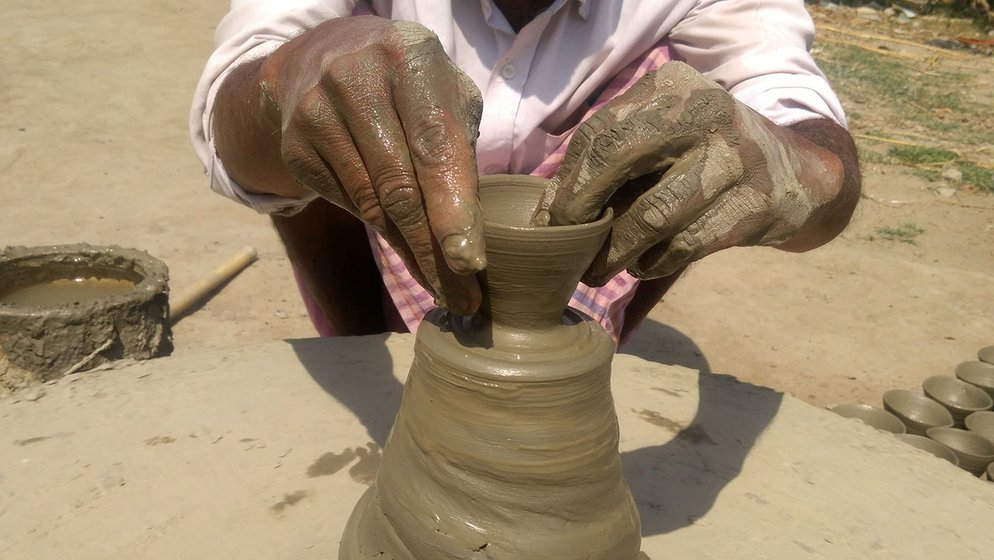 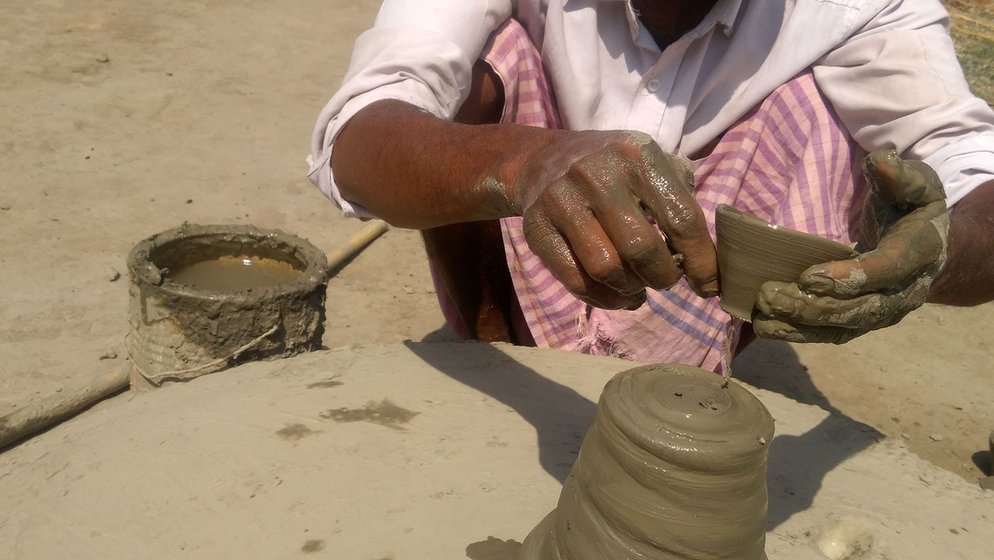 From Sudama's wheel emerge various hand-crafted items – a kulhad (for tea, above), diya s, toy kitchen sets and idols of deities, among others

Meanwhile, Sunita Devi, who has been out gathering dry leaves and branches from the fields, returns home. She’s an integral part of the pot-making process but she doesn’t see it that way. “What will society say if I start making pots?” she asks. “I have household chores, but I support him whenever needed. I make the goitha [dung cakes], collect the jalawan [twigs and branches] needed for drying the clay objects. But it is never enough – twice a week we have to buy firewood worth 1,000-1,200 rupees.”

Sunita supervises the firing process and ensures the pots get enough sunlight. “On the day we fire the objects, even a one-minute delay can make them impossible to sell,” she says.  She also decorates the items with paints bought from the local market. “There are many small tasks – I never sit down, I am always doing this or that.”

Sudama and Sunita earn an irregular income from the wheel. “I sell items worth around 10,000 rupees locally every month – of this around 4,000 rupees is profit. But the trade gets affected during the monsoon and in the very cold months of December-January, when the sunlight is not strong enough to dry the clay items,” Sudama says. During festivals and the wedding seasons – from mid-January to mid-February and mid-May to mid-June – the couple earns an additional Rs. 3,000-4000 a month. At times, Sudama gets bulk orders for pots and this too adds a bit to their income. 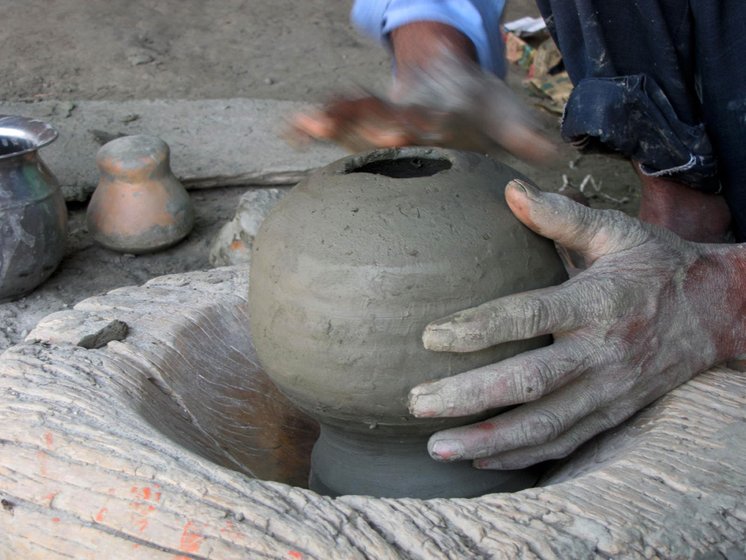 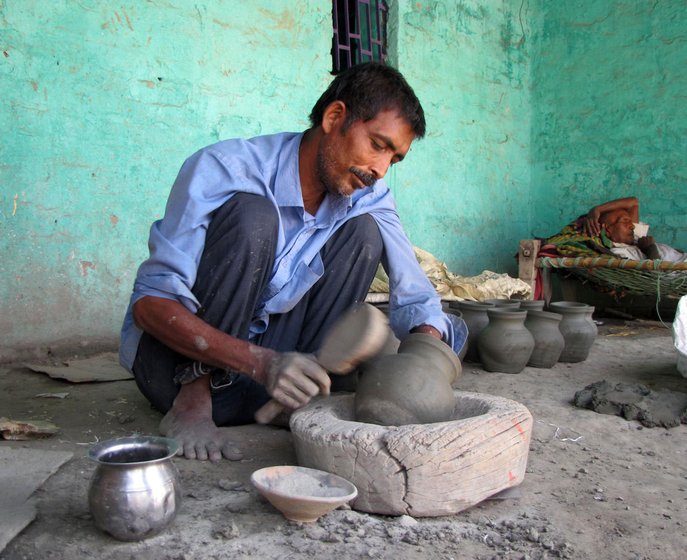 After giving the wet clay a shape, Sudama dries it in the sun. When the object is dry, he gently beats it with a rounded thokan (right) to refine its form

The unsteady earnings dissuaded two of Sudama’s younger brothers, Mallu and Gabbad, from taking up this occupation, so they work as masons. A fourth brother, Krishna, also younger than Sudama, who joins our conversation, works as a potter part-time but prefers daily wage work. “I cannot afford the ups and downs of this trade; the income is not enough. My brother is more skilled and has maintained a network of customers, so he can manage to survive in this trade,” he says.

Sudama and Sunita’s sons too will probably take up other professions. Their two daughters are married. Their older son Santosh, 26, is studying in Delhi to give competitive exams for a bank job, while younger son Sunil, 24, runs a maths coaching class in Bhagwanpur, where he studying for a BSc degree.

“After me, there is no one to carry on this legacy,” Sudama says. Because of this, he does not want to buy a  motorised wheel, which will be faster. Other than the cost (he is not sure how much), since no one else in his family will do this work, the investment, he says, will be wasted. 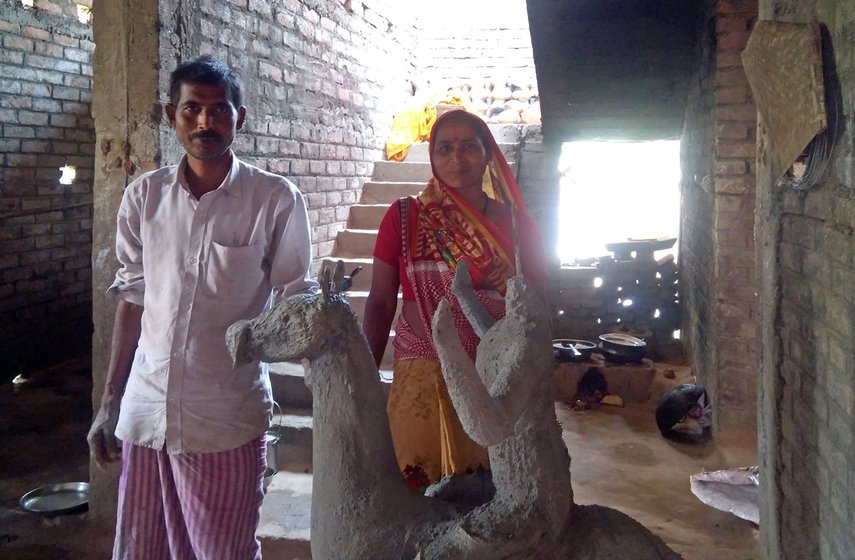 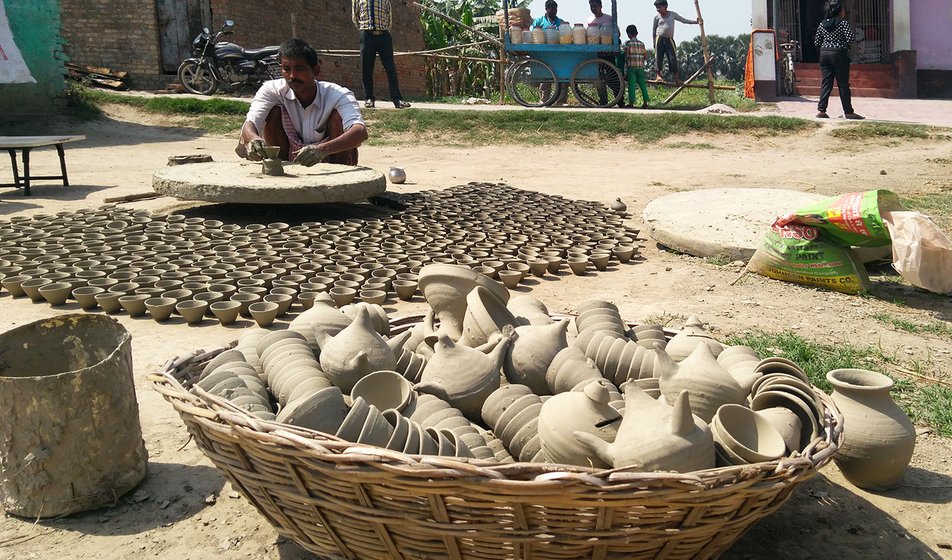 Sudama and his wife Sunita (left) mostly work with clay, but they have started making cement sculptures too – he sculpts, while she waters the object

Besides, the trade itself is in decline. “Because of the growing use of aluminium, plastic and steel products the tradition of using earthen objects is coming to an end,” he says. “They are now confined to rituals and used for delicacies only [and not in everyday cooking].”

This has forced many Kumbhars in Sudama’s hamlet to give up this occupation. “Some 15 years ago, it became common to use asbestos for roofing. In the past, making khapda [roof tiles] was a profitable source of income for us,” Sudama says. “There were around 120 artisan households in Kumbhar tola , but the number has come down to eight.”

While this saddens Sudama, it doesn’t dampen his spirit. He is pragmatic and has tried to learn new skills. In 2014, he visited Chunar town near Mirzapur in Uttar Pradesh, known for its skilled artisans working with plaster of paris and cement. Here, he learnt how to make sculptures of these materials, which now suffuse the markets and can be mass produced by machines that can churn out more intricate designs. Back home, Sudama too has started to work with cement, making sculptures that he tries to get a good price for.

His and Sunita’s own home routines too have changed. "We too don’t use earthen vessels for cooking, we cook in aluminium utensils,” he says. “We cannot compete with low-cost bulk manufactured items. With these uncertainties, I didn't want my children to become potters. The city has a lot more to give."

Shubha Srishti is a student in the MPhil-PhD programme at the School of Social Work, Tata Institute of Social Sciences, Mumbai.

Other stories by Shubha Srishti