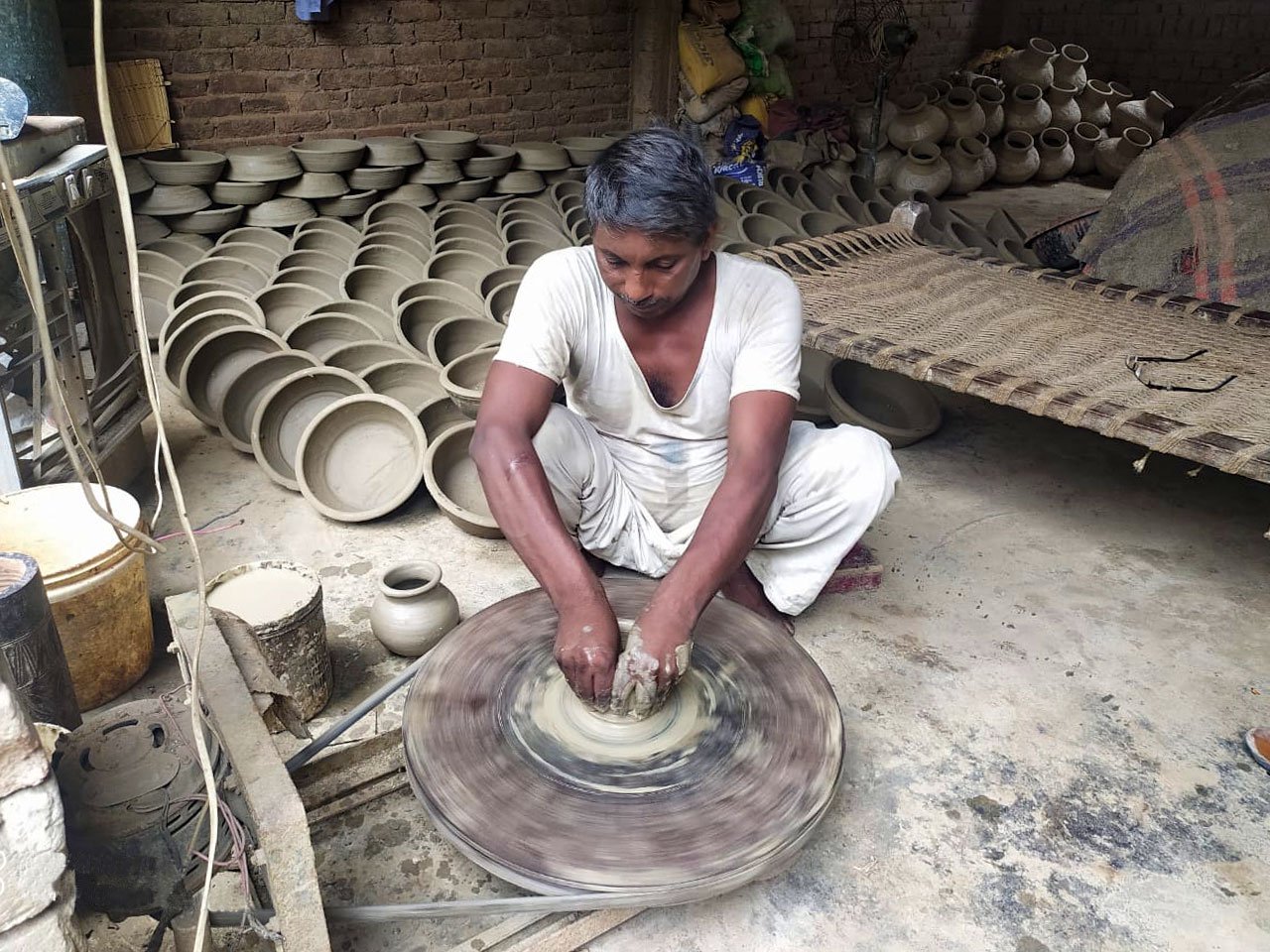 A melting pot of lockdown losses

The Ganpati festival starting this week, then Durga Puja and Diwali, were peak seasons for potters in Delhi's Uttam Nagar. Now, they are looking at a period of poor sales, as are potters in Kachchh and West Bengal

“Our work was already suffering,” says Jagmohan, a potter in the Uttam Nagar locality of West Delhi, referring to the orders passed around a year ago by the state authorities to dismantle pottery furnaces that run on wood and sawdust. “Due to this, some potters have been making products in small numbers, some have become just vendors and others have left this work. And now this pandemic and lockdown have hit us at a peak of our sales season [March to July].”

Jagmohan (in the cover photo on top; he uses only his first name) is 48, and has been a potter for over three decades. “The good thing was, we realised there was [greater] demand for matkas this year because people have been avoiding drinking cold water from the fridge [due to anxieties about Covid-19]. But since we ran short of clay during the lockdown, we could not keep enough stock ready.” Usually, a potter here can make around 150-200 matkas in 2-3 days with the help of family members.

Along the streets of the colony are heaps of dry clay – and, in busier times, the sounds of potters’ wheels and tapping of pots from behind doors, with hundreds of handmade pots, lamps, idols and other items drying in courtyards and worksheds. These are then moved on for a coat of geru paint (the liquid red clay that gives the natural tone to terracotta items) before being baked in the bhatti , the traditional mud furnace, usually on the terraces of houses here. Outside, several of the ready items are on display for visitors and vendors to buy.

The neighbourhood, locally also called Prajapati Colony or Kumhar Gram, is home to over 400-500 families, estimates Harkishan Prajapati, the pradhan of the colony “Many potters and helpers from Uttar Pradesh and Bihar have gone back to their villages because there was no work,” says 63-year-old Prajapati, winner of the National Award in 1990 and the government's Shilp Guru award in 2012. 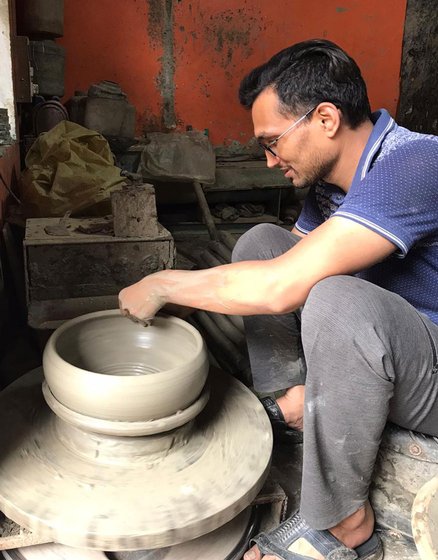 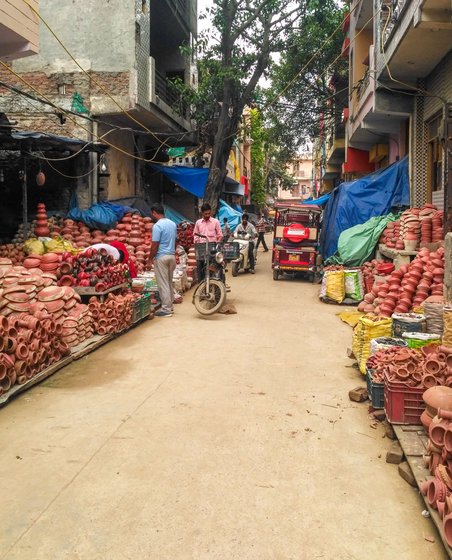 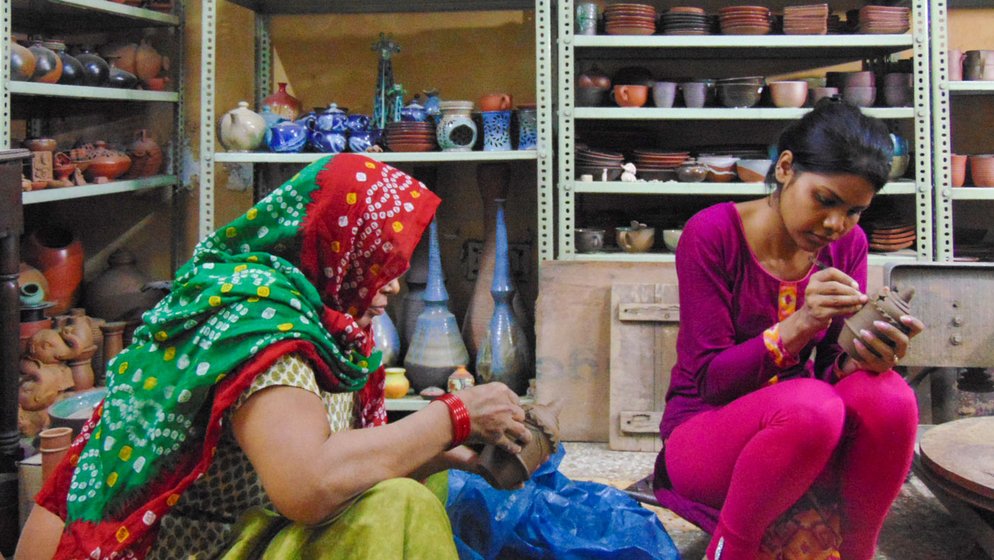 Narendra Prajapati (left): "...this virus has hit our work hard'. In Uttam Nagar, Ramrati and Rekha (right) have have been working on diyas but 'the joy is missing'

“This is the time of Ganesh Chaturthi and when work would start for Diwali, and everyone used to be busy,” he adds. “This year, everyone is in doubt about the market and unsure if people will buy their products. They don’t want to take a risk by spending much money [in preparing idols and other items]. I can see potters working, but they are completely hopeless…”

Prajapati’s wife, Ramrati, 58, and their daughter Rekha, 28, have been working on diyas , “but,” he says, “the joy is missing.” The women in the potters’ families in Uttam Nagar usually make the clay and clay dough, mould figurines and lamps, and decorate the ports with paint and carving.

“There was no work in the initial months of lockdown [March-April] because we couldn’t get the clay. We somehow managed the household expenses with our savings,” says 44-year-old Sheela Devi. Her work involves pounding the raw clay into fine powder, sieving it, then kneading it to make the clay dough – all by hand.

But Sheela Devi’s concerns about the impact of the lockdown have been echoing throughout the colony – perhaps far more than the sounds of the potters’ wheels. “Ganesh Chaturthi is on August 22,” says Narendra Prajapati, a 29-year-old potter. “But this virus has hit our work hard. So, if every year, for example, we could sell 100 Ganesh idols, this year it has been only 30. The cost of clay and fuel [wood waste and saw dust] has also increased during the lockdown – one trolley [tractor size] that cost Rs. 6,000 now costs Rs. 9,000.” (The clay for the pots and other items made in Uttam Nagar comes mainly from Jhajjar district of Haryana.) 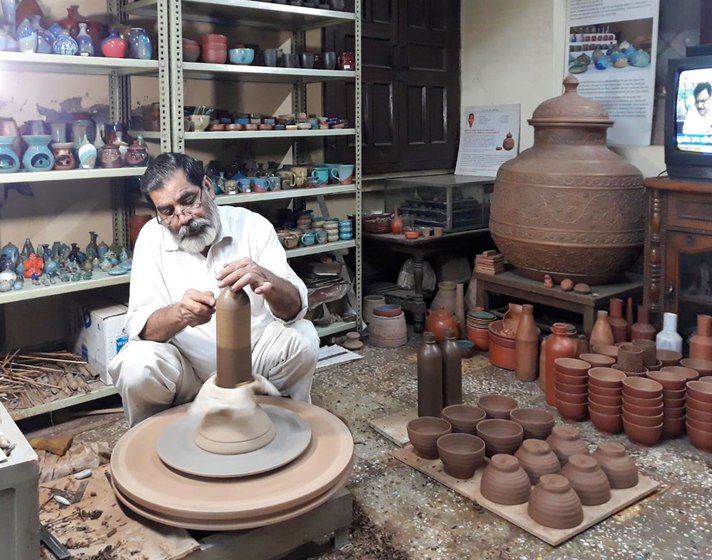 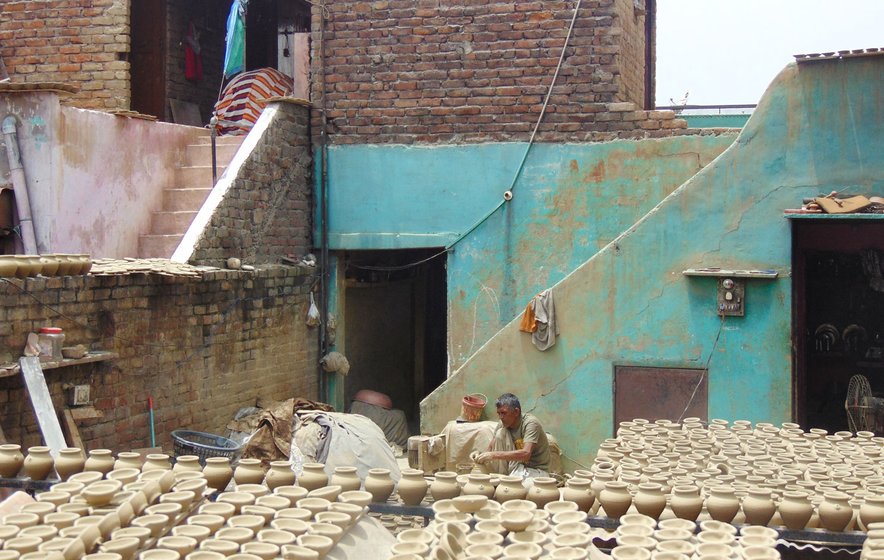 'Many potters and helpers from UP and Bihar have gone back to their villages...,' says Harkishan Prajapati (left), the  colony's pradhan

“The government talks about developing local businesses, but then asks us to shut down our furnaces. How is our work even possible without a furnace?” asks Narendra. “Is shutting down of units and leaving us with no source of income the solution?” The conventional mud furnace – now under dispute – costs around Rs. 20,000-25,000, while installing the alternative – a gas furnace – would cost around Rs. 1 lakh. Many potters of Prajapati Colony cannot afford this amount.

“They cannot even afford the minimum contribution,” says Harkishan Prajapati, referring to a community drive to collect Rs. 250 per potter to hire a lawyer to appeal against the National Green Tribunal order (of April 2019). The order had asked the Delhi Pollution Control Committee to furnish a factual report in the matter of wood furnaces. Based on this, the Committee issued directions in July 2019 that the furnaces must be dismantled. The potters have filed a petition in the Supreme Court.

This uncertainty deepened with the lockdown – and the slump in Uttam Nagar is reflected in other potters’ colonies across the country.

“Every year, during this time [March to June, before the monsoon] we would keep our stock of galle [piggy banks], gamle [planters], paani ke ghade (water pots] and tavdi [chapatti pans] ready,” Kumbhar Ramju Ali told me some weeks ago. “But after the lockdown, people are hesitant to spend money on buying such items, so the vendors didn’t demand them much. Every year, during the month of Ramzan, we would rest in the day and work at night. You could hear the tapping of pots all night. But this year during Ramzan [April 24 to May 24] it wasn’t the same…” 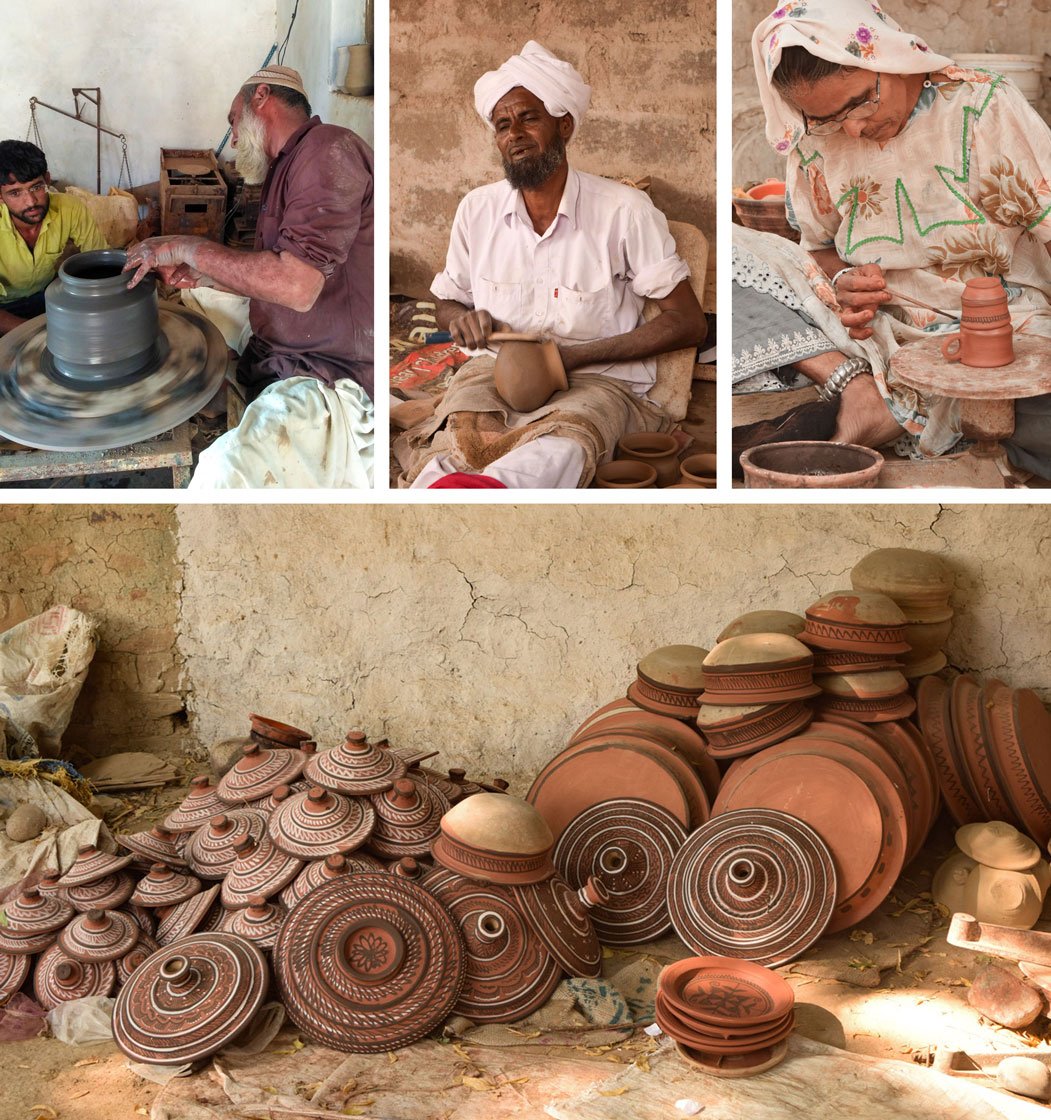 Ramjubhai, 56, lives and works in Bhuj, in Gujarat’s Kachchh district. He recalls selling clay products worth Rs. 25,000 to vendors for the Hajipir Mela, an annual fair organised on the first Monday of Chaitra (April) in Banni in Kachchh. But this year, due to the lockdown, the fair got cancelled

His son, Kumbhar Amad, 27, adds, “The demand for terracotta pottery like kulhads [cups] and vadki [bowls] has slowed due to the shutting down of hotels and food businesses during the lockdown. And many potters in rural areas here only make kulhads to earn a living.”

Voicing another growing concern, Ramju Ali says, “Even getting clay for our work is not so easy now. The brick industry is the biggest threat to us as they dig out all the clay [mainly from the nearby Haripur locality] and we are left with almost nothing.”

A few houses away from Ramjubhai’s house in the Lakhurai locality of Bhuj, lives Kumbhar Alarakha Sumar, 62, who is partially visually impaired. He told me, “I kept a gold chain on mortgage with a local bank and borrowed some money to pay the ration shop and manage other expenses [during the lockdown]. I have slowly begun to pay back this amount after my sons could go out for work.” He has three sons; two are construction labourers, and one is a potter. “During the first months of the lockdown [March to May], I was making galle , but after a while, when all the stock kept lying and there was no more space to store in the house, I had no choice but to sit idle and not work for many days.”

Around 35 kilometres from Bhuj is Lodai village, home to 56-year-old Kumbhar Ismail Hussain. He said, “We usually make cooking and serving vessels decorated with our traditional style of Kutchi painting [done by women in the family]. We used to get orders from tourists who would come to see our work. But due to the lockdown, nobody has come to the village since the last there months…” Ismailbhai said he saw no sales at all from April to June, when on average he used to earn Rs. 10,000 a month. He isn’t yet back to business, he added, due to some family issues. 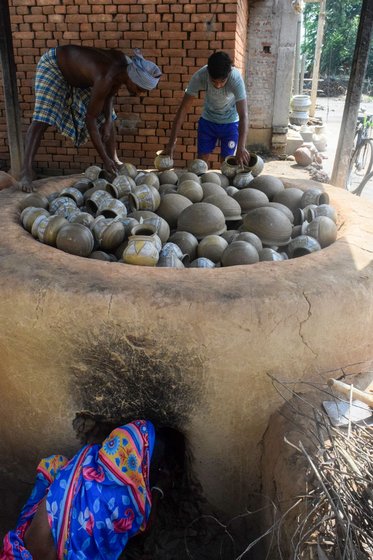 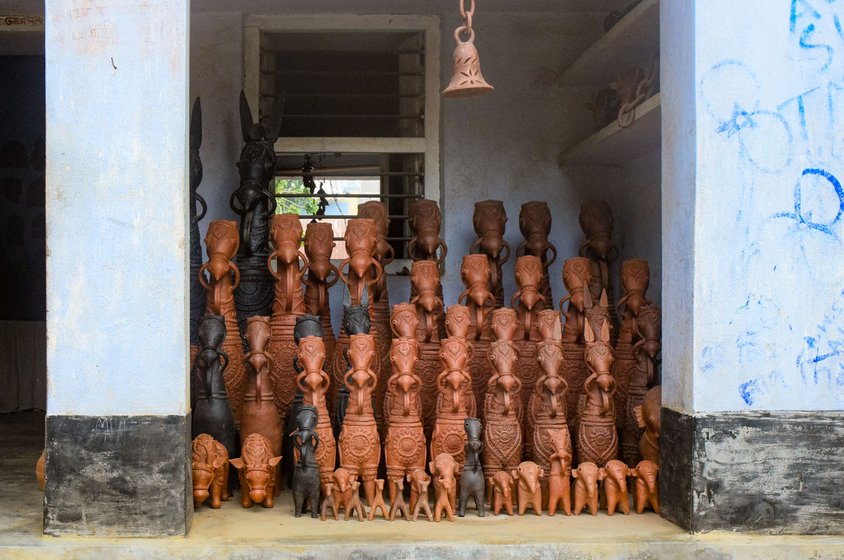 In the potter's colony in Panchmura, West Bengal, local Adivasi communities were the only buyers in the lockdown for traditional votive horses (right)

Speaking of how this year has not been favourable to his family, Kumbhar Saleh Mamad, 31, also a resident of Lodai, said, “At the beginning of the lockdown, we lost our sister due to cancer. And Ammi just underwent an intestinal surgery but didn’t survive… There has been no work in the family for the last five months.”

His mother, Hurbai Mamad Kumbhar, 60, was a potter of extraordinary skill and knowledge of traditional Kutchi motifs. She had been the family pillar since Mamad Kaka, her husband, had a stroke leading to paralysis last year.

And across the country, in another potter’s colony, this one in West Bengal, Bauldas Kumbhakar, 55, of Panchmura village of Bankura district, told me, “The village is deserted for the last few months. No visitors could come here, neither could we go out due to the lockdown. Many people used to come to see our work, buy products and give orders. But this year I don’t think anyone will come.” Bauldas is among the 200 members of the Panchmura Mritshilpi Samabhay Samiti, run and managed by the potters for marketing and sales.

In the same village, located in Taldangra taluka , Jagannath Kumbhakar, 28, said, “We mostly make idols, wall tiles and decorative items for interiors. There was no order in the first two months of the lockdown and our only buyers were local tribal communities, who gave us personalised orders for pots, horses and votive elephants. Many potters started work after April and kept some stock ready hoping for sales in the upcoming festive season. But this time we have very limited orders for Goddess Mansachali and Durga Thakur idols for Pujo [the annual Durga Puja]. This time, the celebration in Kolkata and other places will not be as grand as every year.”
#potters #Ramzan #terracota #Kumhar-Gram #Shilp-Guru #furnaces #lockdown #National-Green-Tribunal #covid-19 #Ganesh-Chaturthi
Srishti Verma

Srishti Verma is crafts designer and researcher based in New Delhi. She works with NGOs and institutions on documenting material culture, social design and sustainability, and rural crafts and livelihoods.

Other stories by Srishti Verma