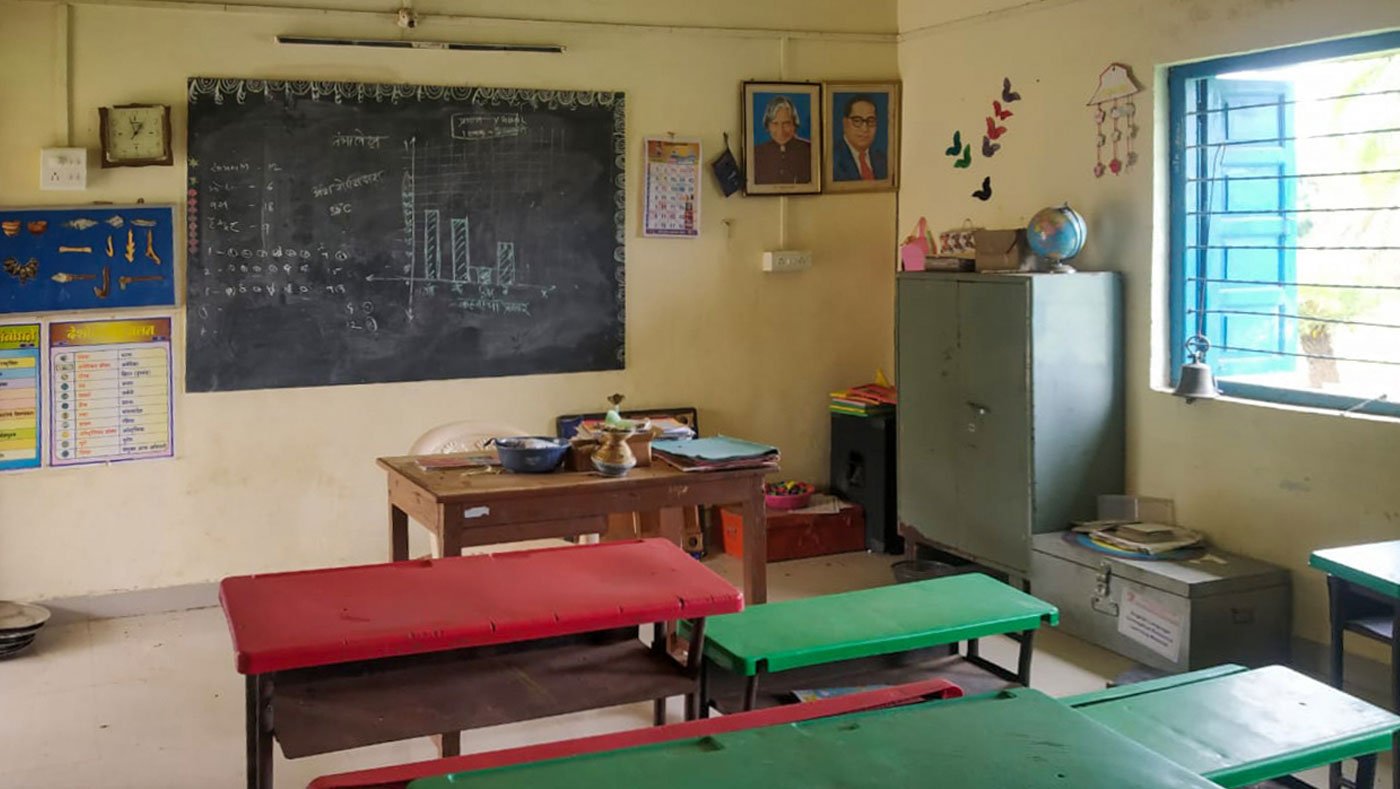 What does the rush to ‘online education’ look like on the ground in a poor Adivasi area like Talasari in Maharashtra’s Palghar district? PARI explores how that further spurs already serious inequalities

It took a down payment of Rs. 2,500 for Rajesh Andhare to get his hands on a smartphone for the first time in his life. Two years later, he still can’t operate it. “It was a gift for my older child Dinesh, who had passed out of school,” says 43-year-old Rajesh. “We paid the remaining amount in five instalments of Rs. 1,000. The phone cost around Rs. 7,500.”

The smartphone is with 16-year-old Dinesh, but at home in Dongari village of Maharashtra’s Palghar district, Rajesh too has tried using it – without success.

That phone cost Rajesh roughly what he earns in a month of work as a labourer – at between Rs. 250-300 a day. “I tried to learn to use it,” he says. “But I gave up after a few days. I am good with my old phone, which has a proper keypad.”

His son’s generation, even in the difficult terrain and conditions of difficult Talasari taluka – with a majority Adivasi population of low-income families – is far more adept at using smartphones. But undermined by both costs and connectivity.

This tribal belt along the Gujarat border is just 130 kilometres from Mumbai – but very poorly connected to the internet. “Even electricity supply is intermittent, especially during the monsoons,” says Rajesh, who belongs to the Warli tribe.

So if you see a group of boys in Dongari sitting under a tree, it’s a safe bet that the spot has some semblance of network. One or two among the group would have a smartphone, while the rest would be staring at it in excitement. And yes, they would be boys. It’s hard to find girls here who own a smartphone. 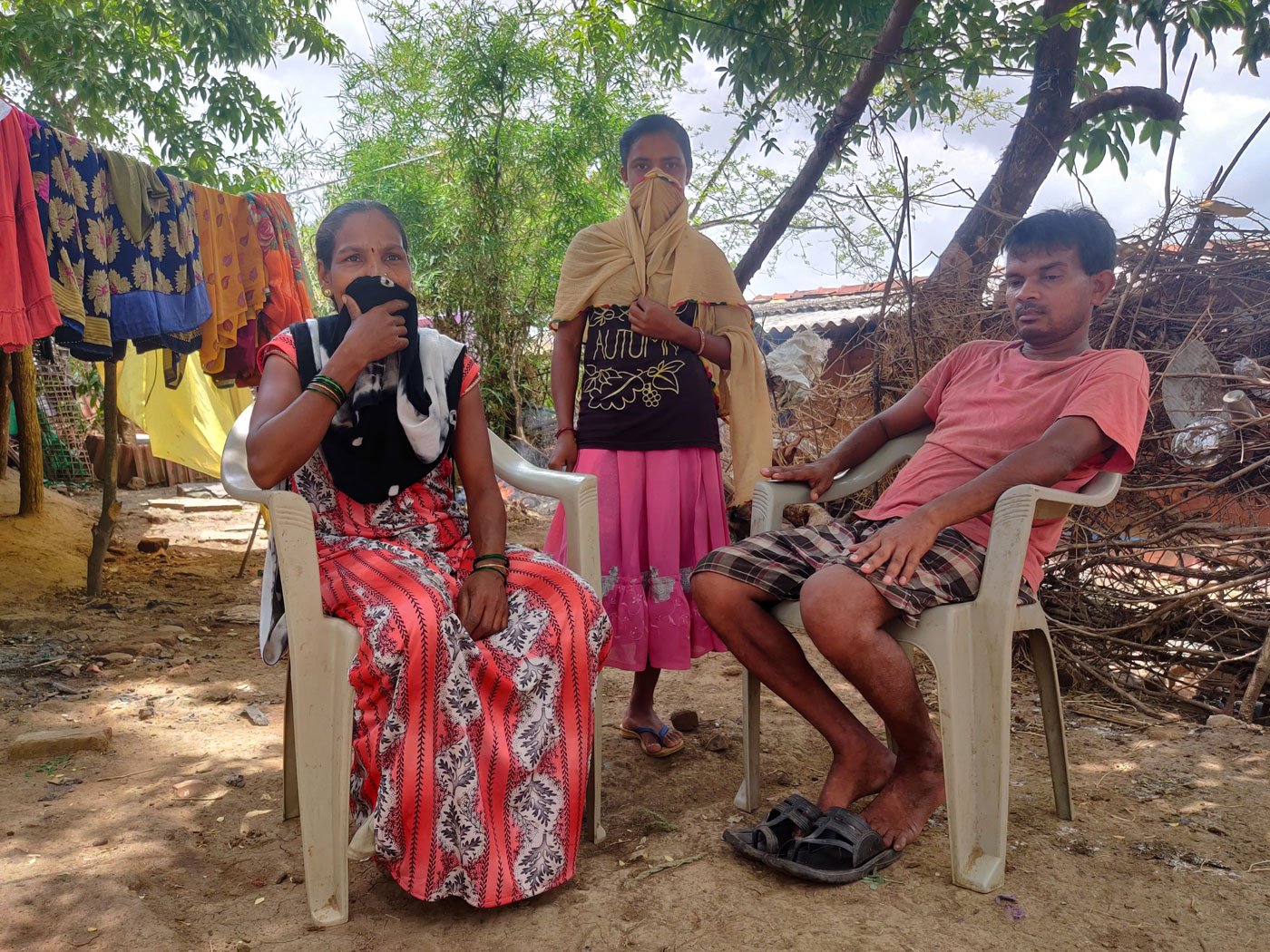 Rajesh Andhare, a labourer, spent a month's earnings to buy a smartphone for his son Dinesh. Here, with his wife Chandan and their daughter Anita, who is doubtful about learning through  a phone

How then are the many millions of poor students in the rural districts of Maharashtra going to cope with the fast-moving shift to ‘online classes’ and education in the wake of the coronavirus-induced lockdown? There are over 15 million students in just primary schools alone, says the state’s economic survey ,  77 per cent of those in rural districts. Many of whose parents are as financially stretched as Rajesh Andhare.

“This is nothing but digital partition,” says Bhau Chaskar, a schoolteacher and activist in Akole town of Ahmednagar district, of the race to online teaching. “WhatsApp can’t be a proper medium of education.”

On June 15 this year, the government of Maharashtra issued a circular laying out the challenges of starting the academic year. It explored possible ways around a crisis that has seen schools everywhere closed for three months now.

“Going forward, it would be critical to impart education through different means,” said the circular. “We would have to avoid the usual lectures. The students would have to study on their own and teachers could clear their doubts later. We have the availability of TV, Radio, and other online means. We should use that.”

In practice, the emphasis is on the online track.

Since the June 15 circular, Ravi Rakh, a teacher at the zilla parishad school in Dongari village, says he and his colleagues have noted the numbers of those who have a smartphone in their house. “We have a WhatsApp group of teachers where we receive PDF files or videos with necessary instructions and syllabus for kids,” he says. “We forward them to those who have a smartphone at home. We request the parents to make the smartphone available to the kids. They say yes, but it is not working out well.”

It’s hard to imagine how it could work out otherwise. 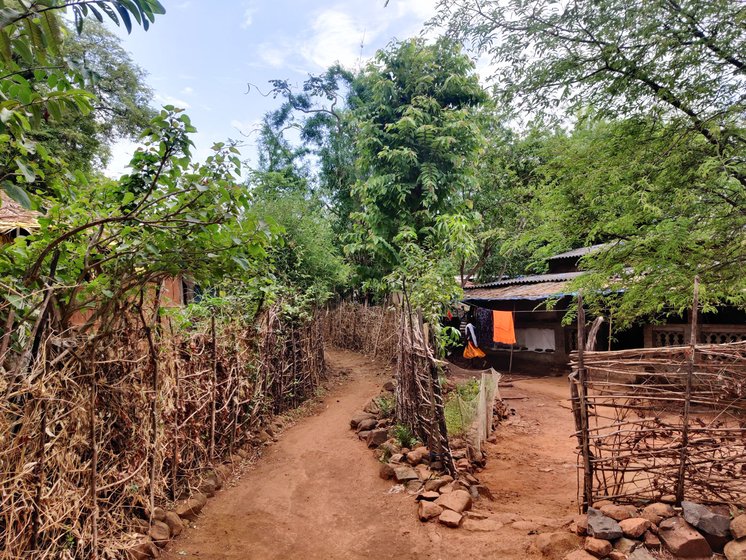 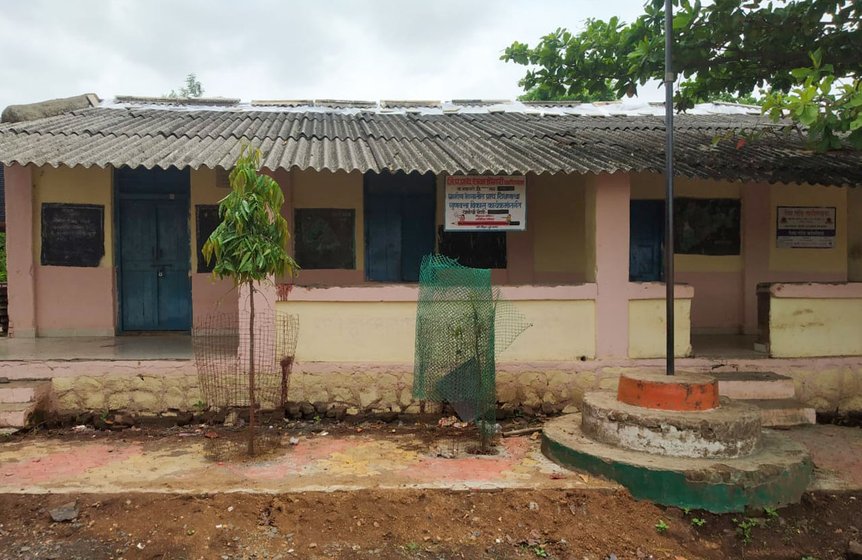 Most students with smartphones are aged 16 and above in Dongari village, where the zilla parishad school (right) is up to Class 8

Just 18.5 per cent of rural households in Maharashtra had any internet facility, says a 2017-18 report of the National Sample Survey. And merely 1 in 6 people in rural Maharashtra had the “ability to use Internet.” Among women, that was 1 in 11.

The report further noted that only 1 in 7 people in rural Maharashtra had been able to use the internet in the 30 days prior to the survey. For women, that was 1 in 12. Among the most disadvantaged in this regard would be Adivasis and Dalits, who form 9.4 per cent and 12 per cent, respectively, of Maharashtra’s population.

In these tribal areas, higher education mirrors the state of the schools, points out a Bombay University and College Teachers Union survey. Authored by Dr. Tapati Mukhopadhyay, and Dr. Madhu Paranjape, the June 7 report, which looked at the Jawhar taluka of Palghar district, found “everything has been stopped. The campuses are closed and there is no teaching or extracurricular activity.” Internet connectivity, where it exists at all, has very poor bandwidth. Power supply is dismal. “There cannot be any online teaching/ learning in this situation,” they assert.

Bhau Chaskar warns that those kids who get left behind because they cannot afford costly gadgets “could develop an inferiority complex.” He argues that the reach of TV is much better in rural areas, and says, “The state government should start a channel, where we can teach and get pupils involved in activities. For that, the state should prepare a workbook immediately. The Kerala government did something similar. The [Maharashtra] circular mentions TV and Radio, but there is no planning on how we could use it."

Rajesh Andhare’s younger child, Anita, 11, studies at the zilla parishad school in the village. Does her elder brother Dinesh part with his phone when she needs it to study? “He does, but reluctantly,” Anita says. “Even before the lockdown, he didn’t let me use it much.” 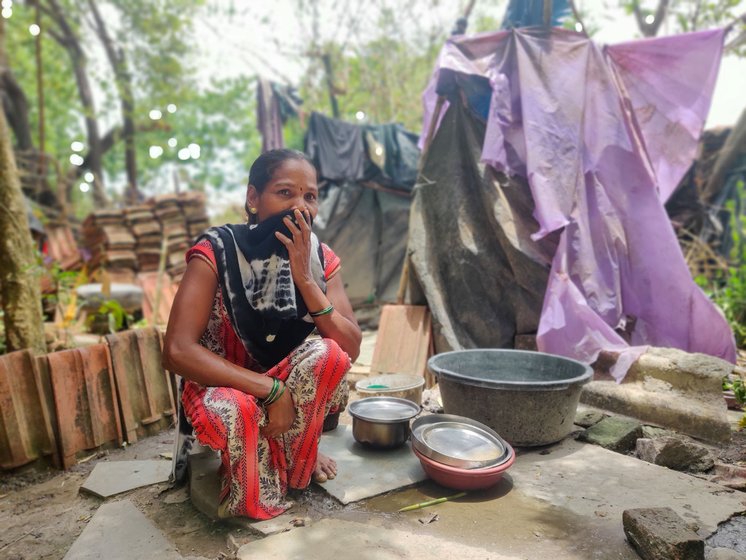 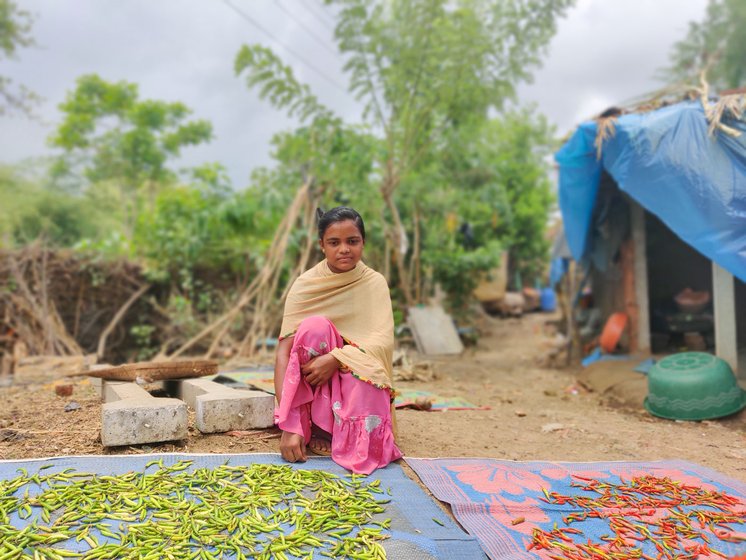 'The kids were well looked after by their teachers [when schools were open]', says 40-year-old Chandan (left), Anita’s mother

Over the past two years, Anita has familiarised herself with the smartphone to some extent. But she is doubtful about learning through it. “I can’t imagine an online class. What if I have a query? If I raise my hand, would the teachers be able to spot it?”

Vikloo Vilat, 13, has no such concerns. This Class 8 schoolgirl from a neighbouring hamlet in the same village has never held a smartphone in her hands, let alone wondered what an online class would look like. Her father, Shankar is, like Rajesh, a poor labourer. “We have just under an acre of farmland,” he says. “I make my living out of labour work like everyone else here.”

So what about those who have no smartphones at all? Ravi Rakh, the schoolteacher in Dongari, says the teachers have distributed textbooks to all the students in any case. “We have told them to start reading some of the lessons,” he says. “We requested the parents to keep an eye on their work, but it is a bit too much to ask.”

Normally, when schools opened around this time in past years, parents had few qualms about leaving home for work. “The kids were well looked after by their teachers,” says 40-year-old Chandan, Anita’s mother. “They got their mid-day meals in the afternoon, so at least one meal was taken care of. We didn’t have to worry.” 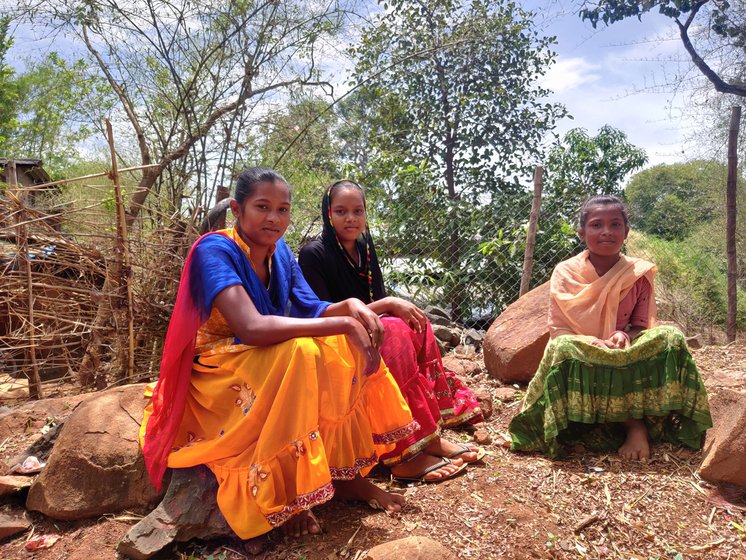 But now they do, under the lockdown. Labourers in this belt, always struggling to make ends meet, are seeing the situation worsening. With economic activity slowly resuming, the parents are out and about. “We want to make up for the past two and a half months,” says Shankar. “Plus, we will soon start sowing paddy in our own farmland. It is for self-consumption, not for sale. With labour on our own farm and outside it, we cannot afford to sit at home and check on the kids.”

Saddling the parents with the responsibility of ensuring the children are reading textbooks, or the PDFs they receive on WhatsApp, places them in uncharted territory. “We have not studied much either,” says Chandan, “and cannot tell whether they [the kids] are working properly or not. They would be better off at school. Yes, there is a fear of coronavirus. But if the government restarts the schools, we will send Anita.”

Internet literacy among parents here is negligible. And only a few families can afford to have one smartphone in the house. Besides, says Rakh, “In Dongari, ours is an upper primary school up to eighth standard. The students who have  smartphones are aged 16 and above.”

The June 15 government circular said schools could begin reopening step by step provided there were no coronavirus cases in those villages. Students studying in Classes 6-8 could start returning to school from August 2020. Those in Classes 3-5 could resume a month after that. For kids enrolled in Class 1 and 2, the circular left it to the discretion of the each school management committee.

Before re-starting, the circular added, “Every school in the state should work out sanitisation, seating arrangements and sanitation facilities.” And “if the school has to shut down after opening up because of coronavirus, preparations should be made to continue the education online.”

But teachers in Talasari are uneasy about reopening schools even though the taluka is a green zone with zero active cases. 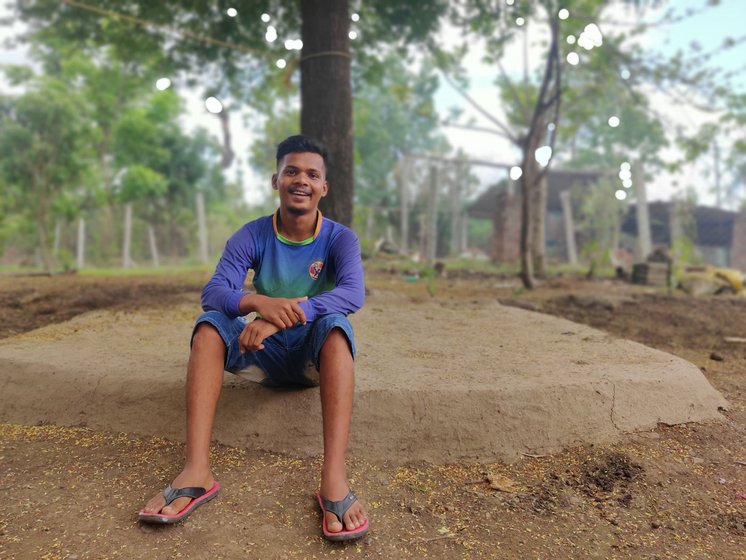 Ankesh Yalvi uses online education apps, but only when there is network

Dattatray Kom, a teacher at one of the zilla parishad schools in Talasari town, finds the idea risky. “We may not have active cases, but neighbouring Dahanu taluka does,” he says. “Many teachers in Talasari travel back and forth from there, and from other places. Several parents working as labourers often travel out of our taluka.”

Kom points out that the schools would first need an adequate number of masks and sanitisers to protect children and teachers. And, he says, they have “to figure out how to distribute mid-day meals safely. Usually, they are prepared in one huge utensil and served to the children.”

Teachers also doubt they can ensure that kids aged 7-13 maintain physical distancing at school. “They are going to be naughty, they are going to be playful,” Kom says. “God forbid – if they contract coronavirus, the teachers would ultimately be blamed. We don’t want that guilt.”

Back in Dongari village, Ankesh Yalvi, 21, is preparing for competitive exams that will give him a chance to be a government employee. He uses a smartphone and a paid-for online education app and service but says, “I can only do it when the network is good.”

Ankesh does not mind sharing his phone with his 12-year-old sister Priyanka,  so that she too can study. "But if both of us start using the phone regularly, we would need a more expensive data package,” he says. “We are currently spending Rs. 200 a month for 2 GB per day."

In Talasari town, just 13 kilometres from Dongari village, nine-year-old Nikhil Dobhare is one of the fortunate few to own a good smartphone – it cost four times what Rajesh Andhare paid for his.  He studies in a private school and his father teaches at a ZP school in town. Nikhil also has access to relatively better network.

But, says his father, “he doesn’t seem to be enjoying it…”

"I can't wait for school to reopen," says Nikhil. "I miss being around my friends. Studying is not fun if you are doing it alone."