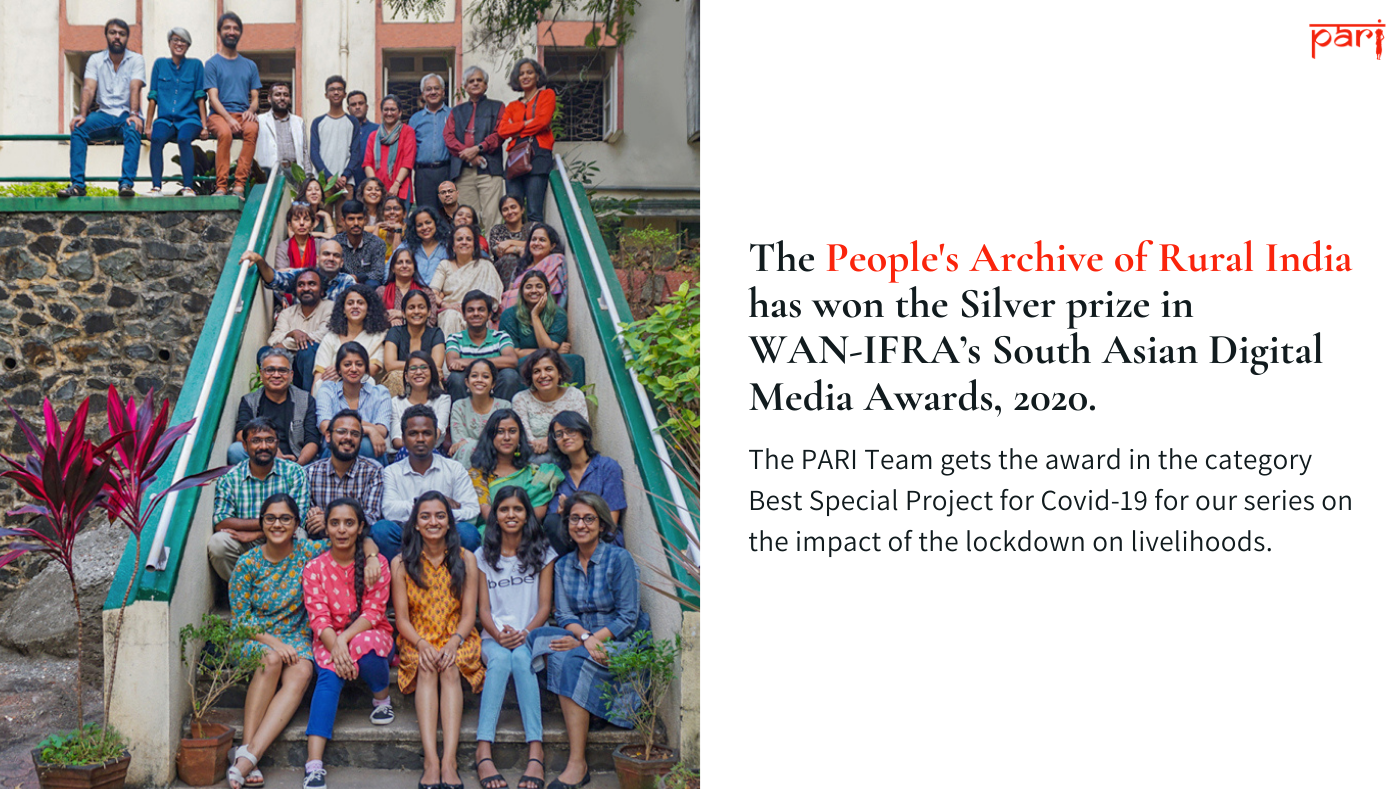 The People’s Archive of Rural India has won the Silver prize in WAN-IFRA’s South Asian Digital Media Awards, 2020 – Best Special Project for Covid-19 – for our series on the impact of the lockdown on livelihoods

The People’s Archive of Rural India has won the Silver prize of WAN-IFRA’s South Asian Digital Media Awards, 2020 . PARI bagged the Silver in the ' Best Special Project for Covid-19' category.

This win is for the entire PARI Team, which has published about 150 landmark stories and documents related to the impact of the lockdown on livelihoods and on the daily lives of the most marginalised segments of India.

Our body of work covers over 20 states and 35 regions. Of these, about 110 are PARI articles, reports from the field, multimedia stories, photo essays and videos. And some 40 are documents, reports and laws extremely relevant to the pandemic-lockdown period, which we have put up in full text – along with summaries and key points, in the PARI Library . Included in this 150 are also songs, poems and paintings inspired by the great migrant journeys and the lockdown.

This is PARI’s 27th journalism award and our fourth in four months.

This is the 27th award won by PARI since we launched in December 2014. The full list so far:

27. WAN-IFRA ‘s South Asian Digital Media Awards, 2020
The PARI Team won the silver prize of WAN-IFRA ‘s South Asian Digital Media Awards , 2020. PARI bagged the Silver in the category 'Best Special Project for Covid-19'. Beginning from the last week of March, PARI has published nearly 150 landmark stories and stories and documents related to impact of the lockdown on the livelihoods and daily lives of the most marginalised segments of India.

24. Prem Bhatia Memorial Trust, New Delhi, 2020
The PARI Team won the Prem Bhatia Award for journalism on Environment and Development issues “for its extensive field reports, including climate change effects and the impact of the pandemic on rural India.”

15. The Statesman, Kolkata, 2018
PARI Author Puja Awasthi won the Statesman Prize for Rural Reporting for two stories published on PARI on July 5 and  August 3, 2017: Beaten but unbowed – Sunanda Sahoo's silent struggle and Drums and dreams beyond pickle and papad .

3. National Film Awards, Government of India, New Delgi, 2016
PARI Fellows Nidhi Kamath and Keya Vaswani received the Silver Lotus (Rajat Kamal) for the Best Promotional Film at the 63rd National Film Awards 2016 for their film Weaves of Maheshwar , published on PARI on May 2, 2016.