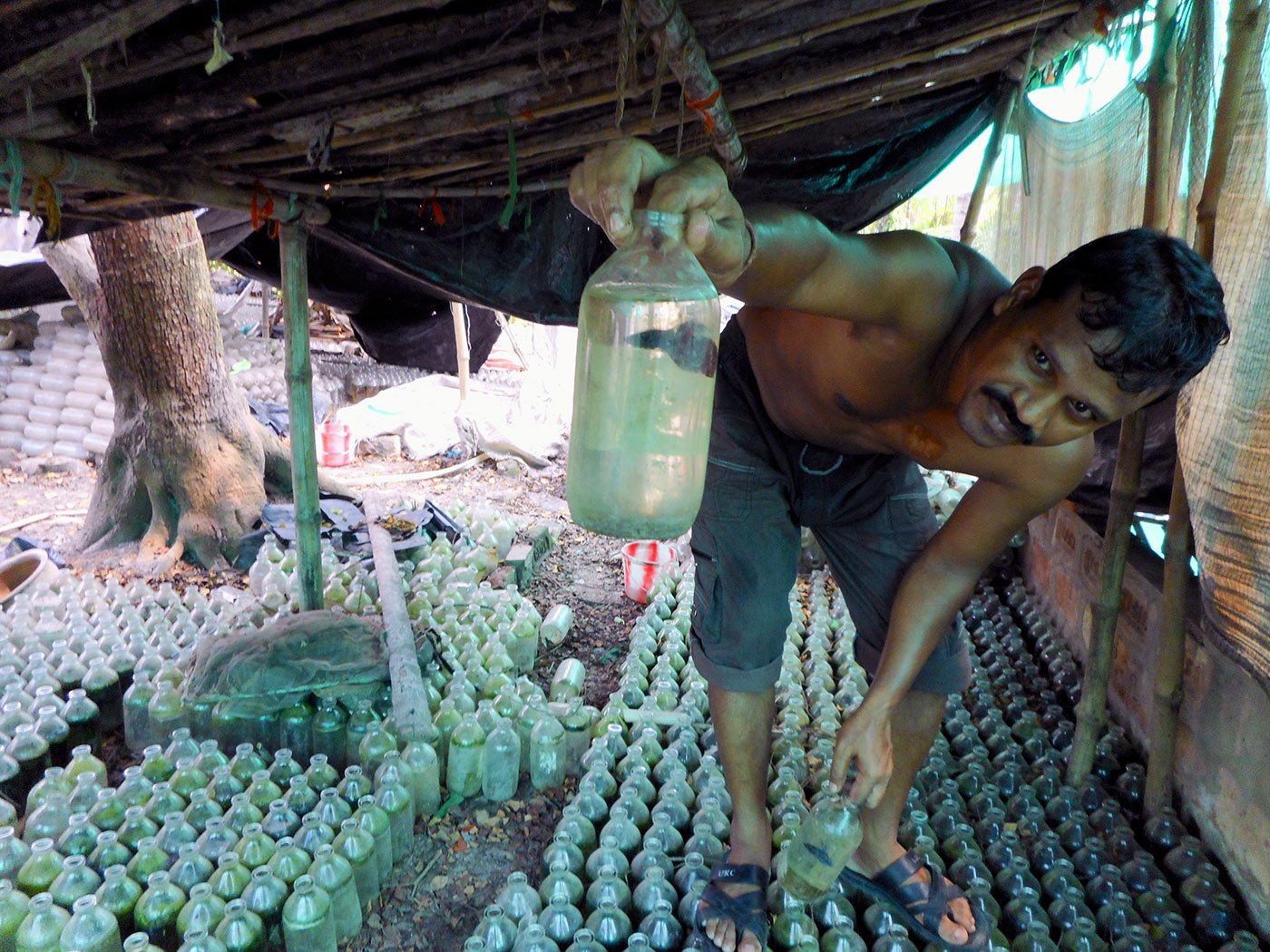 Bringing up Mollie in Udayrampur

Ornamental fish farming in the villages of South 24 Parganas, West Bengal, requires meticulous work, and even though income from the trade is uneven, farmers ‘raise’ the fish like their own children

Angelfish and peacock fish, guppies, mollies and others are all swimming around in aquariums, tanks and vessels in a darkened room in Kandon Ghora’s house. “It is intimate work. They have to be raised like children," he says.

Kandon is a fish farmer in Udayrampur village of South 24 Parganas, West Bengal, around 30 kilometres from south Kolkata. His entire family is involved in ornamental fish farming. As are 50-60 other families, he estimates, in the three hamlets of Ghora Para, Mandal Para and Mistri Para, in this village of around 540 families.

Like fish farmers in other parts of West Bengal, Tamil Nadu and Kerala, they breed and rear over 200 varieties of colourful indigenous and exotic species for sale to ornamental fish enthusiasts across the country. 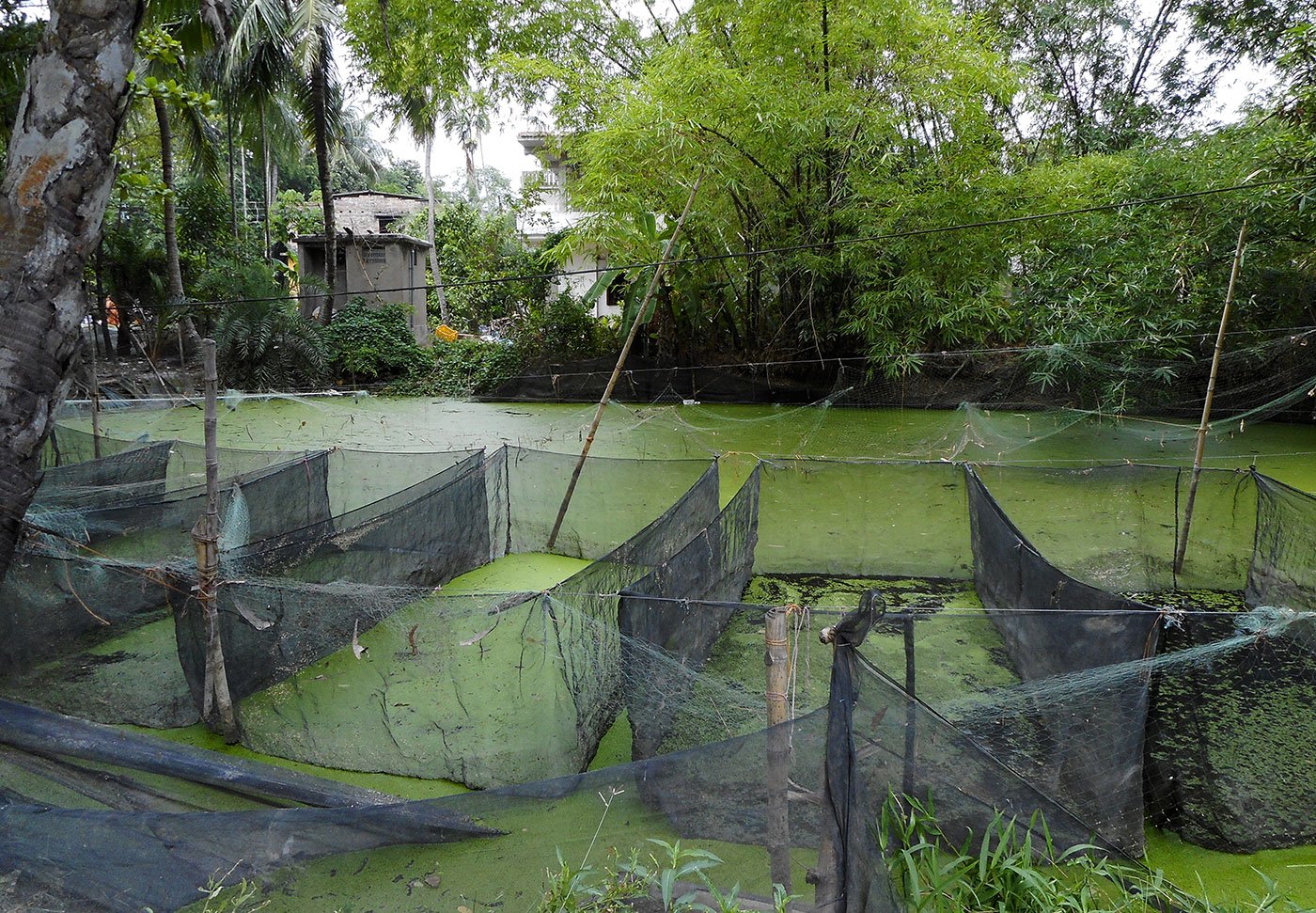 Kandon Ghora’s family has graduated, over 25 years, from rearing fish in small earthen bowls to cultivating ornamental varieties in this pond

Coconut and betel trees flank the green expanses of water in the hamlets. Hens from various households wander around, and children cycle back from school around mid-morning. And sometimes, potential customers turn up for a closer acquaintance with the fish before buying them at the Galiff Street pet market in Kolkata, where retailers gather on Sundays.

Behind Kandon’s home, the fish pond his family owns is covered with nets, as are ponds owned by other fish farmers. "The pond has to be prepared for the full spate of the rainy season, when fish-farming is at its peak," he says. In a room in his small house are the varieties that have to be reared indoors.  Often the eggs get destroyed, he says, so the volume of fish sold at the market varies: on an average it is 1,500 a week. "The income from the trade is uneven, never crossing Rs. 6000-7000 a month," Kandon says.

Rearing the fish and readying them for the market is a skill handed down from generations in Udayrampur, and everyone in the family knows how to care for them. Each member can even recognise and tend to symptoms of illness in the fish. “When they become sick or injured, they usually float near the water’s surface," Kandon says, "and they stop eating. Some turn pale and their tails acquire a white tinge." Medicines for the fish are available in a local store in Amtala. "To bring them back to health, we keep them in a separate vessel, and often strictly on a medicine diet, stopping their regular food intake."

Kandon Ghora with his wife Putul (left) and with daughter Disha (right): 'I will probably continue to teach at home and look after the fish', Disha says

Kandon’s family’s journey of fish cultivation started around 25 years ago from basic earthen vessels, shifted to earthen and plastic tubs (or majla), and then grew to the pond and the indoor aquarium. Kandon inherited his love of fish from his father, he says. “This is our only means of earning our way in the world. We cannot abandon it. Our children are studying in the city but they will eventually return to this trade." His wife Putul agrees; she too is from a family of fish farmers.

Their daughter Disha is studying for a graduate course in philosophy at Vidyanagar College. When we visit, she is teaching a few kids in a patch of corridor in front of her room. "I will probably continue to teach at home and look after the fish," she says.

Udayrampur resident Tarubala Mistri wears fish-shaped gold earrings. 'What we earn from this occupation does not make ends meet, but do not have any other option,' she says

As we walk further into the village, we see ponds with men and women knee-deep in water, netting small insects from the surface to feed the younger fish. As the fish grow, they graduate to a diet of sludge worms – which too are skimming the fishponds. On the way, we meet Tarubala Mistri, carrying firewood. "What we earn from this occupation does not make ends meet, but do not have any other option," she says. Her (and the community's) love for fish is reflected in her earrings.

At another fish farmer, Uttam Mistri’s home, the fish are reared in wells; he specialises in fighter fish. These must be given their own space to avoid fights; the younger ones inhabit earthen pots while the adults are kept in rows of bottles in the shade. Uttam is putting their weekly meal of sludge worms into the bottles when we arrive. “If they eat more frequently, they will die,” he says.

Among the fish farming neighbourhoods, there is an implicit understanding about who will raise which fish on a larger scale, so that the trade is balanced. Mistri, unlike Ghora, does not visit the Galiff Street market to sell the fish; he hands them over to retailers.

Along the path that forks into Mondal Para, we come across Golak Mondal plucking wayward weeds. Nearby, a papaya tree bends into the family pond where women are netting worms. Golak shows us his collection of guppies and mollies. He rears his fish in a tank, a few vessels and the pond on a patch of land owned by the family. Fighter fish are reared in bottles on the roof of his small house.

Bappa Mondal rears a variety of fish including the bright orange mollies (right). He hopes to increase the scope of his fish farming by acquiring more land

Mondal's gold and angelfish cost Rs. 5 and Rs. 2 each. He charges Rs. 150 for a fighter fish, and the same for a packet of a 100 guppies. "Our profits are uncertain, and no more than Rs. 1,000 in a week," he says. "And sometimes, we have to sell them at a loss."  Mondal dreams of extending the family trade, and wants to buy more land nearby for better fish farming.

His son Bappa, 27, works part time at an automobile company and plans to take up fish farming more seriously. "When qualified people in the cities do not get jobs, we cannot nurture high hopes," he says. "We are better off, at least we have a trade to stick to."

Barnamala Roy has a postgraduate degree in English from Presidency University, Kolkata; she has worked as a sub-editor at ‘Kindle’ magazine, and is a translator and freelance writer.

Other stories by Barnamala Roy