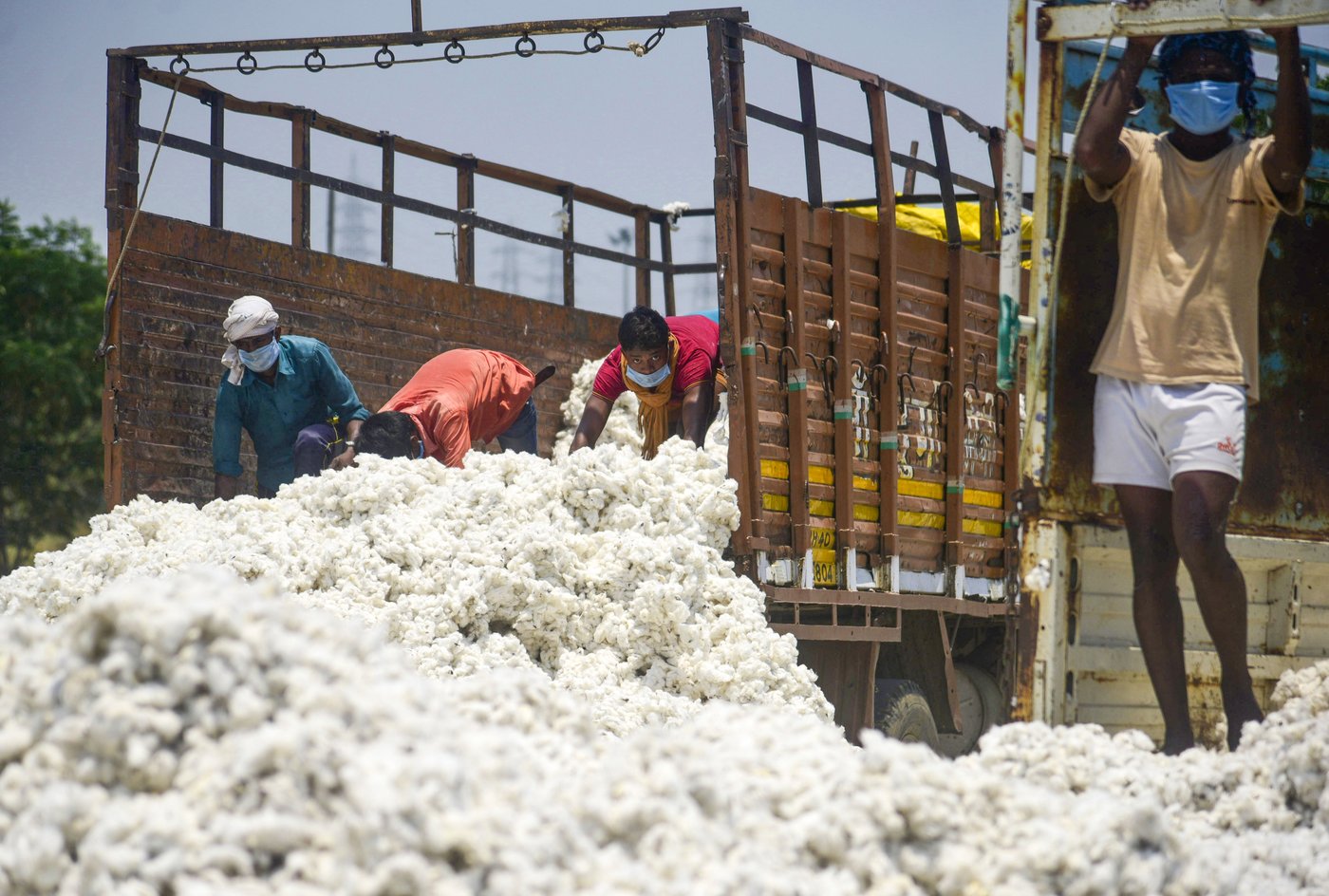 Cash crops, Covid and the cost of unsold cotton

Huge quantities of cash crops lie unsold across India – like cotton in Maharashtra. A hunger crisis looms, yet farmers in Vidarbha plan to sow cotton, not food crops, once again this kharif season

Seventy-year-old Kisan Sakhru Pawar, patriarch of a joint farming family in Maharashtra’s Yavatmal district, is very anxious. The climbing Covid-19 graph is not the main reason for his anxiety.

“We have 350 quintals of cotton, 100 quintals of tur [pigeon pea], and at least 50 quintals of green gram,” a worried Pawar told PARI over the phone.  The cotton is from all pickings of the last season. The tur has been lying with him since the previous kharif season. The remaining produce is from the rabi harvest of this March-April.

Thousands of farmers across the country are in the same position as Pawar – they’re unable to sell their cotton.

And here’s the puzzle: Kisan Pawar and thousands like him plan to sow cotton again this kharif season.

The crop harvested from his family’s 50 acres in Pardi (Naskari) village of Ghatanji tehsil, about 170 km from Nagpur, is worth Rs. 25-30 lakhs. “That’s all of our income,” says Kisan Pawar.

Those 50 acres are jointly farmed by the families of Kisan Pawar and his two siblings, totalling 30 members. His own share of the land is 18 acres. But the families look after the land together, not as separate holdings. 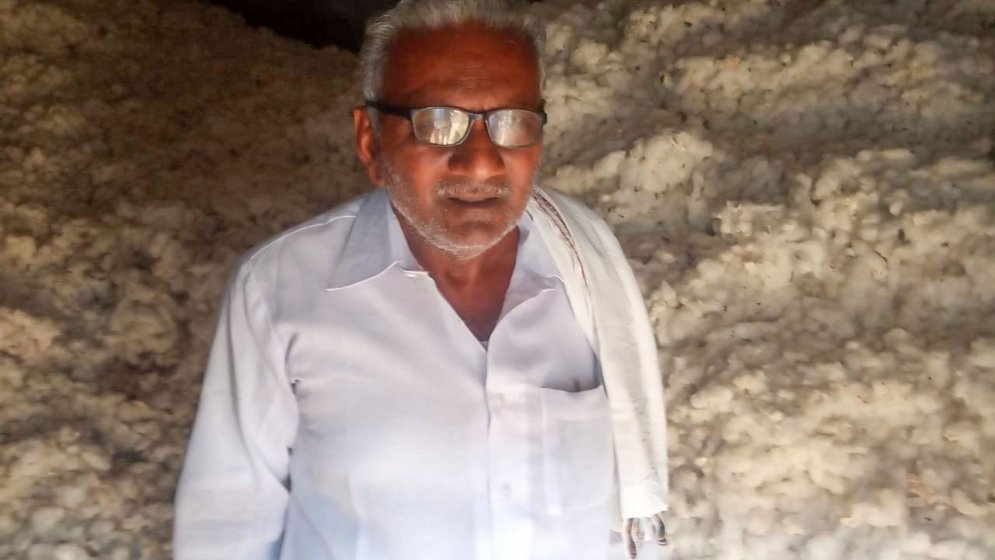 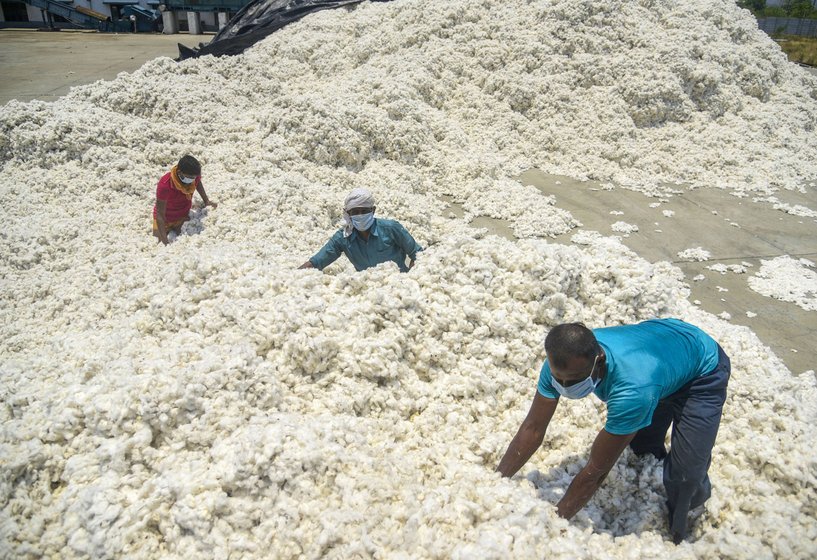 Pawar had not sold his cotton earlier because rates fell below the minimum support price (MSP) of Rs. 5,500 a quintal in January and February. In late February, he sold 40-50 quintals, at Rs. 4,500 per quintal, to pay off the labourers’ wages.

He had decided to hold out for April when demand does go up. The trend in recent years, he says, has been: cotton prices drop in January-February and rally in March-April.

But what came in March was the lockdown.

Now, as the Covid-19 crisis worsens and the lockdown is in its third month, there are no buyers, and agriculture supply chains have been massively disrupted.

Pawar is among countless farmers from across Maharashtra, indeed the whole country, stuck with unsold cotton (and other rabi produce, particularly cash crops).

The central government’s apex marketing body in this sector, the Cotton Corporation of India (CCI), and state-level agencies, have kept open some 150 procurement centres in Maharashtra. However, a staggered procurement preceded by online registrations and long e-queues, is testing the patience of desperate sellers like Pawar.

Thus far, the CCI has procured 93 lakh bales of cotton (roughly 465 lakh quintals) across India. That’s greater than its previous highest of 90 lakh bales in 2008. And almost nine times its average annual procurement nationally, this past decade. It intervened on such a scale because private traders stopped procuring cotton after mid-March, as the country moved towards a lockdown.

Besides, traders were pushing down prices before Covid-19 to Rs. 5,000 a quintal, which saw farmers opt for selling to the CCI at Rs. 5,500. Now the traders are not procuring cotton at all. Meanwhile, the CCI and the state government, reluctant to further strain their fragile finances, are not inclined to buy any more. 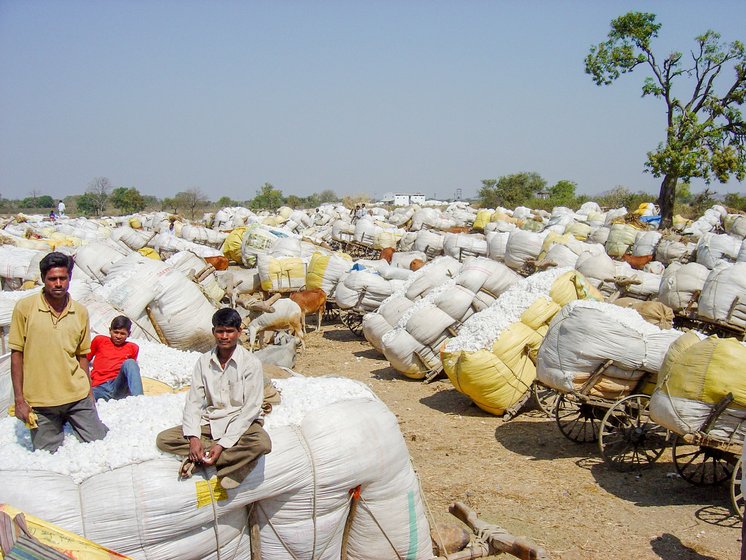 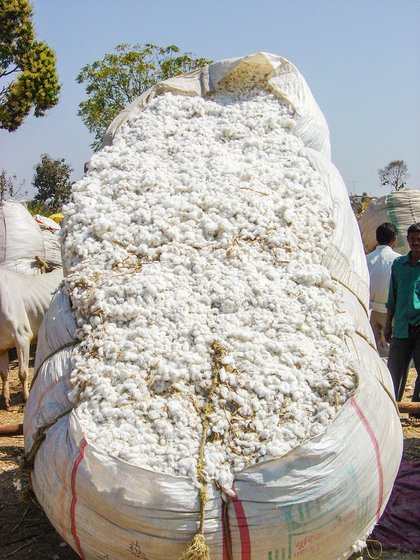 'There are 2,000 trucks at the CCI centre in Ghatanji, but they buy about 20 trucks worth a day,' says Kiran, Kisan Sakhru Pawar's son

By end-May about 200,000 farmers, mainly from Vidarbha, Marathwada (two of the worst affected regions in farmer suicides), and Khandesh in north Maharashtra, have registered online to sell their cotton. But thousands of others likely have not, state officials say off record, citing the cumbersome process and uncertainty.

In 2018-19, says farmer leader and agrarian intellectual Vijay Jawandia, cotton seed prices did well in a drought year, even if those for cotton lint did not. The lack of fodder for cattle meant the demand for cotton seed oilcake went up. (Seed accounts for 65 per cent of the weight of a quintal of cotton.) “This year,” he says, “that is not the case. And prices of both cotton lint and cotton seed have been pushed downwards. Last year we exported 50 lakh bales of cotton, the biggest chunk to China. Even if we repeat that feat this year, it would be at much lower prices. And the lockdown has ravaged both prices and the supply chain.”

And so the mountains of unsold cotton keep growing.

And yet, Kisan Pawar and other farmers are going to cultivate it again this season.

The Maharashtra State Cotton Growers’ Cooperative Marketing Federation pegs the unsold cotton at around 80 lakh quintals, or roughly 25 per cent of the state’s estimated production for 2019-20. Reckoned at the MSP of Rs. 5,500, that’s well above Rs. 4,400 crores of unsold cotton.

Countrywide, the Cotton Association of India, an industry body, estimates production for 2019-2020 to have been around 355 lakh bales (1,775 lakh quintals), and that of Maharashtra’s at 80 lakh bales (400 lakh quintals) on account of higher yields in that year.

In the same year gone by, Vidarbha had about 15 lakh of the state’s 44 lakh hectare area under cotton cultivation – and India as a whole had a staggering 125 lakh hectares.

Govind Vairale. retired general manager of the cotton federation, estimates that at present, at least 30 lakh quintals, worth over Rs. 1,600 crores lie unsold with farmers in Maharashtra.

“Some villages in our vicinity,” Kisan Pawar says, “have large quantities of unsold cotton.” Even more than he does. 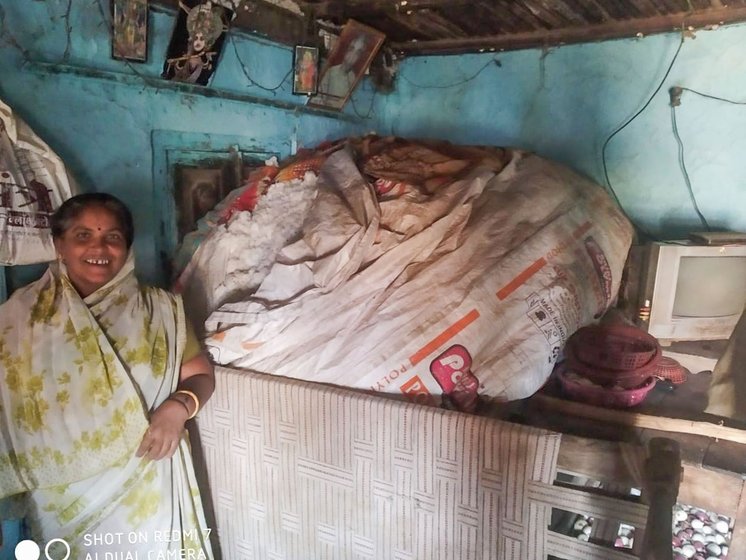 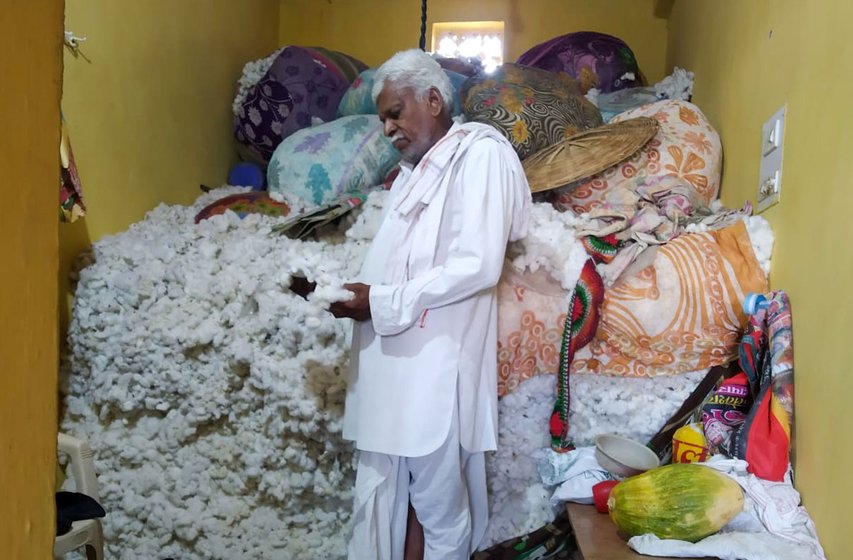 Pawar’s son Kiran registered online a few days ago with the Cotton Corporation of India. “There are 2,000 trucks at the CCI centre in Ghatanji, but they buy about 20 trucks worth a day. Who knows when my turn will come?”

“We are speeding up procurement,” says Anantrao Deshmukh, chairman of the MSCGCMF.

Still, it looks highly improbable that the large quantities of cotton that are with growers will be bought before the monsoon arrives. The cotton procurement season that starts in October every year, technically ends in September the following year. So there’s going to be a further huge pile up of unsold cotton.

And yet, Kisan Pawar and others will swear by cotton this season, too.

“Quintals of cotton lie unsold in our [farmers’] homes,” complains Vaibhav Wankhede, a young farmer in Miniwada village of Nagpur district’s Katol tehsil, over the phone.

“We may grow cotton on fewer acres this year,” says Kisan Pawar, “but we can’t do away with it.”

As the crisis of coronavirus, lockdowns and labour migrations deepens – isn’t there a serious risk of hunger? “There’s no panic,” says Wankhede. “Most people here buy their foodgrain on the PDS and believe it will serve them through any crisis. There is no alternative to cotton in our dryland area. We are worried about prices” – not hunger.

“What alternative crop do they have?” asks Vijay Jawandia, who agrees there are serious risks ahead this season. “Their need for cash is so great, they’re not thinking of a possible food crisis – they take the availability of rice and wheat on the PDS for granted. Jowar, the one food crop they could grow, has no minimum support price and is not on the PDS.  The government should quickly fix an MSP for jowar and also link it to the MGNREGA to encourage its cultivation. The farmers find soybean too risky – untimely rains can destroy the whole harvest in hours. And harvesting it anyway requires availability of labour at a single point in time. With cotton they get an MSP, some guarantee, however risky. It’s price and cash that rules their thinking.”

In Anji village of Ghatanji tehsil, Shyam Nandu Rathod – a relative of Kisan Pawar – has registered himself online with the CCI.  “I won’t get the price I usually get, but a support price is better than selling in distress,” he says. That is, if the CCI procures his cotton.

“There’s a long queue,” he says on the phone, “and no guarantees.”