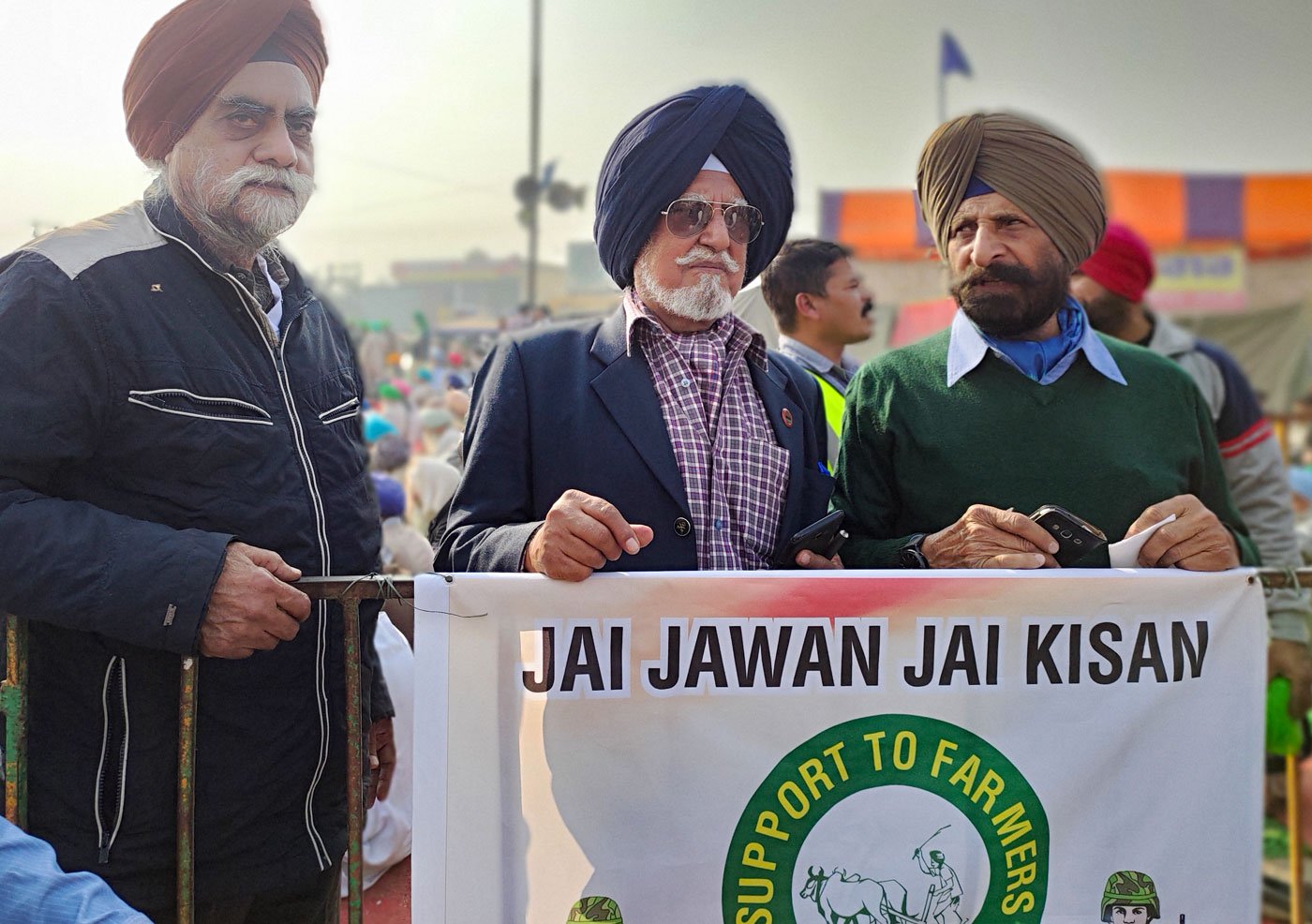 They are farmers, too. They would be lost in the sea of peasantry here, at the gates of Delhi, but for the rows of medals they proudly wear on their chests. They are veterans, decorated for their daring in the 1965 and 1971 wars with Pakistan, some of whom also saw service in Sri Lanka in the 1980s. They’re angry and, obviously, nothing enrages them more than the demonisation of the protestors as ‘anti-nationals’, ‘terrorists’ and ‘Khalistanis’ by the government and powerful sections of the media.

Brigadier S.S. Gill (retd.) from Gill village of Punjab’s Ludhiana district tells me, “It is pathetic that the government used force against peacefully protesting farmers. They wanted to reach Delhi, but the government stopped them, which was rude and wrong. They created barricades, dug roads, lathi -charged them and used water cannons on these farmers. What for? Why? What was the reason to do that? It is due to the farmers’ determination that they have surpassed all those hurdles.”

The 72-year-old war veteran, who won 13 medals in active service, comes from a family of 16 that owns some acres of land in Gill. He served in the 1971 war and in other military actions thereafter, including anti-militancy operations in Punjab in the 1990s.

“The farmers have not asked for, nor were consulted on these laws,” says Brig. Gill. “This is one of the world's biggest revolutions happening right now, at the gates of Delhi. I fail to fathom why the government is not repealing the laws, which it should have done already.”

Lakhs of farmers have been protesting against three farm laws that the central government first issued as ordinances on June 5, 2020, then introduced as farm bills in Parliament on September 14 and rammed them through to become Acts by the 20th of that month. The three laws are: The Farmers’ Produce Trade and Commerce (Promotion and Facilitation) Act, 2020 ; The Farmers (Empowerment and Protection) Agreement on Price Assurance and Farm Services Act, 2020 ; and The Essential Commodities (Amendment) Act, 2020 . 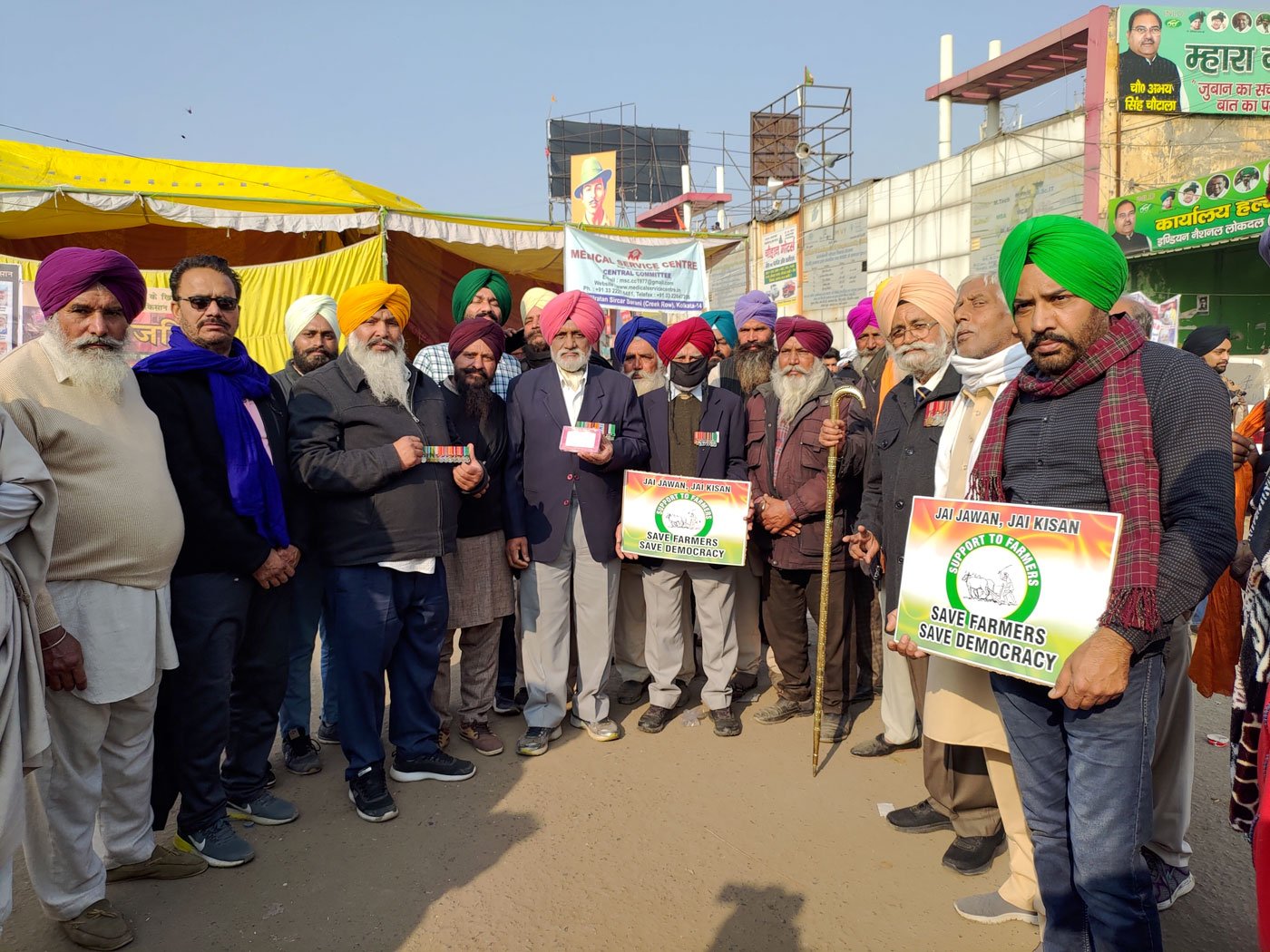 The laws have angered the peasantry, who see them as sacrificing their livelihoods at the altar of corporate profit. The laws have also been criticised as they disable the right to legal recourse of all citizens, undermining Article 32 of the Indian Constitution.

The new laws undercut the main forms of support to the cultivator including the minimum support price, the agricultural produce marketing committees, state procurement and more. At the same time, they vastly expand the space for corporate entities in agriculture while curtailing the already limited bargaining power of the farmer.

“Not only are these wrong steps, the government, in fact, has gone into the pockets of the corporates,” says Lieutenant Colonel Jagdish Singh Brar (retd.) from Ludhiana, Punjab.

And clearly, the name-calling by government and in the media has deeply offended the veterans.

“These business tycoons were nowhere there when we fought wars for this country,” says Lt. Col. Brar, winner of 10 medals in his time in the army. “Neither the Rashtriya Swayamsevak Sangh was there, nor did the Bharatiya Janata Party have any existence or role [in those wars].” The 75-year-old veteran, whose 10-member family owns 11 acres in Khote village, Moga district, fought in the 1965 and 1971 wars.

Many of the retired officers here, at the Singhu, protest site, are no longer active in cultivation, but their identification with the farmer is total. 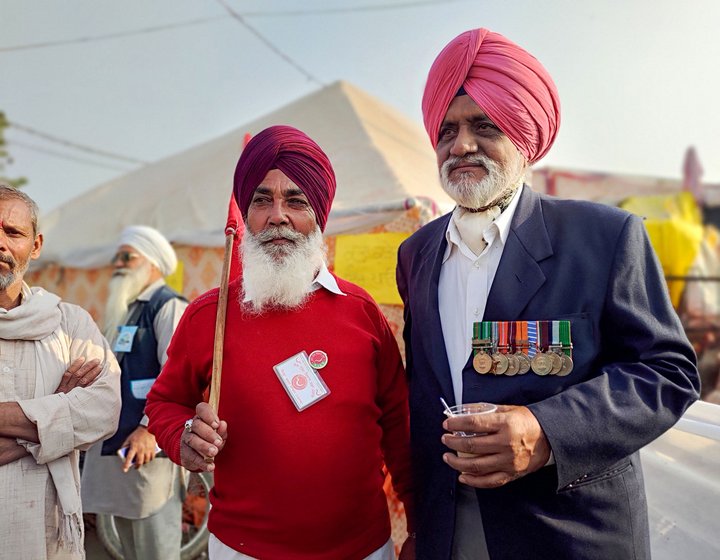 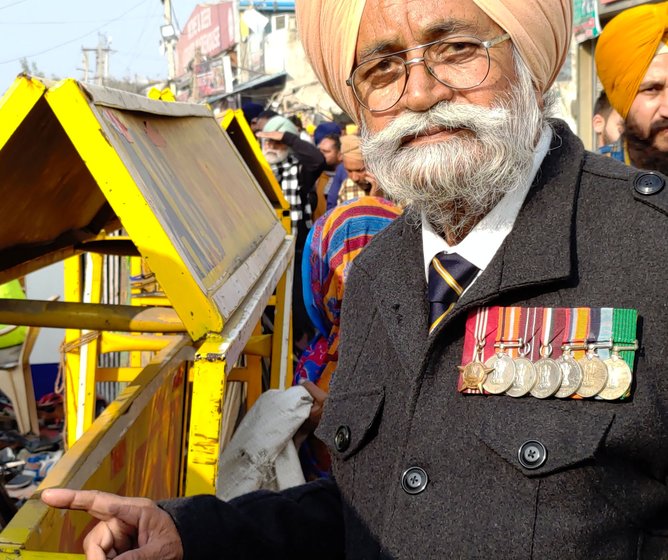 “We are supporting the fighting farmers because we owe them our lives,” says Colonel Bhagwant S. Tatla (retd.) from Mullanpur Dakha village in Ludhiana district, where he owns 5 acres of land. “Because of these farmers, we won two big wars with Pakistan, in 1965 and 1971,” says the 78-year-old medal-winner. Tatla’s record in service saw him rise up the ranks from havildar to colonel.

“You youngsters,” says Lt. Col. Brar, “how would you know! India won these wars just because farmers helped us. In 1965, Pakistan had Patton tanks – then the most beautiful, fastest and latest tanks in the world. We did not have anything; we even lacked bloody shoes. Additionally, the Indian Army did not have trucks or ferries to carry the ammunition. In truth, I tell you, we didn’t have a sufficient force to hold the entire border with Pakistan.”

He explains, “It was in this situation the people of Punjab, the farmers, told us, ‘Do not worry about this. Go ahead, and we will provide you cooked food and take care of your ammunition carriers’. All the trucks of Punjab moved, ferrying ammunition from one place to another, and that is how the army could survive and India won. Same with the 1971 war in East Pakistan, now Bangladesh. If the locals had not helped us, it would have been difficult to win. There also, the locals [on the borders] were again farmers.”Warrant Officer (retd.) Gurtek Singh Virk’s family came in from Gujranwala in Pakistan – known as the city of wrestlers – to Uttar Pradesh’s Pilibhit district, at the time of Partition. His large, extended family of some 18 members owns about 17 acres of land in Puranpur village of that district. His grandfather (under British rule) and his father were both deputy superintendents of police. His brother is a retired director general of police, and Virk himself went into the Indian Air Force. 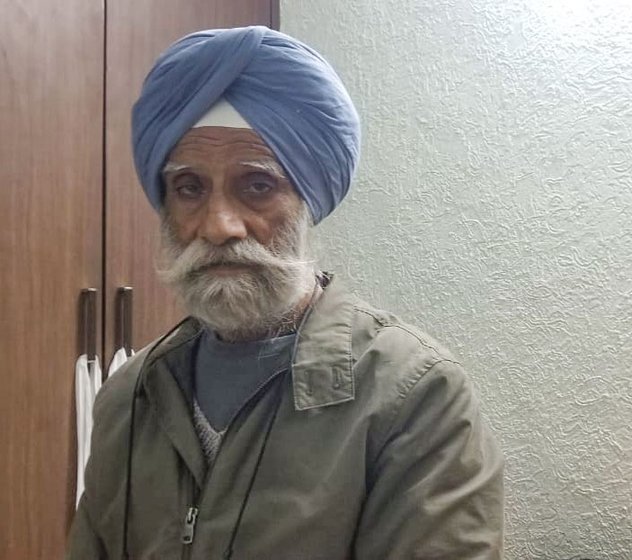 “But our roots are those of farmers and we never forget that,” says the former IAF officer. They were farmers on the other side of the border, too, he points out. “And here we are 70 years later – the Indian government has passed [these] laws which are going to make us landless once again. All because of businessmen who think of no human value, just their own profit.”

“When we fought wars, our parents were on the land, farming. Now our children are at the borders, and we do the farming,” says Colonel Jaswinder Singh Garcha from Ludhiana district. He took part in the 1971 war and has five medals to his name. In his 70s now, Garcha is also an engineer but identifies first with the farmers. He farms in Jassowal village with his son's assistance.

“Now, each day, the government cries that either China or Pakistan is coming into our territories. Who will face their bullets? Will Amit Shah or Modi do that? Not at all. It is our children who shall face that,” says Lt. Col. Brar.

“I had been supporting Narendra Modi,” says Lieutenant Colonel S.S. Sohi, ruefully, “but this step is totally incorrect. The government is ruining farming altogether.” Sohi is president of the Ex-servicemen Grievances Cell, Punjab, a welfare organisation addressing veterans’ problems and aiding the widows of martyred soldiers.

Lt. Col. Sohi fought in the 1965 and 1971 wars. He won 12 medals – including one from the United Nations for his role in emergency and peacekeeping operations. His four-member family held 8 acres of land in Nilokheri village of Haryana’s Karnal district, which he sold some years ago to retire in Mohali, Punjab. 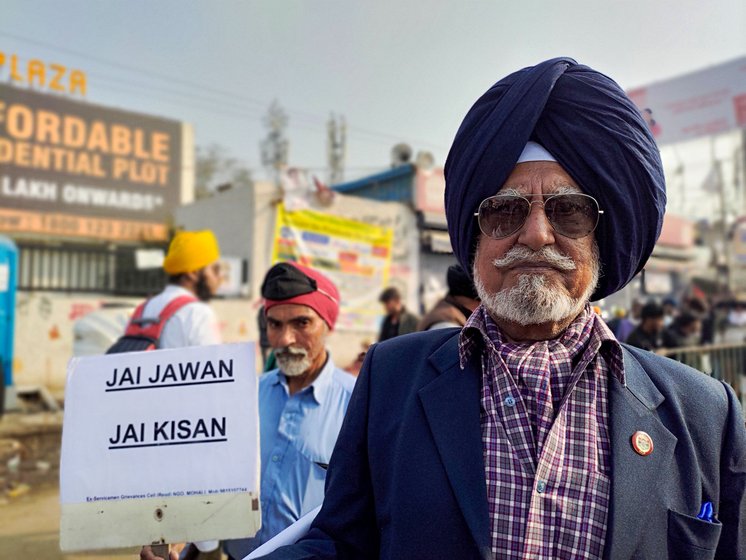 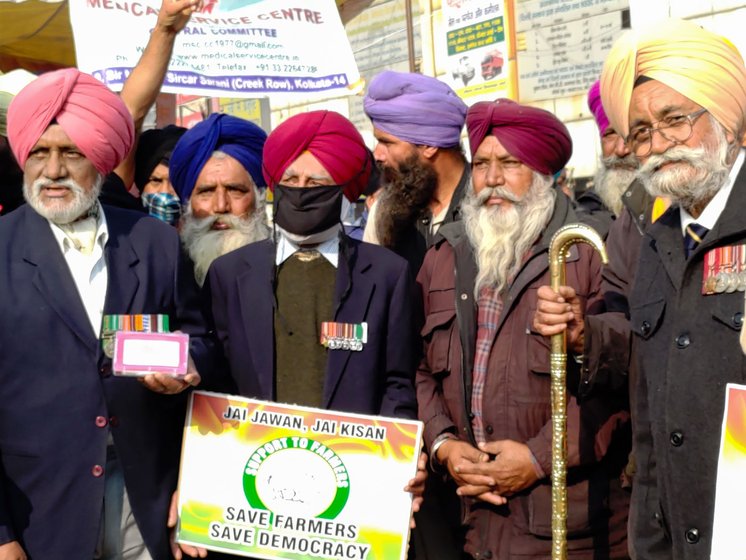 'The government is ruining farming altogether', says Lt. Col. S. S. Sohi (left). The war heroes are angry about the demonisation of farmers

He believes, “Politicians have taken so much from the corporates and fought elections on that money. Now they want to pay them back in the shape of these laws.” What is sad, he says, is that “India’s main rulers are from the business community. Hence, they are concerned only for the business families.”

“The corporates don’t want anyone to speak against them,” says Lt. Col. Brar. “And the prime minister is fooling you when he says the laws are for the betterment of the farmers. I would give you the example of Bihar. That poor state scrapped the mandi system 14 years ago [with terrible consequences].” He adds, “I have given our 11 acres of land in my village to my brother to cultivate. I am unable to do farming any longer because of my age.”

“Farmers owning 10 acres of land in their own state come to work as farm labourers for a cultivator owning 5 acres in Punjab,” points out Lt. Col. Brar. “What could be more shameful than making landowning farmers beg? Making them landless,” which, he asserts, will be the result of these laws.

Could that actually happen, I asked Professor Jagmohan Singh, chairperson of All-India Forum for Right to Education and of the Shahid Bhagat Singh Creativity Center in Ludhiana. “Yes, this is our future if the laws are not repealed. Wherever the corporates’ interests increase, they push farmers out of their land. One of the leading examples is Brazil, where, in the 1980s, farmers started a huge agitation against such land grab,” he told me. 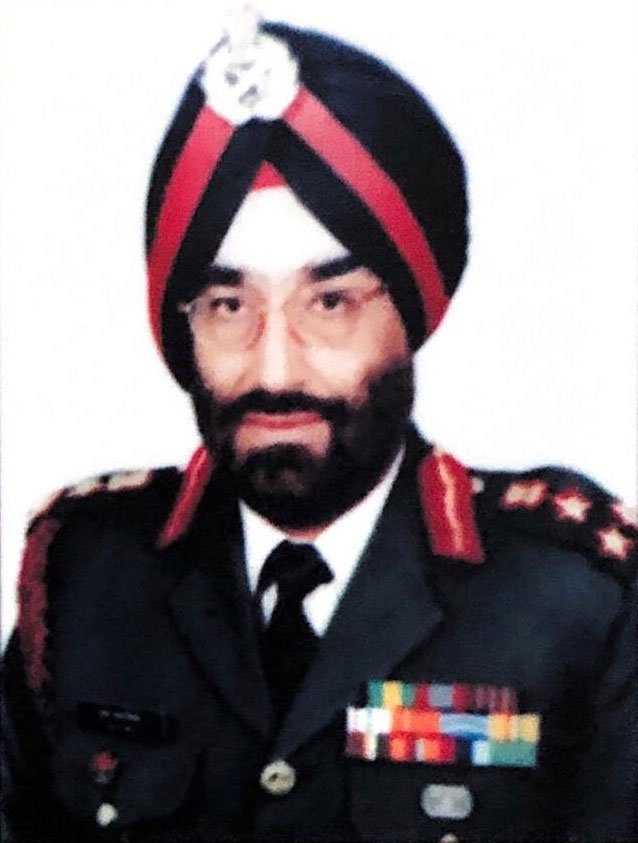 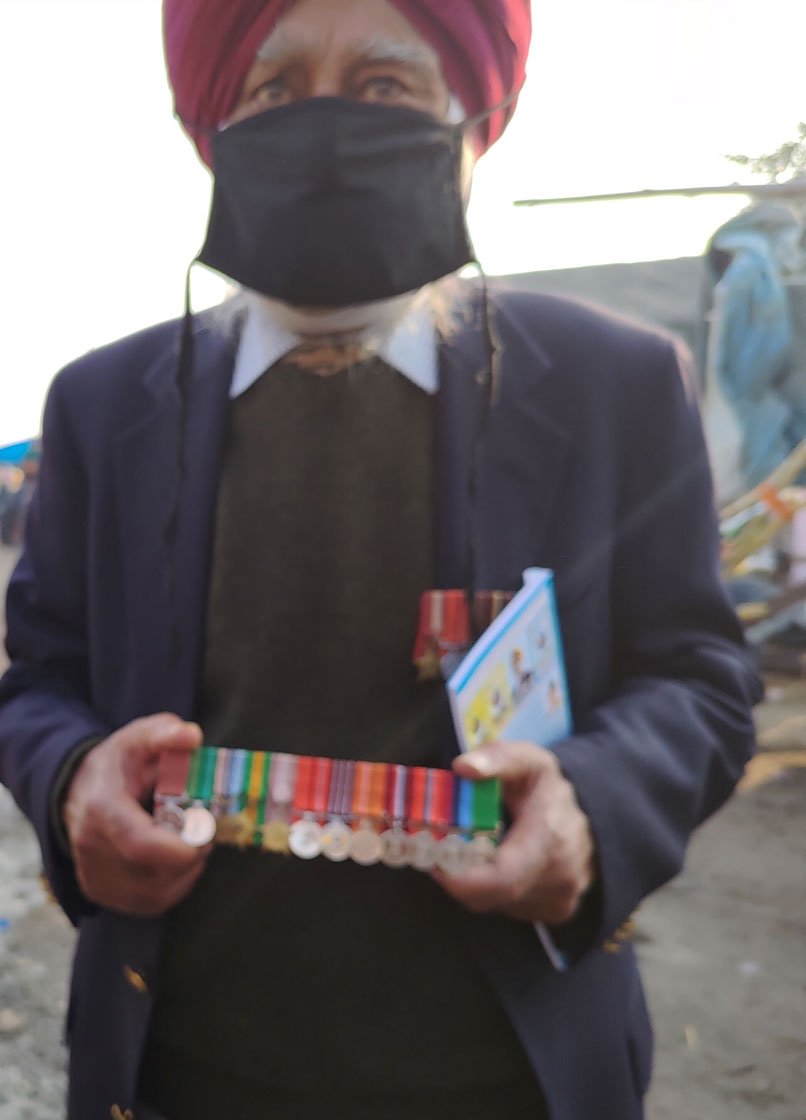 “The government is trying to divide us by bringing fictitious farmers out of the blue, who say ‘we support these laws’. I don’t know if any farmer can actually support them,” says Brig. Gill.

Lt. Col. Brar adds, “The government may also try to pit the people of Haryana and Punjab against each other using the old water dispute between them. But people in both states are smart enough to understand that if there is no land, what would be the use of the water here?”

These veterans and war heroes have between them won over 50 medals for their role in defending the country. Medals they now intend to return to the President of India – the supreme commander of the armed forces – if the government remains adamant and uncaring.

“I only wish and pray that good sense prevails upon the government and they send the farmers back home, by repealing the laws,” says Brig. Gill. “That would be the end of it.”
#new-farm-laws #Delhi-Haryana-border #armed-forces #farmer-protests #war-veterans #mandi-system #minimum-support-price
Amir Malik

Amir Malik is an independent journalist. He tweets at @_amirmalik.