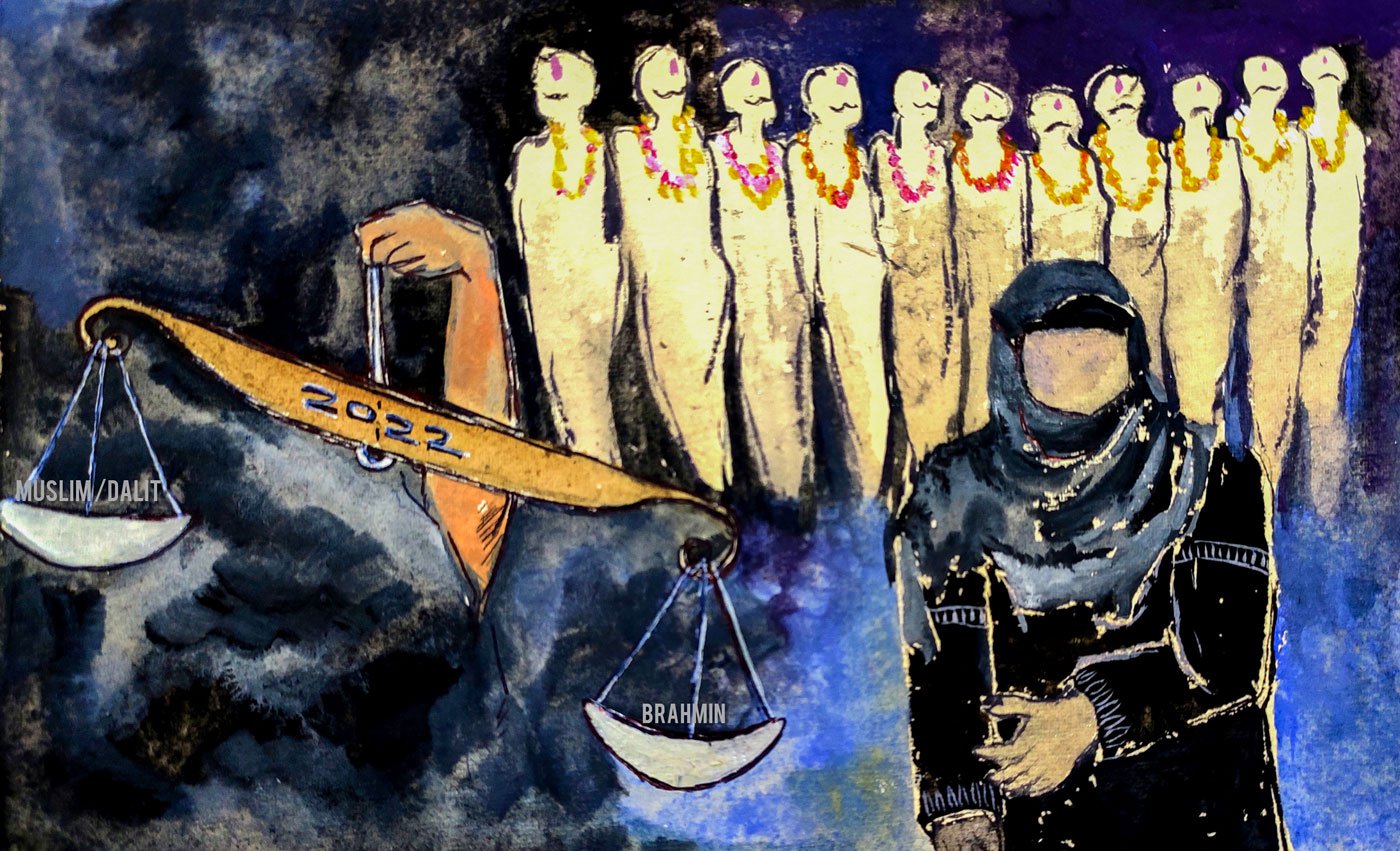 The ends of justice: a case of Bilkis Bano

A lone woman’s painful struggle for justice, and the recent remission granted to 11 convicts who had assaulted her during the 2002 Gujarat riots, sits, disturbingly, at the centre of this poem

How can justice for any woman end like this?

In March 2002, Bilkis Yakub Rasool, 19, was brutally raped by a mob that also killed 14 members of her family – including her three-year-old daughter Saleha – in Gujarat’s Dahod district. Bilkis was five months pregnant at the time.

The men who assaulted her family that day – in Randhikpur village of Limkheda taluka – were from her village. She knew them all.

The case was probed by the Central Bureau of Investigation on the Supreme Court’s direction in December 2003; the accused were arrested a month later. In August 2004, the Supreme Court transferred the trial to Mumbai, where, in January 2008, a special CBI court found 13 of the 20 accused guilty. Of them, 11 were given life sentences.

In May 2017, the Bombay High Court upheld the life imprisonment of all 11 serving their sentences and quashed the acquittal of the seven accused who were let off.

Over five years later, on August 15, 2022, remission was granted to the 11 life convicts, based on the recommendation of a jail advisory committee set up by Gujarat government.

Several experts have raised questions about the legality of their release. Here, the poet speaks to Bilkis, giving voice to his own anguish.

Be my name, Bilkis

What’s it in your name, Bilkis?
It burns a hole in my poem,
its fortified ears bleed.

What’s it in your name, Bilkis?
It paralyses the loose tongue,
it freezes mid-speech.

Dazzling suns of grief in your eyes
blind every single image
I conjure of your pain,

that scorching endless desert of pilgrimage.
Whirling seas of memories,
dammed in that still searing gaze,

dry up every single value I uphold,
and smash this sham of civilization
– a house of cards, a lie well-sold.

What is it in your name, Bilkis
that splashes inkpots
in the sunflowery face of poetic justice?

Soaked in your breathing blood,
this shamed earth will blast one day,
like Saleha’s soft, cracking skull.

The hill you climbed
with just a petticoat on
will probably remain denuded,

without a blade of grass, for eons
and every wind to sweep this land
will sough the curse of impotence.

What’s it in your name, Bilkis
that my phallic pen
pauses mid-way

the long arc of universe
and breaks its moral nib?
This poem too, most likely,

will become worthless,
– a dead mercy policy, a shady legal affair –
unless you touch it to life, breathe courage.

Give it your name, Bilkis.
Not just a name, be a verb,
to my senile, sullen subjects, Bilkis.

And complement my language limp
with supple, sinuous figures of speech.
A metaphor for fortitude,

A metonym for freedom, Bilkis.
An assonance of justice,
An antithesis of revenge, Bilkis.

And grant it your vision, Bilkis.
Let the night flowing from you
be collyrium to its eyes, Bilkis.

Bilkis its rhyme, Bilkis its chime,
Bilkis a song in its heart sublime,
let this poem break the page-cage,

under its wing, heal and spill
all that’s in your name Bilkis.
Pray! This once, be my name, Bilkis.

Hemang Ashwinkumar is a poet, fiction writer, translator, editor and critic. He works in Gujarati and English. His English translations include Poetic Refractions (2012), Thirsty Fish and other Stories (2013), and a Gujarati novel Vultures (2022). He has also translated Arun Kolatkar’s Kala Ghoda Poems (2020), Sarpa Satra (2021) and Jejuri (2021) into Gujarati.