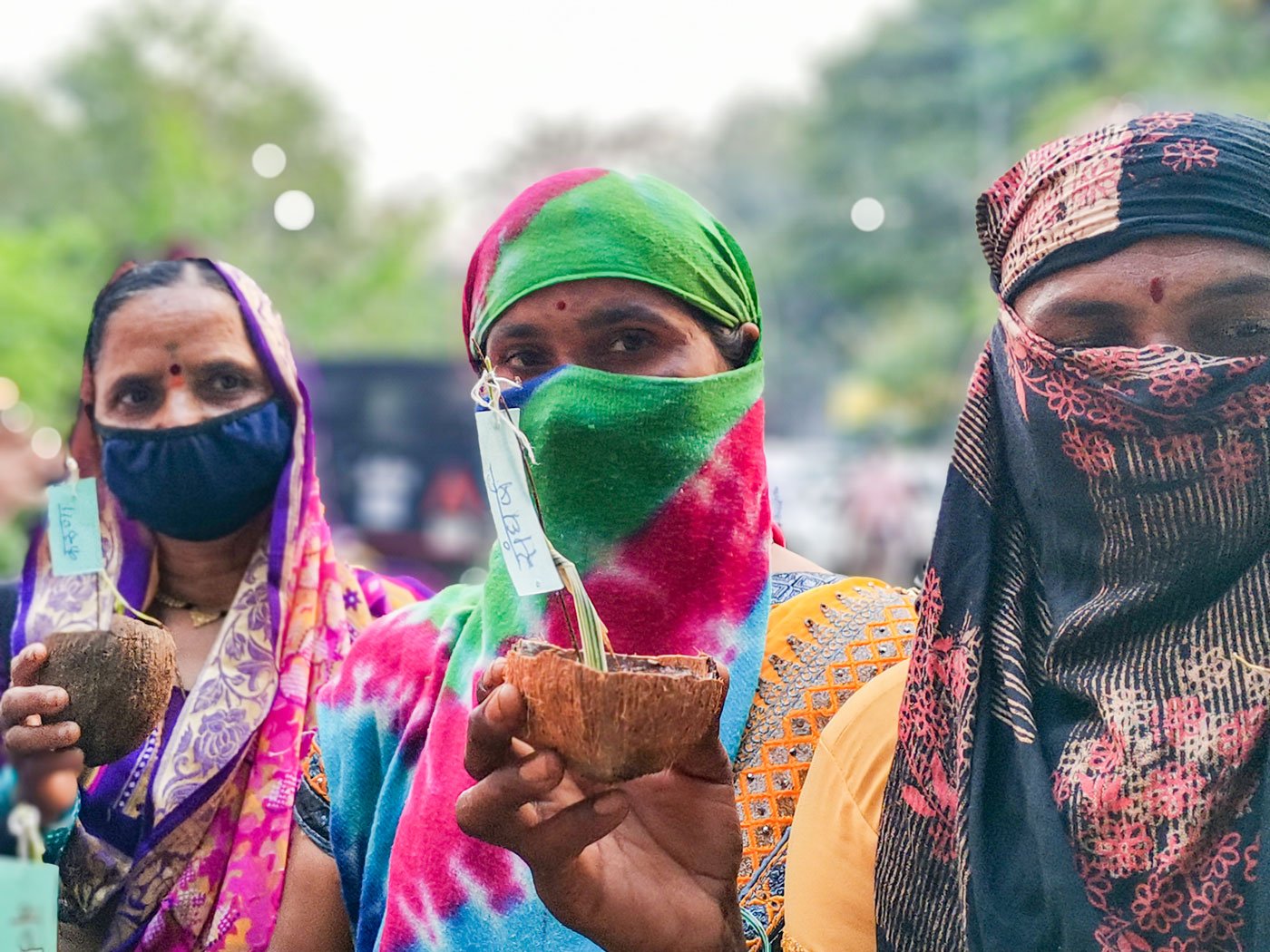 Women are central to agriculture in India, but are rarely recognised as farmers – many of them came together in Pune last week supporting the call to scrap the new farm laws and voiced other demands

“We work, so you get to eat,” said Krishnabai Karle, a farmer from Khed tahsil of Pune district. It was meant to be a stinging reminder to the government. Krishnabai is one of innumerable farmers demanding the unconditional withdrawal of the three new farm laws passed by the centre in September this year. She spoke at a meeting on December 11 in Pune, in support of the ongoing farmers’ protests in the country.

Farmers, farm labourers and activists from across the district – all women – had gathered in Pune city to highlight the impact of the new legislation on farmers and especially on women in agriculture.

Although women contribute significantly to agriculture in India – at least 65.1 per cent of women workers work in agriculture, either as cultivators or agricultural labourers (Census 2011) – they aren’t regarded as farmers and are often denied ownership of their family land. The farmers at the Pune meeting said that the union government must recognise women as farmers rather than impose laws that further threaten their livelihood. “Women not only work but they work longer hours than men,” said Asha Aatole, a farmer from Daund tahsil .

The December 11 meeting – held on the 16th day of the nationwide farmers’ protests – came together as 'Kisan Baug', a forum launched on December 8 to demand repeal of the new laws. The meeting was organised by the Stree Mukti Aandolan Sampark Samiti, a 41-year-old collective of women’s organisations in Maharashtra.

Expressing their solidarity with the protests, the farmers also reiterated their long-pending demands such as a lack of access to credit and marketing facilities.

In a list of demands announced at the meeting, they said that the defamation of farmers by calling them ‘anti-nationals’ must stop. They also demanded that the government implement the recommendations of the National Commission on Farmers (or the Swaminathan Commission) of a minimum support price (MSP) for crops and decentralised purchase facilities. 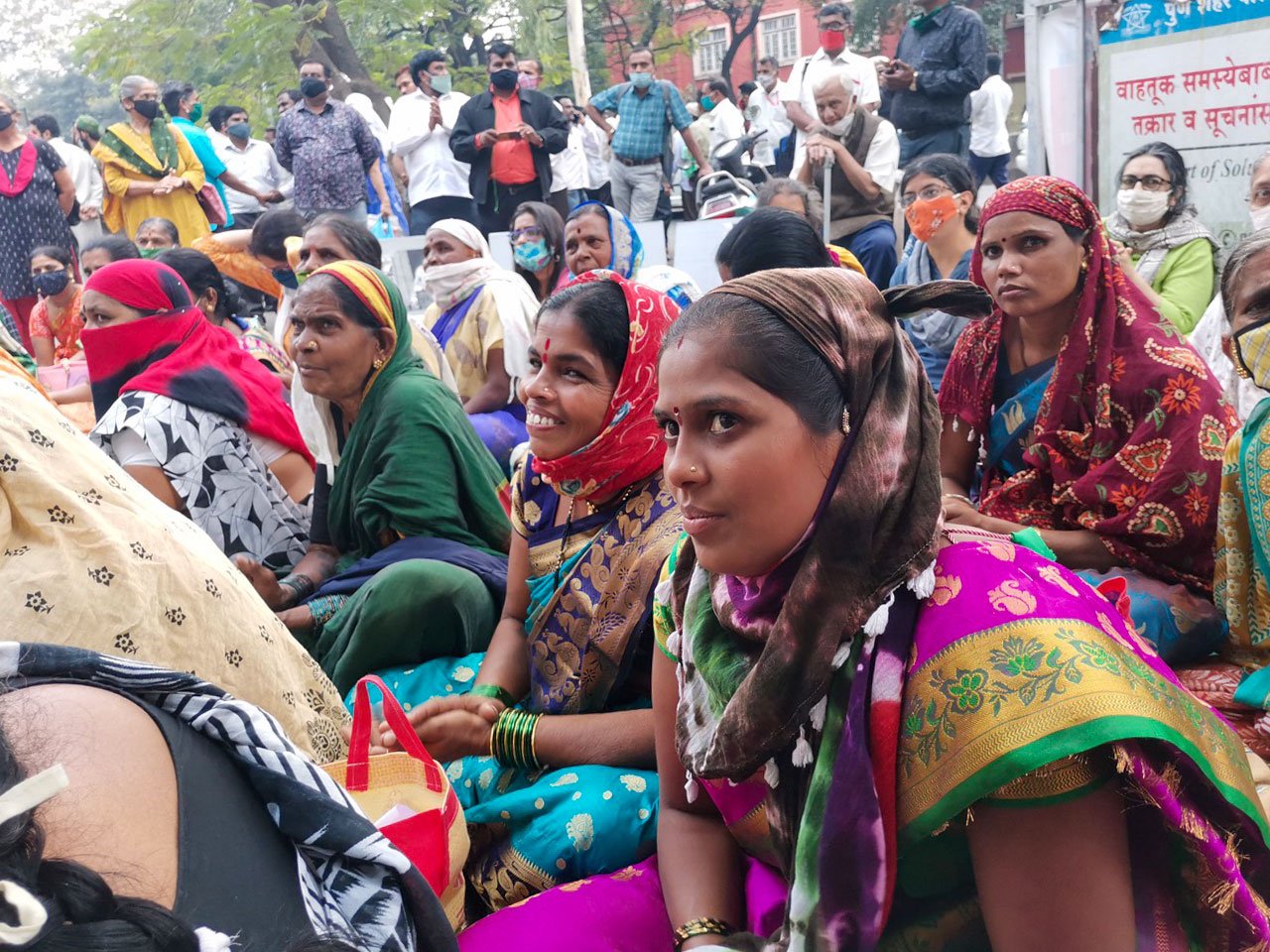 Women farmers from various parts of Pune district attended the Kisan Baug protest near the collector’s office in Pune on December 11, in support of the nationwide farmers’ movement and its demand for a repeal of the new farm laws. 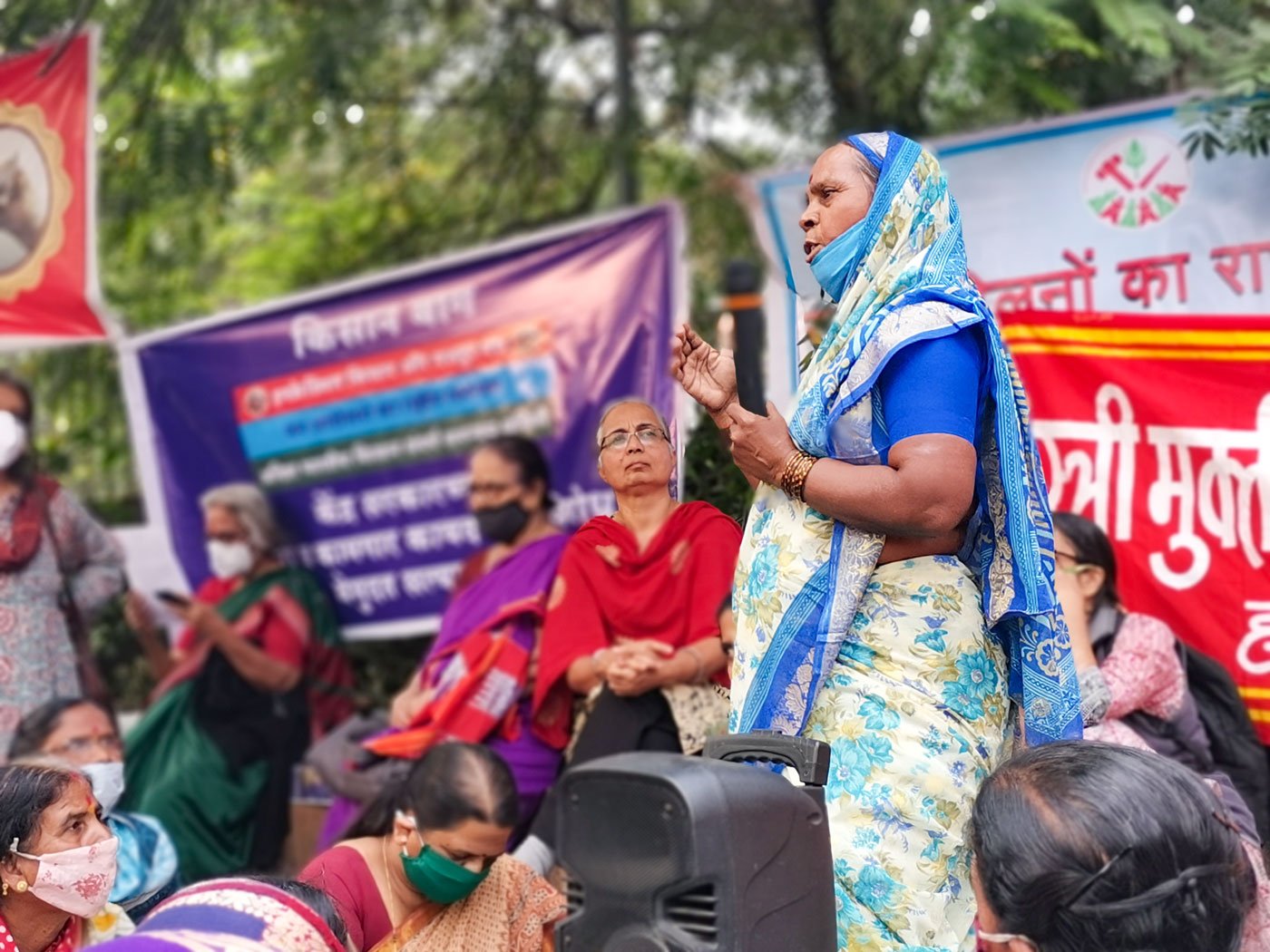 “It was the farmers who worked even during the lockdown. They grew the vegetables and food grains that were delivered to your doorstep, when you were safe and comfortable at home,” said Krishnabai Karle from Khed tahsil . 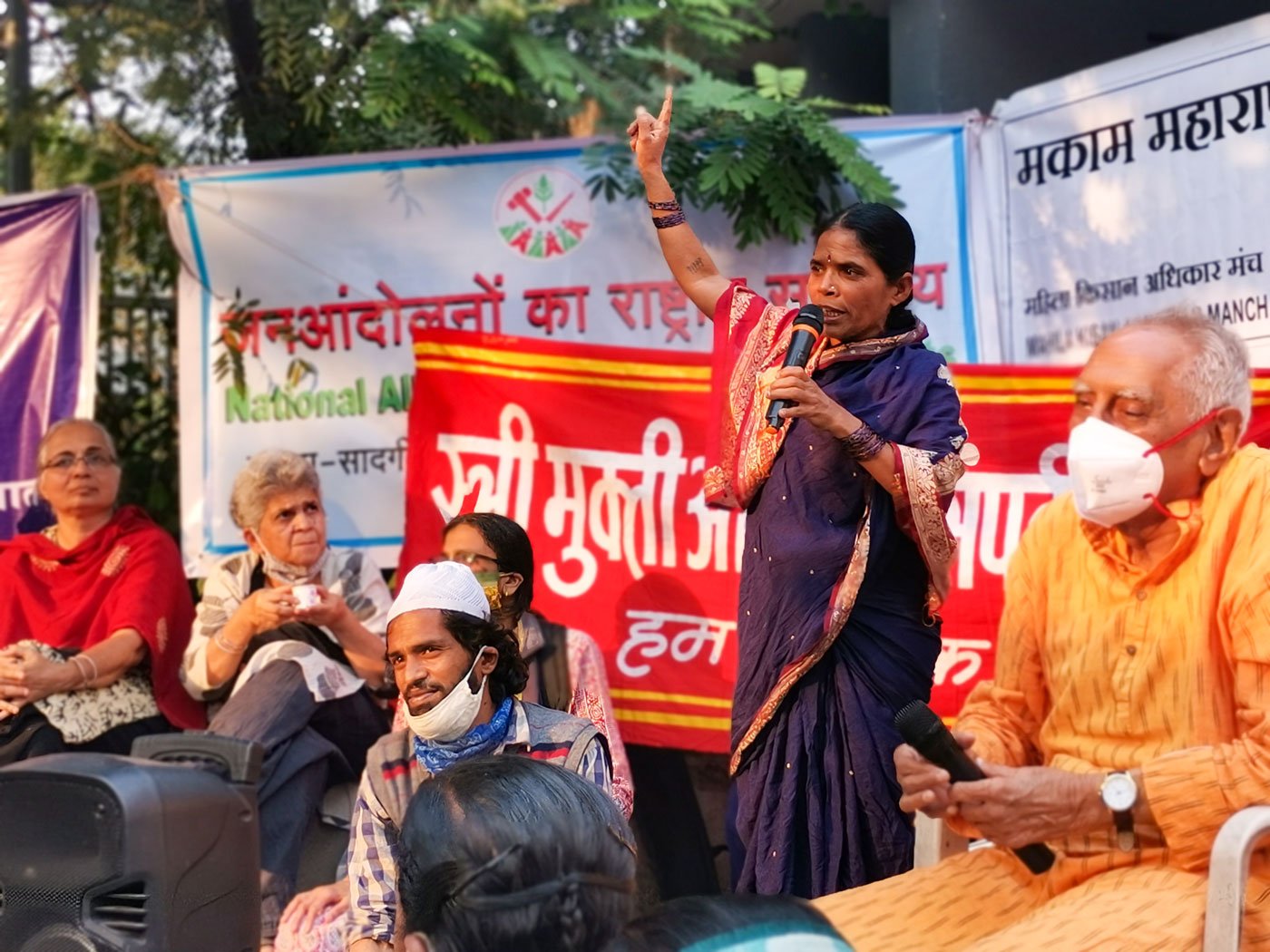 Shantabai Varve from Tikona village in Mawal tahsil is a subsistence farmer. “The Pavana dam was built in our area by taking away our lands. But the water from there goes to factories in Chinchwad. With no irrigation, we are left to do rain-fed farming,” she said. 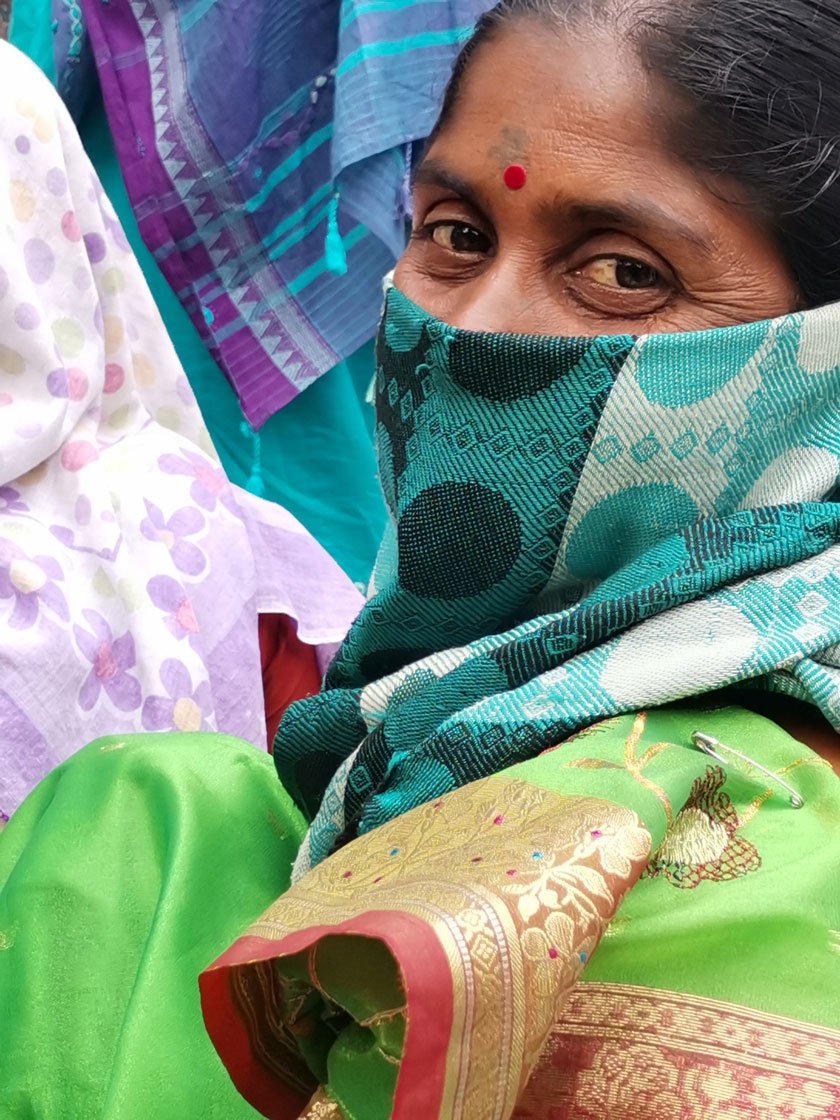 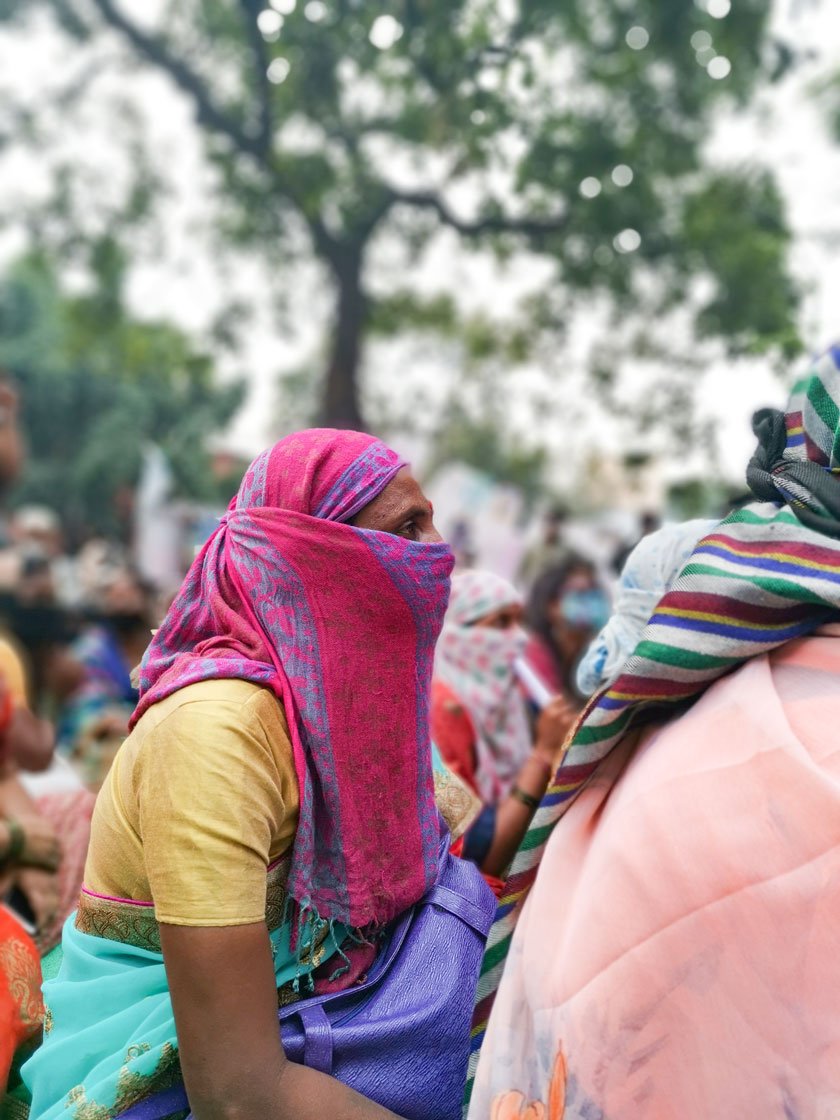 Women are central to all processes in a griculture, from preparing the land to processing the harvest, and contribute significantly to food production with barely any support. At the meeting, they pressed for full implementation of 30 per cent representation of women in Agricultural Produce Market Committees (APMCs), and incentives like low-interest credit. 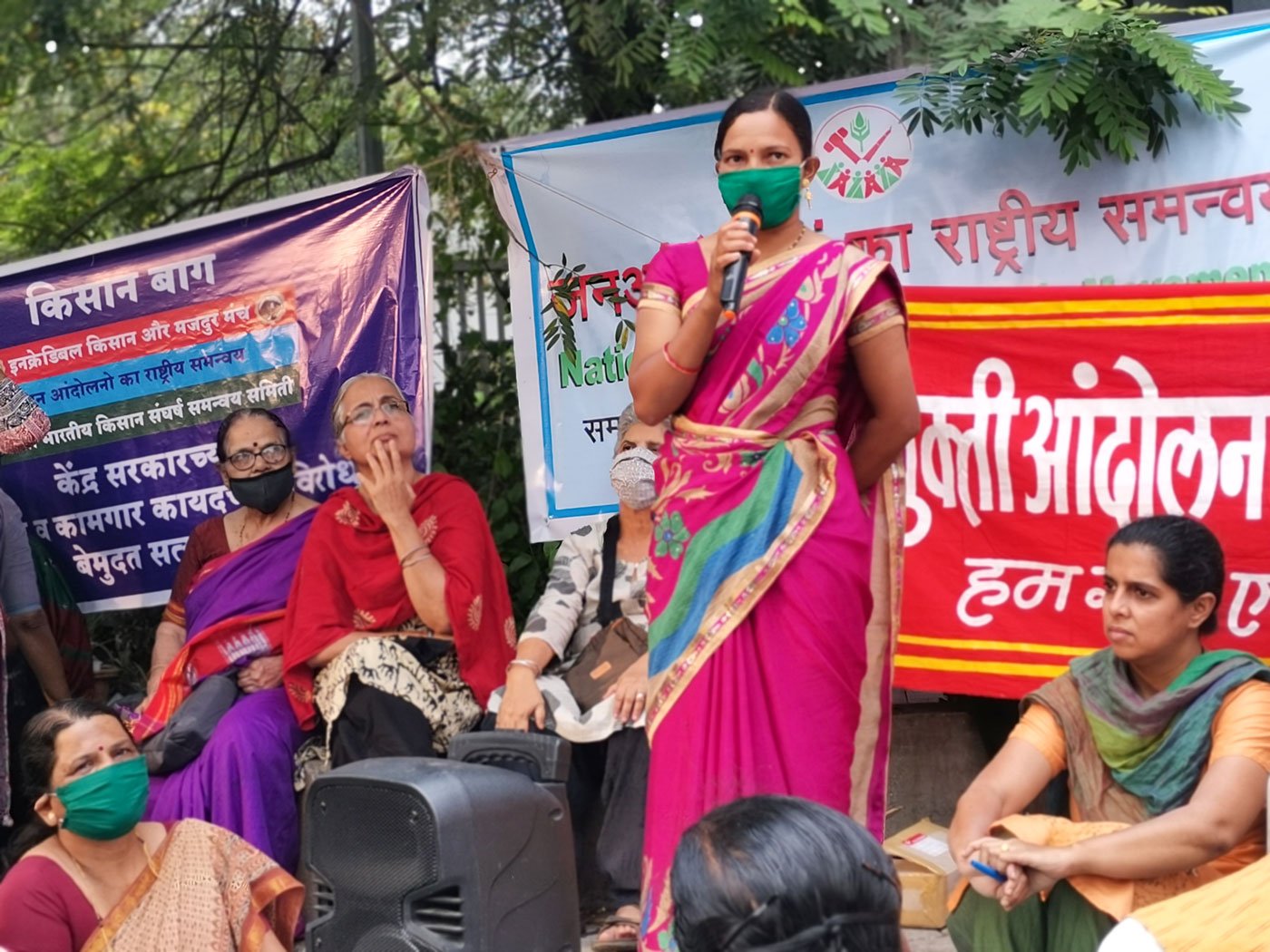 Farmers and farm labourers are all united against the new laws, said Madhuri Karode, deputy sarpanch of Manakeshwar village in Junnar tahsil and member of the All India Kisan Sabha. “During the lockdown farm labourers were jobless, so we got them work through MGNREGA,” she said. 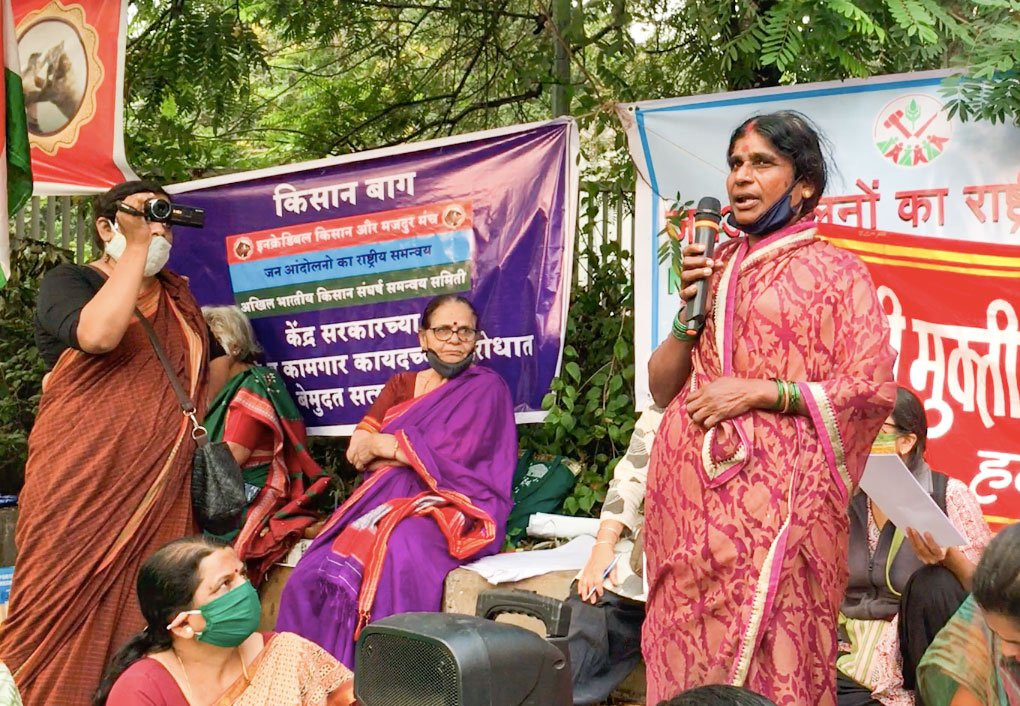 “Women farmers don’t want the new laws. We want our right to decide. We will fight until we get our rights,” said Asha Aatole, a farmer from Daund tahsil. 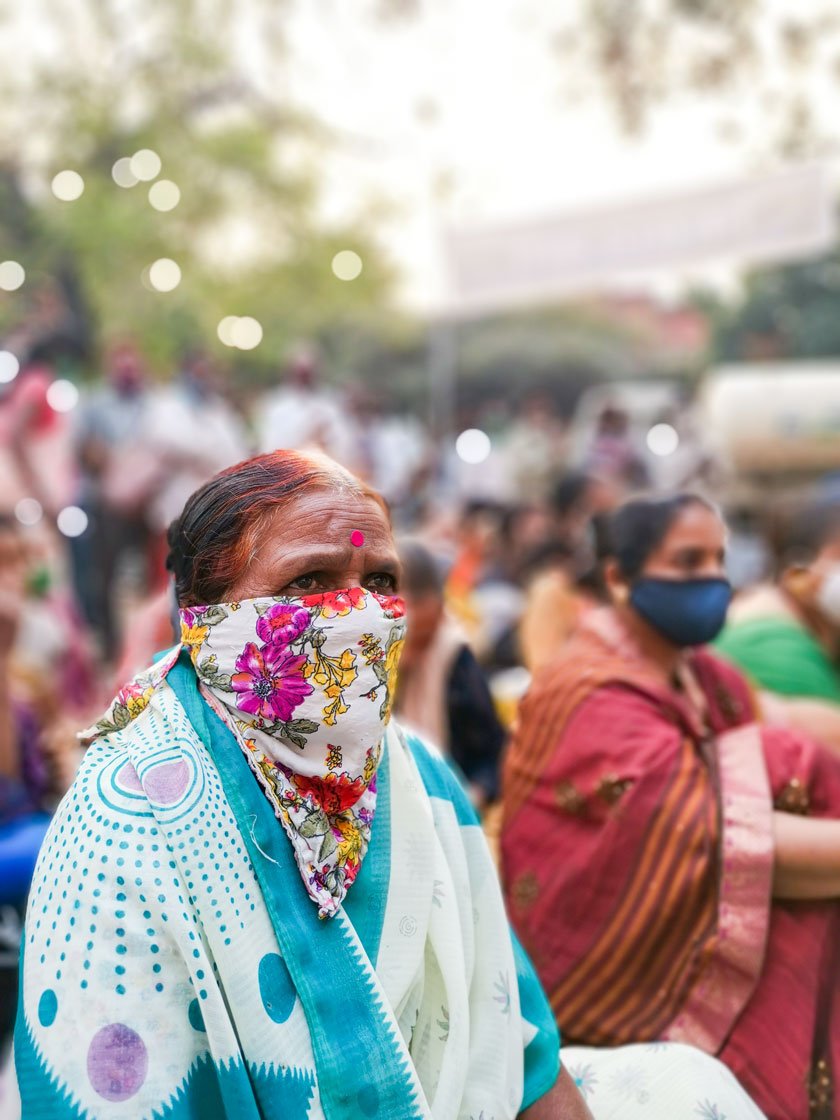 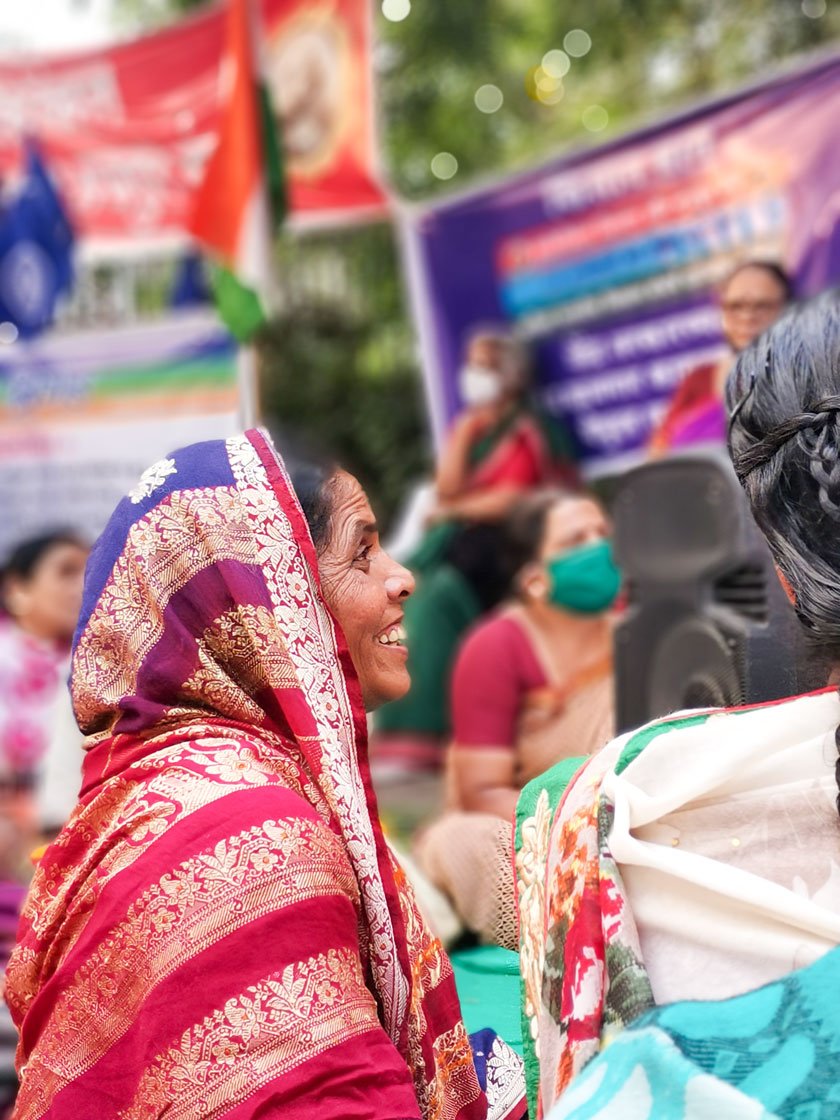 Loan waivers for women in suicide-impacted families was one of the demands voiced at the protest. The farmers also highlighted the need for a strong and universal public distribution system (PDS). 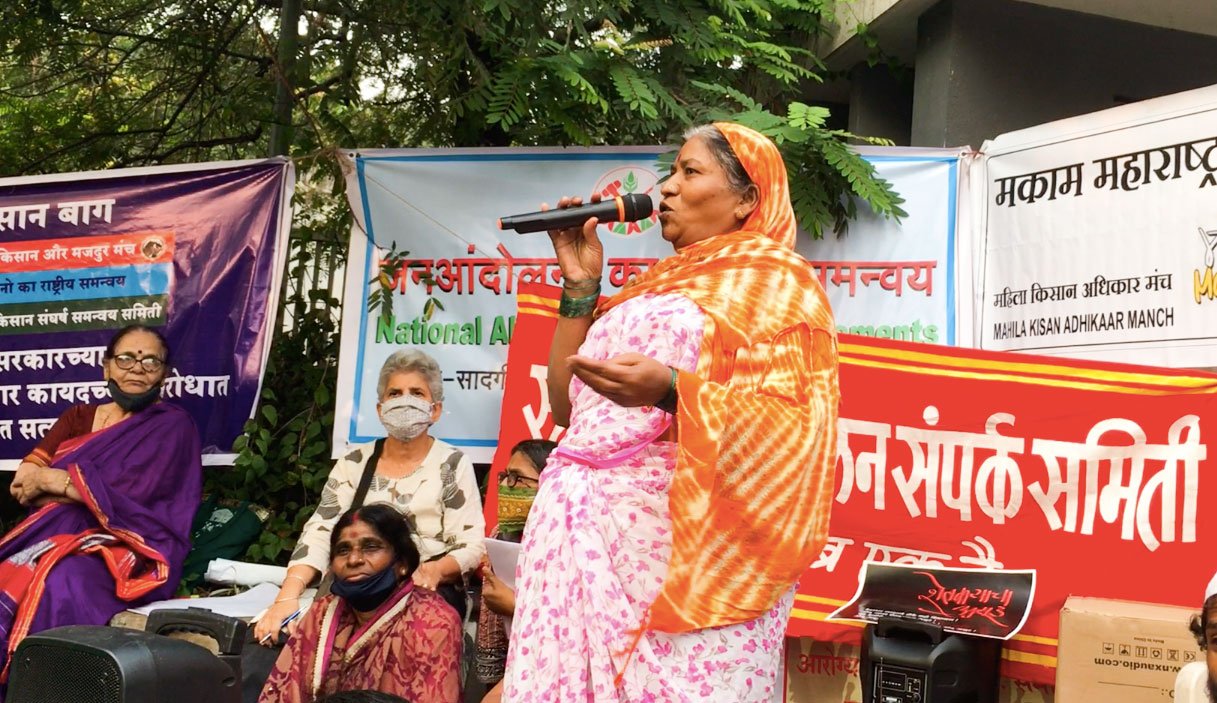 “Workers like me will become jobless if the present markets close. What will we do for survival then?” asked Suman Gaikwad. She works as a headloader at Pune’s Market Yard, the city’s wholesale market for farm produce and grains. 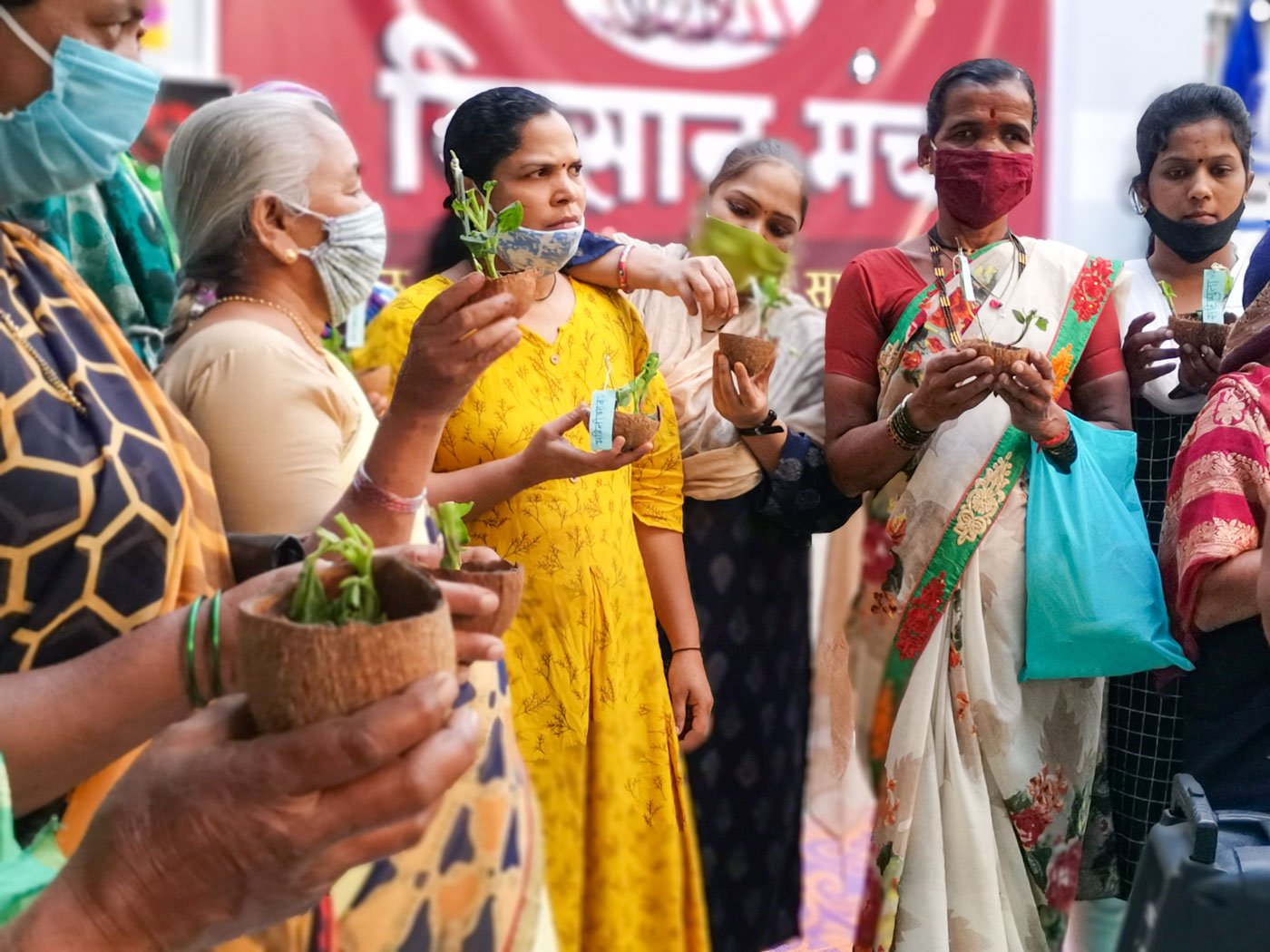 The farmers pledged their support for ecologically sustainable agriculture focussed on food grains. They expressed their solidarity with the protests by planting seeds and seedlings in small containers and then taking them home.

Vidya Kulkarni is an independent writer and photographer based in Pune. She covers women’s rights issues.

Other stories by Vidya Kulkarni