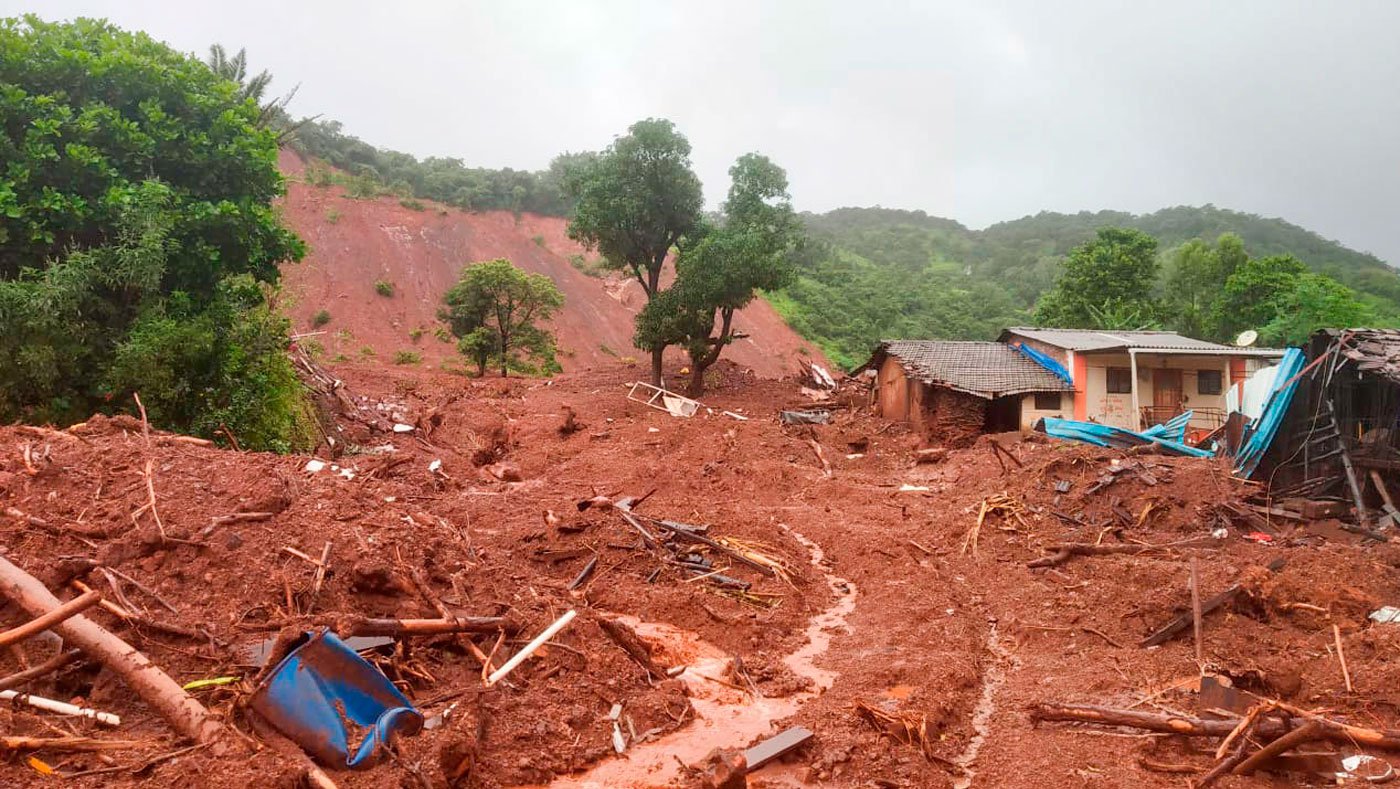 When the mountain crashed down on Mirgaon

Many weeks after a landslide flattened their village, the people of Mirgaon in Maharashtra are still staying in a local school. This is their third displacement – the first was by the Koyna Dam – and they are exhausted

The entire mountainside came sliding down that night.

It was around 11 p.m., and Anita Bakade was sleeping, as was everyone else in her 17-member joint family, in a cluster of 4-5 adjacent houses. “We woke up because of a loud rumbling sound, and immediately realised what was happening,” she says. “We started running out in the dark. By then the houses next to ours had all collapsed.”

Anita’s house escaped the landslide that hit her village, Mirgaon, which is situated amid the Sahyadri range in Patan taluka of Maharashtra’s Satara district. But she lost 11 members of her joint farming family on the night of July 22 this year. The youngest was seven-year-old Yuvraj, a nephew, the oldest was 80-year-old Yashoda Bakade, a distant relative.

By the next morning, disaster rescue teams arrived, and by noon 43-year-old Anita and others in the village were shifted to the zilla parishad (ZP) school in Koynanagar village, around six kilometres away – Mirgaon is roughly five kilometres from the huge Koyna Dam and hydroelectric project. 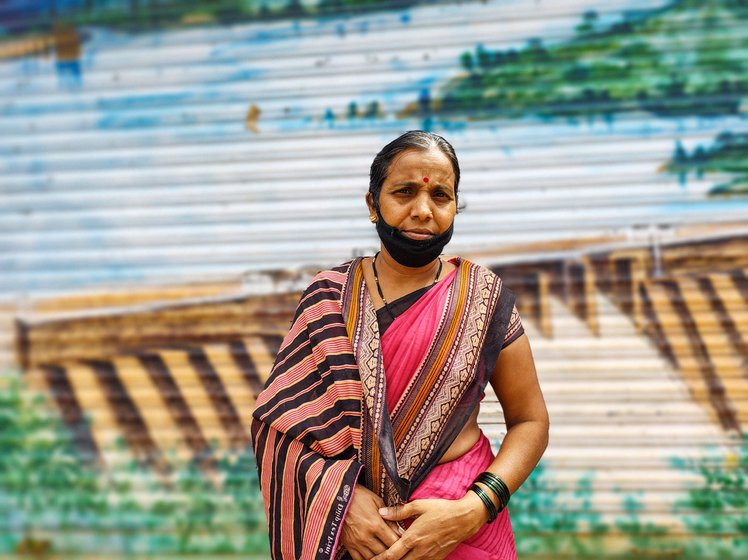 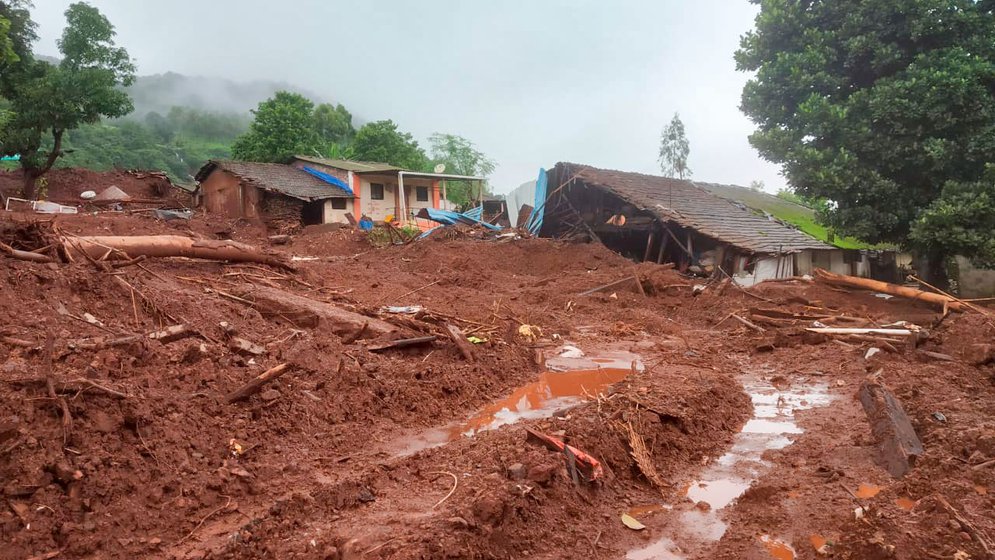 Anita’s house escaped the landslide that hit her village Mirgaon on July 22, but she lost 11 members of her joint family

“We had started evacuating people from 7 p.m. [on July 22] after a minor landslide at 4 p.m., and we thought that was it. But at 11 p.m. this bhayanak [horrific] incident happened and in a matter of seconds our entire village was destroyed,” says Sunil Shelar, the police patil (constable) of the village.

Mirgaon’s 285 residents (Census 2011) – of whom 11 were killed by the landslide – are used to intense rainfall and minor landslides. But the July 22 events were unprecedented, they say. Several news reports speak of a record 746 mm in the Koyna catchment area that day – that week, various parts of Maharashtra saw major floods.

“It started raining from the afternoon of July 21,” says Jayashri Sapkal, 45, speaking to me at the ZP school. “We were not worried, because at this time of the year heavy rainfall is common. But at 11 the next night we woke up to a very loud noise. Within minutes, the mountain came down crashing on our village. We were fortunate that we could run away to a nearby temple."

“Some villagers came running to our house saying that the mountain had collapsed,” adds 21-year-old Komal Shelar. “We did not think for a second and left our house. There was no light, we could not see anything as we made our way through mud and waist-level water and managed to reach the temple where we spent the night." 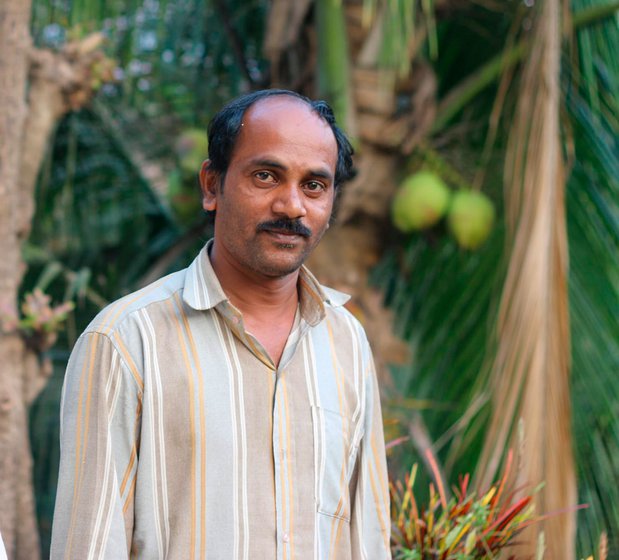 Neera and Lilabai Sapkal (inside) at the school. Uttam Shelar (right): 'There are cracks in the mountains in the Koyna area. We live under constant threat'

Besides damaging houses and claiming lives, the rain and landslide destroyed farms and crops too. “I had sowed paddy just a few days before the incident and was hoping for a good yield this season,” says 46-year-old Ravindra Sapkal, whose joint family lost 12 houses. “But my entire farmland is gone. There is mud everywhere. I don’t know what I will do now, my entire family was dependent on paddy.”

For Mirgaon’s older residents, the move to the ZP school is a third round of displacement. The first time was during the construction of the Koyna Dam in the early 1960s. The families moved to a higher location, and the original Mirgaon was eventually submerged. Then, on December 11, 1967, a severe earthquake hit the Koyna area and people from nearby villages were shifted to rescue camps, as were those who were in the ‘new’ Mirgaon – and they later moved back to the same location where the July 22 landslide occurred this year.

"The government had promised us farmland and jobs when the dam was being built,” says 42-year-old Uttam Shelar. “It's been over 40 years, but we haven't received anything. If you go through the Koyna area, you will see huge cracks in the mountains, and these mountains will come down in the next rains. We live under constant threat.” 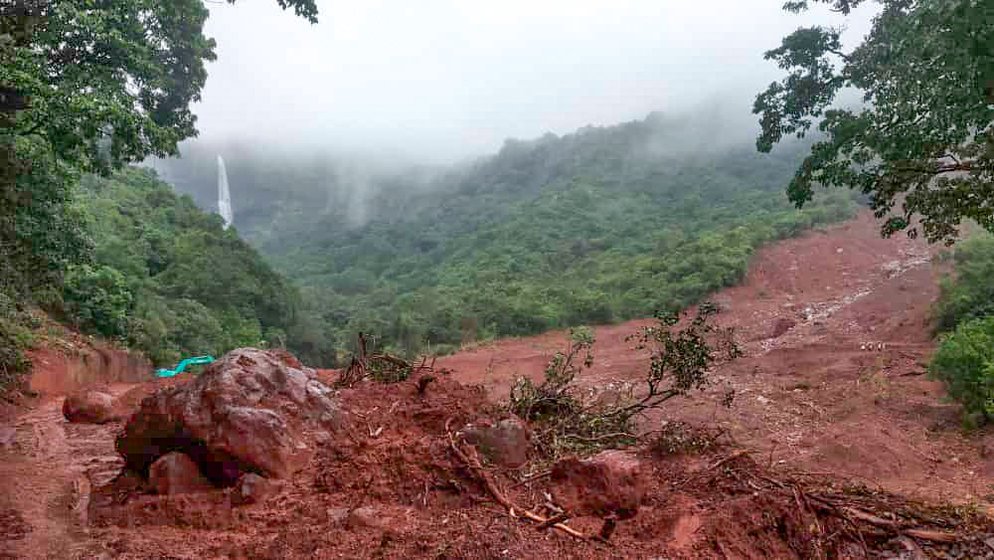 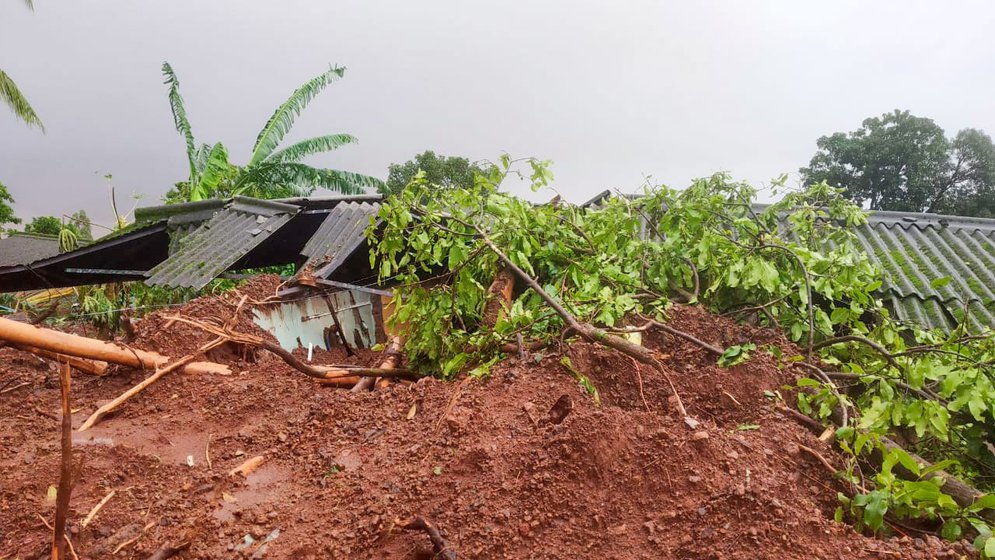 Beside damaging houses and claiming lives, the rain and landslide destroyed Mirgaon's farmlands and crops too

On July 23, news reports note, the state government announced a compensation amount of Rs. 5 lakhs each to the families of those killed in landslides in various parts of Maharashtra. Anita Bakade’s family has received this amount. The central government also announced a sum of Rs. 2 lakhs, which the Bakade family is still awaiting.

But so far no relief package has been declared for people who have lost their farmland or houses in the landslide.

“The revenue department made us fill a form [for compensation, on August 2] but nothing has been announced yet,” says 25-year-old Ganesh Shelar, while showing me the mud and debris that cover his entire farmland. Ganesh moved back to his village to help his family with paddy farming after leaving his job as a mechanical engineer in Navi Mumbai because of the Covid-19 pandemic. He stops midway, trying to hold back his tears. “We lost our entire 10-acre farmland, our entire crop is gone. I doubt that we will get anything for this from the government.”

Meanwhile, many weeks after the landslide, the surviving residents of Mirgaon remain in the ZP school, depending on foodgrains and other material provided by the government and various NGOs. And all of them are now desperate for proper and permanent rehabilitation. “Our village is gone. Our demand now is to be rehabilitated to a safer place,” says police patil Sunil Shelar. 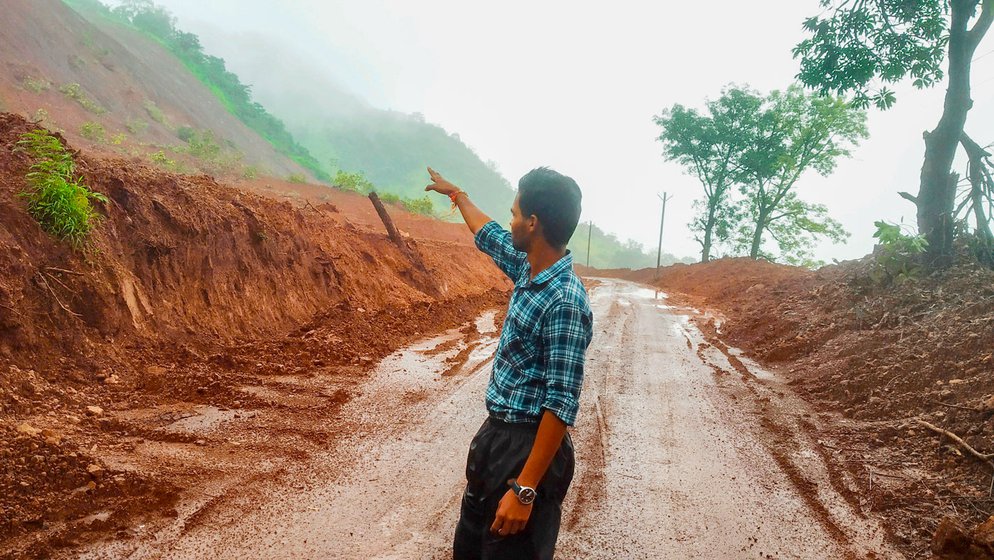 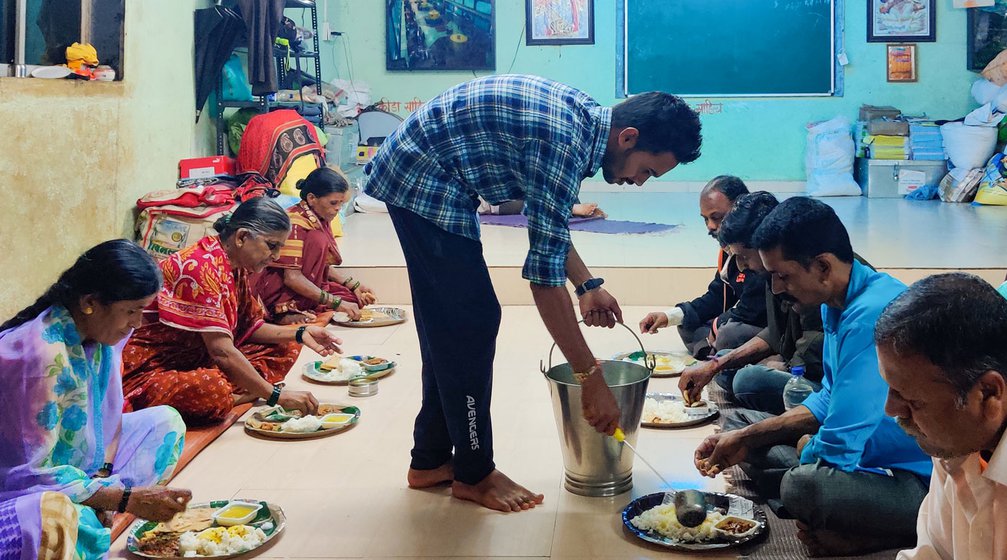 'The revenue department made us fill a form [for compensation] but nothing has been announced yet', says Ganesh Shelar, who is helping out at the school

“Nobody wants to go back to their homes [in Mirgaon]. We don't want to stay in this area anymore, we want complete rehabilitation,” adds Uttam Shelar.

Sanjay Bakade, Anita’s cousin (her mother’ sister’s son), who survived the landslide, says, “The government had promised us temporary houses by Independence Day [August 15], but they haven’t kept their promise. How long will we have to live in this school?” The toilets for women at the school are inadequate, drinking water is a problem too. “We are even ready to move to a different district,” he adds, “but we want total rehabilitation.”

On August 14, at around 4 p.m., the people staying at the school gathered together for to say the names of the 11 from Mirgaon who died in the landslide, and to be silent for a while. Everyone’s eyes were closed. Only Anita’s were open, perhaps still in shock at losing 11 family members.

She too, like the others, is still at the school with her husband and son, both farmers. Sitting on the ground in a corner of the hall with a few of her relatives, she says, “We have lost our family, our houses, our everything. Now we won’t go back to our village.” She is in tears and cannot speak further.

Hrushikesh Patil is a Sawantwadi-based independent journalist and a student of Law, who covers the impact of climate change on marginalised communities

Other stories by Hrushikesh Patil