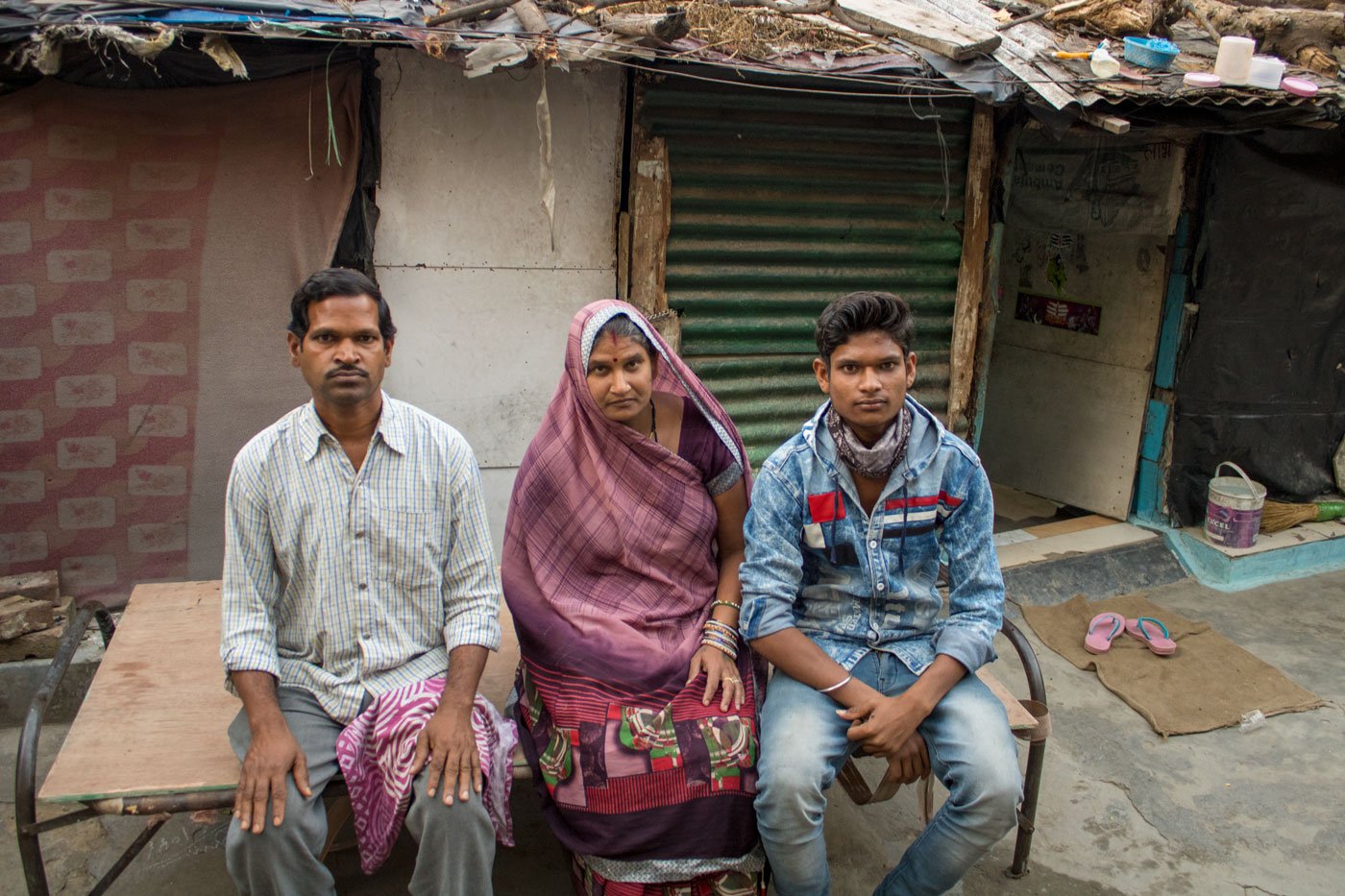 'We went from a handful to nothing’

Migrant workers in Jammu, like the Chandra family from Chhattisgarh, were left with no work when the lockdown began. They got by with rations given by nearby buildings, and are now slowly finding work again

Narmadabai was grinding tomatoes on a silbatta, sitting on the floor at dusk in her jhuggi . Her husband Mohan Lal cut them into tiny pieces, and placed them on a piece of cloth.

“We churn these into chutney . The houses nearby give us rice sometimes. If not, we gulp the chutney down to keep our stomachs from growling,” Narmadabai had said, when I met the family towards the end of April. She was referring to the residents of nearby buildings, who occasionally gave rations to the labourers living in three shanties in a back lane of Durga Nagar, in the west of Jammu city.

When the Covid-19 lockdown began on March 25, procuring food had become difficult for Narmadabai Chandra and Mohan Lal Chandra – more so after they had been mostly without work during the winter months till February, and were using up their sparse savings.

Narmadabai, 48, is a daily wage labourer at construction sites in Jammu, and earns Rs. 400 a day for around 20-25 days a month. Mohan Lal, 52, is a mason, and earns Rs. 600 a day. “Just when work started to pick up by February, the lockdown was imposed,” said Mohan Lal. “We went from a handful to nothing.”

In the room next door live Mohan Lal’s younger brother, Ashwini Kumar Chandra, who is in his early 40s, and his wife Rajkumari, 40. Ashwini too works as a mason and earns Rs 600 a day, while Rajkumari works at construction sites and on nearby farms and gardens, for around Rs. 400 a day.

Both families came to Jammu from Barbhata village in Nawagarh taluka of Chhattisgarh’s Janjgir-Champa district. Narmadbai and Mohan Lal came in 2002 – pushed out by drought. “The drought swallowed everything,” Mohan Lal told me, “Cattle, livelihoods and everyone’s basic survival. We lost so much, we had to leave.” 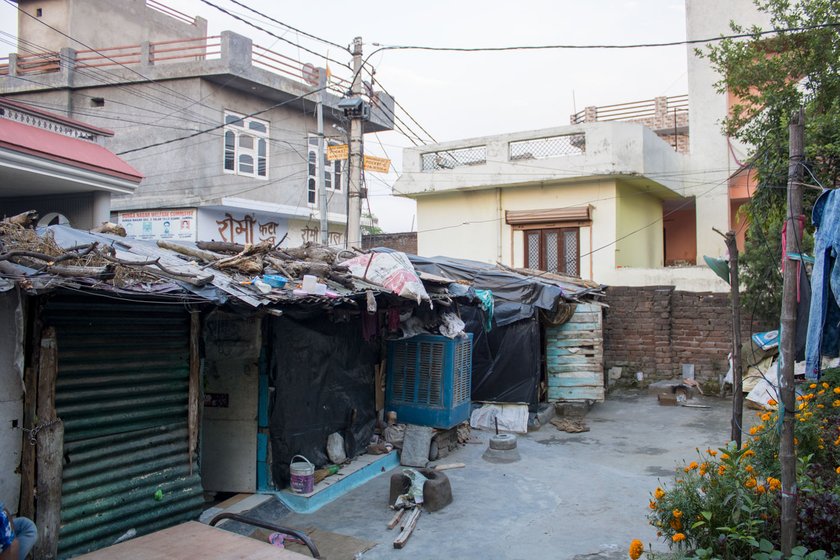 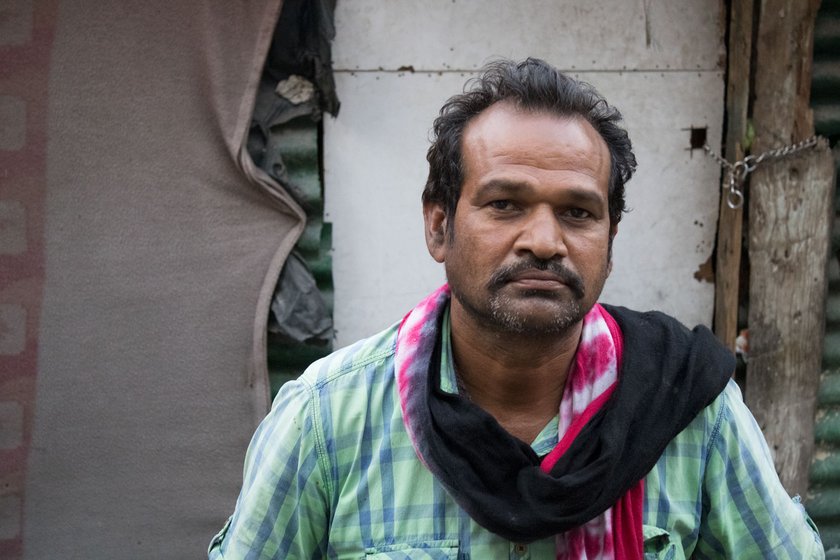 People in nearby buildings gave rations to the labourers living in the three rooms (left) in a back lane in Jammu city. Mohan Lal (right) resides in one of the rooms

Ashwini and Rajkumari ( in the cover photo on top, with their son Pradip ) arrived here around seven years ago after trying to earn a livelihood from agricultural work, construction labour, tailoring and running a garments shop. They have left three other children with their grandmother in Barbhata.

In the village, the brothers cultivated three acres. “We grew brinjal, tomatoes, lentils. “But the rains failed, drought arrived, the wells dried up..." Mohan Lal said. The farmland lay fallow for years, till the family leased the land to a farmer in the village for an annual rent of Rs. 10,000.

Someone from their village had suggested Jammu – they had heard it was cheaper to live in, and plenty of work was available here. “We left Barbhata without much in hand or mind,” Narmadabai said. “We came with some savings and hope, with no plan of what and how to do. We just got onto a train and arrived.”

Soon, they found work as labourers through a local contractor. “We have worked with many of them [contractors] over two decades,” Mohan Lal told me.

But the lockdown cut off their work and income. “Not more than 2,000 rupees,” he had said, at the end of April, of their small savings. “We don’t get paid daily, but get 2,000-3,000 rupees every few weeks.”  The contractor deducts that amount from their total earnings at the end of the month. After the lockdown began, at the brink of running out, Mohan Lal borrowed Rs. 5,000 at a monthly interest rate of 5 per cent from the contractor. “This was the only option left," he said.

“There aren’t enough savings,” Narmadabai added. “We have two daughters back home [both are BSc students]. We have to send them 4,000 each, every month. And the rest is used for ration, soap, oil and other expenses.” 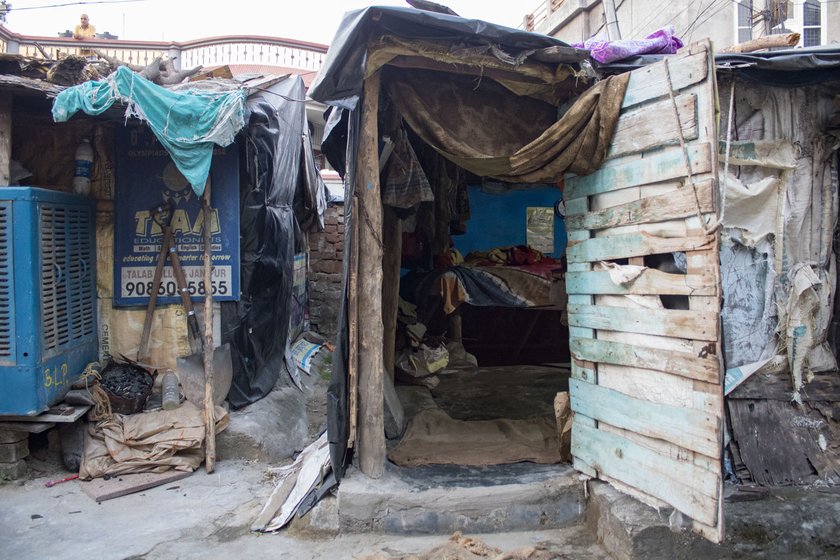 Ashwini and Rajkumari live in the room next door

‘When there’s less work during monsoon and winter, we stitch a shirt or two for a few extra rupees,” added Ashwini; he and Rajkumari have a rickety sewing machine. “Like the others, we are struggling as well. We have a loan to pay off too.” Their middle child, Pradip Chandra, 17, is a labourer as well; he came to Jammu, after he was unable to clear his Class 10 exam last year. He ropes in another Rs. 400 a day.

In the third hut live Dileep Kumar, 35, and Tiharinbai Yadav, 30; they too work at construction sites, earning Rs. 400 a day each. Wary of thekedaars who short-change them or delay payment , they seek work at the Talab-Tillo labour naka , around half a kilometre away.

The family came to Jammu eight years ago from Baheradih village  in Champa taluka of Janjgir-Champa district. “I was an agricultural labourer in my village. The place has been arid for a long time and it was time to migrate,” Dileep said.

They have enrolled their 15-year-old daughter Poornima in a private school in Jammu for her Class 10 this year. (It was Poornima who helped translate these interviews from Bilaspuri, though some of them spoke in Hindi too.) For her education, they have taken a loan of Rs. 10,000 from a private moneylender in Baheradih. “Out of which, only 3,000 is left,” Dileep had told me at the end of April. “The sum which we would’ve used for her education is now keeping us alive.”

The three families don’t have ration cards registered in Jammu, and cannot collect grains at the PDS (public distribution system) outlet around half a kilometre away. “We are told they do not give it people from outside. We are abused and shooed away,” Ashwini said. ‘Sustenance and repayment – our lives revolve around this after the lockdown. It’s the worst situation we’ve been in the last seven years here. We are managing at the mercy of our neighbours.”

While people in the bigger and better-off buildings and houses in this lane helped in the initial days too, over the last few weeks they have stepped up the rations and vegetables they are giving the jhuggi residents every few days. When I met the families again, around May 18, their struggle had abated due to this help.

“We’re doing much better now,” said Mohan Lal. “Four households around us donated 15 kilos of flour, 10 kilos of rice and 5 kilos of potatoes. They’ve told us to stay, and not leave. They assured us we can ask for more once these supplies gets over. We were even given Rs. 500 each, which we used to stock up oil, spices and salt.”

“This is what is keeping us going. And twice a distribution van that belongs to a sethji came,” Ashwini said. “But once all this runs out, we don’t know what we’ll do.” 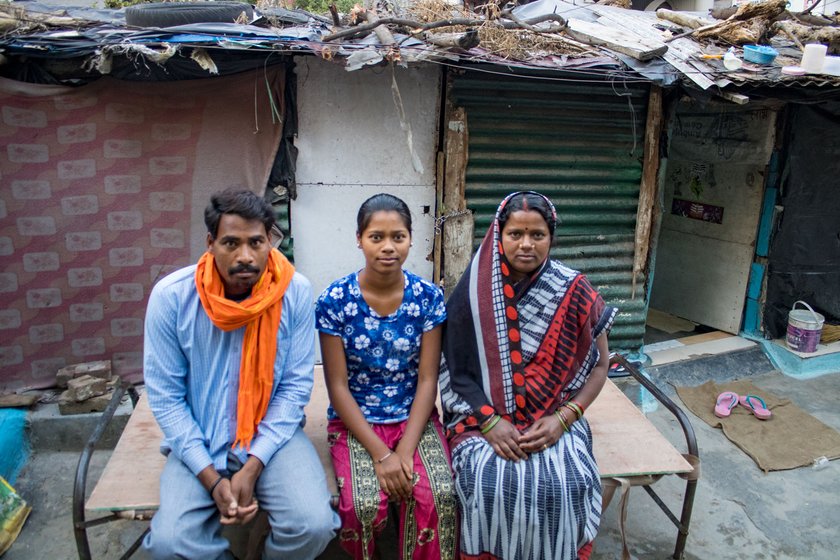 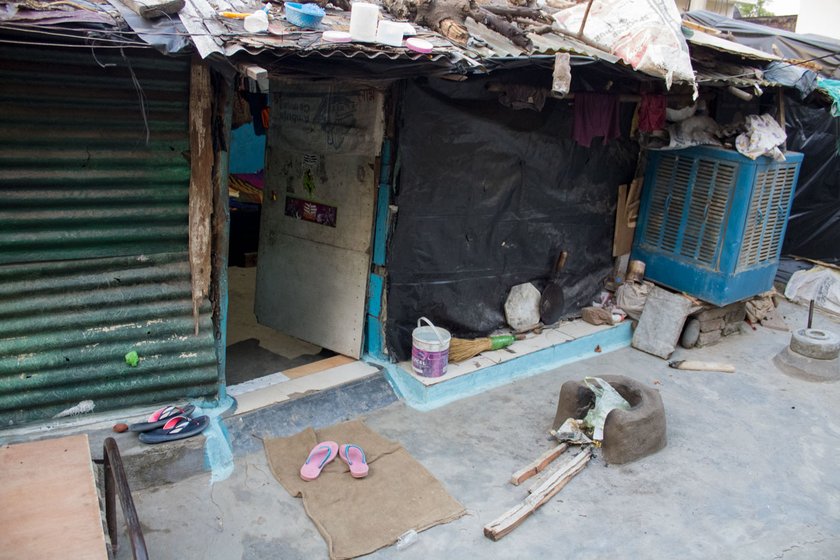 Dileep Kumar and Tiharinbai Yadav work at construction sites; their 15-year-old daughter Poornima studies in a private school in Jammu

Around May 10, Mohan Lal and Narmadabai also started going to work again. “I have received Rs. 3,000 as wages so far,” Mohan Lal said. “The contractor will deduct the 5,000 I borrowed [when the lockdown began] from the final payment. For now, I’m glad that work has started and there are helpful people around us.”

The other two families are also finding work cleaning and sweeping shops and godowns that are slowly opening up. “Some houses and shops need a lot of cleaning after being shut during the lockdown. We’re called directly by them, and paid on a day’s basis. I’ve managed to earn 1,000 rupees so far,” Ashwini told me on the phone in early May.

He added that his family has not received the relief (Rs. 500 every month from April to June) or extra rations announced by the central government. “Even if we did, is this amount enough to survive?’ he asked. “We received 2,000 rupees under the Kisan Samridhi Yojna. That’s it.’”

“The city was built by our blood and sweat, our labour,” added Mohan Lal, angrily. “And now the government refuses to help us in any way.”

However, Saurabh Bhagat, commissioner, Department of Labour and Employment, government of J&K, told me on the phone, “We’ve done our bit.” Jammu is home to around 30,000 interstate migrants, he estimates. “A major portion of our labour comes from states like Bihar, Chhattisgarh, Madhya Pradesh and Odisha. The government even decided to give the labourers Rs. 1,000 through DBT (direct bank transfer) every month from March. Some might contend they haven't received the amount – it could be for media attention or for some extra aid in case they are not able to make ends meet.”

Back in the three rooms in the small lane in Durga Nagar, though the situation has moved back from the brink, it remains uncertain. “We are constantly awake and alert now,” says Dileep, “in the hope and anticipation that more help will keep coming our way.”

Rounak Bhat is a 2019 PARI intern. He is an undergraduate student of journalism at Symbiosis International University, Pune. He is a poet and illustrator, and interested in development economics.

Other stories by Rounak Bhat