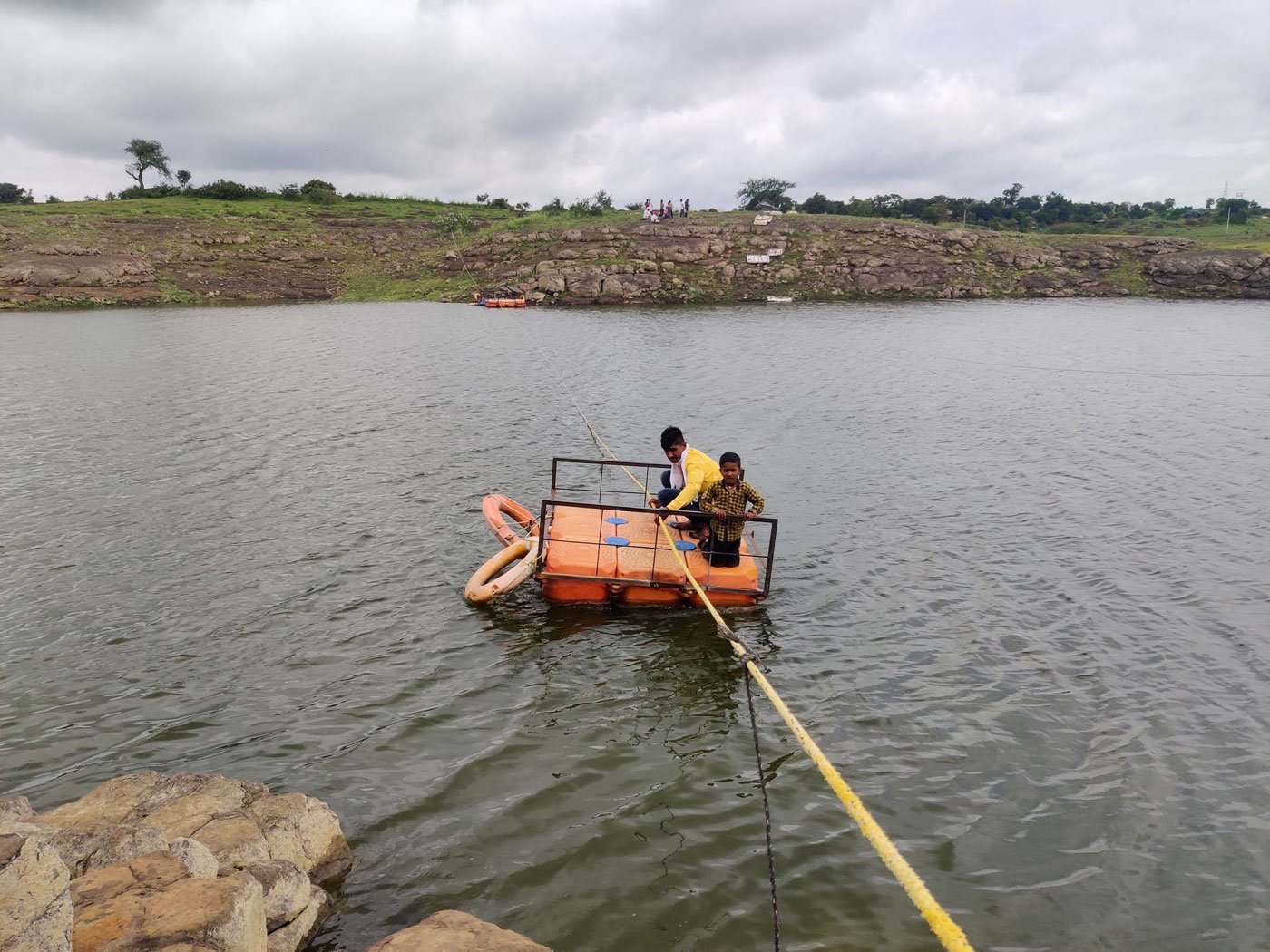 'We have been pleading for a bridge in Sautada'

Covid-19 has heightened the physical isolation of Beed district's Sautada village, where people risk their lives crossing the river to access everything from markets to hospitals

On a breezy afternoon, with her grandson on her waist, Usha Shinde stepped on to a raft to cross the river. The unsteady boat tilted more than she expected it to and Usha lost her footing. As she fell into the river with the child, she feared for their lives.

It happened in March this year, when the second wave of Covid-19 was spreading through the country. Usha’s grandson, four-year-old Shambhu, had been running a fever. “I was afraid that he might have been infected by corona[virus],” says Usha, 65. “His parents were away in western Maharashtra, working in a sugar factory as seasonal labourers. So I decided to rush him to the doctor.”

But the journey entailed crossing the river by her village in a makeshift raft. “I couldn’t balance myself and fell in with Shambhu,” says Usha. “I can’t swim. Luckily, my nephew was close by. He jumped into the water and helped us get out. I was scared, I didn’t want anything to happen to my grandson because of me.”

Usha’s village, Sautada, is on the banks of Vincharna river in Maharashtra’s Beed district. The spectacular Rameshwar waterfall, which plunges into the river from a height of 225 feet, is about 1.5 kilometres from the village in Patoda taluka . The river splits Sautada into two, cutting off a portion of the village from the main part. In the absence of a bridge, people from Shinde Wasti – the isolated part of Sautada – cross the river to access everything from shops to hospitals. 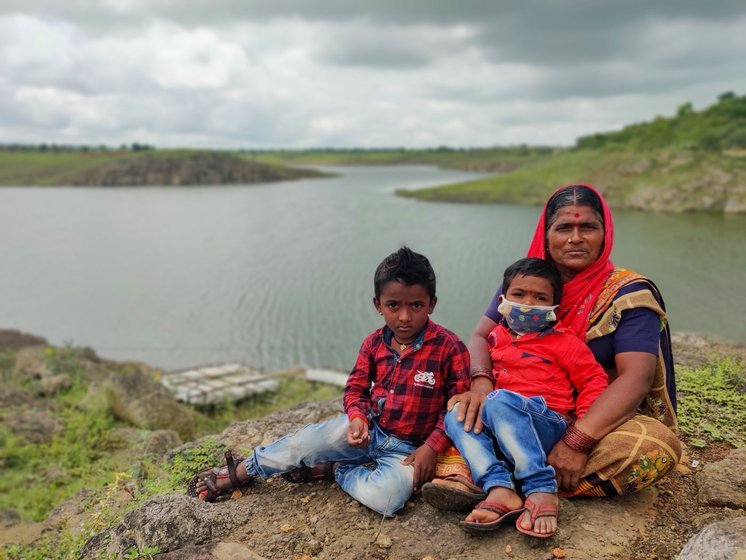 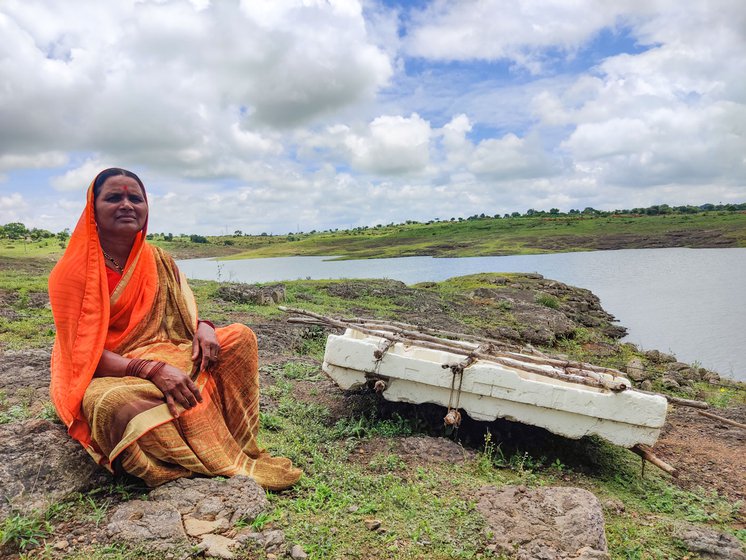 Left: Usha Shinde with her grandsons, Shambhu (in her lap) and Rajveer. Right: Indubai Shinde and the old thermocol raft of Sautada

To make the crossing easier, the villagers have rowed a thick rope across the river. The rope passes from between the rafts and secures them to the line, preventing them from drifting away. The three rafts are parked at the riverbank, a short trek down a hill. The beauty of the serene river surrounded by hills and green fields is marred by the strain of the journey. A person must step on rocks, carefully balance their body and then climb onto the wobbly raft, which is propelled by pulling the rope. It takes 5-7 minutes for the raft to reach the other side.

“We have been pleading for a bridge for years now,” says Balasaheb Shinde, 46, a teacher at the government primary school in Shinde Wasti. “There is another way to get out of here, but the route is much longer. It goes through farms, but the farmers don’t let us pass. So we risk our lives each time we step out.”

Restricted access to their part of Sautada has affected almost every one of Shinde Wasti's 500 or so residents. It has been particularly harsh on children and women. “Even pregnant women have to cross the river on the shaky raft. Can you imagine how dangerous that is? Often, a woman is sent to a relative's home for the last two months of pregnancy," says Indubai Shinde, a 40-year-old farmer with 10 acres of land in the village. "We can’t even shift to the other side of the river because our farmlands are here.”

When Indubai’s 22-year-old daughter Rekha was pregnant, the fear of an emergency stopped the young woman from visiting her mother across the river. “Normally daughters go to their parents’ home during pregnancy. But I couldn’t look after my daughter, and I regret that," she says. "What if she went into labour and we couldn’t take her to the hospital on time? We couldn’t take that risk. We have to think twice to access even basic healthcare.” 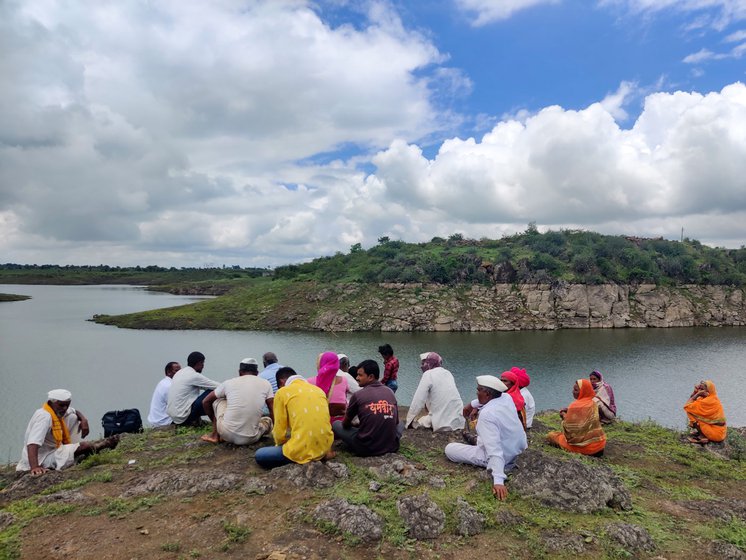 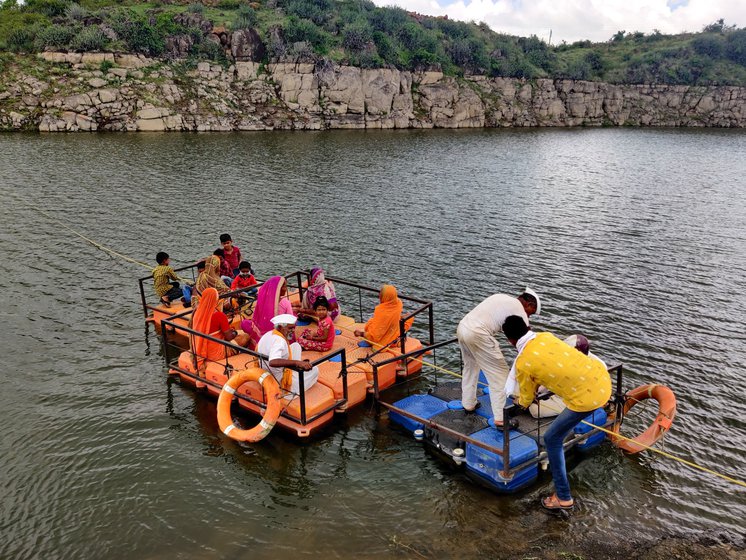 Left: Residents of Shinde Wasti waiting to reach the other side of Sautada village. Right: They carefully balance themselves on rocks to climb onto the unsteady rafts

The villagers’ isolation became a bigger concern after the outbreak of Covid-19 in March 2020. “Luckily, people have not died of Covid symptoms here,” says Balasaheb. “When some of us fell sick, we couldn't get tested. Someone from here would go to the medical store [across the river] and bring paracetamol.”

Ganesh Dhawle, a doctor and health activist from the nearby village of Limbaganesh, travelled to Shinde Wasti twice after the coronavirus infection broke out. “I found several people complaining of body aches, headache and other Covid-like symptoms. I treated the symptoms,” he says, adding that he did as much as he could. “A permanent solution must be found. Sautada is lagging behind in vaccination too. You can’t have a village that is only accessible through a makeshift raft in the 21st century.”

The rafts ferrying the villagers now are still sturdier than the older ones that were in use for a long time. The new rafts – assembled by a group of well-wishers from Mumbai earlier this year – have iron railings and rubber rings. “We used truck tyres or thermocol sheets to go across before,” says Vatsala Shinde, a 70-year-old farmer with three acres of land in Shinde Wasti. “They were more dangerous and difficult to manage. Thermocol sheets are fragile.” 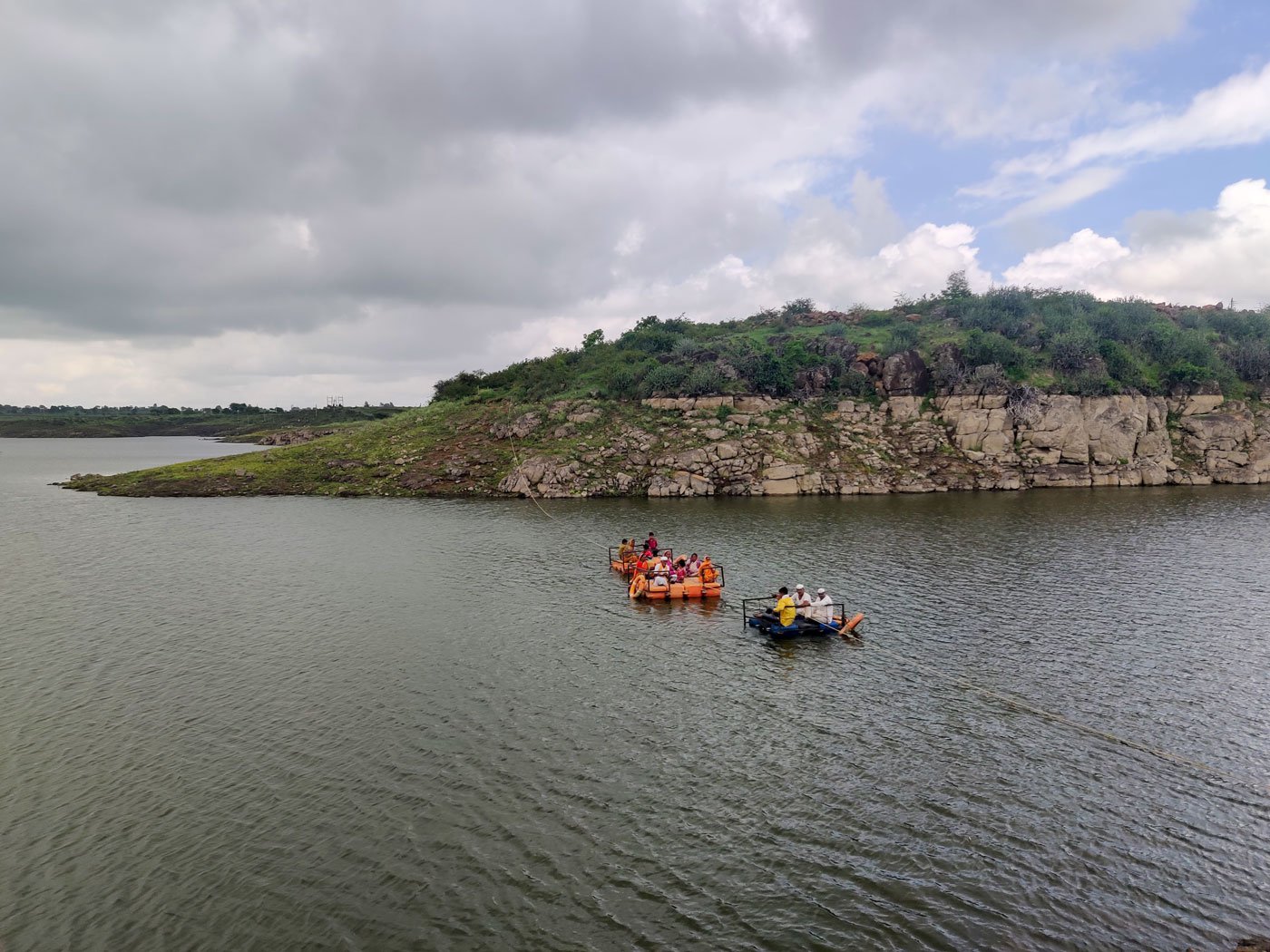 It takes 5-7 minutes for the rafts to cross the Vincharna. The journey is more risky in the monsoons, when the river water rises high

It is the reason why most of Shinde Wasti's children have not studied beyond Class 4. “The primary school here has only up to fourth standard,” says Indubai. “How can you trust 10-year-old children to cross a river on a tyre or a thermocol sheet? Most of us are busy earning a living on our farms, so we can’t drop them to school every day.”

The new rafts, hopes Indubai, will help the children attend the secondary school on the other side. But high water levels pose a risk to anyone crossing the river in the monsoons. “Luckily, no one has drowned yet. At one time or another most of us have fallen into the river,” says Indubai.

Each of the rafts accommodates 4-6 adults. A heavier load can easily overturn it. So it is a catch-22 when the residents go shopping – they must stock up enough groceries to avoid multiple trips across the river but at the same time they can’t bring back more than what the raft can handle.

The villagers don't strike the perfect balance every time. “I have fallen into the river a few times, with pulses, milk and other groceries,” says Vatsala. “With age, I have stopped going to the market. Most of the women in the village can’t swim. And it is difficult for a woman to navigate the raft wearing a saree. So women mostly stay back in the village. If there is an emergency, it is a nightmare to be in our village.” 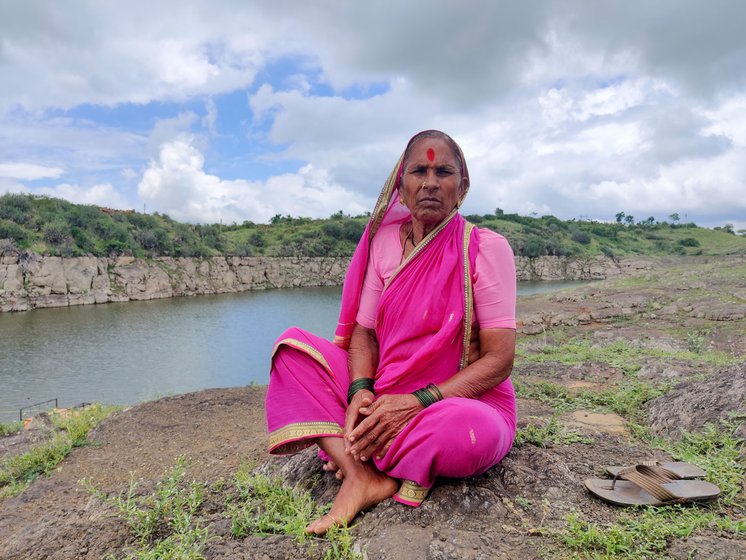 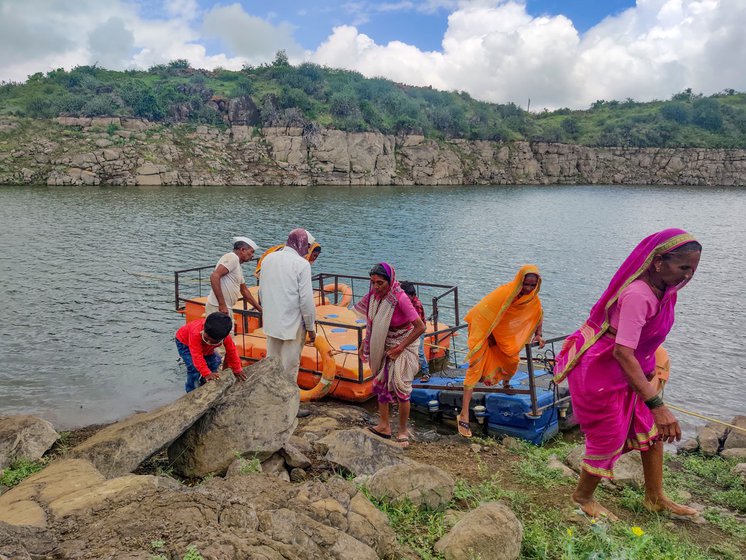 Left: Vatsala Shinde says she has fallen into the river quite a few times while climbing onto the rafts. Right: Getting off from a raft is as difficult as getting on it

Vatsala narrates an example from more than a decade ago: Her daughter-in-law Jijabai had fallen sick with food poisoning. She had to be taken to the hospital because her health was deteriorating. “But she couldn’t climb onto the thermocol sheet. She was really sick and we had to wait for her to gather herself. It took her a long time to make it across the river.”

The delay proved to be fatal – Jijabai died soon after reaching the hospital. “The point is not whether she would have survived had she reached the hospital earlier,” says Dhawle. “No relative should have to wonder whether their family member would have lived had they had made it in time.” His efforts at taking the matter up with the district authorities have been to no avail, he says.

Sautada's seclusion has also affected the marriage prospects of its young men. “We are finding it extremely hard to get our boys married. Parents worry that their daughter will be stuck here,” says Balasaheb. "I don’t blame them for not wanting to send their daughters here. Even our relatives don’t visit us that much.”