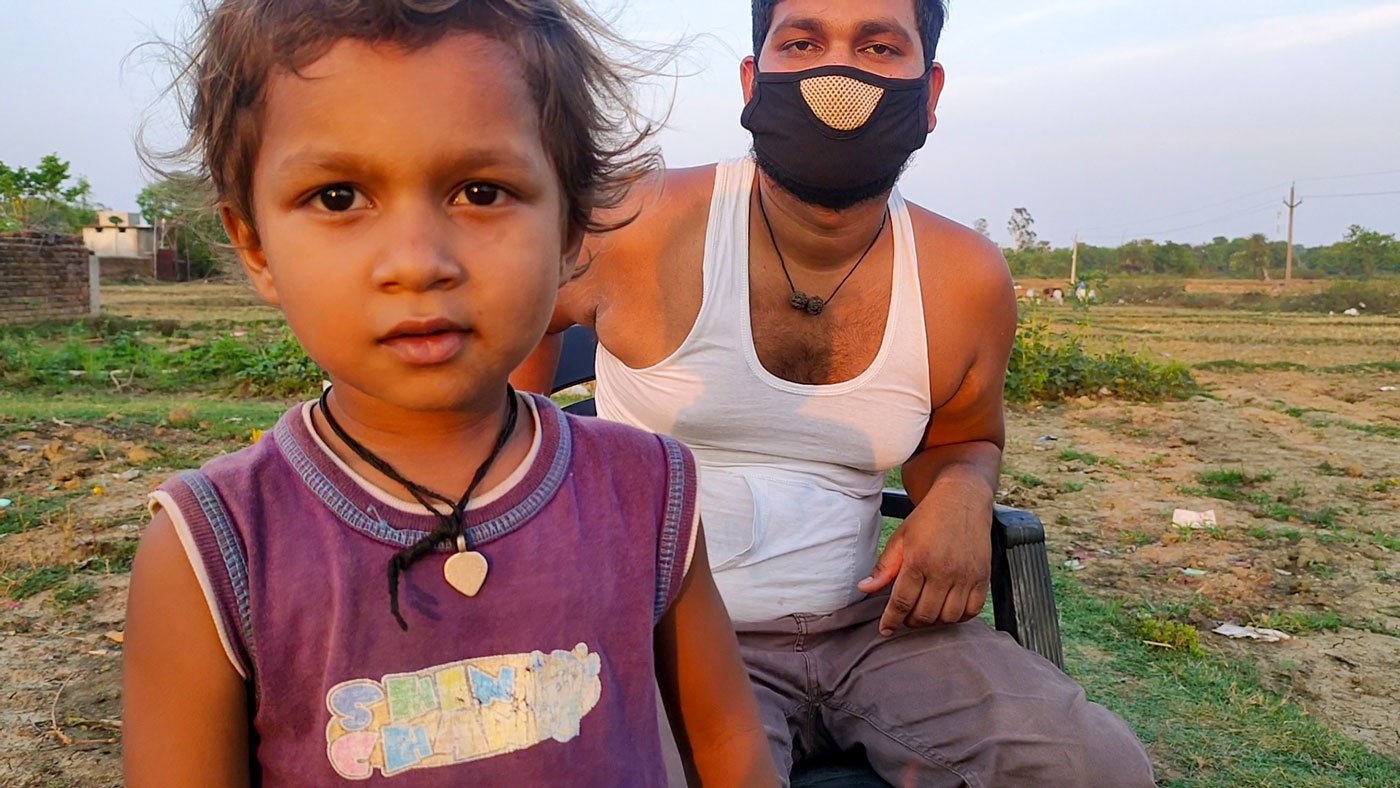 Ajay Kumar Saw, a clothes seller in Jharkhand’s Asarhia village, spent Rs. 1.5 lakh on Covid-19 care at a private clinic and is now in debt. A story co-authored by a video editor who lives in the same village

In early May, Ajay Kumar Saw noticed that he was running a fever. So he visited a doctor at a private clinic in Itkhori town, around eight kilometres from Asarhia, his village in Jharkhand’s Chatra district.

The doctor didn’t administer a Covid test and instead diagnosed that 25-year-old Ajay, a garment seller (in the cover photo on top with his son), had typhoid and malaria. He tested Ajay’s blood oxygen saturation level though – it was between 75 and 80 per cent. (The normal range is 95 to 100.) Ajay was then sent home.

After 2-3 hours he began finding it very difficult to breathe and got worried. He left the same day to see another doctor, this time at another private clinic in Hazaribagh (roughly 45 kilometres from Asarhia). Here, too, he was tested for typhoid and malaria but not for Covid-19.

However, Ajay tells Haiyul Rahman Ansari, a video editor from the same village, that even though he was not administered a Covid test “the doctor saw me and said I had corona. He told me to go to Sadar Hospital [a government hospital in Hazaribagh] because if he were to treat me, it would cost us more. Out of fear, we said we’ll pay whatever it costs. We don’t trust government hospitals. No one who goes there for [Covid] treatment survives.”

Before the pandemic, Ajay would travel from village to village in his Maruti van to sell clothes, and earned Rs. 5,000-6,000 a month

Watch video: In Asarhia: coping with Covid, dealing with debt

This story’s co-author, Haiyul Rahman Ansari, had returned home to Asarhia for the second time in the span of a year in April. He was all set to resume a new job as a video editor in Mumbai that month when Maharashtra’s 2021 lockdown was announced. He had gone back for the first time in May 2020 during the nationwide Covid-19 lockdown (see PARI’s story on him here ). He and his family managed with the paddy harvest on their 10-acre farmland, keeping some for their own use, selling some in the market.

In Asarhia, 33-year-old Rahman found himself without work. His video editing skills mean little in the village, and the sowing of rice and corn on his family’s 10-acre plot began only in mid-June. He didn’t have much to do until then. Given his background in media – he has a BA degree in Mass Communications and has worked as a video editor in Mumbai for 10 years – we asked him if he would like to report on how people in Asarhia have been affected by the pandemic. He was excited by the idea.

In this video, Rahman tells us about Ajay Kumar Saw's encounter with Covid and his growing debt. After Ajay and his family, fearful about government hospitals, decided to continue his treatment at the private clinic/nursing home in Hazaribagh, he was put on oxygen support and medication for Covid. He had to spend seven days there, till May 13. He had no idea it would cost Rs. 1.5 lakh. The only way Ajay’s family could afford this expense was by taking loans from multiple sources – a moneylender, from a women’s group his mother is a member of, and from his grandmother’s family.

Before the pandemic, Ajay would travel from village to village in his Maruti van to sell clothes, and earned Rs. 5,000-6,000 a month. He had to shut down this business during last year’s lockdown and again during this year’s shutdown. In December 2018, he had bought the van by taking a loan of Rs. 3 lakhs, some of which is still to be repaid. His family has survived the past year by relying on the paddy harvest on their one acre land, and by taking further loans. He tells, Rahman: “We’ll return the money slowly, once we start to earn.”

Haiyul Rahman Ansari, originally from Asarhia village in Jharkhand’s Chatra district, has worked as a video editor in Mumbai for a decade.