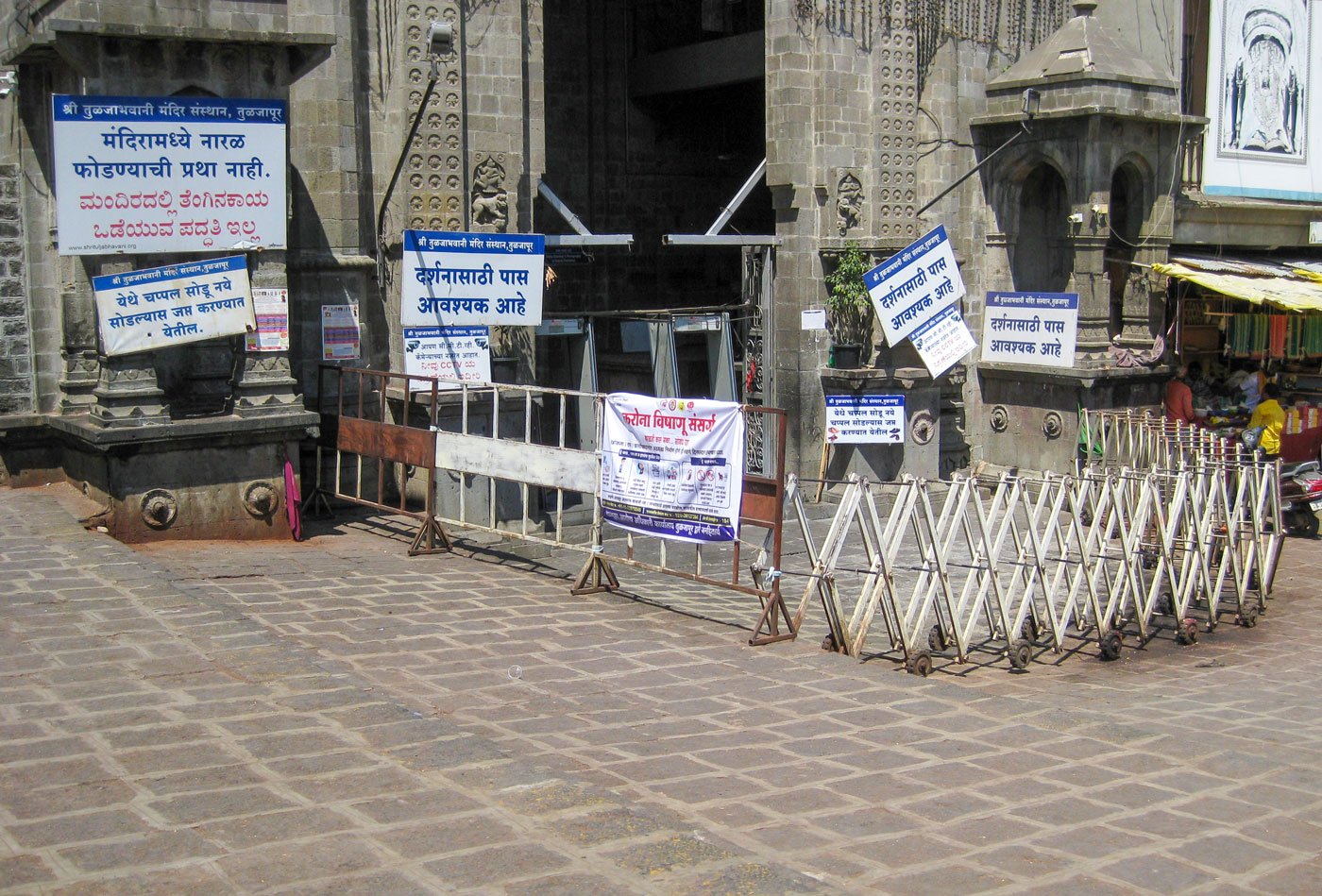 In Marathwada's Tuljapur, shopkeepers, vendors and others whose livelihoods depend on the famous temple in town, are struggling with no sales after the March 17 lockdown measures to prevent the spread of Covid-19

“Not during the plague [of 1994], not during the chikungunya outbreak [of 2006], not even during the earthquake [of 1993] was this temple closed. It is first time in history that we are witnessing this,” says Sanjay Pende, clearly troubled. He is among the main priests at the temple of goddess Tulja Bhavani in Tuljapur town in south Maharashtra.

The temple shut its doors to devotees on Tuesday, March 17, as part of the state’s lockdown to prevent the spread of Covid-19. It’s left people here in disbelief. “What kind of disease is this? Devotees from outside the state are coming here, but they have to make do with darshan from outside the temple. That too after fighting with the police,” says 38-year-old Pende. Part of his concern arises from losing out on his earnings from the daily 10-15 special pujas he conducts. Pende estimates there are over 5,000 priests in Tuljapur who depend on earnings generated by temple-related activities.

The economy of this town of 34,000 people (Census 2011) in Osmanabad district of the Marathwada region revolves around the temple atop a hill, believed to date back to the 12th century. Goddess Tulja Bhavani is regarded as a family deity by many in Maharashtra and other states, and this is one of the main temples dedicated to goddesses along a pilgrimage route in the state. 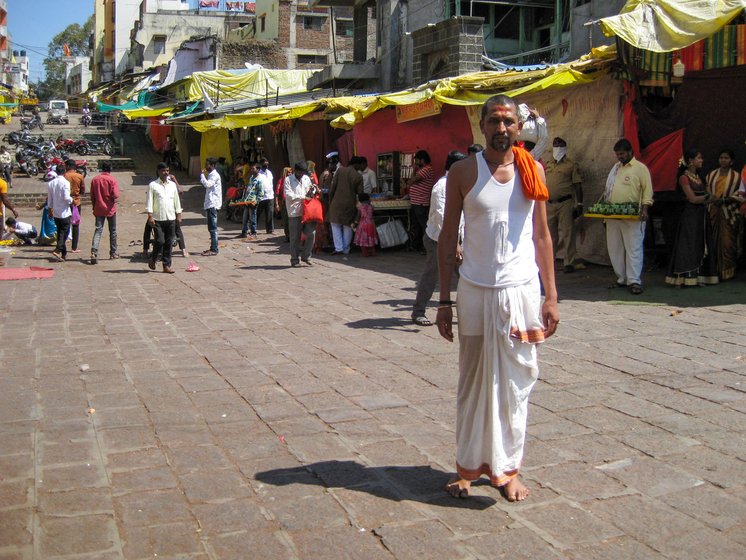 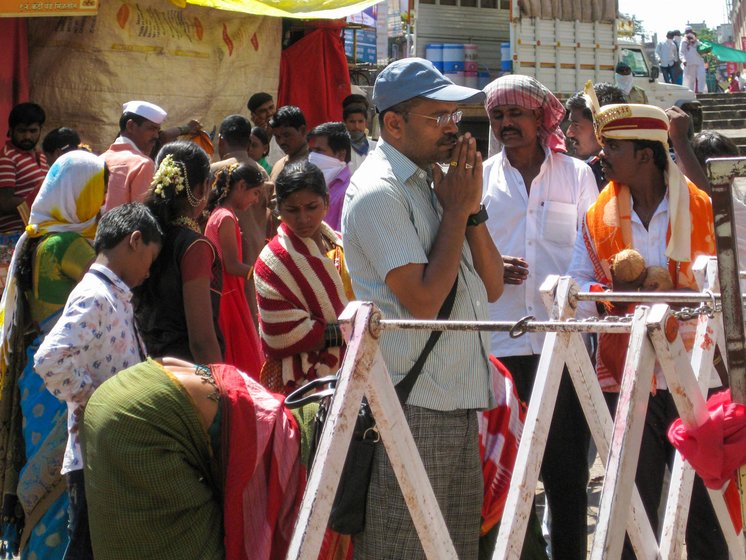 'It is first time in the history that we are witnessing this', says Sanjay Pende (left), a priest at the Tulja Bhavani temple, which usually sees a throng of devotees (right)

But the town has almost come to a halt since March 17. The narrow lanes leading to the temple are all deserted. The chappal stand and cloak room across the road from the temple are empty.

Instead of the usual bustle and stream of private cars, shared taxis, ‘culzers’ [land cruisers], and autorickshaws ferrying devotees from across Maharashtra and from other states, an eerie silence prevails.

The bus stand, around two kilometres away, is nearly silent too – when at other times buses trundle in and out noisily every few minutes, dropping off and picking up a steady stream of devotees and visitors. Tuljapur is a central stop for state transport buses, with connectivity to all major cities and towns in the state as well as to neighbouring Karnataka and Andhra Pradesh.

The town’s ‘temple economy’ is sustained by, and in turn sustains, devotees, tourists, transport agencies, lodges, and numerous small shops selling puja items, prasad , sarees offered to the goddess, haldi-kumkum, cowrie shells, photo frames, CDs of devotional songs, bangles, and more. Shopkeepers here estimate that at least 550-600 shops are located within a two-kilometre radius of the temple. Plus there are street vendors whose survival depends entirely on their daily sales to devotees.

Around half of the shops had downed their shutters by noon on March 20. The others were in the process of closing for the day. The street vendors had all gone. 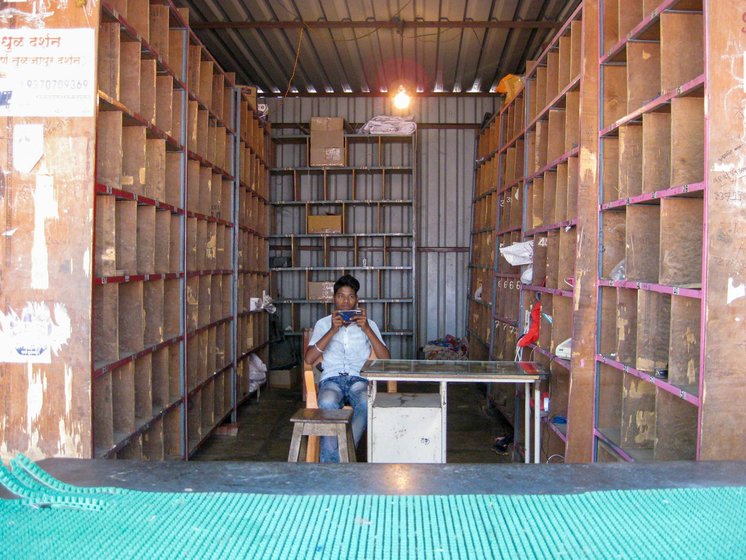 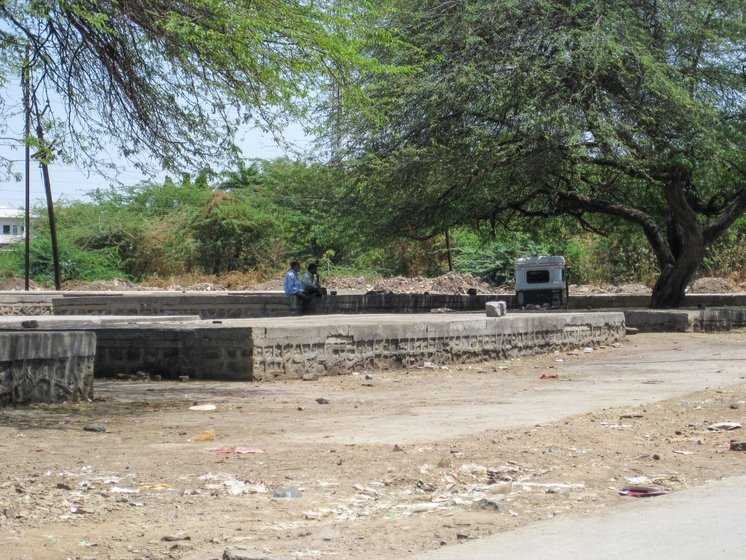 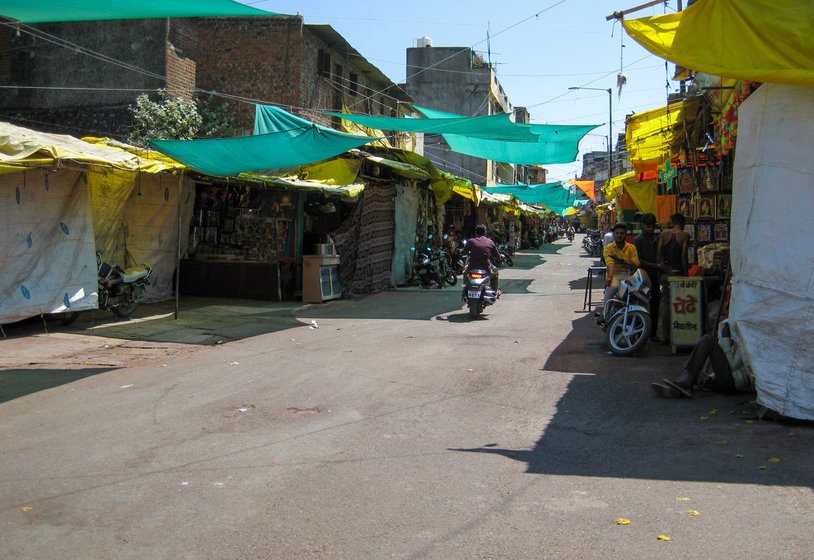 The chappal stand and cloak room opposite the temple are empty (left), the weekly market is silent (middle) and the narrow lanes leading to the temple are all deserted

“What kind of illness is this?” asks a woman, possibly in her 60s, sitting in front of a closed shop. “Everything is closed. Very few people have arrived since Tuesday. They [the temple trust functionaries and police] are not letting us sit here either. But don’t we need something for our belly?” (She was so agitated that she refuses to tell me her name and does not allow me to photograph her. I had purchased a dozen glass bangles from her. Those 20 rupees were her only earning for the day before she decided to go home at noon.)

Not far from where she sits, Suresh Suryavanshi, 60, says, “We were looking forward to the summer months of March to May. On an average, there is a daily footfall of 30,000 to 40,000 devotees after Padva [Gudi Padva, the first day of the Hindu lunar calendar] and the Chaitree Yatra begins on the Chaitree Pournima [April 8].”  Suryavanshi’s shop is adjacent to the main entrance of the temple, and he sells pedha and other prasad items such as puffed rice and roasted gram. “The number [of devotees and visitors] goes to a lakh on weekends [during the yatra ]. Now we hear that the yatra is cancelled. First time in the history,” he says.

Next to his shop, Anil Solapure’s shop selling metal figurines, frames and other decorative articles has for long fetched him a steady monthly income of Rs. 30,000-40,000, from customers who come to the temple throughout the night and all through the day. But that day, by noon, he has not sold a single item. “I have been working in this shop for 38 years. I come here every day. How can I just sit at home?” he says, in tears. 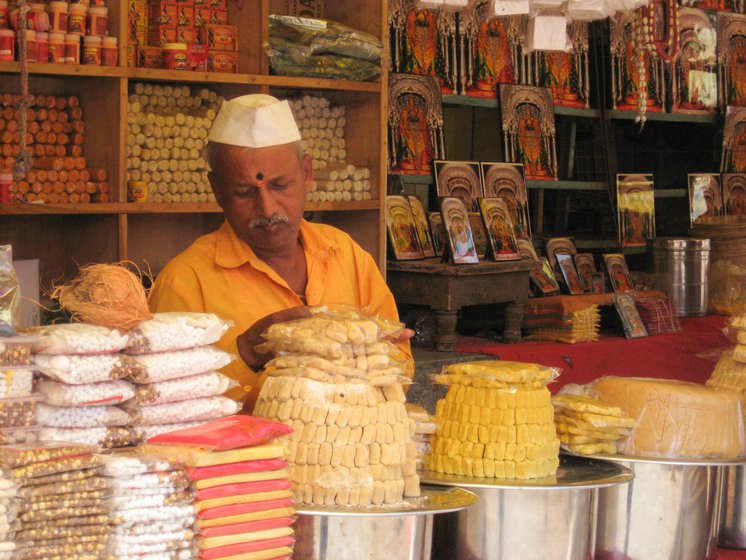 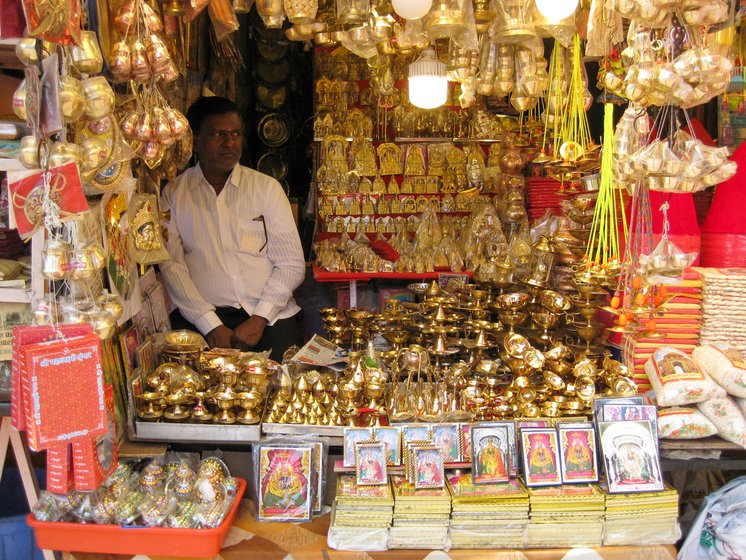 Left: Suresh Suryavanshi says the temple has been closed for the first time in history. Right: 'How can I just sit at home?' asks Anil Solapure, in tears

The lockdown has affected Nagurbai Gaikwad, around 60 years old, too. She is still trying to earn something by asking for jogwa (a tradition whereby worshippers, mostly women, ask for alms every Tuesday and Friday and live off entirely on what they get – they ask for flour and salt, and also money).  An electric current incapacitated Nagurbai’s left palm years ago and she is unable to work as a daily wage labourer. “The Chaitree Yatra would have sustained me. But now I consider myself lucky if someone offers me a cup of tea,” she says.

Not far from the temple, the weekly Tuesday market in Tuljapur town is a source of livelihood for more than 450-500 farmers from nearby villages. The market is now closed, and the farmers, many of them women, are unable to sell their fresh and perishable produce. They might be able to sell some of it in their own villages, but it will not sustain them.

Suresh Rokade, a farmer and a driver with an educational institute, says it is grape season in Marathwada, but plucking has been on hold for two days because the markets are closed. “I hope they will open on Monday [March 23],” he says. (However more restrictions were imposed by the state government that day.) The hailstorm on March 17-18 in neighbouring blocks such as Kalamb and in other districts in Marathwada has added to the anxiety.

Tuljapur does not have any Covid-19 testing facility yet, so not much is known if there are positive cases here, or of the possible extent. A hostel run by the state Social Welfare Department, news reports say, has been turned into an isolation facility with 80 rooms.