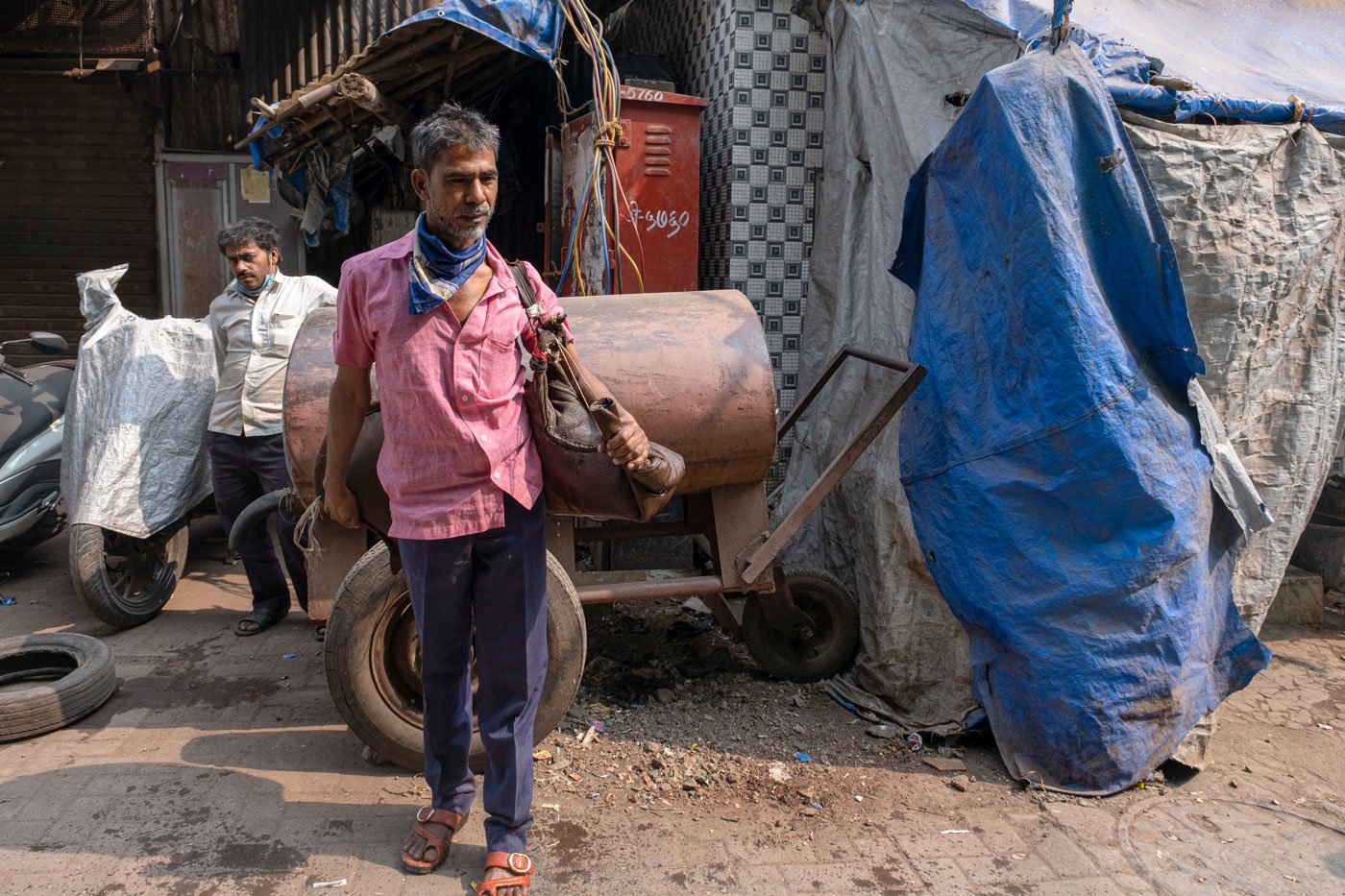 ‘This is the final chapter of our bhisti job’

One of the last few water carriers left in Mumbai's inner city, Manzur Alam Shaikh was forced to give up his mashak for plastic buckets during the pandemic. He is now unsure about his future as a bhisti

Deep in the maze of the narrow lanes of Bhuleshwar in south Mumbai, Manzur Alam Shaikh wakes up by 5 a.m. every day and gets to work. Lanky, and often clad in a checked lungi , he pushes his rented 550-litre metal cart towards Cowasji Patel Tank to fill it up with water. The area is about a kilometre from where he lives – out in the open, at the corner of a public toilet in Dudh Bazar, near Mirza Ghalib Market. He returns to Dudh Bazar with his cart, picks a spot to park it, and starts delivering water to his customers in shops and households nearby.

Manzur, 50, is one of the last remaining bhistis , who earn a livelihood doing this work. He’s been supplying water, for drinking, cleaning and washing, to residents in this part of Mumbai's historical inner city for about three decades. Until the Covid-19 pandemic disrupted the bhistis ’ occupation, Manzur was among the few mashakwalas in Bhuleshwar who carted water in a mashak (also spelled as ‘ mashaq ’), a leather bag designed to carry about 30 litres of water.

But the tradition of supplying water from a mashak “is dead now”, says Manzur, who switched to plastic buckets in 2021. “Older bhistis will have to go back to their villages, and the younger ones will have to find new jobs,” he says. The bhistis ’ work is a remnant of the traditional occupation of the Bhisti, a Muslim community in north India. The word ‘ bhisti ’ is of Persian origin and means ‘water carrier’. The community is also known by the name Saqqa, an Arabic word for ‘water carrier’ or ‘cup bearer’. The Bhisti are categorised as Other Backward Class (OBC) in Rajasthan, Uttar Pradesh, Haryana, Delhi, Madhya Pradesh, and Gujarat (where the community is known as Pakhaali). 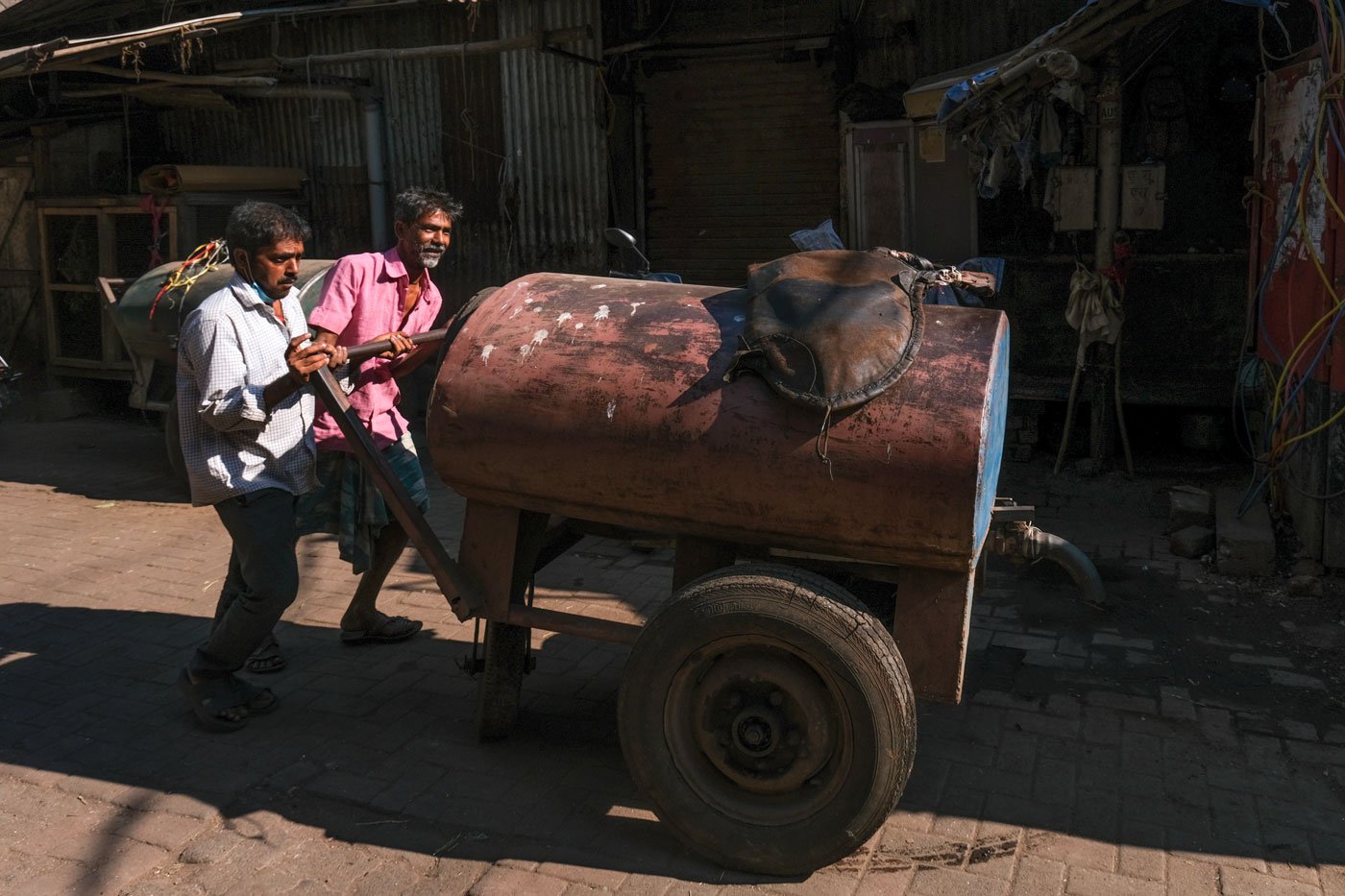 Manzur Alam Shaikh (in the pink shirt) needs a helping hand to push his metal water cart filled with water from the CP Tank area in Bhuleshwar, south Mumbai. His mashak can be seen on top of the cart

“Bhistis ruled the water supply business. They had these metal water carts at various spots in Mumbai,” says Manzur. “About 8 to 12 persons were employed at every cart to deliver the water.” When the once prosperous business of the Bhistis began to decline in old Mumbai, they started looking for other opportunities, he adds. In Bhuleshwar, labourers migrating from rural Uttar Pradesh and Bihar slowly replaced them.

Manzur arrived in Mumbai in the 1980s from Gachh Rasulpur, his village in Bihar’s Katihar district. He sold vada pav for the first couple of months before entering this line of work. Though not Bhisti by birth, he took up the job of supplying water in Dongri and Bhendi Bazar localities of Bhuleshwar.

“I was hired and trained by Mumtaz, a Bhisti from Rajasthan,” says Manzur. “He owned four water carts at the time. Each cart was stationed in a different mohalla [neighbourhood], from where 7-8 persons would deliver water in mashaks .” 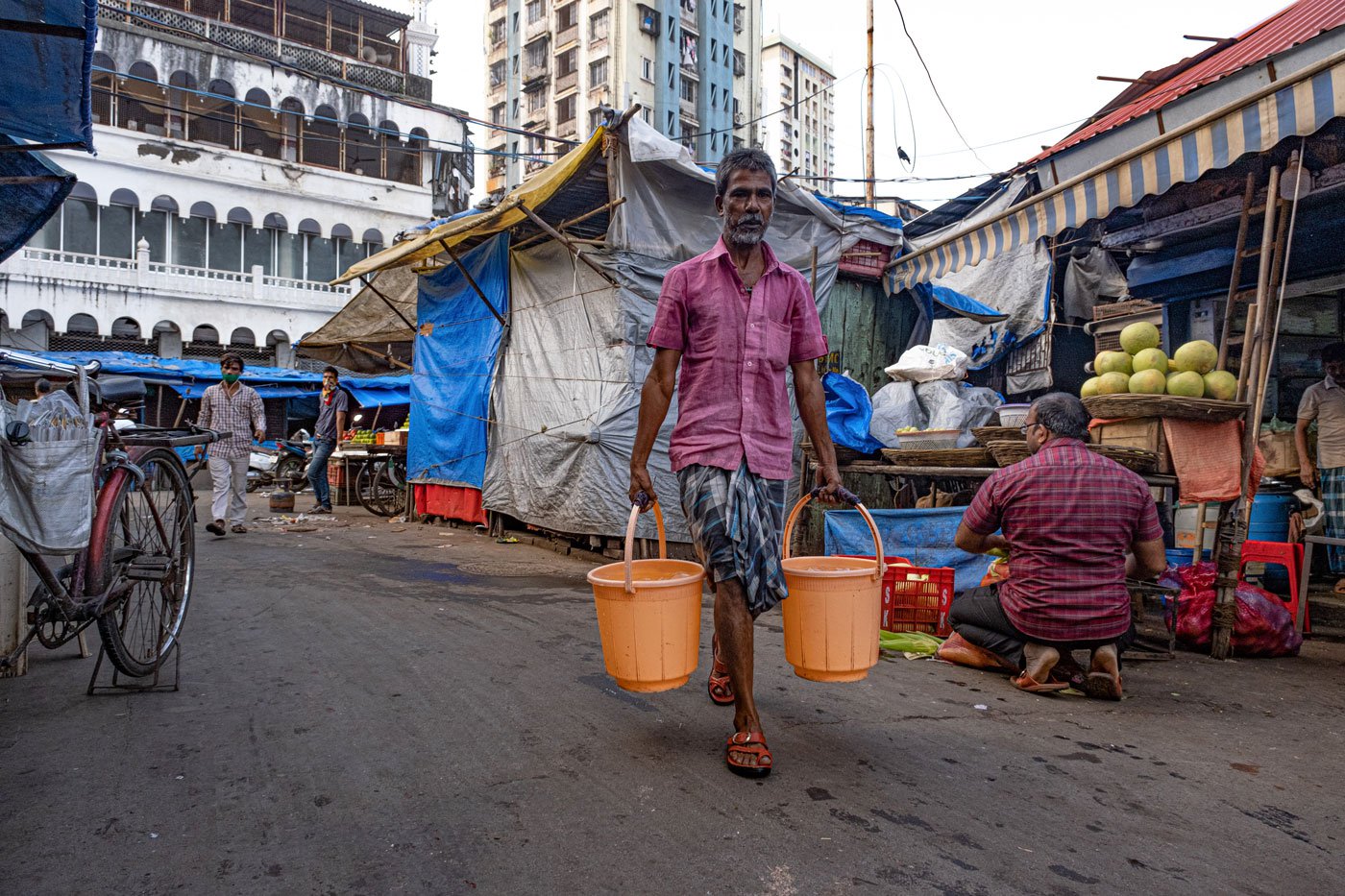 After the Covid-19 lockdowns, Manzur was forced to give up the mashak and switch to plastic buckets to supply water

After working with Mumtaz for about five years, Manzur set out on his own and began to rent a water cart. “We had a lot of work 20 years ago, but only a quarter of it is left now. Our business was badly hit after water started getting sold in plastic bottles,” says Manzur. The rapid rise of  the bottled water industry after liberalisation of the Indian economy in 1991 dealt a serious blow to the bhistis in Bhuleshwar. The total bottled water consumption in India tripled between 1999 and 2004; the estimated turnover of the bottled water industry was Rs. 1,000 crores in 2002.

Liberalisation changed many things – malls replaced small shops, tall buildings took over the chawl s, and tankers started supplying water with motorised pipes. Demand for water from residential buildings steadily declined, and only the small commercial establishments such as shops and workshops were left dependent on the mashakwalas . “Those living in buildings started ordering water from tankers. People also installed pipelines for water. And now, offering bottled water has become the practice at weddings, but we used to supply the water before,” says Manzur.

Before the pandemic, Manzur earned Rs. 15 for every bag of mashak (about 30 litres). Now, he earns Rs. 10 for delivering a 15-litre bucket of water. He pays Rs. 170 per month to rent the water cart now, and spends between Rs. 50 and Rs. 80 a day, depending on the source of water, to fill it. Temples and schools that have wells in the area sell water to the bhistis . “Earlier we used to save at least 10,000-15,000 rupees every month, but now we are hardly left with 4,000-5,000,” Manzur says, comparing the time his business thrived and now. 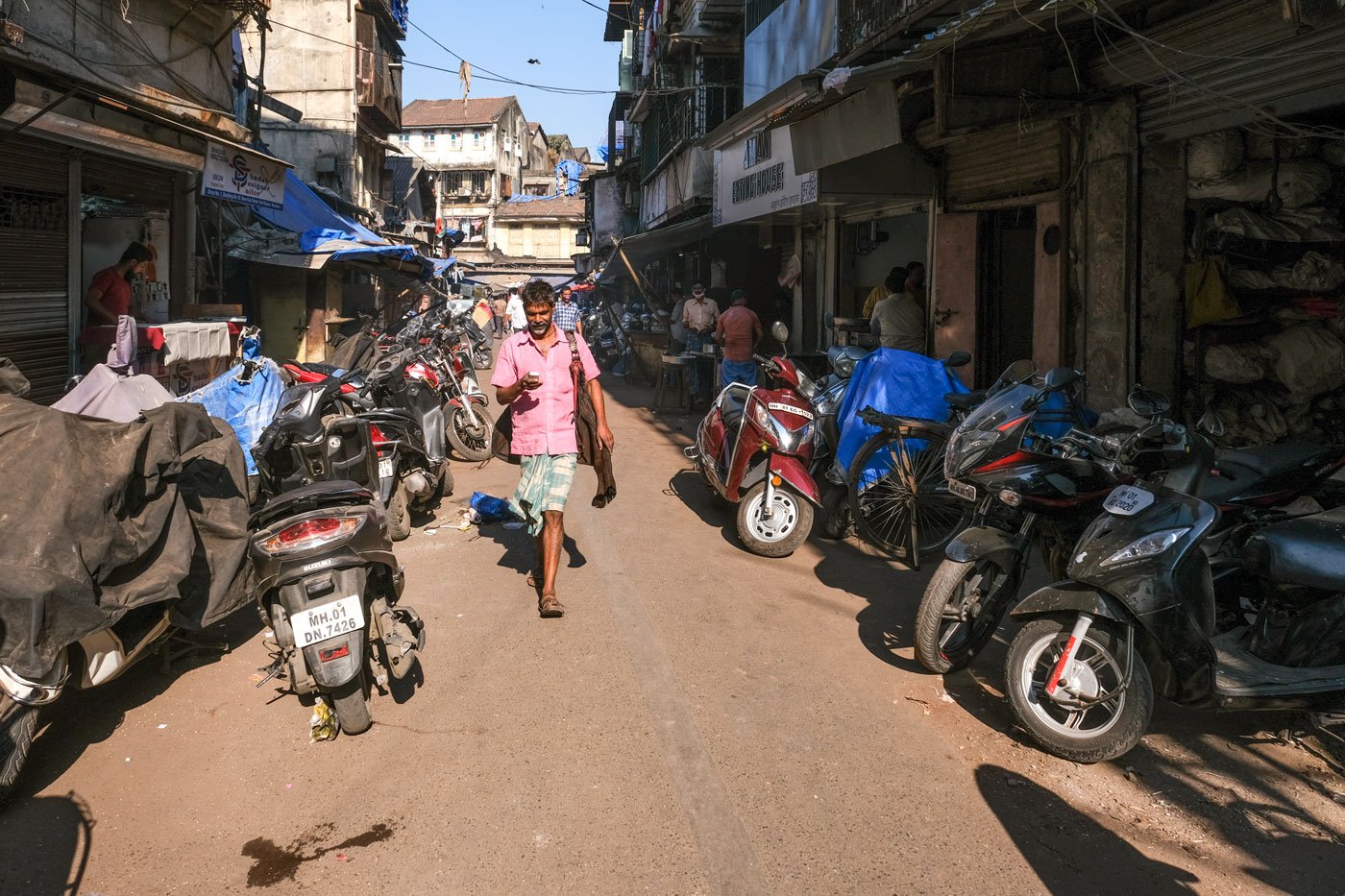 On the way back from making a delivery (in December 2020) , Manzur checks his phone for an order he may have missed. He has regular customers and receives 10-30 orders in a day. While some visit him in person, others call him over the phone to deliver water

His business partner, 50-year-old Alam (who only uses his first name), is also from his village in Bihar. Alam and Manzur take turns working 3-6 months in Mumbai and spending the rest in the village with their families. At home, they take care of their farms or work as farm labourers.

During the nationwide lockdown in March 2020, which extended till June 2020, the mashakwalas had only a few customers left in Bhuleshwar – the support staff of small business establishments in the area, who worked during the day and slept on the pavement at night. But many shops had been shut and their workers had returned home. So Manzur, who had to feed his five children at home, couldn’t earn enough to send money to his family. He started assisting a mason at a building reconstruction site in the city’s Haji Ali area in early 2021, earning Rs. 600 a day.

In March 2021, Manzur left for Gachh Rasulpur, his village, where he worked as a farm labourer for Rs. 200 a day. With the money he earned, he repaired his house. Four months later, he returned to Mumbai and resumed work as a mashakwala , in the Null Bazar locality this time. But his leather bag required repair – a mashak needs mending every two months. So Manzur went looking for Yunus Shaikh to repair it. 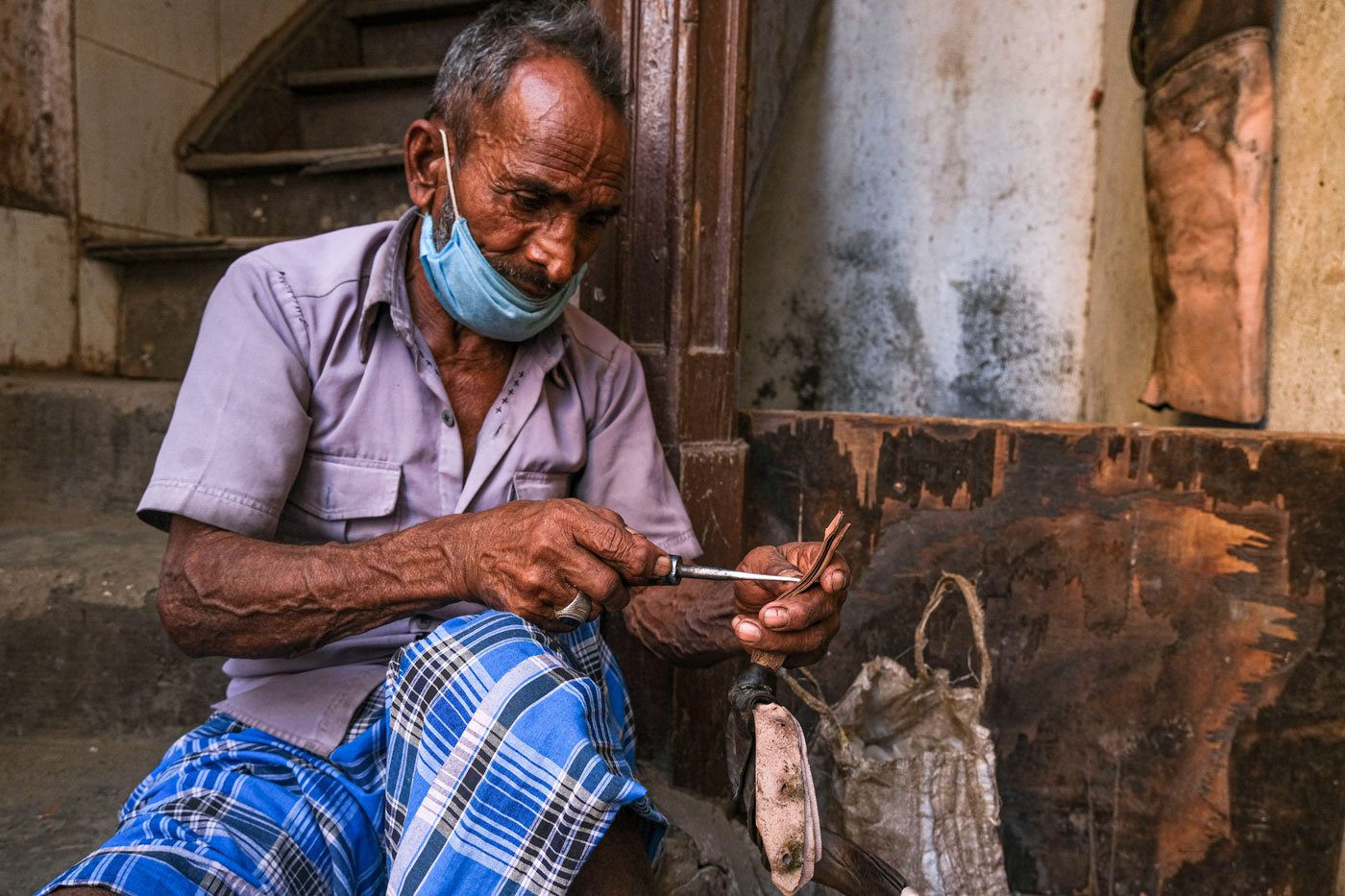 Yunus, who is in his 60s, earned a living crafting and mending mashaks in Bhendi Bazar. Four months after the March 2020 lockdown, Yunus went back home, to Bahraich district in Uttar Pradesh. While he did return to Mumbai in December that year, he didn’t have much work. Only 10 mashakwalas or so operate in the area, and after the Covid-19 lockdowns, they started paying less for his service. Without much hope, Yunus returned to Bahraich in early 2021, never to return. He said he had lost the strength to mend mashaks .

For 35-year-old Babu Nayyar, it spelled the end of his mashak­ -carrying days. “I have thrown it away as it is unrepairable.” He uses a plastic can now to supply water to shops around the Nawab Ayaz Masjid in Bhendi Bazar. “Until six months ago, there were 5-6 people who were using mashaks . All have shifted to buckets or handa [aluminum pot] now,” Babu said after Yunus's departure.

Unable to find anyone to repair his leather bag, Manzur was also forced to switch to plastic buckets. “After Yunus, there is no one to repair the mashak,” Manzur confirms. He finds it difficult now to lift water in buckets and climb stairs. It was easier with a mashak , which was worn slung over the shoulder and could hold a larger quantity of water. “This is the final chapter of our bhisti job,” predicts Babu. “There is no money in it. Motorised pipes have replaced our work.” 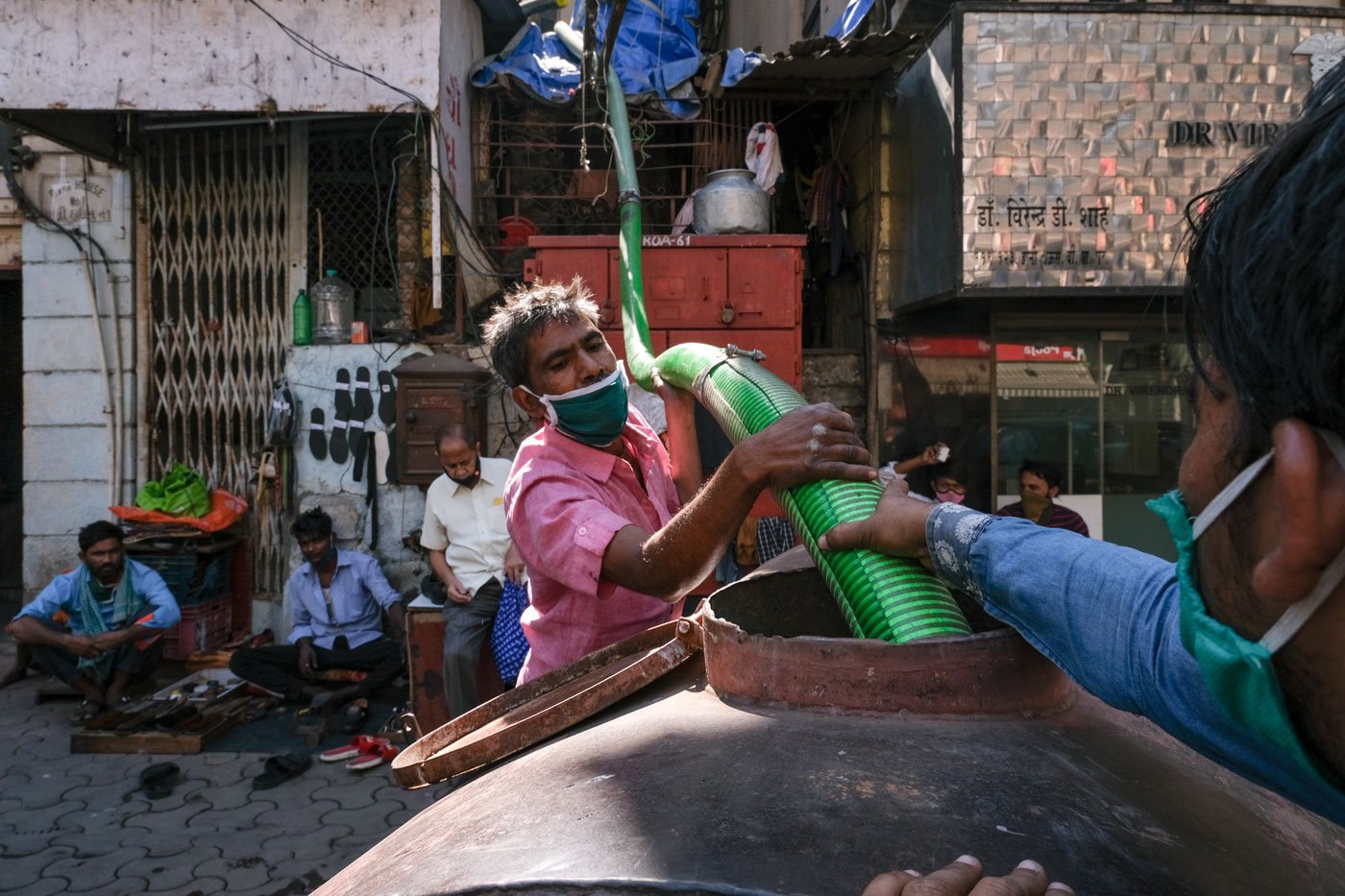 Manzur filling his water cart at Chandaramji High School, in CP Tank area of Bhuleshwar. Temples and schools with wells here sell water to the bhistis 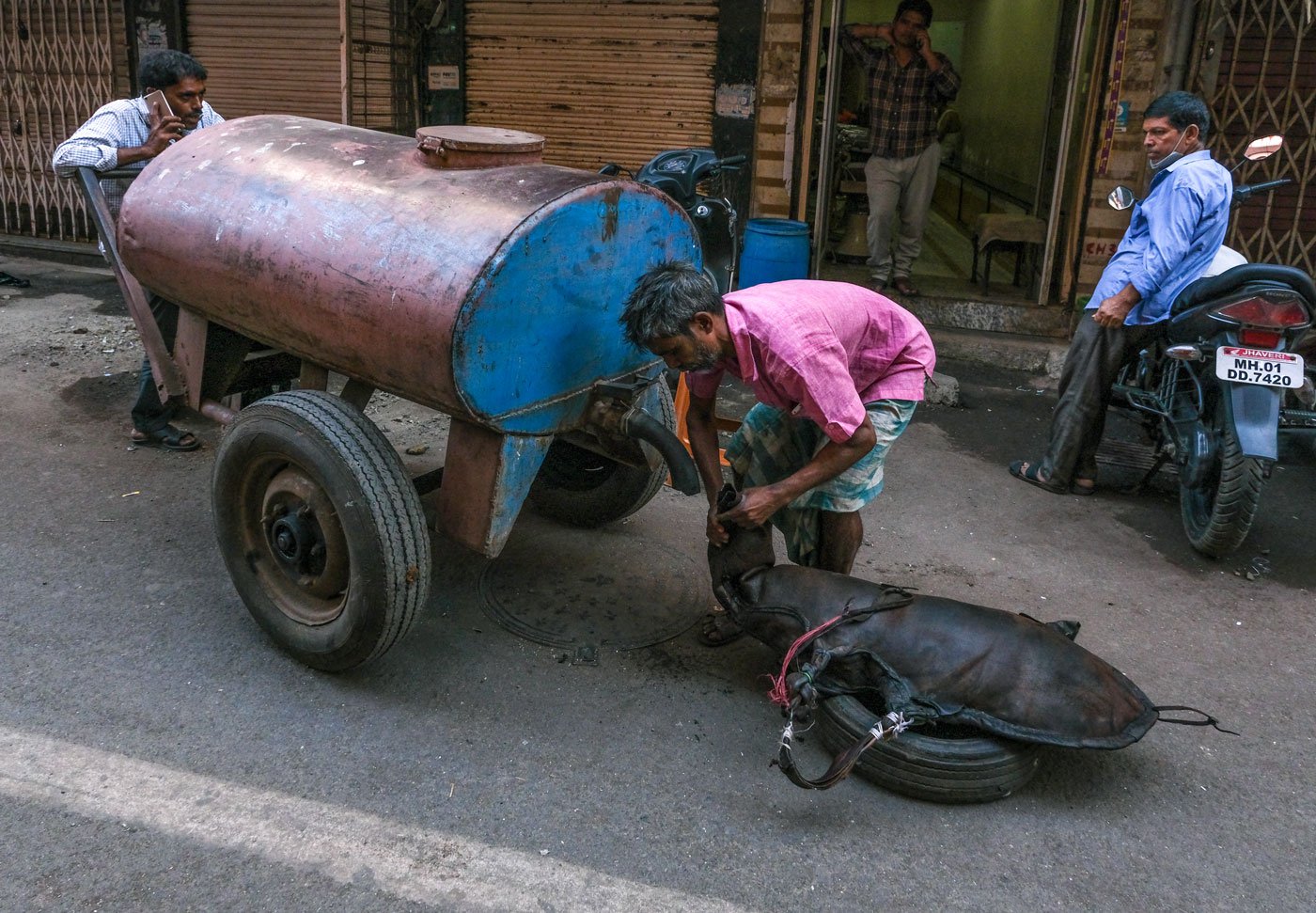 Manzur is filling water from his cart at a delivery spot in Dudh Bazar. It was December 2020, and he was still using the mashak . He would place the base of the bag on a car tyre for support, then hold the mouth to the water outlet and wait until it filled up 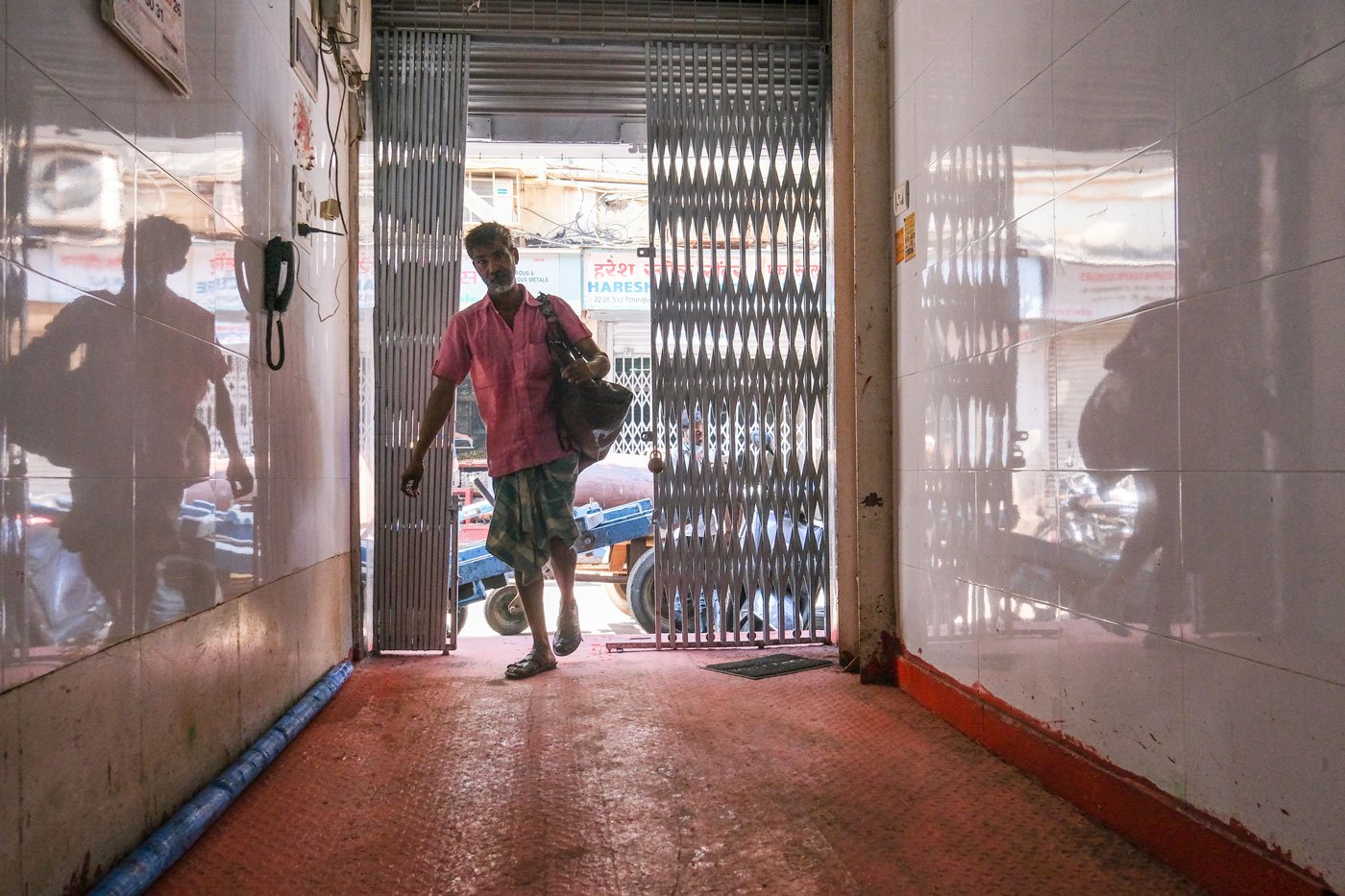 The mashak is worn slung on the shoulder, and its mouth gripped with one hand to balance it 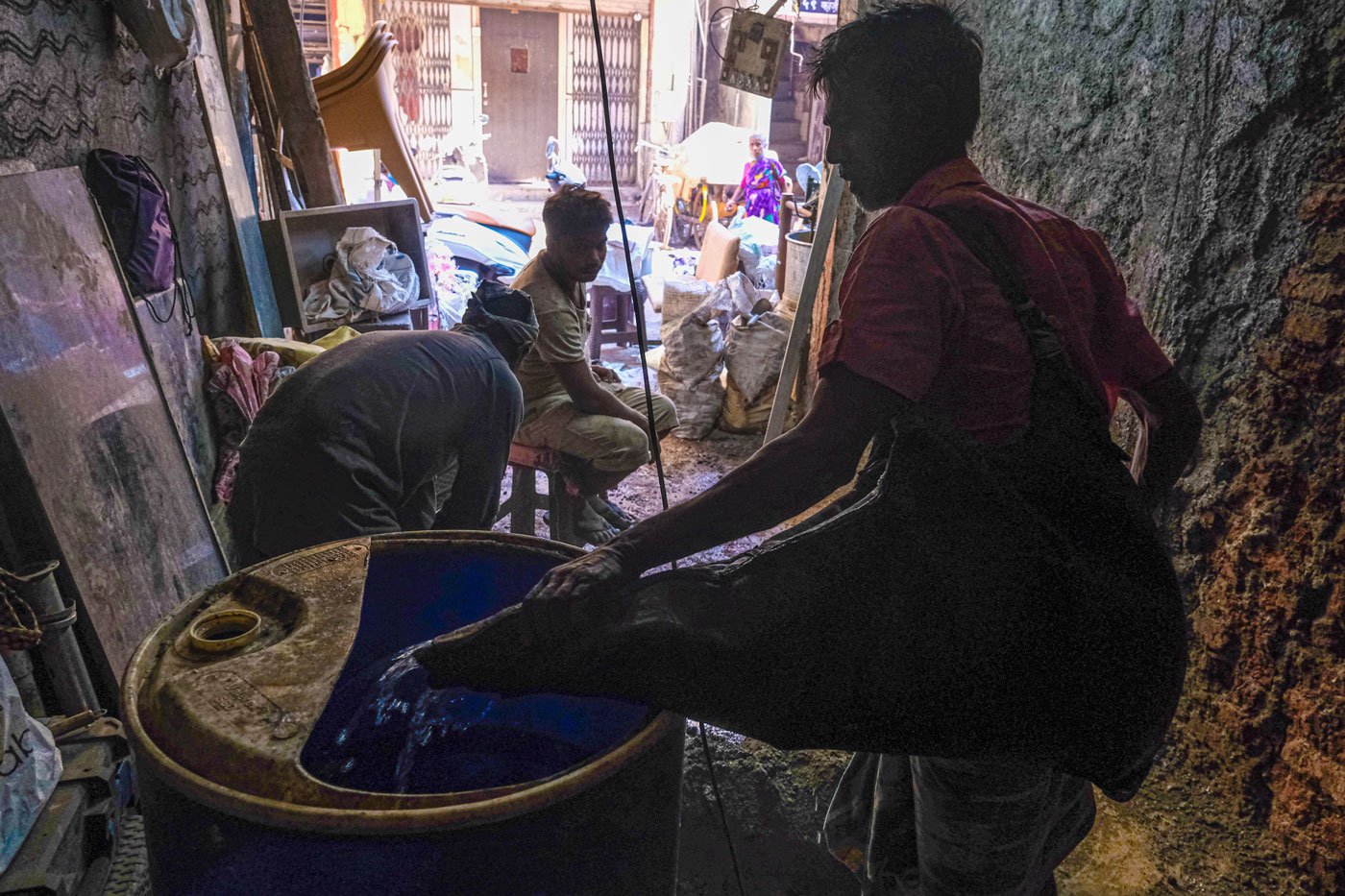 Small establishments in Bhuleshwar ordered water from mashakwalas . Here, Manzur was delivering water to a shop in Null Bazar . He also receives orders from construction sites in the area 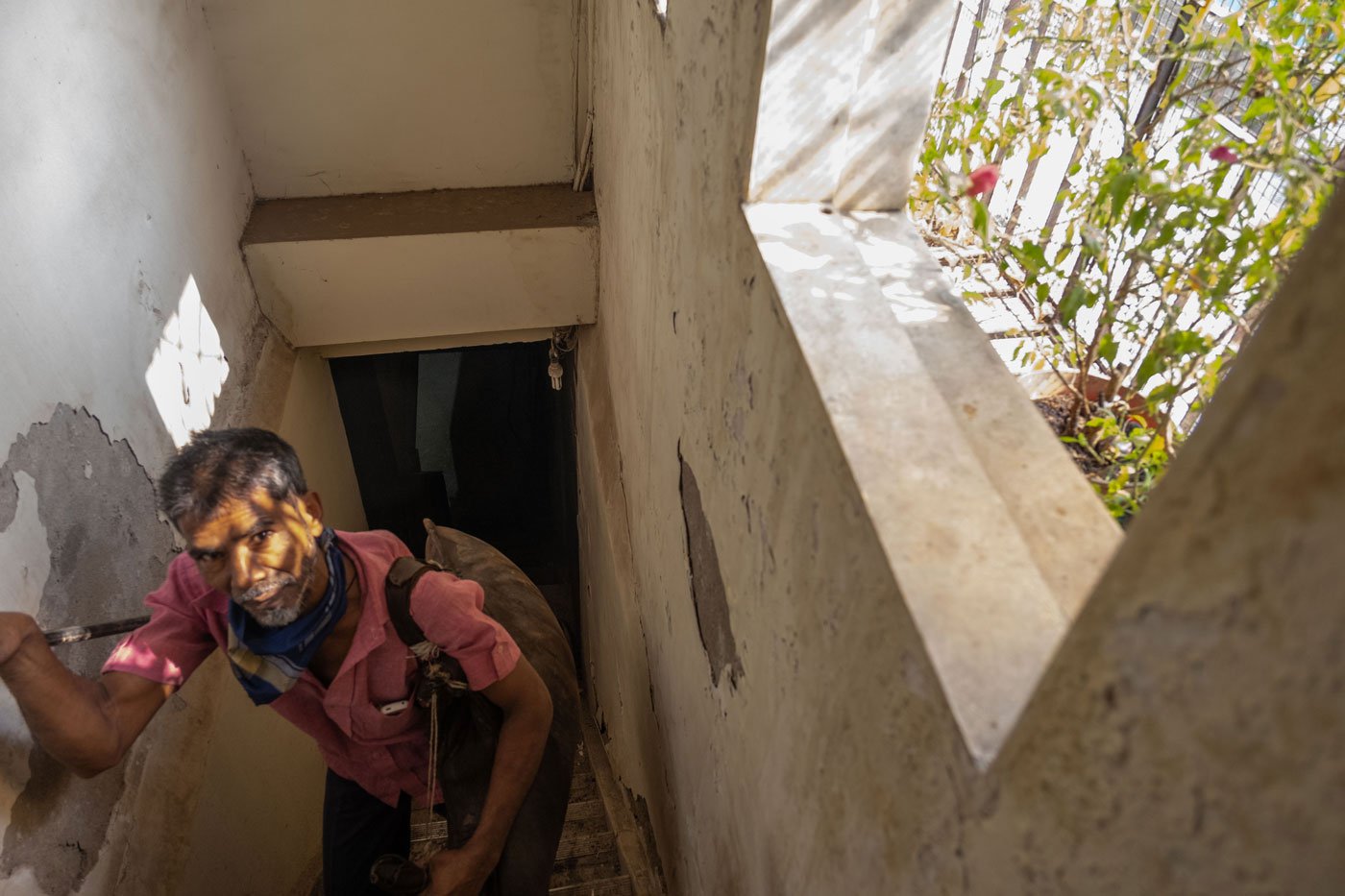 Manzur climbing the wooden staircase of an old, dilapidated three-storey residential building in Null Bazar. He had to deliver 60 litres of water to a resident on the second floor, for which he had to make 2-3 trips up and down the stairs with his mashak 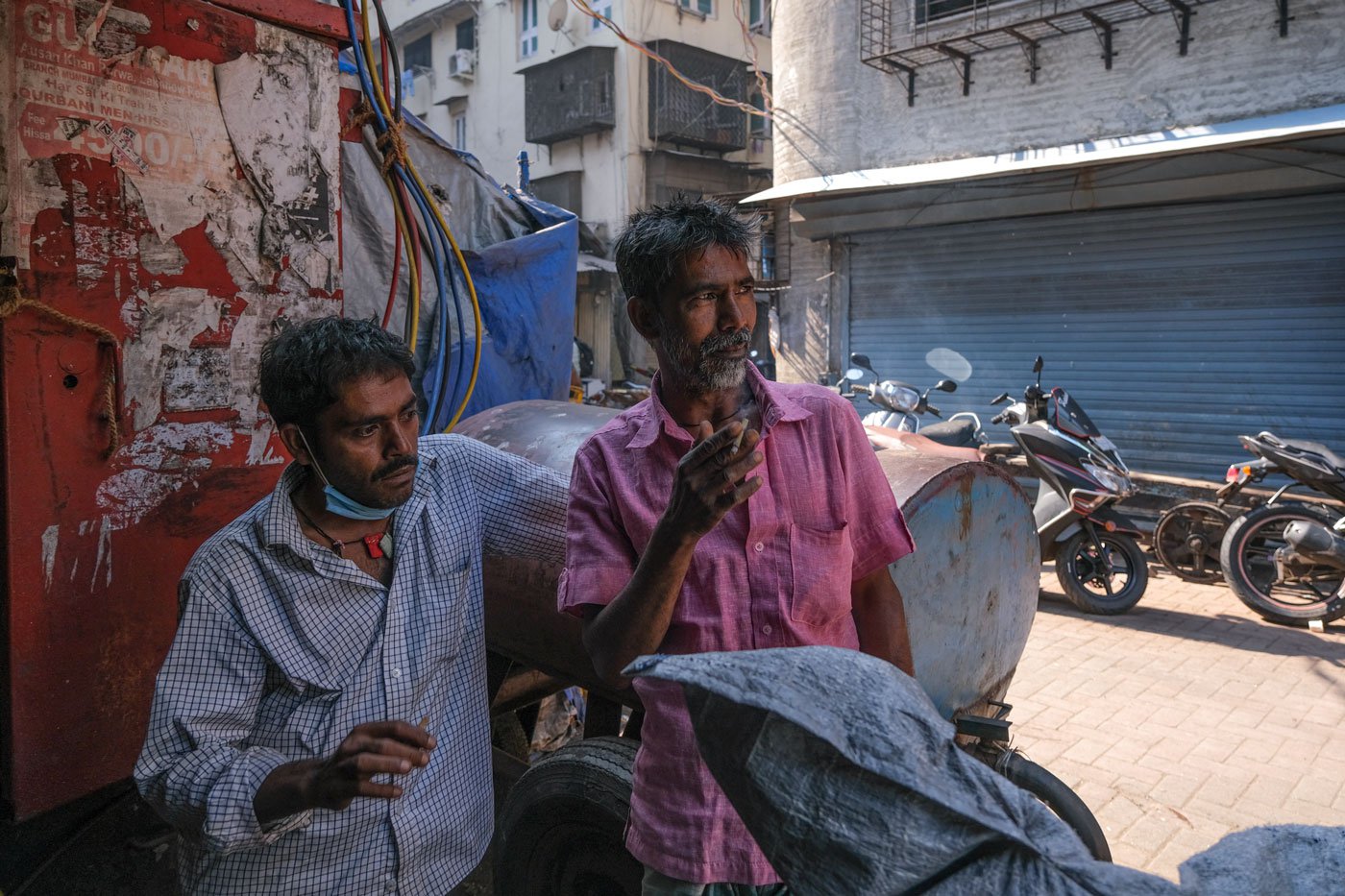 Taking a break from pushing the water cart and distributing water, Manzur and his friend Razzak in Dudh Bazar 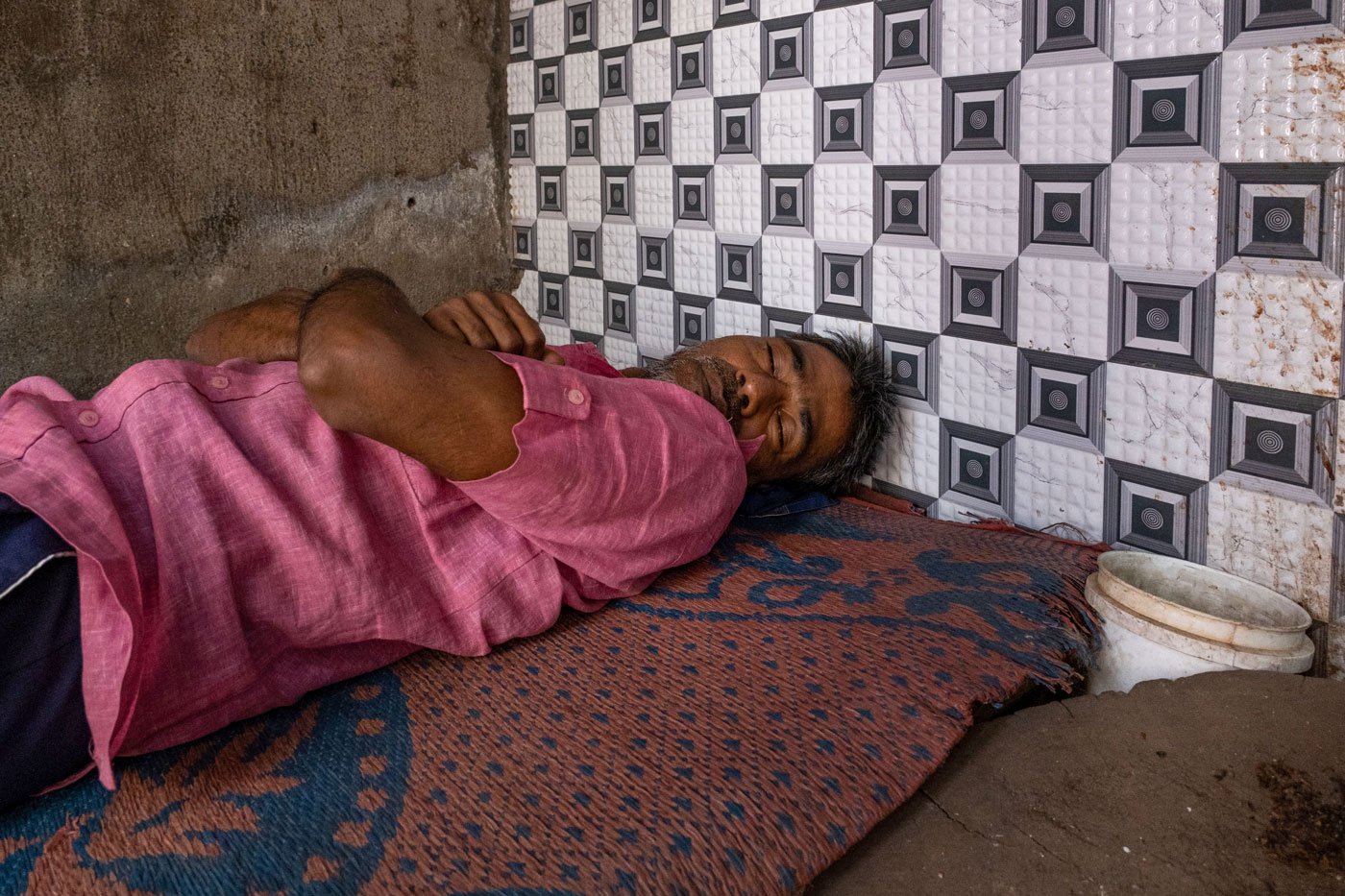 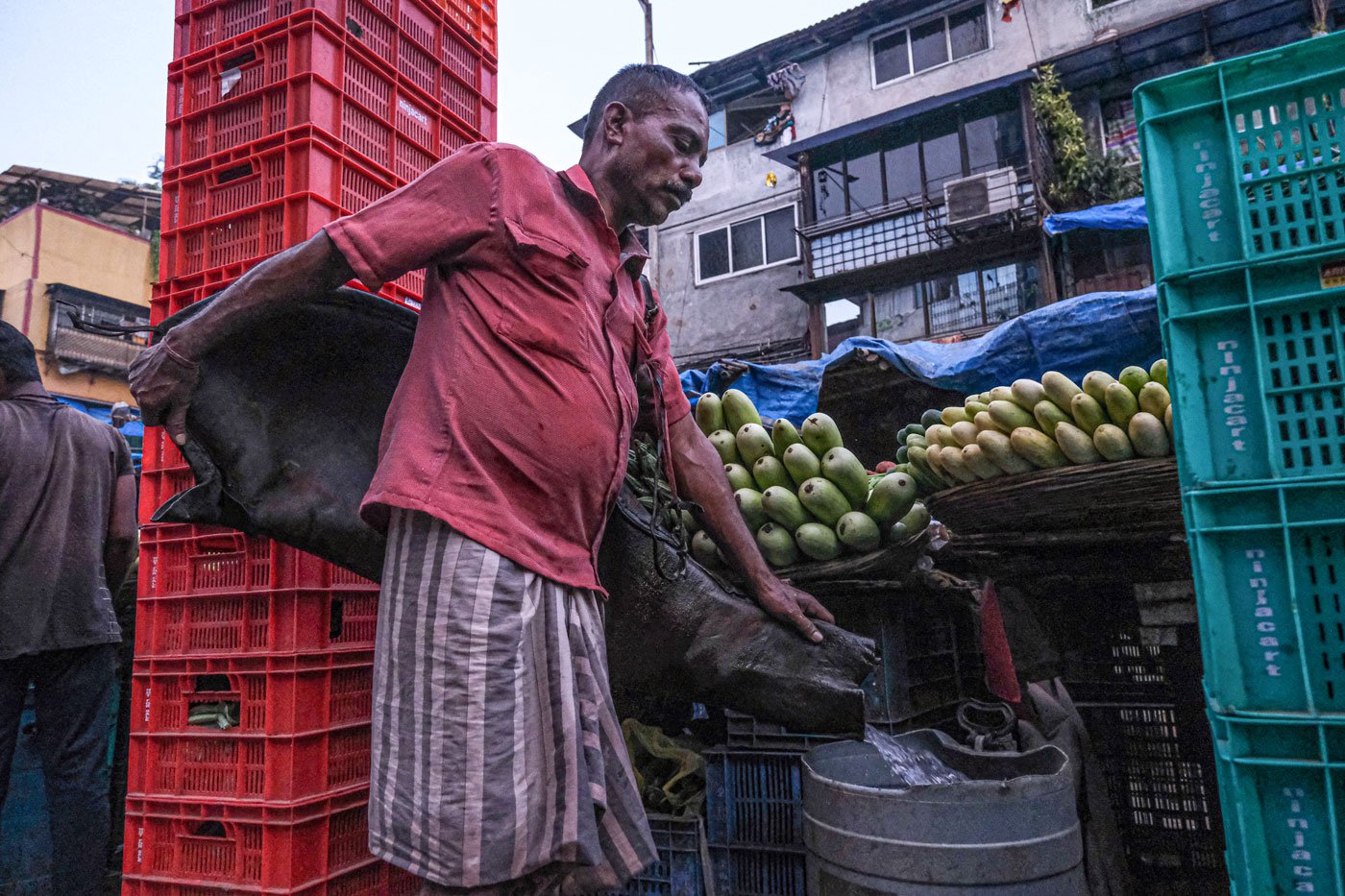 Alam, Manzur's partner in the bhisti trade, supplying water to vendors at their roadside shop in Null Bazar. Every 3-6 months, Alam takes over from Manzur when the latter goes to visit his family in Bihar 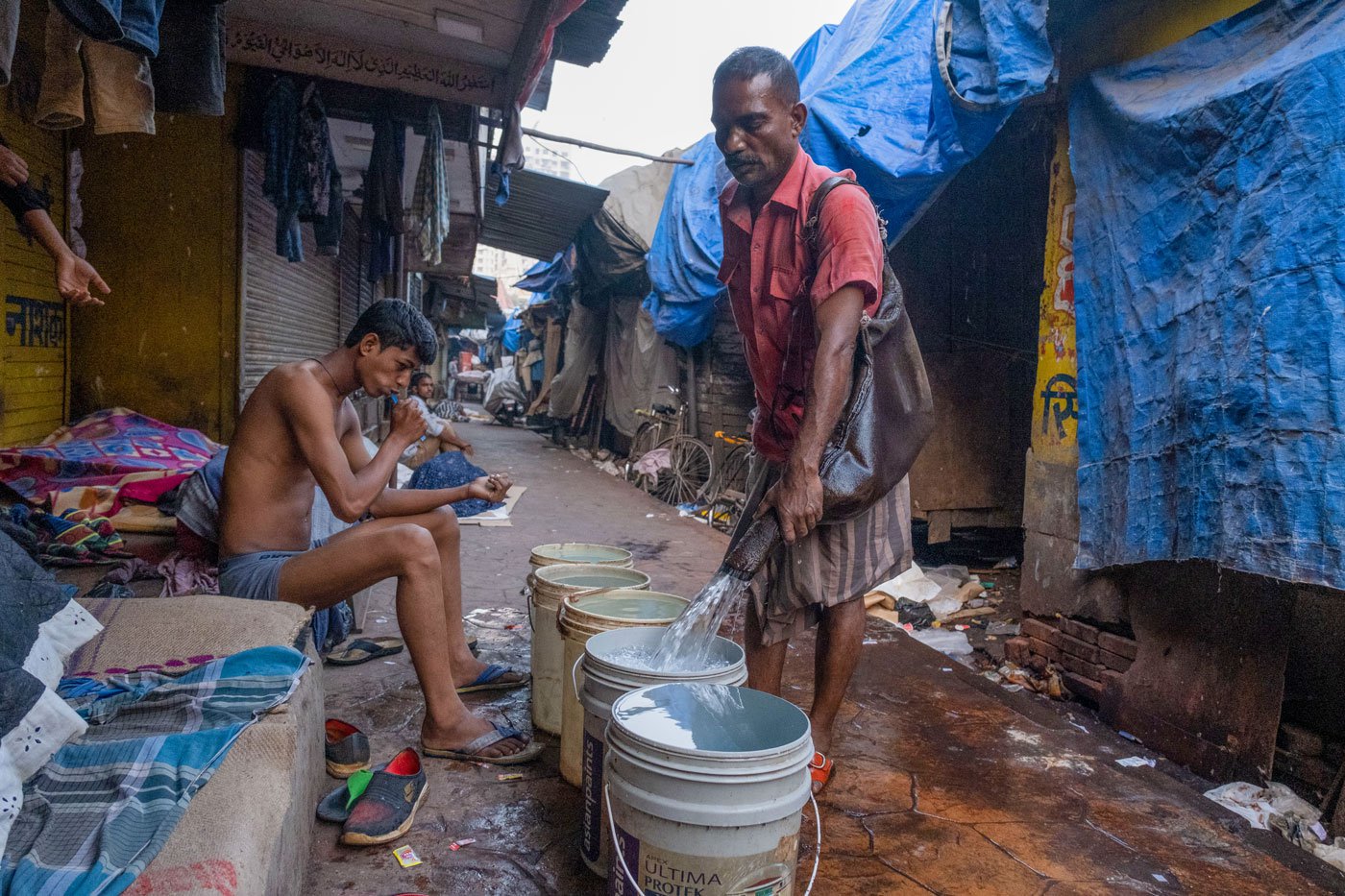 Alam supplying water with his mashak to a labourer in Null Bazar, in January 2021 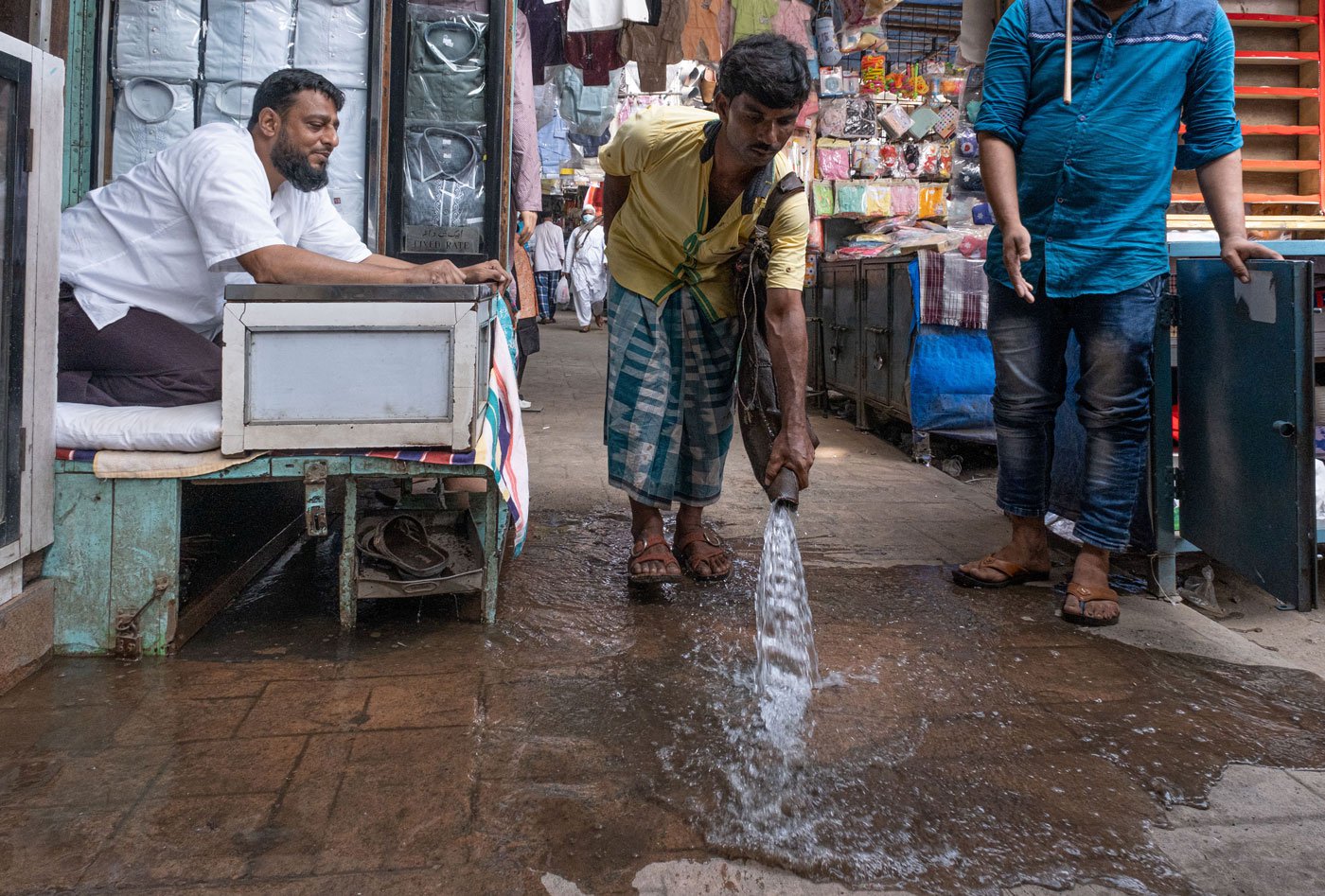 Babu Nayyar is watering a shopfront with his mashak, near Nawab Ayaz Masjid in Bhendi Bazar. He works as a bhisti in this locality. Several shop owners call the bhistis to clean the area in front of their store. Babu, Alam and Manzur are all from the same village, Gachh Rasulpur, in Bihar's Katihar district 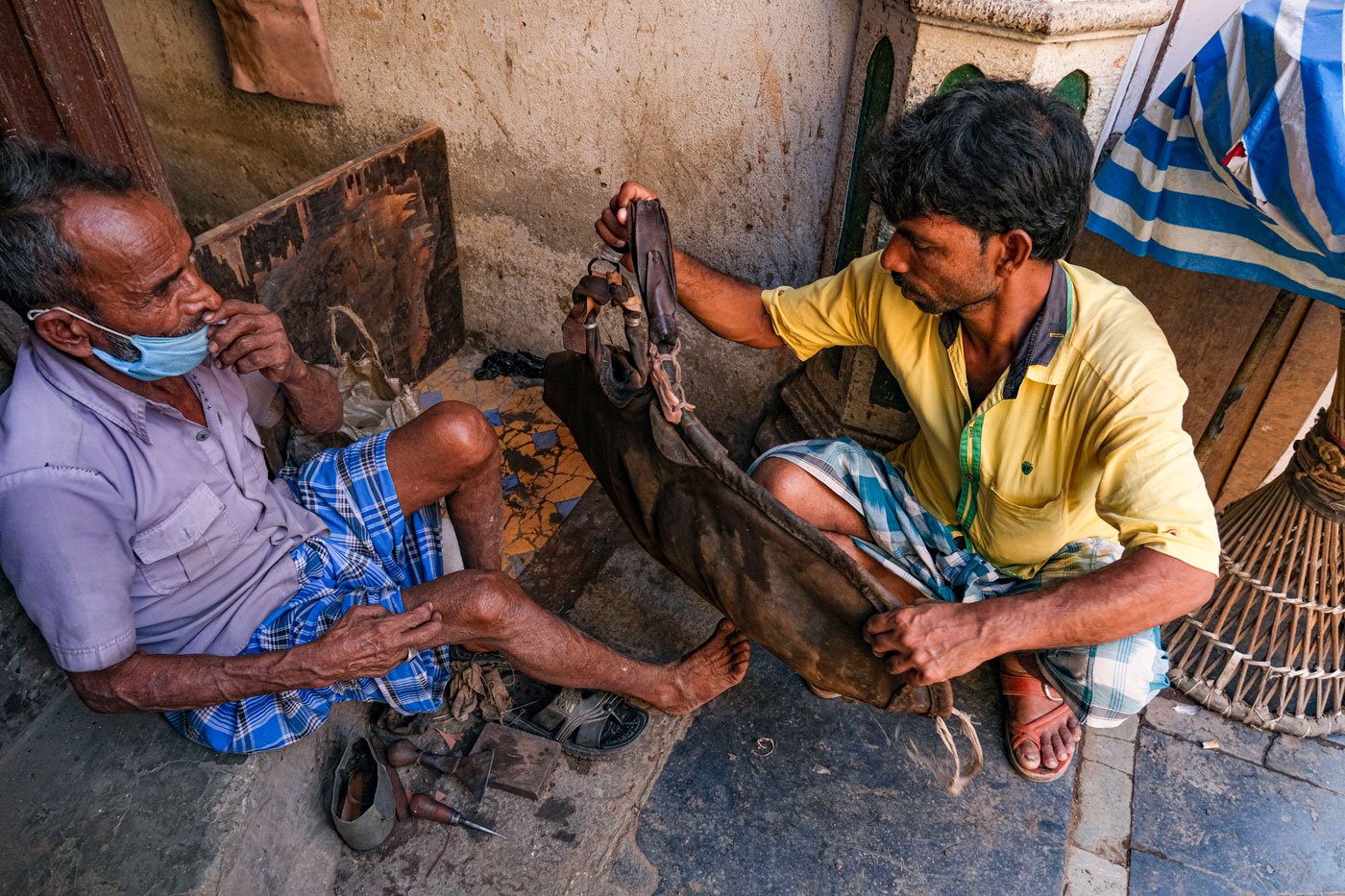 Babu is showing his mashak to Yunus Shaikh (left), in January 2021. The mashak had three holes and needed repair. Yunus asked him to pay 120 rupees for the job, but Babu could only give 50 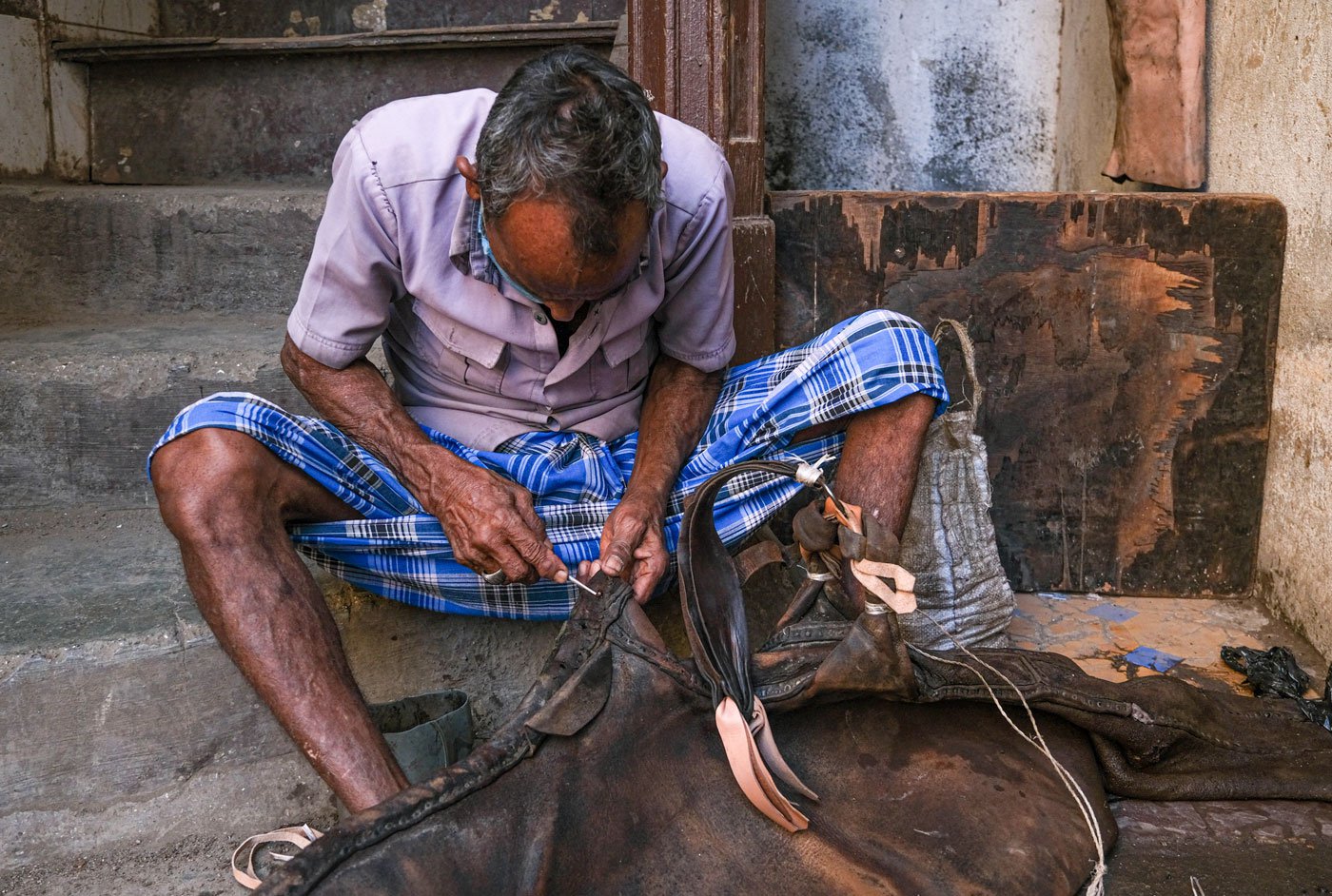 Yunus working on Babu's mashak , sitting at the entrance of a building near Nawab Ayaz Masjid in Bhendi Bazar 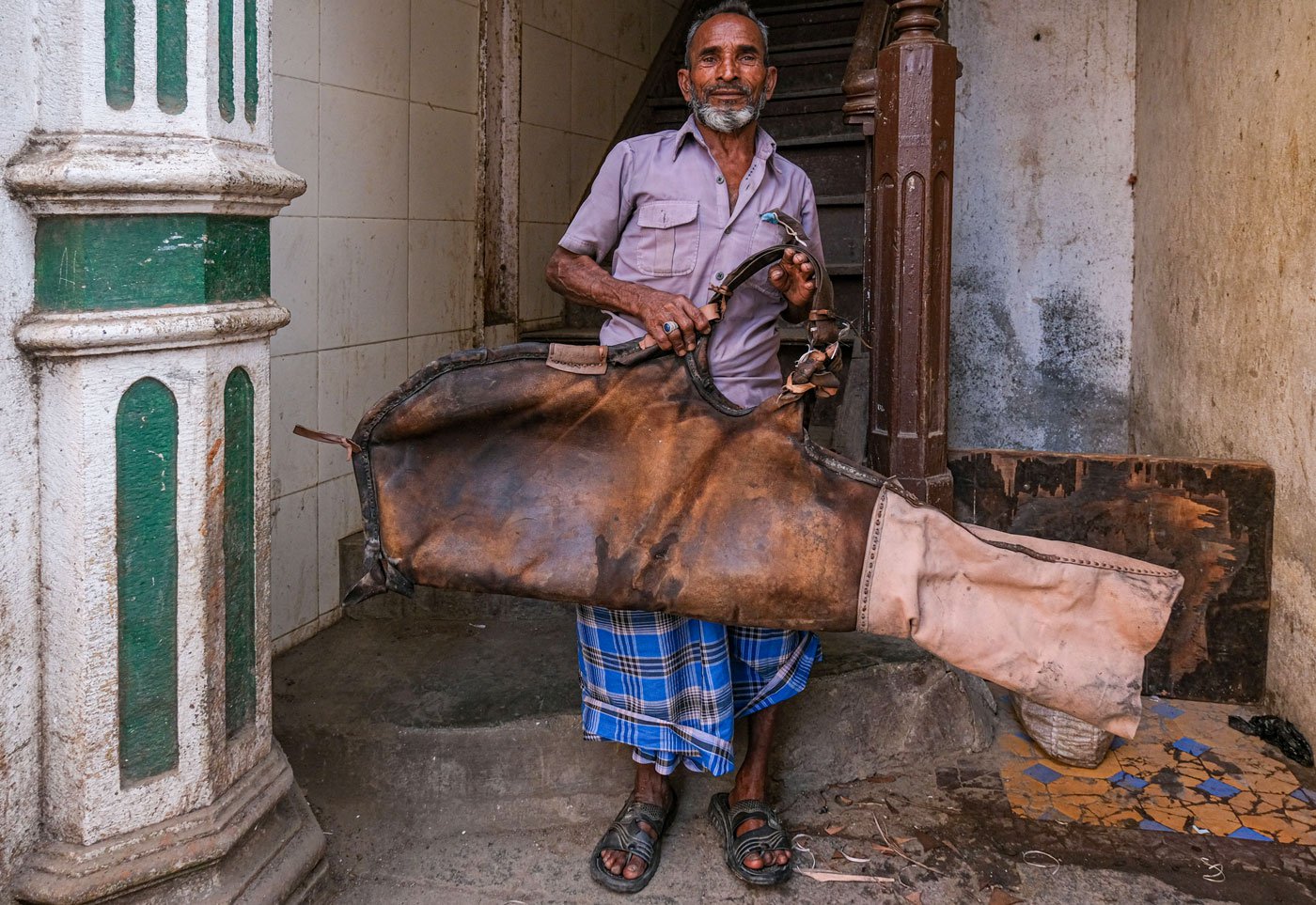 Yunus holding the five-foot-long mashak after repairing it. A couple of months after this photo was taken, he returned home to Bahraich and didn't came back. His income in Mumbai had dwindled, he said, and he didn't have the strength to make and mend mashaks anymore 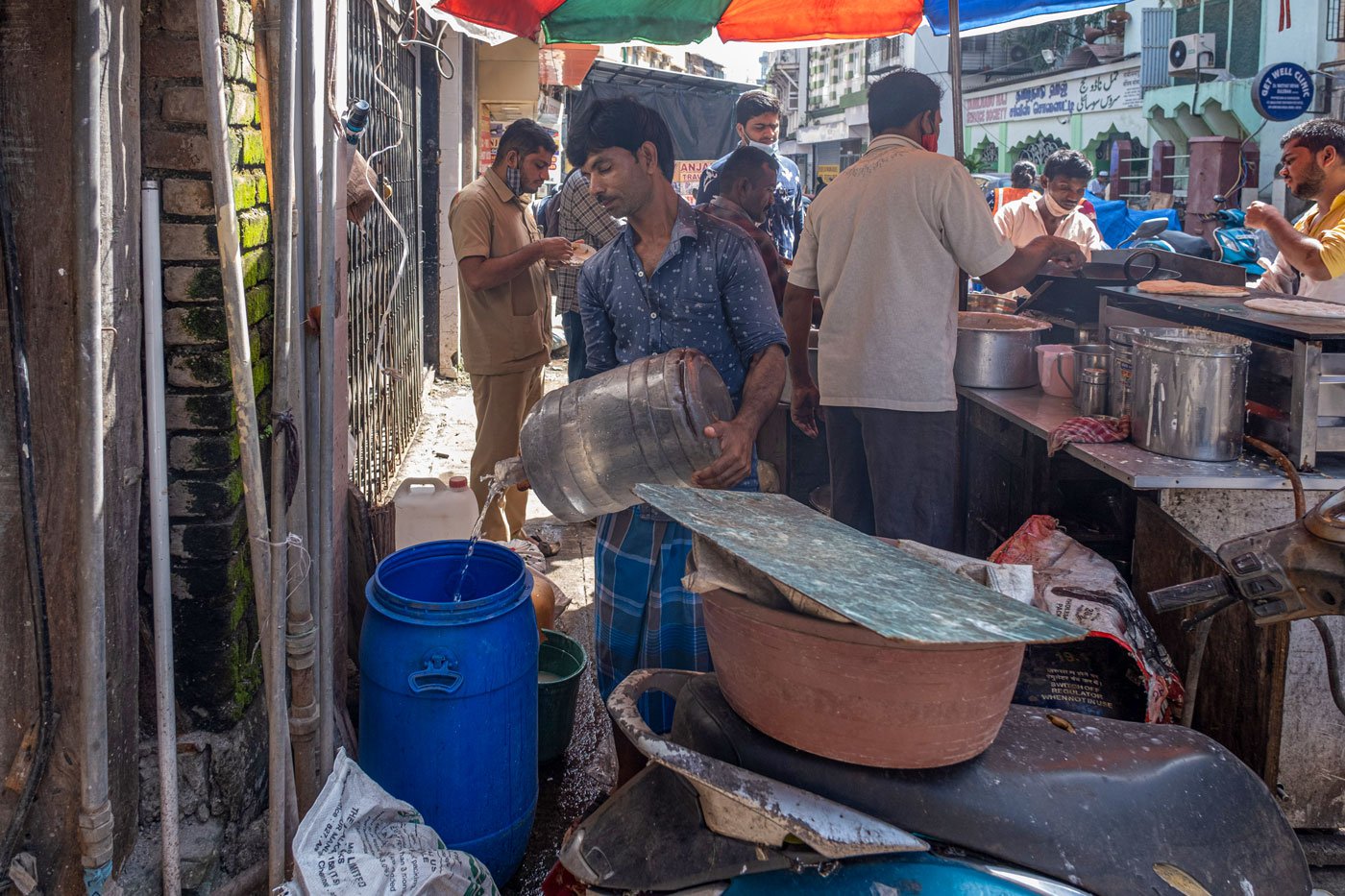 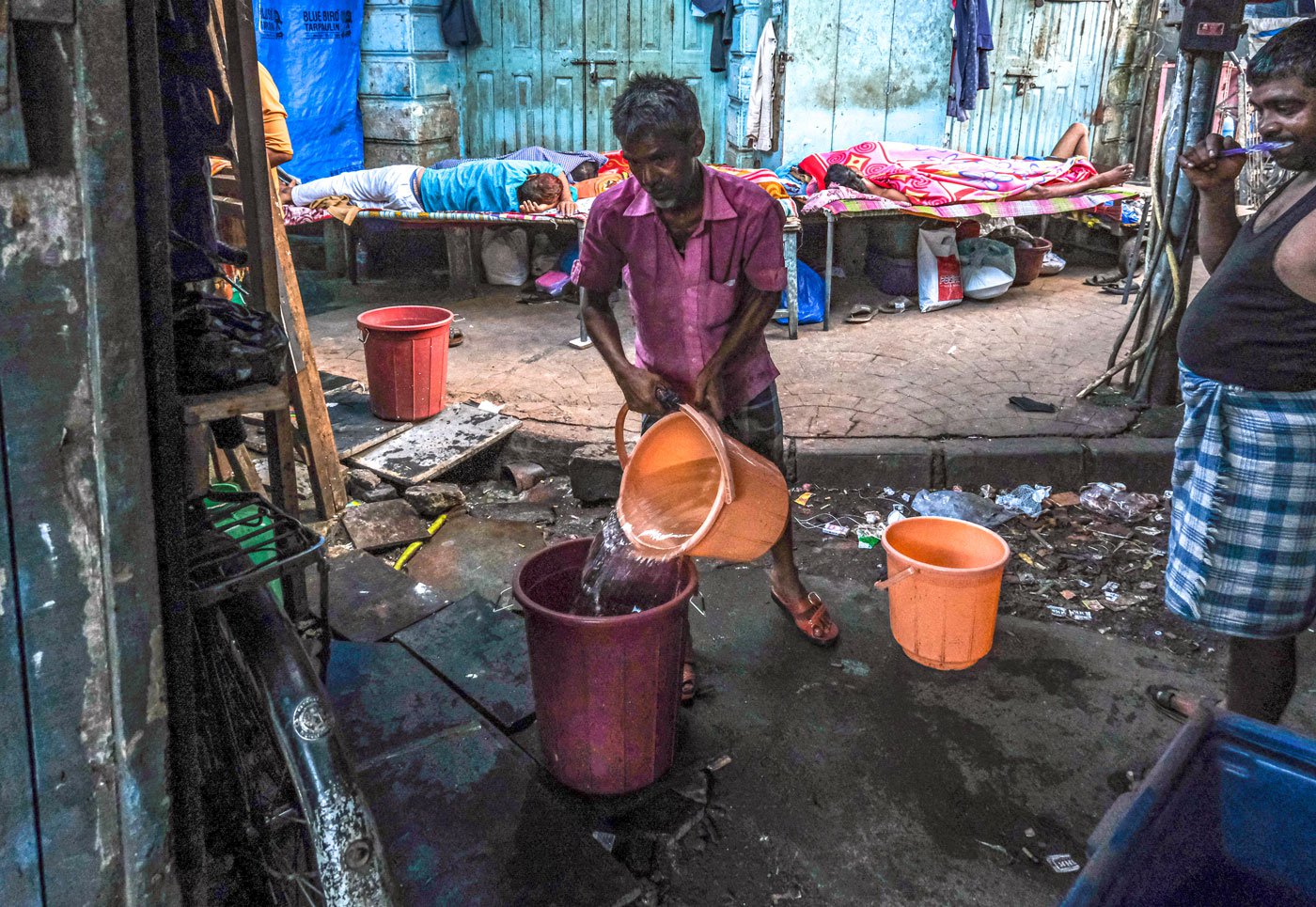 Manzur switched to plastic buckets after Yunus went away as there was no one else to repair his mashak. Here, in January 2022, he has carried water for the workers who work in the small shops of Null Bazar during the day and live on the streets at night 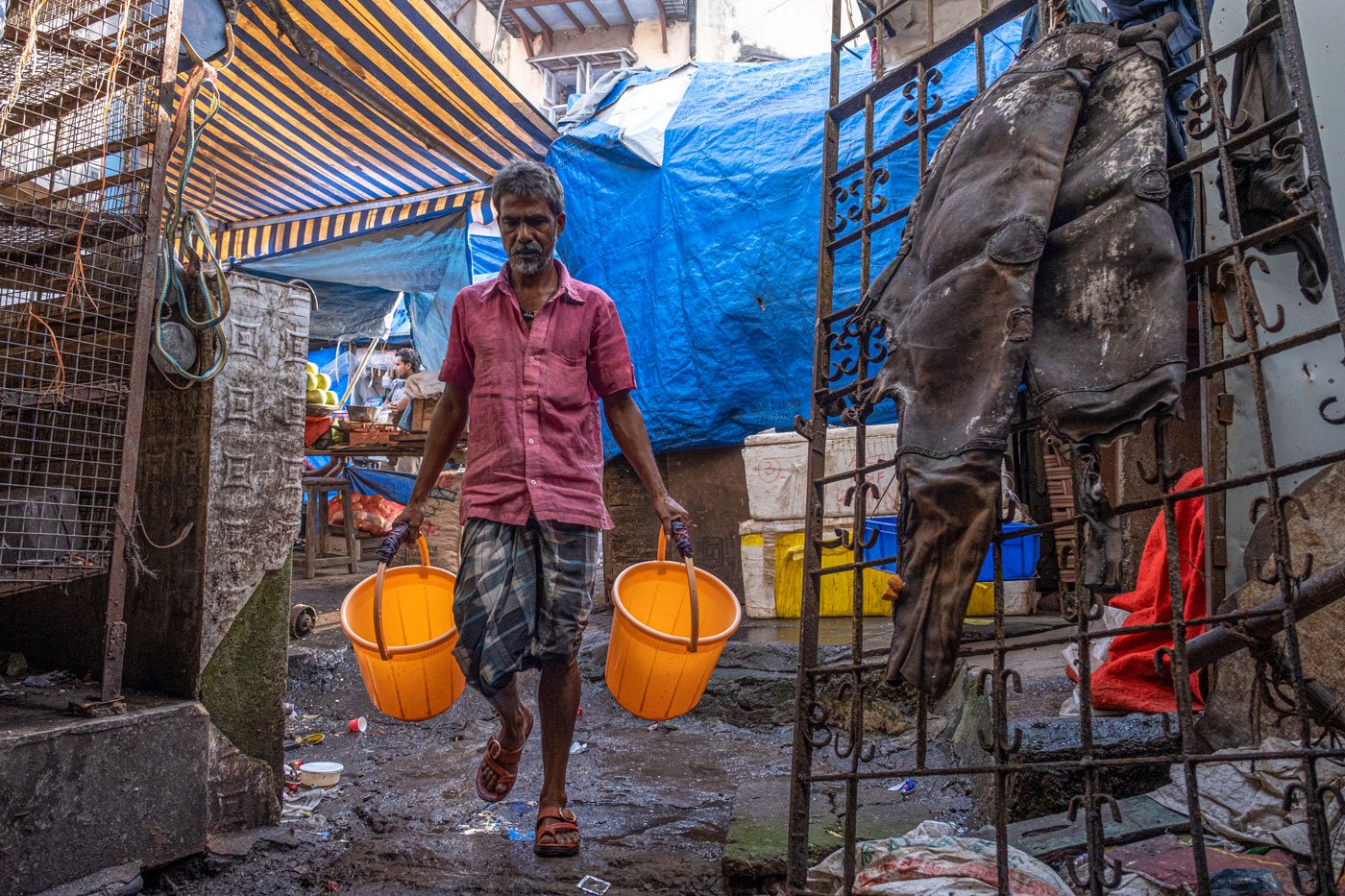 After the delivery, Manzur is returning to his cart to refill the buckets 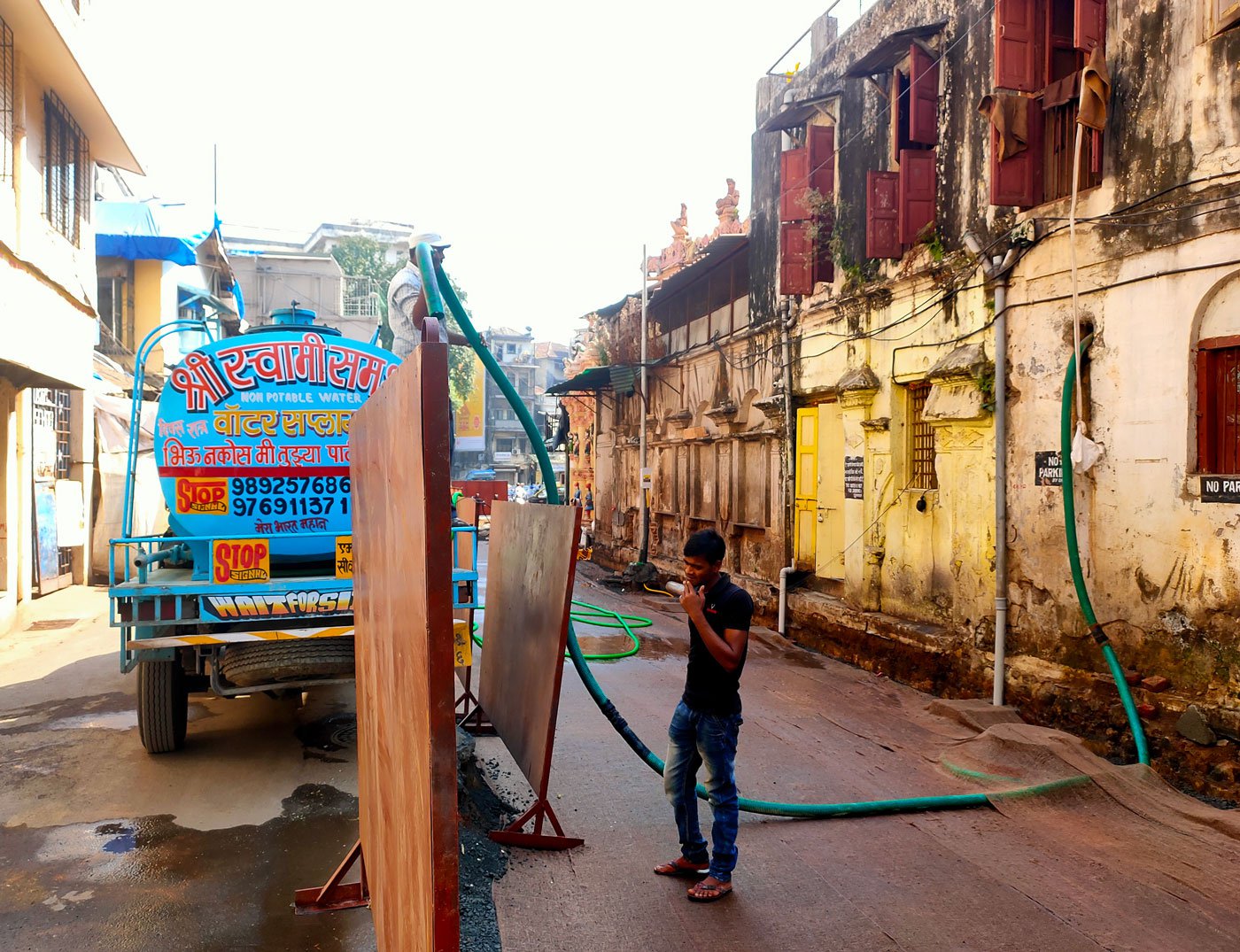 Tankers have taken over the work done by bhistis , directly supplying water to buildings with the help of an electric motor 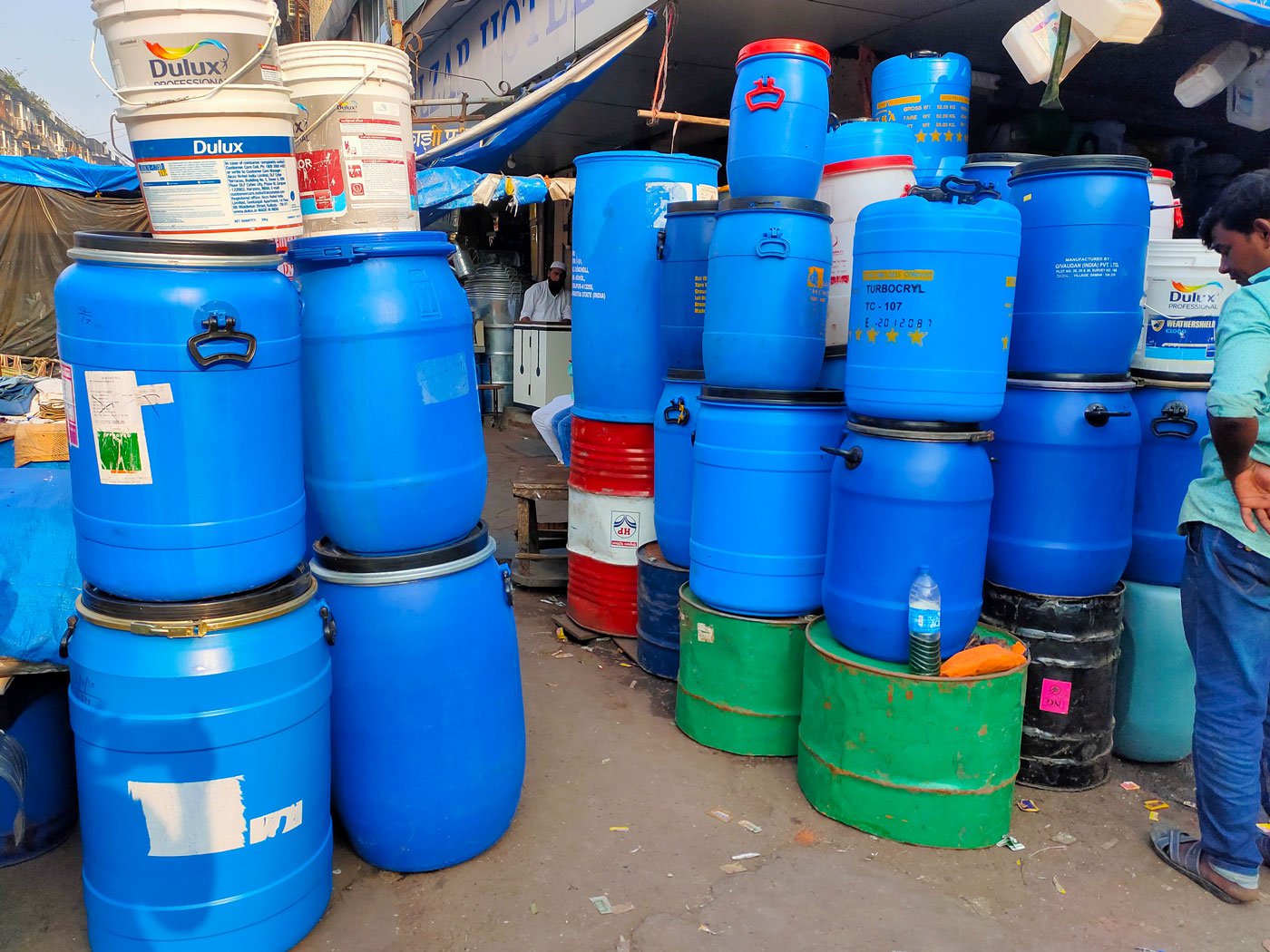 Plastic drums for sale at a Null Bazar shop. They are popular with the bhistis , who are replacing the rented metal water carts with these containers 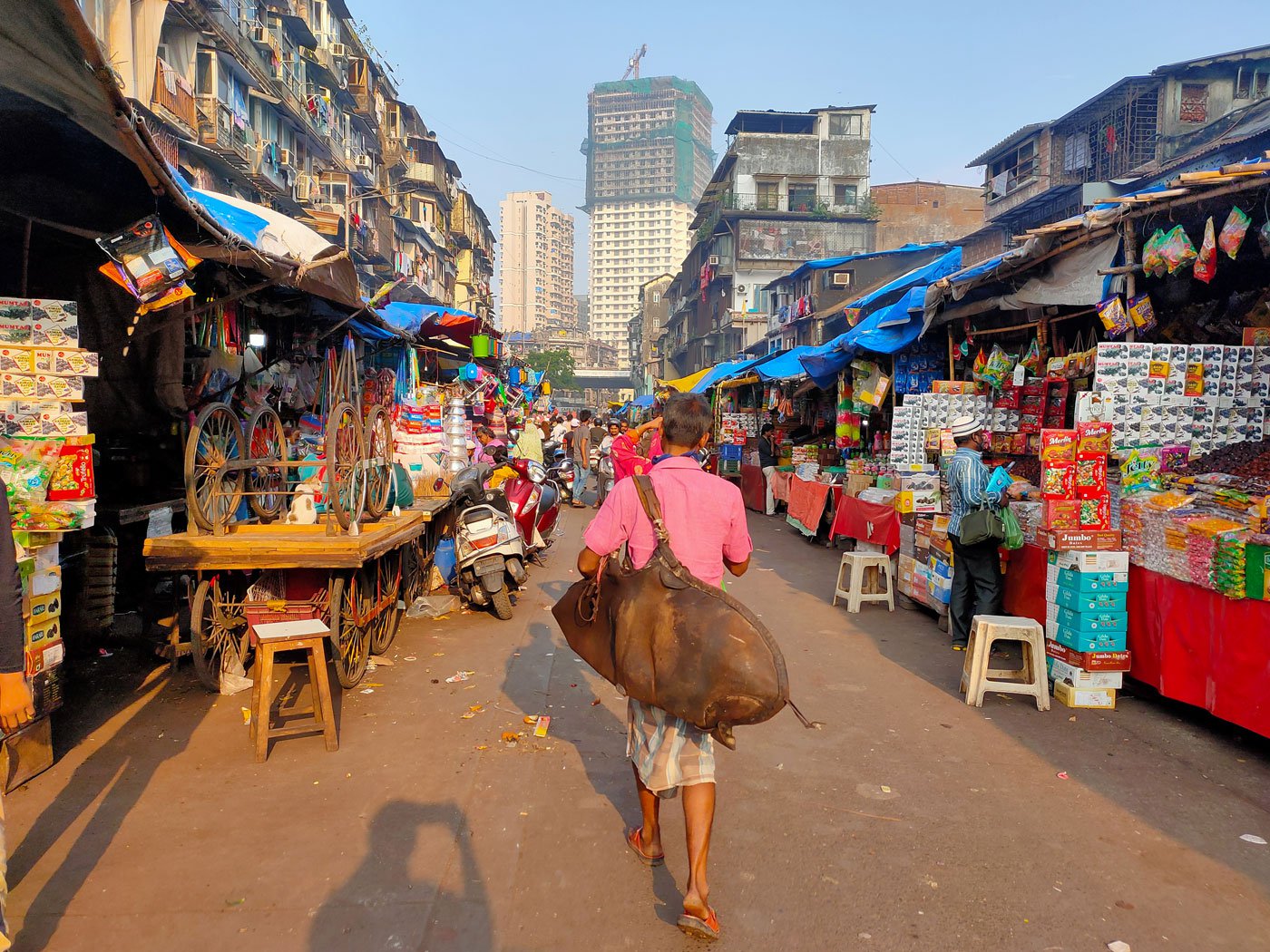 An older photo of Manzur Alam Shaikh with his mashak after delivering water in Null Bazar. ‘The tradition of carrying water in a mashak is dead now’

Aslam Saiyad teaches photography and photojournalism in Mumbai, and is co-founder of ‘Hallu Hallu’ heritage walks. His photography series entitled ‘The Last Bhishtis’ was first exhibited in March 2021 at Confluence, a virtual exhibition on water stories of Mumbai, supported by Living Waters Museum. He is currently presenting the photos as a bioscope show in Mumbai.

Other stories by Aslam Saiyad