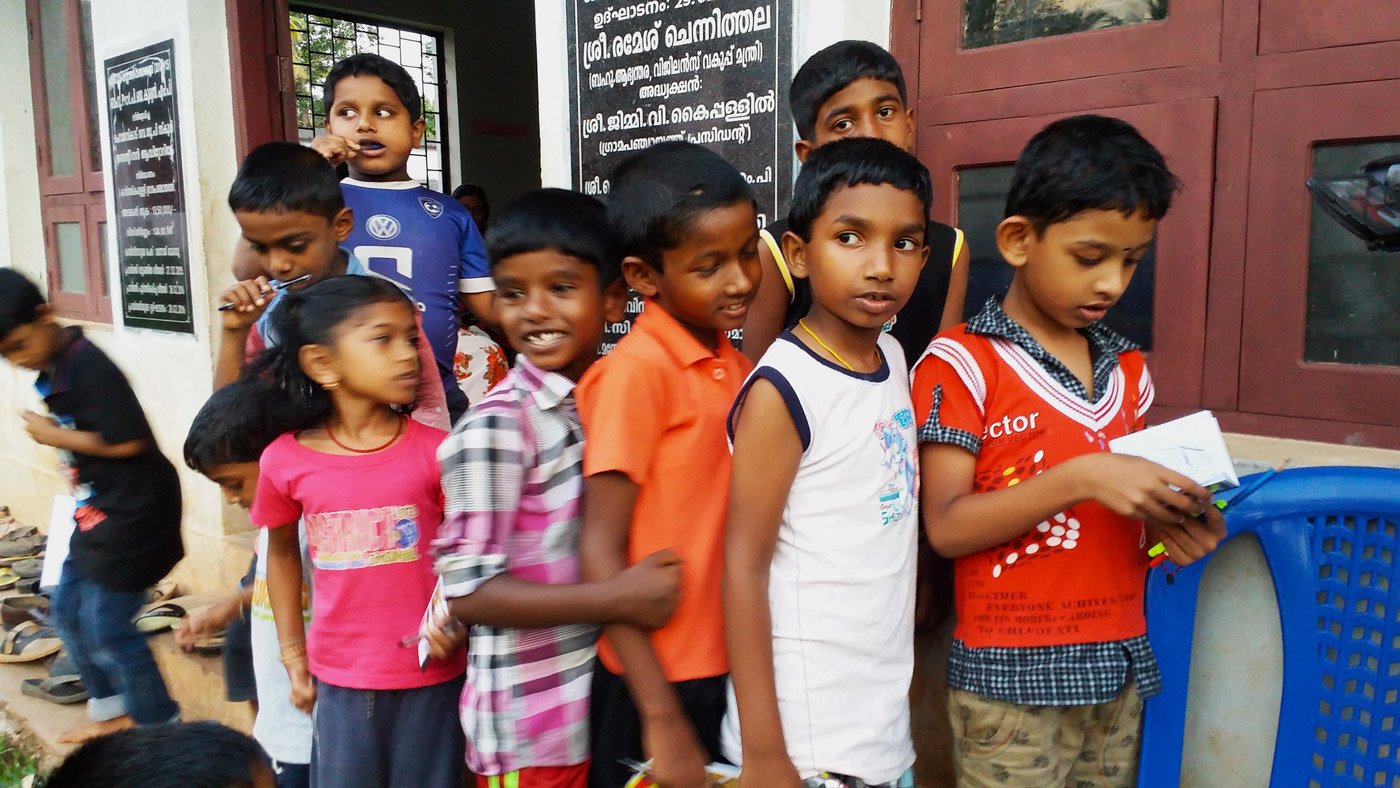 After the recent huge flood in Kerala, children at a relief camp in Alappuzha district were given pens, crayons and diaries. Their pictures and words speak of their fears and prayers, of loss and relief

‘ The highest spot in the place is the temple. The deity stands submerged in water, neck-deep. Water, all around! The local people have gone in search of dry land while one in the family stays back to guard the house. There are 67 children in the top storey of the three-room mansion within the temple. And 356 adults. Domestic animals like dogs, cats, goats and fowls too…’

These are the opening lines from Thakazhi Sivasankara Pillai’s short story The Flood, based on the great flood of 1924.

And in the images drawn by the children, water poured from the sky, flowed in rivers, encircled houses and covered fields. Their artwork spoke of the fearsome flood they had witnessed.

Only, these images were created nearly a 100 years later, soon after Kerala’s worst flood in a century following unprecedented rains in July-August this year. 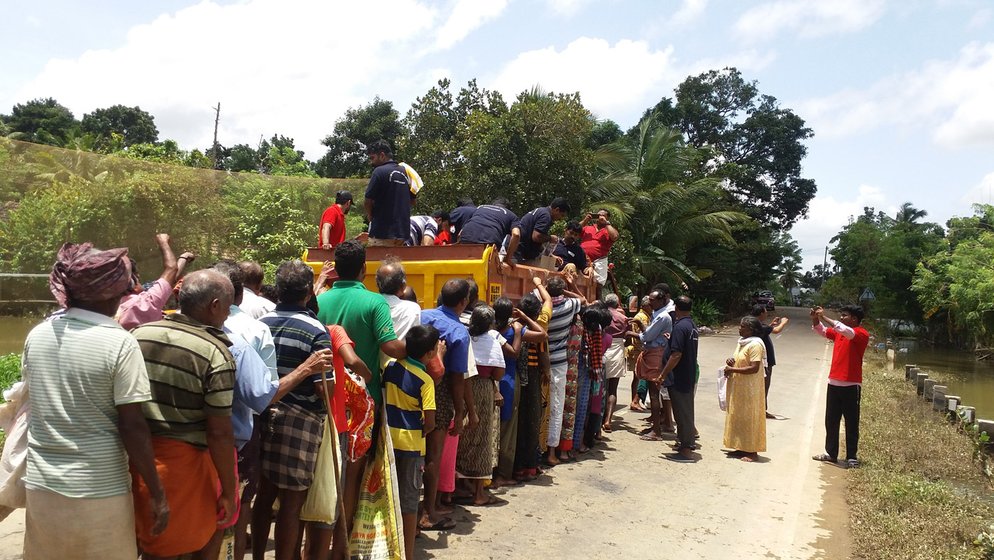 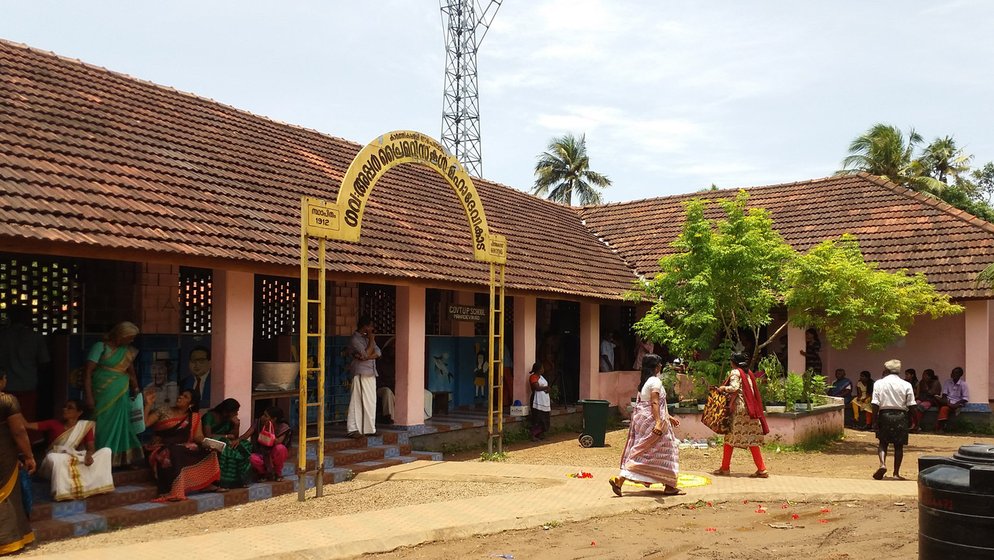 Left: Several organisations brought food and water to the villages . Right: A government school in Mahadevikad village became a shelter for 362 flood-affected families

I visited the camp at the government upper primary school in Mahadevikad village of Karthikappally taluk on July 28. Long ago, this was a school I attended; in July and August 2018, it became a shelter for 362 flood-affected families.

Among those at the camp were 23 children of agricultural labourers from nearby villages. Most of them were gloomy, as was the camp. I brought painting materials to the school the next day. Curious, the children gathered around as I distributed the sheets of paper, pens and crayons. Soon, they drew and coloured houses, fields, the sun, birds, trees, clouds, butterflies, plants, humans… and water. Some mothers, on seeing their children’s pictures, wept. 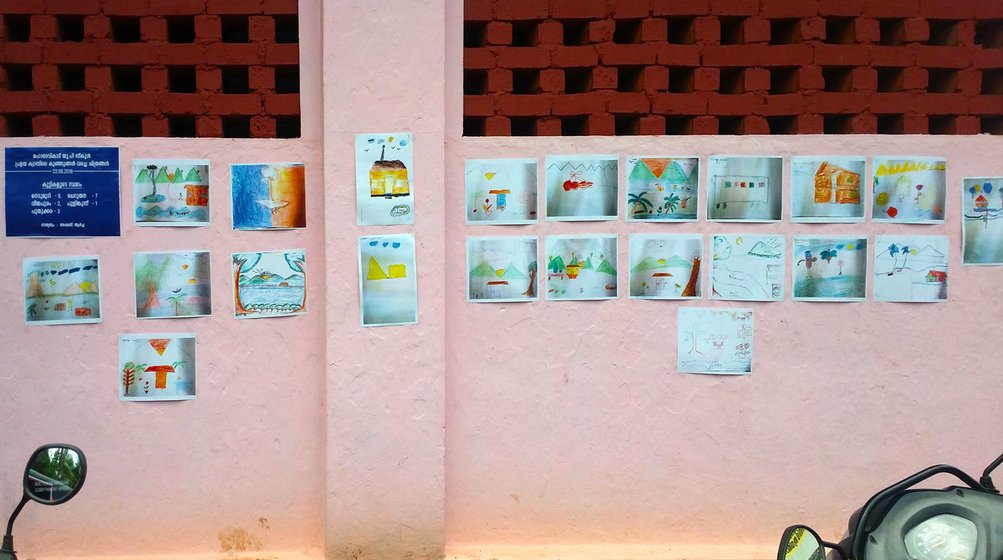 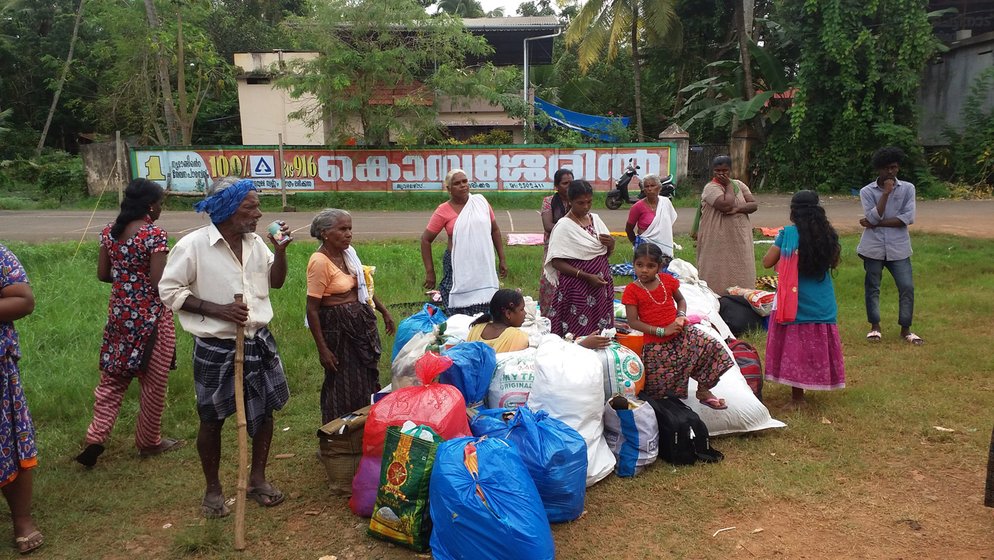 Left: The kids' drawings were displayed on the school's walls on Onam day, August 24. Right: After the waters receded, some of families began moving out of the camps

We displayed the sketches on the school’s wall on August 24, the day of the Onam festival – muted and sombre this year, the colourful images somewhat brightening up the day.

The children also wrote about the flood. These are the translations from Malayalam of some of their diary entries:

Diary of a flood

“Slowly, the water began to surround us from all the four sides. It reached our house as well as the junction. Rescue workers arrived in a big fishing boat and evacuated all of us. We did not have the heart to leave our house, but feared that water would rise even more, so we accompanied the rescue workers. We were dropped off at Payippad bridge, took a KSRTC [Karnataka State Road Transport Corporation] bus, and got down at Mahadevikad school. As soon as we got here, we were given food and clothes. We ate and went to sleep. The next day, we were given upma for breakfast and rice for lunch. We ate rice for dinner too and slept again. We get food all the time. And we have stayed happily in the camp.” 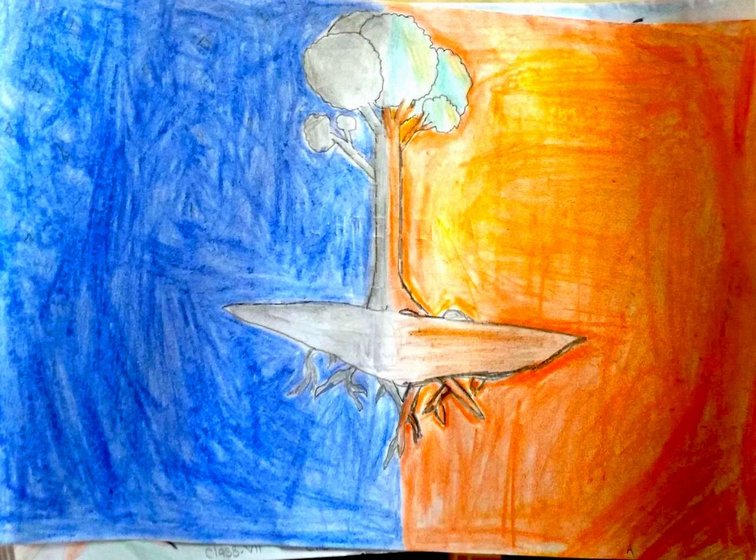 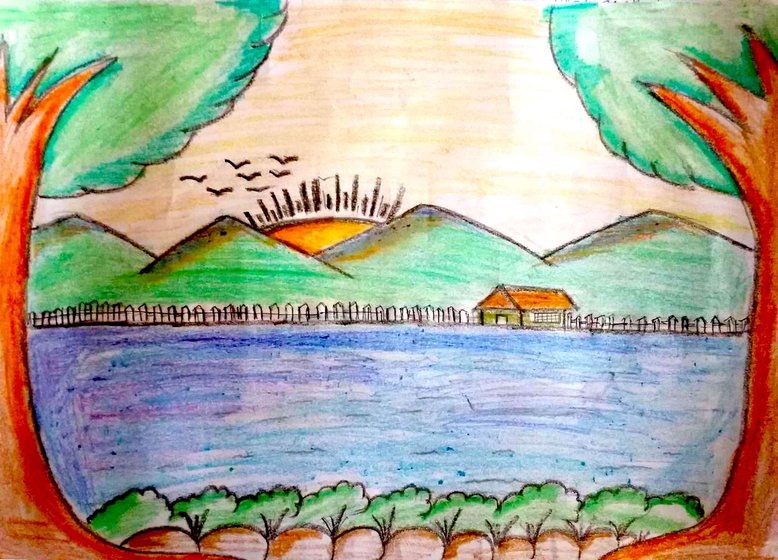 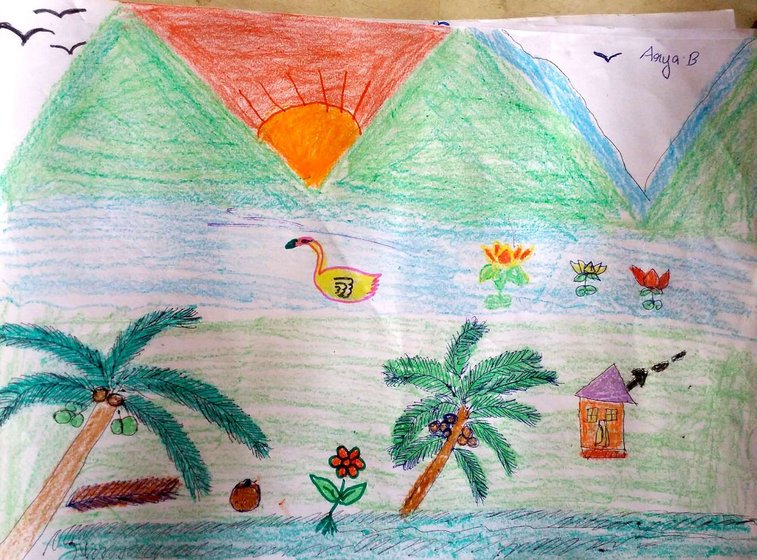 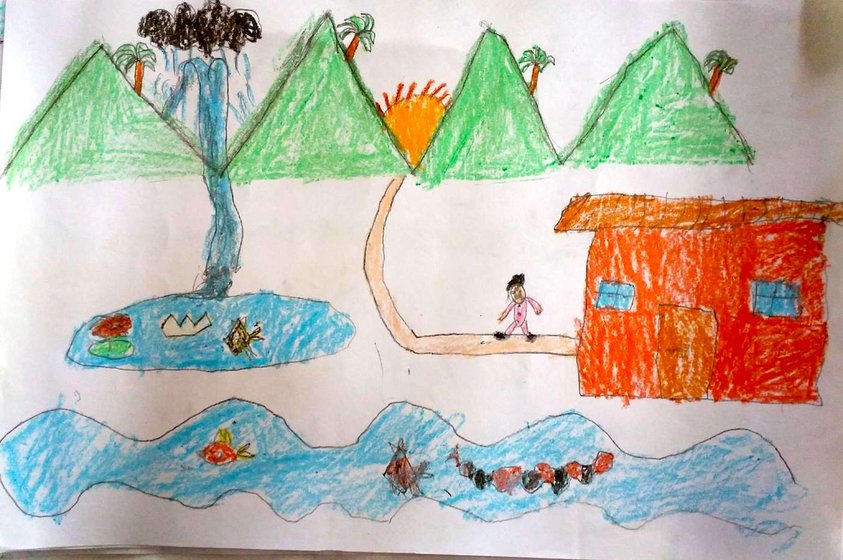 “My house was flooded on Independence Day. As the water entered my home, I was delighted by the prospect of holidays. My father and mother kept the household items in a high place, above the floodwater. But when our cot got submerged, we went to our relative’s house, which is at an elevation. Soon, it began to flood there too. When we left, the water was neck-deep. When we reached the Cheruthana river, we found our neighbours on the bridge waiting for the rescue boats. The journey in the boat was frightening and I cried in fear. I prayed fervently. From the Cheruthana bridge, we took a bus and arrived at this school.”

“The flood gave us many difficulties. All the things in our house are under water now. 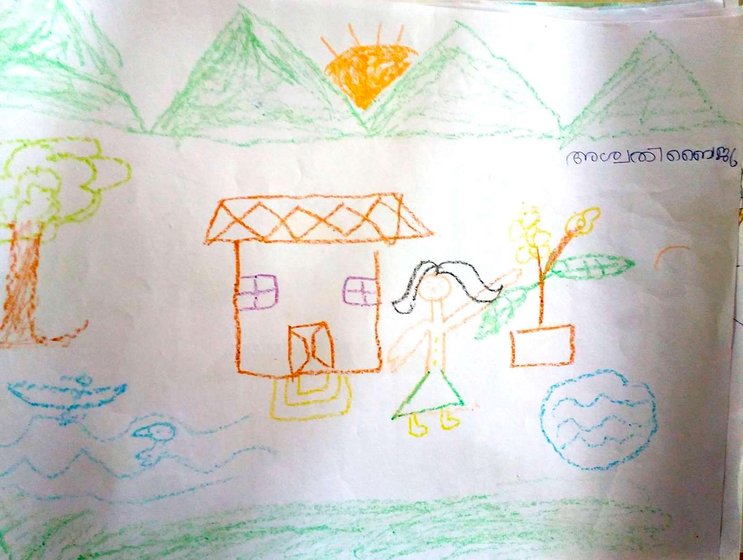 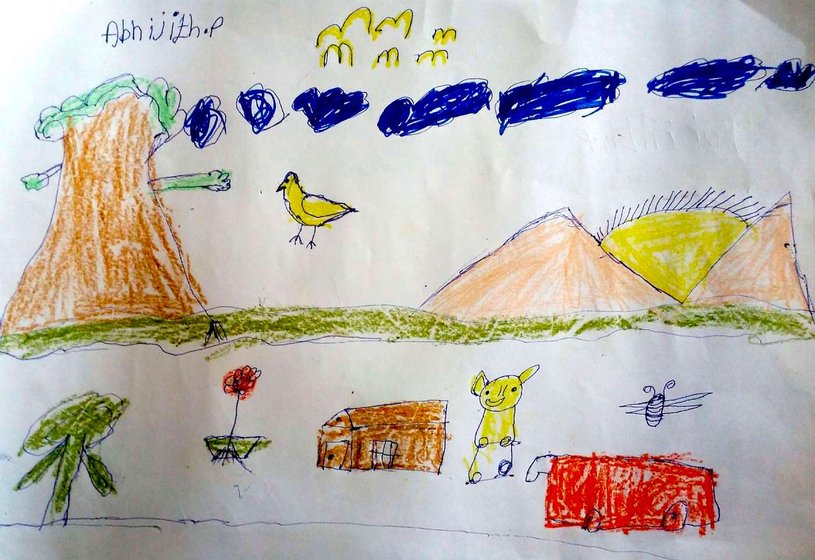 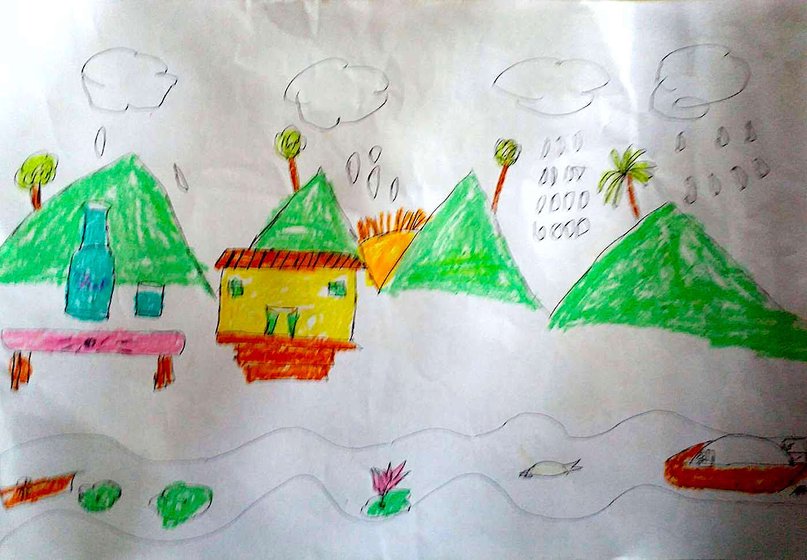 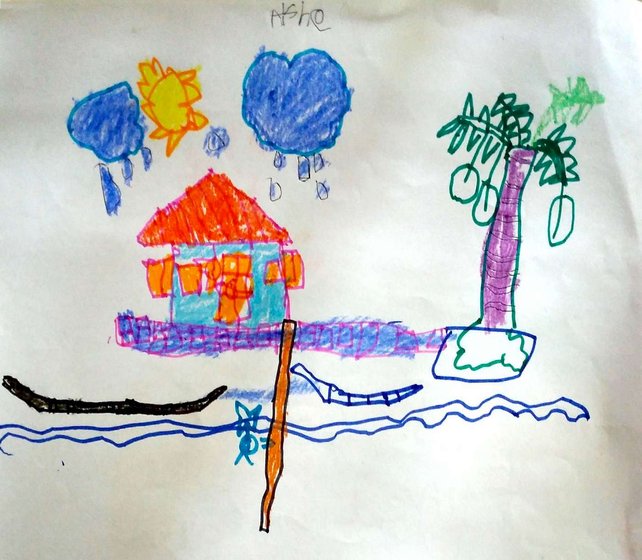 “I could not go to school on August 15 – our house was flooded. I thought the water levels would come down. They did not. The water began to rise slowly, slowly. In the evening, it was still the same. It was our good fortune that the water did not rise at night. At 6 the next morning, the floodwater began to enter our house again. It came into the kitchen first, then our hall, the rooms… everywhere. When the water had filled half of our second room, we went to our grandpa’s younger brother’s house. We stayed there for two-three days. On the third day, our relatives arrived. That same evening, my father’s brother’s house also became flooded. All of us went to Cheruthana bridge in two batches and in rescue boats. We were dropped near the Payippad bridge. Later, we got into a KSRTC bus. When we arrived [at the Mahadevikad school] there was no one. We were the first people at the camp. We found a place to sleep. After some time, we got appam and meat curry to eat. At night, nobody could sleep….” 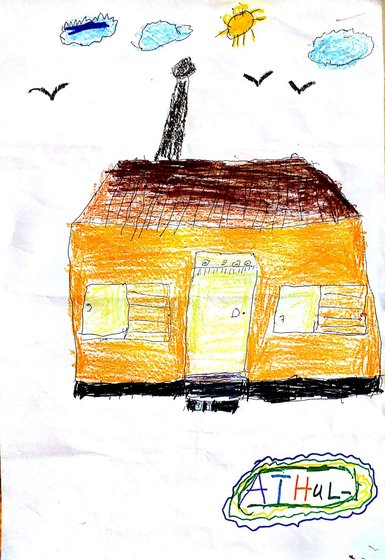 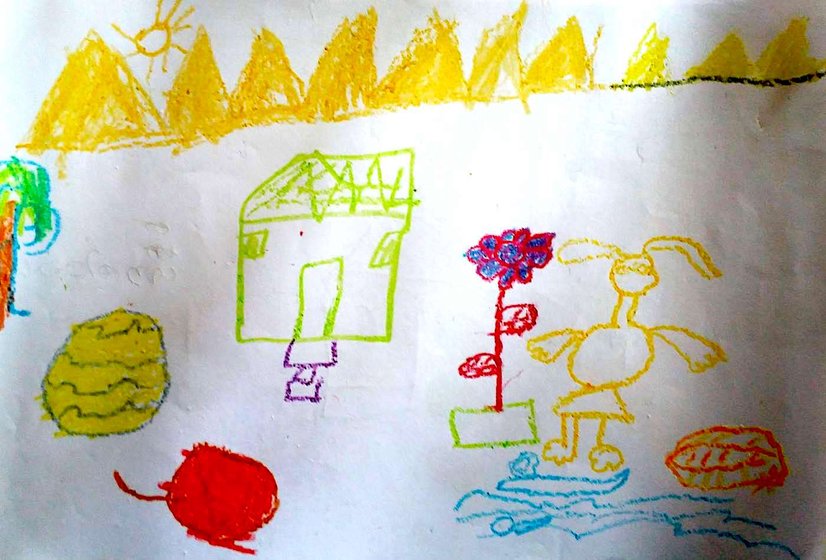 “It has been more than a month since our house was flooded [in July]. We were put up at a nearby house. On the 17th of this month [August], water flooded that house as well. With great difficulty we managed that night. The next morning, the water level rose and we watched. All of us began to cry in fear. Then the police uncles arrived in a big vehicle to rescue us. We were dropped at a place called Kalarcode. We were shocked and wondered where to go. Appi (Aunty) said that we should be sent to her house in Kayamkulam. So we took a large vehicle and went there. And the kind women who were managing the camp sent us to this school. From then to the present, we have not faced any difficulty.”

On August 29, 2018, the school in Mahadevikad re-opened, classes were held. Some of the children and the families who took shelter there have returned to their villages, others have moved to another relief camp.