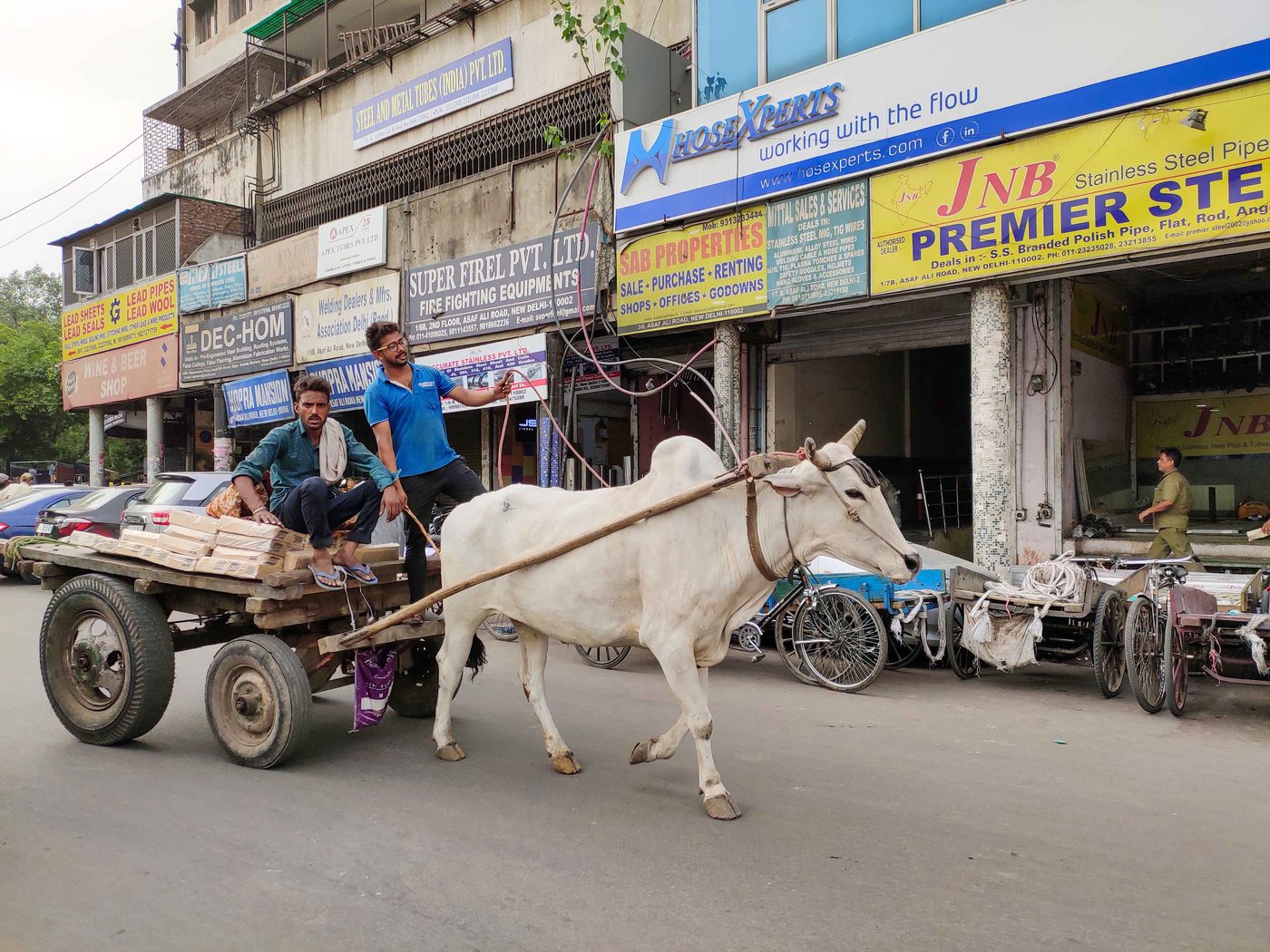 The men who go carting in the capital city

In north-central Delhi's cargo hubs, some of the bailgadi owners who have for long ferried goods for transporters are seeking better wages elsewhere, while others say it's their tradition and only work option

It’s past noon when Vikash Yadav and Laxman Singh arrive at Kamla Market, riding on their bullock carts. Almost every day, at that bustling transport hub close to New Delhi railway station, they deliver various goods, usually ferried from Pratap Nagar in north-central Delhi, not far from the Sabzi Mandi railway station.

In both areas, around six kilometres apart, transporters who bring cargo on trains and trucks hire the bailgadis for ferrying the goods across shorter distances – items such as cycle parts from Ludhiana, shoes from Agra, wheat from Punjab and Madhya Pradesh, motor parts from south India.

Loading and unloading is included in the service provided by the bullock cart drivers. "A tempo charges Rs. 1,000 for each trip. A bullock cart is cheaper, or else no one would ask for it. We make two trips daily and earn around Rs. 800-900 a day,” says 23-year-old Vikash.

The transporters also hire the bailgadis to distribute consignments from their godowns to shops in nearby markets. And many shopkeepers engage the bailgadis to send their merchandise to other parts of the city.

Though Delhi Traffic Police rules restrict the movement of bullock carts only to some areas and within regulated hours, Laxman, 27, says there are no other stringent rules. “We don't have to ask for permits and we don't pay any challan [ticketed fine] t o the traffic police. That's why we use it.” 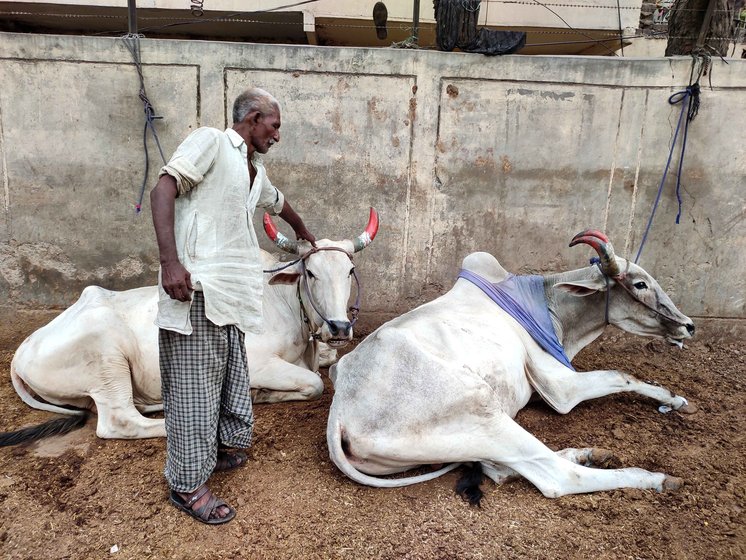 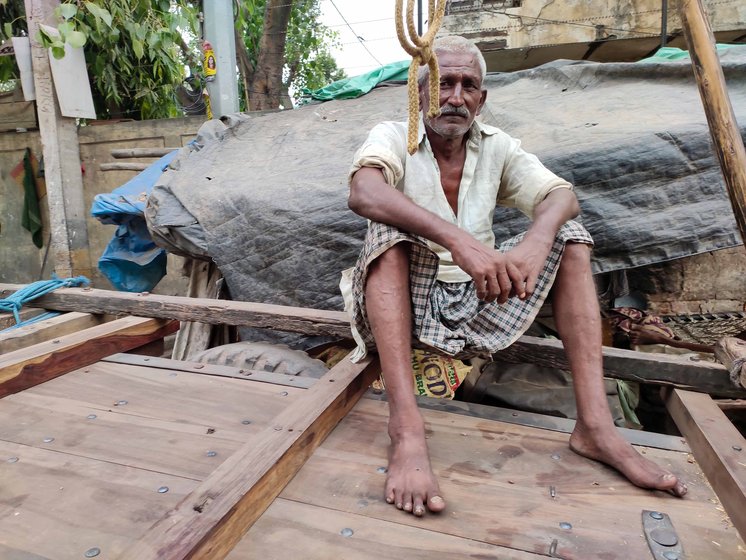 Bholu Singh lives in Delhi's Motia Khan area, and owns three carts, there oxen and a calf. Now 64, he started plying a cart when he was 12

Around four kilometres from Kamla Market, in densely-packed Motia Khan, the bullocks owned by Vikash and Laxman ( who are featured in the cover image on top ), as well as others, stand along the narrow streets. Many cart owners live in this locality in the Pahar Ganj area of Central Delhi. Carts that are not plying across the city are parked along the pavements – their drivers lounging, chatting, or feeding their bovines.

Among them is Bholu Singh, who started handling a bullock cart in Motia Khan when he was 12. "I never went to school. Before riding by myself I used to tag along with my father on his cart. One day he asked me to carry some goods to Sadar Bazar [in Pahar Ganj] and I never stopped after that," he says. He now owns three carts, three oxen and a calf.

Bholu, now 64, was born in Motia Khan, and recalls that his grandparents came to Delhi from a village in Rajasthan’s Chittaurgarh when his father was  around 12 years old. Bholu’s grandfather sold some property, bought a cart and arrived in Delhi on the same cart to earn a living in the city.

Like Vikash and Laxman, Bholu too makes two trips every day with his cart, mostly in and around Central Delhi, covering 7 to 10 kilometres each way. Depending on the traffic, it takes him 45 to 60 minutes for a one-way journey, and he too earns Rs. 800-900 a day. In winters, he tried to pack in one more trip because the animals get less tired in the cold. This fetches him another Rs. 300-600. “But I am not able to save a single paisa ,” he says. “Half goes into taking care of the oxen and the remaining is used for our daily needs." 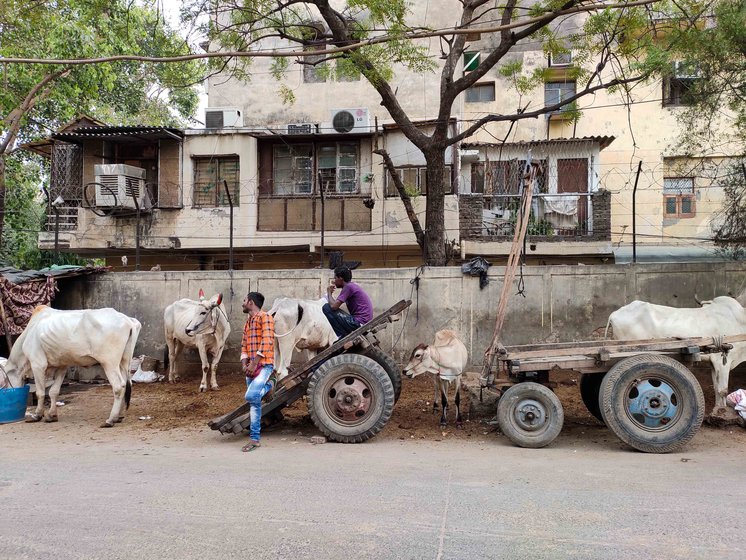 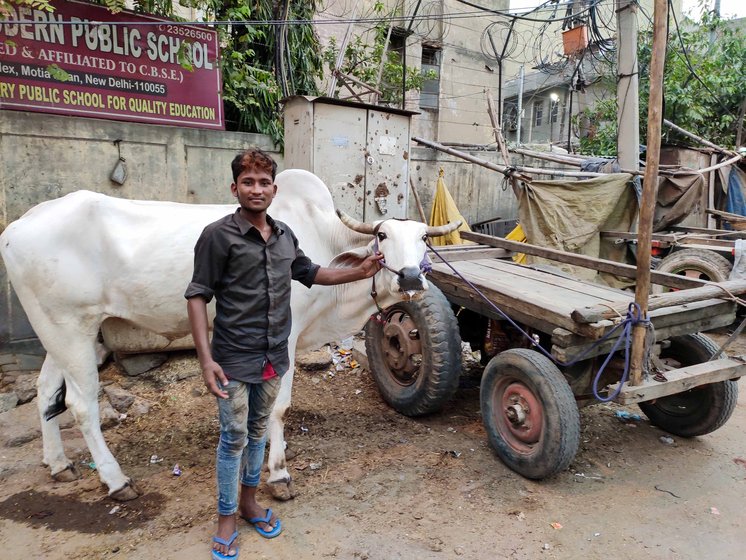 The densely-packed Motia Khan locality is home to many bullock carts owners, who park their animals and carts on the streets (left); among them is 18-year-old Kallu Kumar (right), who says, 'I had to follow in my father’s footsteps and ride the cart'

Bholu owns a house in Motia Khan, built from his savings some 30 years ago, but lives on a pavement in a one-room shack made of tin and tarpaulin, to be closer to his oxen. His wife Kamla Bai, 60, stays there too, to look after the animals. Their three sons, all in their 30s, gave up riding the carts after getting married, to try to earn more money. They now work for daily wages at construction sites, at recycling factories in Pahar Ganj and Shahdara, or as goods loaders. They live together with their families in the house built by Bholu.

Other young men in Motia Khan continue in their father’s tracks. Kallu Kumar, 18, is a third-generation driver who started plying the cart after dropping out of school. “When I was studying, I used to go with my father for deliveries after school and take care of the oxen,” he says. Kallu left school when he was unable to pass the Class 10 exam. “I started riding my father’s cart because my family didn’t have money to send me to school. Now I earn 500-600 rupees on an average daily," he adds.

Kallu does not regret dropping out school. "I earn money and my family is happy with it. I had to follow in my father’s footsteps and ride the cart," he says. Kallu’s 22-year-old brother Suresh also rides a cart, and their 14-year-old younger brother Chandan, who studies in Class 8, joins them sometimes.

Not far from Kallu’s home, Vijay Kumar Singh, who owns two carts and two oxen, wants his children to have more options. Glancing at his 11-year-old son Rajesh, he says, "I am sending him to school and will give my all for his studies. My father didn't have many resources, but I will try for him by plying the cart." Rajesh and his eight-year-old brother Suresh study in a government school in Pahar Ganj. 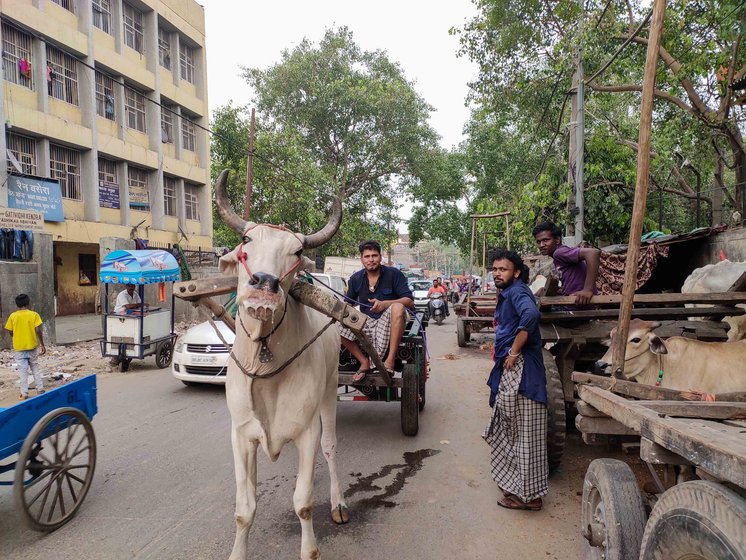 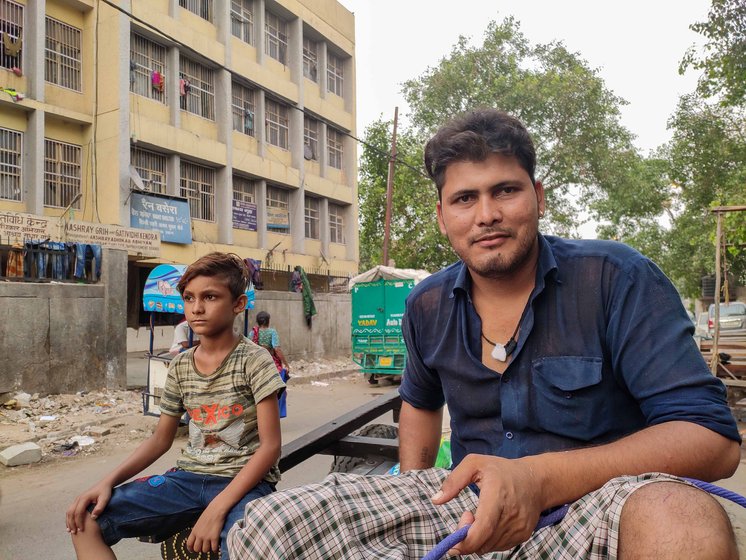 ' We know the price we pay for living with tradition. But we love our oxen. They are our family', says Vijay Kumar Singh, siting on the cart (left); he   never went to school, but wants his son Rajesh (right) to get a good education

Vijay, now 32, was barely 12 when he started riding a cart. "We live in the city but still earn through our traditional means. My uncle in Chittaurgarh had an ox for farming, but now even they use tractors,” he says, describing his maternal uncle’s farm in Daulatpura village of Begun tehsil . A more skilled occupation, he adds, might have brought his family more money: “We know the price we pay for living with tradition. But we love our oxen. They are our family."

Vijay and his wife Suman, 30, both look after their animals. The oxen are given a feed of chaff of wheat or rice, and straw of Bengal gram every morning, afternoon and evening. In summer, to help the animals cope with the high temperature and recover energy, jaggery, milk, butter and amla murabba (preserve) are added to the feed.

At times, say the bailgadi owners, gaushalas run by temple trusts or religious organisations help by supplying food or medicines for the animals. However, they offer shelter only to cows, so when an ox reaches the age of 17 or 18, many of the cart-owners leave them in the open in parts of Haryana and Uttar Pradesh, where butchers find them and take them away.

The bailgadi owners buy young oxen from the same states, as well as from Rajasthan, says Vikash. The price depends on the animal’s age, and ranges from Rs. 15,000 for a year-old calf to Rs. 40,000-45,000 for a seven-year-old, the most productive age for an ox, explains Bholu. They money comes either from savings or as loans from transporters, who charge an interest rate of 1.5 to 2.5 per cent a month. 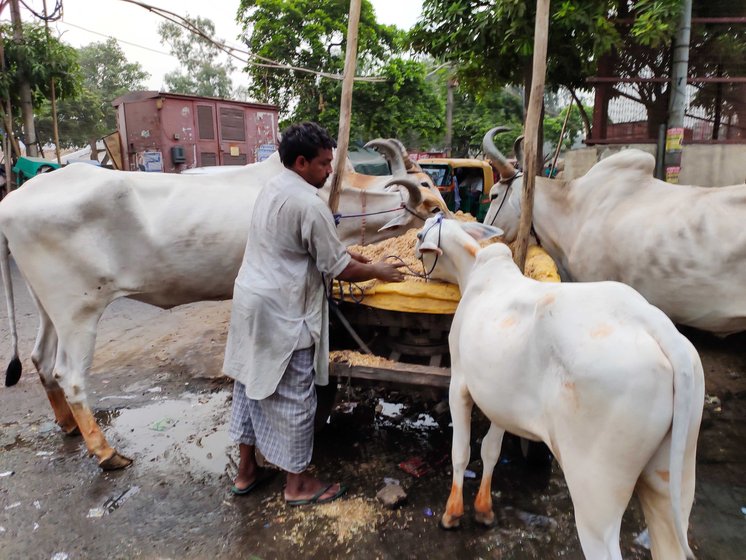 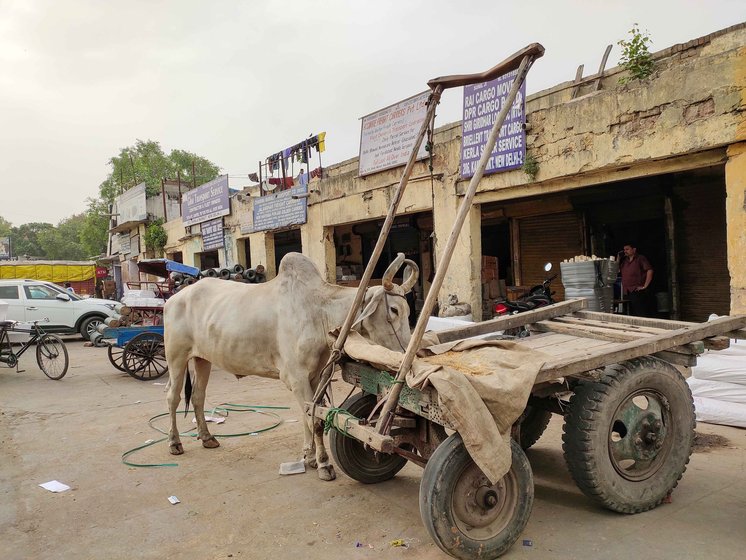 The oxen are given a feed of chaff of wheat or rice, and straw of Bengal gram every morning, afternoon and evening. In summer, to help the animals cope with the high temperature and recover energy, jaggery, milk, butter and amla murabba (preserve) are added to the feed

A new cart can cost Rs. 50,000 to Rs. 60,000. The cart owners commission ironsmiths in Pahar Ganj or Shahdara, who work with local carpenters to make the wagon from the wood of mango, neem or babul trees. A sheesham wood cart costs more. The bearings and axle are made of iron, which is cheaper, or of steel or aluminium. Sometimes, the carts are purchased in Haryana or Rajasthan, where they cost less.

Bholu and Vikash estimate that between 450 and 500 bullock carts ply in the capital – the Delhi Traffic Police though has no record of this because animal-drawn vehicles are not registered.

However, growing competition from motorised vehicles is slicing into the cat owners' earnings. "Earlier I used to carry goods till Fatehpur [in Uttar Pradesh, around 550 kilometres away]. But transporters now give these long-distance jobs to mini-trucks. Even for 4-5 kilometres, they load the goods on the Champion [a three-wheeled carrier]," says Bholu.

He recalls that in the 1990s, he earned just Rs. 70 a day, but didn’t have to go looking for work. He could roam the city’s streets on his cart without restriction. “I was happier then. I used to get work every day, but now I have to sit at home sometimes,” he says.

By then it is evening, and Vijay and Kallu tie their oxen and sit on a bailgadi to join Bholu and two other drivers. Bholu lights a beedi and says with a whiff of nostalgia, "I grew up seeing bullock carts around me. I want my grandchildren too to be able to see these carts at least." The others nod silently.

Sumit Kumar Jha is studying for a Master's degree in Communication at the University of Hyderabad. He is from Sitamarhi district in Bihar.

Vinutha Mallya is Editorial Chief at the People’s Archive of Rural India. She has been a journalist and editor for more than two decades, writing and editing news, features and books.