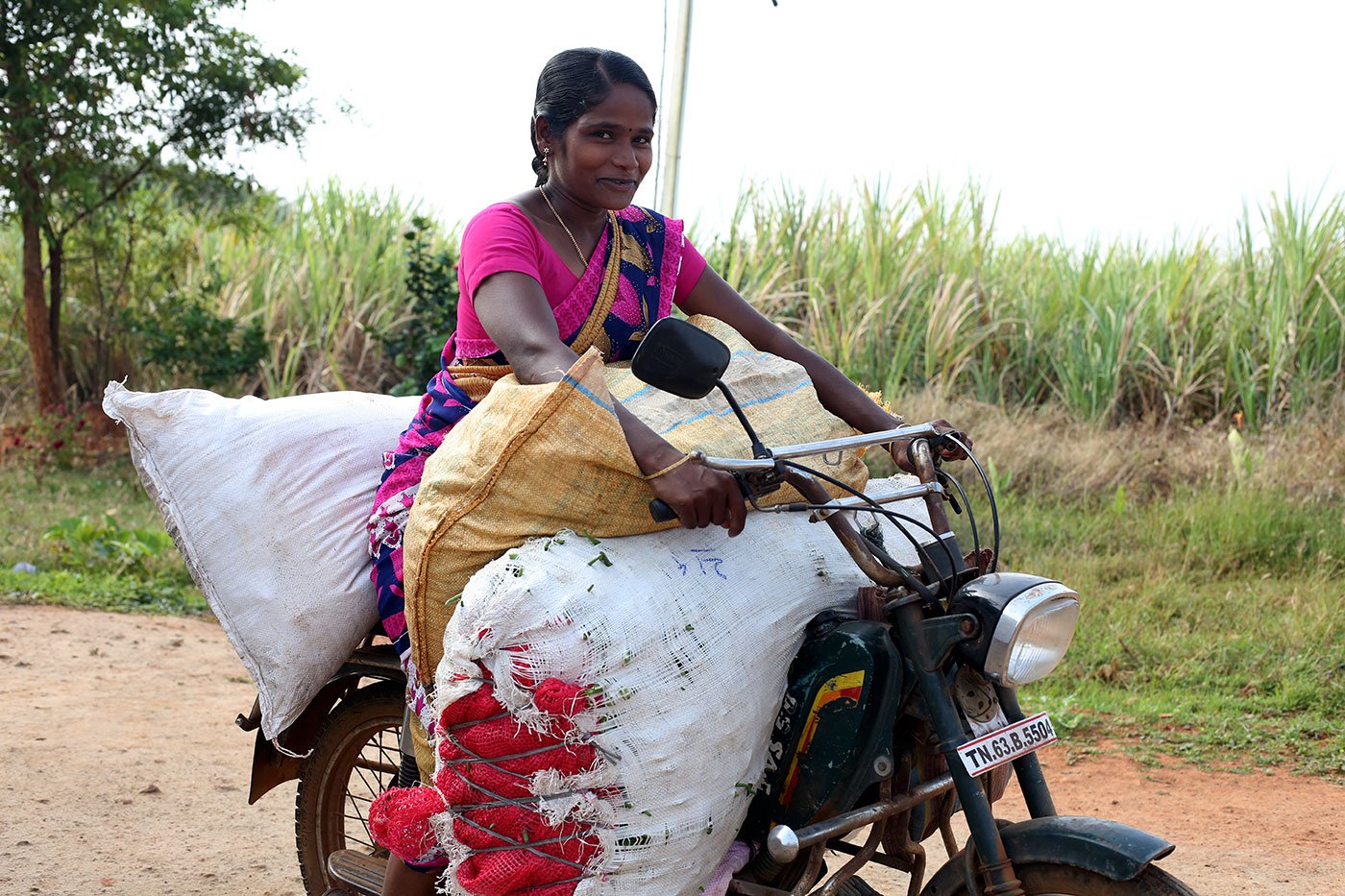 “Look out! There goes the miracle bike, driven by a sack of vegetables!” That’s a common shout from young men each time Chandra takes the produce from her farm in Melakadu village to the market in Sivagangai, 15 kilometres away, on her moped. “That’s because when I go around with sacks propped up before and behind me they cannot see the rider,” this tiny Tamil Nadu farmer explains.

Sitting on a jute cot in her verandah, right next to the moped, Chandra Subramanian really seems that small. She’s slightly built and looks about 18. Actually she’s 28, a mother of two, and an enterprising farmer who hates the pity older women show her for being a widow. “All of them – even my mother – worry and wonder what will happen to me. Yes, my husband died when I was 24, but I want to move on. I keep telling them not to depress me.”

Being around Chandra is anything but depressing. She laughs easily, especially at herself. Her humour softens the memories of an impoverished childhood. “My father woke us up one night. I was not even 10. He said the moon was full and white and we could harvest in its light. Thinking it was nearly morning, my brother, sister and I went with my parents. It took us four hours to scythe all the paddy. Then he told us we could catch a little sleep before school. It was 3 a.m. Can you believe it? He had dragged us out to the field at 11p.m!” 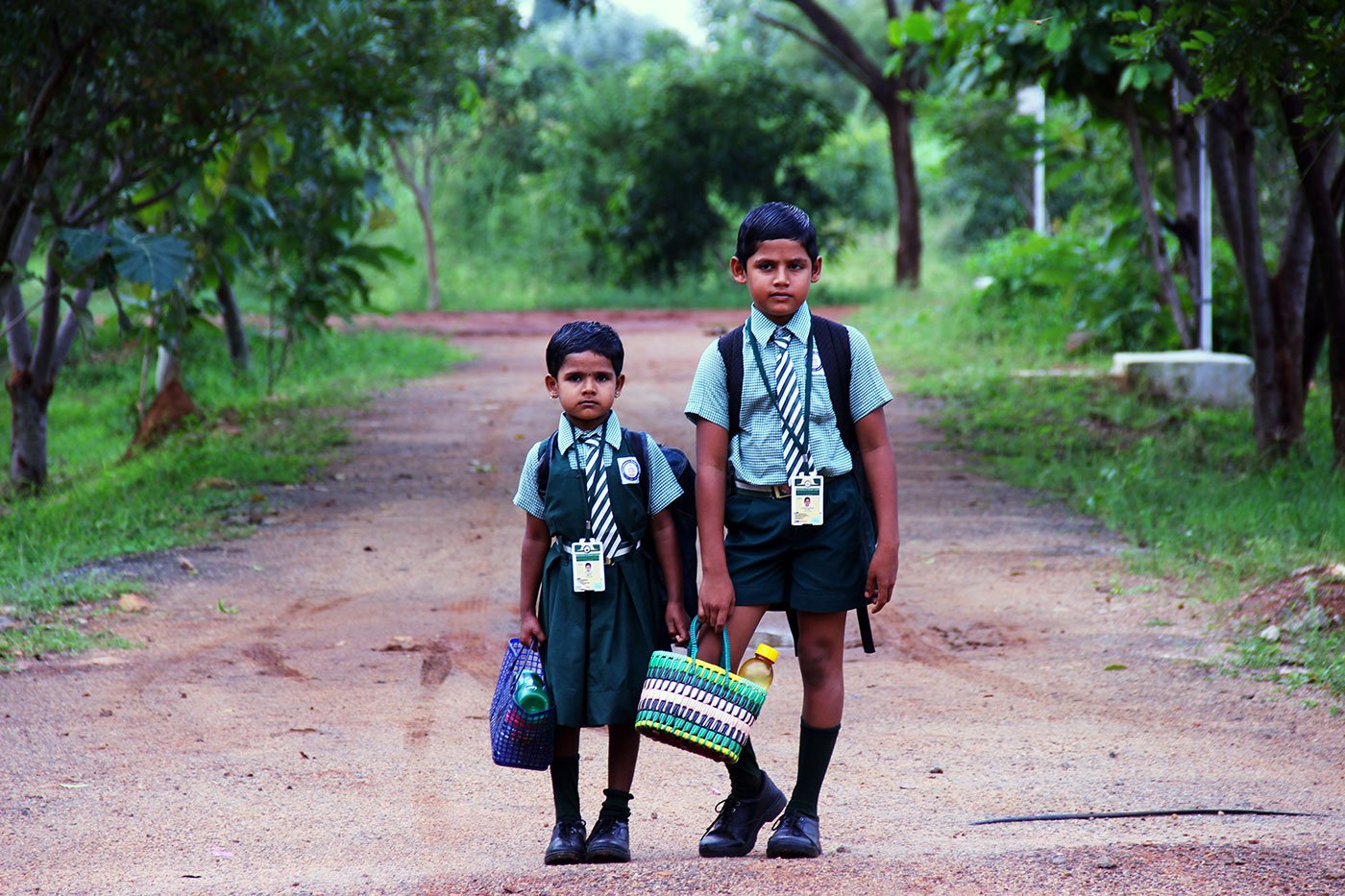 Dhanush Kumar and Iniya on their way to school

Chandra would never do that to her children. She is a single mother, fully committed to educating her son Dhanush Kumar, 8, and daughter Iniya, 5. They study in a private English medium school nearby. And it is for them that Chandra chose to become a farmer.

“I got married at 16 to my aunt’s son. My husband Subramanian and I lived in Tiruppur. He was a tailor in a hosiery company. I too worked there. Four years ago, my father died in a road accident. My husband was shattered. Forty days later, he hung himself. My father meant everything to him…”

Chandra’s new house (left) and the fields behind

Chandra came back to her village to live with her mother. She dithered about taking up tailoring again. Or studying. Both, she points out, would have been hard. A job meant long hours away from the kids. If she had opted for the degree route to a better life, she needed to first clear the 12th board exams. “Until I graduated, who would be around my children? My mother is very supportive, but still…”

Though she doesn’t call it that, Chandra sees farming as a flexi-hour job. She loves the convenience of working in her backyard – their fields are right behind her house – in a nightie. Her 55-year-old mother Chinnaponnu Arumugam divided the family’s 12 acres among her three children after her husband’s death. Now, mother and daughter raise vegetables, paddy, sugarcane and corn. Chinnaponnu also built a new house for Chandra last year. It is small but sturdy, and only lacks a toilet. “I’ll build one before Iniya is older,” Chandra promises.

For all such capital expenses – and the children’s school fees and uniforms – Chandra banks on her annual sugarcane crop. The quarterly income from paddy and the few hundreds she earns daily from the vegetables help her run the home. For this, she works nearly 16 hours every day. She’s up at 4 a.m. to do housework, cook and pack the kids’ lunch.

Then she goes to the fields to pluck brinjals, lady’s finger and gourds. Next, she gets Dhanush and Iniya ready and walks them to school. “They insist parents come formally dressed to drop kids. So I tie a saree on top of my nightie and go,” she giggles. Then she’s back toiling in the fields until lunch. “I rest maybe half an hour. But there is always work on the farm. Always.”

On market days, Chandra loads the vegetable sacks on her moped and goes to Sivagangai. “When I was younger I never went anywhere alone. I was terrified. Now, I go into town four times a day.”

Chandra goes to Sivagangai to buy seeds, fertiliser and pesticide. “Yesterday, Iniya demanded a new dress for a Christmas programme in school. And she wants it now!” she smiles indulgently. Her routine costs – including the daily labour for farm help, especially during paddy season – are met by the income from vegetables. “Some weeks, I earn 4,000 rupees. When prices fall, it’s not even half of that.” The small farmer spends hours at the market retailing her own produce. That gets her up to Rs. 20 more per kilo than wholesalers would pay. 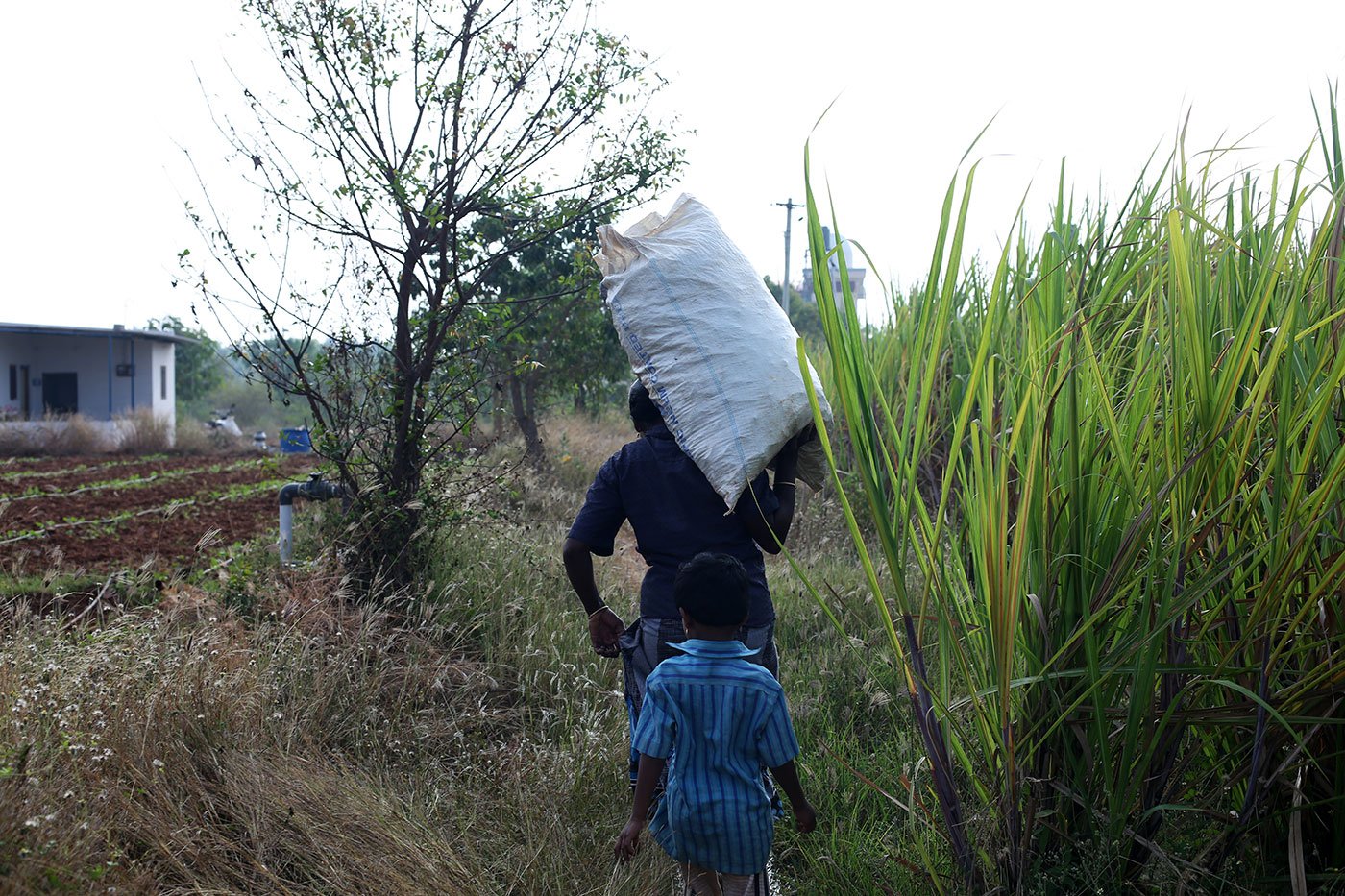 Iniya walks behind, as her mother carries home a sack of produce

She’s usually back early evening, by the time the kids return from school. And after playing awhile in the fields – while she works – the children go home with her. Dhanush and Iniya do their homework, watch a bit of television and play with their puppies and guinea pigs. “My mother thinks the guinea pigs are useless. She calls them rats, and scolds me for not raising goats,” Chandra grins, scooping up a fat one from the cage and petting it. “But last week, when I bought carrots for them in the market, someone asked me if they were for sale.” She thinks she might sell the furry rodents for a profit.

That surely would be very Chandra: making the best of a bad thing, at once witty and wise. While crossing a row of coconut trees, she tells me wistfully that she’s stopped climbing them. “How can I? I’m now the mum of an eight-year-old boy.” The next minute, she comments on migrants from other states, the floods in Chennai and how poorly farmers are regarded. “When I go to an office or a bank and introduce myself, they tell me to wait in a corner.” Where are the chairs, Chandra asks, for the people who grow your food?