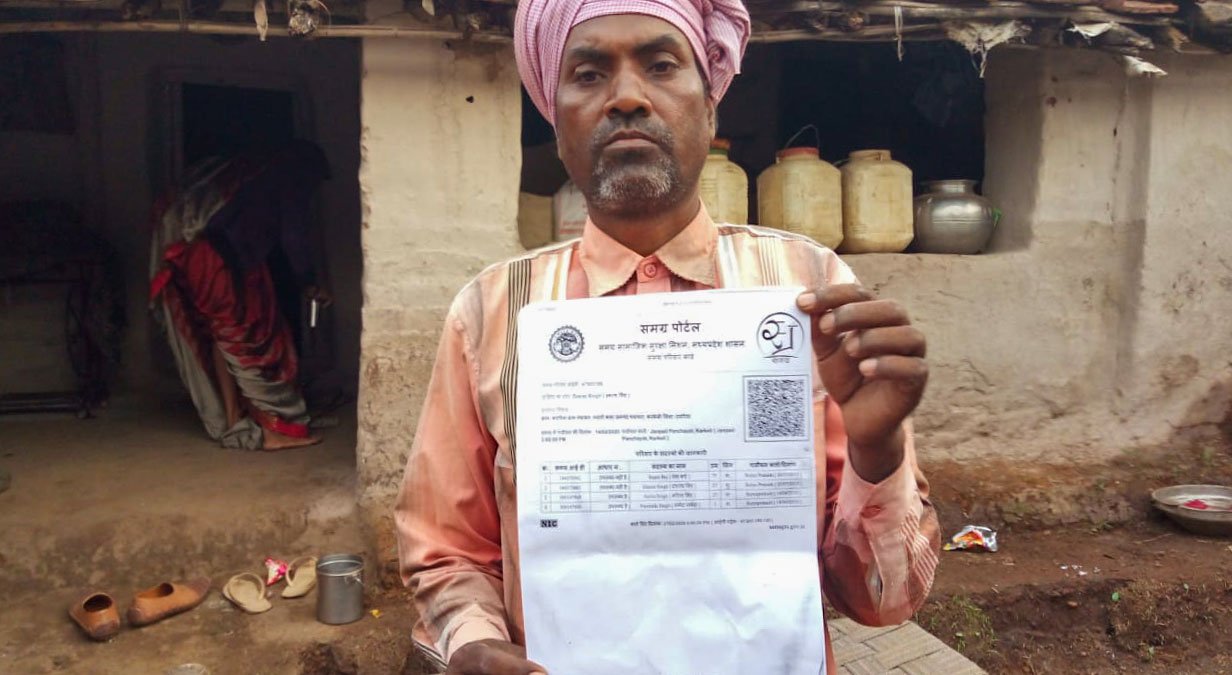 Running after ration cards in a maze in MP

Dashrath Singh, a farmer and labourer in Umaria district, has been unable to procure a ration card despite multiple attempts and expenses. His is one of MP’s many BPL families caught in a tangle of forms and offices

Dashrath Singh has been trying to get a ration card since the beginning of this year. But local officials in Umaria district keep telling him that his application is still pending.

Dashrath lives in Katariya, a village in Bandhogarh tehsil of Umaria district in Madhya Pradesh. Here, he works on his farmland and earns a daily wage of around Rs. 100 for a few days of work every month on nearby MGNREGA sites. He often depends on petty loans from a local private moneylenders – once during the lockdown, he borrowed Rs. 1,500.

Without a ration card – critical in ordinary times for poverty-line households, which would be even more useful during the lockdown – Dashrath’s family is forced to buy foodgrains from the market. “Farming helps us sustain ourselves to some extent,” says Dashrath’s wife, 25-year-old Sarita Singh. The family owns less than 2.5 acres, where they mainly cultivate kodo and kutki millets, along with wheat and maize.

Meanwhile, 40-year-old Dashrath continues to try his luck at procuring a ration card. “At the gram sabha on January 26 this year [in Katariya], I was told that there’s a form for the card that I have to fill,” he says.

The sarpanch said he should visit the Lok Sewa Kendra at Manpur town, around 70 kilometres from their village. A one-way trip there by bus costs Rs. 30. Dashrath went there twice, in February and March – a total of four bus journeys and tickets. Before the lockdown began on March 23 (in Madhya Pradesh), he also went to the tehsil- level office in Bandhogarh town, around 30 kilometres from his village. Here he was told to get a separate ID and so the form could not be processed.

For that separate ID, the officials at the Kendra in Manpur directed Dashrath to the block-level office in Karkeli, around 40 kilometres away. “They said that a separate ID card in my name is needed. My card was a joint one along with other family members, including my brothers. So I went to Karkeli and got a separate ID,” says Dashrath, who has studied till Class 10. 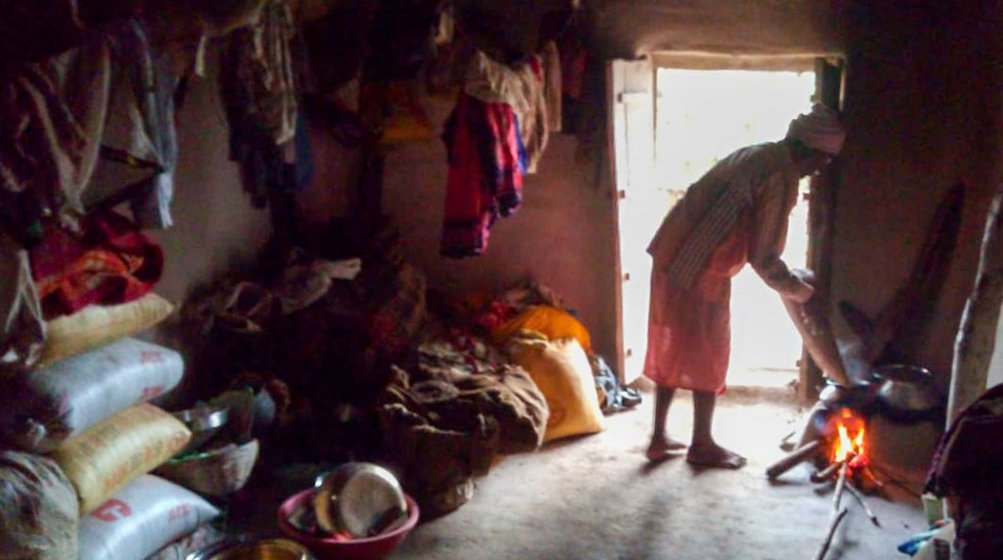 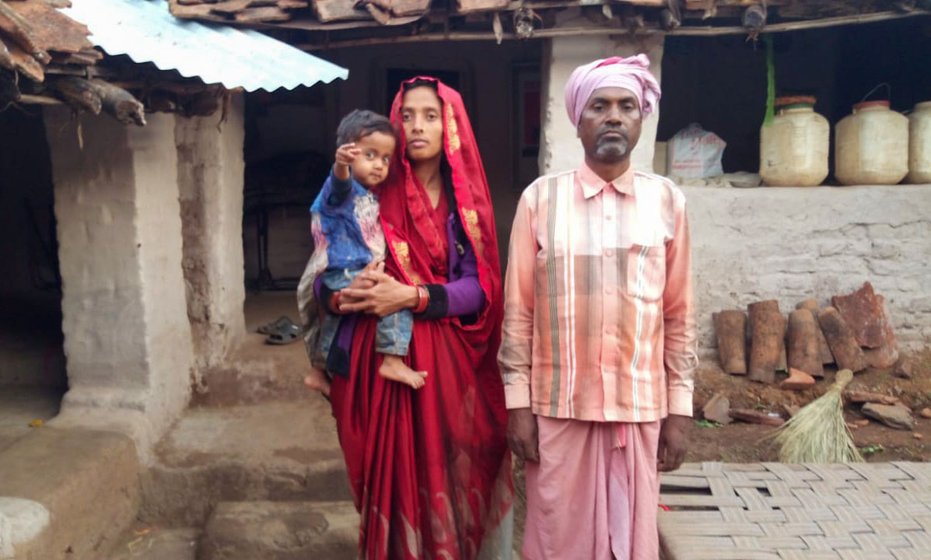 Dashrath Singh has been trying to get a family ration card since January, for himself, his wife Sarita and their daughter Narmada

The card he is referring to is popularly known as the Samagra ID (of the Samagra Samajik Suraksha Mission), Madhya Pradesh’s own version of a unique identification number. It was launched in 2012 with the intention of passing on food security entitlements, MGNREGA payments, scholarships, pensions and other benefits directly into the bank account of a family or an individual. A family is allotted an eight-digit Samagra ID, and an individual gets a nine-digit ID.

However, the multiple trips and Dashrath’s futile attempts to get a ration card were what the MP government’s Lok Sewa Guarantee Act was supposed to eliminate. The Act (also called the M.P. Public Services Guarantee Act) was passed in 2010 to streamline government services and reduce the role of agents in processing requests for Aadhaar cards, pensions, ration cards and other entitlements. It emphasised delivering services within a stipulated time limit , and included provisions for appeals before designated officials and through tech-based routes such as the MP e-district portal .

That turn to technology did not help Dashrath and others among Katariya village’s roughly 480 residents, who are still ploughing through a maze of forms and offices. “There is only one kirana store in our village, where the owner charges for the internet, and we don't rely much on that,” Dashrath says. “I prefer going to the office and submitting the form.” So for him and many others, it’s the district-level offices, or Lok Sewa Kendras, that remain the window for applications.

And for the Samagra ID, even though the MP government identified 22 socio-economic categories, including BPL families, landless labourers and families entitled to National Food Security Act provisions, the scheme has been impaired by corruption, alleges Sachin Jain, a Bhopal-based Right to Food activist and director of Vikas Samvad, an advocacy group.

'There is only one kirana store in our village, where the owner charges for the internet, and we don't rely much on that... I prefer going to the office and submitting the form'

Watch video: Through a maze in MP – Dashrath Singh’s long journey to get a ration card

Besides, Jain says, many who were not eligible also joined the queue to get the benefits. “‘One person can belong to two categories at the same time, such as a Scheduled Caste as well as a landless labourer. So the Samagra authority has been involved in re-duplication as part of an annual updating activity,” says Jain, where family units are advised to get separate IDs.

Since Dashrath’s extended family had a collective Samagra ID allotted in 2012, he was told at the block-level office in Karkeli to first get a separate unique identification number from the Lok Sewa Kendra for his own family. In February 2020, a week after this was done, at the district-level Lok Sewa Kendra in Umaria, Dashrath was allegedly asked to pay that bribe of Rs. 1500 in order to get his ration card.  (This reporter could not verify these allegations. There was no response on the landline of the Lok Sewa Kendra in Umaria district. And there has been no response so far to an email sent to the office.)

“I couldn’t pay the money or submit the amount later,” Dashrath had told this reporter in May, worried about how he will manage the next few months with no MGNREGA work available during the lockdown.

Dashrath and Sarita have a two-year-old daughter Narmada, and Dashrath’s 60-year-old mother, Rambai, lives with them too. ‘I do stitching work, which brings in Rs. 1,000 a month, but that also depends on season – when weddings are drawing near in the village,” says Sarita. She too works at MGNREGA sites when work is available, a few days in a month, for a daily wage of Rs. 100. ‘Whatever we grow on our field is just enough for us to eat. So we usually don’t sell the produce in market,” she says. 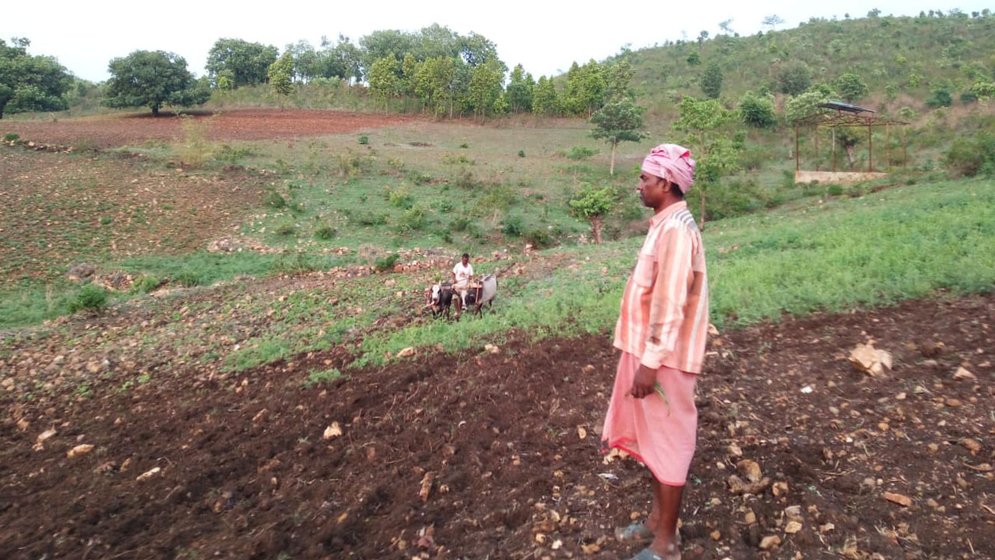 Agricultural yield in Umaria is not high. According to a 2013 Central Ground Water Board report , Umaria district is “covered by various rock types viz Basaltic, Sedimentary and Granitic terrains.” It is among 24 districts in the state counted as eligible for the Backward Regions Grant Fund. Low farm yields, poor infrastructure, a high SC-ST population and a high BPL population have placed Umaria among more than 250 districts in India that receives extra funds from the Centre for various development programmes since 2007.

However, in the villages of Umaria, not much seems to have changed.

For Dhyan Singh, another resident of Katariya village, a clerical error in the food coupon has ensured he gets less rations. A year after the launch of the Samagra ID, the MP government came up with yet another system, that of ID-linked food coupons in 2013, to plug leakages in the distribution of rations. “I never had a ration card because I didn’t know about it at all,” says Dhyan Singh. He recalls that in 2011 he got his name registered under the ‘Karmakaj’ scheme (as it referred to locally). On May 10, 2012, Dhyan Singh, who belongs to the Gond tribe of Madhya Pradesh, received a card under the state-led Sannirman Karmakar Mandal Scheme .

Three members of Dhyan Singh’s family were listed on the Karmakar card – his wife, Panchi Bai, 35, and two daughters, Kusum, 13, and Rajkumari, 3. The family owns five acres of land, and Dhyan Singh also labours in others’ fields, which fetches him Rs. 100 to Rs. 200 per day. Construction work under MGNREGA is available only for 10-12 days a month for the family.

Like Dashrath, for Dhyan Singh too, the annual yield of kodu and kutki millet is just enough to feed the family. ‘We have been trying for so long, yet haven’t been able to get a ration card’, says Panchi Bai, farer and homemaker. Though both the kids get mid-day meals at school it’s not enough, she adds. 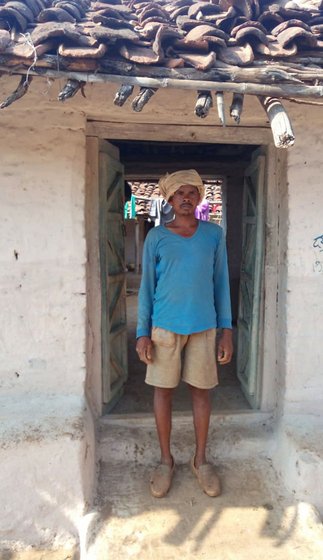 The Karmakar Scheme, launched in 2003 , was supposed to cover all informal labourers with a single card for the disbursement of various benefits such as old age pension, family pension and student scholarship. “Get the Karmakar card made, then you will get the coupon,” says Dhyan Singh, recalling his conversation with the sarpanch . He got the card, but didn’t receive rations for five years after 2011 because the food coupon was not issued in his name – he finally got the coupon in 2016.

When that coupon was issued on June 22, 2016, it left out Panchi Bai’s name, and listed only Dhyan Singh and their two daughters. He has tried to get the mistake rectified, but his wife’s name is still missing. The food coupon brings the family 5 kilos of rations per month per person – rice, wheat and salt. “It’s not enough, we eat proper meals only one time a day, that’s how we sustain ourselves,” says Dhyan Singh.

According to Samagra data compiled by the MP government, as of July 16, 2020, of a total of 3,564 applications received for ration cards in Umaria district, only 69 applications have been approved by the District Supply Officer and Junior Supply Officer at the state’s Food & Civil Supplies Department. Close to 3,495 applications in Umaria were yet to be processed. (This reporter has sent a mail to the office of the director of the Samagra’s Mission, but not received a response so far.)

On March 26, 2020, the MP chief minister announced that during the Covid-19 lockdown, all BPL families will get free rations for a month. Local activists, however point out the need for long-term measures instead of temporary fixes.

Meanwhile, Dashrath Singh is busy working on his field. "I don’t have time to follow-up with local babus now,” he says. It’s the sowing season and he’s hoping to for a decent yield so that his family can manage in the absence of a ration card.

With inputs from Sampat Namdev, social activist in Katariya village, associated with the NGO Vikas Samvad, which focuses on malnutrition in rural Madhya Pradesh.

Akanksha Kumar is a freelance journalist based in Delhi. She is a former full-time digital and TV journalist, and focuses on rural affairs, environment and government schemes.

Other stories by Akanksha Kumar