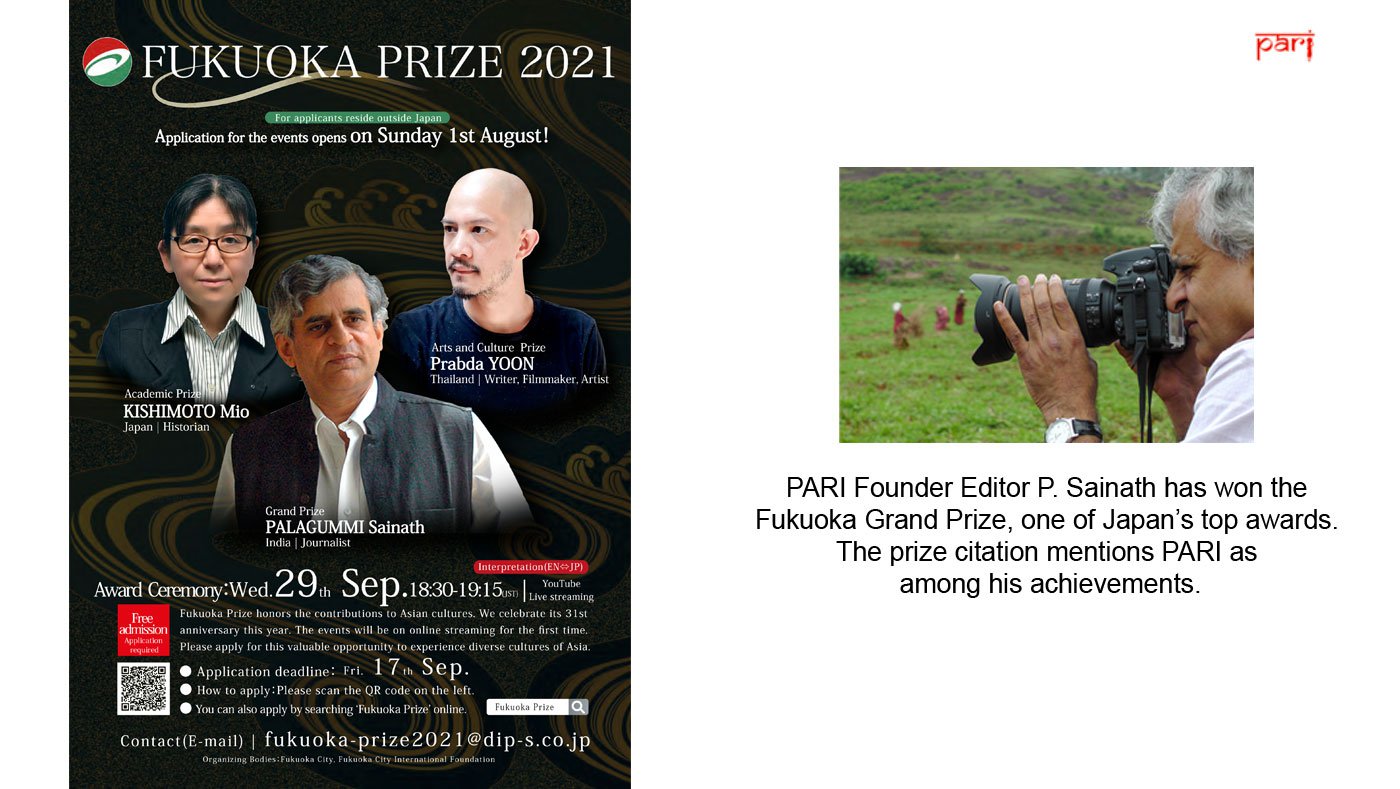 P. Sainath is the first ever winner in the journalism category, and the citation mentions PARI

PARI Founder Editor P. Sainath has won the Fukuoka Grand Prize – among Japan's very top international awards (open to people from all Asian countries). It was announced this year on June 28. At the awards ceremony – scheduled for end-September – the crown prince of Japan is usually present. Sainath is the first ever winner in the journalism category.

There are three prizes: Academic Prize, Culture Prize and the Grand Prize – the  biggest of the lot. Previous Indian winners of the Academic Prize include Prof. Romila Thapar. Previous Indian winners of the Culture Prize include sarod maestro Ustad Amjad Ali Khan. The last Grand Prize winner from India was composer-musician A. R. Rahman (2016). This award carries a cash prize of 5 million yen (roughly Rs. 33.5 lakh).

To Sainath, it has been given also taking PARI into account. The full citation on the Fukuoka Grand Prize website mentions PARI in the very first paragraph. It says that Sainath is:

"A passionately committed journalist who has continued to investigate impoverished farming villages in India, listen to voices from the rural population, capture the reality of the people’s lifestyle, and report 'rural stories'. As Asia goes through turbulent changes, Mr. Sainath has been seeking new 'knowledge' and promoting civil cooperation. For this reason, he is a very deserving recipient of the Grand Prize of Fukuoka Prize."

Sainath has announced that the cash prize (about Rs. 33.5 lakhs) will be used this way:

2) The remaining amount of a little over Rs. 20 lakhs will go towards setting up 10 new PARI fellowships for rural journalists working in Indian languages, and from Dalit and Adivasi communities.

These are the  details and Sainath’s acceptance speech . The website of the prize has photographs of Sainath in the field and at one of his many talks with a houseful audience. There is even a photo of the entire PARI team .

During his 40 years in journalism , Sainath has won over 50 national and international awards, and journalism fellowships. But he has also declined a few, like the Padma Bhushan, which is given by the government of India.

He has taught thousands of journalism students and continues to teach over a hundred of them each year. He also mentors scores of reporters, and inspires several photographers, filmmakers, editors, writers and readers.

This is PARI’s 30th prize in six and a half years of our existence.

On June 3, 2021, the PARI series on Women’s Reproductive Health Rights won a Special Mention in the Asian College of Journalism Awards, 2020 in the Investigate Journalism category. The reporting in the ongoing series, in collaboration with the Population Foundation of India, is the work of an all-women team of reporters. Those whose reports figured in the series winning a special mention include:

On April 5, 2021, the Spoorthidhama Foundation in Karnataka – an organisation dedicated to the values and ideals of Dr. B. R. Ambedkar – announced a lifetime achievement award for PARI founder editor P. Sainath for his “exceptional contribution and commitment to journalism,” his “exemplary service through PARI,” and his “concerns towards socio, economic and political inequalities.” The award, carrying a cash prize of Rs. 1 lakh, was conferred online on April 14, Ambedkar Jayanti.

This is the 30th award won by PARI since we launched in December 2014. The full list so far follows.

30. Fukuoka City Foundation and Citizens of the City, 2021
P. Sainath wins the Fukuoka Grand Prize for his outstanding journalism and as the founder of PARI. The award is conferred every year to honour individuals who have made contributions to the fields of Asian studies, Asian art and Asian culture.

28. Spoortidhamma Foundation
P. Sainath wins the Bodhivruksha Award for his journalism work and as the founder of PARI. The award is conferred every year on people who have dedicated their lives to enable and empower the socially excluded communities through their meaningful interventions.

27. WAN-IFRA ‘s South Asian Digital Media Awards, 2020
The PARI Team won the silver prize of WAN-IFRA ‘s South Asian Digital Media Awards , 2020. PARI bagged the Silver in the category 'Best Special Project for Covid-19'. Beginning from the last week of March, PARI has published nearly 150 landmark stories and stories and documents related to impact of the lockdown on the livelihoods and daily lives of the most marginalised segments of India.

24. Prem Bhatia Memorial Trust, New Delhi, 2020
The PARI Team won the Prem Bhatia Award for journalism on Environment and Development issues “for its extensive field reports, including climate change effects and the impact of the pandemic on rural India.”

15. The Statesman, Kolkata, 2018
PARI Author Puja Awasthi won the Statesman Prize for Rural Reporting for two stories published on PARI on July 5 and August 3, 2017: Beaten but unbowed – Sunanda Sahoo's silent struggle and Drums and dreams beyond pickle and papad .

12. South Asian Short Film Festival, Kolkata, 2018
15 of PARI’s video films were selected for SASFF-2018: 13 films in the Competition Documentary category and 2 in the Official Panorama category (the films are listed below).

3. National Film Awards, Government of India, New Delhi, 2016
PARI Fellows Nidhi Kamath and Keya Vaswani received the Silver Lotus (Rajat Kamal) for the Best Promotional Film at the 63rd National Film Awards 2016 for their film Weaves of Maheshwar , published on PARI on May 2, 2016.