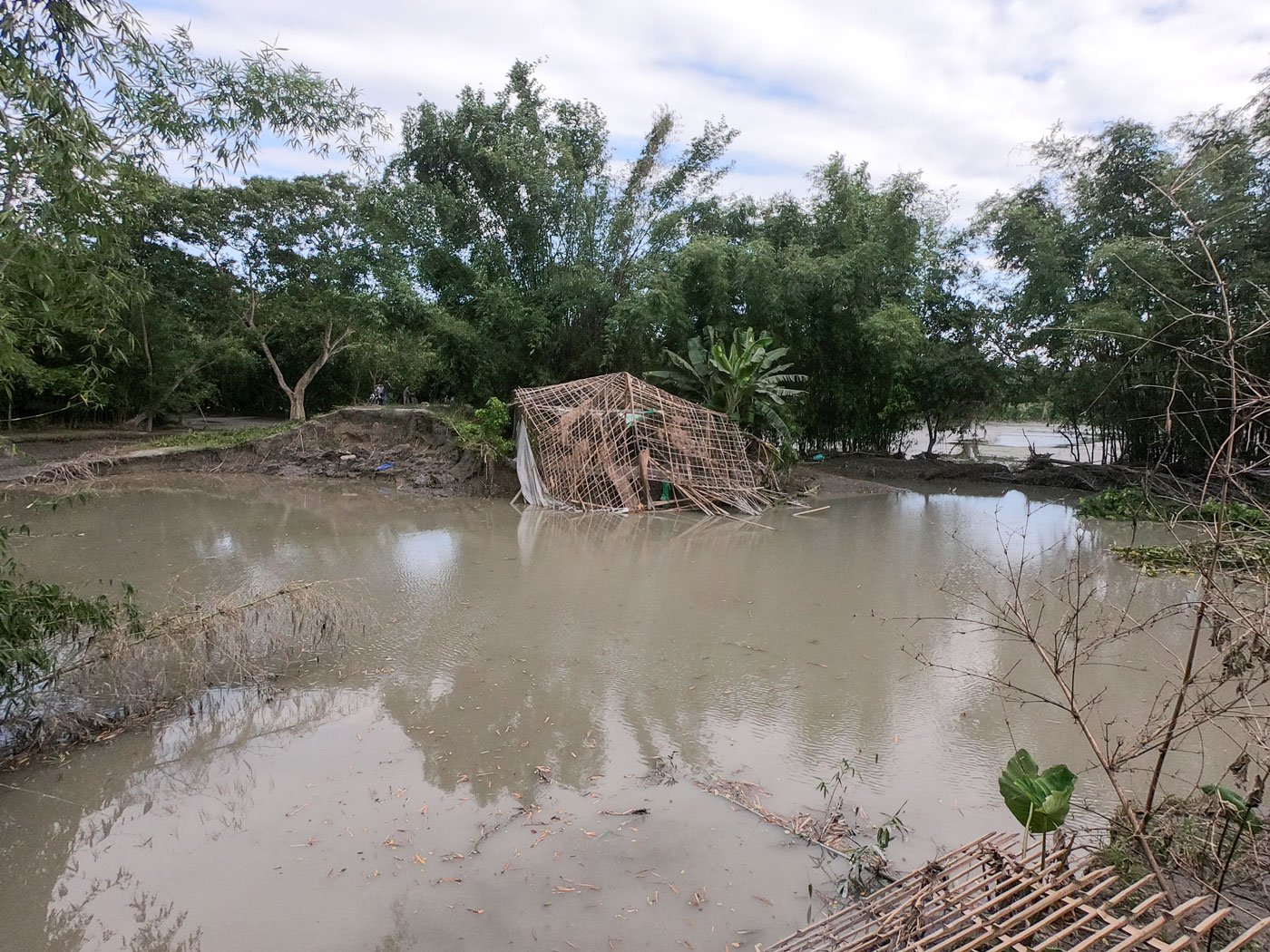 Nanoi floods: the night of June 16

In Assam’s Darrang district, the Nanoi, a tributary of the Brahmaputra, burst its banks due to excessive rainfall. The river water swept into homes, submerged freshly planted fields and emptied fish ponds

On the night of June 16, 2022, Laba Das, like others in Assam’s Nagaon village, was desperately piling sandbags on the banks of the Nanoi river. They had been told 48 hours before, that the river, a tributary of the Brahmaputra, was going to breach its banks. The sandbags had been provided by the district administration to these villages of Darrang district that lie along its banks.

“The embankment broke around 1 a.m. [June 17],” says Laba, a resident of Nagaon’s Hira Suburi hamlet, in Sipajhar block, speaking of the breach. “We were helpless as it was breaking at different points.” It had been raining incessantly for over five days by then, but the state was being pummelled by the southwest monsoon since the beginning of the month. The Indian Meteorological Department had issued a red alert, forecasting ‘extremely heavy rainfall’ (more than or equal to 244.5 mm in a day) over Assam and Meghalaya during June 16-18.

At around 10.30 p.m. on the night of June 16, the Nanoi also swept with tremendous force into Kalitapara hamlet of Khasdipila village, a kilometre south of Nagaon. Jaymati Kalita and her family lost everything in the floods. “Not even a spoon was left,” she says, sitting outside a temporary tarpaulin shelter with a tin roof. “Our house, the granary and cowshed were washed away by the strong current,” she adds.

According to the Assam State Disaster Management Authority’s flood report, about 19 lakh people (1.9 million) in 28 districts of the state were impacted by the rain of June 16. Darrang, where close to 3 lakh people were affected, was among the three worst-hit districts of the state that night. When the Nanoi overflowed its banks, six other rivers in the state – Beki, Manas, Pagladiya, Puthimari, Jia-Bharali and Brahmaputra – were flowing above the danger mark. The rains continued to ravage the state for over a week after that. 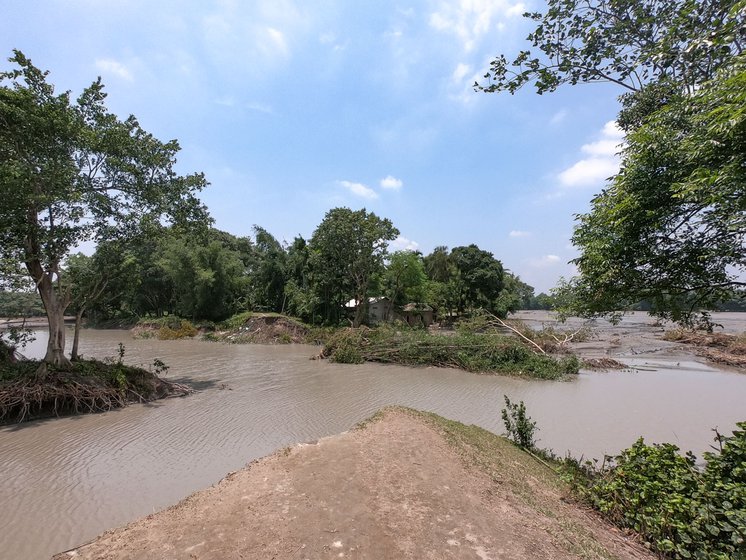 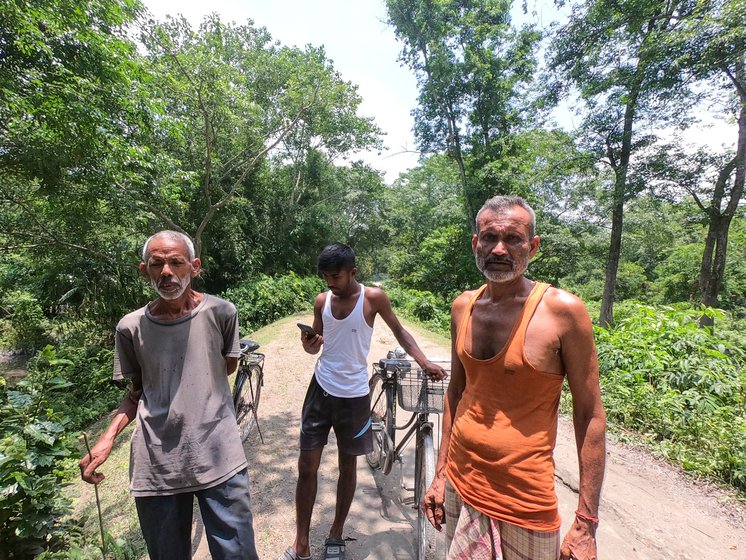 Left: A flooded area of Khasdipila village in Darrang district, after the Nanoi river burst its banks on the night of June 16. Right: Tankeswar Deka, Laba Das and Lalit Chandra Das (from left to right) in Nagaon village. The embankment there had been damaged by overgrown tree roots, white ants and rats, Tankeswar says 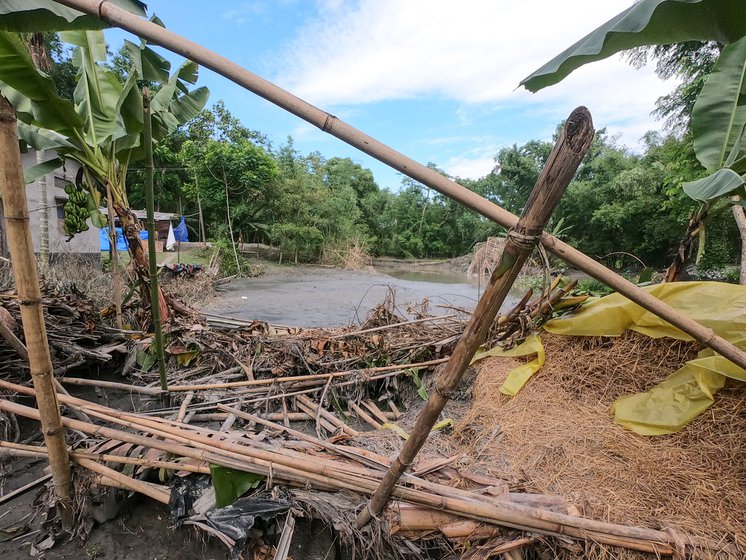 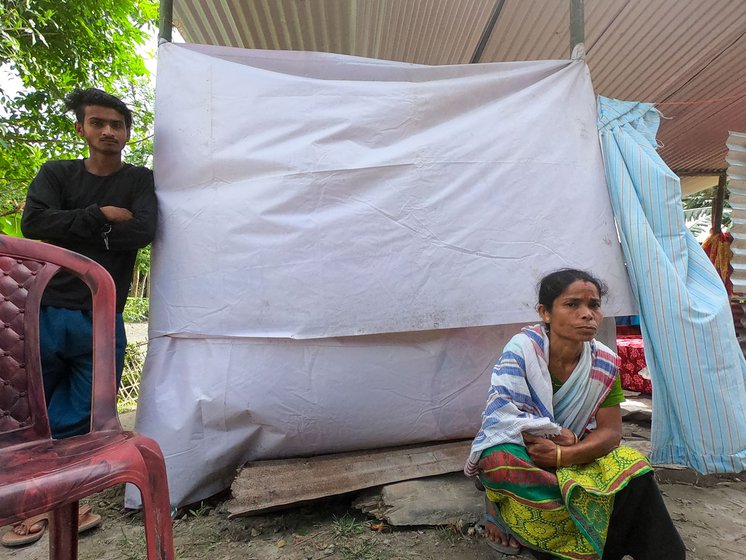 Left: In Khasdipila village, where the strong current washed away the house, granary and cowshed that belonged to Jaymati Kalita and her family. Right: Sitting at a temporary shelter nearby, Jaymati (at the right) says, ‘Not even a spoon was left’

“We witnessed floods in [the years] 2002, 2004 and 2014, but this time it was dreadful,” says Tankeswar Deka, who walked two kilometres in knee-deep water from Nagaon to reach the nearest public health centre at Hatimara, an area near Bheruadolgaon. He went there on June 18 to take rabies vaccine after a pet cat bit him.

“The cat was starving,” explains Tankeswar. “Maybe she was hungry or scared of the rain water. It had been two days since her owner had fed her. It wasn't possible [for the owner] as there was water all over. The kitchen, the house, the whole village was under water,” he says. Tankeswar had already had two of the five vaccine doses when we met him on June 23. And the flood waters have since receded towards the lower lying Mangaldoi area.

Overgrown tree roots, white ants and rats had all damaged the embankment, says Tankeswar. “It had not been repaired for a decade,” he points out. “Paddy fields are submerged in 2-3 feet of mud. People here depend mainly on farming and daily wage labour. How will they run their families?” he asks.

It’s a question that Lakshyapati Das is also struggling with. His three- bigha land (close to an acre) is covered in mud. “My paddy seedlings in two kathas [five kathas equal a bigha ] is all mud now,” he says worriedly. “I can't sow seedlings again.”

Lakshyapati’s daughter and son study in Sipajhar College, 15 kilometres from Nagoan. “They need 200 rupees every day to go to college. I don’t know how we are going to manage that money. The [flood] water is gone, but what if it comes again? We are frightened and distressed,” he says, even as he hopes that the embankment will be repaired soon. 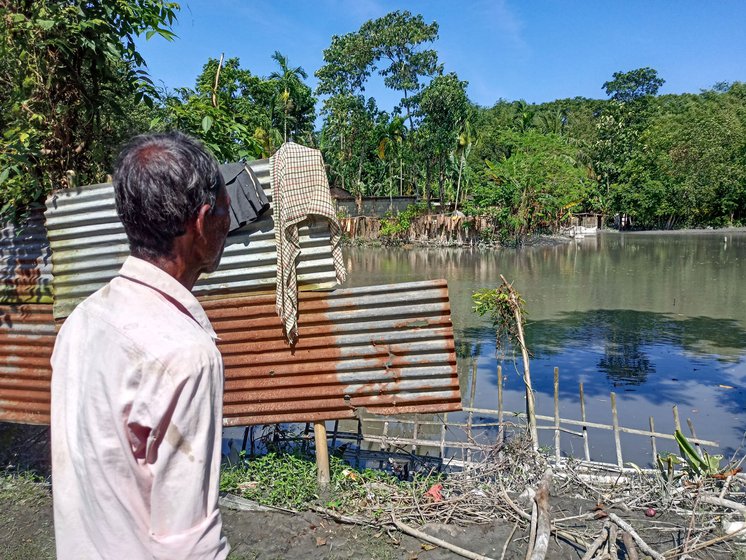 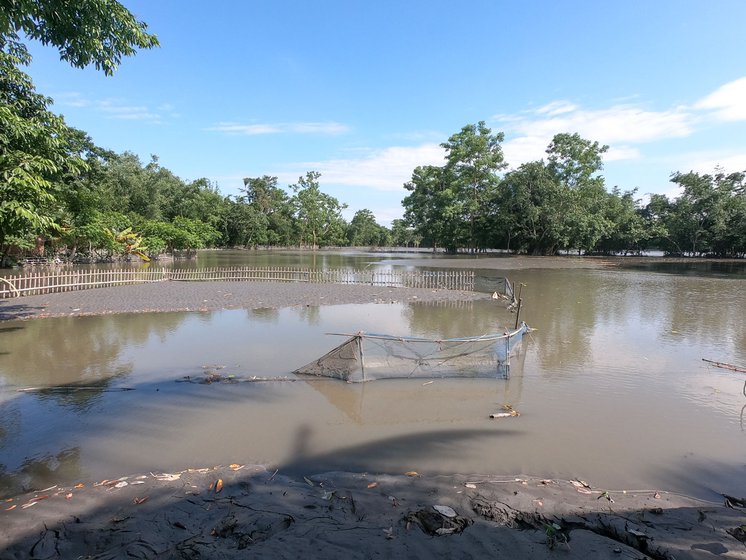 Left: Lakshyapati Das looking at his submerged land. Right: In Nagaon, many farmers’ fields are swamped 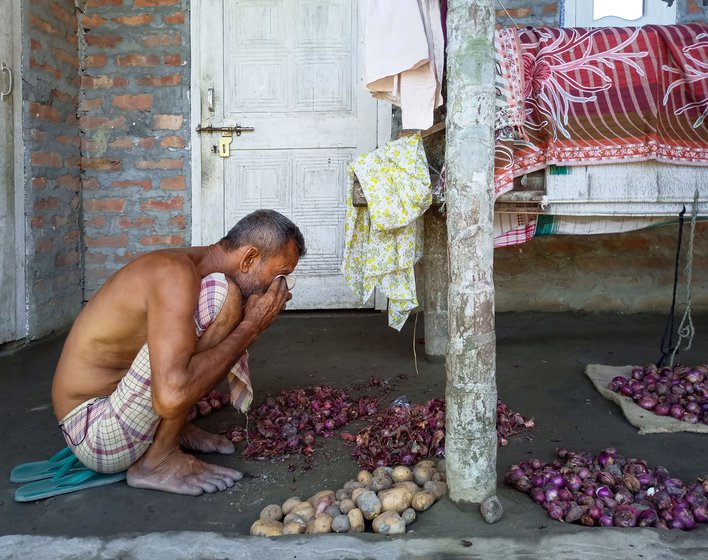 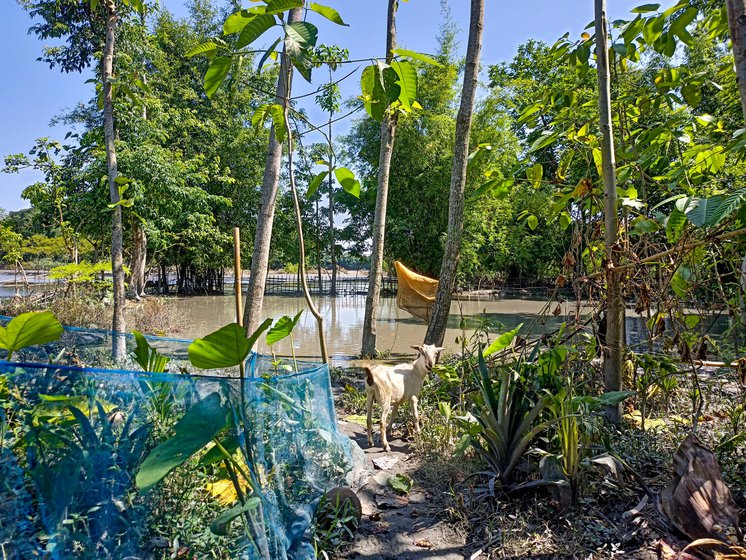 Left: Lalit Chandra Das segregating rotting potatoes and onions that were damaged in the floods; the onions are making his eyes water. Right: A goat from the family's herd of eight in front of the overflowing fish pond. ‘The big fish are all gone’

“The white gourd creeper has died and the papaya trees are uprooted. We distributed the gourds and papayas to others in the village,” says Sumitra Das in Hira Suburi. The family’s fish pond has also gone under. “I had spent 2,500 rupees on fish seeds to populate the pond. The pond is now on level with the land. The big fish are all gone,” adds Sumitra’s husband, Lalit Chandra, as he separates the onions that had rotted in the flood waters.

Sumitra and Lalit Chandra cultivate land under the ‘ bandhak’ system, where a quarter of the harvest is given to the land owner in lieu of rent. They grow crops for self-consumption and Lalit also does daily wage work in the nearby farms sometimes. “It will take a decade for the fields to be ready for cultivation again,” says Sumitra. Finding fodder for the family’s eight goats and 26 ducks after the floods has been a problem too, she adds.

The family must now rely only on their son Labakush Das’s income from selling essentials and vegetables like onions and potatoes at the markets in Namkhola and Lothapara, both 7-8 kilometres from Nagaon.

But amidst the losses and distress, on June 27, Sumitra and Lalit’s daughter Ankita received the happy news that she had scored a first class in the higher secondary (Class 12) examination. Though she is keen to study further, her mother is unsure given the family’s financial situation now.

Like Ankita, 18-year-old Jubli Deka wants to study further too. A student of NRDS Junior College in Dipila Chowk, about three kilometres from her home in Nagaon, she scored 75 per cent in the same exam. Looking at the destruction around, she is not sure of the future. 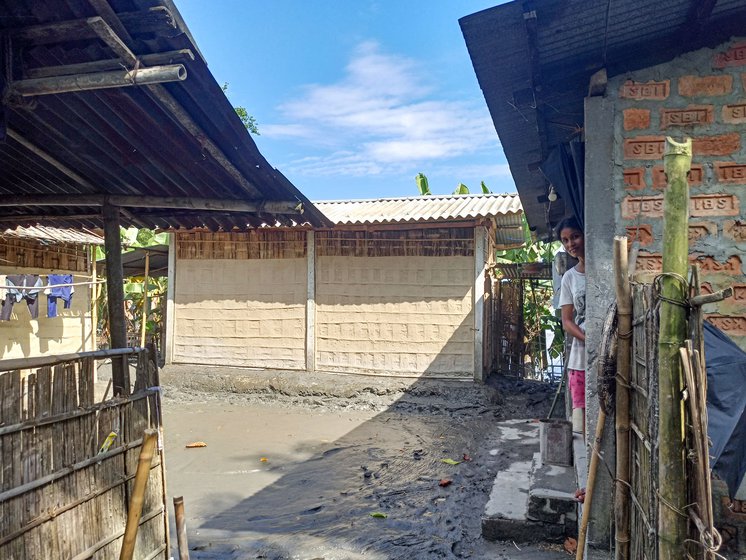 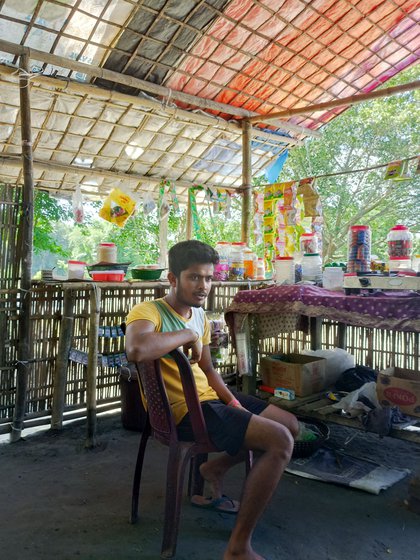 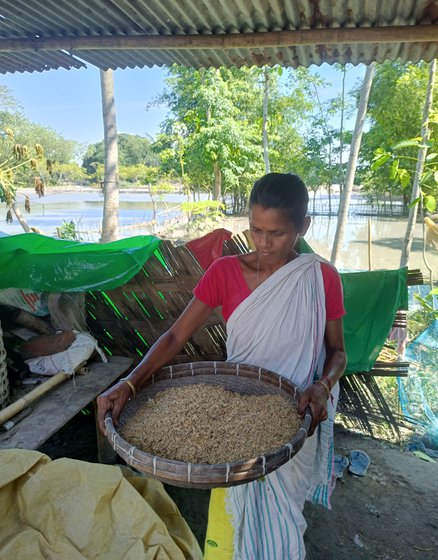 Left: Jubli Deka standing at the door of her home, the courtyard filled with mud brought by the flood waters. Centre: Dipankar Das in his shop, which was under water for 10 days. Right: Sumitra Das showing paddy that was damaged by the rain

“I don't like staying in the camp, so I’m back here today,” she says, speaking to us through the window of her flood-ravaged house in Nagaon. The others from her family of four are at a relief camp organised by the district administration. “That night, we couldn’t decide where to go, what to take,” says Jubli, who did manage to pack her college bag when their home was getting flooded.

For about 10 days during the rains, 23-year-old Dipankar Das couldn’t open his tea stall in Nagaon. He usually made Rs. 300 a day, but business is yet to pick up after the deluge. When we visit him on June 23, the lone customer is in his shop had come in for a cup of soaked moong dal and a cigarette.

Dipankar’s family does not own any land. They depend on his earnings from the stall and the occasional wage work done by his 49-year-old father, Satram Das. “Our home is still not liveable, it’s knee deep in mud,” says Dipankar. The semi-pucca structure needs major repairs, which will cost the family over Rs. 1 lakh, he says.

“It would have been possible to avert this disaster if the government had taken steps before the floods,” says Dipankar, who moved back to Nagaon during the Covid lockdown, from Guwahati, where he worked for a popular bakery chain. “Why did they [district administration] come when the embankment was about to break? They should have come in the dry season.

According to the Assam State Disaster Management Authority, about 19 lakh people in 28 districts were impacted by the rain of June 16

Watch video: Assam’s Darrang district: after the rain and floods

Meanwhile, Dilip Kumar Deka, a khalasi worker from the Public Health Engineering Department, shows us a list of where the department will now instal tube wells in the village. A flood-proofing measure, tube wells constructed on higher ground make drinking water accessible to people during floods.

When asked why the department had delayed the process to after the floods, he said simply, “We just follow orders from above.” Dilip’s house in Darrang district’s Byaspara village was also under water. By June 22, the district had had 79 per cent more rains than normal since the beginning of the month.

“Yesterday [June 22] the administration distributed water packets, but today we don’t have a drop of water [to drink],” says Jaymati, whose husband and elder son were away getting a rabies shot after they were both bitten by a dog.

When we were leaving from Nagaon, Lalit Chandra and Sumitra came out of their flood ravaged house to see us off. And Lalit Chandra said: “People come, give us relief packets and go. No one sits and talks to us.” 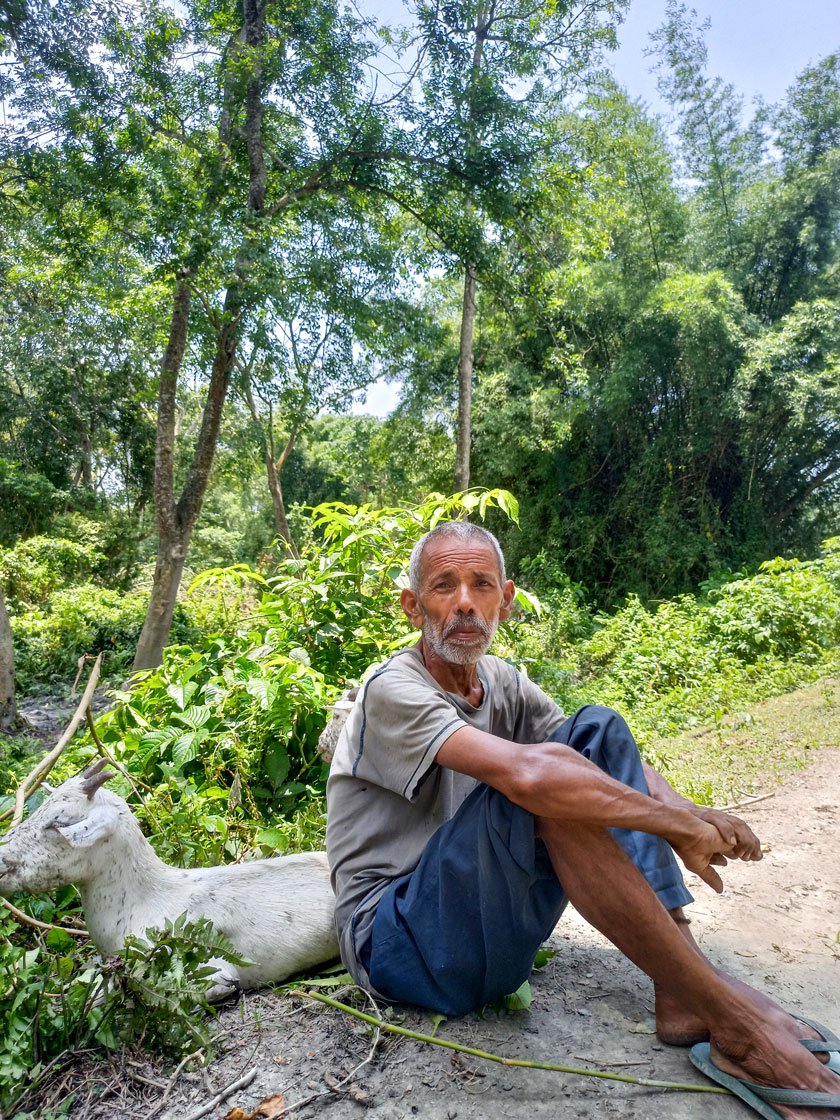 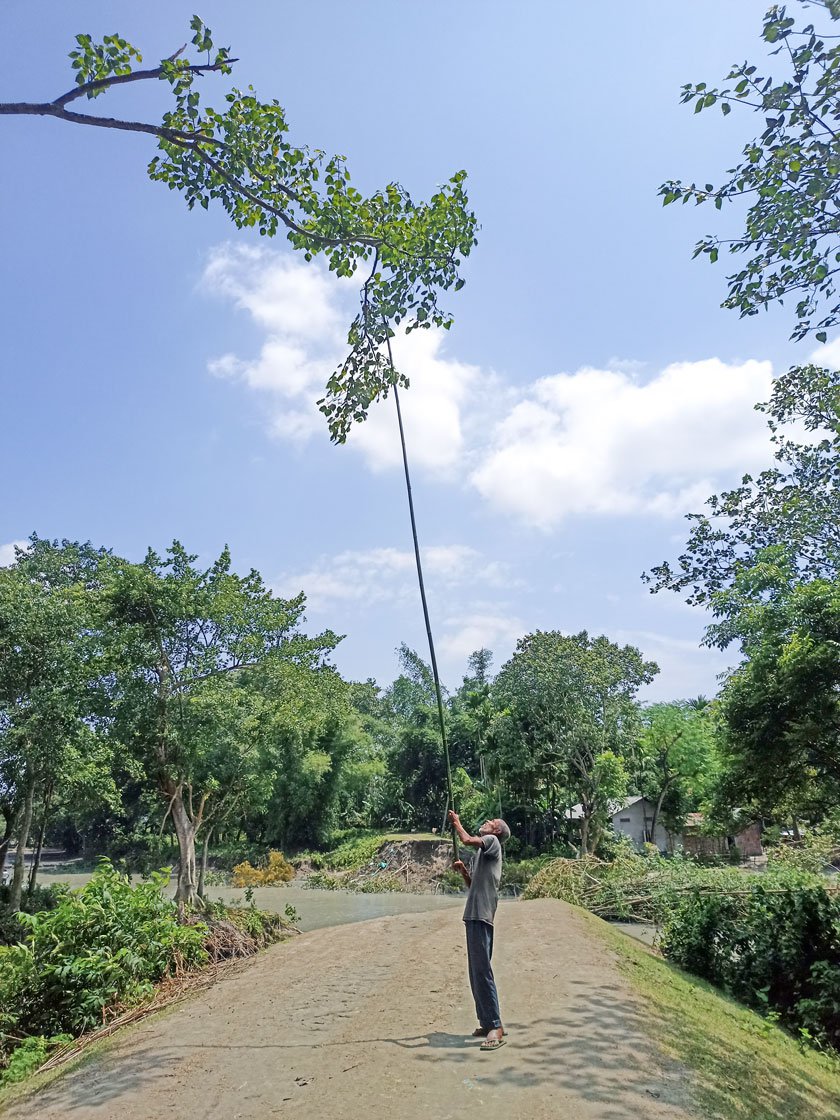 Left: Tankeswar Deka takes a dig at the lack of official response to the crumbling embankment. ‘This area is called Hatimara , the place where elephants died. If the embankment is not repaired, this will be Banemara , destroyed by the flood.’ Right: Reaching for the high branches of a tree to feed his goats 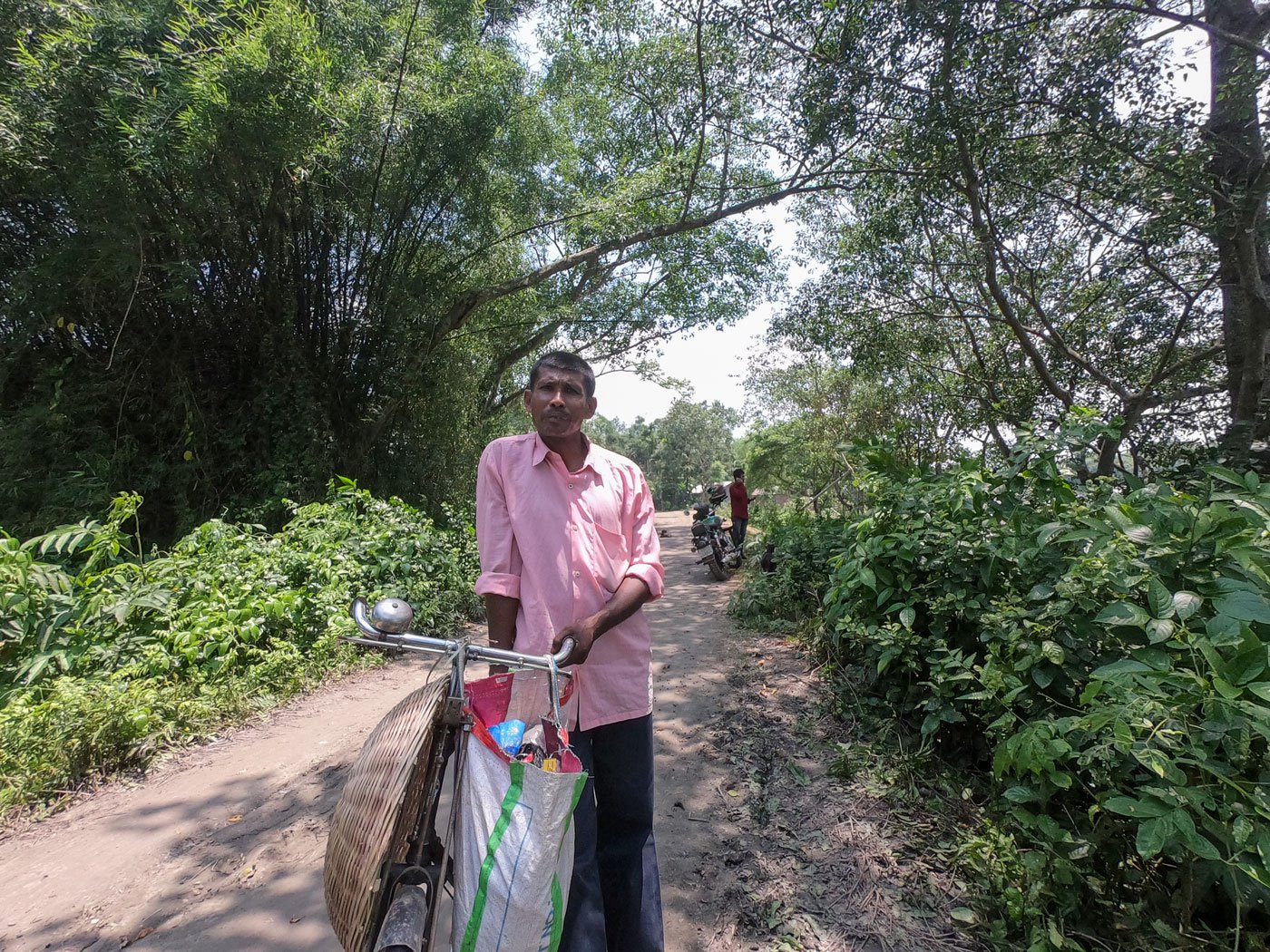 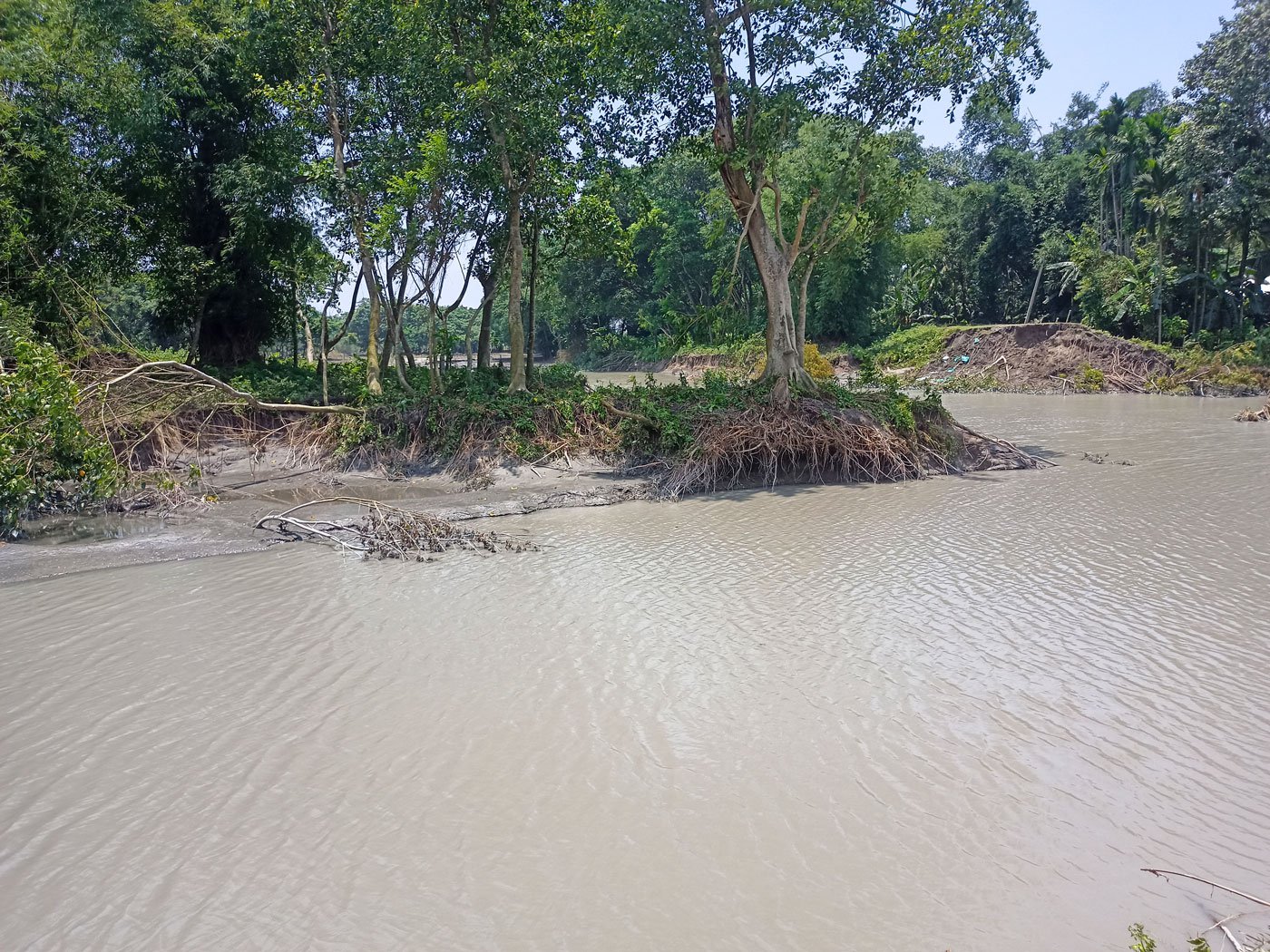 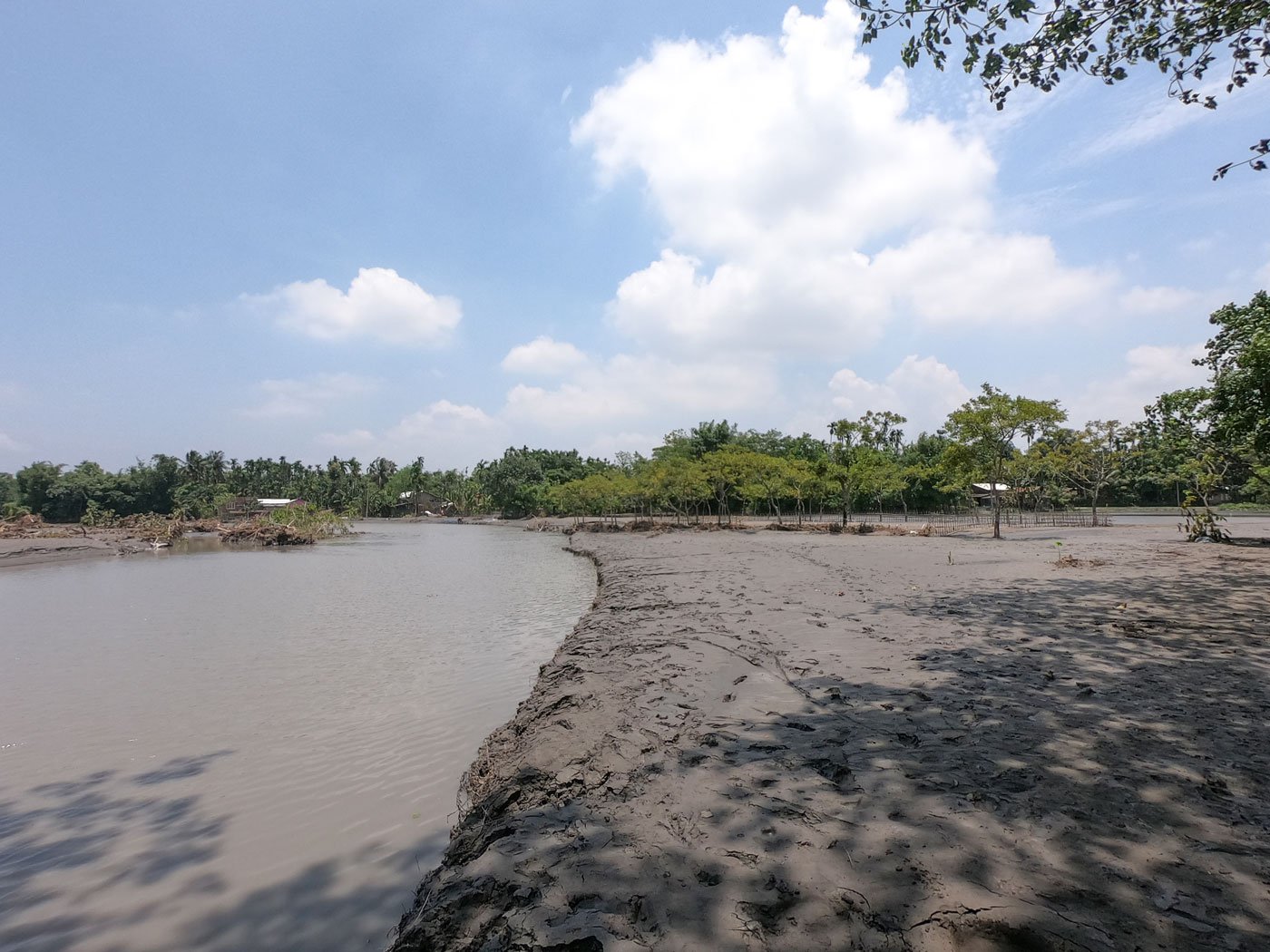 This paddy field was ready for seedlings before the floods, but it's filled with two feet of mud now 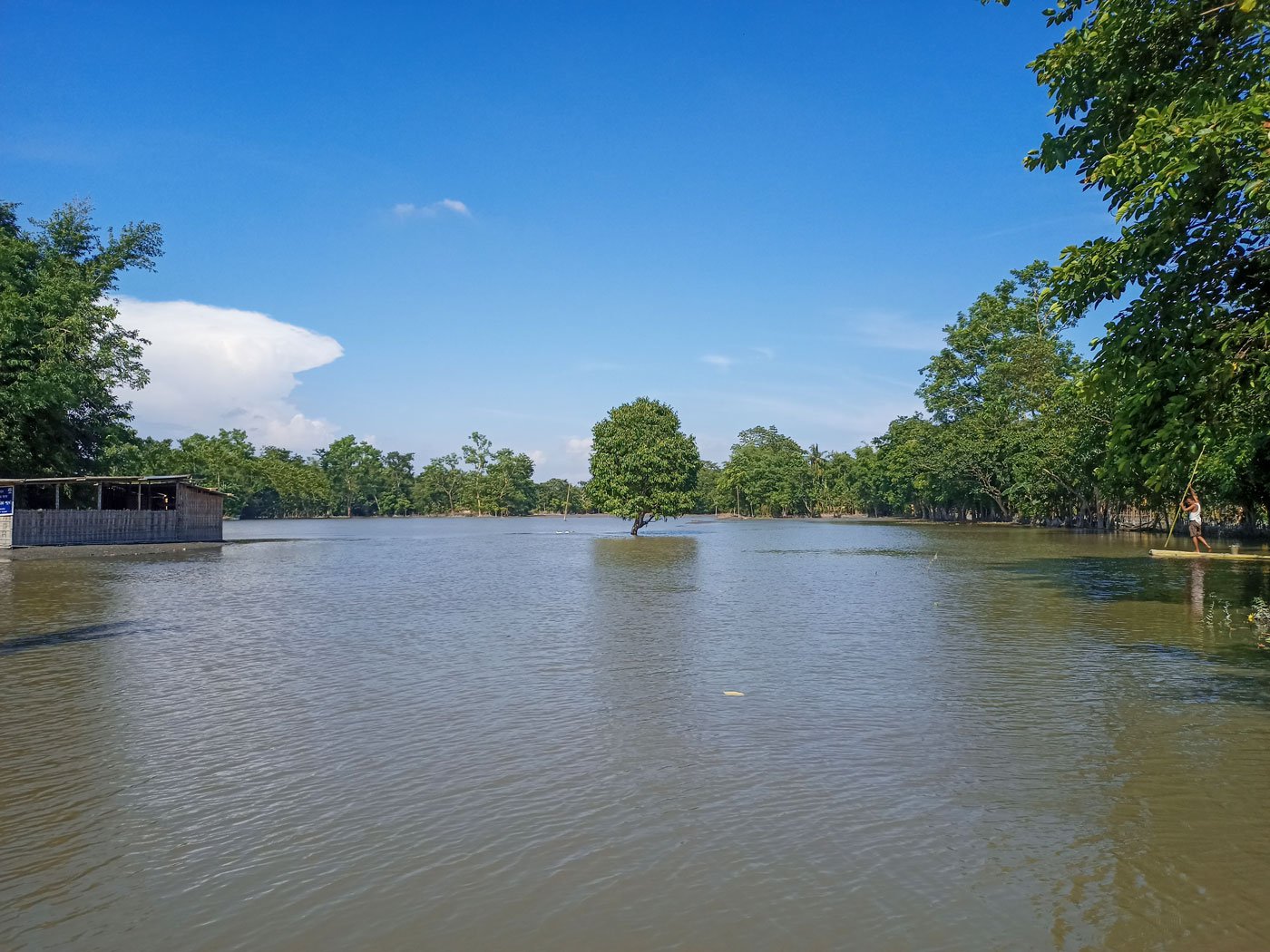 The submerged fields of Nagaon village 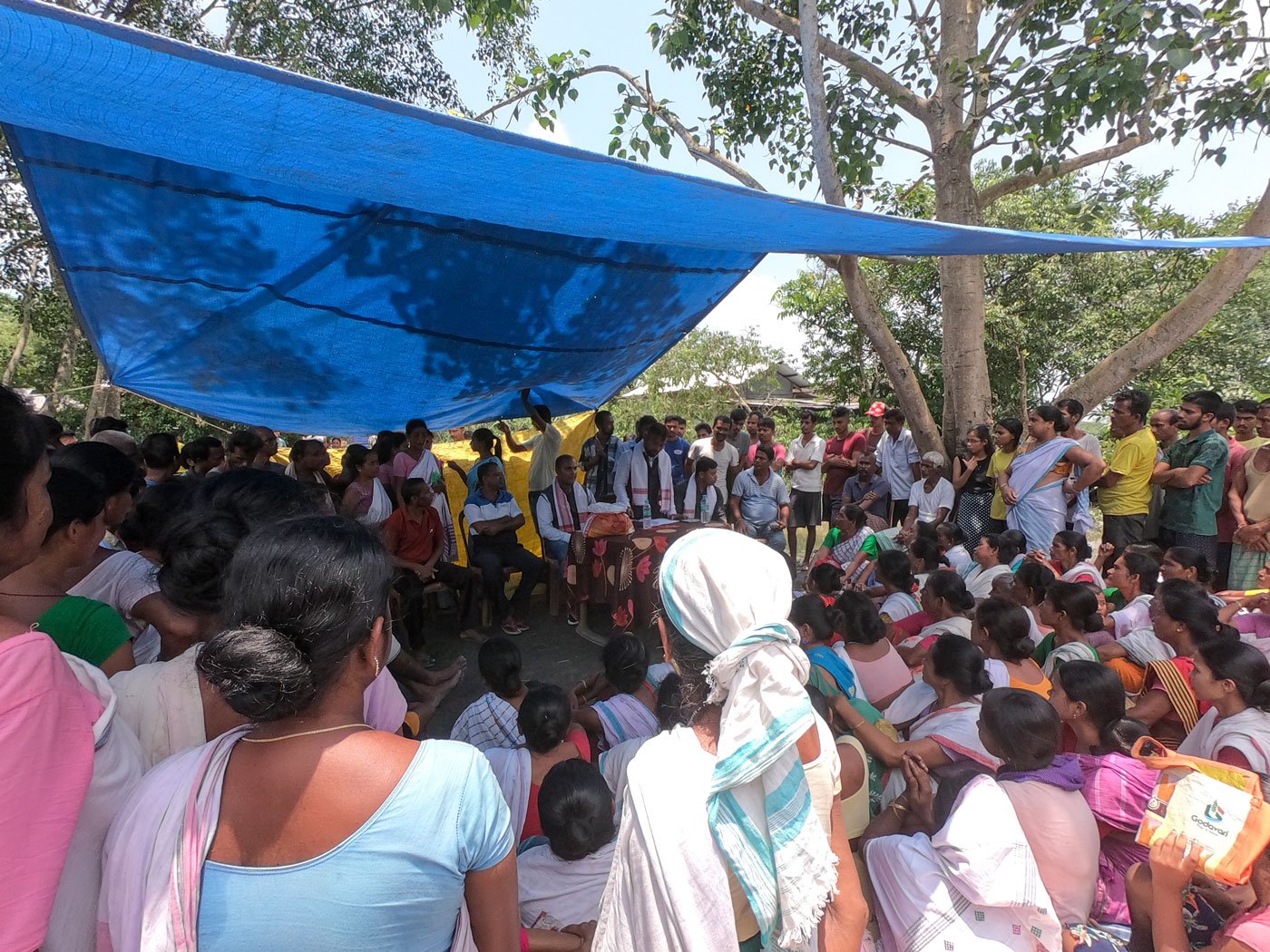 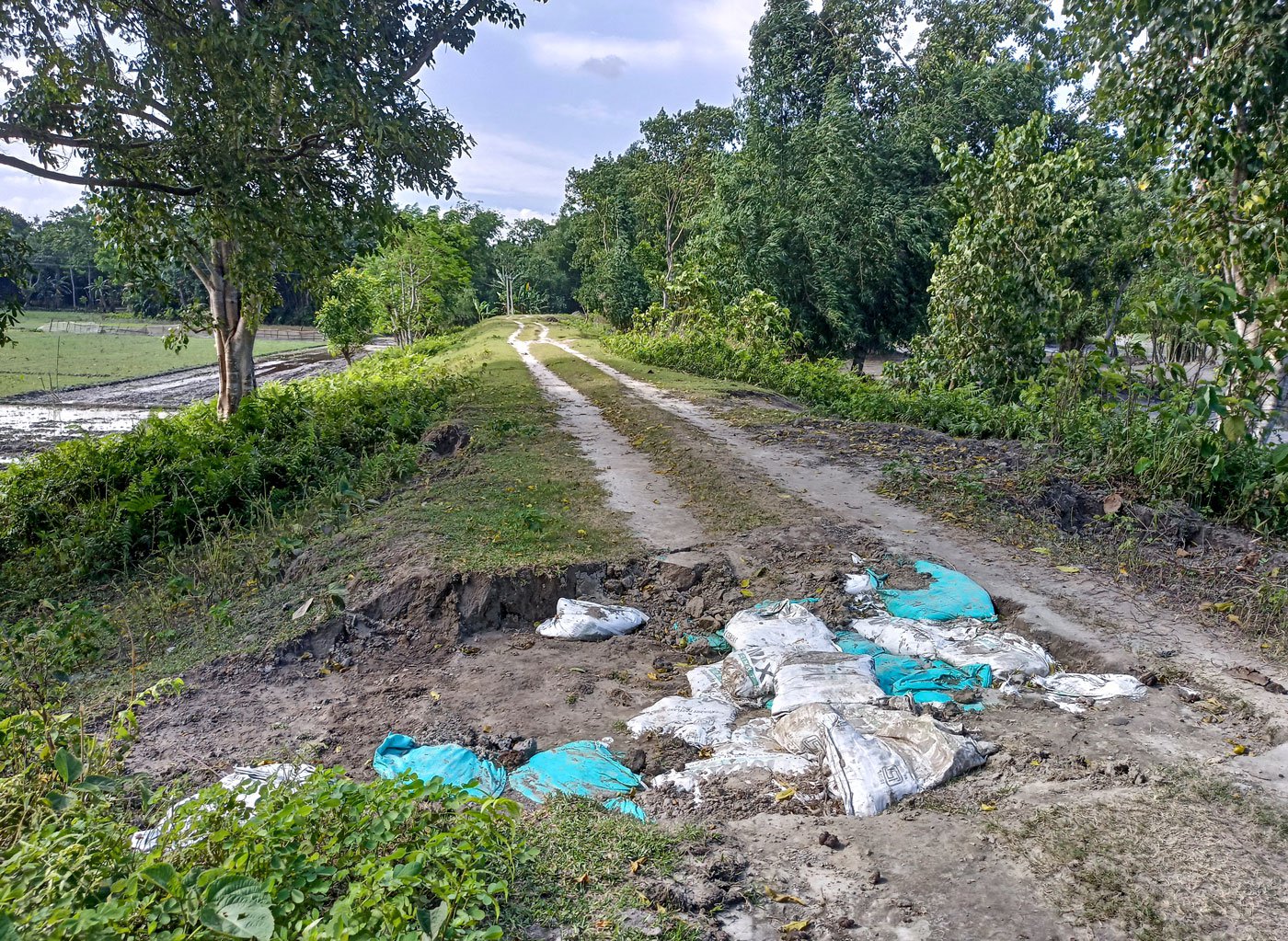 A crumbling portion of the river embankment at Khasdipila village 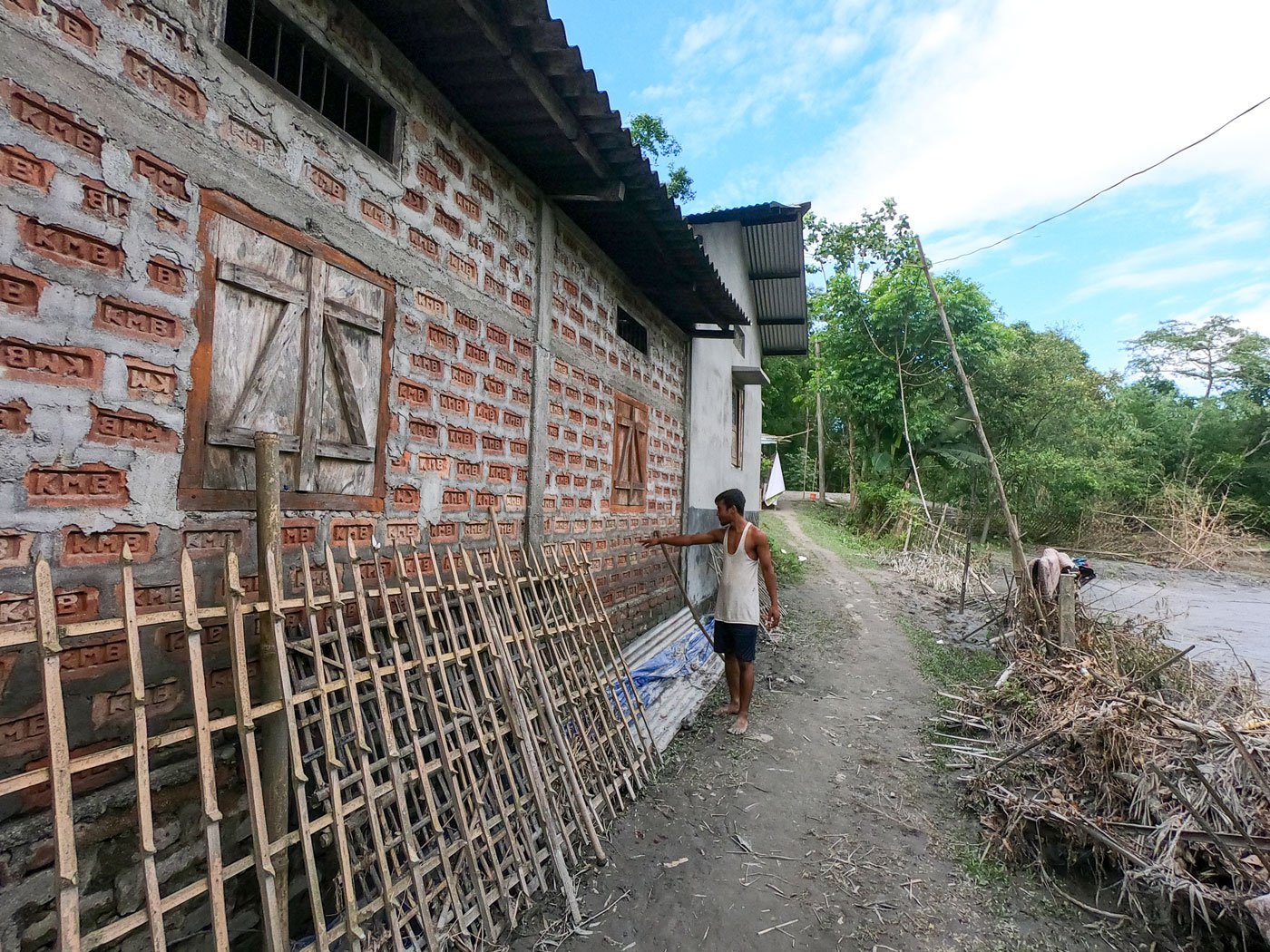 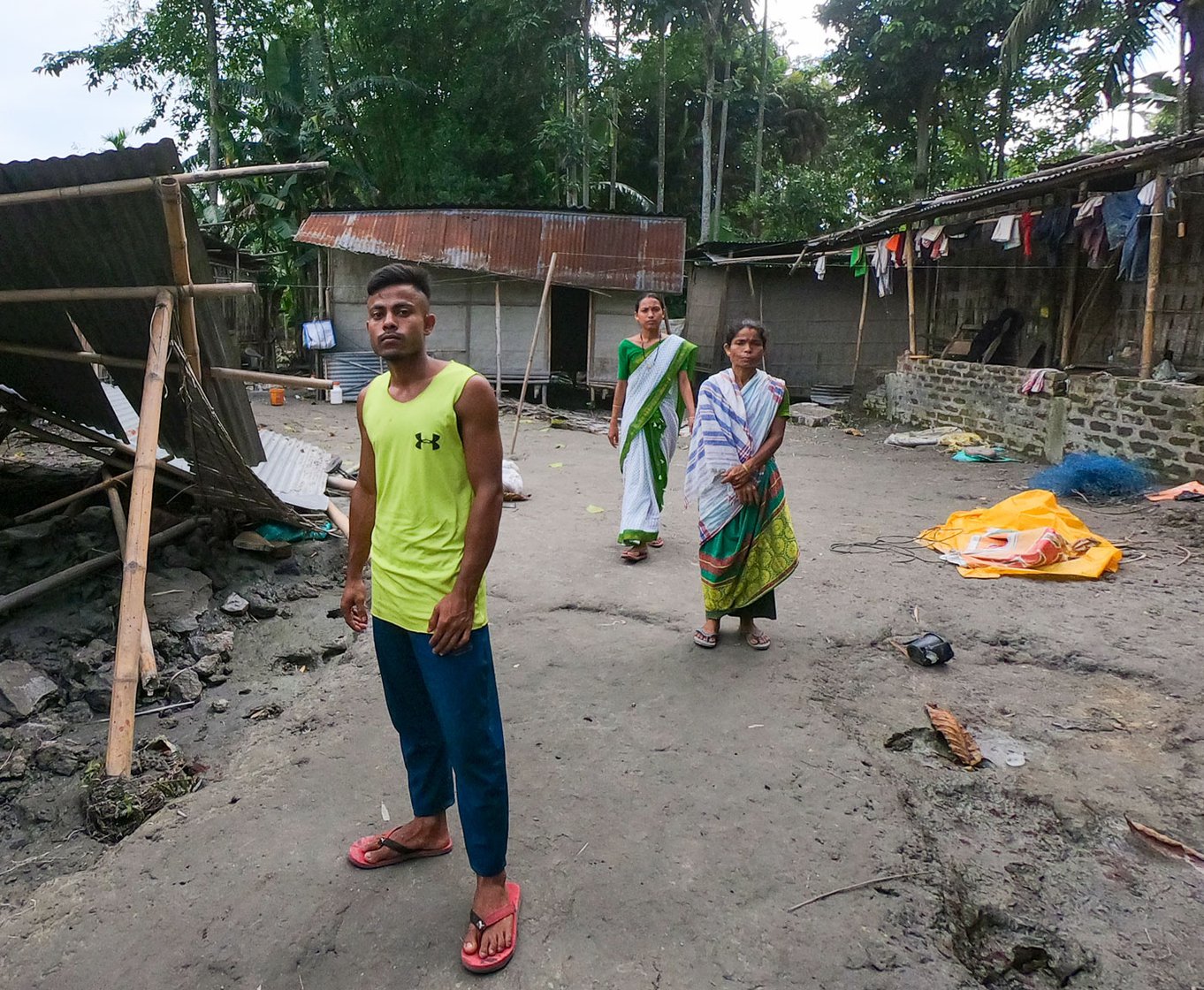 Jaymati (centre), her son and daughter-in-law, next to their ruined home 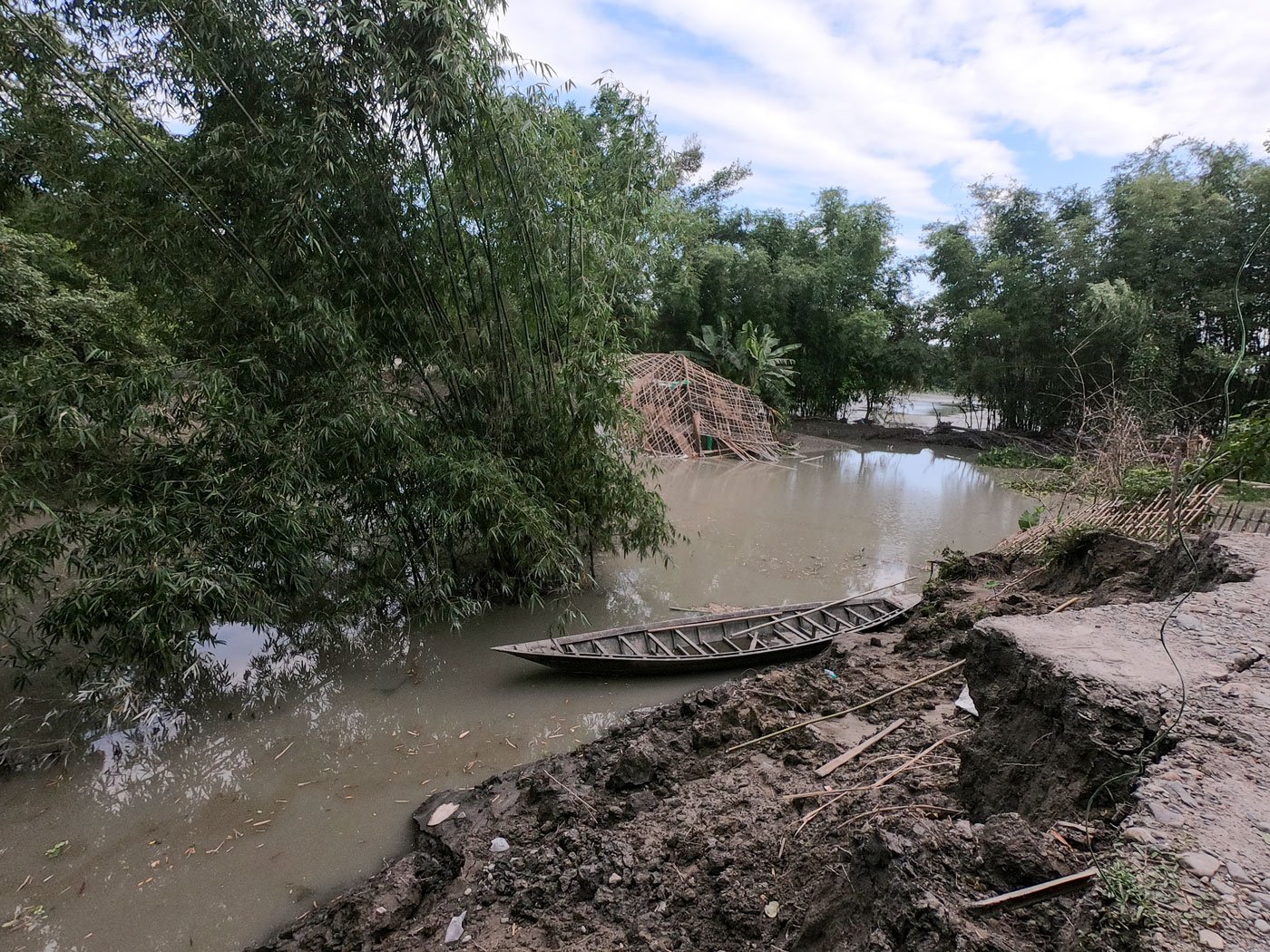 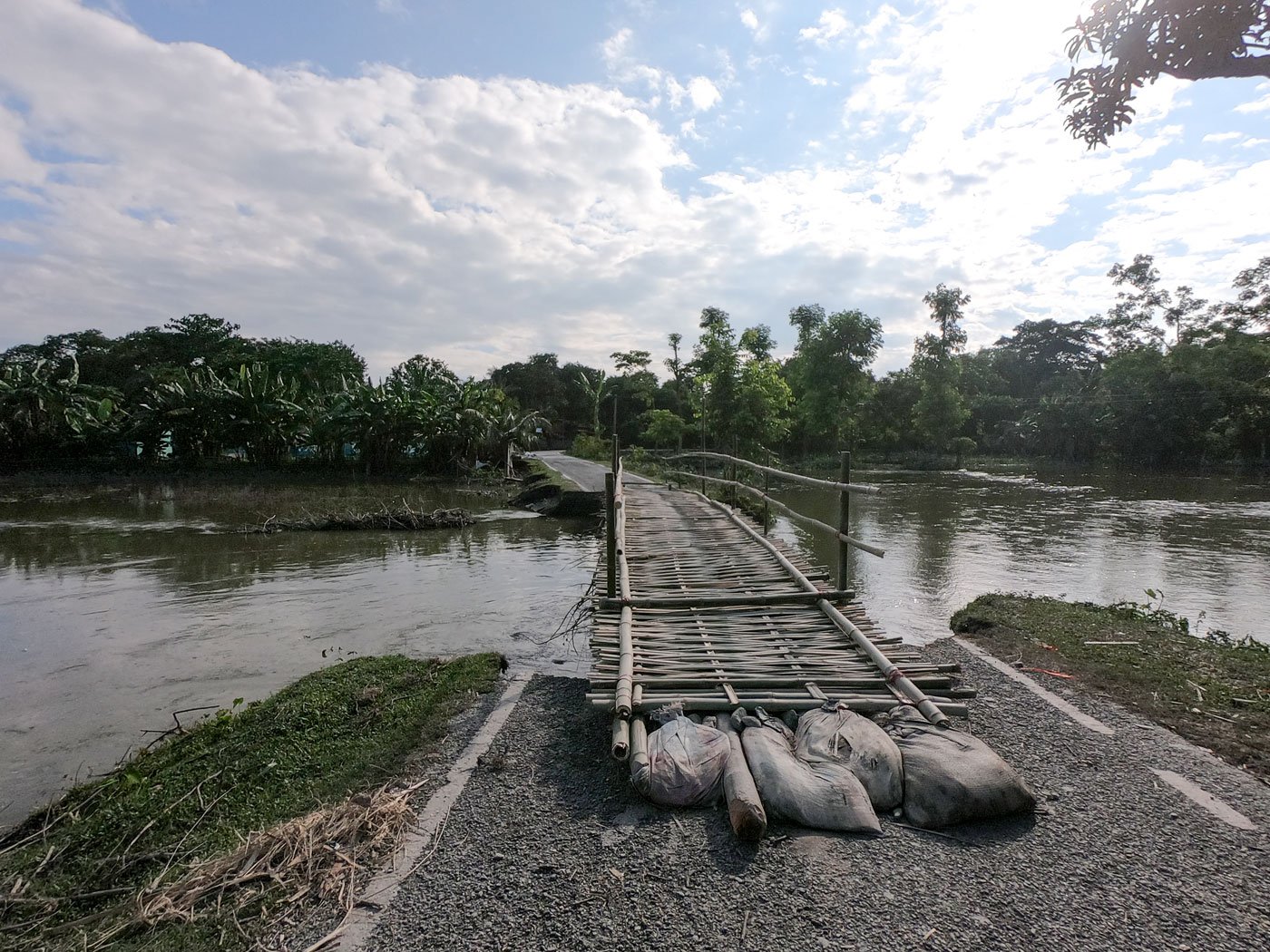 The Dipila-Borbari road, which connects several villages of Darrang district, is broken at several places now

Wahidur Rahman is an independent reporter based in Guwahati, Assam.

Pankaj Das is Translations Editor, Assamese, at People's Archive of Rural India. Based in Guwahati, he is also a localisation expert, working with UNICEF. He loves to play with words at idiomabridge.blogspot.com.

Other stories by Pankaj Das