Leaving farms in search of jobs that don’t exist

Many of the lakhs who take MPSC exams every year, hoping for a job, are from families desperate to leave farming. But the jobs are few, forcing them to migrate for informal work in cities or return home, defeated

Till the age of 20, Angad Salunkhe held on to hope. Then it gave way to anxiety. A few years later, frustration and dejection took over – and eventually Angad accepted failure – that he would not get a job.

In 2003, when just 18, Angad had left his home in Nagapur village in Beed district for college in Beed town, 14 kilometres away. “My parents put together extra money for the rent in Beed,” he says. They worked more hours, borrowed from a moneylender. “Including college fees and other expenses, they must have spent 20,000 rupees in three years.”

After graduating with a BA degree, Angad prepared for the Maharashtra Public Service Commission (MPSC) exam. Clearing it would have allowed him to apply for administrative and civil gazetted posts in the state like deputy collector, deputy superintendent of police, sales tax inspector and others. But the number of candidates far outstrips the number of jobs available. V.N. More, chairman of the MPSC, says, “The total candidates appearing for different kinds of MPSC exams [every year] are 12-14 lakhs and the jobs available are 4,000-5,000. Among that, 2-2.5 lakhs appear for civil services exams [of the total of 14 exams conducted by the MPSC], and the average vacancies are 300-350 – and for 2017-18, [just] around 140 [in the civil services].”

“I worked hard, studied day in day out,” says Angad, now 34 years old, sitting on a bullock cart by his farm. “In 2007, I was shortlisted for the job of a clerk at Beed government hospital, but I did not have anybody who would recommend me.” Such a testimonial is not part of the official process, but part of a system that works on ‘influence’ and networks. 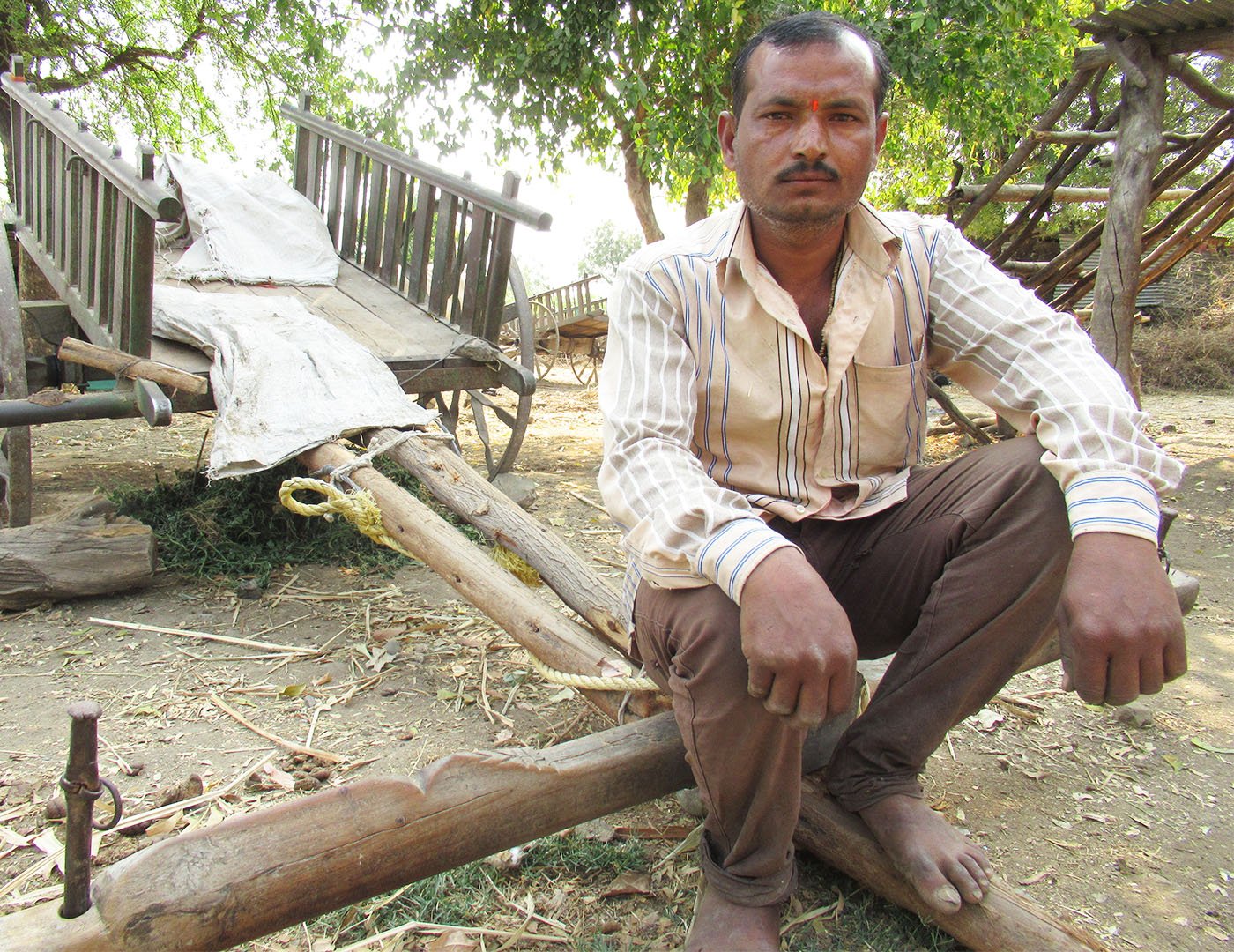 After years of trying for a job after clearing the MPSC exams, Angad Salunkhe, like countless others, gave up and returned to farming

“My parents had hoped I’d not get into farming and would settle down elsewhere,” Angad continues. Looking on, his mother Sudhamati, 60, says farming started becoming more and more uncertain from the early 2000s. “We thought it will only get worse,” she says. “So we doubled up as agricultural labourers, spent minimum ourselves to save for his studies.” Angad is their only child.

Over months of travelling through rural Marathwada, I have not met any parents who want their children to be farmers. In many families, they borrow money despite knowing they might not be able to repay the loan, to fund their sons’ education in bigger towns. Daughters too get a shot at this in some families. But once the young person graduates, the job hunt begins – usually so protracted and futile as to crush his or her hopes and self-esteem.

“Our lives went in the farms, we do not want our son Ganesh to have the life we did,” says Namdev Kolhe. He is an agriculture labourer in Beed’s Devdahiphal village, earning a daily wage of Rs.200-250, averaging Rs. 5,000 a month.  Around five years ago, he borrowed Rs. 3 lakhs from a private moneylender at 4 per cent interest per month. He could not approach a bank because the family does not have land of their own. “We will even steal or do anything, but will ensure Ganesh is not forced back into the village,” says 60-year-old Namdev. “We must have spent close to 2 lakh rupees on his education and expenses so far,”

In 2017, Ganesh got a science degree; since then, he has stayed on in Beed town – 70 kilometres from his village – sharing an apartment at Rs. 700 a month, preparing for the MPSC exams. “My parents are getting old,” he says. “I need to find a job soon, and look after them. I cannot expect them to send me money forever.”

Why has he chosen to wait it out at such high cost? 'What are the returns in farming? Can you be certain of an income?' he replies

Watch video: Ganesh Kolhe speaks of his long wait for a job, and Angad Salunkhe of his defeat

Why has he chosen to wait it out at such high cost, I ask. “What are the returns in farming? Can you be certain of an income?” he replies. “The weather is getting erratic, most of the time even the production cost is not recovered. The life of a farmer is doomed. And when farmers suffer, so do agricultural labourers.”

Like Angad, Ganesh too is preparing for the MPSC exams. “It is so challenging that you cannot do a part-time job and study for it,” he says. “But once I appear for the exam this year, I will find any job, before I hope to find a permanent placement.”

The schedule of the MPSC exam – conducted by an independent body –  has been inconsistent, leaving candidates in a state of uncertainty. In 2016 and 2017, for example, the exams for police sub-inspector jobs were not  announced, and the state did not release applications for the post of talathi (village accountant).

Still, the desperate hope of a steady job means many young students keep trying – and several academies have sprouted up in Beed town to coach them.

At the police grounds in Beed in March, hundreds of young boys and girls were practicing for trials for  police force jobs – stretching, sprinting, doing long jumps – supervised by trainers from these academies.   Just Krishna Pathak’s Yoddha Training Academy has 900 students. Academy owners estimate there are over 20 such institutes in Beed. “The number of openings [for various posts in the police force in Beed] in 2018 are 53,” Pathak says with a regretful smile. “There are kids here who have been trying for years and missing out by the closest of margins. The physical training is demanding. The youngsters put in all their efforts. It is very disheartening.” 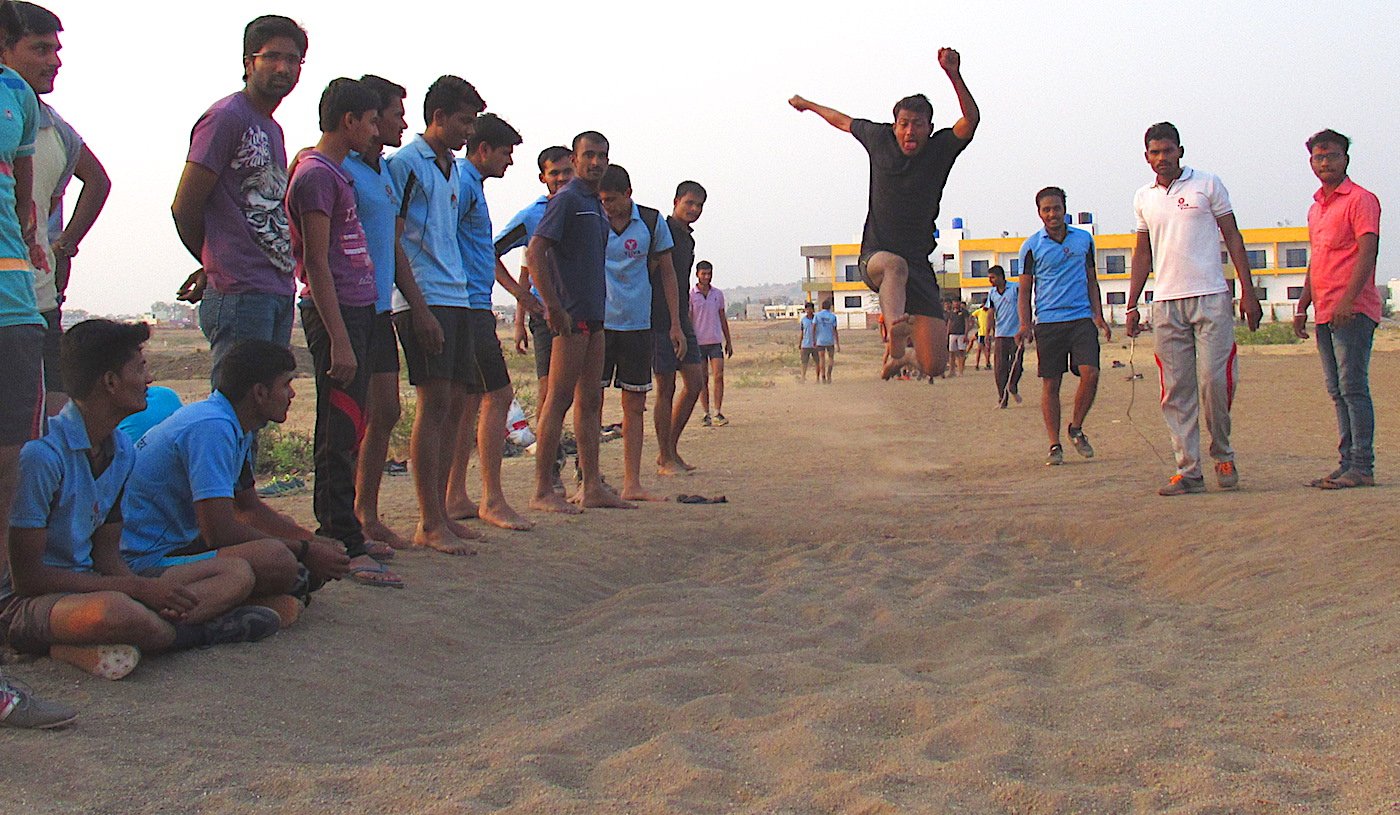 At the police grounds in Beed, hundreds of young boys and girls practice for trials for a handful of police force jobs. 'It is very disheartening', says a trainer

One of his students, 19-year-old Pooja Achare, is from Ashti town, 80 kilometres from Beed town. “I have rented a hostel here at 800 rupees a month, and the mess charges are 1,500 rupees,” she says. “The training is for three months, after which I will see if I get a job in the police force.”

Pooja’s parents are farmers; they grow jowar and tur on their eight acres. The have been supportive, she says, but girls only get one chance. “If I do not get a job this year, I will have to go back and get married,” she says. “That is why most of the unemployed youth are boys.”

Earlier this year, a local activist in Beed, Vachista Badhe, started Sushikshit Berojgar, a network of the ‘educated unemployed’. “I asked around in tuition classes and colleges in Beed,” he says. “And planned a programme where every one of them could express their views so that we could show the government how dire the situation is.”

Within days, around 1,000 youngsters who had studied till Class 12 or above turned up at the event Badhe organised in the last week of February. “They were from Beed town and nearby places who could attend that day,” he says. “Just try to count the number of such youngsters across 11 talukas of Beed… The situation across all of Marathwada is similar.” 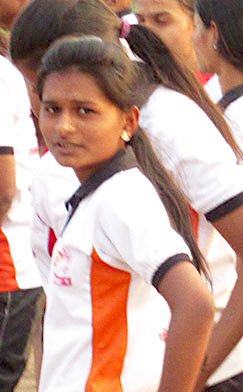 'If I don't get a job this year, I will have to go back and get married', says Pooja Achare (right). 'That is why most of the unemployed youth are boys'

The situation across India is similar. The Mumbai-based Centre for Monitoring Indian Economy estimates that at least 30 million people are looking for jobs in India. The jobs though don’t exist and are even falling. Writing in the Economic and Political Weekly , Vinoj Abraham, economist at the Centre for Development Studies, Thiruvananthapuram, says the picture that emerges from various data sources is that of an absolute decline of employment in India or a sharp decline in the growth of employment – across almost all sectors of the economy.

So while farmers are trying to push their children out of farming due to a growing agrarian crisis, the young people have no jobs to turn to. “When they do not get jobs, they either get back to the farm or most migrate to cities or towns to work as construction workers, drivers or watchmen,” Badhe says. “Merely creating cheap labour for the rich in cities.”

In times like these, swindlers also crop up to exploit the vulnerable and nervous youth. In 2013, Angad, still hoping to get a job, met a man in Beed who promised to recruit him as a village accountant in Nanded. The bribe, he said, would be Rs. 5 lakhs. “We sold an acre of our five-acre farmland and paid him the amount,” says Angad. “And he disappeared. After that incident, I gave up and told myself I must accept that I will never get a job.” Half a decade had passed with Angad holding on to the hope of getting a stable government job, while he did odd jobs to make a living.

The following year, he took up farming, cultivating cotton, jowar and bajra and has been at it since – struggling with it as his parents did. "My father is in his 60s. He has to work as a labourer on other farms. I feel responsible for it,” he says. “If my parents had not spent so much on my studies and my job, I feel their situation would have been better."

Angad has two sons, aged 10 and 8, and a three-year-old daughter. He now harbours the same dreams for his kids that his parents once held on to for him.