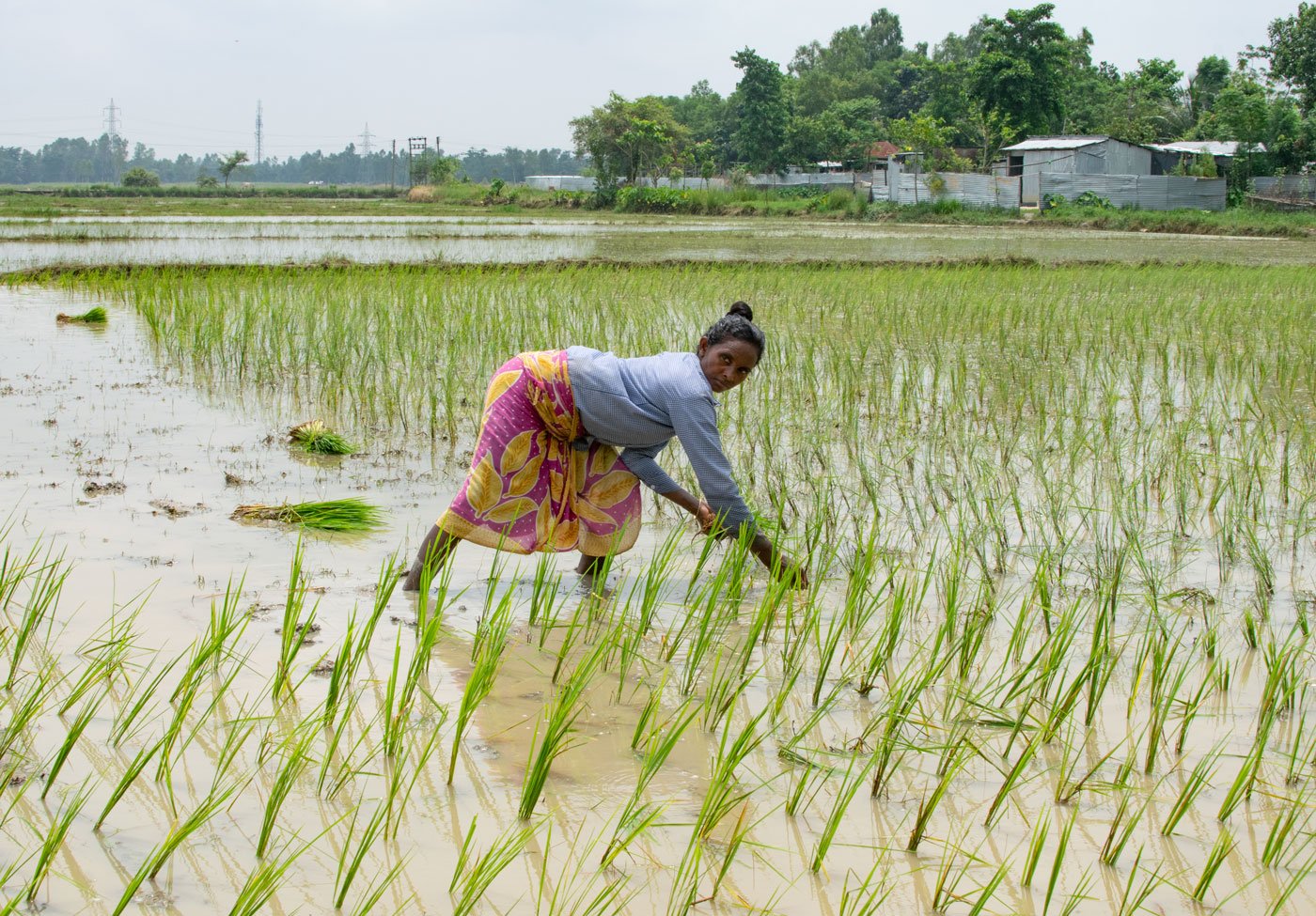 Laxmi Tudu has faced many losses over five years – her husband died, then her brother-in-law and, recently, her daughter. Through all this, she has laboured to support her children, holding on to a handful of hopes

By the time Laxmi Tudu reached the hospital, Kalpana had died. “The girl was so hungry that morning. I wanted to take rice for her but I was late,” recalls Laxmi. “It was raining heavily.”

It was June 2020, and her 26-year-old daughter Kalpana had been hospitalised because of a headache and incessant vomiting. Laxmi’s middle daughter Shibani was with her sister at the hospital.

Kalpana had been undergoing treatment at a private diagnostic centre since 2017, when the doctors at the government-run Sub-divisional Hospital in Gangarampur – locally known as Kaldighi hospital – had advised her to consult a private neurology specialist. Her condition worsened in 2019, after the birth of her second son.

With the lockdown in March 2020, her doctor’s monthly visits to the diagnostic centre from Kolkata became irregular. “We would wait but his dates were constantly postponed,” recalls Laxmi. “So we bought the same prescribed medicines again and again.”

Kalpana had got married in 2014, when she was a first year BA student in Gangarampur College. Her 29-year-old husband, Nayan Mardi, ran a grocery store and did part-time tailoring in Anantapur village, around 17 kilometres from Gangarampur town in West Bengal’s Dakshin Dinajpur district. Her parents-in-law were agricultural labourers. A year later, after the birth of Kalpana’s first child, a boy, her acute headaches – which she’d had since childhood – began to get worse. 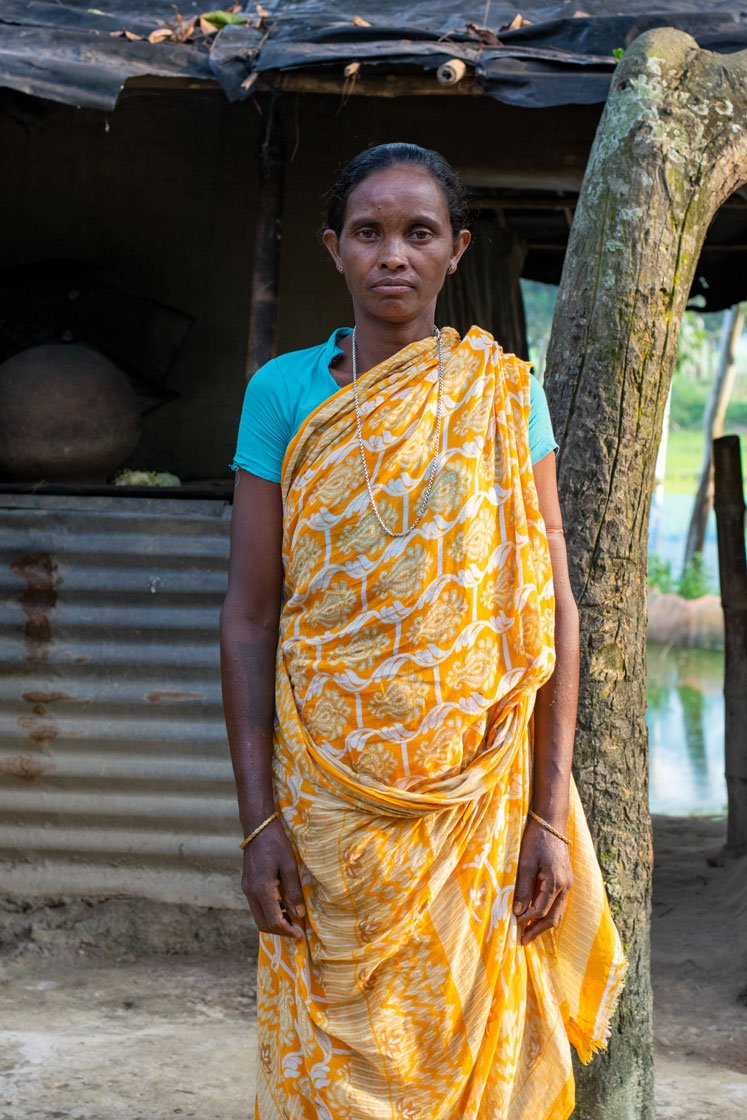 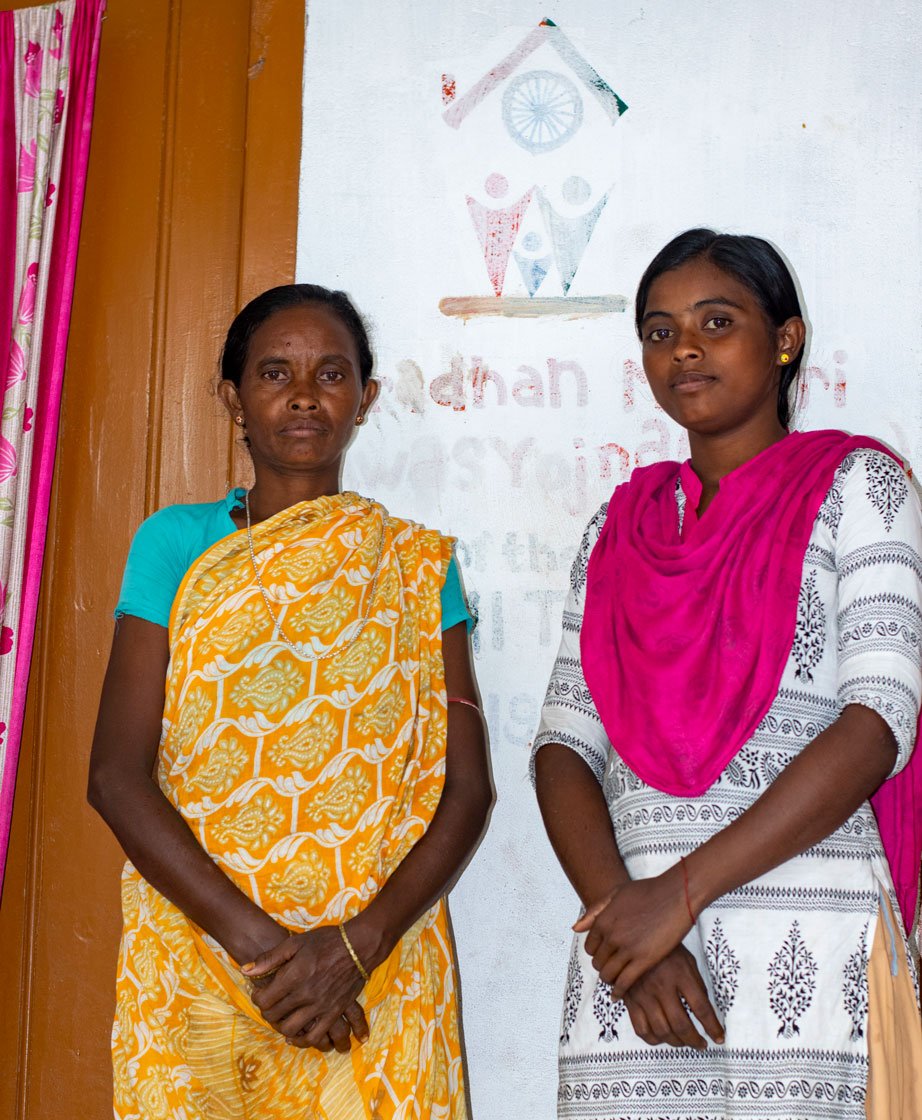 Her husband's death in 2016 left Laxmi Tudu as the sole earner and parent for their four children, including Shibani (right)

On June 28 this year, when she was hospitalised, Nayan, along with her younger sister Shibani, hired a car to go from Anantapur to Kaldighi hospital. Laxmi – visibly distraught as she remembers this – is unclear about what happened at the hospital. All that she remembers is that Kalpana died the next morning.

This came less than five years after Laxmi lost her husband in January 2016. Jyethu Tudu’s clothes accidentally caught fire from the hay that he had lit to keep warm on a winter evening. Before Jyethu, 58, became nearly bedridden for a decade due to tuberculosis and liver ailments, he used to ply a cycle rickshaw in Gangarampur town. “We took him to Kaldighi hospital,” Laxmi recalls. “He died after 16 days.”

That left Laxmi as the sole earner and parent for their three daughters – Santana, now 30, Kalpana, who was 26, and 21-year-old Shibani – and 15-year-old son Shibnath.

“I was full of sorrow. Three girls and one small boy. I’d have to bring them up alone,” says Laxmi – she belongs to the Santal community, a Scheduled Tribe – speaking to us in the courtyard of her house in Gangarampur. “I coped with great pain. You won’t find me sitting idle even for a day,” she adds. “I work every single day. This is how I brought up my children.”

Just 11 days after Jyethu’s passing, his 53-year-old brother Sufal Tudu, who worked as a mason, passed away due to a stroke he suffered while going around inviting relatives for Jyethu’s funeral feast. 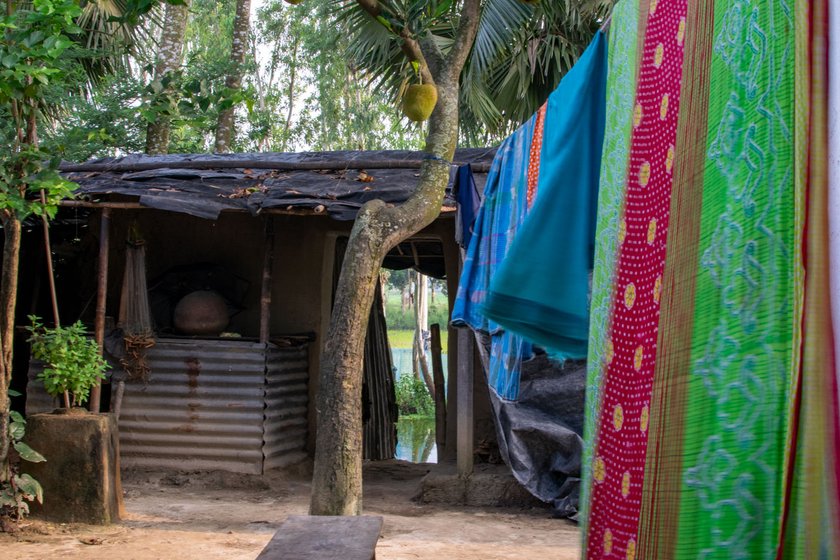 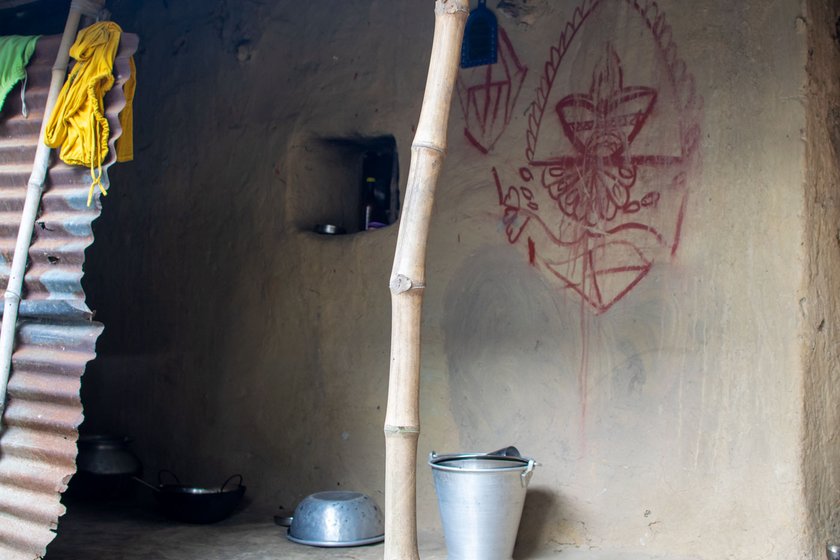 Built under the Pradhan Mantri Awas Yojana, Laxmi's house has a small pond in the backyard (left), and a kitchen with tarpaulin and tin walls and a mud floor (right)

Laxmi now lives in a two-room structure built in 2016 under the Pradhan Mantri Awas Yojana. The house has a small pond in the backyard, along with a kitchen with tarpaulin and tin walls and a mud floor. She shares her plot of land – with her sister-in-law Hisimuni, Sufal Tudu’s widow, who lives in a mud hut. Both women work as agricultural and construction labourers.

“My father said that I was two months old when Jai Bangla [a local term for viral conjunctivitis, which got its name from the epidemic that struck India during Bangladesh’s liberation war in 1971] was happening,” says Laxmi. That would make her 49 years old, though her Aadhaar card says she is 55. As a child, her frequent headaches, much like her daughter Kalpana’s, kept her from attending school regularly – she completed only Class 1. So Laxmi’s parents – her father was a mason and her mother an agricultural labourer in Gangarampur – gave her the task of looking after their cattle.

“I do not know how to read and write,” says Laxmi, though her two sisters studied till Class 10. Perhaps that’s why her children’s education became even more important for her. Soon after Jyethu’s death, one of Laxmi’s sisters took Shibnath to stay with her in Nandangaon village of the neighbouring Uttar Dinajpur district. She works at the local anganwadi and is helping with the with the boy’s schooling . “I will bring him to stay with me after the board examinations are over,” Laxmi says about Shibnath, a Class 10 student.

Laxmi does not own any farmland, and her husband’s land (she prefers to not speak about this in any detail) had to be sold to pay for the weddings of their elder daughters – Santana in 2007, and Kalpana in 2014.  Santana, a homemaker, lives in Sutail village, around 12 kilometres from Gangarampur, where her husband is an agricultural labourer and part-time private tutor.

In August 2020, when the kharif plantation of paddy was in full swing, Laxmi had enlisted the help of Shibani – her youngest daughter – to work in the fields of neighbouring landowners. 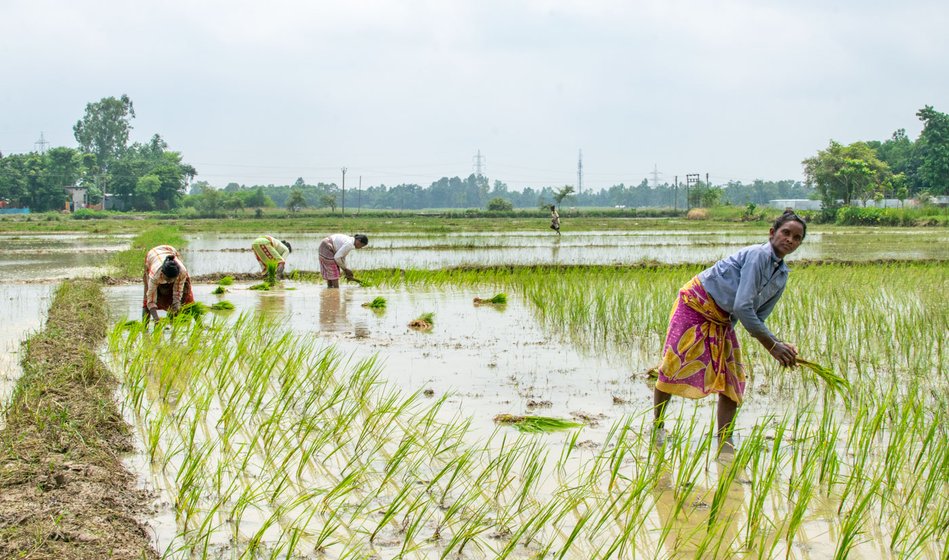 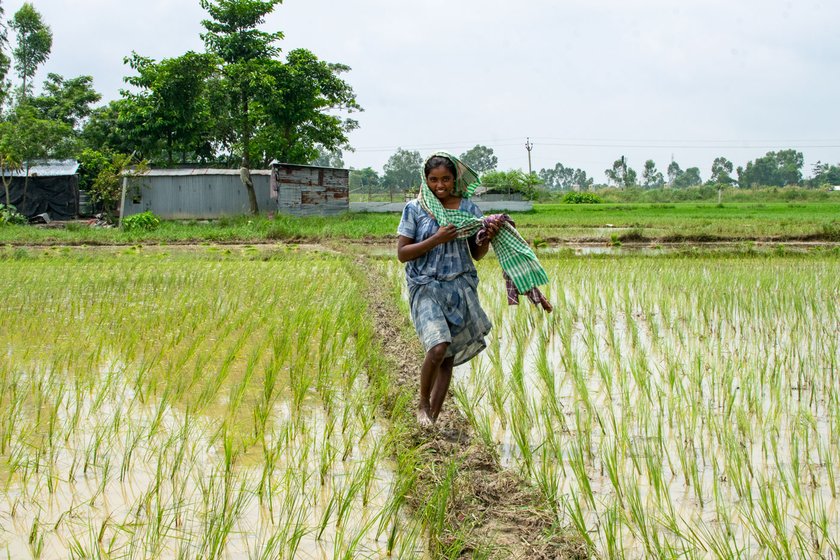 In August 2020, when the kharif plantation of paddy was on, Laxmi (left) had enlisted Shibani's (right) help to work in the fields

In these parts, paddy is sown sometime from June to August and harvested between October and December. Laxmi helps cultivate other crops too – mainly jute, but also mustard, potato and chili. At times, in July and August, the jute harvest and paddy planting activities coincide. Laxmi prefers work in paddy plantations, she finds jute harvesting more strenuous. But she often doesn’t have much choice.

“In total, we work for 2 to 3 months in the field every year and the rest of the year we work as construction labourers,” says Laxmi, who also does odd jobs like repair work on houses now and then. But construction work in and around Gangarampur municipality is not easy to find for farm labourers, she adds, because labourers like her are not on the contractor’s regular payroll. Many times, she has to wait for several days to get work.

Construction jobs offer a fixed daily wage of Rs. 200 for ‘unskilled’ labourers like Laxmi, whereas working in a farm means earning anywhere from Rs. 150 to Rs. 300 per day. (The minimum daily wage for unskilled work in West Bengal is Rs. 257.) Along with her average monthly income of Rs. 4,000 to 5,000, Laxmi relies on the public distribution system for essentials such as rice, atta and kerosene. She has a Priority Household ration card, which entitles her to rice, wheat, sugar (which is usually not available) and kerosene at subsidised rates.

In the farm season, Laxmi begins her day at 4 a.m., with household work, and leaves for work four hours later. Her daughter Shibani is not required to do housework after helping her mother in the fields. “I let her study whenever I can manage,” says Laxmi. 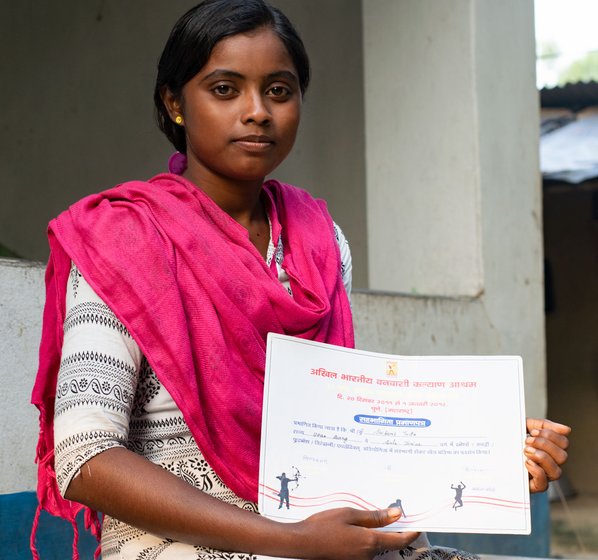 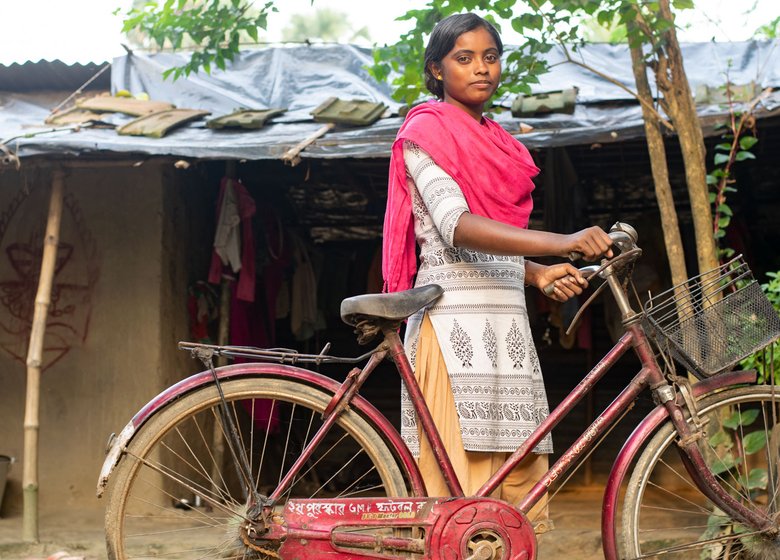 Shibani has participated and won prizes – including a cycle – in many sports events, but she had to give up these activities to help her mother earn

Shibani – a second year BA student in Gangarampur College – wants to join the National Cadet Corps (NCC, affiliated to the Indian armed forces) unit of her college. She is an sportswoman, and showed me her certificates of participation in the state-level kabbadi championships in Kolkata in 2011 and 2012. At 13, she had represented the Uttar Banga region (comprising West Bengal’s northern districts) in a national-level kabbadi championship held in Pune in 2011. She shows us, with pride, the bicycle she won in a local marathon in 2013.

But Laxmi is not willing to let Shibani join the NCC. “It means additional expenses for dresses,” says Laxmi, “and she would then have to go college every day.”  Shibani goes to college only for exams and other important days. She has to help her mother work in the farming months.

"I felt very sad,” says Shibani, about having to give up her NCC dream and keep aside her sports activities. “But then there is no other way.”

Laxmi knows that it will be difficult for Shibani and Shibnath to find jobs despite their education. “The times are not good. I need a good result [for my children],” she says. “But I am not holding on to any hopes.” Laxmi supports Shibnath’s dream of joining the armed forces. For Shibani, however, marriage is all but imminent, and  the search for a suitable groom is underway.

“I’ll then have to continue in the same manner [as my mother], dependent on farming,” Shibani says. She is learning tailoring from a relative, and hopes to help Laxmi by opening a shop one day.

Other stories by Saurabh Sarmadhikari