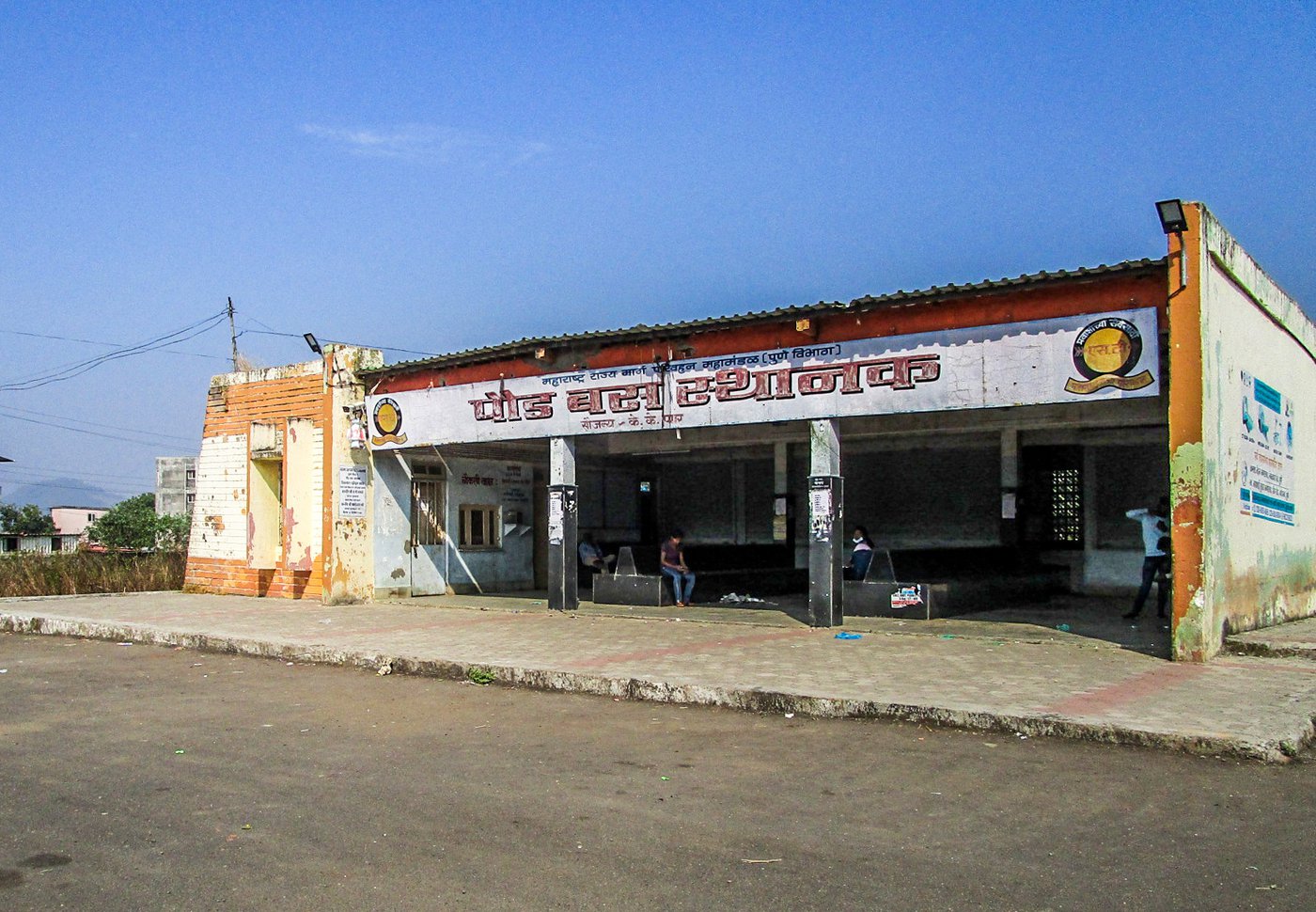 In Pune: ‘ST bus is a lifeline for villagers’

The state transport employees strike – for better pay and regular salaries – has brought buses to a halt in Maharashtra since October 27. The empty bus stands, limited travel options have hit rural commuters hard

Suresh Mehendale is worried about his beloved bus stand. The premises may not have been cleaned in his absence. And the puppies he lovingly feeds biscuits every day must be hungry, too. The enquiry booth which he occupies at the bus stand in Paud, in Pune district’s Mulshi taluka , has been locked for over a month. It is from there that he coordinates arrivals and departures of the state transport buses that go through Paud.

“I have not been to Paud for the last 28 days. I hope everything is okay [there],” Mehendale, 54, told me when I met him on November 26 at Swargate bus depot in Pune city, about 35 kilometres away from his bus stand. He has been sitting on strike with fellow workers from Maharashtra State Road Transport Corporation (MSRTC), in a tent at the depot’s entrance. MSRTC employees from all over the state have been on an indefinite strike since October 27 this year.

About 250 conductors and 200 drivers of the state transport (ST) buses in Pune are taking part in the strike. “It began with a protest against the deaths [by suicide] of state transport workers. At least 31 workers have ended their lives in the last year,” explained Mehendale. Two more workers died by suicide within three days of meeting him. Delays in salaries have been causing hardship to ST workers, and the situation worsened after the outbreak of Covid-19 and the corporation had no income apart from transporting goods. 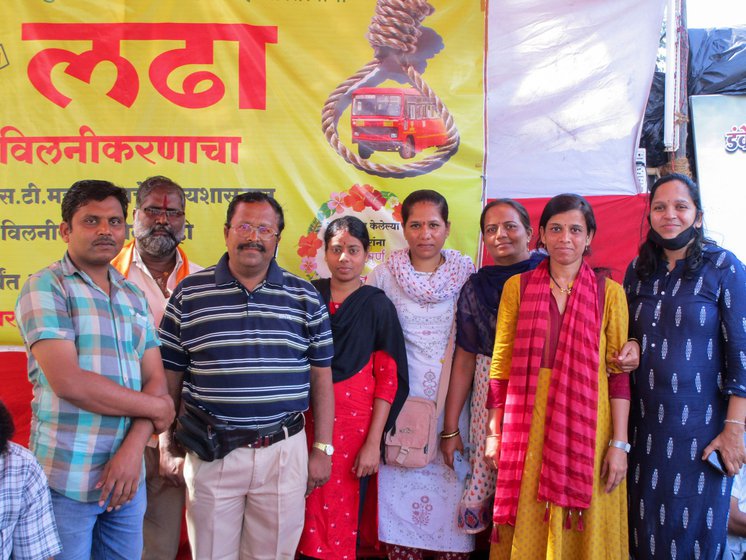 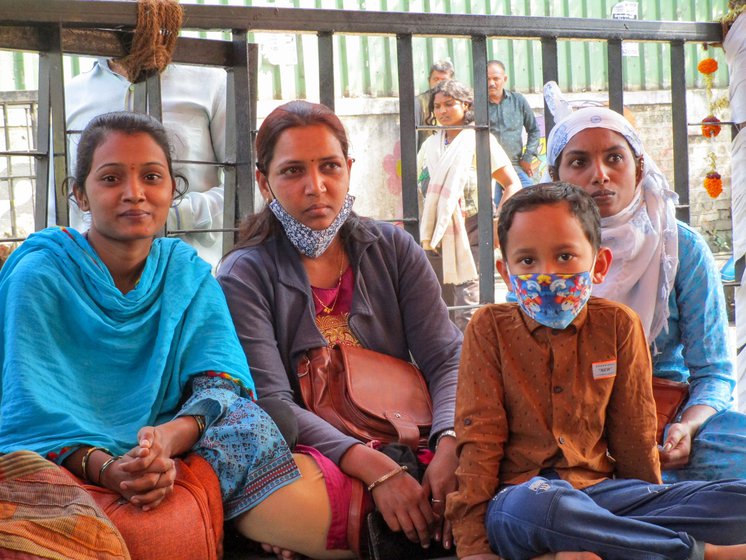 A hunger strike by MSRTC staff in Mumbai on October 27, to highlight the workers’ deaths, sparked a full-blown protest across the state the next day, reiterating the long-standing demand for a pay hike and payment of dues. “And we are pressing for the merger,” added Mehendale, referring to the demand to merge MSRTC with the state government. The workers want to be on a par with state government employees and receive the same pay scale and other benefits.

Incorporated by Maharashtra state government under the provisions of Road Transport Corporations Act of 1950, MSRTC is an autonomous entity. The corporation – which operates 250 depots and 588 bus stands, and has about 104,000 staff – provides passenger transport services all over the state under the motto, ‘ Gaav tithe rasta; rasta tithe ST (A road for each village; an ST bus for every road)’.

Vrundavani Dolare, Meena More and Meera Rajput, all in their mid-30s, strongly support the workers’ demands. They are among the 45 women conductors working at Swargate depot, who believe that the proposed merger is the only solution to their problems. “We work for 13-14 hours daily, but get paid for 8 hours. We do not have any grievance redressal for our complaints,” says Meena. “Not a single ST bus has left the depot since October 28. We will not back down till the state government accepts our demand for the merger,” she adds.

“All 250 depots are closed and almost one lakh workers including drivers, conductors and workshop employees are on a strike. Only a few contractual workers are back,” says 34-year-old Anita Ashok Mankar, a conductor at the Swargate depot for the last 12 years. Originally from Amaravati district, Anita lives in Matalwadi Phata near Bhugaon in Mulshi. She is often on duty on the Pune-Kolwan bus route. 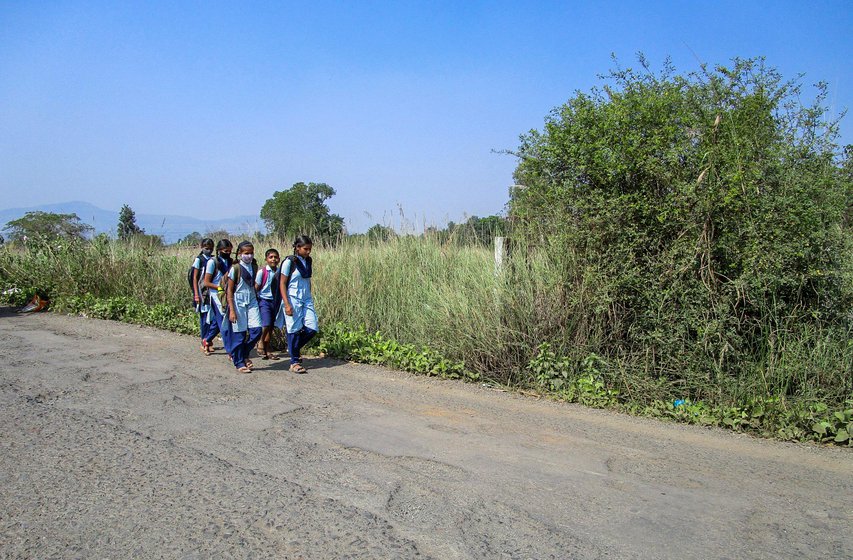 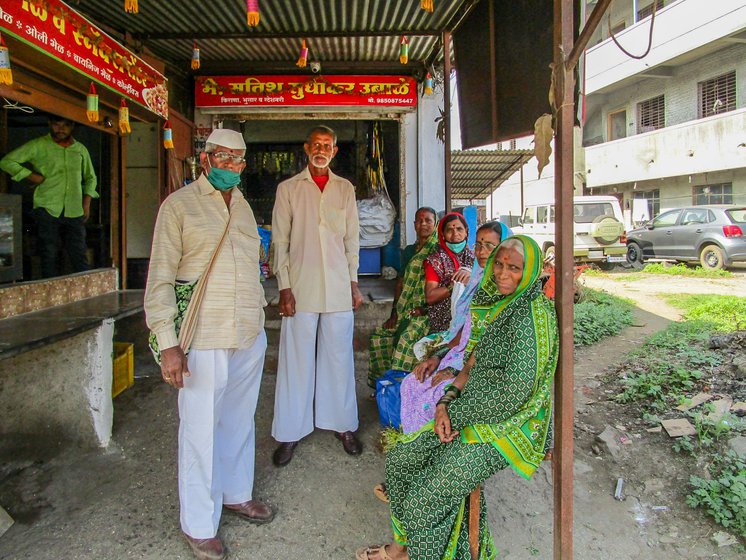 Left: School children near Satesai walking to school to Paud, 10 kilometres away. Right: Shivaji Borkar (second from the left) and others wait for a shared auto to take them to their onward destination from Paud

However, the veteran labour leader Pannalal Surana said in an interview with Maharashtra Times that a merger would be a bad idea. A former president of Maharashtra Rajya ST Karmachari Sanghatana, who served in that role for nearly 17 years, Surana added that he supported the demand for more pay. The state road transport corporation, he said, was established to ensure quick and independent decisions without waiting for permissions from government departments.

Some protesting workers are seeking parity of pay from MSRTC. “We are paid lesser than our male colleagues, and we are also not paid on time. We want these issues to be resolved,” said 24-year-old Payal Chavan. She and her colleagues Rupali Kamble and Neelima Dhumal were recruited three years ago to the workshop section of Swargate depot, to assist with mechanical and eletrical maintenance work.

MSRTC’s Pune division is said to be suffering losses to the tune of Rs. 1.5 crores every day of the strike. Barring  the air-conditioned buses operated by private parties, its fleet of 8,500 buses have not been in service, affecting the mobility of an average 65,000 passengers that they transport daily.

The impact is evident in Paud. These days, Shivaji Borkar is forced to take a shared auto from Paud. He travels 40 kilometres almost every week, from Pune city to his farm in Rihe, a village in Mulshi. The only public transport he uses now is the bus from Pune’s Marketyard to Paud, operated by Pune Mahanagar Parivahan Mahamandal Ltd. 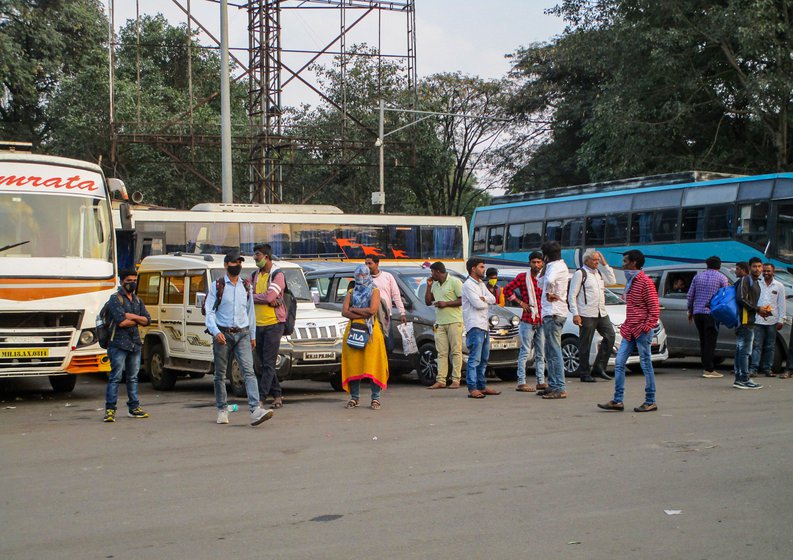 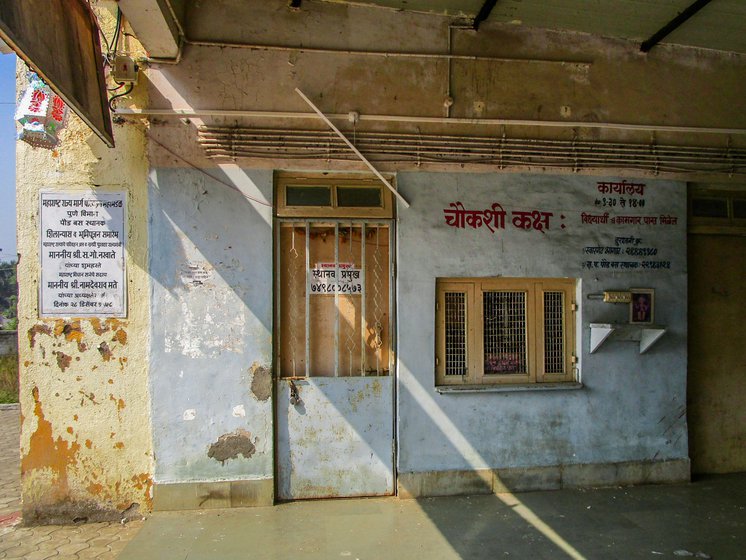 Left: Commuters have had to turn to other modes of transport from Pune city due to the ST strike across Maharashtra. Right: The locked enquiry booth at Paud bus stand

When I met him on November 27,  Borkar and five others were at a small shop waiting to go further in an auto. It had been two hours, but the six-seater vehicle would leave only after it filled up 14 seats – 8 in the middle, 4 in the back and 2 on either side of the driver. “What else can we do but wait?” Borkar said. “ST bus is a lifeline for villagers. It is almost a month and there are no buses.” The autos charge them double the bus ticket, he said, while ST buses charge the senior citizens half the price.

The bus stand in Paud, from where five buses ply daily to Kolwan (in Mulshi taluka ) and Javan and Talegaon (in Mawal taluka ), is deserted these days. A group of three girls who were waiting for their friends there spoke to me, but did not wish to share their names or get photographed. “My parents refused to send me to a college after the lockdown. Commuting was costly. I had a free bus pass till [I was in] Class 12,” one of them said. All of them had discontinued their studies after Class 12. Cost of transport is often cited as a reason by families to stop educating the girls.

The same day, I counted at least eight groups of students walking to school on the 12-kilometre stretch between Paud and Kolwan. In Satesai village, a girl rushing to her school in Paud, told me, “We were eagerly waiting to go to school [opened after the Covid-19 lockdown]. But now there are no buses and we have to walk.” The state transport bus gives a free travel pass to girls studying in classes 5-12, but it works only if buses are on the road.

“We serve people, the poorest of poor people. We know that they are suffering, but we can’t let this go. I am sure our people will understand,” says Mehendale, who has worked at MSRTC for the last 27 years. He passed the Traffic Controller exam in 2020 and is hoping to be promoted to the post. But he knows that it can happen only after the wheels of ST buses start turning again. For now, the bus stand he looks after is awaiting his return.