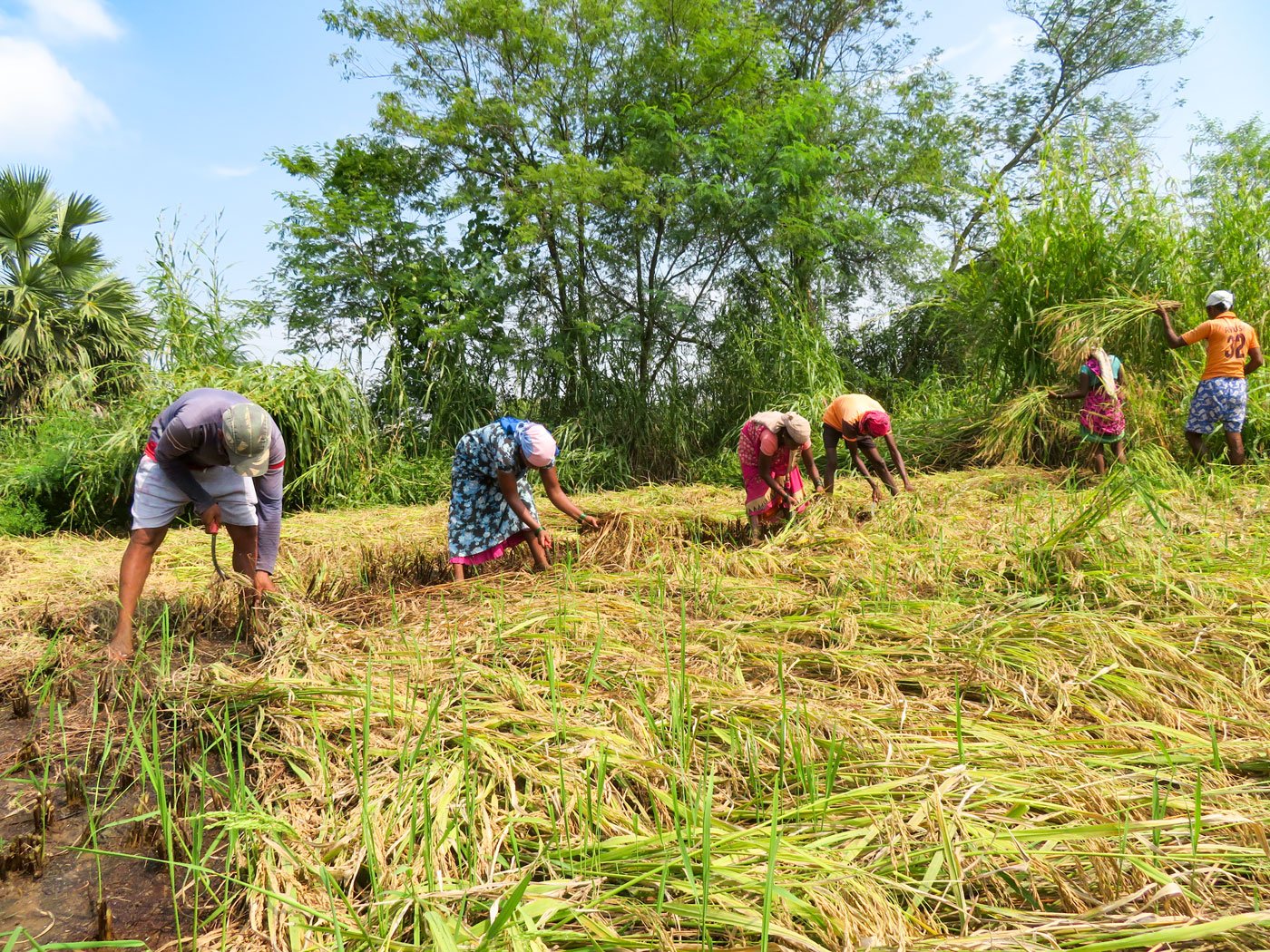 In Gates Budruk and other villages of this district in Maharashtra, due to excessive rainfall in October, paddy farmers are still grappling with damaged crops, a poor harvest, unpaid loans, and no signs of compensation

“It used to feel like a festival in the village,” said Nanda Gotarne. Towards the end of October every year, the ground next to her field would turn into a collective threshing venue, where the farmers of Gates Budruk would thresh freshly harvested paddy with the help of bullocks. They would continue the process till around the middle of November.

This year, the ground and fields had turned into a marshland by the middle of last month. Instead of preparing to thresh the harvested grains, Nanda and her husband Kailash had to clear the crop on their two acres on October 16 and 17.

Two days later, there was still ankle-deep water in their field, and 42-year-old Nanda was drying drenched paddy stalks under the sun. “I don’t know if this drying will help or not…” she said, wiping away tears with a corner of her saree. (It eventually did help and she managed to get six quintals of poor-quality rice husk after threshing the paddy – much less than last year’s harvest of around 15 quintals). Nanda’s husband Kailash, 47, works as an assistant in a private office in Vada taluka , earning around Rs. 8,000 a month. They have a 14-year-old daughter and 10-year-old son, both studying in the local zilla parishad school.

Unexpected rainfall in October had hit Nanda's family and all the other farmers in Gates Budruk, a village of 1,134 people

Kamini Gotarne’s field had become a swamp too. “The paddy is completely drenched. It’s full of mud,” she said. She and her husband Manoj were also clearing the damaged crop on their four acres in October, cutting flattened paddy stalks with a sickle. Four other farmers were helping them – everyone was pitching in on each other’s farms in the village. 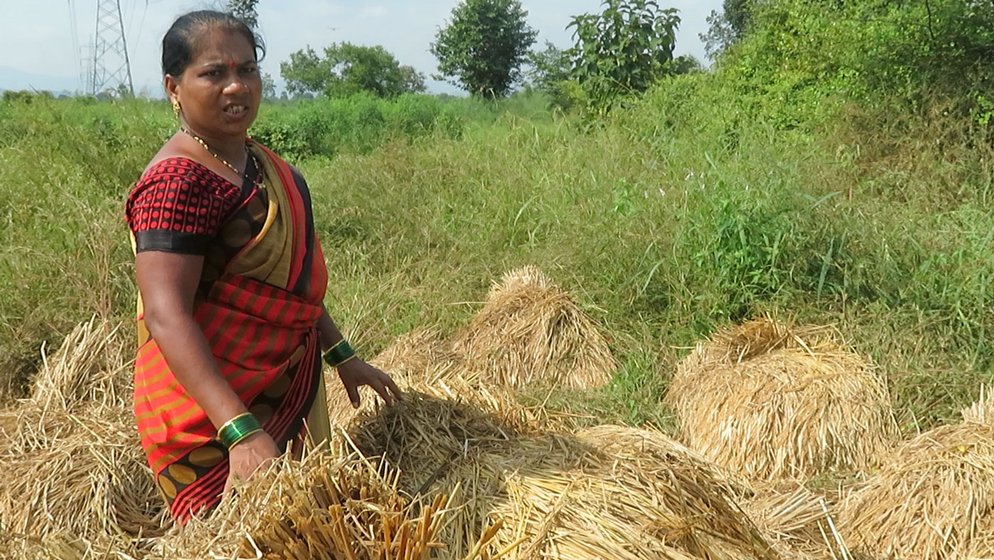 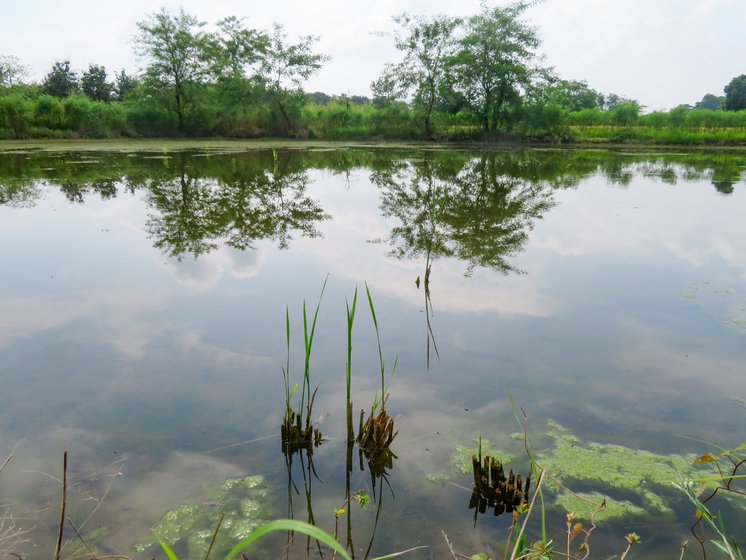 Nanda Gotarne drying paddy stalks; the accumulated water in her farm, which damaged the crop, remained after the stalks were cut (right)

“See these large roots? The husk has sprouted because the crop remained in water. Now the rice from this husk is of no use,” said 45-year-old Manoj, when I visited the farm on October 19. “Even a little rain is bad for mature crops. Almost 80 per cent of the paddy is damaged now.”

That little rain was barely 9 mm more than usual. But along with water-logging, it can destroy a mature paddy crop. In Maharashtra’s Vada taluka , where Gates Budruk is located, it rained around 50.7 mm between October 1 and October 21 – the normal rainfall during this period is 41.8 mm. The India Meteorological Department had issued a warning on October 13 of heavy rains and wind in the Konkan and other regions of India.

The rain, along with strong winds, flattened the paddy. The crop on Kamini and Manoj’s farm was submerged for three days from October 13. Usually, every year, the family harvests 15 to 20 quintals of rice of the vada kolam variety by the end of October. They sell 7-8 quintals to Mahamandal (the Food Corporation of India, Maharashtra region) for around Rs. 2,000-2,200 a quintal, and keep the rest for their own use. But this year, said Kamini of the submerged paddy, “We can’t eat the rice of this husk, nor can we even use it as fodder for our cow and buffalo.”

Without any irrigation, the Gotarne family is unable to cultivate rabi crops. So Manoj also runs a grocery shop in the village, selling flour, soaps, biscuits, notebooks and other items. From this, he and Kamini – they belong to the Agri community, listed as an OBC, and have a 13-year-old daughter, Vaishnavi, who studies in Class 7 at the local zilla parishad school – earn around Rs. 10,000 a month.

They spent Rs. 15,000 for the paddy sowing in June this year – on seeds, fertilisers, labourers, a rented tractor. Sluggish rainfall of 203 mm in the district in June (the average in Palghar for the month is 411.9 mm), had picked up by the end of the season in September, and given Manoj and Kamini hopes of a good yield. 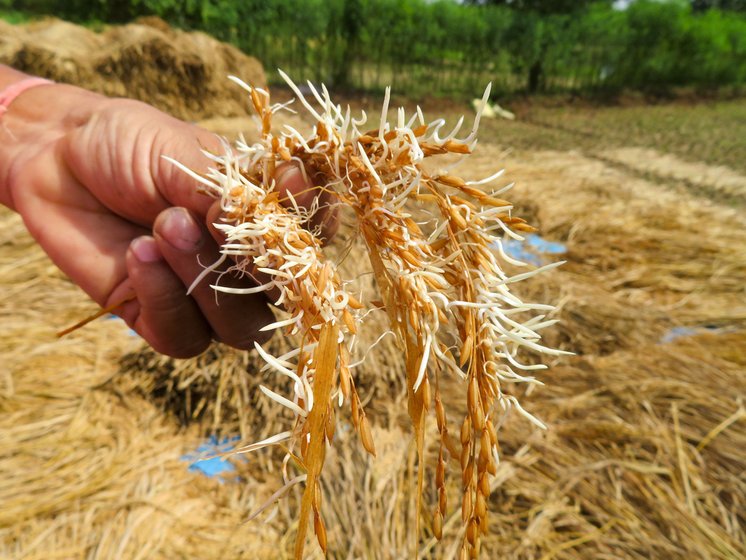 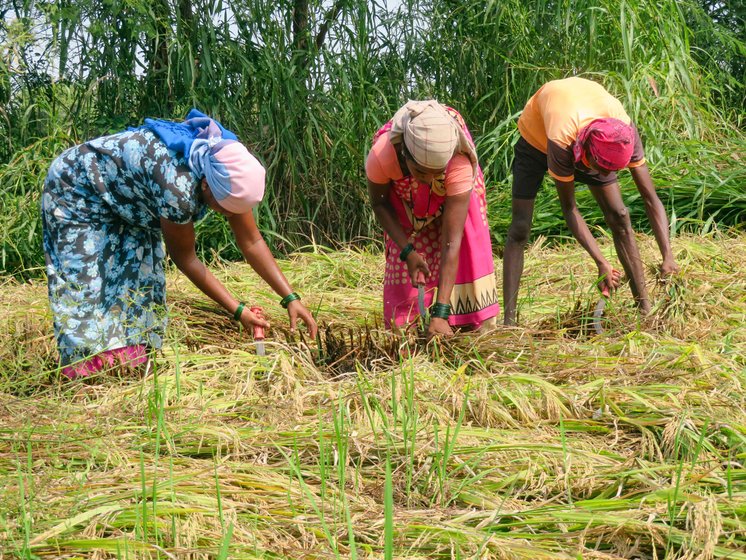 Across the fields of Palghar, the paddy got spoilt (left) with the unexpected October rain, and farmers tried hard to save some of it

Last year too, unseasonal rain in October had hit the quality of the yield. The family harvested around 12 quintals, of which they kept half for their own use and sold the rest. “Last year it was not that bad. The rice grains were not of good quality, but edible,” said Manoj. “In 2018, there was no rain after August. In 2019 it rained in October, and this year it’s the same too. I don’t really understand what is happening with the rain.”

Across Palghar district, many other farmers are also still grappling with the havoc cause by unusual rains in October. The Konkan region (which Palghar is part of) and drought-prone Marathwada, Madhya Maharashtra, and the sugar belt of Western Maharashtra witnessed excess rain this year between October 1 and October 21 (notes the IMD). This devastation even claimed 27 lives in these regions, said various media reports.

The Konkan region received 171.7 mm rain as against a normal of 73.6 mm during this period (Department of Agriculture, Maharashtra data). The showers damaged standing kharif crops of paddy, soybean, cotton, maize, jowar and more in many parts of Maharashtra.

Around 46 kilometres from Gates Budruk, in Khadkipada hamlet in Jawhar taluka , 44-year-old Damu Bhoye was also feeling quite hopeless. He showed me how bugs were eating away his urad crop, cultivated on three upland acres. In September, the plants were in a good condition. But the sudden rain in October sparked a pest attack.

“My farm is now filled with bugs, eating all the leaves and pods. October is crucial, we start plucking pods by mid-month. But the sudden rain brought pests, the roots decayed, and the pods too did not mature fully,” said Damu. “I spent around Rs. 10,000 on seeds and fertilisers. This is a complete loss.” 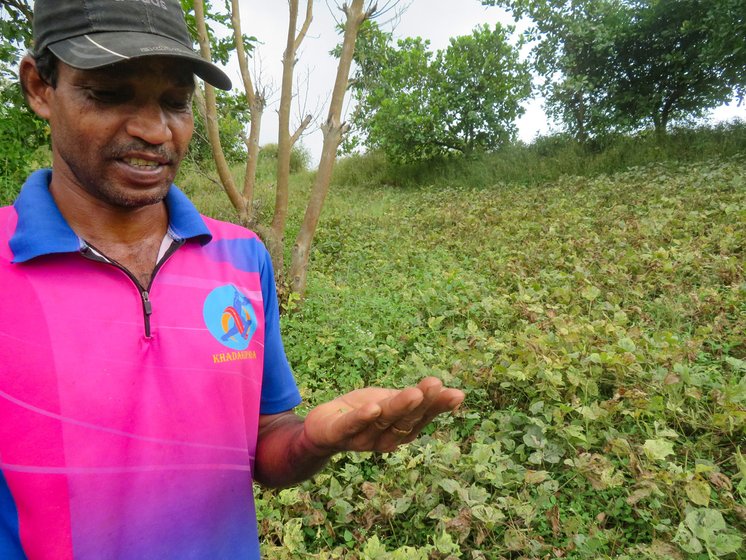 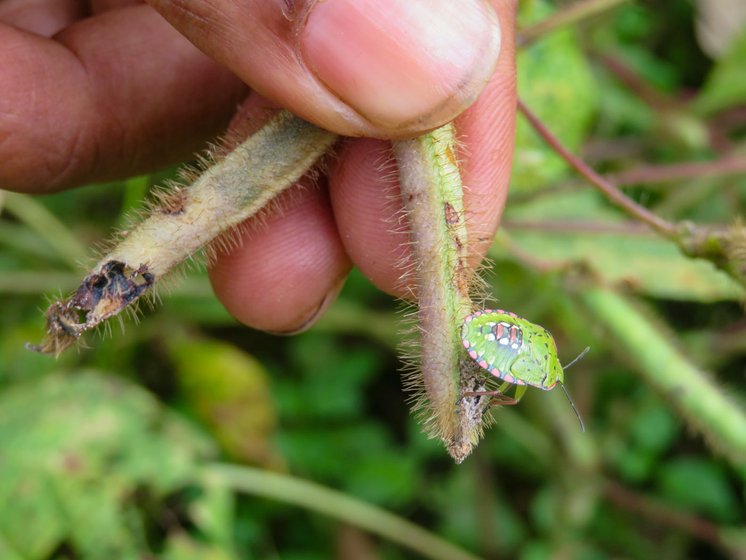 In Khadkipada hamlet, Damu Bhoye said, 'My farm is filled with bugs [due to the unseasonal rain], eating all the leaves and pods'

Other than farming, Damu and his wife Geeta, 40, also stitch women’s blouses for clients in nearby villages and save that money for cultivation expenses. “We earn some Rs. 1,000, sometimes Rs. 1,500 every month,” he said.

And every year, from the end of November till around May, they go to Mumbai or Thane to work at construction sites. “We earn Rs. 50,000 to 60,000 from construction work, but cannot save anything from our earnings,” Damu said.

Their elder son, 25-year-old Jagdish, works as a laboratory technician at a private hospital in Vikramgad taluka of Palghar. His salary of Rs. 15,000 a month, said Damu, is a “huge support, and we are now able to save from his salary.” Damu and Geeta’s daughter is in Class 8, and a younger son is in Class 5 in the zilla parishad school in the village.

In their hamlet of 25 families from the Katkari community – listed as a Particularly Vulnerable Tribal Group in Maharashtra – at the outskirts of Dehare village, all the families mainly cultivate paddy, ragi and urad dal on forest land ranging from one acre to three acres. “After persistent demands since 1995, we all got land titles [to the forest land plots] in our name by 2018,” Damu said.

Not far from their farm, on three lowland acres cultivated by Chandrakant Bhoye, 45, and his wife Shalu, 40, have also been hit by losses due to the October rain. Their paddy crop too was submerged on October 13-14. “It rained for 4-5 hours those days, with heavy winds,” Chandrakant said. 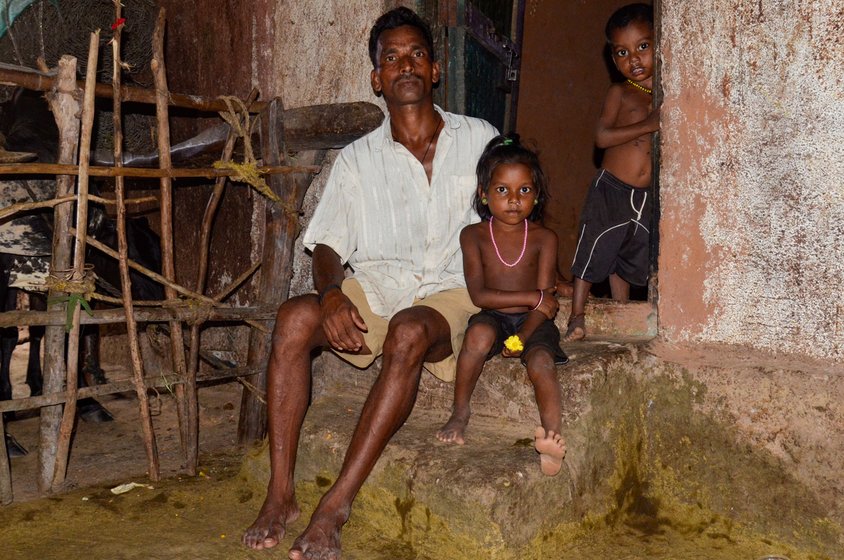 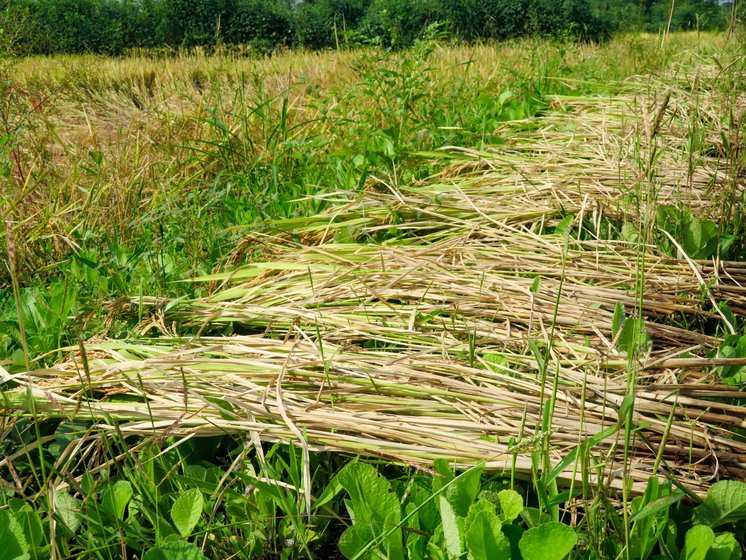 The family was counting on a good yield this time to be able to repay loan of Rs. 15,000 taken from a relative. “I had no money to buy seeds or fertiliser. So I borrowed. I never sell the harvested paddy, but I had thought of selling 7-8 quintals this time [to Mahamandal] to be able to repay the loan,” said 45-year-old Chandrakant.

He and Shalu harvest 10-12 quintals every year. They also work at a brick kiln in Dahanu, around 80 kilometres away, from November to May, and invest their earnings in farming. In 2019, they came back with Rs. 50,000 from the kilns. “The bandh [lockdown] started in March. So the brick kiln owner didn’t pay us, we walked back home,” Chandrakant said, sitting outside his two-room mud house with his four-year old daughter Rupali and three-year-old son Rupesh.

He is now increasingly worried about the loan. “We will work more this time at the brick kiln,” he said, determined. “ We got only five quintals of paddy husk this time. But I am sure will earn more than last year from the brick kiln,” he told me on the phone on November 8.

Chandrakant and Shalu are planning to leave by November 23 for a brick kiln in Dahanu along with Rupali and Rupesh, carrying hopes of a good earning season and leaving behind the loss of the unseasonal rain. 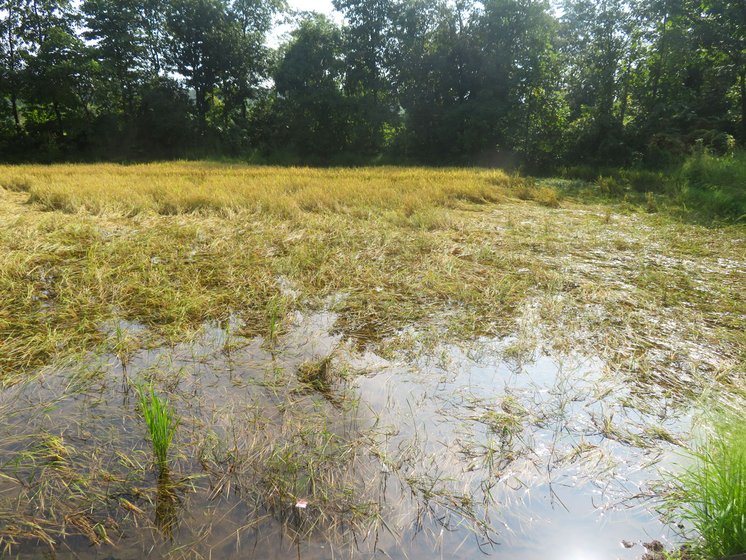 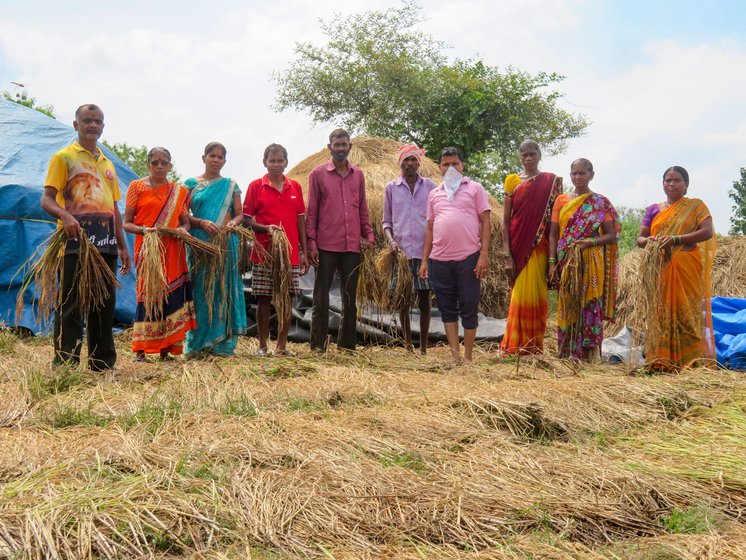 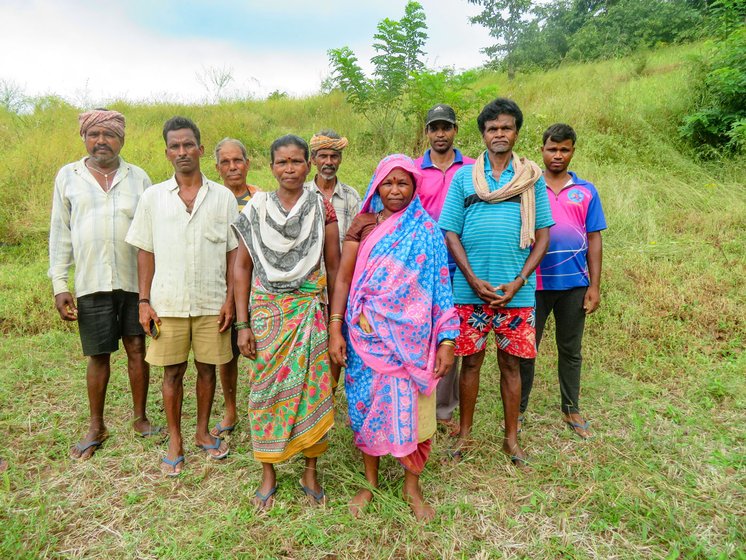 Unexpected rainfall in October hit all the farmers in Gates Budruk, a village of 1,134 people

“The loss is huge. As per preliminary estimation, there is a loss of crops over 10 lakh hectares,” Vijay Wadettiwar, the state’s Minister for Relief and Rehabilitation, told TV9 Marathi on October 21.

On October 22, officials in the Palghar district collectorate told me that “inspection is in process since October 16” and they cannot give any estimate of crop destruction or affected farmers immediately.

On October 23, the chief minister of Maharashtra, Uddhav Thackeray, announced a Rs 10,000 crore package for farmers affected by heavy rain and floods in the state.

On October 27, officials from the talathi’ s office in Vada taluka conducted an inspection in Gates Budruk – after farmers from the village visited the talathi ’s office to report their crop losses. “They checked all the muddy farms, took photos of the sprouted husk. And said they will inform us about the compensation,” Manoj had said.

After the inspection of all the affected farms in Palghar district is complete, and all losses estimated, it is expected that the farmers will get the compensation for their damaged crops.

But that’s not yet happened. And, Kamini, Manoj and the other farmers in Palghar are not too hopeful of receiving anything. “I didn’t get last year’s compensation; I don’t really expect anything,” says Kamini. “Officers from the talathi ’s office kept saying you will get money next month, next month, but we have not received any help.”