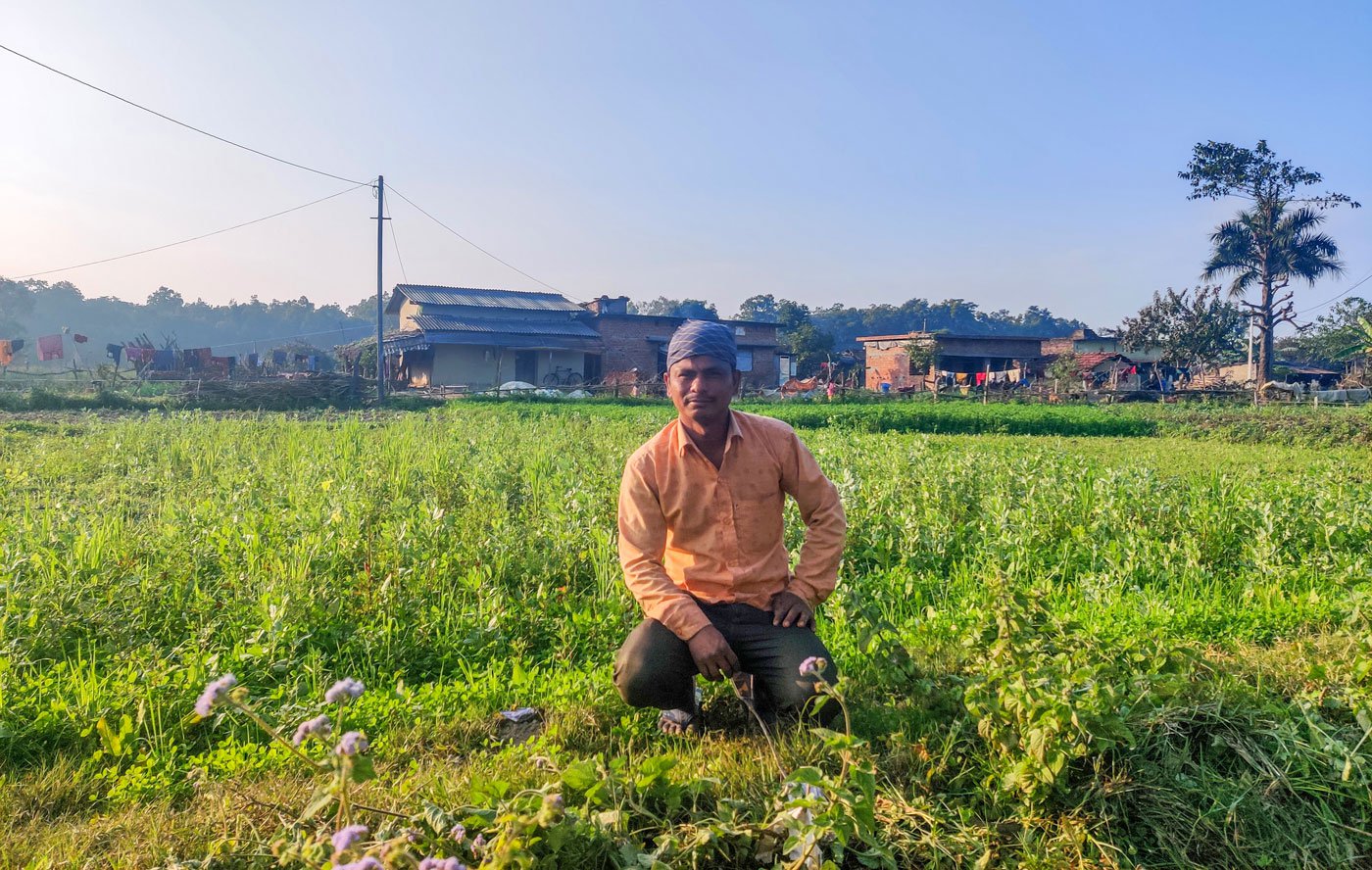 In Kheri: changing sides for health

The open border policy of India and Nepal has allowed their citizens to move freely between the two territories. In UP's Kheri district, it has helped people go across for cheaper and better healthcare

When his wife started having breathing difficulties in May 2021, Rajendra Prasad was forced to rush her to a private hospital in the town closest to his remote village in Uttar Pradesh. His first preference, though, was a hospital that was closer but across the national border – in Nepal.

“It is common for us to seek treatment on the other side of the border, Many of us in the village have done that over the years,” says Rajendra, 37, explaining the unusual preference. The hospital in Nepal is just 15 kilometres from Bankati, Rajendra’s village. Bankati falls in Lakhimpur Kheri (also known as Kheri), the largest of UP’s districts, located on the border with Nepal.

The open border policy between India and Nepal, in effect since 1950 when the Treaty of Peace and Friendship was signed, has allowed the citizens of India and Nepal to move freely between the two territories. It lets them engage in trade, acquire property, and take up employment. For Bankati’s residents, the open border has enabled access to cheaper and better healthcare in Nepal.

But Covid-19 changed all that.

When Geeta Devi, Rajendra’s 35-year-old wife, had to be admitted to a hospital, the second wave of the pandemic was at its peak in India. But they could not go to the hospital across the border because Nepal had sealed its 1,850-kilometre border – along five Indian states – from March 23, 2020, after the outbreak of Covid-19.

Rajendra’s family paid a heavy price for it. 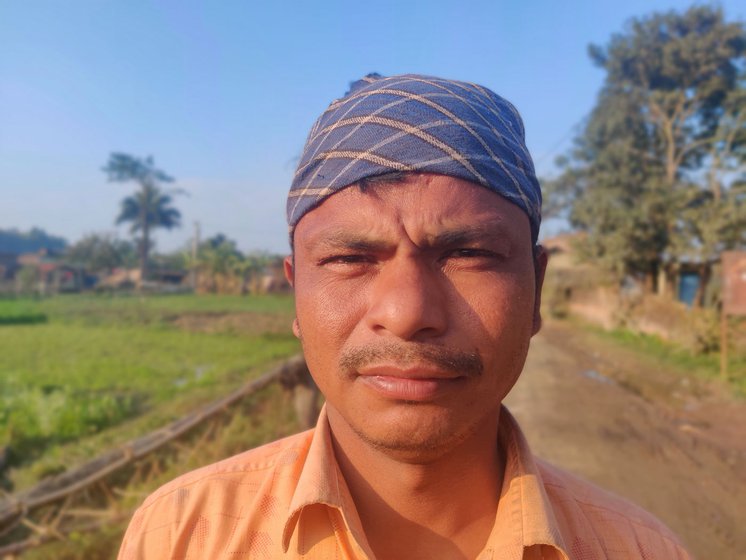 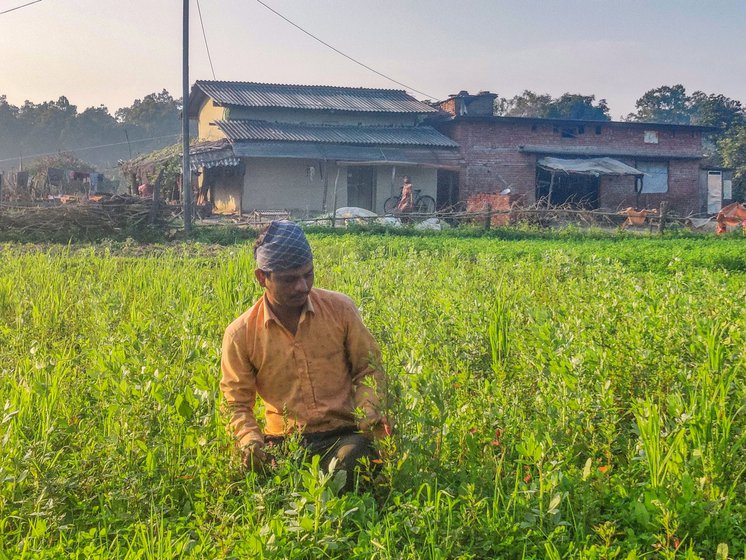 Rajendra Prasad in his farmland in Bankati, located on the border with Nepal. He wonders if his wife would have lived had the border not been sealed due to Covid-19 and they could have gone to the hospital there

Rajendra took Geeta to Palia town, about 25 kilometres from Bankati, and the headquarters of the block in which their village is located. “The road [to Palia] is terrible, so it takes longer to get there,” he says. “The public hospital in the town is not good, so we had to go to a private one.” Rajendra hired a vehicle for Rs. 2,000 to take Geeta to Palia because the primary health centre (PHC) in Bankati was not equipped to deal with a serious ailment.

Even though Geeta had Covid symptoms – a cough and cold and then the difficulty in breathing – she tested negative for the disease at the town hospital; but she was detected with pneumonia. “Her breathing difficulties continued,” says Rajendra. Then there was a shortage of oxygen in Palia. “I arranged some cylinders on my own, but it wasn’t enough. Six days after being admitted, she passed away.”

A small farmer with under an acre of land, Rajendra’s annual income is not steady, and not more than Rs. 1.5 lakhs. For Geeta’s treatment, he spent a total of about Rs. 50,000, including the oxygen cylinders he procured privately. “I borrowed money from the trader who buys my stock of rice. I will repay him with my harvest,” he says. “I don’t regret the loan, but I regret that she could not get proper treatment,” says the father of two. “I am now looking after my teenage children on my own.”

It will soon be a year since Geeta’s death. Rajendra still wonders if things would have been different if they could have gone to the hospital in Nepal. “Some people did try to sneak in through the [Mohana] river or [Dudhwa] forest when the border was closed,” he says. “But I didn’t want to take any risk. We didn’t have enough time. So I decided to look for a hospital in Palia instead of going to Nepal. I don’t know if it was the right decision.” 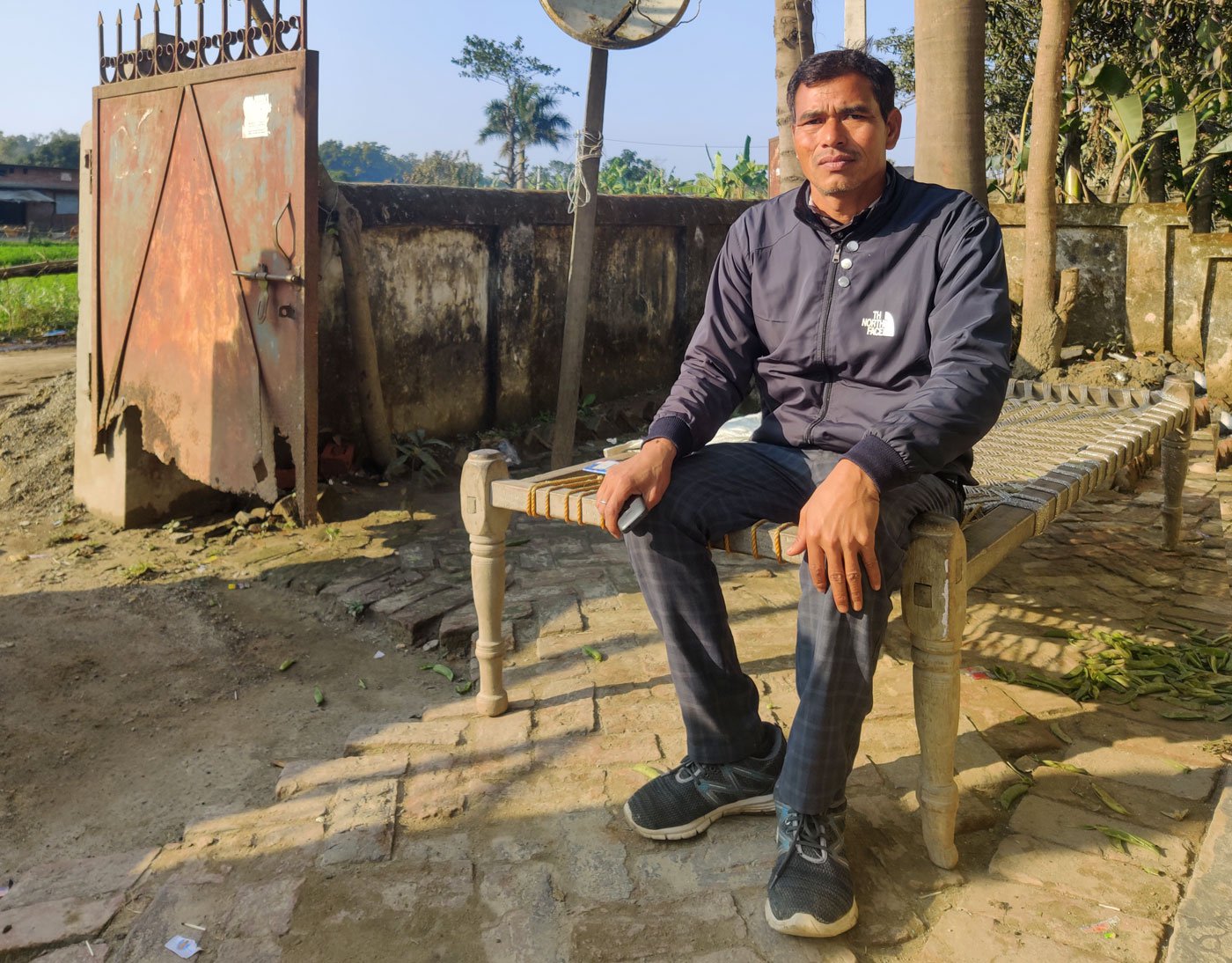 Jai Bahadur Rana, the pradhan of Bankati, is among the village's many residents who seek treatment at Seti Zonal Hospital in Nepal. "The doctors and facilities at Seti are far better," he says

Almost everyone in Bankati’s 214 households have received medical treatment at the Seti Zonal Hospital in Nepal’s Dhangadhi district. Jai Bahadur Rana, the 42-year-old pradhan of Bankati, is among them.

He says he visited the hospital about five times when he was infected with tuberculosis (TB) about 6-7 years ago. “The treatment lasted for about six months,” says Rana. “During that period, there was no checking along the border. I could get treated without a hassle.”

Rana explains some of the reasons for people from his village wanting to go to the Seti Zonal Hospital. “The road to Palia goes through the Dudhwa Reserve, It isn’t a safe route to take. There are several wild animals,” he says. “And even after we get to Palia, what are the options? We can’t afford private hospitals. The public hospital in Kheri has no facilities. As compared to that, the doctors and facilities at Seti are far better.”

He remembers his experience in Nepal fondly. “In the public hospitals here [India], the treatment and bed are free but the doctors always prescribe medicines that you have to buy from [the medical stores] outside. It costs a lot of money.” This is not the case in Nepal, he says. “There, they prescribe medicines from outside only if it isn’t available in the hospital. My treatment hardly cost me any money. I am fortunate I didn’t catch TB after March 2020. I would have had to find a hospital in Kheri or Lucknow [about 200 kilometres away]. Even after the border opened up, it isn’t the same.”

Nepal decided to allow overland movement of people from India in the last week of September 2021. However, a Covid-negative report obtained within 72 hours of departure, and a printed copy of a filled-up online international traveller form, are required to be submitted now.

The new system has forced Bankati’s residents to fall back on medical facilities in their own country. 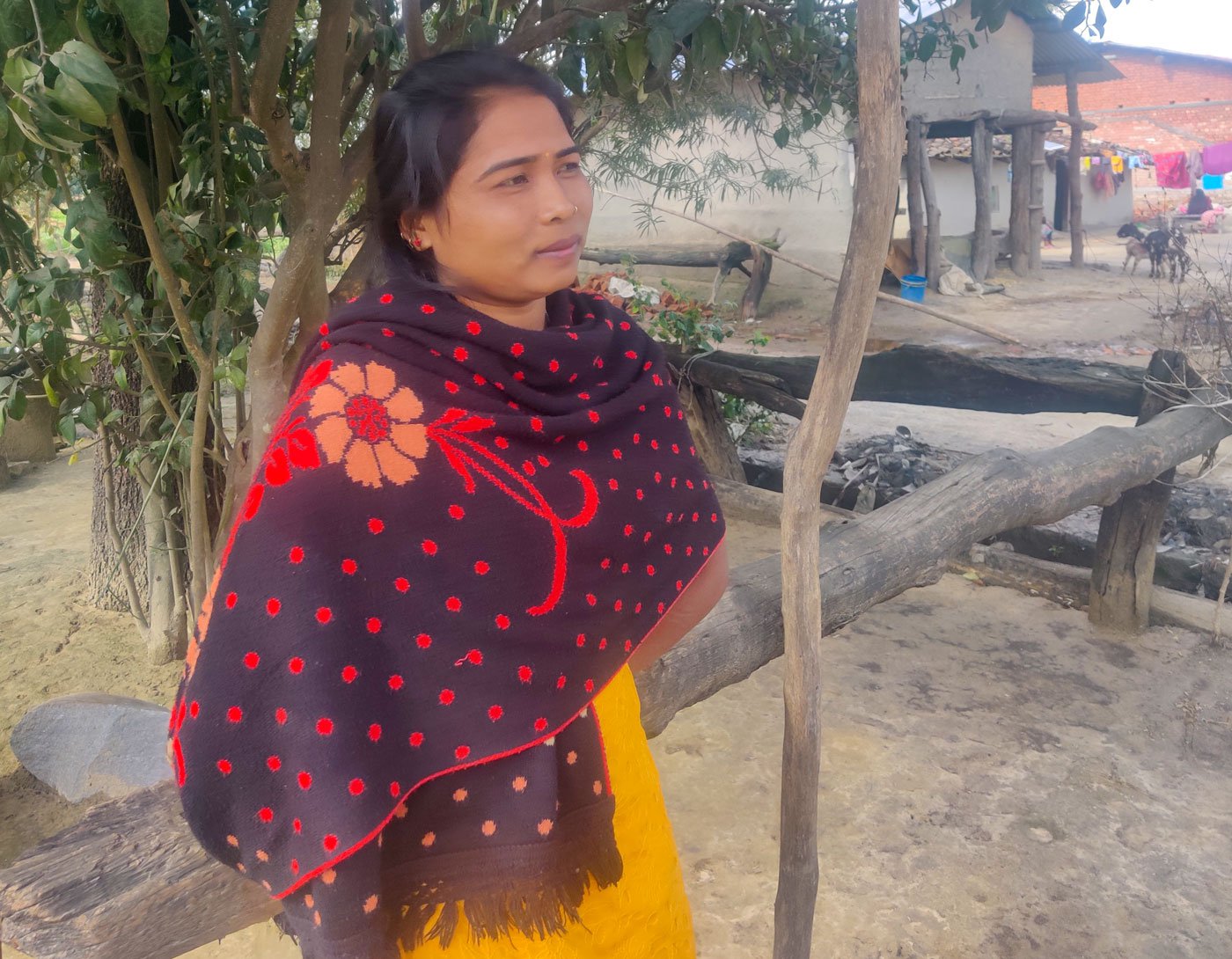 Mansarovar outside her house in Kajariya. In January, she walked through the forest with her infant son to reach Geta Eye Hospital across the border. "No hospital in our district is as good as Geta for eye care," she says

“One has to answer a lot of questions at the border now [at Gauriphanta],” says Rana. “They ask for your village name, your ID, your reason to visit and so on,” he says. “Even though they mostly let us through, answering the guards’ questions can be intimidating for a villager. So now most people go across the border [only] if they absolutely have to.”

One such unavoidable reason to go across is the Geta Eye Hospital in Nepal’s Kailali district.

In mid-January 2o22, Mansarovar, 23, walked through the forest from her village, Kajariya, in Kheri district, to reach the eye hospital located 20 kilometres away. She had carried her infant son with her to show him to the doctors there. “No hospital in our district, or even the state, is as good as Geta for eye care,” she says. “And I didn’t want to take any risk with my son.”

Her son, born in April 2021, had been struggling with a problem in his eyes – had been watering abnormally and exuding discharge. It continued until Mansarovar took him across. “Luckily, nobody stopped me at the border,” she says. “My son got better in two weeks. I went back to the hospital again when the eye discharge stopped. The doctor kept a hand on my son’s head and told me not to worry about it any longer. The whole treatment cost me Rs. 500.”

For people in Kheri’s border villages – where the majority belong to the Tharu community, a Scheduled Tribe in Uttar Pradesh – affordable treatment is as important as respectful treatment.

In Kajariya, about seven kilometres from Bankati, 20-year-old Shimali Rana, knows what it feels to be humiliated at a hospital. “You are helpless. You can’t say anything because the person humiliating you is also supposed to treat you,” she says, narrating her experience at a hospital in Palia. 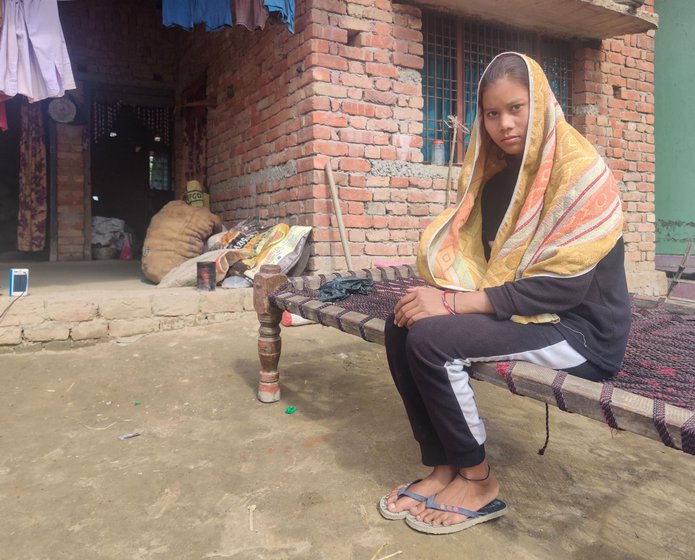 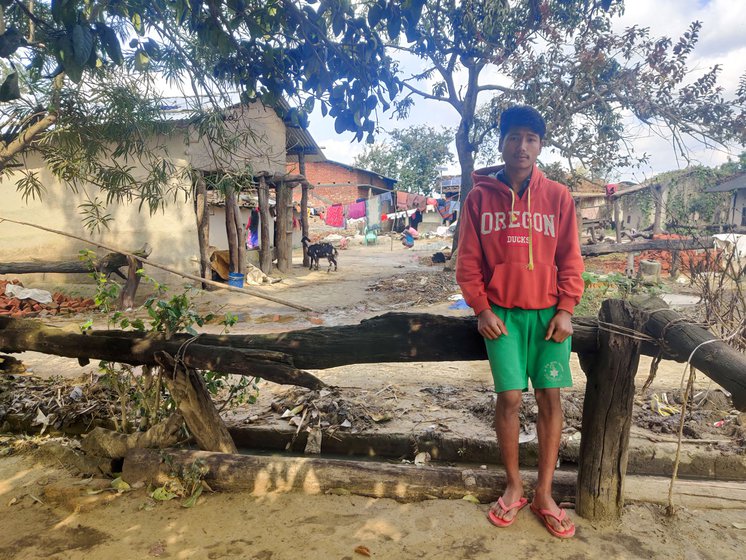 Shimali and Ramkumar (right) outside their home in Kajariya. They had no choice but to get their newborn son treated at a private hospital in Kheri's Palia town. "It is not my fault that you are poor," said a doctor there, after the hospital wanted them to pay more

Her son, whom she gave birth in November 2021, was born with a lung problem. “He couldn’t breathe [well] and the local PHC asked us to go to Palia because they didn’t know what to do about it,” she says. “We went to a private hospital and had a horrible experience.”

The doctors were reluctant to discharge their boy even after he had recovered, says her husband, 20-year-old Ramkumar. “They wanted to extract more money,” he says. “We are poor farmers with little land [less than an acre]. We told them we could not afford it anymore. The doctor there abused us and said, ‘It is not my fault that you are poor’. Before that, they had insulted us for not being able to pay money in advance.”

For Shimali and Ramkumar, the unpleasant experience lasted a week, until the family insisted on getting the discharge. By then, Ramkumar had borrowed Rs. 50,000 from his relatives to pay the medical bills. “Even when my boy was being discharged, the doctor said, ‘If something happens to him, it is not our responsibility’.”

Mansarovar’s experience in Nepal was exactly the opposite. She came out of Geta Eye Hospital relieved and reassured. “The doctors are respectful,” she says. “If you don’t understand Nepali, they will make an effort to engage with you in Hindi even if they are not fluent in it. They will answer all your questions. In India, they treat poor people with contempt. That is the biggest problem in this country.”