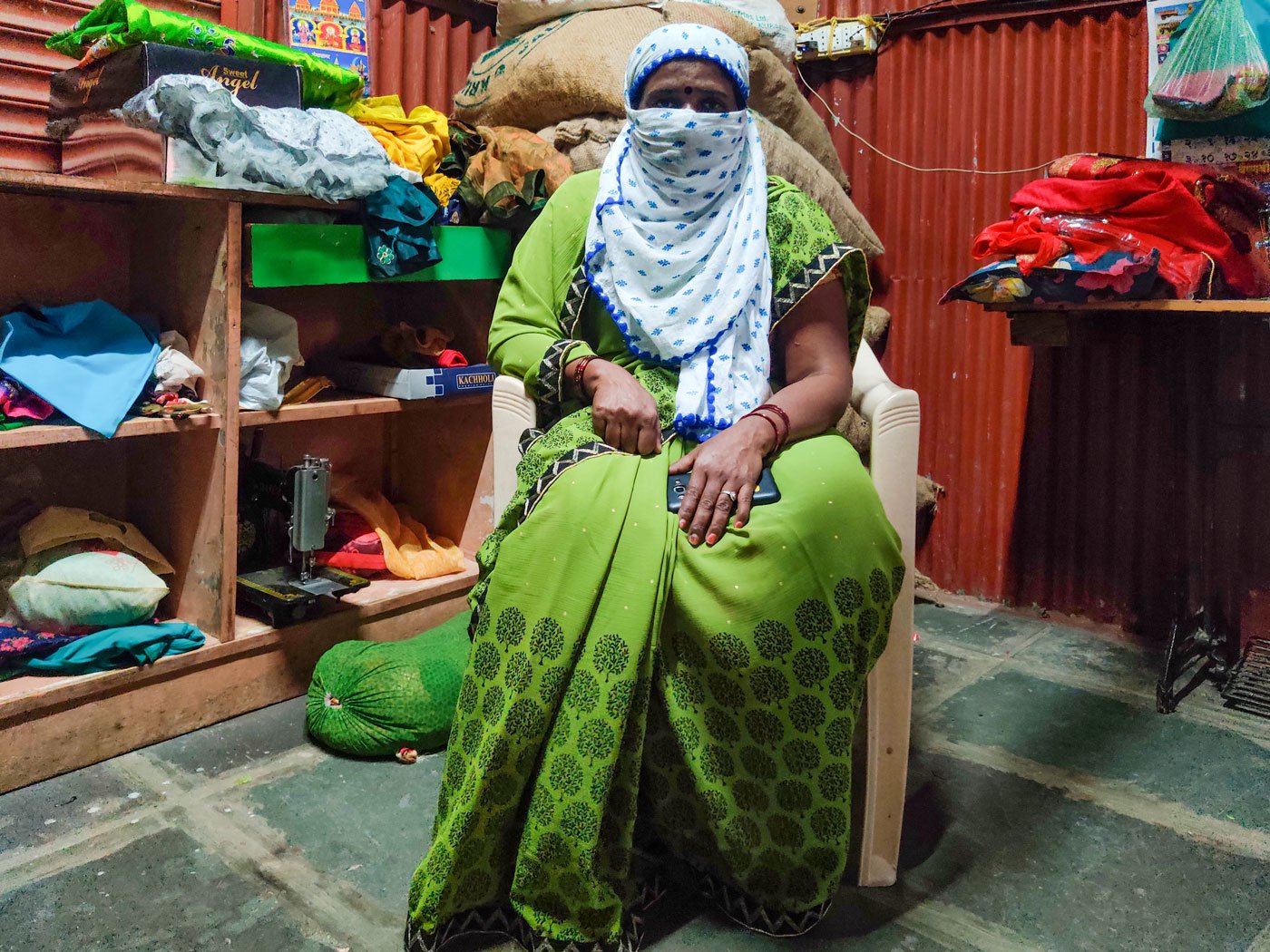 In Beed, waiting for a pandemic paradigm shift

Though praised as ‘fighters and heroes’ for their role in managing Covid-19, Maharashtra’s frontline workers feel ignored and insecure – they have been fighting for job security and financial stability

Shahbai Gharat was chasing the coronavirus for over a year – until it caught up with her one day. An accredited social health activist, or ASHA, Shahbai had been going from door to door tracking Covid-19 in Sultanpur, her village in Maharashtra’s Beed district. But in the last week of May, her worst fear came true when she tested positive for the infection.

Shahbai, 38, was aware of the risks of her job during the pandemic, but she had not foreseen the ramifications. Soon after she tested positive, her 65-year-old mother was infected too. Then her four nephews got it. The whole family was in anguish because of the disease.

It took a few weeks for Shahbai to recover. “My nephews got better too, but my mother had to be admitted to a hospital,” says Shahbai, adding that she required oxygen support for a week. “My mother's treatment cost 2.5 lakh rupees. I sold my 2.5-acre farmland and some jewellery to pay for it.”

Her work as an ASHA was never easy but the pandemic has made it worse. “I have faced threats and abuses. People would hide their symptoms initially,” says Shahbai. “I have faced a lot of negative reactions in the village for trying to do my job.”

There are more than 70,000 accredited ASHAs in Maharashtra. They have been the first line of defence against the virus since its outbreak in March 2020. In addition to performing home visits, they also tackle vaccine hesitancy in the villages. 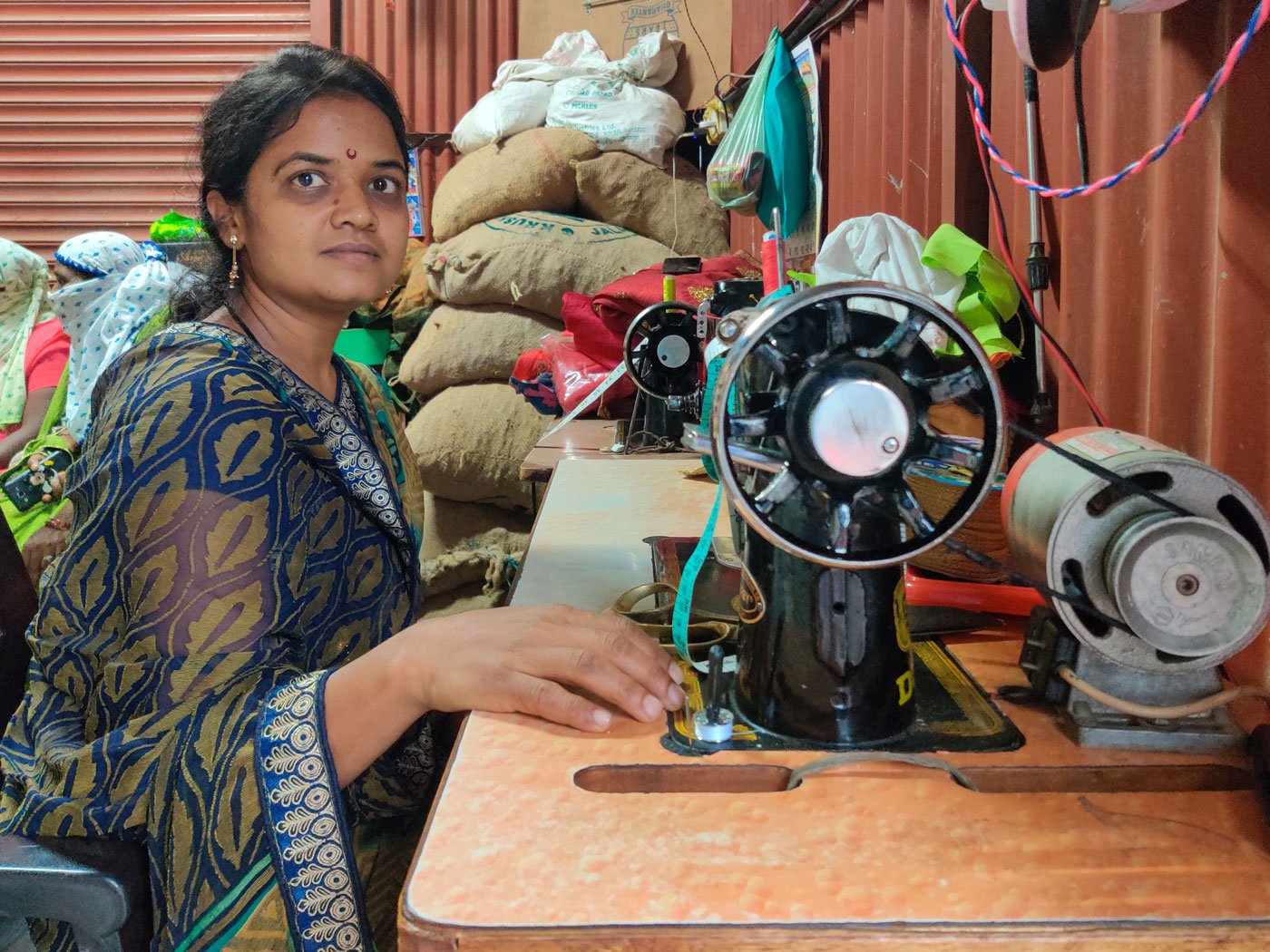 Shahbai Gharat at her sewing machine at home in Sultanpur village. Her work as an ASHA put her family at risk in May

All this for an honorarium of about Rs. 3,300 per month, as well as incentives under the various central and state health schemes – Shahbai earns Rs. 300-350 in incentives in a month. But despite hard work and many hours of service, ASHAs have had little support during the pandemic. “Let alone help in the crisis, we don’t even receive salaries [honorarium] on time. The last time we were paid was in April,” says Shahbai.

The only protection they are given is a mask, and that too not enough. Shahbai says, since March 2020 she has received only 22 disposable masks and five N95s. “Do you think the returns are fair in our job when you consider the risk involved?”

It is a question almost every ASHA worker asks.

For many months, Shobha Ganage bathed in the toilet of her home instead of the bathroom to protect her family from Covid-19. “My daughter is eight years old. For months, I could not hug her when she cried. She would want to sleep next to me but I couldn’t allow her,” says Shobha, a 33-year-old ASHA worker in Chausala village in Beed, two kilometres from Sultanpur. 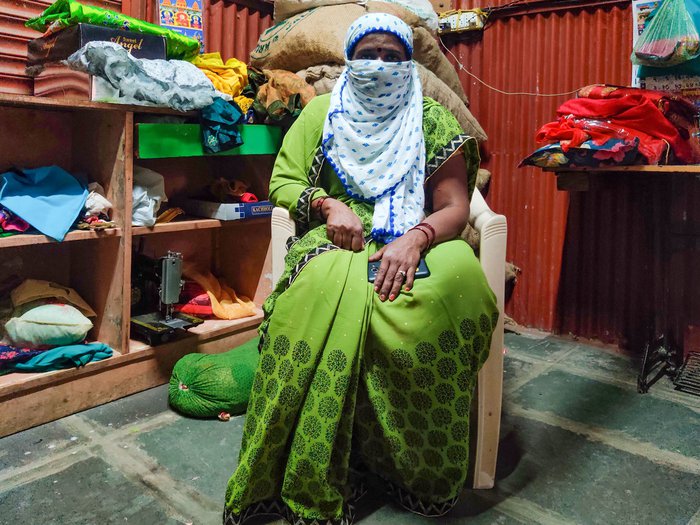 Shobha Ganage expects more than just words from the government

In mid-June, ASHA workers’ unions in Maharashtra went on an indefinite strike that lasted a week. The state government responded by agreeing to increase their honorarium by Rs. 1,500 per month – Rs. 1,000 in their pay and Rs. 500 as Covid allowance

Their sacrifices have been ignored, Shobha believes. “The chief minister praises us but doesn’t give us any real support.” In early July, Chief Minister Uddhav Thackeray was reported to have applauded the ASHAs, and called them “fighters and heroes.” He said that they would play an important role in combating the third Covid wave if and when it arrived. But Shobha expects more than words. “His praise won’t help us run our house.”

For Shahbai and Shobha, financial stability has been the driving force behind taking up the job – but for different reasons.

Shahbai, who belongs to the Maratha community, is single and living with her mother, two brothers and their families. “I got divorced 13 years ago,” she says. “It is not easy in a village to be accepted after that. People talk, and I feel like I have caused a lot of distress to my family.” Shahbai seeks financial independence to preserve her self-respect.

Now she feels guilty for bringing Covid home to the rest of the family. “I can’t forgive myself,” says Shahbai. “I want to make it up to them, but I don't know how. I don’t want them to blame me.” Also, her work attracts unwarranted remarks in the village, particularly from men. “They speculate and draw inferences when I speak to someone,” she says. “It is my job to speak to people. What should I do?” 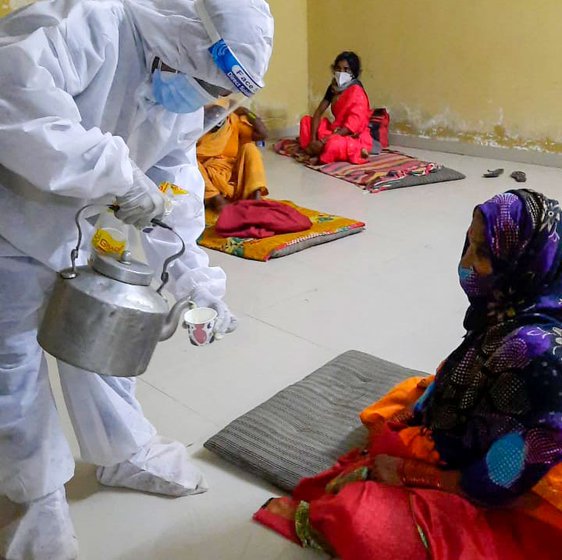 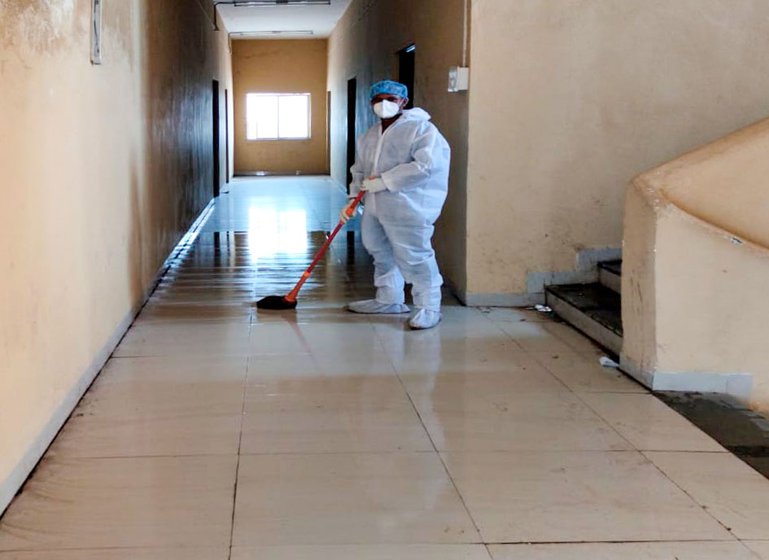 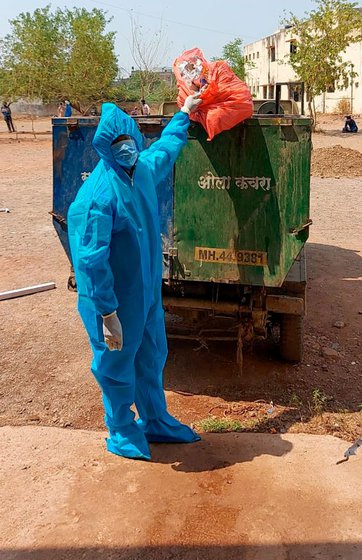 Crude remarks from men while on the job don’t affect her, says Shobha. “I know how to put them in their place.” Her troubles are different – her income ensures basic sustenance of her family. “We don’t own farmland,” says Shobha, who belongs to a Dalit community. “My husband works as an agricultural labourer, earning 300 rupees a day. He used to get work 3-4 times a week. But it reduced after Covid.”

A month after Covid-19 broke out, Shobha’s family took home foodgrains and pulses that were about to rot. “They were meant for school children [for midday meals], but the school was shut and the food had expired,” she explains. Rather than letting it all go to waste, teachers at the village primary school distributed the foodstuff among the needy. “We cooked it for us, and my daughter also ate it.”

Yet both Shahbai and Shobha know, for an ASHA – the acronym forms a word meaning ‘hope’ in some languages – there is no hope of attaining financial strength.

For a long time, ASHAs have been demanding better remuneration and permanent worker status. In mid-June, ASHA workers’ unions in Maharashtra went on an indefinite strike that lasted a week. The state government responded by agreeing to increase their honorarium by Rs. 1,500 per month – Rs. 1,000 in their pay and Rs. 500 as Covid allowance – from July 1. Maharashtra’s health minister, Rajesh Tope, also announced that each ASHA would be given a smartphone to help her file reports online.

But the assurances are yet to be implemented says Shubha Shamim, state secretary of Centre of Indian Trade Unions (or CITU). “There is little clarity on when ASHAs will receive the intended benefits,” she says.  Payment of honorariums is pending since May in the state, and Shamim says, the Covid allowance that was promised last year hadn’t come through so far. 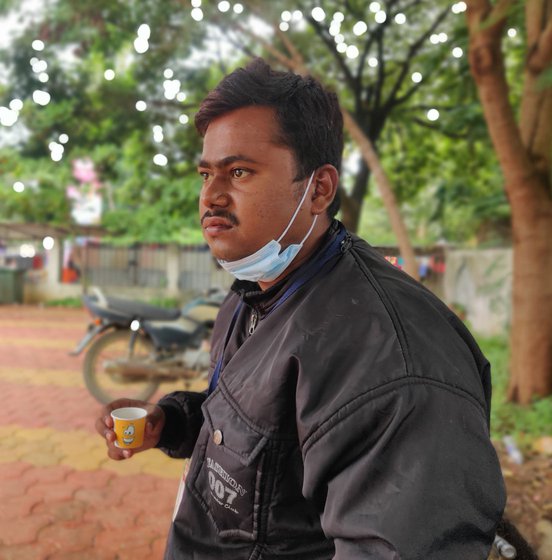 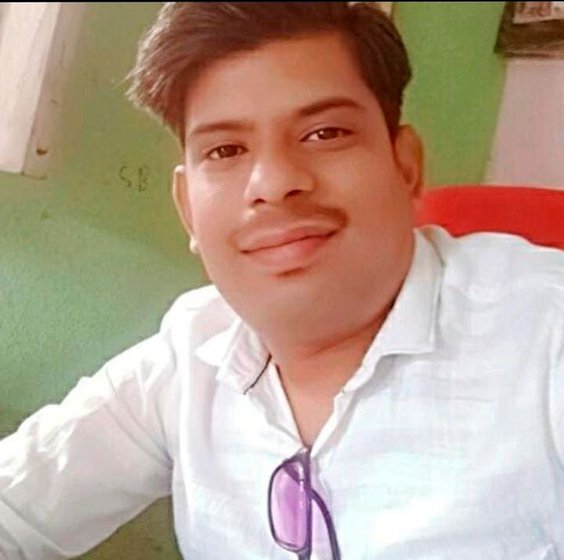 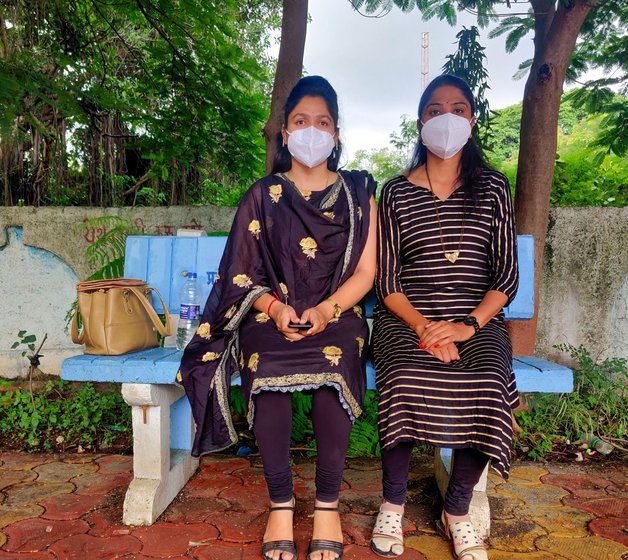 Left and centre: Lahu Kharge and Prashant Sadare. Right: Ankita Patil (on the left) with a colleague before joining the workers' protest in Beed

When ASHA workers were on strike in the state, about 250 contractual health workers took part in a protest in Beed, asking for regularisation of employment and better pay.

Mainly hired as nursing staff and ward assistants, the contractual workers were recruited on a temporary basis during the pandemic to handle the patient load at government facilities. Many of them were left unemployed after their contracts ended or when the volume of patients went down. “This policy is not different from ‘use-and-throw,’” says 29-year-old Prashant Sadare. He had worked as a ward assistant at the Dedicated Covid Care Centre in Wadwani taluka – 30 kilometres from Beed city. “I was hired in May this year, and was asked to leave two months later.”

Prashant’s parents work as agricultural labourers, struggling to earn a living. When he landed the job that was paying him Rs. 400 a day, Prashant had hoped to make his parents a little comfortable. “I risked my life, and did everything I was asked to do when the hospital were overflowing,” he says. “From dusting the Covid wards to feeding Covid-positive patients, I have done everything. What about our mental stress? Does anyone think of that?” He works as a part-time teacher in a private school now, earning Rs. 5,000 a month.

Lahu Kharge, 24, a ward assistant at the same Covid centre in Wadwani, applied for the job after seeing an advertisement. The candidates had to have completed Class 10 to be selected. Lahu left his job as a pigmy agent, collecting small deposits for a local bank, when he was selected. “We get a three month contract, which is renewed after a gap of one day when it ends,” says Kharge, who still has his job. “Our labour laws require that if someone is continuously employed for a year, they have to be made permanent. This is why these contracts are renewed every few months, after giving a gap of a day." 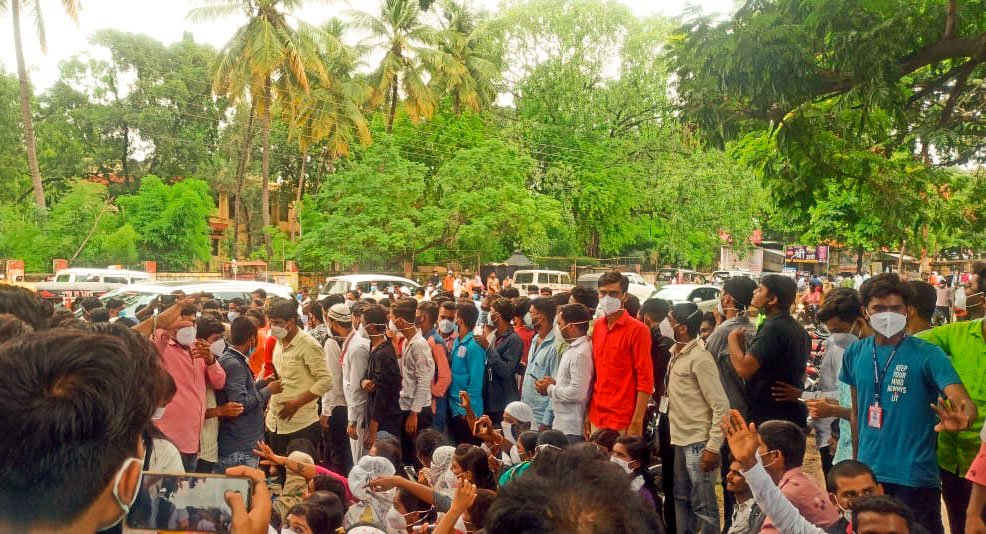 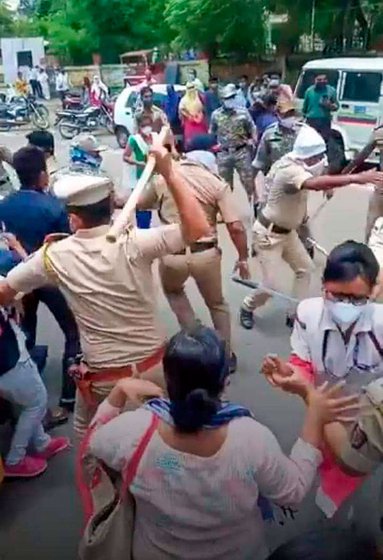 Left: Contractual health workers in Beed waiting to speak to the ministers on June 18. Right: The police charging with lathis

The contractual health workers protesting in Beed highlighted the insensitive hiring policy and asked for the jobs to be regularised. They had hoped to catch the attention of the Deputy Chief Minister Ajit Pawar, Guardian Minister Dhananjay Mundhe and Health Minister Rajesh Tope – who were all visiting the district on June 18 for a Covid-19 review meeting.

“But they ignored us,” says Ankita Patil, 29, who attended the protest that day. “We wanted five minutes of their time. We had written our demands on a sheet of paper and when we were told to present those demands at the Collector’s office, a staff snatched member took away the paper.” One of the ministers asked her to leave, the others “didn’t even look at us,” she adds.

Angered by the rude treatment, some protestors tried to stop the ministers’ vehicles. The police resorted to a lathi charge to disperse them. “Is this the way to behave with health workers?” asks Ankita. “We devoted months of our lives to Covid patients without a day’s break, risked our lives and that of our families, and they don’t even have five minutes to talk to us? We want to be treated with respect.”

Ankita has been working as a nurse at the Covid centre in Wadwani, earning Rs. 20,000 a month. “I still have my job, but I could be jobless tomorrow,” she says. “There is already a lot of mental fatigue and emotional stress. We need job stability. We have seen our friends getting sacked after the second [Covid] wave reduced. It takes a toll on us too.”

Paradoxically, the only chance that the contractual health workers have of being hired back is if a third Covid wave strikes. But no one can hope for that.