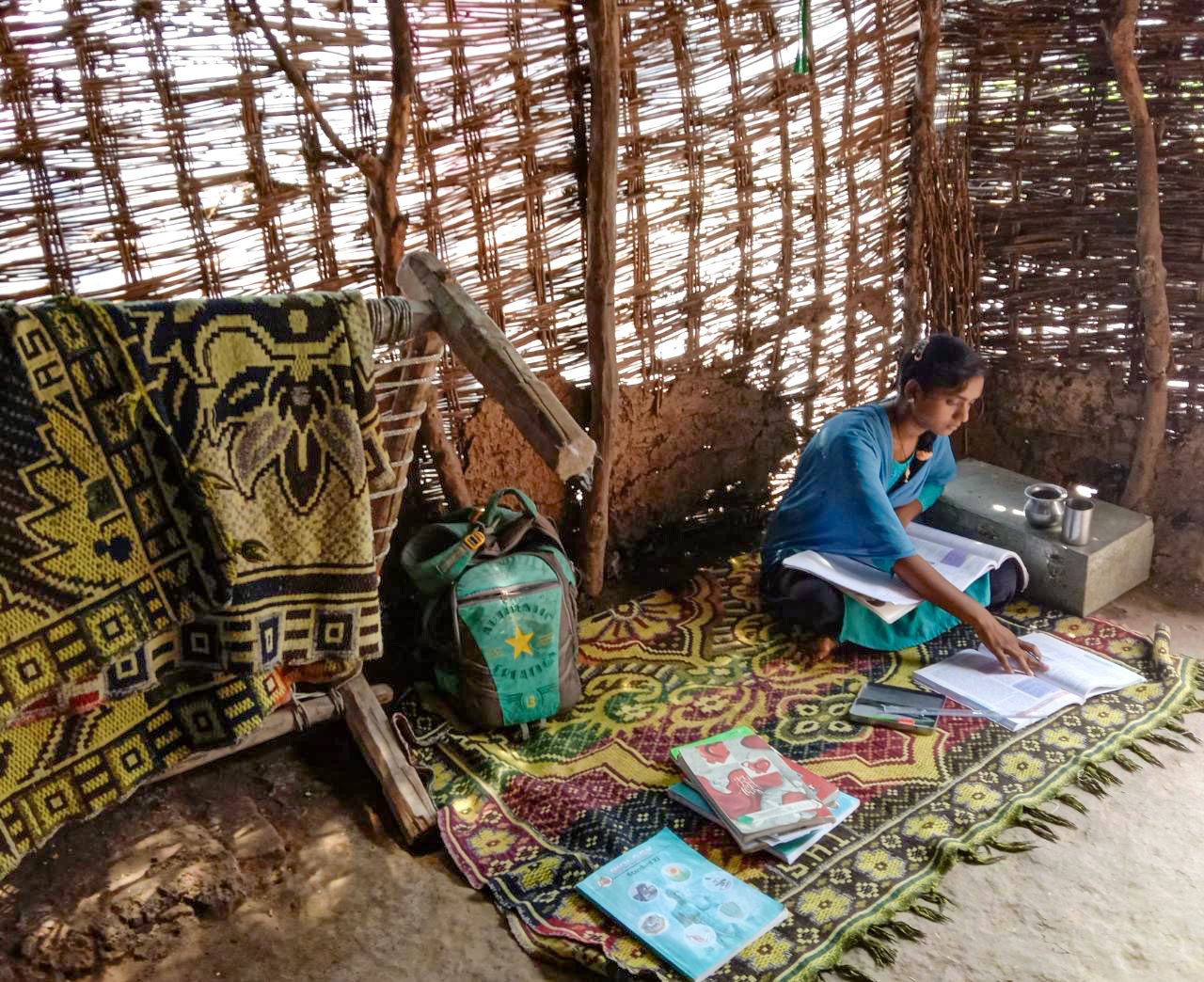 ‘I will become what I want to become’

In the Nathjogi nomadic community, no girl had ever passed Class 10. With fierce determination, Jamuna Solanke, from a hamlet in Maharashtra's Buldana district, has broken that barrier. This is her story

On the day my SSC [secondary school certificate] results were to come, my condition was like that of a cricket ball after it is hit. You know how everyone watches just that ball? Will it be a four [runs] or a six? Everyone would be watching. What if I failed? My father would have got me married immediately.

When the results were announced, I was relieved to find that I had scored 79.06 per cent and missed the third highest rank in my school by one point. I was thrilled with my achievement: in our Nathjogi nomadic community, no girl has ever passed Class 10.

I live in Nav Kh [Jalgaon Jamod tehsil , Buldana district], a small village with only people from my community. Most people here travel to Pune, Mumbai and Nagpur to work as beggars. The rest, like my parents, work as daily wage earners around our village.

My parents – Bhaulal Sahebrao Solanke, 45, and Draupada Solanke, 36 – work on others’ fields of wheat, jowar, corn, soybean and cotton. For a day’s work of around eight hours they earn 200 rupees each. They rarely work for long hours and not more than 10-12 days in a month, as there are many people looking for jobs and not enough work.

My father attended school till Class 5 and then dropped out to start working. I have two older sisters – Rukma, 24, never went to school and Nina, 22, studied till Class 5. Both my sisters, who are married now, have been working as daily wage labourers since they left school. My older brother Devlal, 20, is also a wage labourer. He dropped out of school in Class 9. When I turned 10, my father said, “You can start work now; you don’t need to study anymore.” He is not the only one. I pass an elderly lady every day on the way to school. She also scolded me: “Your sisters did not go to school, why do you need to? Do you think you will get a job if you study?’’ 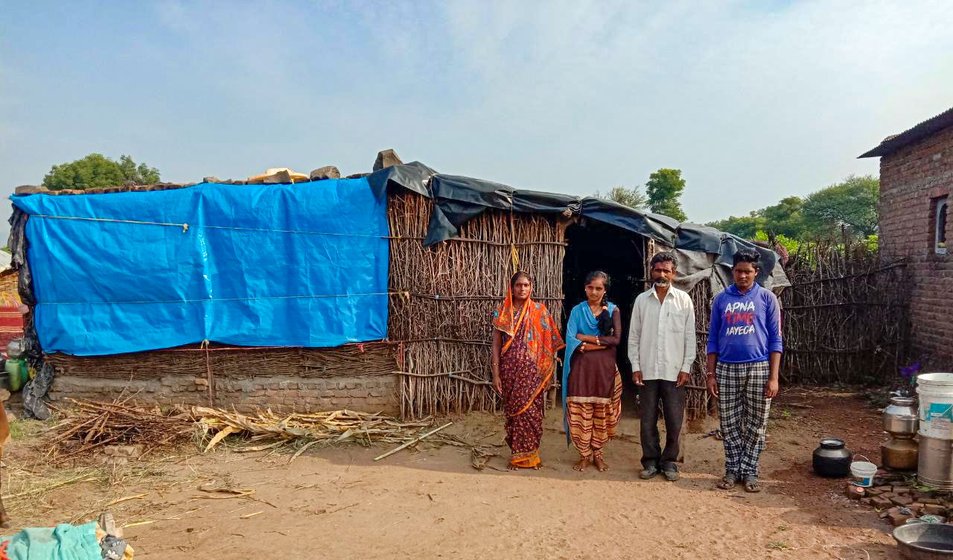 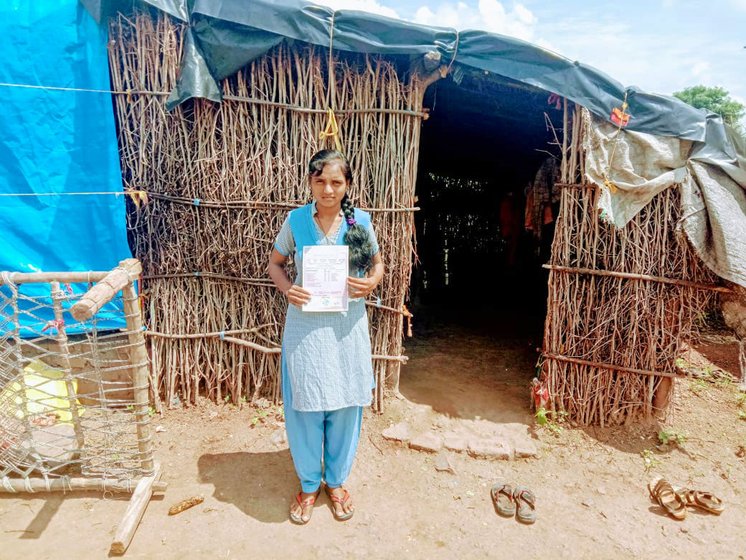 Jamuna with her family at their home in Nav Kh, a Nathjogi village: 'I was thrilled with my achievement: in our community, no girl has ever passed Class 10'

Even my uncle would often tell my parents that they should get me married, and my father would join in. I would tell my mother, “Tell baba (father) not to discuss marriage with me or anyone else. I want to study.” When she would try to talk to him they would get into a fight.

Later, when I passed Class 10 and a journalist came to interview me, my father was crying. He told the man, “I’m glad my daughter didn’t listen to me and went ahead with her education.”

I started school when I was seven years old. Two teachers from the school in neighbouring Palshi Supo had come to my village to take the names of all the school-going girls and someone gave my name, and so I joined Class 1 in the government primary school there.

A year later, a primary school started in my village and I shifted to it. In Class 5, I moved to the Mahatma Phule Nagar Parishad Vidyalaya in Jalgaon Jamod, the tehsil headquarters 14 kilometres away. I walked two kilometres, then took a shared auto to the town bus stand, and then walked another kilometre. The auto ride takes almost half an hour and costs 30 rupees one way. Six girls from my village went to the same school and we always travelled together.

One day, during the monsoon, the water level in the stream near our village had risen. We have to cross it to reach the main road. We usually manage to cross with only our lower legs getting wet, lifting our pyjamas and holding our chappals in our hands.

However, that day, the water must have been up to our waist. I asked a man from our village who was standing on the banks, “ Kaka , help us cross the river.” He shouted, “Just go back home, all of you! Why do you want to go to school? There are floods and you want to study? Girls should sit at home, why do you need to study?” We missed school that day. The next day, in class, our teacher, who believed we were all lying, made us stand outside the classroom as punishment. 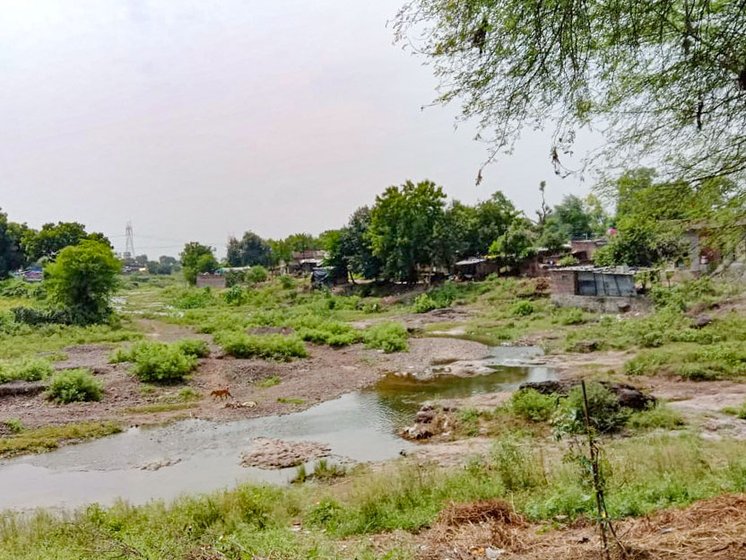 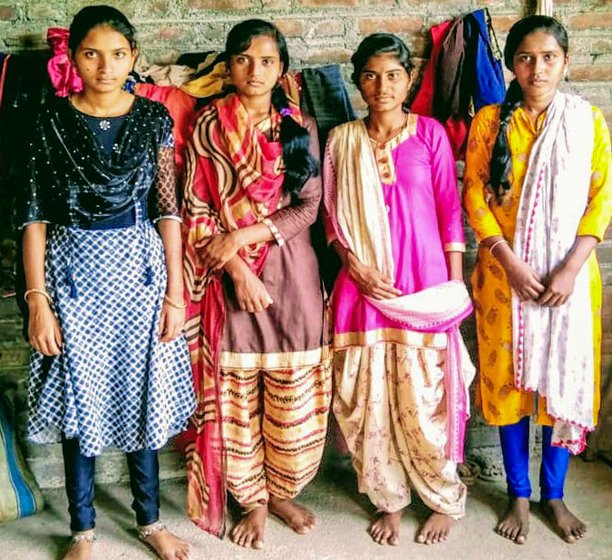 Left: Jamuna has to travel long distances to go to school, the situation worsens during the monsoon season . Right: Archana Solanke, Jamuna Solanke, Anjali Shinde and Mamta Solanke are the first batch from the Nathjogi community to pass Class 10

When it happened again, I asked my my mother to call and speak to him. Then he believed us. Later the teacher visited our village and saw what we had described.

I decided to submit an application to the state transport office at Jalgaon Jamod bus stand, requesting them to send the bus by 9 a.m. It was signed by all 16 girls who use the bus, including two girls who live in the village of Islampur, four kilometres away. The Manav Vikas bus is meant only for girls and the ride is free.

The officer agreed and promised us that the bus would be there at 9 a.m. the next day. It really did arrive and I was so happy! But it only lasted a day. When the bus did not come the next day, I went back to the officer and he told me, “The bus comes from another village and people there do not want the time changed. I can’t send a bus which only suits you.” He suggested we change our class timings, but how is that possible?

While travelling by a bus, there are other problems too. Once my friends and I boarded a state transport bus and a boy pulled my friend’s dupatta and shouted, “You girls from Mohidipur, get out.” Other boys joined him and there was a big fight. Mohidipur is where our Nathjogi community lives. Those boys did not want us Nathjogi girls on that bus. I got angry and once the bus reached Jalgaon Jamod, I took him to the state transport office. The conductor had intervened and told those boys that the bus is for everybody, but such things keep happening, so we prefer autos.

When I was 15, my father was trying to transfer the land on which our house stands, to his name. It is in my paternal grandfather’s name, and he had gifted it to my father. But the man from our village who could do it was asking for 5,000 rupees to do it. My father does not have that kind of money. We pleaded with the man many times, but he wouldn’t do it. As a result, we cannot avail of state funds to make it a pucca house. 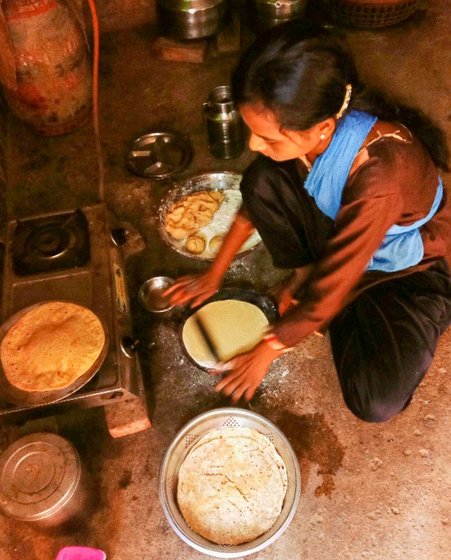 Left: Jamuna would cook and join her parents to work in the fields. Right: They cannot avail state funds to build a pucca house

Why should we pay to get our home in our name? No one should have to face such problems. I want to study and become a big officer one day. Then poor people like us will not have to give bribes to get things done. I will also explain what their rights are and make them not fear powerful people.

In government schools, till Class 8 books are provided free by the school and there is no uniform. But for Class 9 onwards, one must buy textbooks and notebooks, costing about 1,000 rupees, and the school uniform costs 550 rupees. Private tuition for one term costs another 3,000 rupees. I took tuition for only one term as I couldn’t afford it the second term. I requested my school teacher to help me out instead. So to fund these expenses, the summer before I was to go into Class 9, I started working in the fields with my parents. I used to get up at 4 a.m. and study for an hour. My parents and brother would leave for work around that time. After studying for an hour, I would cook bhakri and bhaji and carry it to them in the fields.

I would join them from 7 a.m. to 9 a.m and was paid 25 rupees an hour. At 9:30 a.m., I would come back home and get ready for school. After returning from school, I would head out again for wage work. I worked during the holidays too; the money helped pay for one uniform set. 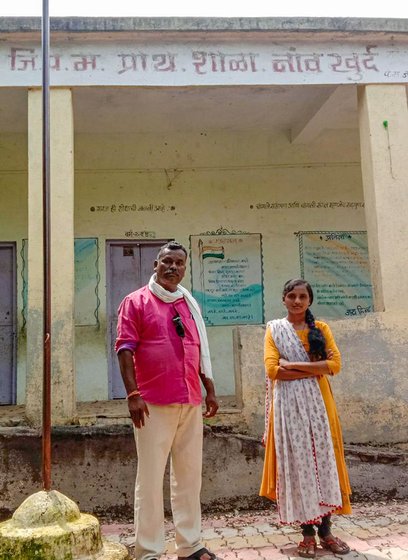 Last year [2019], I won a trophy in the block level essay writing competition organised by the Jal Shakti Abhiyan [Ministry of Water Resources]. I also bagged the second prize for my project on organic manure at the district level science exhibition in Buldana. I won the second spot in a running race in my school. I like to win. Girls from our Nathjogi community never get a chance to win.

In August, I got admission in The New Era High School in Jalgaon Jamod town for Class 11 and 12. It is a private school and the annual fees are 5,000 rupees. I have chosen the science stream - mathematics, physics, chemistry, biology – and I added history because I was told that history would  help me prepare for the civil services entrance exams. My dream is to get into the Indian Administrative Service.

For graduation I will have to move to Pune or Buldana town, where there are universities. People say I should become a bus conductor or an anganwadi worker because I will get a job quickly. But I will become what I want to become.

I want to change my community’s dependence on begging and their insistence on early marriage for girls. Begging is not the only occupation to feed oneself, education can also feed you.

Due to the lockdown, people have come back to the village and everyone's looking for wage work. My family is at home and we are not getting any work now. My father has borrowed money from an elder in the village for my school admission. Paying back is going to be very difficult. We are willing to do any work, but we will never beg for alms.

Prashant Khunte , an independent Marathi journalist based in Pune, helped with this story.

Other stories by Jamuna Solanke