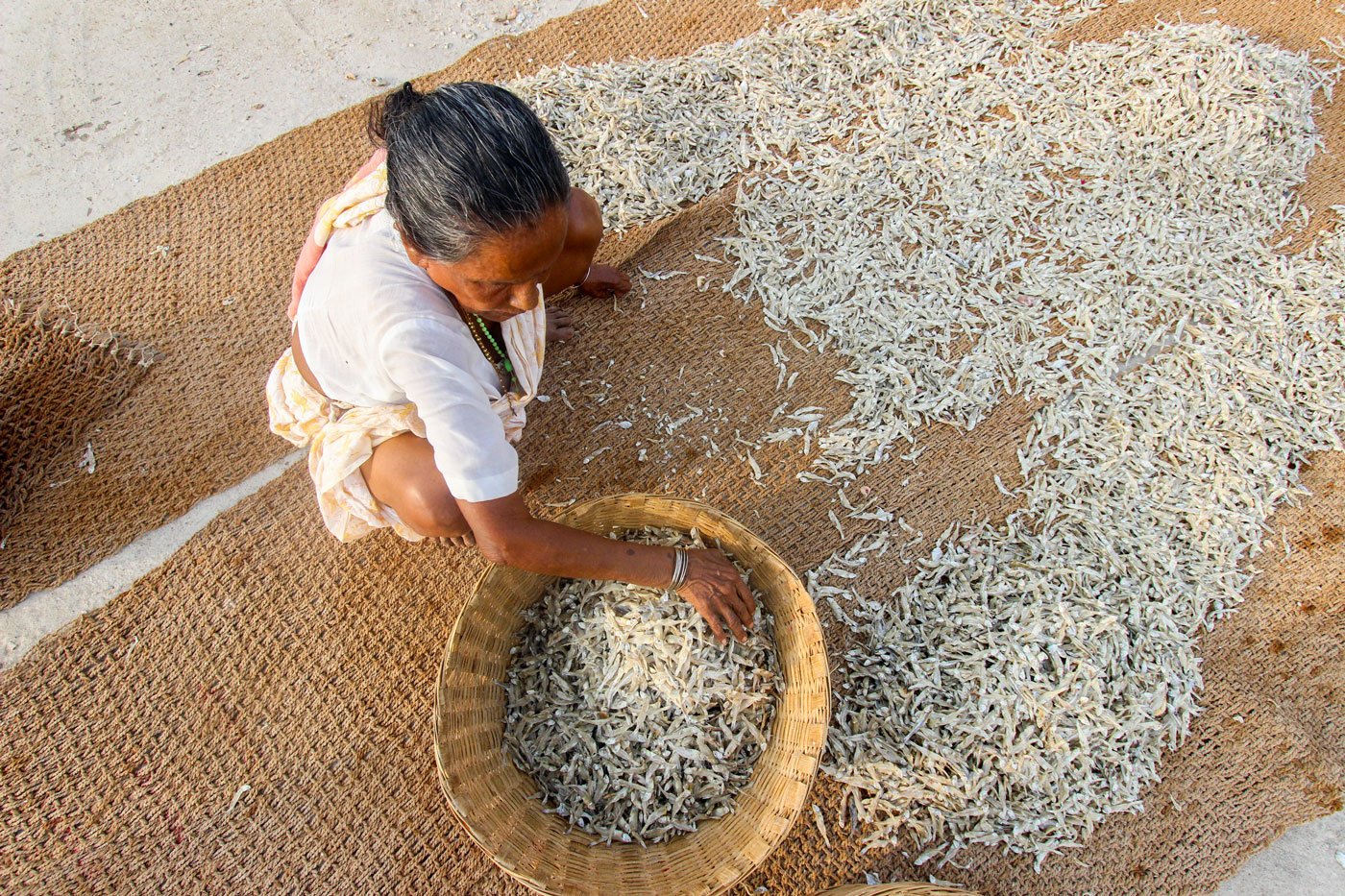 In Maharashtra's Malwan taluka – as across India – women are central to the fish trade, from buying, drying, transporting and storing fish, to cutting and selling it, but don't receive the same subsidies as fishermen

Every morning, Himanshi Kubal dons a pair of trousers and a t-shirt and, along with her husband, pushes their small rowboat on to the water. In the evenings, she’s in a colourful saree, often with an aboli (firecracker) flower in her hair, cutting and cleaning fish for customers.

Himanshi, now in her 30s, has been fishing from a young age, first in rivers and estuaries in Malwan taluka with her family, and three years ago, after they bought the boat, out in the Arabian Sea with her husband. She is one of the few women working at Malwan’s Dandi beach who can swiftly cast a net, and is among the 10,635 residents of the taluka ’s total population of 111,807, who are engaged in fishing

"I used to work on other boats with my husband to sort fish,” she says, “but three years ago we had enough money to buy our own small [non-motorised gillnet] boat, and since then we've been fishing together."

Nearby, an auctioneer shouts “ Teenshe, teenshe daha, teenshe vees !” [300, 310, 320 rupees] while several fishermen haul out crates of catch from their boats and stack them up on the beach for display. Traders and agents weave their way through the crowd and haggle for the best deals. Stray dogs, cats and birds dart in and steal their share of treats.

"We usually fish every morning,“ Himanshi adds. “And when we don’t go because of bad weather or other reasons, we go to the morning market to cut and clean fish. And every evening we're at the auction."

While fishing across much of India is usually done by men, it is typically women like Himanshi who are central to the other components of the trade, like the processing and selling of fish. They form around 66.7 per cent of the post-harvest workforce in fisheries across the country, and are integral to the industry. The last Marine Fisheries Census (2010) records about 4 lakh women in the post-harvest workforce (in all activities except the actual fishing process). In addition, nearly 40,000 women are involved in collecting ‘fish seeds’ (or eggs) for aquaculture.

“It’s exhausting work – buying, transporting, icing and storing the fish, and finally cutting and selling it. And we do it all on our own,” says Juanita (full name not recorded), a trader and widow, sitting in her one-room brick and asbestos house on Dandi beach, where several bills from her fish purchases at the auction are threaded through a metal wire hanging on a wall. 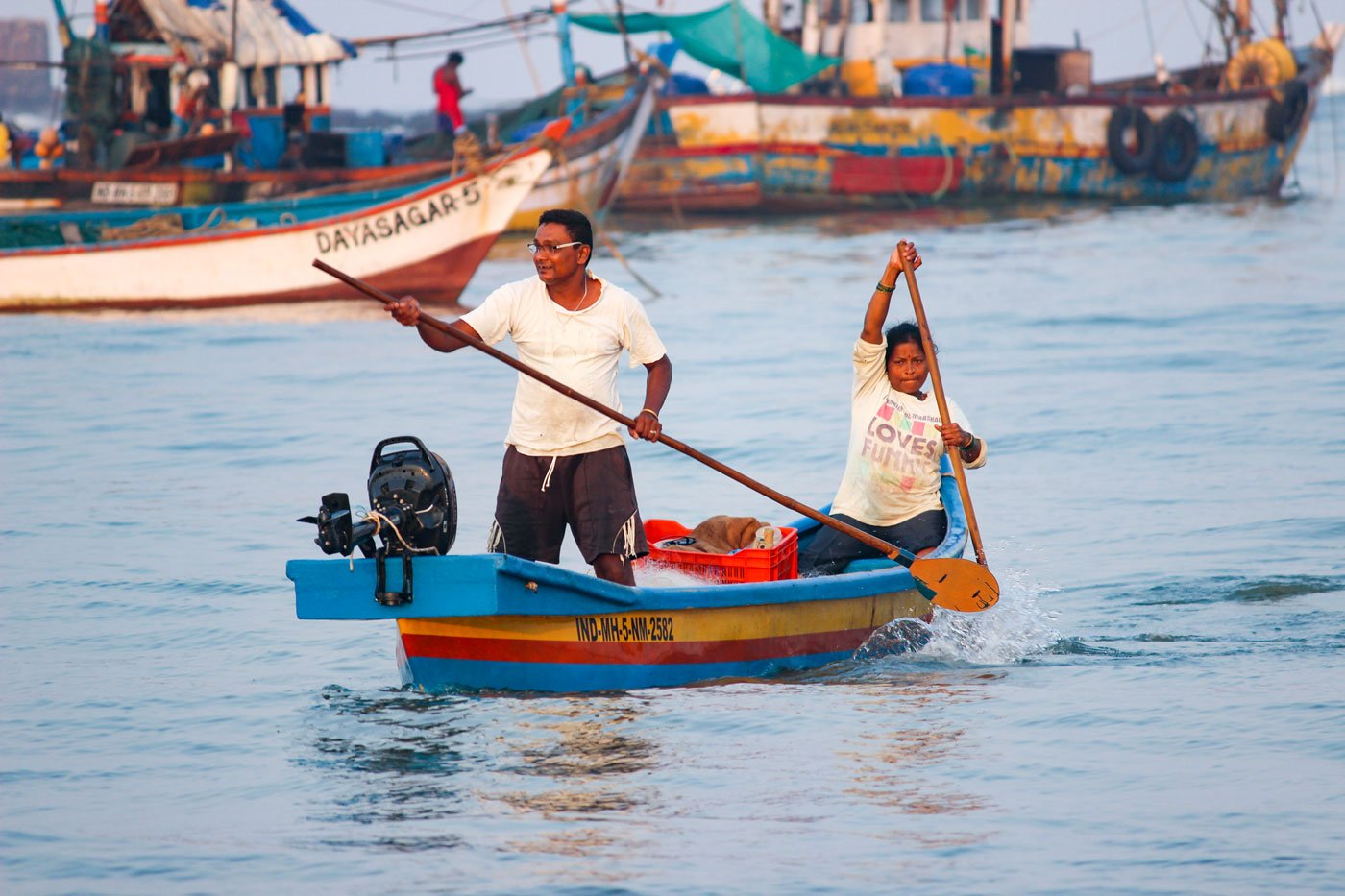 'Three years ago we had enough money to buy our own small boat', says Himanshi Kubal, 'and since then we've been fishing together'

The fish auction would not be complete without traders like Juanita, who purchase a wide variety of fish that they later sell either at the local market or in small towns nearby. Haggling with auctioneers is part of their daily routine, and each has her own strategy for getting the best price – some agree to pay the final price at the end of the auction but convince the auctioneer to throw in a few extra fish. Others quietly push for a small discount (at times even as small as Rs. 5) once the auction process is over.

The long day of selling fish goes by with chatter and discussions about the diminishing catch and which fish to cook for dinner. Women here usually run the fish cleaning processes too. From washing and scaling to gutting and cutting, each fish is handled with surgical precision.

“I left school after the ninth standard, and have been working with fish drying ever since. I had to do something to fill my stomach,” says 42-year-old Benny Fernandes, a labourer in Devbag village of Malwan taluka , who earns around Rs. 4,000 a month. She adroitly hoists a basket of dried fish in one arm while carrying her infant child in the other. Fish drying is also largely done by women across India, and involves long hours of labour under the scorching sun. "During the monsoon we have no fish drying work, so we take on odd jobs and survive,” Benny adds.

Women like Himanshi, Juanita and Benny are particularly vulnerable members of fishing communities, studies have shown, and are especially affected by the present state of fisheries – hit by overfishing, the dominance of mechanised fisheries, declining catch, climate change and other problems faced by small-scale fisherfolk.

And most of the women in this occupation don’t receive the same benefits and subsidies as men working in fishing, though they too are equally dependent on this work. For example, during the monsoon ban on fishing, the families of fishermen in some states receive a monthly compensation from the government. But the families of fisherwomen (without fishermen) are not given the same.

Back on Dandi beach, by the time it is evening, the women start off on another set of tasks – chasing their children, completing household chores and more. With the setting sun, their workplace moves from the shore to their homes. 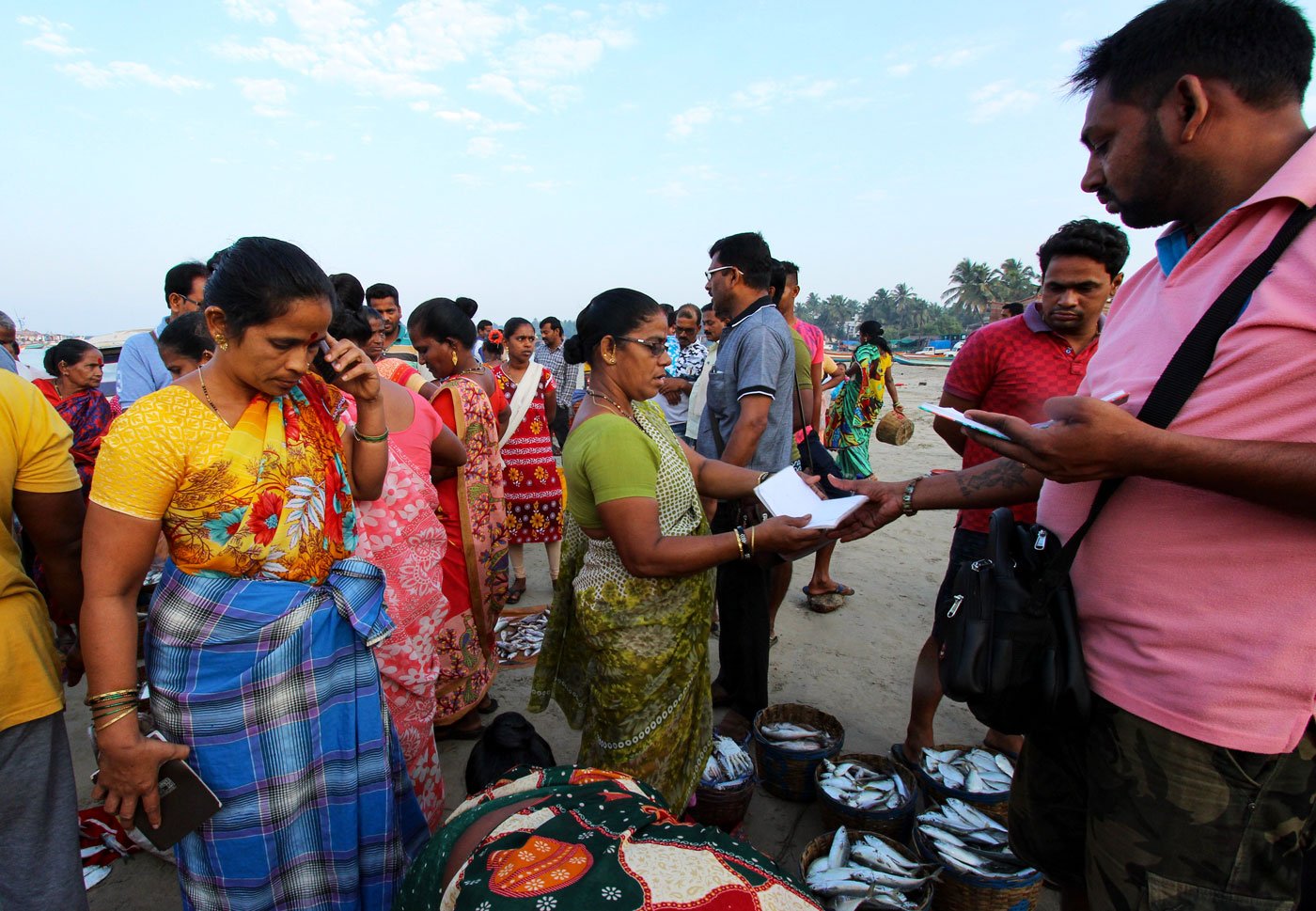 'It’s exhausting work – buying, transporting, icing and storing the fish, and finally cutting and selling it. And we do it all on our own', says Juanita, a trader 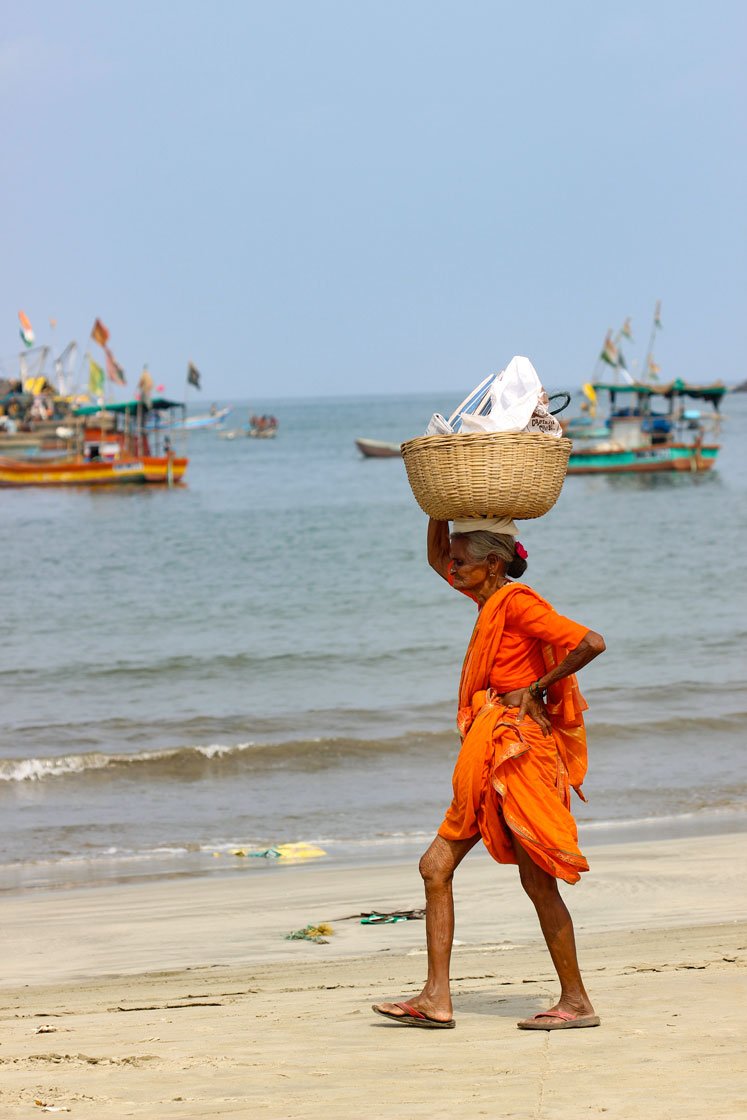 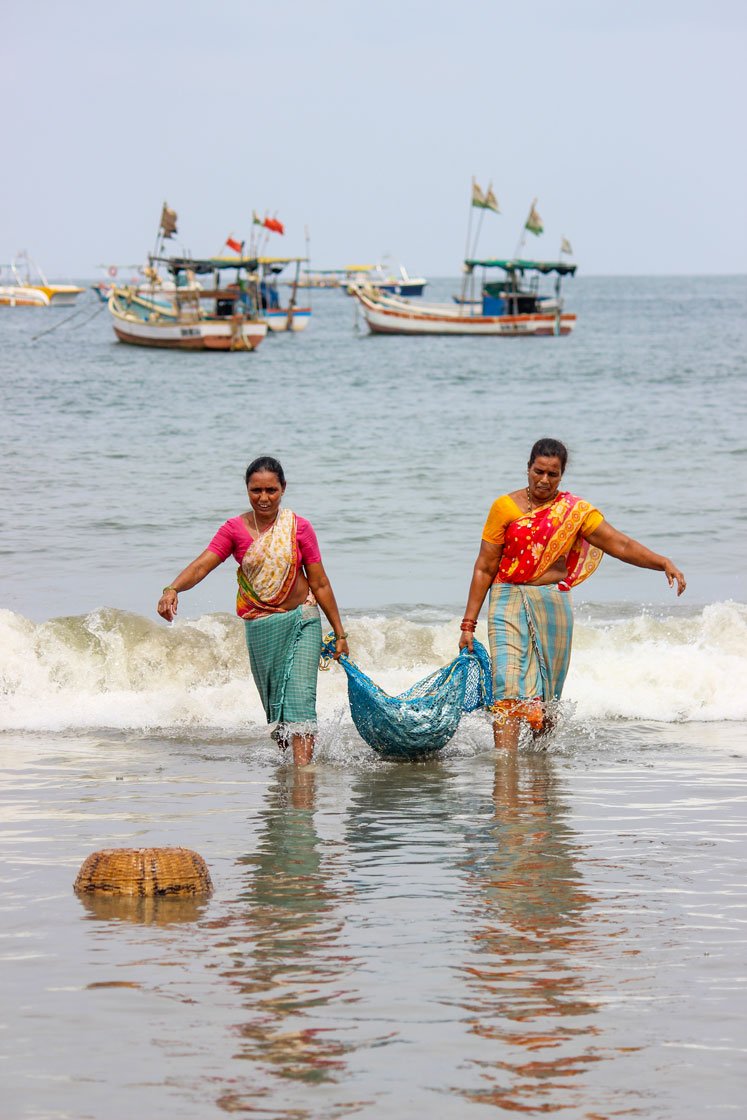 Left: 'We need to do something to fill our stomachs', says an elderly fisherwoman, as she walks a kilometre across Dandi beach in Malwan to the auction site to sell her family’s catch of tarli (sardine). Right: Women wash the fish to be salted and sun-dried 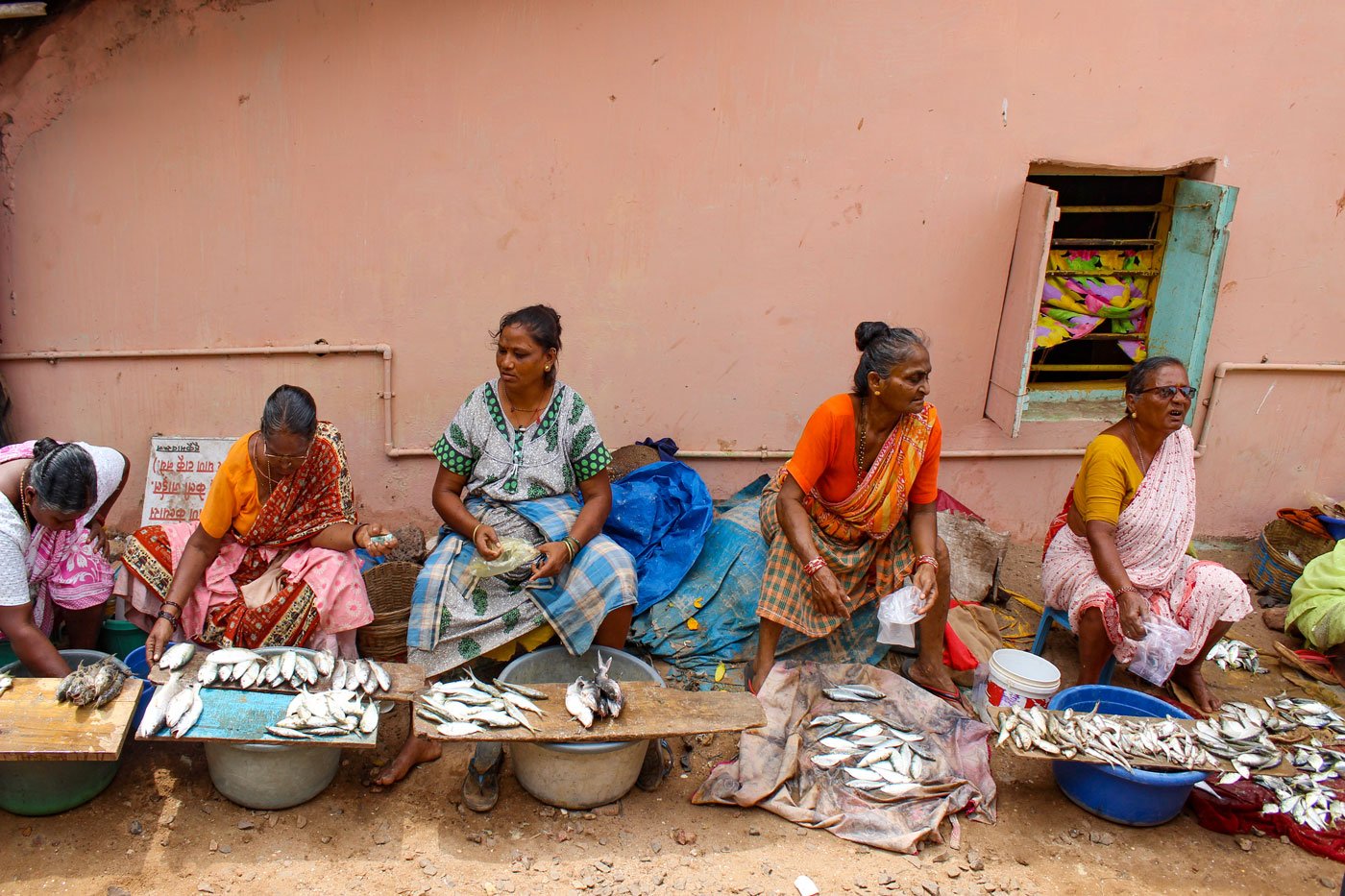 The fish market at Dandi beach, Malwan taluka . Women constitute around 66.7 per cent of the post-harvest workforce in fisheries across India, and are integral to the industry 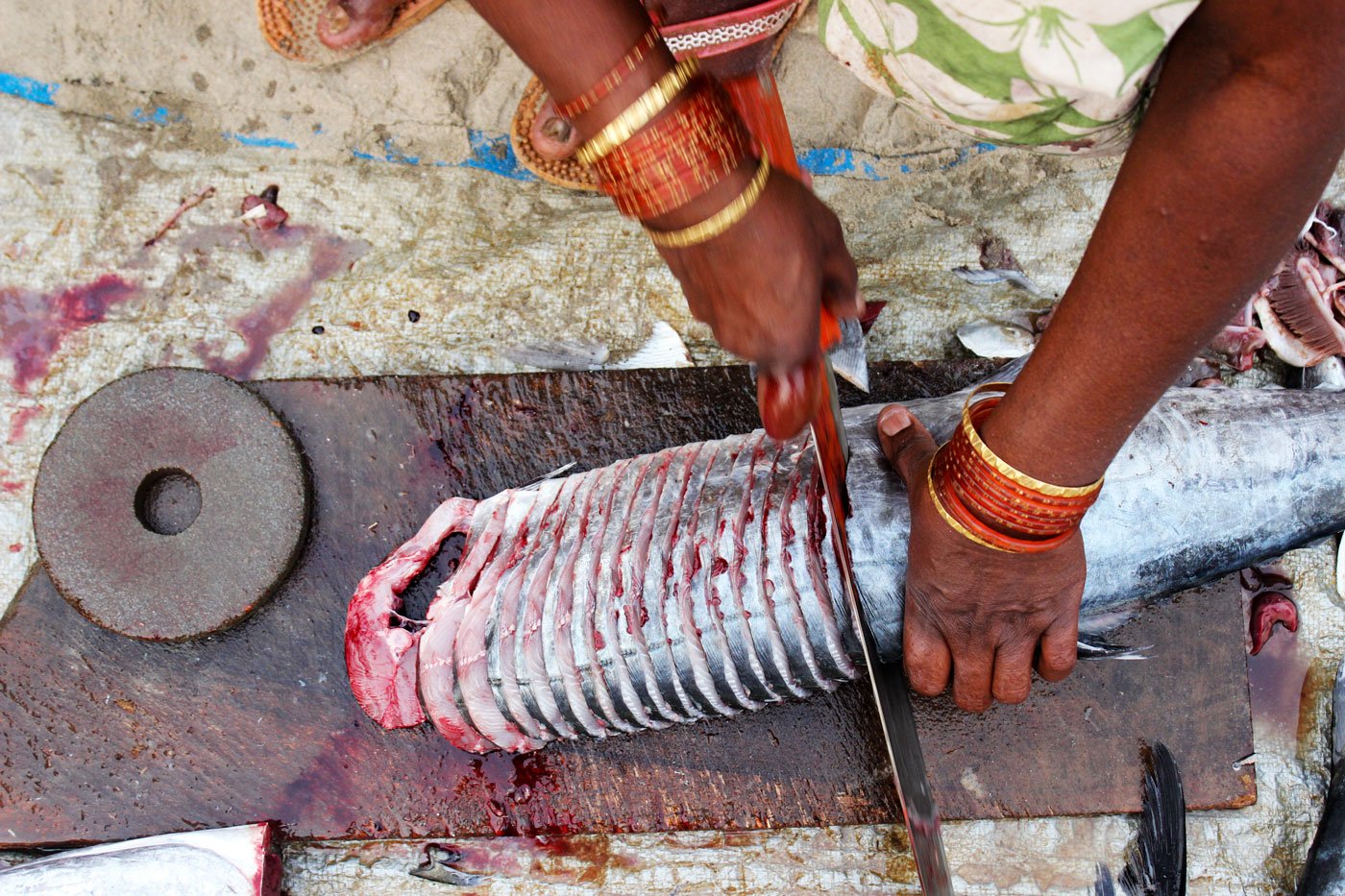 Slicing of a surmai (kingfish). From washing and scaling to gutting and cutting, each fish is handled with surgical precision 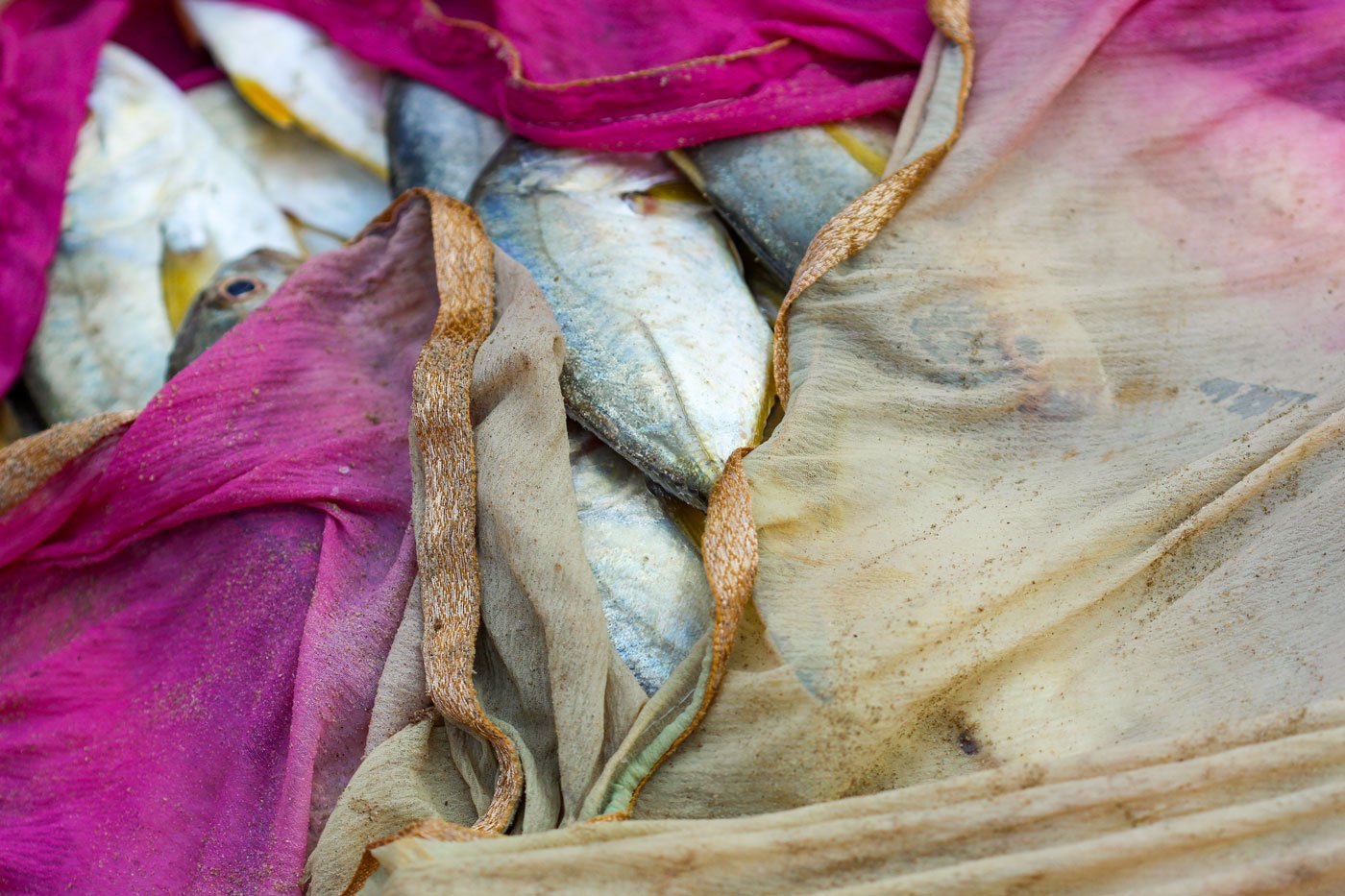 Bangda fish (mackerel) wrapped up neatly, to be sold later in the market 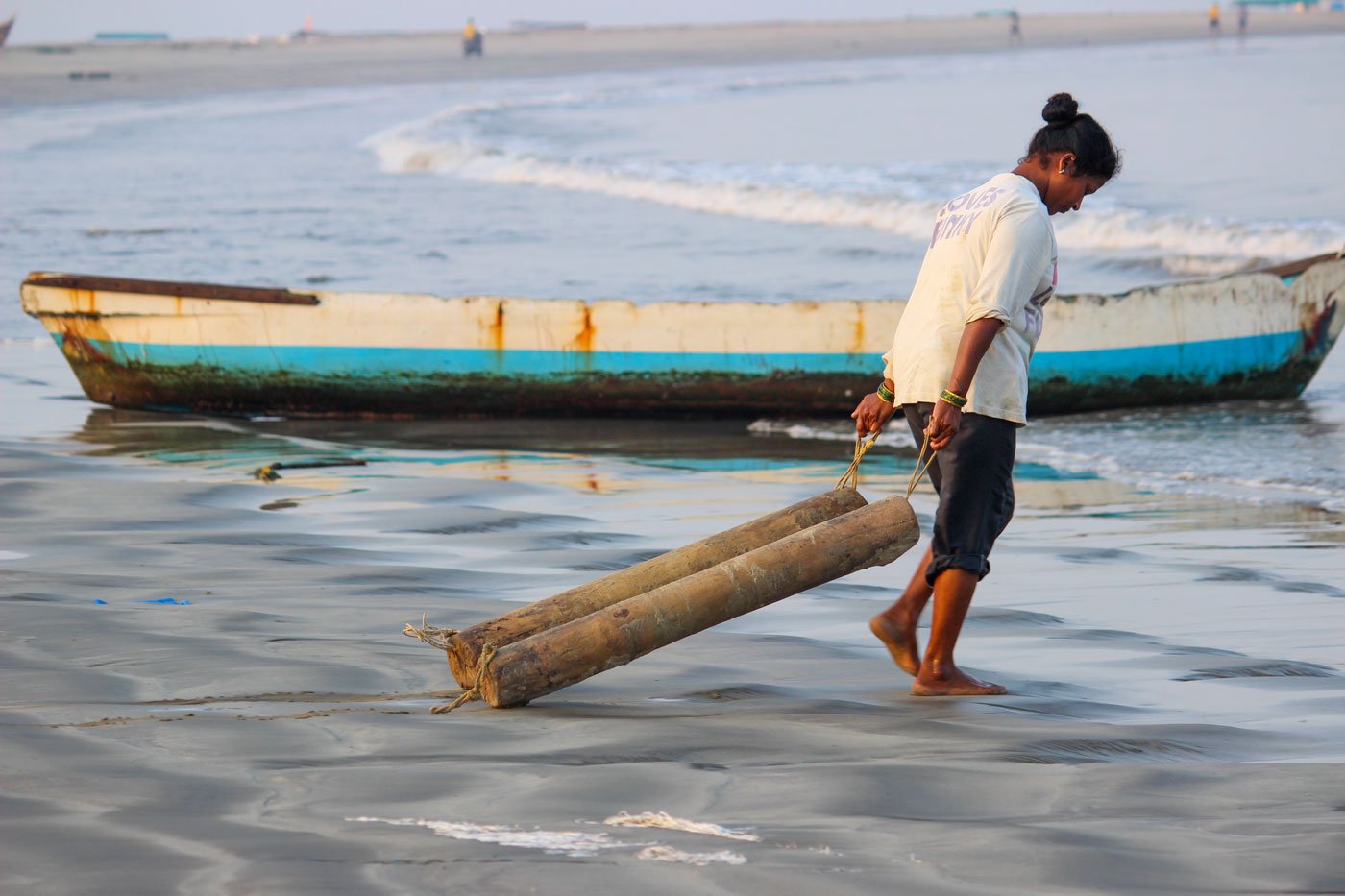 'Local women generally work in selling fish, so they don’t have the opportunity and need to go out fishing. I don't have a choice, I have to go as there’s no one else to help', says Himanshi, after a day of fishing out at sea. Many fishers employ helpers (usually men) to sort their catch, and pay them roughly Rs. 500 for the day’s work each time 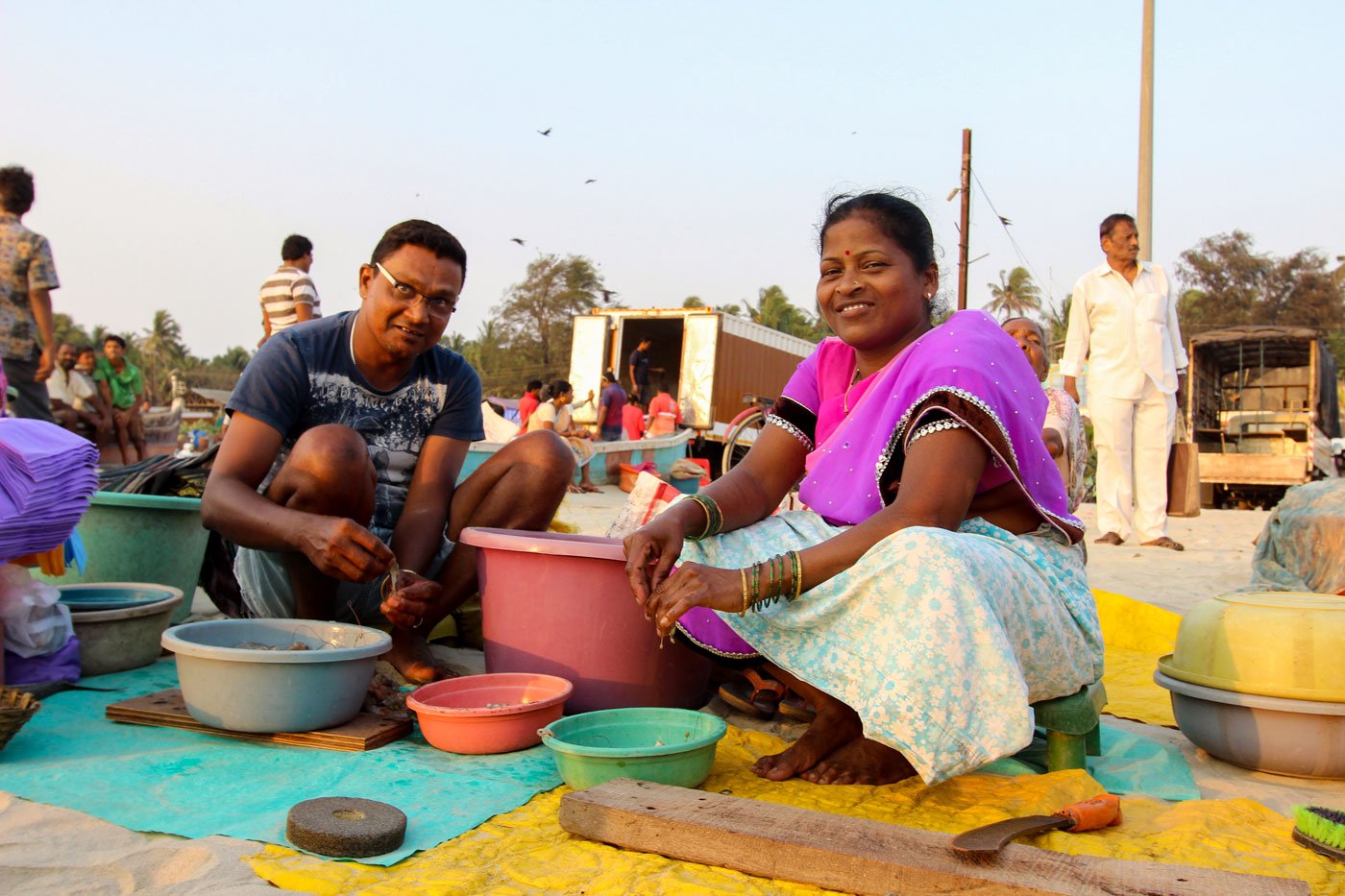 Himanshi and her husband not only go fishing together, but also cut and clean fish alongside each other in the market on Dandi beach 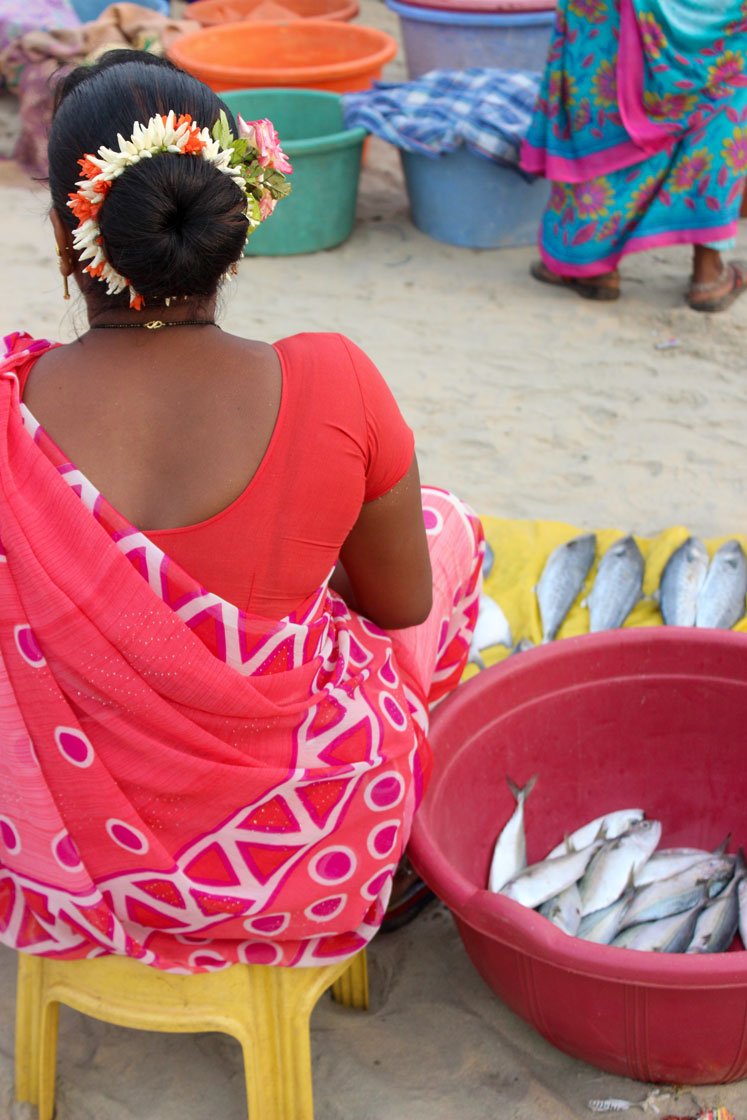 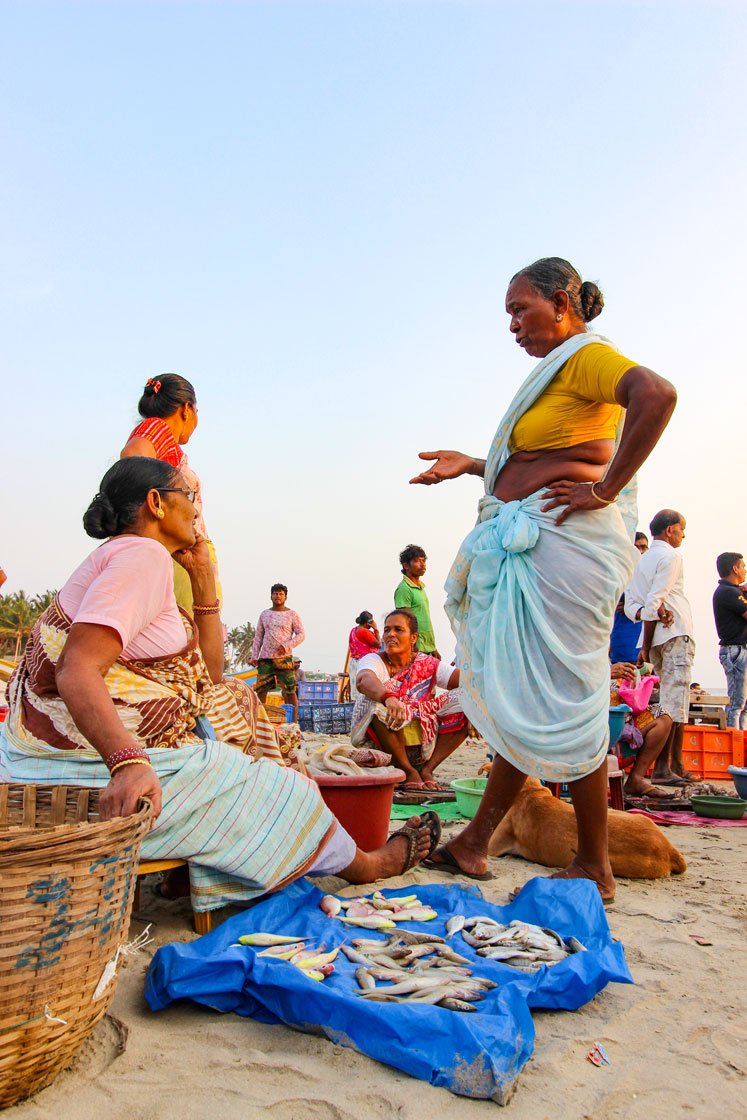 Selling her fish in the evening auction (left) and everyday banter at the evening auction (right). The last Marine Fisheries Census (2010) records about 4 lakh women in the post-harvest workforce in marine fisheries (involved in all activities except the actual fishing process) 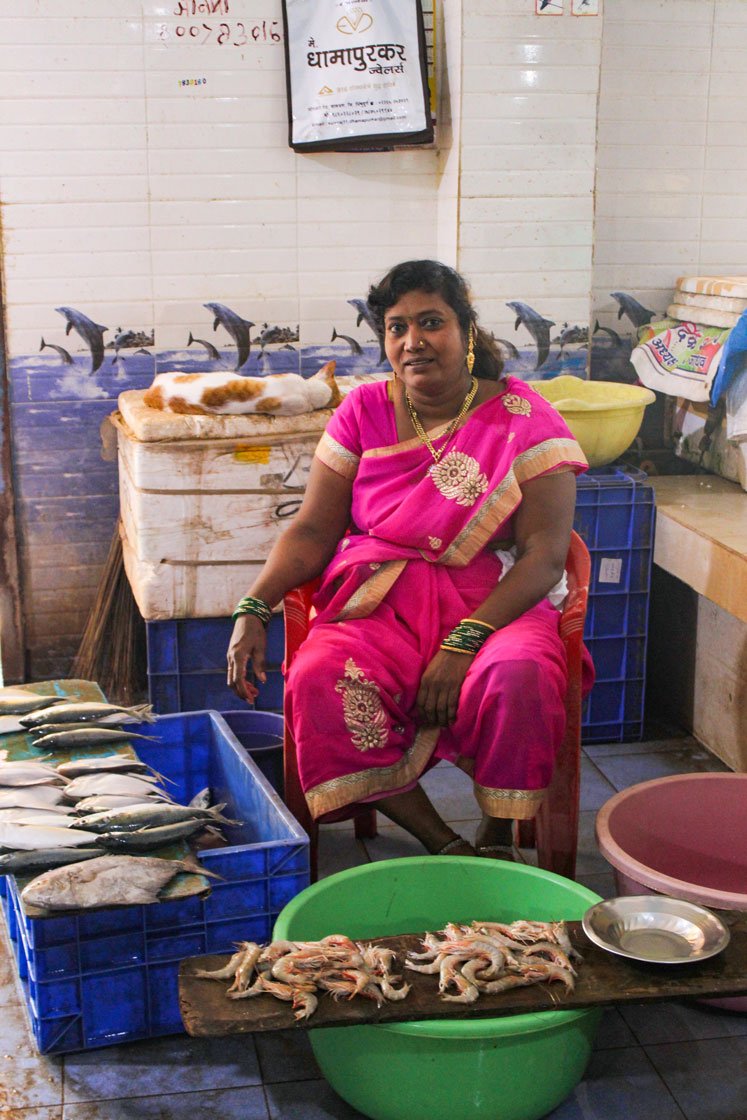 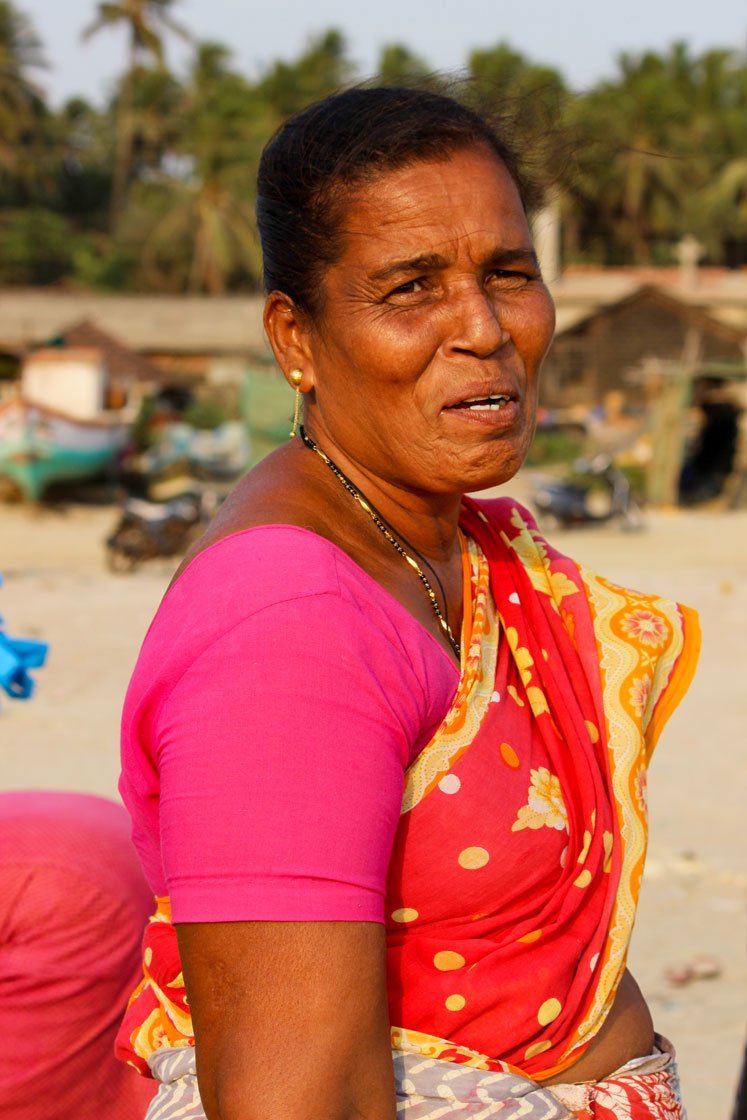 Left: Manisha Jadhav, head of the local fisherwomen’s association, Sindhusagar Macchi Vikri Mahila Sanghatna, Malwan, exudes confidence as she sits with her fish in the market. Right: Women of the community 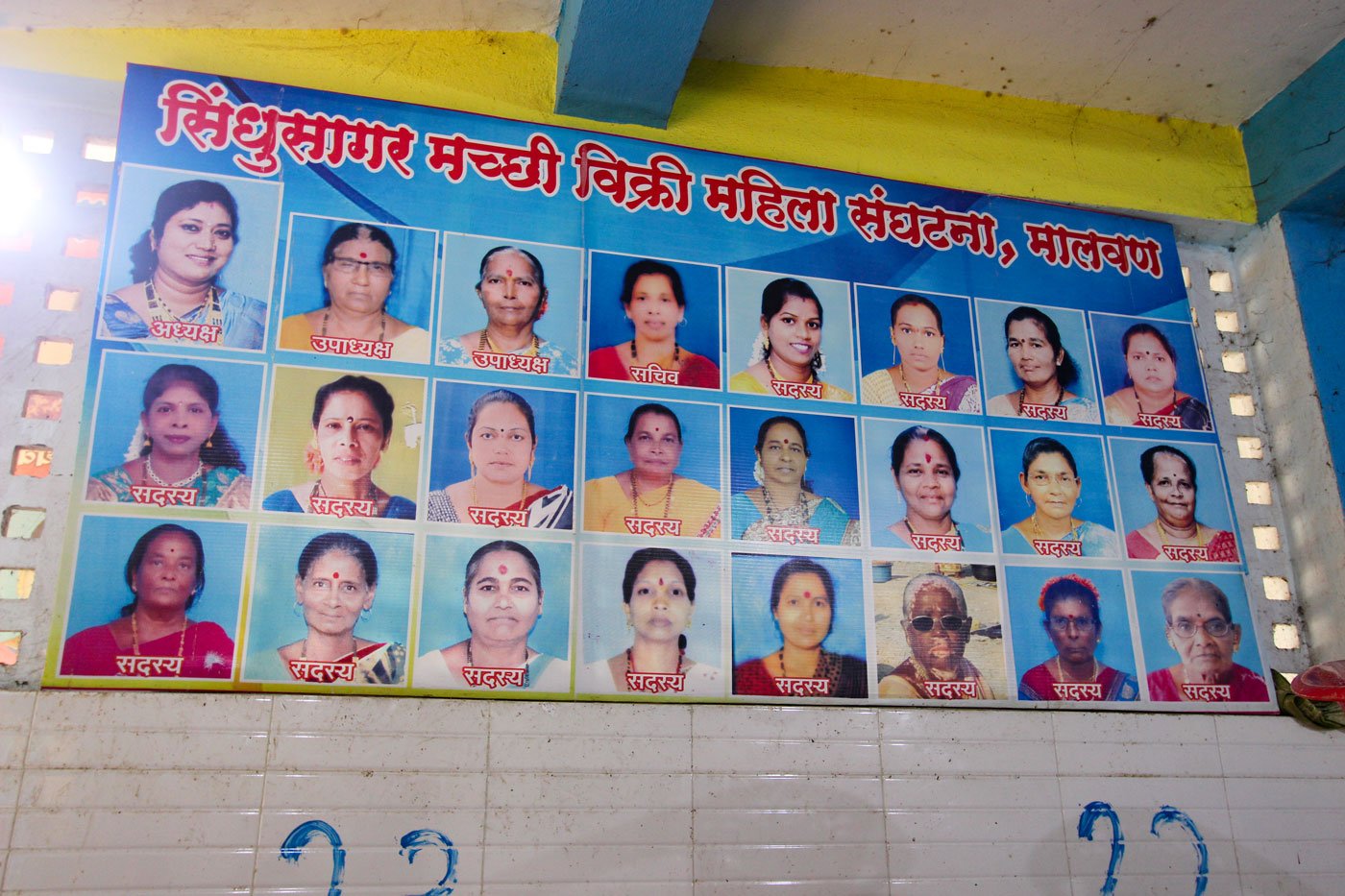 A board at the Dandi fish market with photos of the women who are members of the Sindhusagar Macchi Vikri Mahila Sanghatna, Malwan 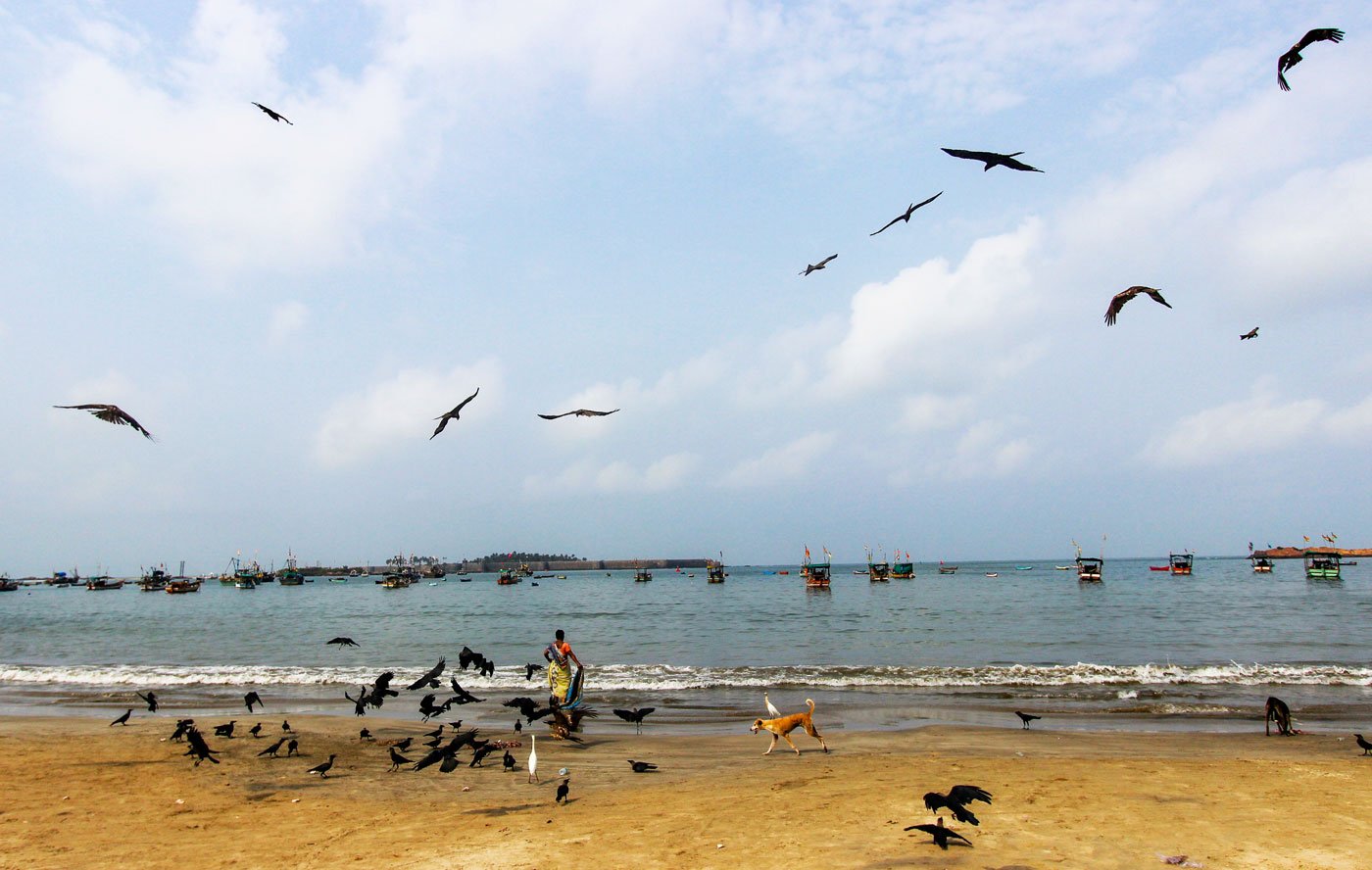 Washing her baskets after selling the last fish of the morning

This article is based on work carried out by the authors as part of a project at Dakshin Foundation.

Trisha Gupta is a Bengaluru-based marine conservationist studying shark and ray fisheries along the Indian coastline.

Manini Bansal is a Bengaluru-based visual communication designer and photographer working in the field of conservation.

Other stories by Manini Bansal