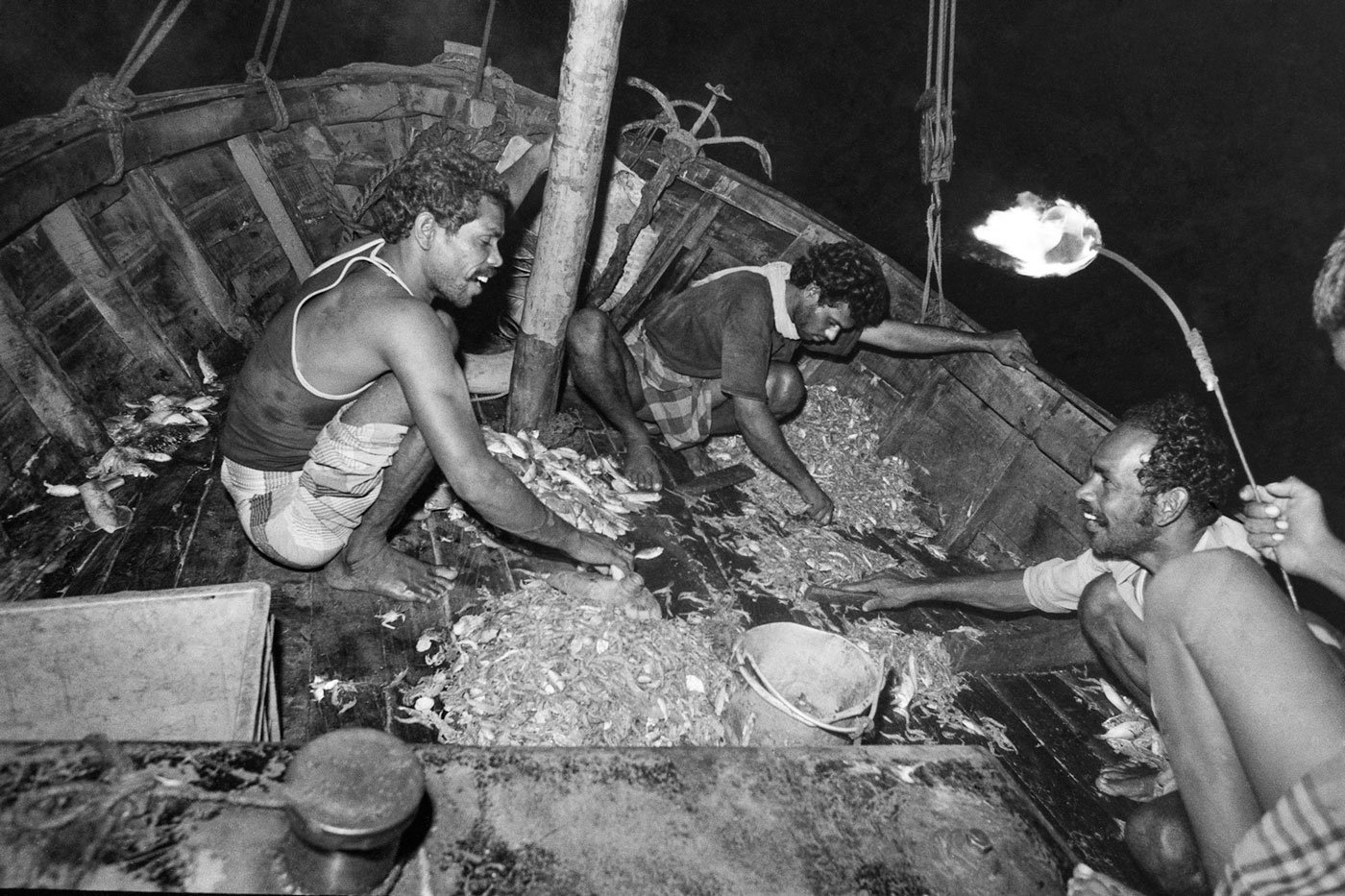 High risk on the high seas, with low rewards

Out on a two-night trip with fishermen off the coast of Ramnad district in Tamil Nadu, who toil, as they put it, 'to make someone else a millionaire'

It was 2 a.m. It was pitch dark. And we were aboard what goes by the proud name of ‘mechanised boat,’ off the coast of Ramanathapuram district (often colloquially referred to as Ramnad) in Tamil Nadu.

The ‘mechanised boat’ was essentially a dilapidated, somewhat ancient vessel fitted with a Leyland bus engine (condemned in 1964, but refurbished and adapted for this craft – and still working in 1993 when I made this trip). Unlike the fishermen, who were all locals, I was clueless about where exactly we were. Somewhere-in-the Bay-of-Bengal is the best I can describe it.

We’d already been out at sea some 16 hours, through some rough patches. But nothing seemed to dim the smiles of the five-member crew, all of them bearing the surname ‘Fernando’ – very common among the fisherfolk community here.

The ‘mechanised boat’ had no source of light beyond a burning kerosene-soaked rag at the end of a stick held up by one of the Fernandos. Which worried me. How was I going to take photographs in this darkness?

The fish solved the problem.

They came up in the nets gleaming with phosphorescence (and I am not quite sure what else) and lit up the part of the boat they were in. Bouncing the flash off them did the rest. I was even able to take a couple of photos without using the flash (which accessory I have always disliked).

An hour so later, I was treated to the freshest fish I’d ever eaten, cooked on the perforated bottom of a big old tin turned upside down. Under and inside the tin they had somehow lit a fire. We were out at sea for two days, one of three such trips I made off Ramnad’s coast in 1993. All the time the fishermen worked cheerfully and with great efficiency in tough conditions with primitive equipment. 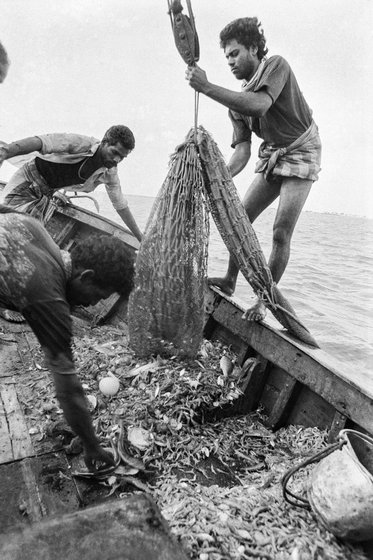 We were accosted twice by the Coast Guard who checked us out – this was the LTTE era and Sri Lanka was just a few kilometres away. The Coast Guard grudgingly accepted my credentials – consisting solely of a letter from the Collector of Ramnad saying he was satisfied I am a bona fide journalist.

Most of the fishermen on this coast are in debt and work for very low wages based on a combination of cash and produce. The most educated amongst them that I met had studied up to Class 6. For the enormous risks they run, the rewards are few, though the prawn they catch (for instance) are worth a fortune in Japan.  Oddly enough, there is not all that much of a difference in class background between the men in this kind of craft and those of the traditional non-mechanised fishing vessels or country boats they sometimes clash with.

Both are impoverished and few own the boats. In fact, almost none in the case of the ‘mechanised’ craft. We made one more haul from the sea early in the morning – and then headed for land. The Fernandos were smiling. This time, more in amusement at my baffled face as I tried to understand the economics of their existence.

It's simple, one of them said: “We work to make someone else millionaires."

A shorter version of this piece appeared in The Hindu BusinessLine on January 19, 1996.