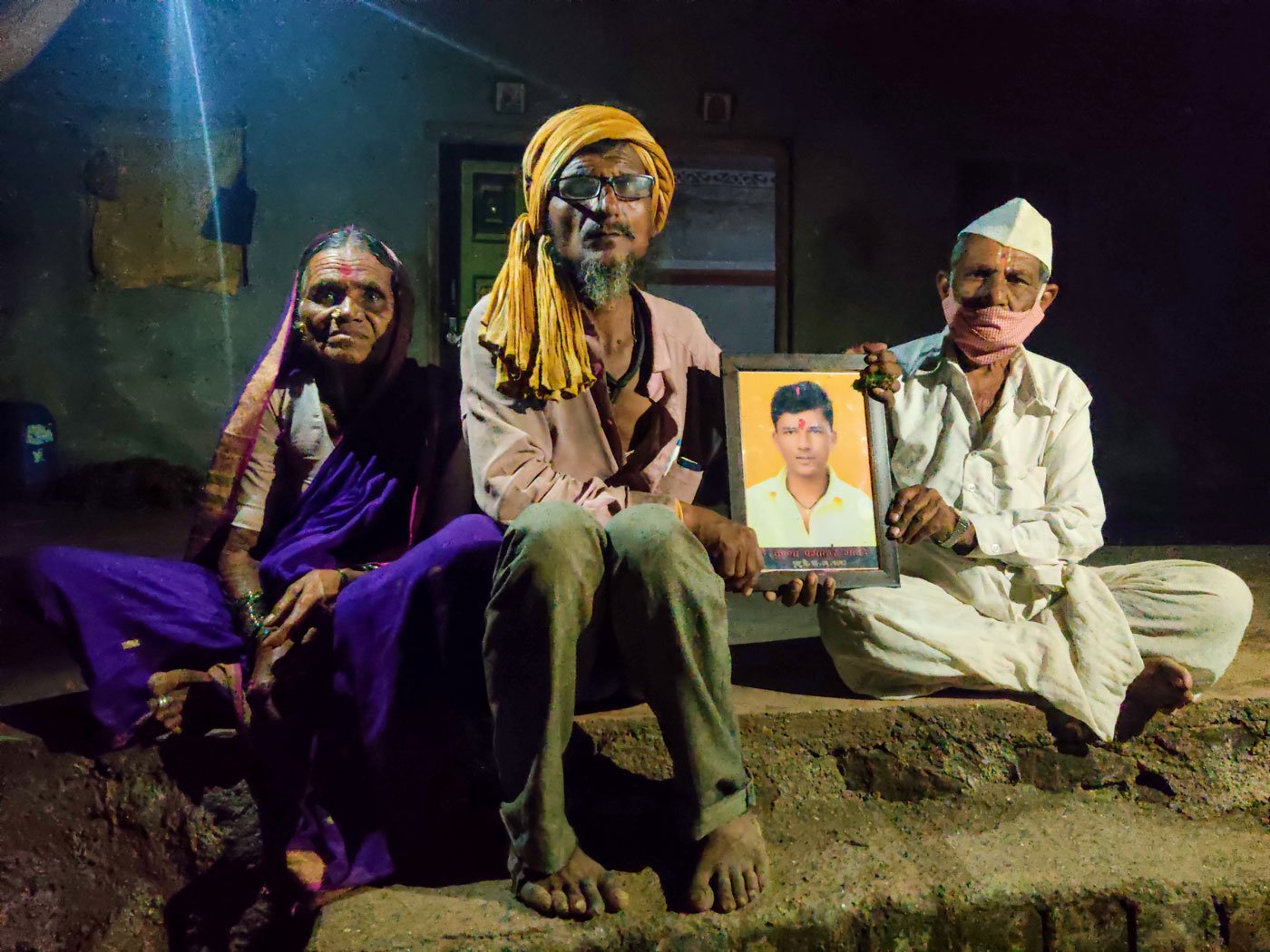 ‘He became irritable, would snap at us’

Covid-19’s impact on livelihoods has unsettled many children and adolescents like Krishna Gawade in Beed district. Trying to cope with anxiety and depression, they are struggling alone with their mental health

Krishna Gawade grew up too soon. When most of the children in his village attended school, he toiled as an agricultural labourer for Rs. 200 a day. When his friends played cricket in the village, he waited at construction sites to land a daily wage job. At age 13, five years ago, he became a breadwinner of his family of six – along with his brother Mahesh, merely three years elder to him.

Their father, Prabhakar, cannot work because he has a mental disability, and their mother is frequently ill, says Krishna's 80-year-old grandfather, Raghunath Gawade, sitting on a stone plank outside his home in Navgan Rajuri village in Maharashtra’s Beed district. “My wife and I are too old to work. So my grandsons had to take up too much responsibility too soon. Their income has sustained the household for the past 4-5 years,” he adds.

The Gawades belong to the Dhangar community, traditionally a pastoralist group, and now listed under the Vimukta Jati and Nomadic Tribes category in Maharashtra. The family has a small piece of land in Navgan Rajuri – less than an acre – where crops like jowar and bajra are cultivated, just enough food for the household’s consumption.

Krishna and Mahesh's earnings – about Rs. 6,000-8,000 a month – covered the family’s living expenses. However, the outbreak of Covid-19 upset the delicate balance of finances. The brothers lost work and income during the nationwide lockdown that began in March 2020.

“We survived on the free ration kits given by activists and the government,” says Sundarbai, 65, Krishna and Mahesh’s grandmother. “But there was no money at home. We could not even buy oil or vegetables. The first three months after the lockdown were devastating.”

Even though the lockdown was eased in June 2020, and economic activity gradually restarted, daily wage work was still hard to come by in Beed. “So Mahesh decided to migrate to Pune,” says Raghunath. But he barely found enough work to send money home. “Krishna stayed back to take care of the family while looking for work in Beed.”

The decision turned out fatal in hindsight. 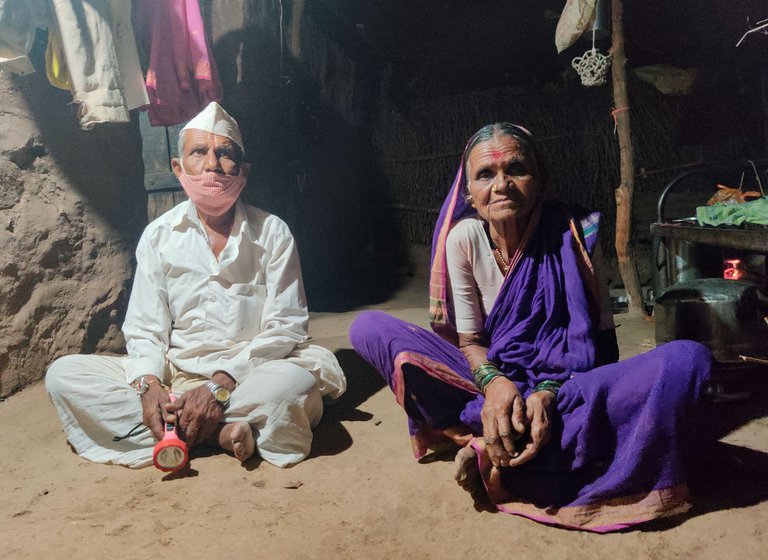 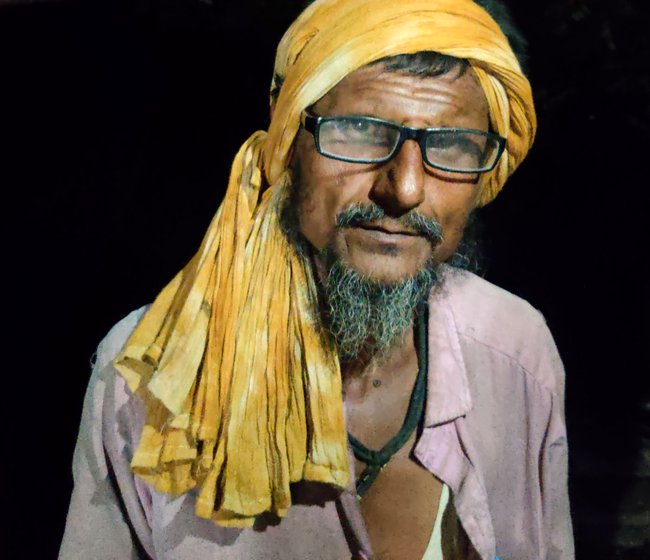 Left: Krishna's grandparents, Raghunath and Sundarbai Gawade. Right: His father, Prabhakar Gawade. They did not think his anxiety would get worse

Krishna struggled with the responsibility. It took a toll on the 17-year-old’s mental health, and his anxiety and depression was evident to his family. “There was no work at the time,” says Raghunath. “He became irritable. Even if we asked him if he had had lunch, he would snap at us. He stopped interacting with others and spent a lot of time sleeping when he didn’t have work.”

The family didn’t think it would end the way it did: One afternoon, in the third week of July last year, Sundarbai walked into Krishna’s room and found his lifeless body hanging from the ceiling fan.

“When Mahesh was here, he had some reassurance,” says Sundarbai. “He felt like there was someone to watch over him. After Mahesh went to Pune, I think he felt as if he alone was burdened with responsibility towards the family. And the irregular income must have made him feel like he couldn’t fulfill that duty.”

After Krishna’s death, Mahesh, 21, returned home. He is back to working as a daily wage labourer in Beed – that is, when he finds work. He is solely responsible for the family’s survival now.

The pandemic, which has affected families like Krishna’s, has pushed many more into poverty since March 2020. According to the US-based Pew Research Center’s report of March 2021: “The number of people who are poor in India (with incomes of $2 or less a day) is estimated to have increased by 75 million because of the Covid-19 recession.” The recession has added to devastation of livelihoods in Beed, an agrarian district that has struggled with drought and debt in a sluggish rural economy for years.

The financial burden borne by adults around them has been affecting children and the youth. Santosh Shinde, a child rights activist and former member of the state commission for protection of child rights in Maharashtra, says that the crisis has had a significant impact on the mental health of children. “Particularly in underprivileged households, children have had to help out the family financially. This kind of a responsibility at such a young age often gets difficult for the kids to handle,” he says. “When everyone around you is struggling to ensure two meals a day, there is no time to discuss mental health.”

Even when children have not had to work, they are troubled by the economic hardship and stressful atmosphere that often leads to quarrels between the adults at home. “That has also had an adverse impact on the mental health of children,” Shinde says. “Before Covid, kids could go out and play, they could travel to another village. Schools are shut now, so there is no getting away from the atmosphere at home.” 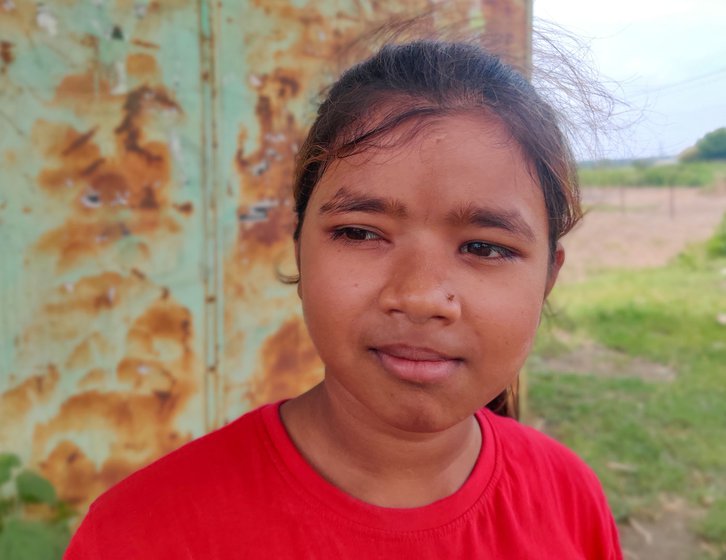 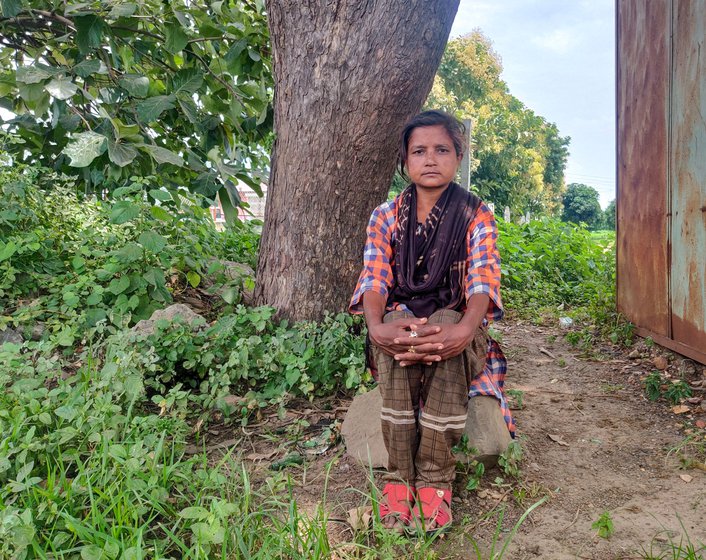 Left: Sanjana Birajdar left home to escape the stressful atmosphere. Right: Her mother, Mangal. "I can see why my daughter fled"

But 14-year-old Sanjana Birajdar did get away. In June 2021, she escaped from her one-room house in Beed’s Parli town and ended up in Aurangabad – 220 kilometres away. Sanjana took her younger siblings, Samarth and Sapna, 11 and 9 years, along with her. “I couldn’t bear it anymore,” she says, meekly. “I just wanted to get out of that house.”

Sanjana’s mother, Mangal, is a domestic worker earning Rs. 2,500 a month working in five households. Her father, Ram, was a tempo driver. “He lost his job after the lockdown,” says Mangal, adding that the family does not own any farmland. “My brother also lives with us. He too is out of work. We have been struggling to survive,” she says.

When Sanjana decided leave home, Mangal, 35, and Ram, 40, had been regularly fighting over money. Their fights often turned ugly. “There are days when there is no food at home and we drink water before going to sleep,” says Mangal. “When you are frustrated, you sometimes take it out on your little children. I admit that things were not good for my kids at home.”

It was worse because of the behaviour of Mangal’s brother, who, frustrated at not being able to find work, became addicted to alcohol. “He drinks a lot, comes home drunk and beats me up,” says Mangal. “He takes heavy utensils and hits me on my head. I have suffered injuries and bruises because of him. He says I don’t give him enough to eat. I don’t know what to tell him. There is nothing to eat at home, how am I supposed to fix a meal?”

Her abusive brother, Mangal says, doesn’t care that her children witness the beatings. “He beats me in front of them. So now whenever he comes home drunk and creates a scene, they go out of the house,” she says. “But they can hear everything, they understand everything. I can see why my daughter fled.”

Sanjana says she felt stifled and the only way to escape the feeling was to escape the house. But once she boarded a train from Parli with her siblings, she didn’t know what to do next. They travelled without tickets, and no destination in mind. “I don’t know why we got off at Aurangabad,” she says. “We sat in the [train] station for a while. The railway police saw us there and admitted us into a children’s hostel,” she adds. 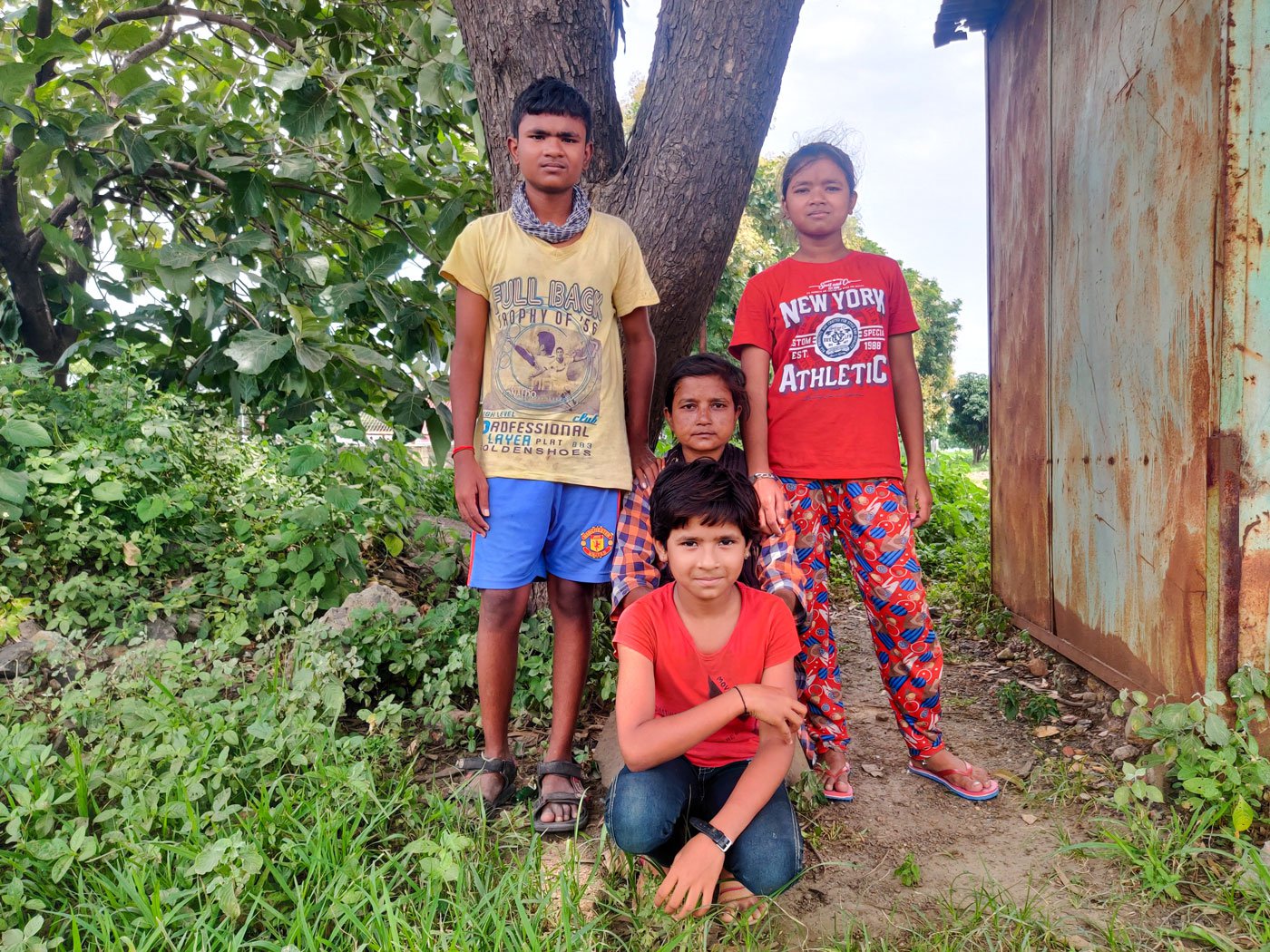 Mangal with three of her four children: the eldest, Sagar (left), Sanjana and Sapna (front). Loss of work has put the family under strain

The three of them stayed in the hostel for two months, till the last week of August 2021. Sanjana finally told the hostel authorities that they were from Parli. With the help of local activists, the child welfare committees of Aurangabad and Beed districts reunited the children with their parents.

But nothing had changed at home when they returned.

Sanjana is waiting for her school to reopen. “I like going to school. I miss my friends,” says the teenager who wants to become a police officer when she grows up. “I wouldn’t have run away if the school had been open,” she adds.

Grappling with anxiety, children across Maharashtra are struggling to deal with the pandemic’s fallout. A report on August 8, 2021 in Prajapatra , a Marathi daily published in Beed, said 25 persons aged below 18 had died by suicide in the district in the first seven months of the year.

“When children don’t have the resources to entertain themselves or constructively stimulate their minds, a very big vacuum sets in. At the same time, they are witness and participants to the downfall in whatever lifestyle they had. These are all reasons for their depression,” says noted psychiatrist Dr. Anand Nadkarni, founder of Institute for Psychological Health, a not-for-profit that focuses on community mental health, headquartered in Thane. 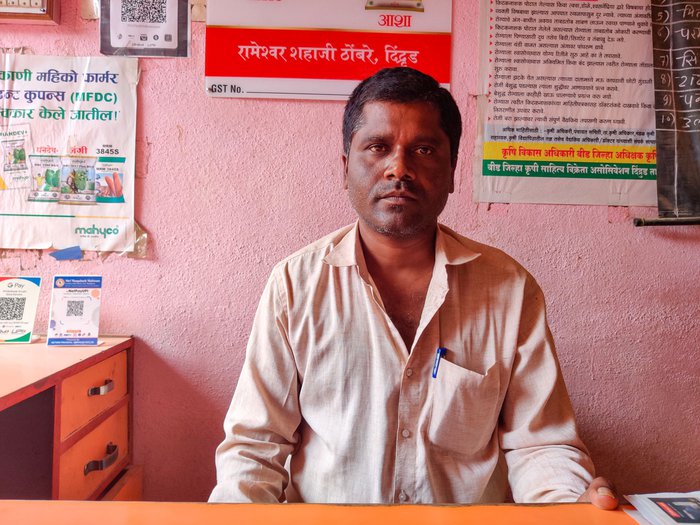 Rameshwar Thomre at his shop, from where his son went missing

Children across Maharashtra are struggling to deal with the pandemic’s fallout. A report on August 8, 2021 in Prajapatra , a Marathi daily published in Beed, said 25 persons aged below 18 had died by suicide in the district in the first seven months of the year

Depression in children and adolescents has increased since the outbreak of Covid-19, Nadkarni adds. “It is called ‘masked depression’,” he says. “It doesn’t display in the adult way. Many times, family members have no clue. They are unable to identify the cues of emotional distress, and adolescents are unable to express it. The depression goes unnoticed, undiagnosed and untreated.”

Rameshwar Thomre did not notice anything amiss with his child either.

Rameshwar's 15-year-old son, Avishkar, went missing on February 28, 2021, in Dindrud, their village in Beed’s Majalgaon taluka (also called Manjlegaon). A week later, Avishkar's body was found in his school. “The police confirmed there was no foul play,” Rameshwar says. “The school was shut. But there was a gap under the door. He managed to sneak in and hanged himself.”

Because the school was shut, the body had been in that position until it was discovered. “We looked for him everywhere, but couldn’t find him,” says the father. “Some kids were playing cricket in the vicinity of the school, and the ball mistakenly went in through the window. A boy managed to get in from under the door, and saw him.”

Rameshwar is pondering what pushed his son to end his life. “He did not say anything. He was very close to his brother, who is as confused as we are,” he says. “The day he vanished, he opened the shutter of our shop and turned to tell me he’d be back after lunch. He never returned.”

Rameshwar owns and runs a krishi seva kendra , an agribusiness centre selling seeds, fertilisers, pesticides and other farming products. “We faced the same distress everyone faced in the lockdown,” he says. “I doubt if that was the reason. I genuinely don’t know. I wish I did.”