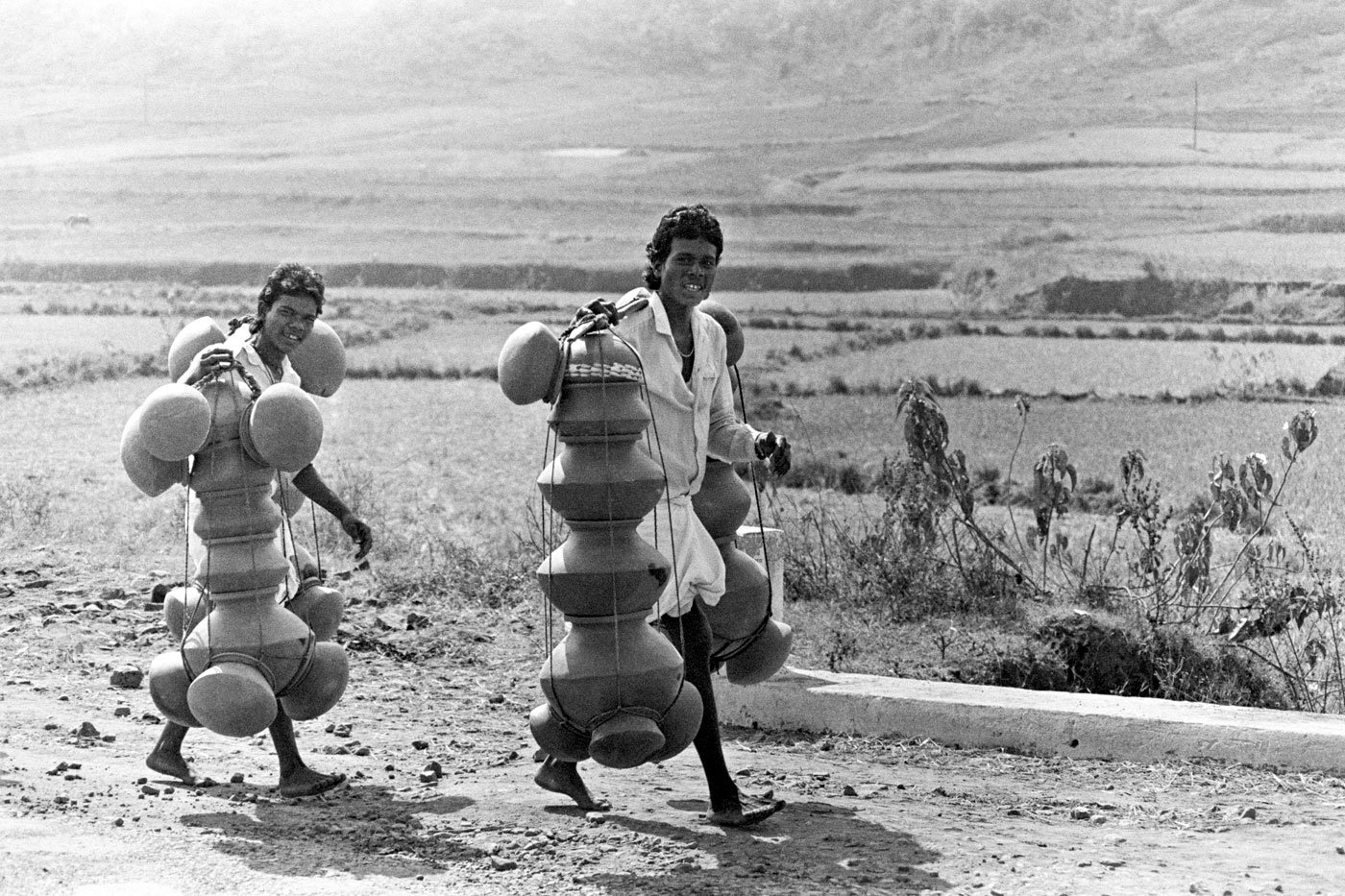 Haat to haat in Malkangiri

Adivasis in Odisha’s Malkangiri district depend on the haat or rural market to sell what they produce. A few times, though, they might not reach there

They’d already covered over 20 kilometres, but still maintained their rhythmic, almost goose-stepping gait, moving swiftly and in single file. They were dressed in their best, the least damaged clothes they owned. And they were hurrying to a weekly haat or rural market in Malkangiri district in the huge Koraput region. Whether they would reach there was another matter. A local trader – or creditor – might accost them en route and buy their entire stock for a pittance. Perhaps then even make them  carry it to the haat for him.

The four-man troupe kindly slowed down and halted to talk to me. These men are not kumbhars or traditional potters. They are Dhuruas, an Adivasi group in this region. The two who spoke to me, Majhi and Nokul, assured me that pottery was not their traditional occupation. They seemed to have learned it at workshops held by a non-profit group. With agriculture not doing well at all, they thought they’d take a shot at making pots – and their products were simple but really good, artistic even. However, these too were doing badly, they said. “Everywhere,” complained Nokul, “people are using plastic pots and buckets.” And that was as far back as 1994. Plastic has since spread like a perennial, self-perpetuating pandemic, with many variants – and no cure in sight.

“Yes,” said Majhi. It is true that the “ sahucar often takes our stock at a lower price that he sets. But then, we owe him money.” The trader then sells the pots at a much better price at the haat , without much exertion. He has other Adivasis there to do the hawking for him. However, several haats do see the original producers selling their wares. Different clusters of villages can hold their markets on different days of the week. So though the event is weekly in each location, a haat is held every day somewhere in the region. 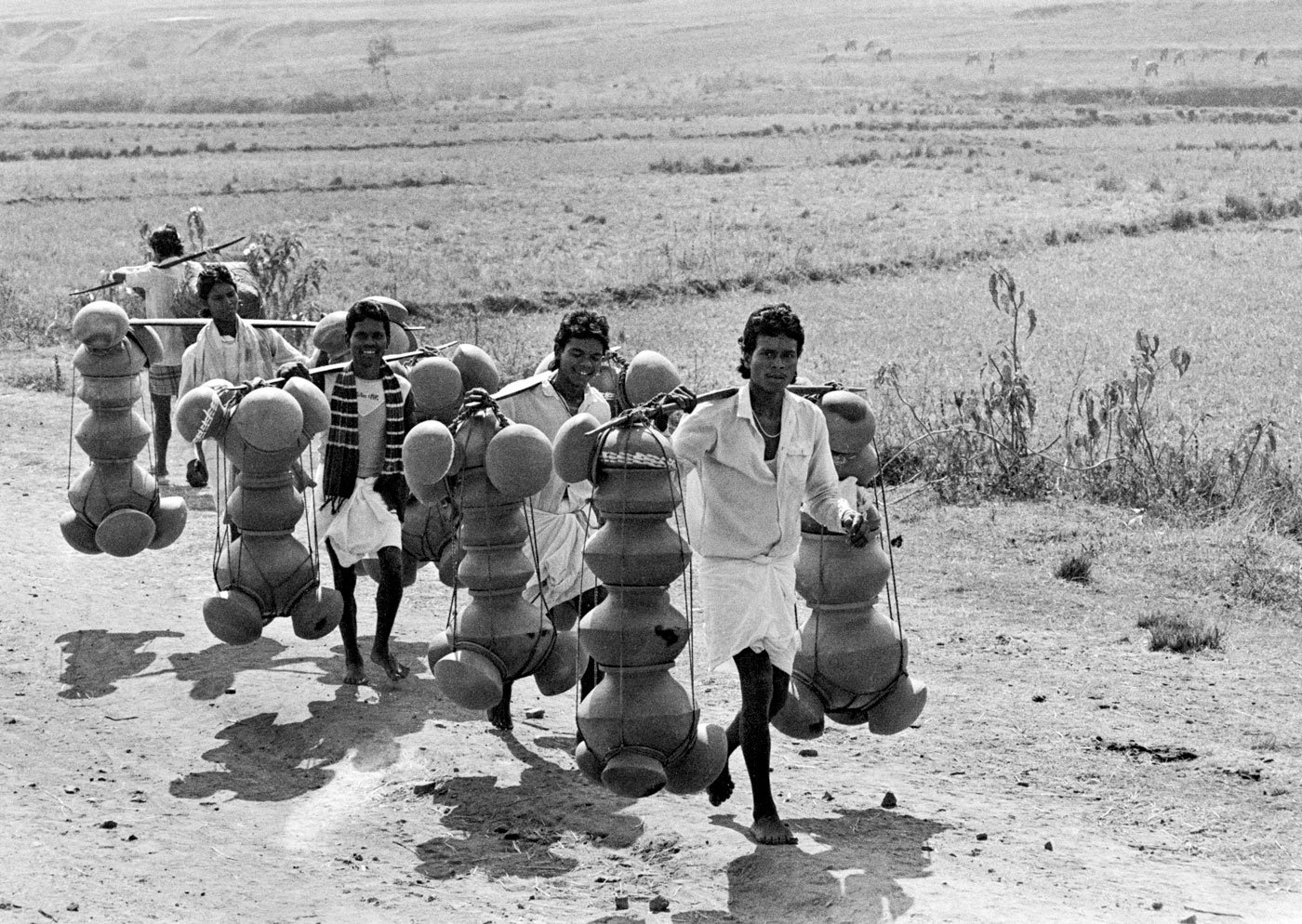 The Dhuruas have had other make-in-India problems. The official StatisticalProfile of Scheduled Tribes in India and the Odisha state list of ScheduledTribes both spell the name of tribe as Dharua and also as Dhuruba and Dhurva of Dhuruva. In many school certificates and other documents I have seenwith some of them, the tribe’s name had been spelt as Dhurua. This led to several losing the benefits that are due to them, because low-level bureaucrats had told them there was no tribe listed by that name. It took a long time to settle that stupidity.

The village haat presents a striking microcosm of an area’s economy. Most things produced in that region will be on display and sale there. All transactions within a small field bustling with activity, life and colour. Our brief conversation done, the four men moved on, after thanking me graciously for taking their photographs(for which they insisted on posing the way they wanted to). I watched them go, a little apprehensively: their beautiful, graceful forward movement in single file, very close to each other. So close that if anyone missed a step, or stumbled, there was going to be a pile up and broken pots. I’ve had that fear many times in Malkangiri – but mercifully never seen it come true.

A shorter version of this piece first appeared in The Hindu BusinessLine on September 1, 1995.