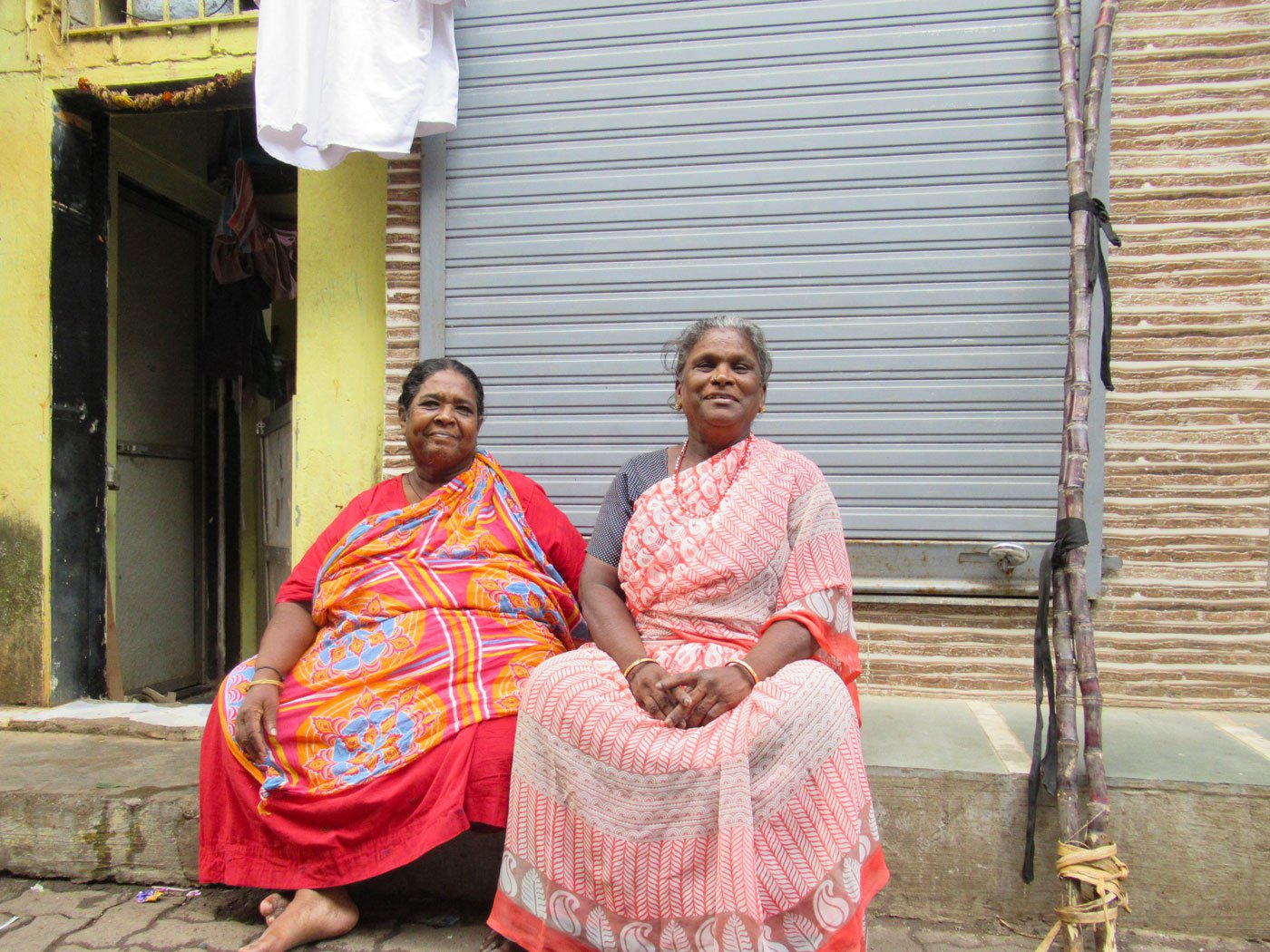 Growing 50 years older in and with Dharavi

Pushpaveni and Vasanti, who have spent half a century in Mumbai’s Dharavi, go down memory lane – and speak of arriving there as brides, a world measured in paise, of contentment in this extraordinary locality

“Using hair colour will make your hair more white,” declares Pushpaveni Pillai. “Like this,” she emphasises, pointing to a tile of the white-blue chequered floor. In her late 60s, she has just a few strands of grey herself. “Coconut oil and Lifebuoy soap only,” she insists, stressing the ‘only’ in English – that’s the key.

She is sitting on that tiled floor one afternoon and speaking of years past and times present. “In my mother’s time,” she says, “her mother-in-law would give her a piece of coconut, and she would chew on it while bathing and rub it into the scalp – that was her coconut oil.”

Vasanti Pillai, sitting next to her, solemnly concurs. Both women (distantly related) have spent around 50 years in single rooms in the same lane in Dharavi. Both speak of a rare contentment with their lives, both are bonded by a decades-long companionship, and both have a roomful of memories of a world that’s changed.

Pushpaveni came to Dharavi as a young bride at the age of 14-15. The wedding was in a mandap in a maidan down the same lane, the boy lived in Dharavi. “He was 40 years old,” she says. So much older? “Yes, he was short-statured [so we didn’t realise], and in those days no one checked these things. The ceremony was followed by a meal of sambar- rice,” she recalls, “vegetarian only.”

She moved into the room that Chinasamy, her husband, had purchased a while ago for Rs. 500 – then a gigantic sum of money. He had a job in a local workshop that manufactured surgical threads and wires – starting with a Rs. 60 salary and retiring in the mid-1990s with a monthly income of Rs. 25,000. 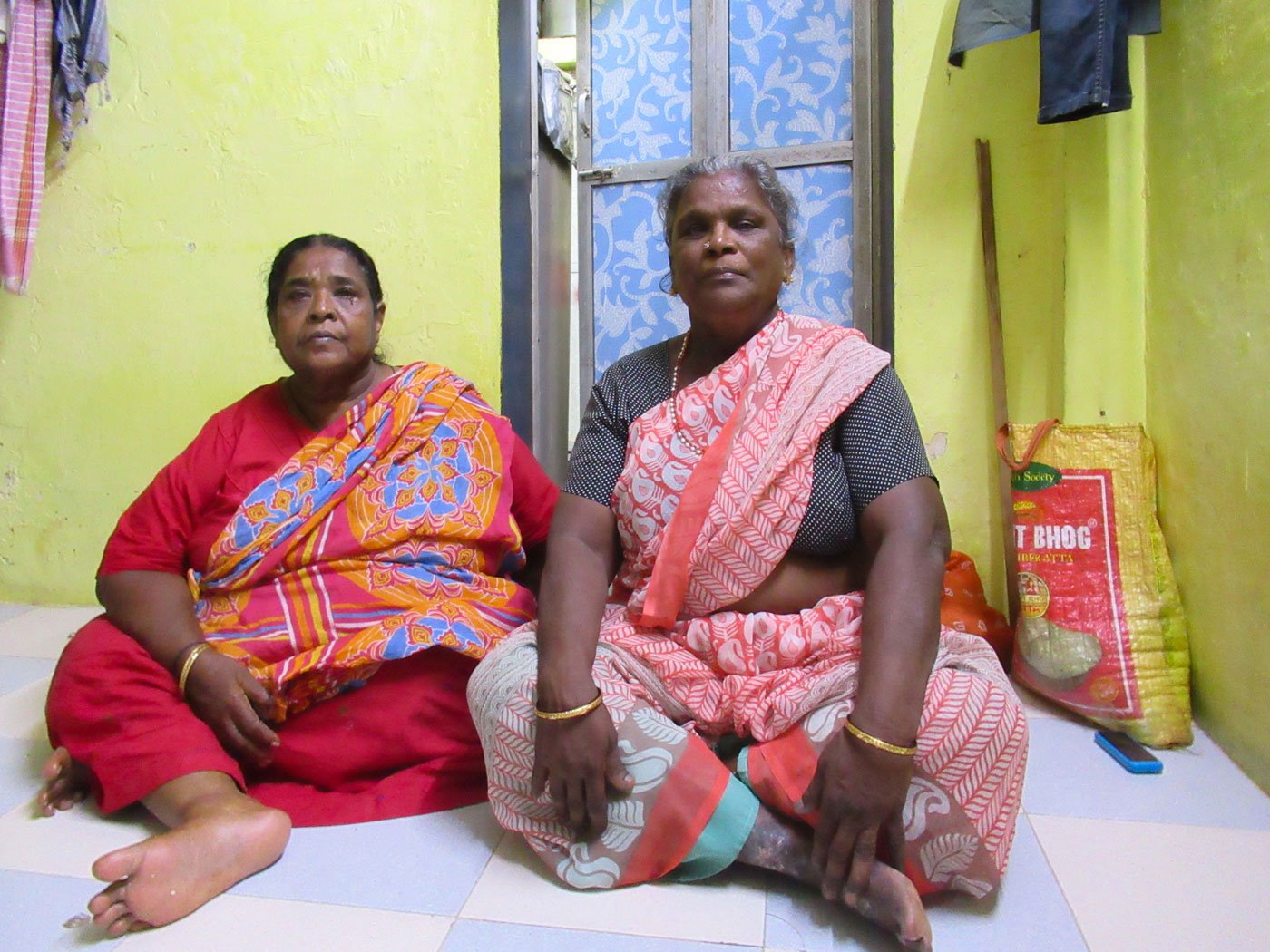 Pushpaveni (left) came to Dharavi as a bride at the age of 14-15, Vasanti arrived here when she got married at 20

The roughly 200-square feet room (with a mezzanine loft added on as the family grew – “at one time, we were nine”) became her home for the next 50 years – down a lane that twists into Dharavi from the ‘T-junction’, past a perennial thicket of tempos and autorickshaws. “My three children were born while I lived there, they were married while we were there, they had kids and grandkids while I lived in the same room.”

Vasanti, now in her mid-60s, moved into the same lane at the age of 20, when she too got married. Her mother-in-law and Pushpavani's husband were siblings, so Vasanti had family in Dharavi when she arrived here. “I’d not left this galli [lane] and gone to live anywhere else since then,” she says.

In the 1970s, when both women came to Dharavi, the area was different. “The rooms were smaller,” Pushpaveni says, “but they were spread out, there were many open spaces in between.” Her home was on the first floor – a small all-in-one room with a community toilet some distance away down the lane. “Now the buildings are crowded so close together that you cannot even walk,” she adds, holding her hands parallel to indicate the narrowness. (Over time, Dharavi, which is located in north-central Mumbai, has expanded to accommodate an estimated one million people – with slums, buildings, shops and workshops stretching across more than a square mile.)

“This place was a khadi [creek], all jungle,” recalls Vasanti. “Mahim creek’s water would come up to the police chowky [at T-junction]. Then they poured and poured mud [creating ‘land’] and made rooms.” The now highrise-strewn Bandra-Kurla Complex nearby, she recalls, was a deserted marshy stretch covered with mangroves. “We were afraid to go anywhere close. We women would go together up to what is now the Kalanagar bus-stop – a pipeline was there, and we would wash our clothes. Now it’s all covered up.”

Almost everything they bought in their earliest years was purchased in paise. Pushpaveni recalls her childhood in Pune, where her father worked in the Khadki ordnance factory as a packer. (Her mother, a homemaker now in her 80s, still lives in Pune.) “For 1 paise we would get a fistful of peas,” she says, the prices perhaps not entirely accurate in her varying recall, but the sense of a time gone by running through the listing. “Gold was 50 rupees a tola and we could still not afford it, a good pure cotton saree cost 10 rupees. My father’s initial salary was 11 rupees and still he would bring back a ghoda gaadi [horse cart] full of rations.” 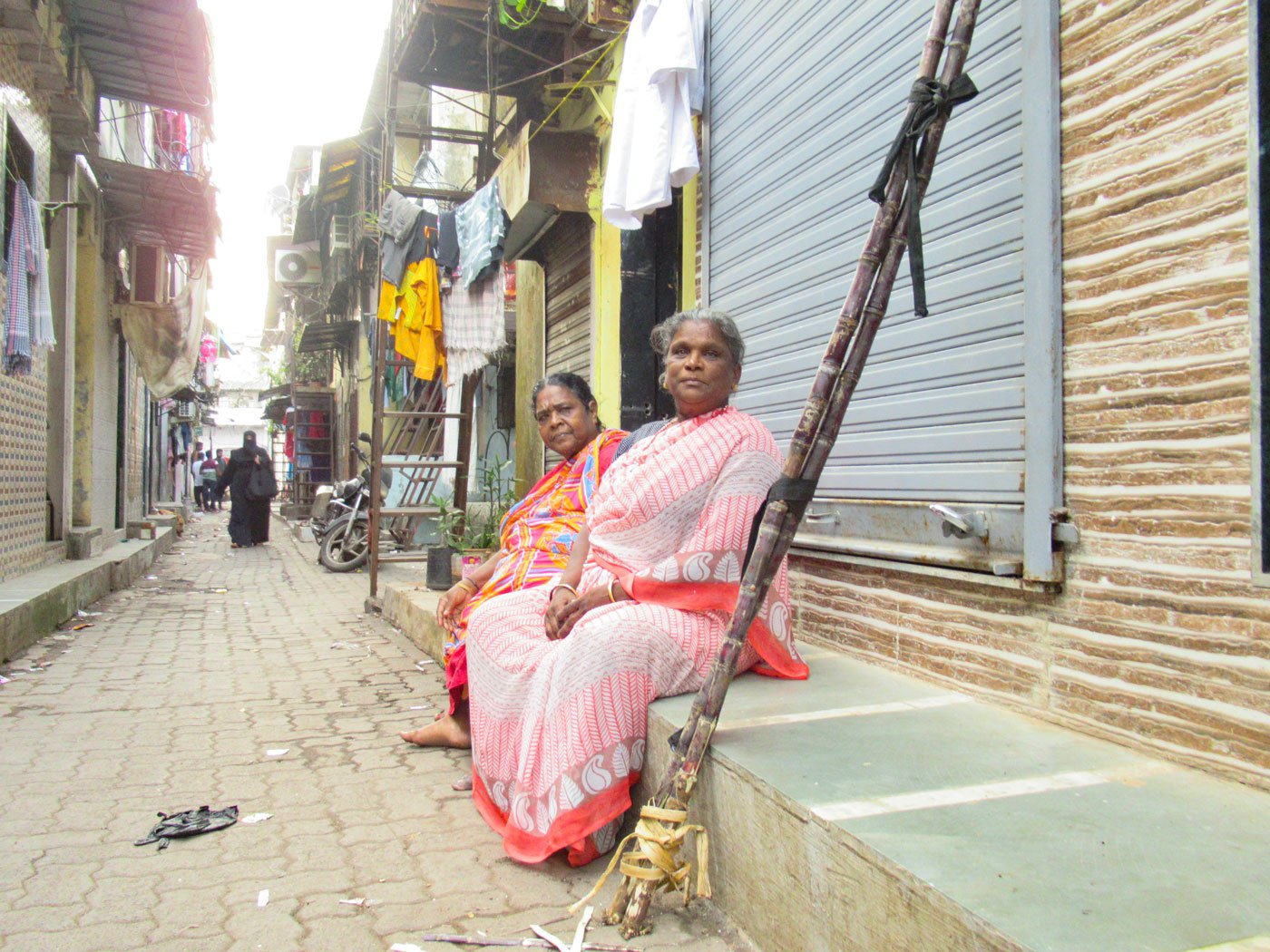 'I’d not left this galli [lane] and gone to live anywhere else' until October this year, says Vasanti

“We managed our sansar [world, existence] on very little – one rupee a day. Vegetables for 20 paise, wheat for 10, rice for 5,” Vasanti recalls. “And still our mothers-in-law would say save 10 paise at least from these daily expenses.”

That prized Lifebuoy soap cost just 30 paise by the time she moved to Dharavi. “It used to be so big, you could not even hold it in your hand. Sometimes, we would buy half for 15 paise.,” says Vasanti.

Her income by the mid-1980s was Rs. 15 a day as a construction labourer at sites across the city. “Wherever I’d get work, I’d run there,” she says. In the first few years after coming to Mumbai from Salem at the age of 17 to live with an aunt, Vasanti worked in soap factories in Sewri and Chakala. “I would pack soap, there was one called Purity then,” she says. She later found a job in a fish-packing unit at Masjid Bunder, and then for several years as a domestic worker in half a dozen homes.

In Tamil Nadu, her father was a police constable, her mother had died when Vasanti was three years old. She studied till Class 10, and has a sharp memory for details. She attributes it to the “ asli maal ” [real stuff] of the past. “We would eat sugarcane straight from the fields near our home, peas, tamatar , amla , all straight from the field. We would throw up a rope and pluck imli [tamarind] and eat it with namak-mirchi .” That is the recipe for her clear memory, she declares, just as Pushpaveni speaks of the coconut-soap application for retaining black hair.

It was at the soap factory in Chakala that Vasanti met the young man who later became her husband. “It was love, then arranged marriage,” she says, a soft smile lighting up her face. “Who does not fall in love in their youth? Then my aunt made all the necessary enquires and it turned into an ‘arranged’ match after three years, in 1979.” 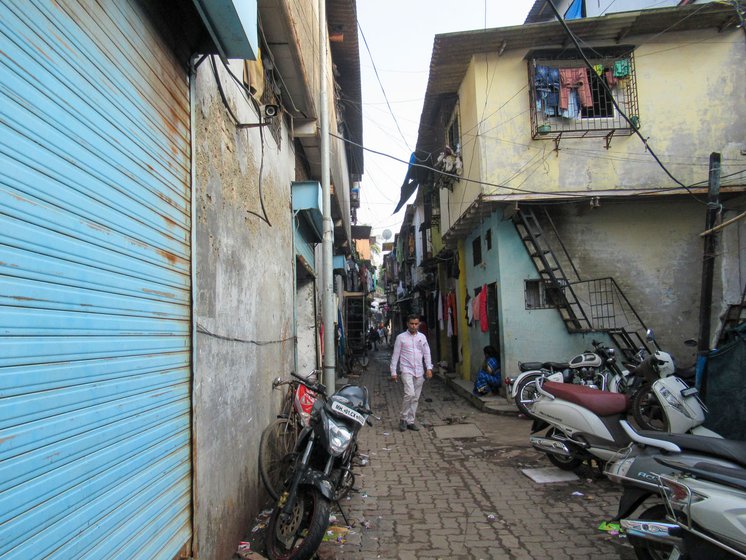 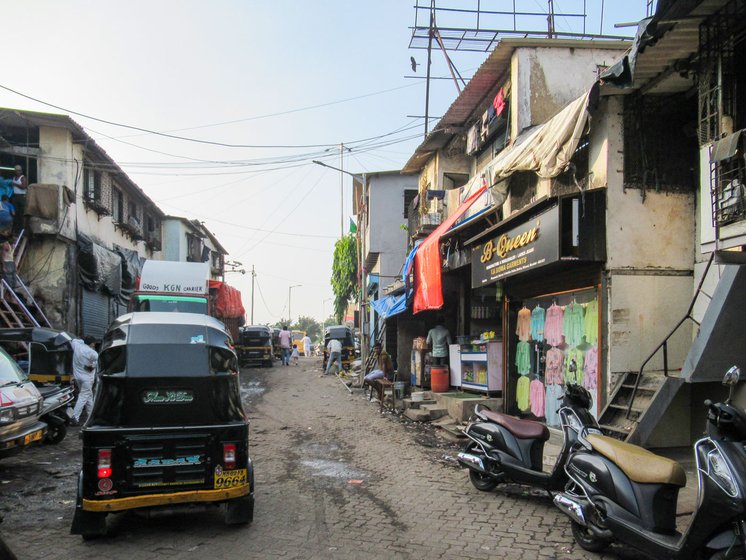 Left: The lane leading to Pushpaveni's room, wider than many in Dharavi. Right: At the end of this lane is the T-Junction

She does not articulate her husband’s name and asks Pushpaveni to speak it out aloud. And then also comes up with a way to tell me herself, by spelling it letter by letter: Aasai Thambi. “He was such a good man,” she says, the love still very much there. “ Itna sona aadmi ,” quiet and gentle. “We had a very happy life together.” And, she adds, “I lacked for nothing even in my sasural [in Chennai]. Not only was my husband a good man, my mother-in-law was good too. I had everything I wanted.”

In 2009, Aasai Thambi passed away. “He would drink, had breathing problems,” Vasanti recalls. “But we had a life together of such sukoon [peace and contentment]… I spent nearly 35 years with him, and can’t think of him even now without crying.” Her eyes moisten as she holds back the tears.

The only child they had, a boy, died soon after birth, “before I even came back from hospital,” she says. “I don’t speak much of this. Pushpaveni’s children are mine too and now my heart goes phad-phad when I think of living away from them in Nalasopara.”

In October this year, Vasanti sold her Dharavi room, while Pushpaveni sold hers a few months earlier, in May. With sky-high prices for land and living space in Mumbai, both managed to get several lakhs, but in a city of extreme expenses those amounts remain a drop in Mahim creek.

Both women take on piece-rate work from some of the many garments’ workshops in the huge manufacturing hub that is Dharavi – earning Rs. 1.50 per piece cutting threads from the loops and legs of black jeans and managing, if they sit for 2-3 hours together, around 50-60 a day; or they stitch hooks on sherwani-kurtas and do other piece-rate work, spreading the clothes out on that blue-white floor in the afternoons. 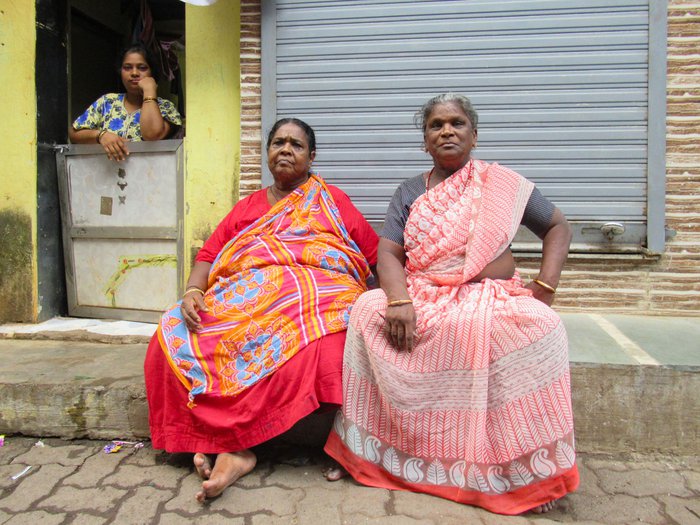 Both women take on piece-rate work from some of the many garments’ workshops in the huge manufacturing hub that is Dharavi – earning Rs. 1.50 per piece cutting threads from the loops and legs of black jeans

Pushpaveni used the money from the sale of her room to take two on a pagdi basis (a co-ownership-rental system) in Dharavi – one each for her sons and their families. She stays with the older son, who is 47 and an autorickshaw driver, his wife, and their three children. (Pushpaveni’s husband passed way in 1999). This ground-floor room includes a small kitchen, and a smaller toilet – it’s a step up for the family.

Her other son, 42, lives in another section of Dharavi; he worked in “sports” she tells me – in exports, it turns out, in local industries. He lost that job during the lockdown, has subsequently been recovering from surgery after a brain haemorrhage, and is now looking for work. Pushpaveni’s daughter is 51 and has four grandkids. “So I am a great grandmother,” she says.

“Both my sons look after me well,” she adds. “And my daughters-in law are also good to me. I have no tension, no complaints. I am well looked-after. It’s a relaxed life for me now.”

Vasanti has used some of the money from the sale of her Dharavi room to make a payment for a room in Nalasopara, some 60 kilometres away. While that is being built, she stays there in a rented room, or occasionally back in Dharavi with Pushpaveni and her family. “My room is getting ready and I like to be nearby,” she says, “so that I can tell them what type of decoration I want – like a kadappa [black limestone] shelf to keep my things. If I am not around, they will do eda-teda work.”

Once that ground-level room is ready, Vasanti wants to start from it a small shop selling biscuits, chips, soap and other items. That will be her source of income. “I cannot do domestic work anymore,” she says, “I am getting older. But even if I am poor, my life is full of sukoon . I have food to eat, clothes to wear, a room to live in. I lack nothing, I have no worries, there is nothing more that I want.”