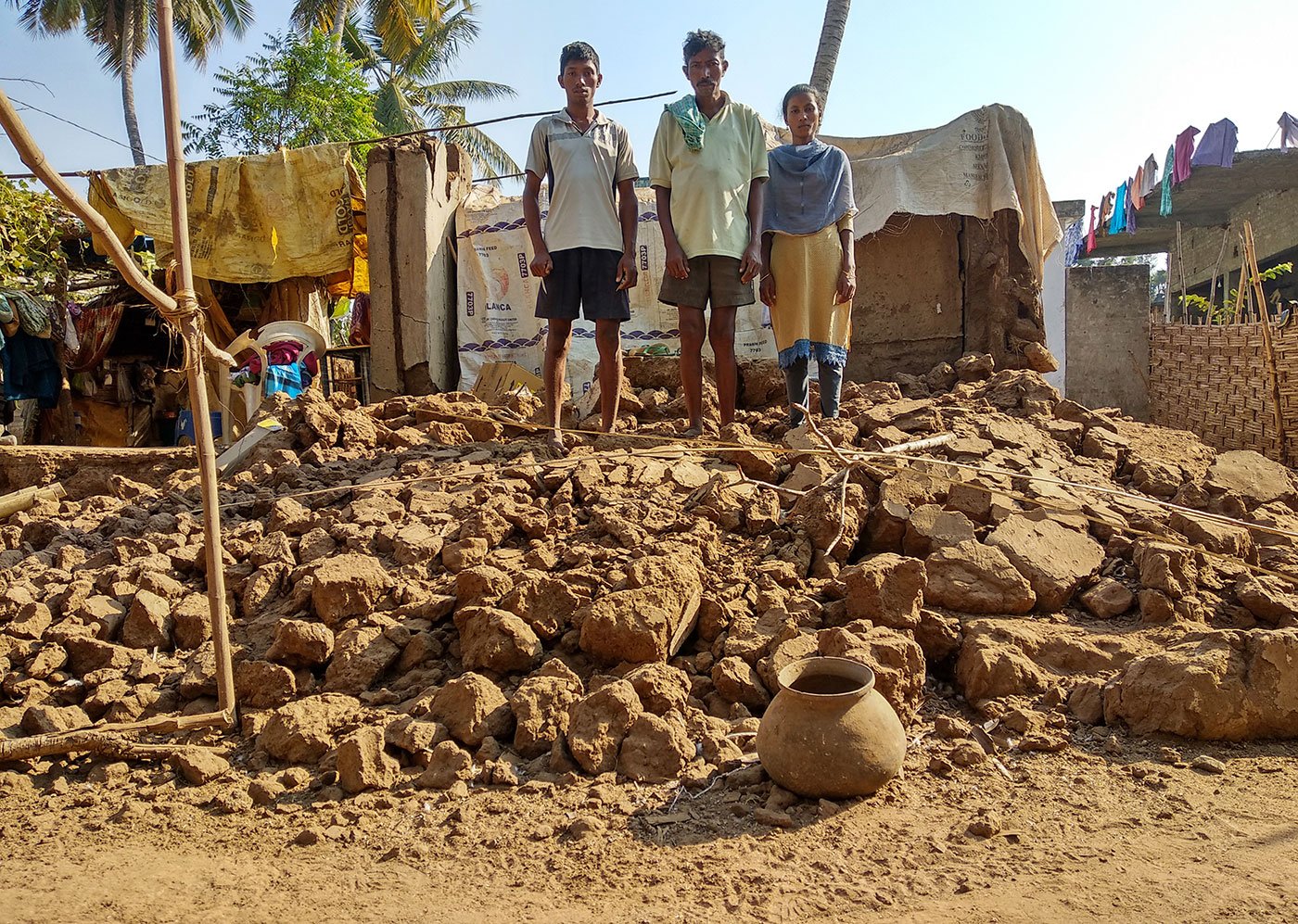 Floods by neglect, flooded by damage and debt

The houses and crops of many Adivasi families in Itukulakota were damaged by flood waters from the Polavaram canal last October. They are still recovering, without any help from the government

Podiyam Bapiraju and his family were staying in a tarpaulin tent when I visited Itukulakota in the last week of February 2018. Their four-room brick-and-mud house had partially collapsed on October 10, 2017, when this village in Polavaram mandal of Andhra Pradesh got flooded.

“We lost utensils, hens, goats [and other items] worth a total of more than 10,000 rupees,” says Bapiraju, 45, a Koya Adivasi farmer. Itukulakota is a predominantly tribal village, home to around 180 Koya families. Bapiraju cultivates two acres of podu (forest) land and has taken three more on a Rs. 10,000 per acre annual lease. “I grow black gram on these five acres. The crop got washed out after the floods and the 70,000 rupees I invested in it in July [2017] has gone down the drain,” he says.

The tarpaulin sheets for the tent cost Rs. 2,500, which Bapiraju bought from Polavaram town, around six kilometres away, after working on nearby farms and saving some money. He and his family spent over a month in the open until then, and cooked and slept next to their damaged house. It was winter and the nights were cold under the sky. Their neighbours – those who had concrete houses that were not damaged in the flood – gave them food and blankets.

When I visited Itukulakota again in mid-April the family – Bapiraju, his wife, 22-year-old son Mutyala Rao, daughter-in-law and 19-year-old daughter Prasanna Anjali – was still staying in the tent, with a makeshift kitchen for cooking and an open bathing area. In December, local trade union activists had put up sheds with asbestos roofs beside the tent, and the family was using both as shelters.

As were 16 other Koya families – the villagers’ counting and my own – who too lost their houses in the floods. 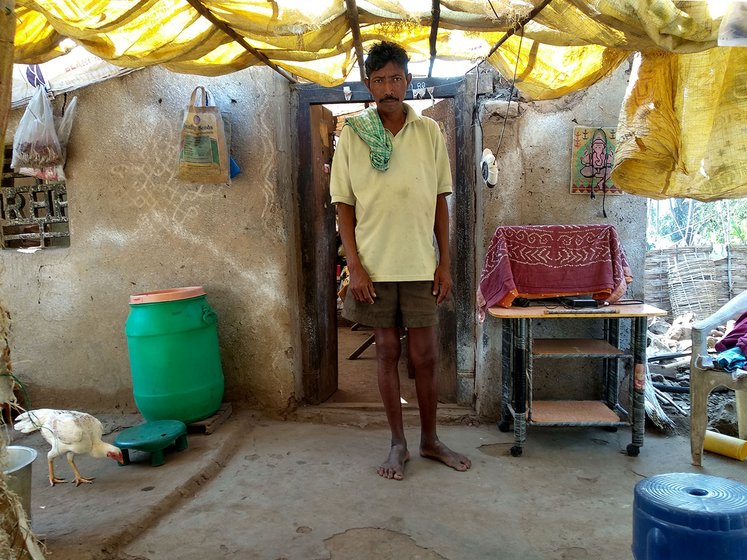 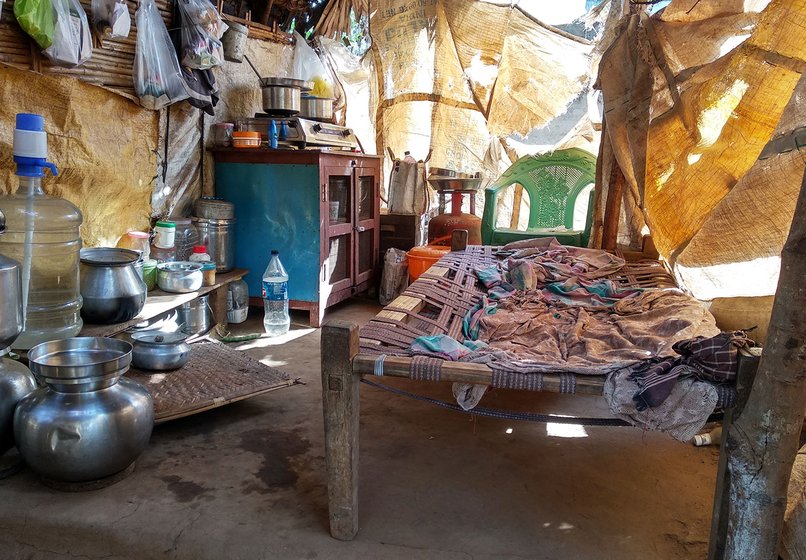 Podiyam Bapiraju in front of his house, which was damaged in the flood. Right: Parts of the broken house are now covered with tarpaulin sheets

The water entered the village thrice in a span of 10 days between October 2 and October 12. The first and the third floods were minor, but the water that swept through Itukulakota on October 10 caused huge losses. It rose to around three feet, and mercifully, there were no deaths, because the people climbed on to the roofs of the concrete structures in the village.

The 174-kilometre long Indirasagar (Polavaram) Right Canal, which runs through West Godavari and Krishna districts, was completed in 2015-2016.  Itukulatota is located at the foothills of the Papikondalu mountain range. The village is the starting point of the canal, which takes water from the Godavari river basin to the Krishna river basin. Two streams, one from Metthappakota and another from Sunnalagandi (both hamlets of Chegondapalle  village), which are on the top of the hills, flow down and join each other just before reaching Itukalakota. This larger stream then joins the Polavaram Right Canal at Itukulakota.

Six conduits facilitate the joining. Conduits are openings which allow water to flow freely from the stream to the canal.  In the monsoon of 2016, the conduits were not clogged and there was no flooding.

But this changed rapidly. “Four conduits are completely blocked and the other two are partially blocked with plastic, which is the primary reason of the floods,” says Siva Ramakrishna, 58, a farmer in Itukulakota, whose house was not affected by the flood.  Most of the plastic, the villagers say, is garbage from the villages upstream of Itukulakota. 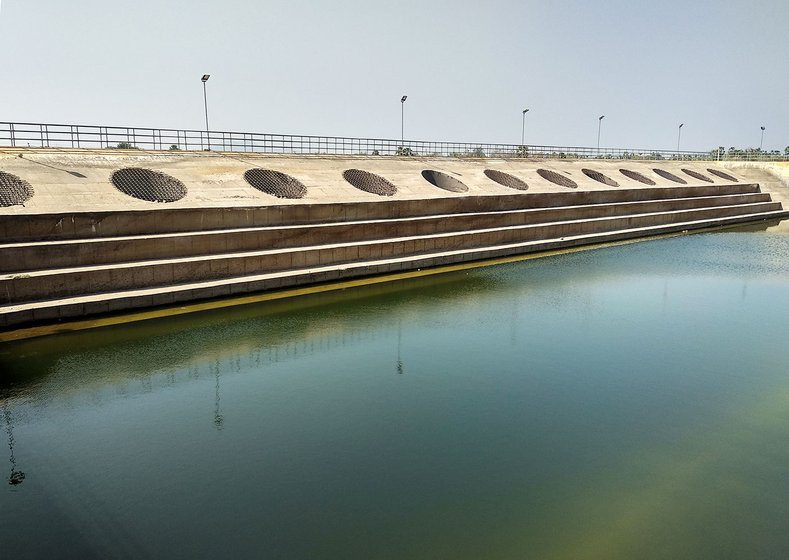 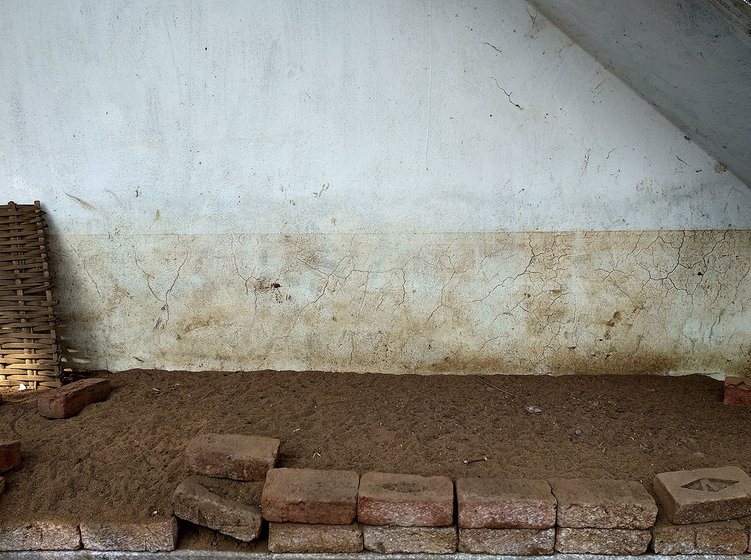 Itukulatota is the starting point of the Polavaram Right Canal on the Godavari river. Right: The flood water level can be seen on a wall in the village

“The floods and thereby such huge material loss could have been avoided if the irrigation department and the Polavaram project people [the Water Resources Department] had acted with some responsibility and cleaned the conduits after the small flood earlier that month,” adds Ramakrishna,  who is also an activist with the Communist Party of India, Marxist, and from the only non-Koya family in the village.

Madakam Lakshmi, a 38-year-old widow, also lost her house in the flood. In the first week of November, she got tarpaulin sheets for Rs. 2,000 from Polavaram town. “I pitched a tent on the terrace of the adjacent building. My neighbours are generous, but I can’t stay there forever,” said Lakshmi when I met her in February. Lakshmi’s one acre farm on forest land is her only source of livelihood. Her maize crop was completely damaged in the flood.

“I stopped going for ‘employment labour’ [MGNREGA work] too because they are not paying after getting the work done. They owe me 7,000 rupees. We have protested numerous times near the Mandal Development Office [in Polavaram town], but no one cared,” she adds. Lakshmi is hoping to rebuild her house with the money due to her, and has also slowly begun cultivating her forest land again.

Besides the 17 houses that fell, more than 20 were partially damaged. “The ayacut [total cultivation area] of the village is 300 acres, of which crops on more than 150 acres were lost,” estimates Tama Balaraju, 50, a tenant farmer who grows green gram and black gram on his leased land. “Five months later, we haven’t got a single rupee of compensation from the government,” adds Podiyam Balaraju. 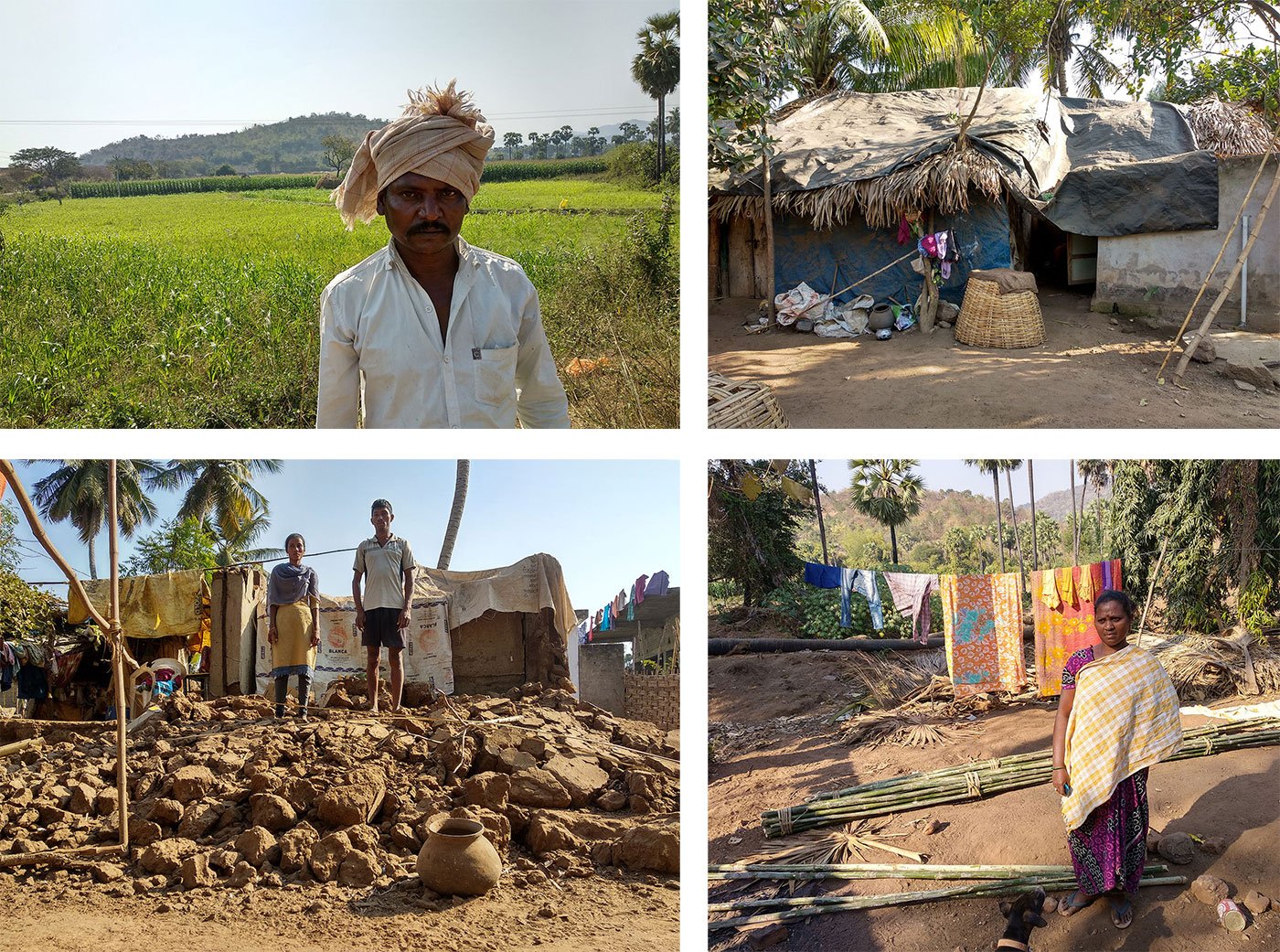 Tama Balaraju's slowly started cultivating maize again after the flood water receded (top left), and is living with his family in this re-built hut (top right). Bottom left: Podiyam Bapiraju's children at the ruins of their house. Bottom right: Madakam Lakshmi on the plot where her house stood, which she cannot afford to rebuild

Besides household items, Balaraju lost a buffalo worth Rs. 50,000 and 10 hens. “In all, some 25 goats, 150 hens, utensils, clothes and other items which disappeared from the village in the flood waters were found near the conduits [floating, some 300 metres away] when the water receded,” says Balaraju.

Still reeling from the losses, the indifference of the state administration has added to the villagers’ distress. “All the government did to address the problem which arose because of their inaction [the blocking of the conduits] was serve us food for a day,” says Balaraju. When the tribals demanded the Revenue Divisional Officer (RDO) and the Mandal Revenue Office (MRO) give them compensation – help rebuild their houses and give at least Rs. 10,000 to each family – the officials cited a little-known rule that flood water has to stay for at least three days for villagers to become eligible for compensation.

When I asked the (then) MRO to direct me to this rule, he replied, "The government issued state rules for the Disaster Management Act, 2005, through a Government Order." When I asked him the order number and the year in which it was passed, he said, "I don't have time to check and tell you now." When I spoke to the new MRO, Suresh Kumar, he said, "All the issues have been sorted out by the previous MRO, and there is no file pending in the office regarding this issue."

Members of the 180 Koya families encircled the MRO when he came to visit on October 11; that evening, their protests forced the government to give 10 kilos of rice to each family. “We were in such deep trouble and they give us 10 kilos of rice to wipe our tears?” asks Bapiraju. His son Mutyala is recently married and doesn’t have a ration card. “This was enough reason for the officials to deny the 10 kilos of rice for my son,” adds Bapiraju. 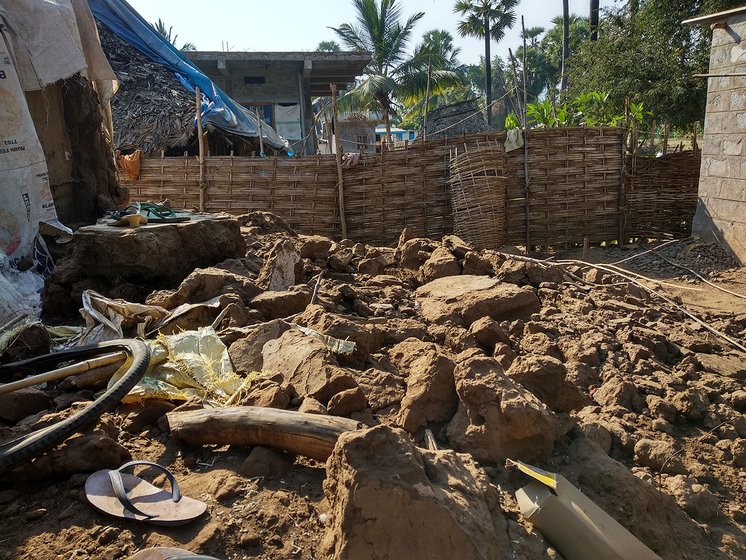 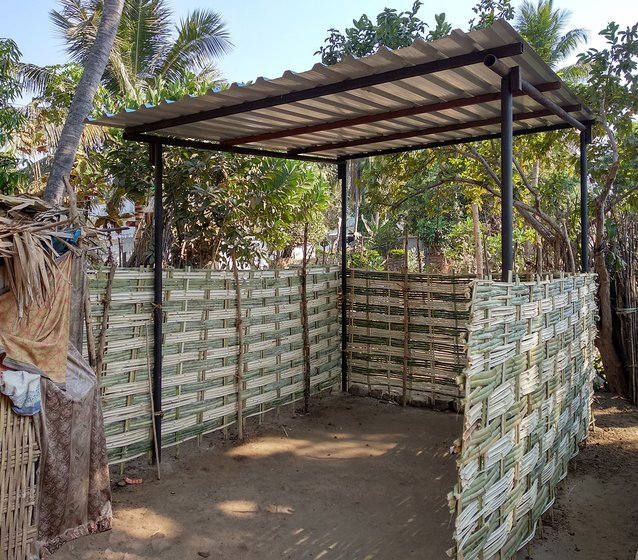 The ruins of Bapiraju’s house (left); many families shifted into tents or sheds such as these (right) given by the Visakhapatnam Steel Plant Employees Union

Mudiyam Srinivas, the Telugu Desam Party MLA (member of the legislative assembly) from the Polavaram constituency, a Koya himself, visited the village on October 25. He gave promises to the villagers and left in 15-20 minutes. “We were so frustrated with the officials… ” says Balaraju.

While the government remained distant, some organisations and individuals stepped in and helped the victims. The Visakhapatnam Steel Plant Employees Union, affiliated to the Centre for Indian Trade Union, donated Rs. 3 lakhs worth of asbestos sheds for the 17 families whose houses were completely destroyed.

“I had to take a loan from private moneylenders to start the crop afresh after the washout,” says Bapiraju. Like many other Adivasi farmers, he doesn’t have a loan eligibility card (LEC) or a forest land patta , which could have given him access to institutional loans. The Forests Rights Act of 2006 recognises the right of Adivasis to till forest land, and mandates that the forest department give land titles for the tribal cultivators. And the Andhra Pradesh Land Licensed Cultivators Act, 2011, says that the revenue department must give an LEC to all tenant farmers so that they can get institutional loans. In the absence of both, over the years, Bapiraju has accumulated loans of Rs. 2 lakhs at a crushing interest rate of 36 per cent.

He saved a bit on the black gram crop he planted in December and harvested in March 2018, and plans to rebuild his house from that money. He will have to wait for a year or two to repay the loans. By then, he might be further in debt. And the village could flood again after the next monsoon.